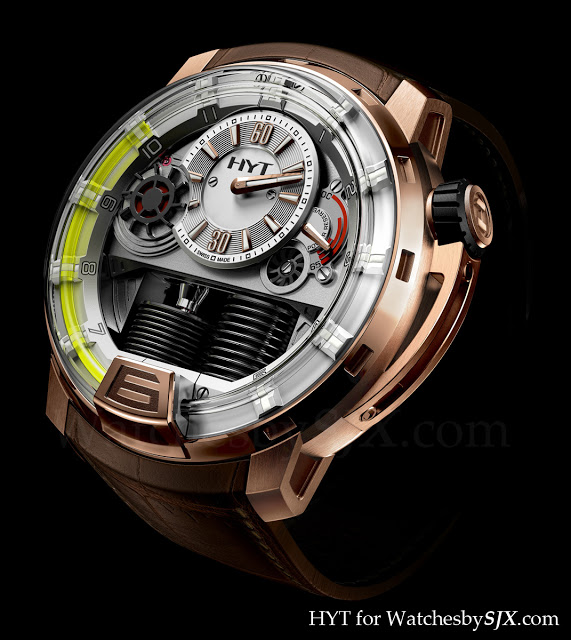 ﻿This was announced in January and previewed here, and now at Baselworld 2012 it has finally be officially launched. Using liquids to indicate the time, the hydro-mechanical HYT H1 is one of the most interesting watches of the fair so far.﻿ ﻿﻿﻿﻿

The idea behind it is simple. The clear tube running along the circumfrence of the dial has two immiscible liquids inside, one clear and the other a fluorescent green.

The meniscus of the two liquids indicates the hour and as the hours pass, the meniscus travels forward clockwise. This is thanks to two bellows, made from a flexiable alloy, which are driven by pistons, situated at six o’clock. Once the meniscus hits six o’clock, it quickly rushes back to six on the other side, like a retrograde hand, and starts over. (A video at the end of this post illustrates the concept nicely.) As for the rest of the dial: at nine o’clock on the dial sits the seconds hand which resembles a water wheel. Adjacent to it is the minutes display and then at three o’clock is the power reserve indicator.

This is a large watch at 48.8 mm wide and 17.9 mm thick. The domed sapphire crystal alone is 5 mm thick, because it has to accomodate the tube containing the two liquids. The movement runs at a conventional 28,800 bph and has a respectable 65 hour power reserve. The H1 is a very intriguing idea, and one that will be exceedingly interesting if it works as planned. There are so several things I can think of that might go wrong, like the fluids mixing or evaporating, though HYT says all of these have been addressed. And as has become the norm in independent watchmaking, thanks to Max Büsser’s “friends” concept of listing each and every person involved in the creation of his Machines, HYT has revealed the identities of all the key individuals behind the company. To realise this novel mechanism required two teams, led by from Audemars Piguet COO Bruno Moutarlier. The group comprising Jean-François Mojon and his company Chronode SA worked on the watch movement, while the other team made up of HYT’s founders, Patrick Berdoz, Lucien Vouillamoz and Emmanuel Savioz, in a company known as Preciflex, dealt with the fluid mechanics. It was Mr Vouillamoz came up with the idea of a hydro-mechanical watch in 2002. And the latter group had the advice of Helbling Technik, a technical consultancy with experience in medical devices which use fluids. Interestingly several of the people involved in HYT have medical technology backgrounds. Mr Berdoz founded and sold prosthetics company Precimed, while board member Michael Orsinger is a senior Novartis executive. And HYT itself is led by Vincent Perriard, formerly the CEO of Concord and then Technomarine. While at Concord Mr Perriard experimented with a liquid power reserve display in the Concord C1 Quantum Gravity tourbillon, which was an enormously expensive; only a handful were made before its maker, BNB Concept, went bust.

Another notable figure in HYT is Dr Ernst Thomke. Best known as one of the key figures (or maybe the key figure) in the creation of the Swatch watch, he was also formerly the CEO of ETA SA and SMH (the predecessor of Swatch AG). According to HYT, the H2, H3 and H4 are already in the works. If the H1 takes off, we should be see the rest soon enough. – SJX