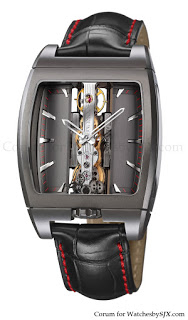 Corum’s Golden Bridge, the brand’s iconic watch originally developed by Vincent Calabrese, was once legendary for its poor reliability. But it has undergone a tremendous makeover in recent years. Reengineered by Laurent Besse of the now defunct Les Artisan Horlogers, who amongst other things helped develop the MB&F HM4 Thunderbolt, the Golden Bridge became the Ti Bridge and then this year it was offered in automatic form. Wound by a linear weight, like the TAG Heuer Monaco V4, a unique version of the Golden Bridge Automatic is being contributed to Only Watch 2011 by Corum.

This unique piece is housed in a Titalyt coated titanium case with red accents on the strap. Only aesthetic changes versus the regular model but attractive nevertheless. I examined and photographed the regular version of the Golden Bridge Automatic some weeks ago and will be posting my photos of it soon. – SJX