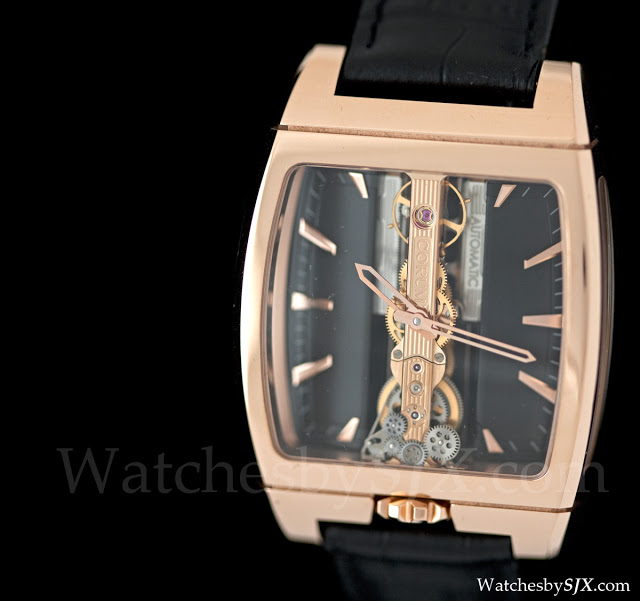 First conceived by independent watchmaker Vincent Calabrese in 1980, the Golden Bridge has since become the quintessential Corum timepiece. Equipped with a long, thin baguette movement, the Golden Bridge is now available in a variety of forms and sizes, but always retains its original movement form. In recent years Corum has begun to tighten its product line and now its website lists just the Admiral’s Cup, Golden Bridge and vintage-inspired Heritage lines. The most interesting is the Golden Bridge, so named because the movement is laid out in a straight line, secured by a long, 18k solid gold bridge. In my mind Corum has traditionally been the maker of individually memorable and often quirky watches, but without a strong brand identity overall. This was the case when the brand started and continued even after it changed ownership. The Rolls-Royce watch, Bubble, Admiral’s Cup and Golden Bridge spring to mind, as do the skull-themed (“vanities”) watches so favoured by the late owner Severin Wunderman, who bought Corum in 2000. Despite all of those unusual timepieces, the Golden Bridge still remains it signature.

Originally conceived by AHCI co-founder Vincent Calabrese in 1980, the Golden Bridge a variation of a Calabrese’s specialty of form movements; he has created other movements in various shapes including letters and animals, and even a flying tourbillon movement. However, the original Golden Bridge was delicate and not especially reliable. That has since been rectified and owners of the current Golden Bridge watches report much better performance. The reengineering of the Golden Bridge was done by Laurent Besse and his firm Les Artisans Horlogers which was subsequently acquired by Corum after it went bust. Another well known project of Mr Besse is the MB&F HM4 Thunderbolt.

Aside from the movement the Golden Bridge has seen significant design evolution as well. What was originally a slim movement in a large case with sapphire crystal front and back, resulting in an almost transparent watch, now has a dial. The wrist below the movement is no longer exposed. Only the Miss Golden Bridge for ladies is mostly see-through. The addition of the dial means the ethereal character of the original Golden Bridge has been lost, though the current design is much more masculine. Corum now offers an automatic Golden Bridge (shown below), unveiled at Baselworld earlier this year wound by a weight travelling on a linear track. I am unsure of the winding efficiency of this mechanism though. And a few years back the brand unveiled the Ti Bridge, a modern take on the original concept with the movement sitting horizontally and supported by v-shaped struts. This year Corum presented the Ti Bridge Power Reserve which sees the addition of a reserve de marche indicator on the right of the dial. The power reserve arrow looks somewhat like an afterthought and seems somewhat out of place. Amazingly enough the Golden Bridge has been around for 31 years and it has not changed very much. With the resources Corum is putting into developing this line it will be interesting to see how it evolves further.