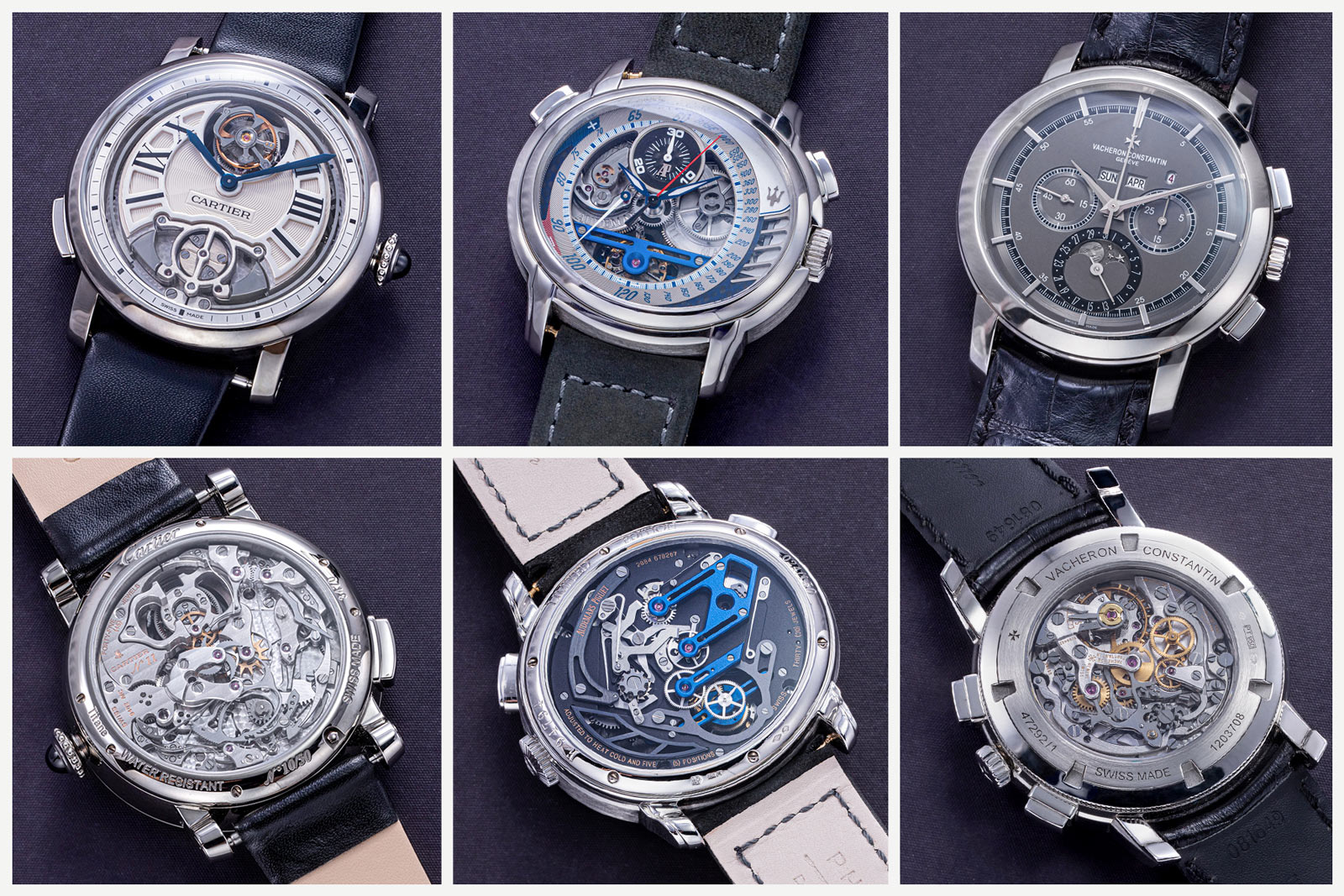 Having rounded up a few highlights from the independents at the Phillips’ upcoming Hong Kong watch auction taking place on May 27 and 28, we now turn to the notable complicated watches.

We selected five watches, most of which are exceptionally complicated and extremely expensive when they were new, making them value buys today. These include lesser known watches from major brands, such as as the Rotonde de Cartier Minute Repeater Flying Tourbillon and the Audemars Piguet Millenary Minute Repeater with an unusual direct-impulse escapement.

And the selection also includes a unique Patek Philippe ref. 3974 with a dial bearing Breguet numerals and an unusual Calatrava cross (which won’t likely be a value buy unfortunately).

Registration for bidding and the full catalogue for The Hong Kong Watch Auction: XIV can be accessed here. 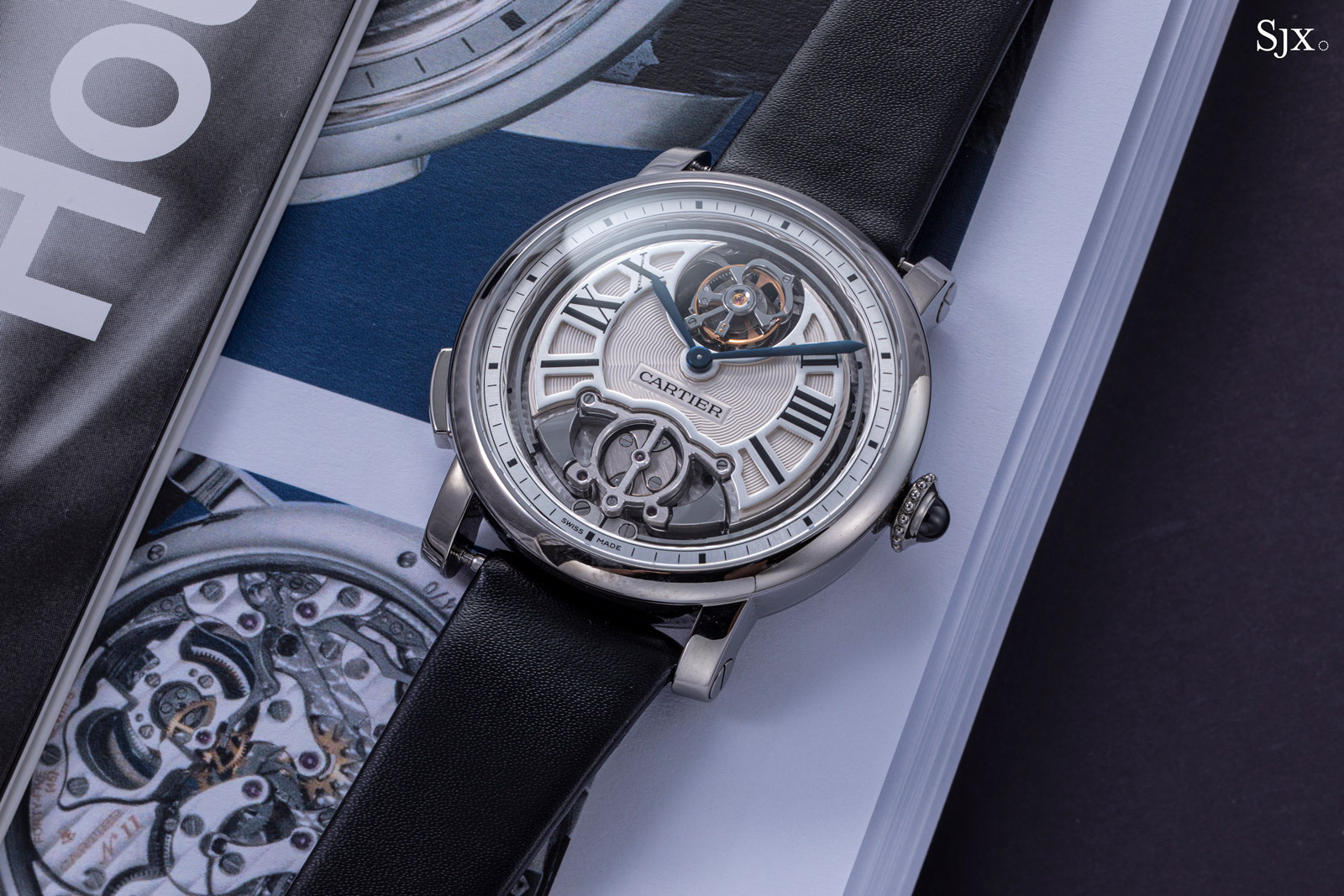 Cartier’s modern-day venture into high horology was at its most ambitious with the Fine Watchmaking collection launched in 2008, which included various creative complications such as the range of mystery watches.

But amongst the most complicated watches in the collection was Rotonde de Cartier Minute Repeater Flying Tourbillon, a complicated watch executed in a classical style. But the movement was constructed in an unconventional manner with most of the mechanics inverted so that the repeater gongs and hammers are visible on the dial. And the calibre also incorporates technical innovations that enhance the loudness of the repeater chimes. 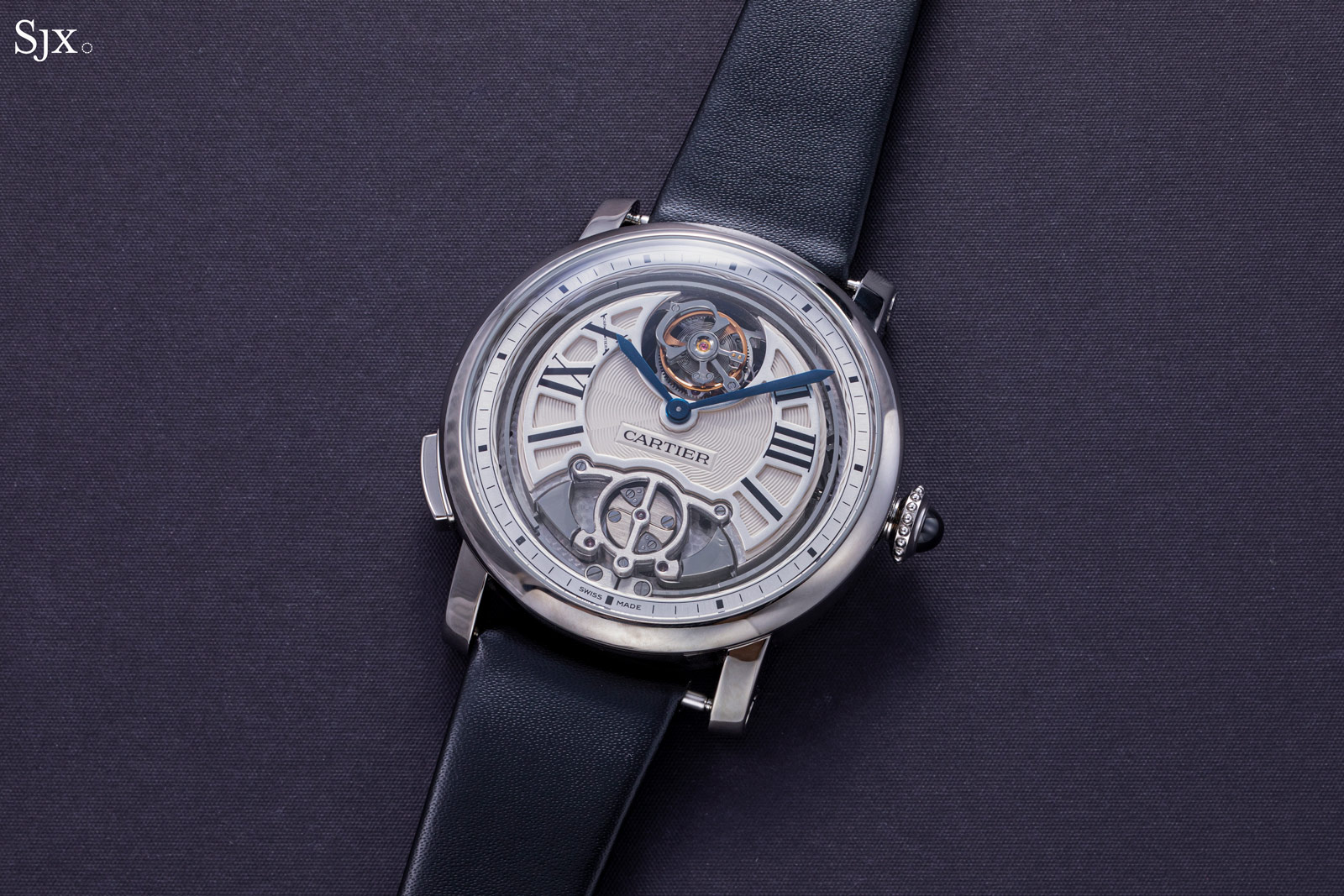 Introduced in 2011, the Rotonde repeater was the brainchild of Carole Forestier-Kasapi, then technical head Cartier’s watchmaking division and the creator of most of its highly complicated watches (including this year’s Masse Mysterieuse). The watch is typical of her many creations – inventive, accomplished, and also quite large.

It certainly makes an impression in the metal, both visually and acoustically. The case is 45 mm, but fortunately lightweight because it is titanium.

But the case metal also serves to boost the sound of the repeater, which was the focal point during the development of the movement. Much research went into the resonance and reverberation of the chimes, as well as their tone and volume. Among the result of that research is the hollowed out case with a button instead of slide for the repeater, which was done to minimise the mass of the case. 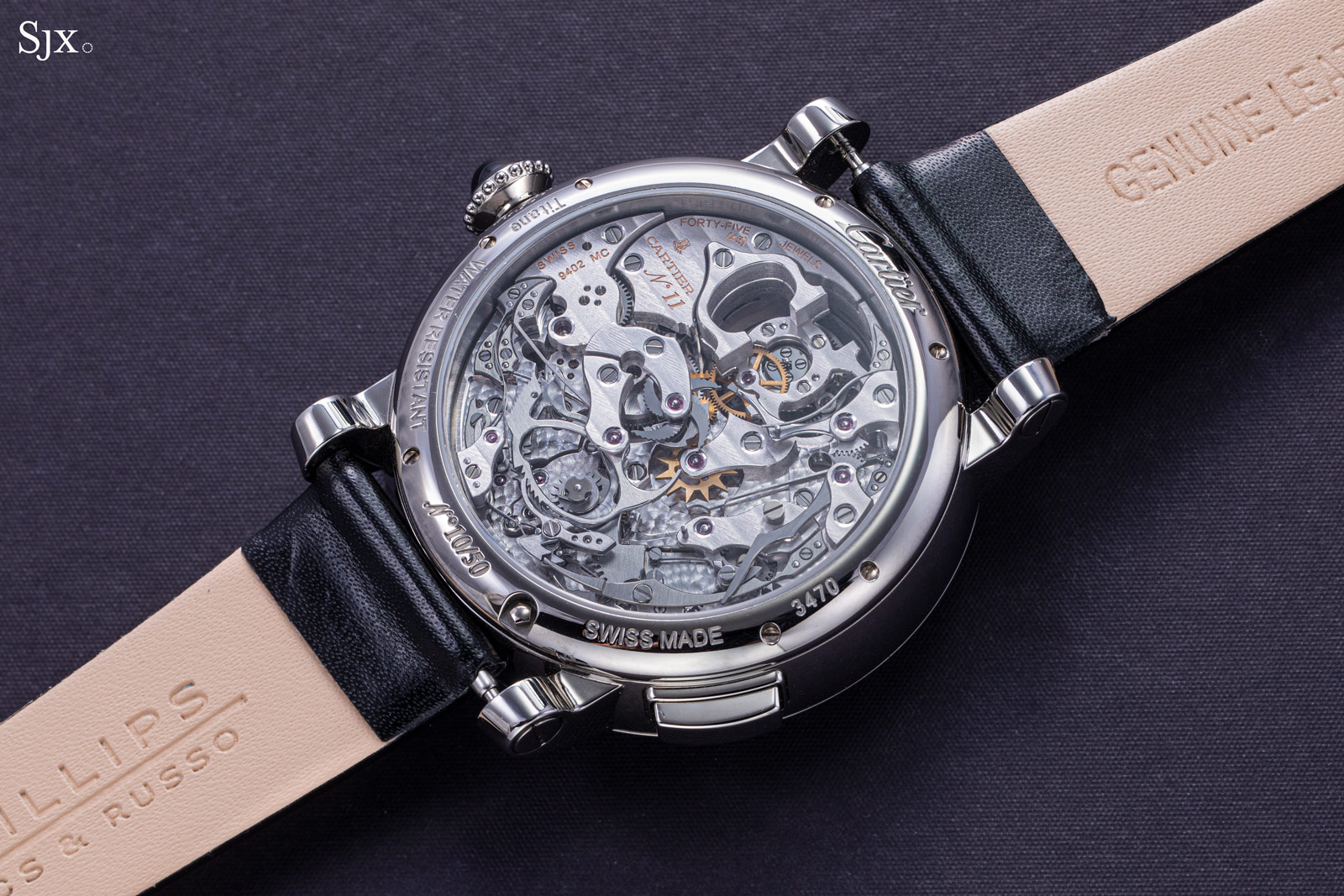 Like all Cartier complications of the period, the repeater bears the Poincon de Geneve quality hallmark 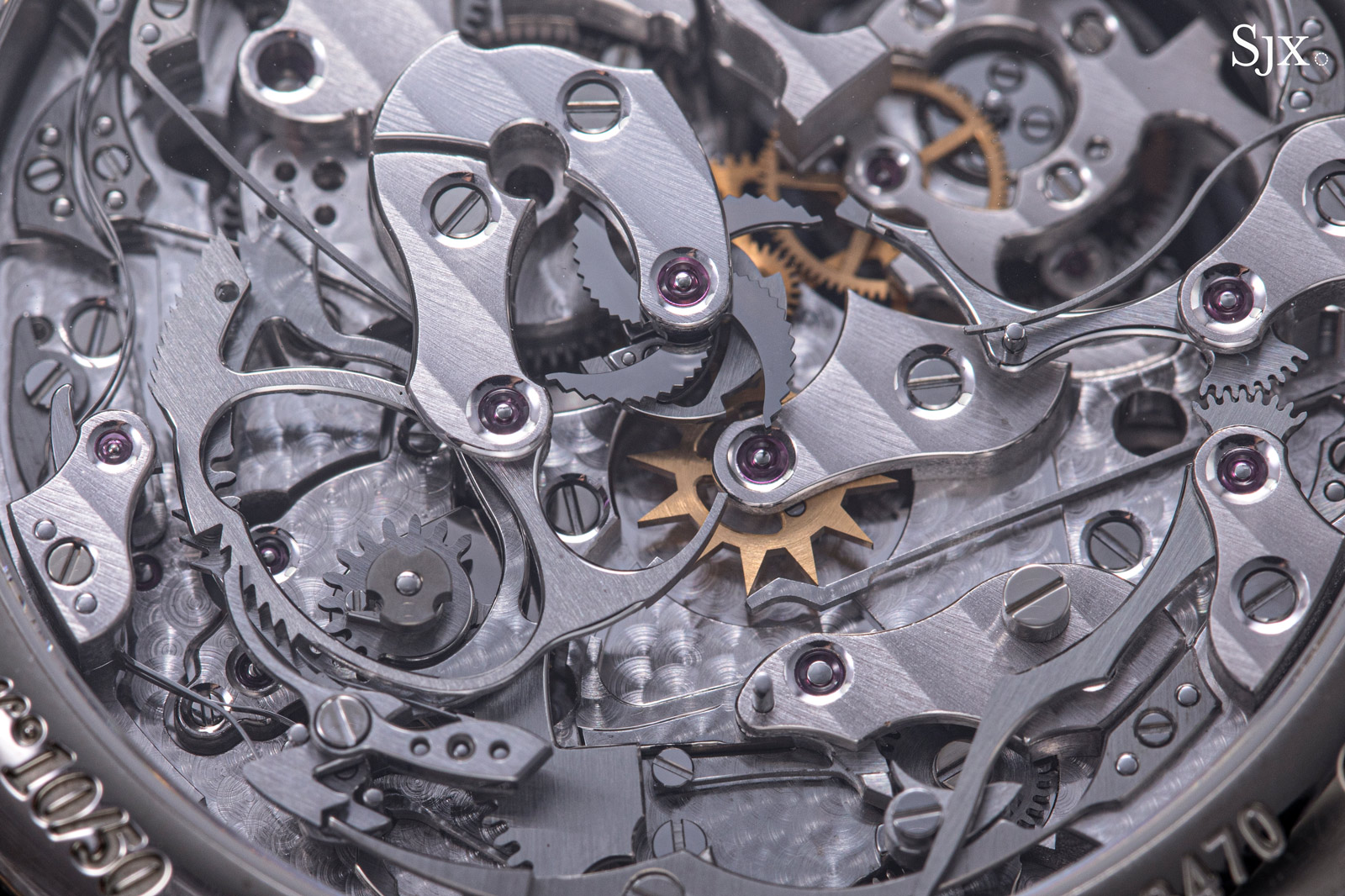 In terms of the design the dial is done in the aesthetic that defined the Fine Watchmaking line, which means a raised, open-worked chapter ring for the hours sitting on a guilloche base and, of course blued steel hands. The dial is laid out symmetrically with the hammers and governor at six o’clock balanced by the flying tourbillon at 12. 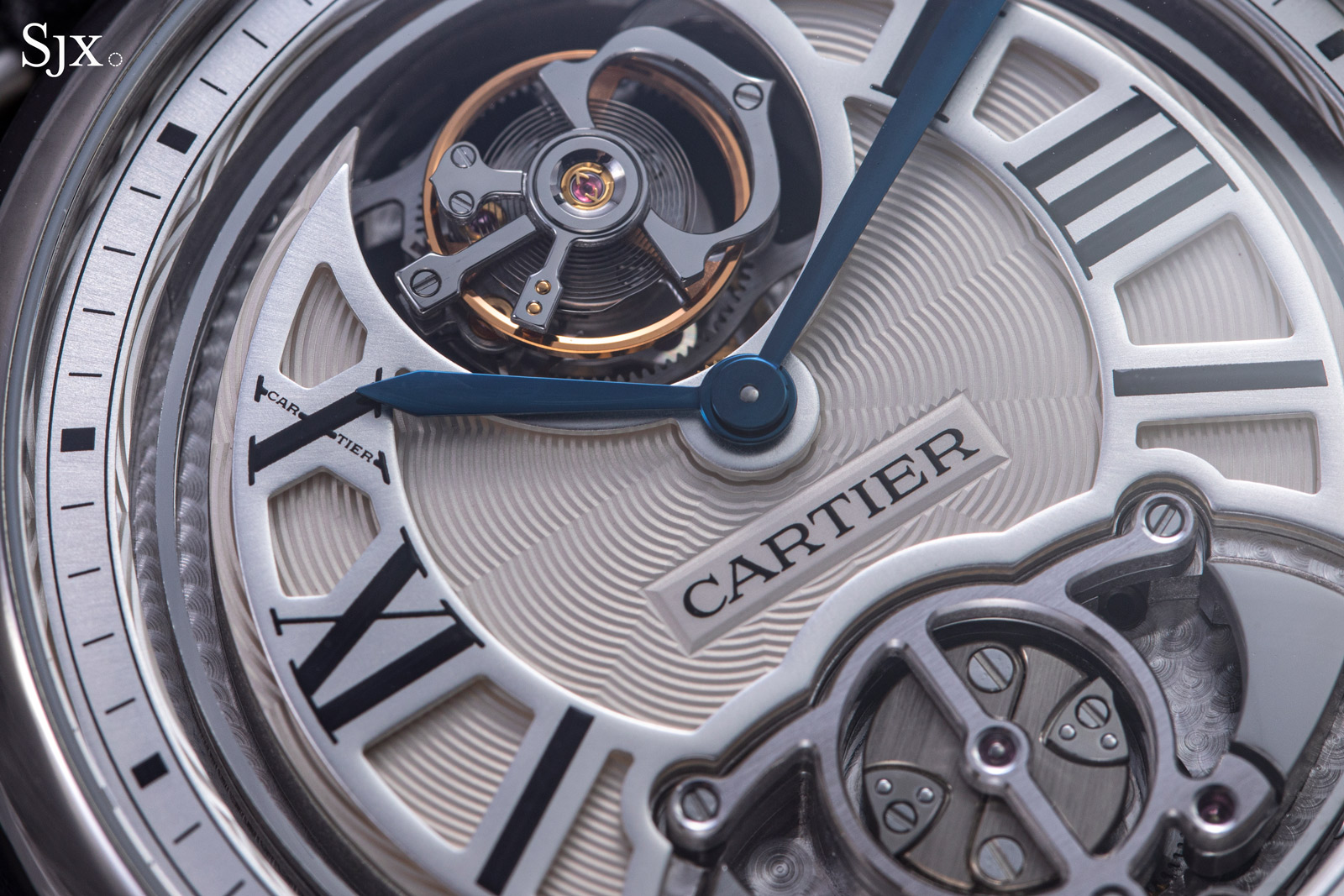 Perhaps the most impressive chiming watch in the sale on basis of rarity and reputation is the Patek Philippe ref. 3974 perpetual calendar minute repeater. Not only does it come from the benchmark of repeater manufactures, this ref. 3974 also has a unique, special-order dial. And while such dials are often only subtly different from the standard versions, this dial makes its status clear in several ways, most obiovusly with the large Calatrava cross under 12 o’clock. 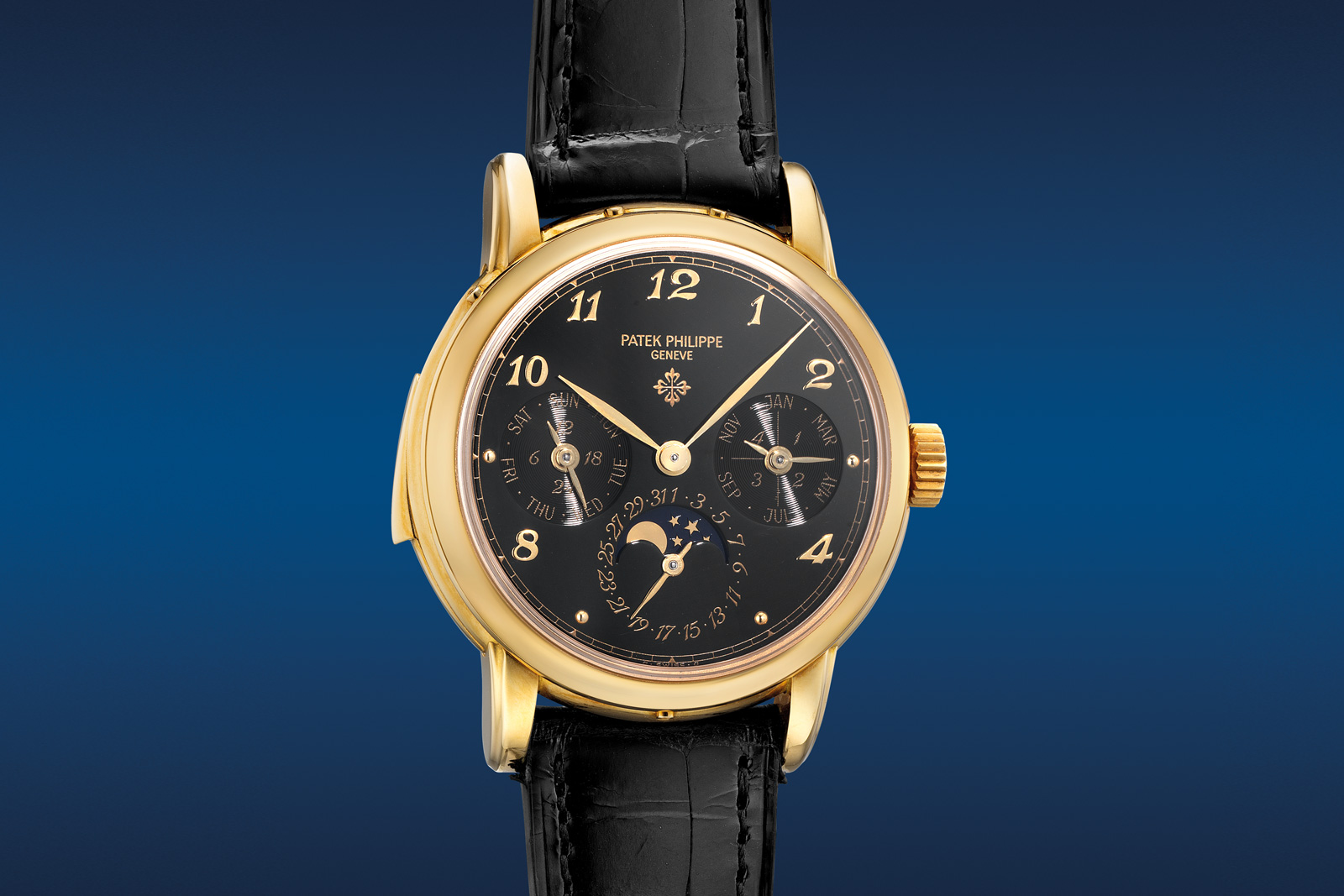 Its origins also explain the elegant case size of just 36 mm, the norm for the period. The case exudes charm with its compact size accompanied by beautiful lines and details. Notably, the case was made by Jean-Pierre Hagmann, the noted case maker now working for Akrivia, whose hallmark sits on the lower left lug. 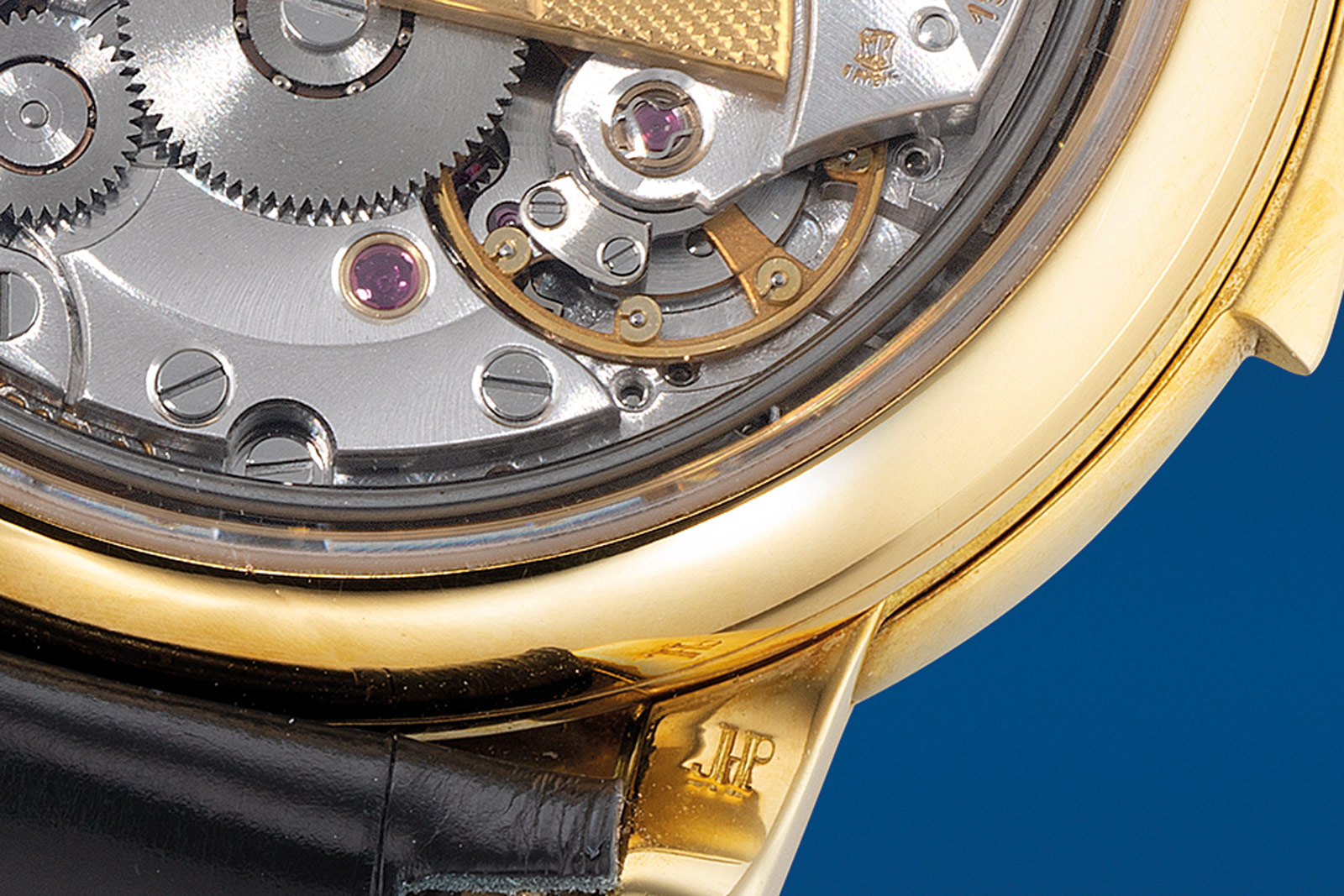 But this is truly special because of the dial, which is “possibly unique” according to Phillips but in all likelihood entirely unique. While the standard ref. 3974 has dauphine hands and baton markers, this has a black gilt dial with Breguet numerals and leaf hands. Even more intriguing is the fact that all the numerals on the sub-dials are also done in the Breguet style.

And the there’s the Calatrava cross, which is ordinarily found only on other components of the watch and almost never on the dial. Its size means the cross is not be for everyone but is unquestionably one-of-a-kind.

The combination of the black gilt dial and yellow gold case elevates this one of the most beautiful versions of the ref. 3974. 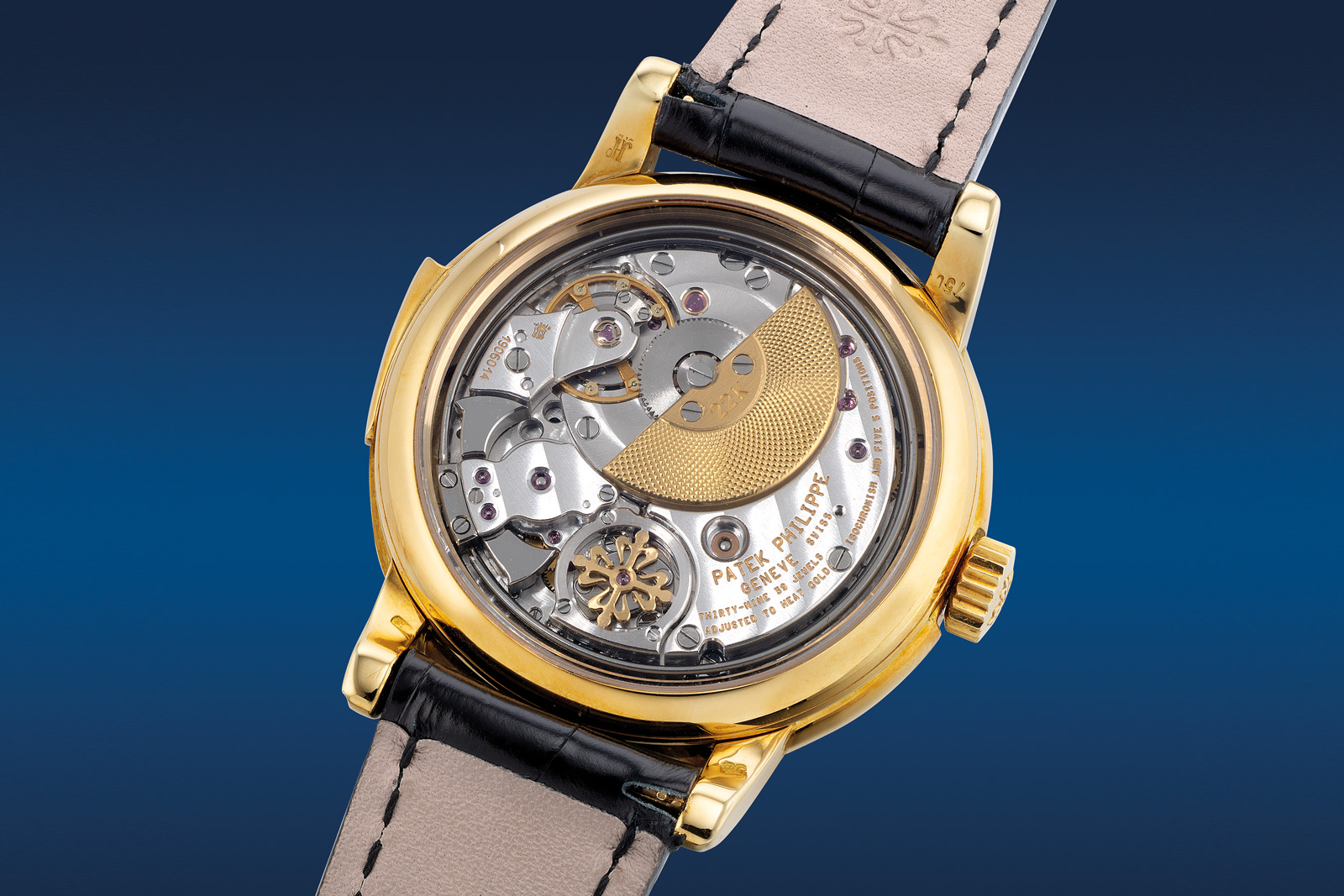 The open-worked Calatrava cross above the governor, the traditional location for the emblem on Patek Philippe’s repeating watches

This watch was last sold at auction by Phillips in 2016, where it achieved CHF1.18 million including fees. At that time its boxes, certificates, and additional solid case back. Unfortunately all those accessories have been lost, but fortunately the watch remains in the same crisp condition.

Another chiming watch in titanium is the Audemars Piguet Millenary Minute Repeater ref. 26371TI. But in contrast to the Cartier above, the Millenary repeater incorporates advanced engineering in the form of its AP Escapement and twin hairsprings.

The Millenary line was introduced in 1995 but never caught on despite AP’s best attempts. It was discontinued not too long ago and has now entered the history books. But it remains an interesting proposition for complicated watches because AP installed several notable movements in the ovoid case. 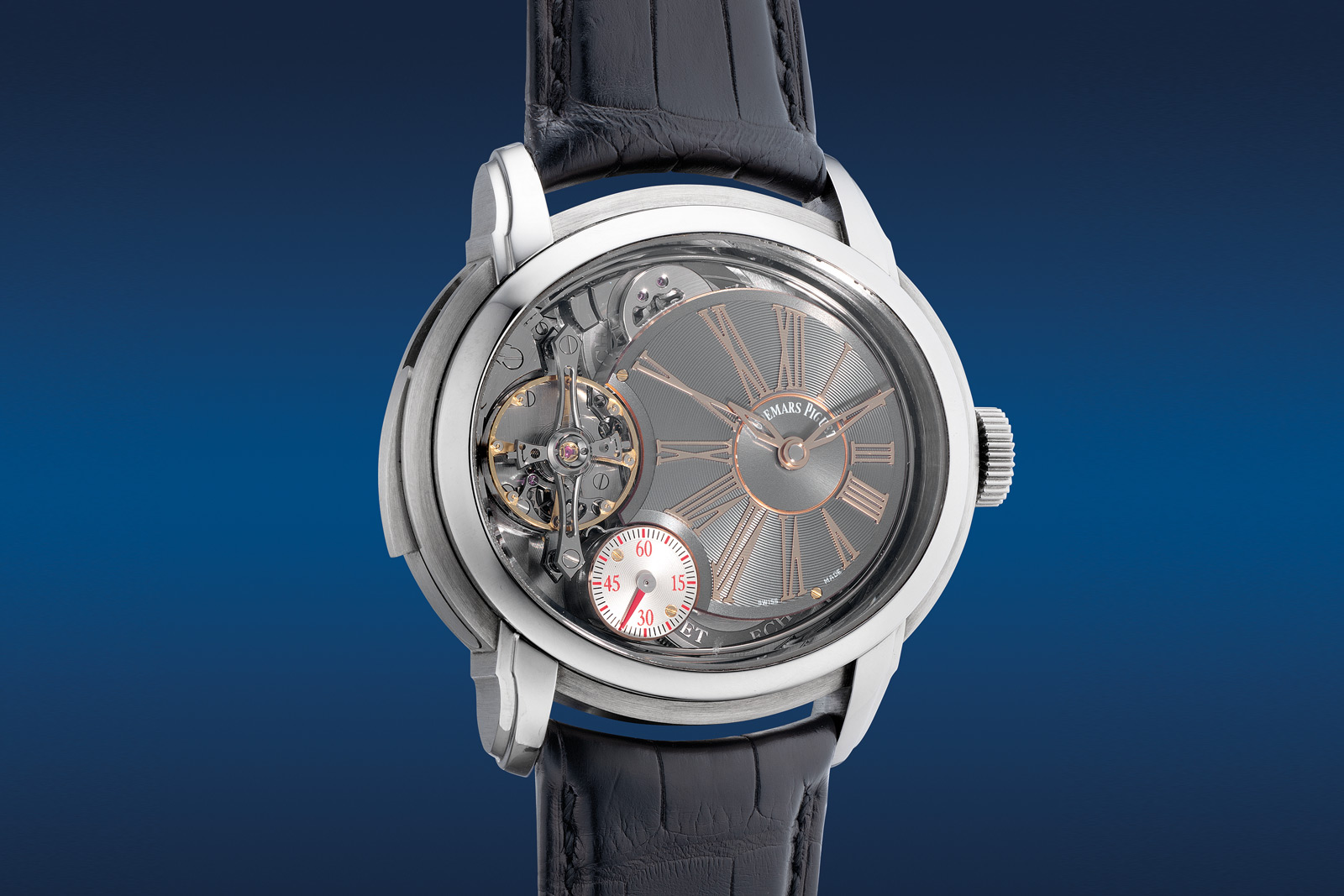 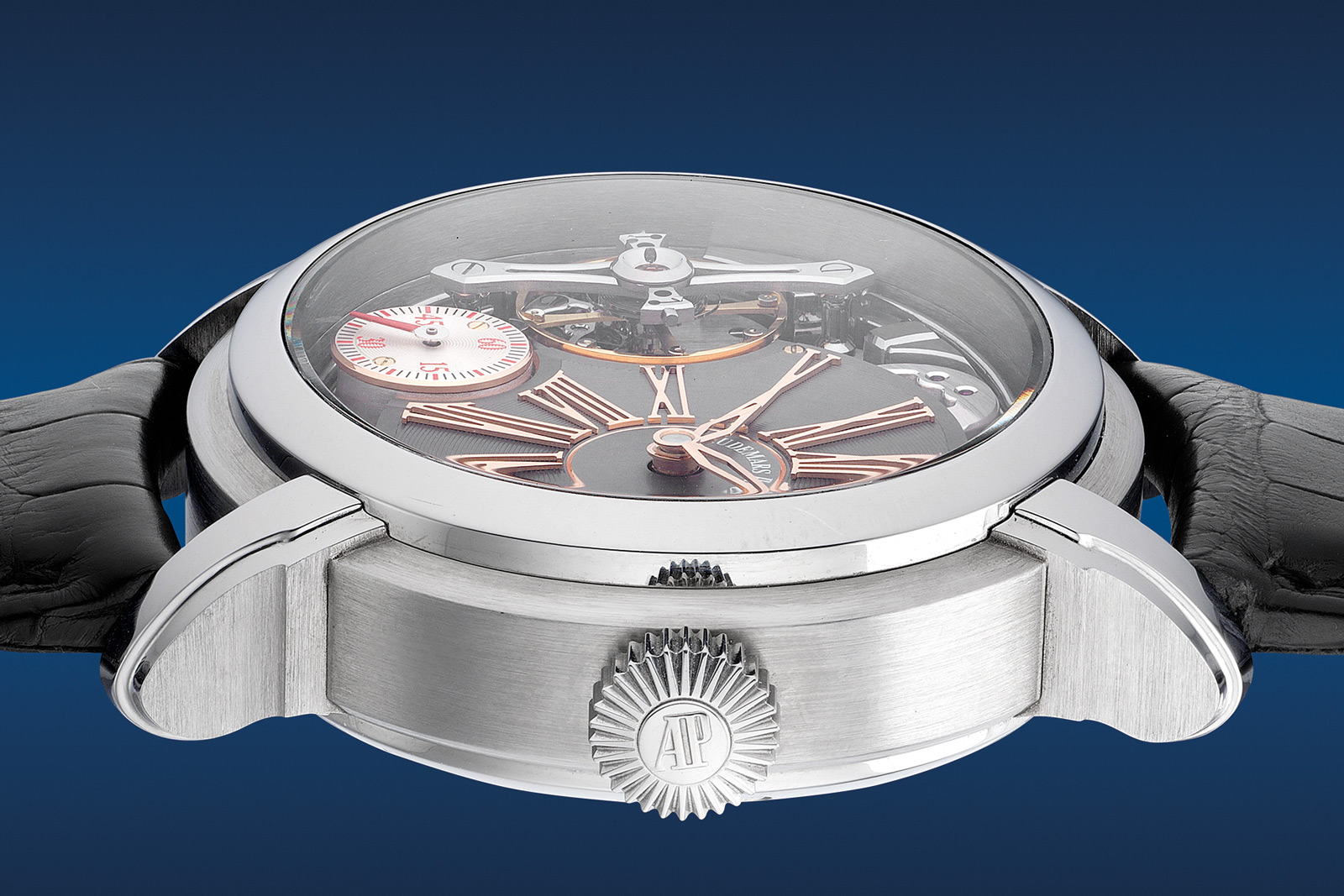 The Millenary repeater is one such interesting proposition – amongst the most interesting in fact – because it is so unusual that it is almost a prototype of sorts. Only eight were made and they were amongst the few models equipped with the AP Escapement, a reinterpretation of the 18th century Robin escapement that was direct impulse and lubrication free. But unlike the original the AP version is shock resistant.

Though the AP Escapement was mooted as the next big thing for the brand, it never made its way into mass production, making it rare and intriguing.

And the movement also has mirrored, double hairsprings attached to its balance wheel, which result in concentric “breathing” and compensations for potential poising errors in the balance. While it is a minute repeater with a seven-day power reserve, those are arguably the least interesting of its technical features. 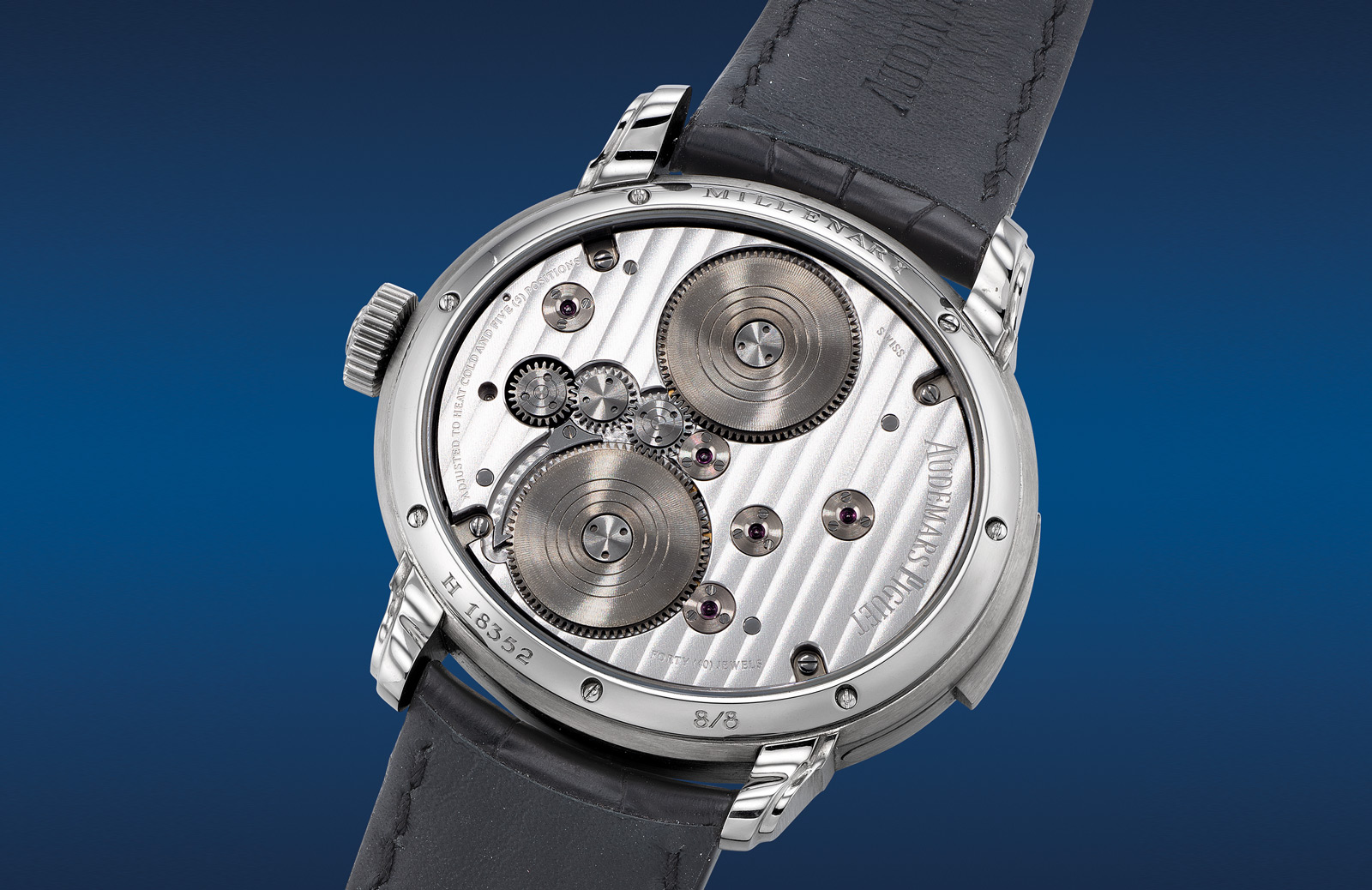 In terms of design it has the aesthetic that was the norm for Millenary models of the era: elongated Roman numerals and a semi-Art Deco style to go with the hyper-modern elements such as the exposed balance wheel, hammers, and gongs. 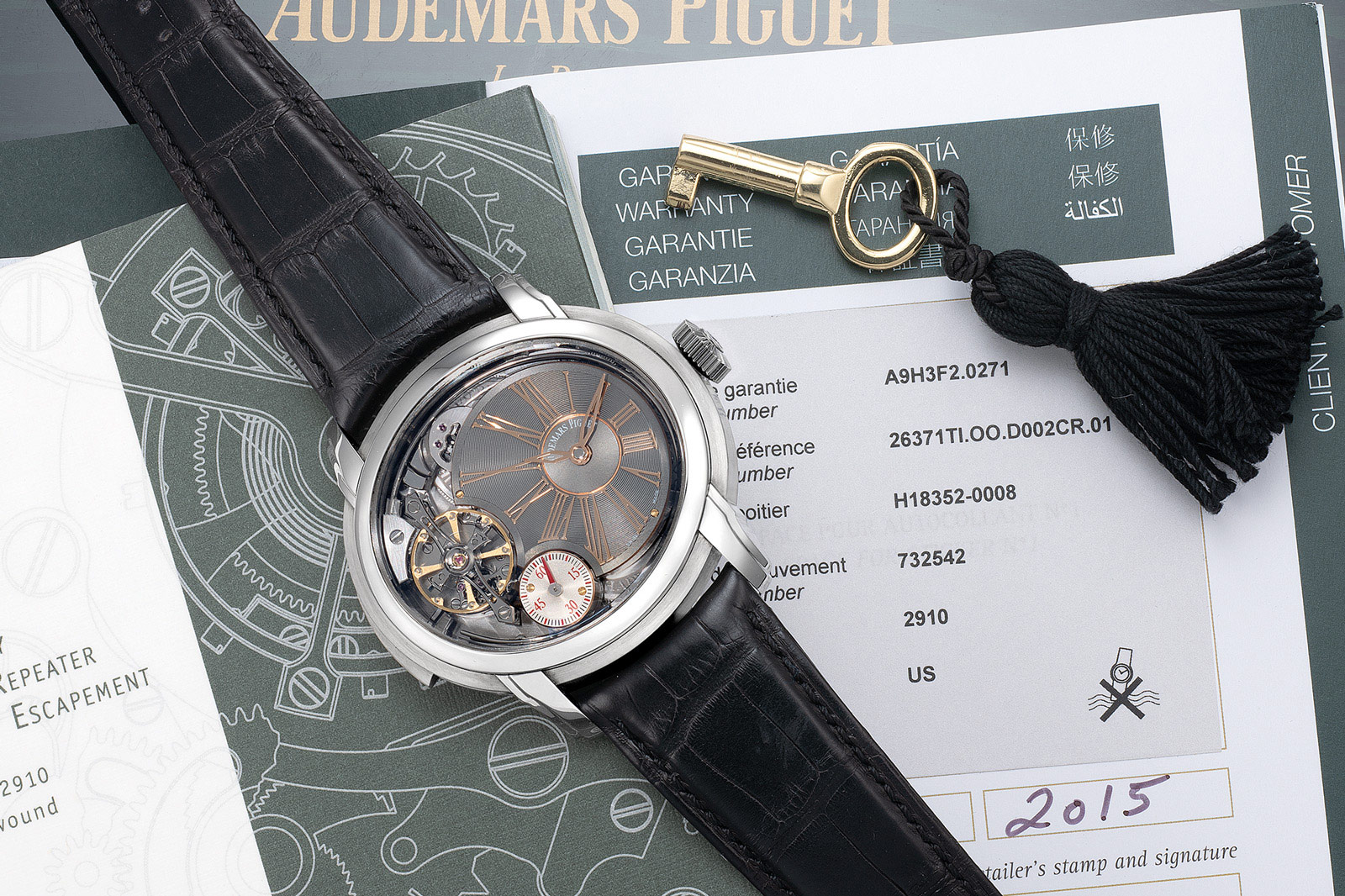 Although the salmon-dial version was just launched at Watches & Wonders, the Traditionelle Perpetual Calendar Chronograph has been in Vacheron Constantin’s catalogue for over a decade.

The first generation of the model was the ref. 47292/1 launched in 2010, as this example is. As with all perpetual calendar-chronographs by VC, it was powered by the venerable Lemania-based movement in its earlier format that has the slow-beat, 18,000 vibrations per hour balance that was later replaced by a higher frequency balance in the subsequent generation of the model. A standout among the two models launched in 2010, with the other having a restrained silver dial 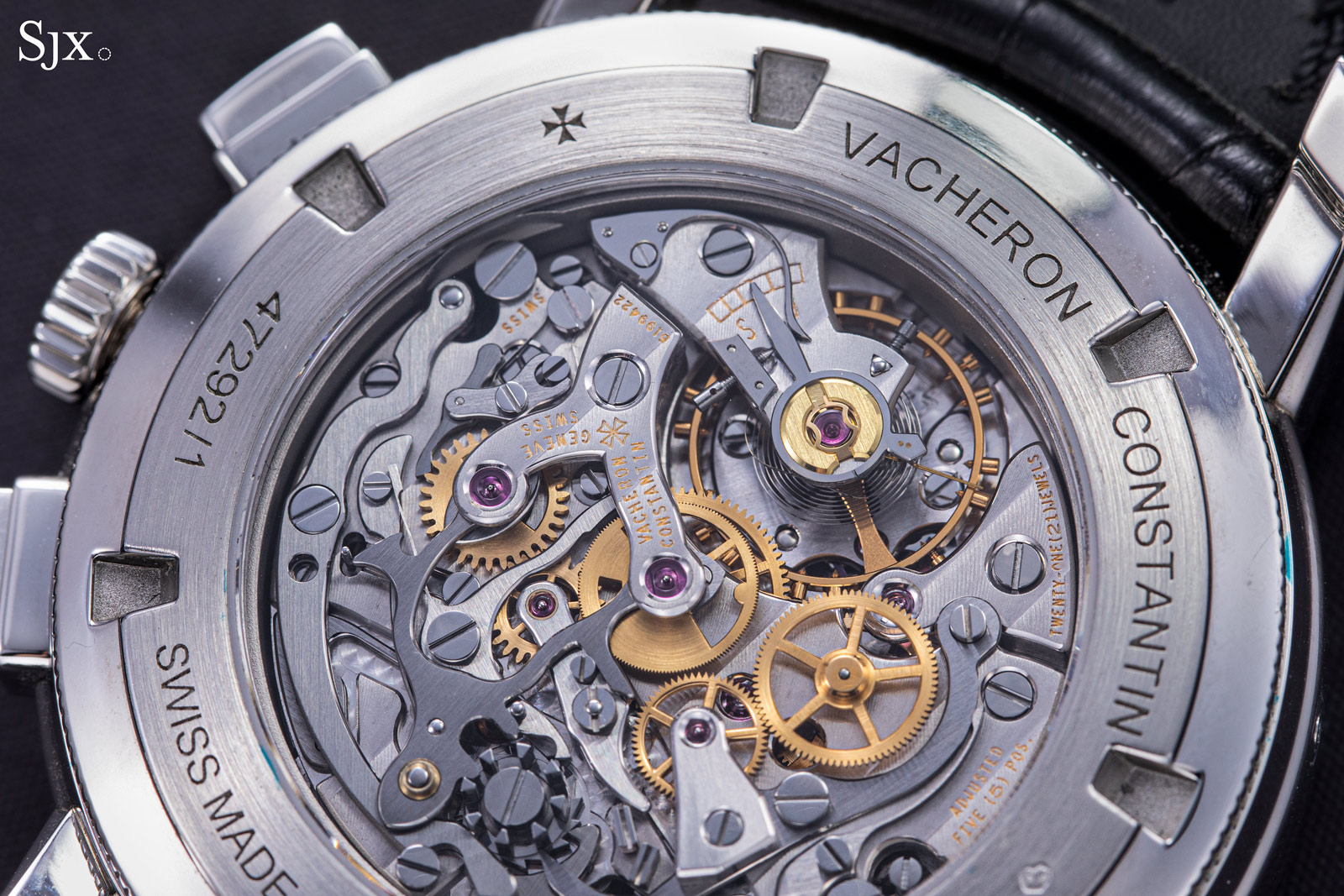 Thought this watch is over a decade old, it looks and feels nearly identical to the current Traditionelle Perpetual Calendar Chronograph. The case is the same large 43 mm, here with its presence boosted by the fact that it’s platinum.

The heavyweight case is accompanied by a grey dial with black accent that has been given much details to avoid appearing empty. The registers, for instance, are gently sunken and feature different surface finishes and colours. But the highlight is the moonphase disc that’s hand-engraved in relief and incudes a moon “face” that is alternately frowning or smiling, a quirky detail that is not found in any other perpetual calendar-chrongraph. The watch is large and monochromatic, giving it a slightly sporty appearance that’s also masculine, setting it apart from the classical look that is typical for this complication 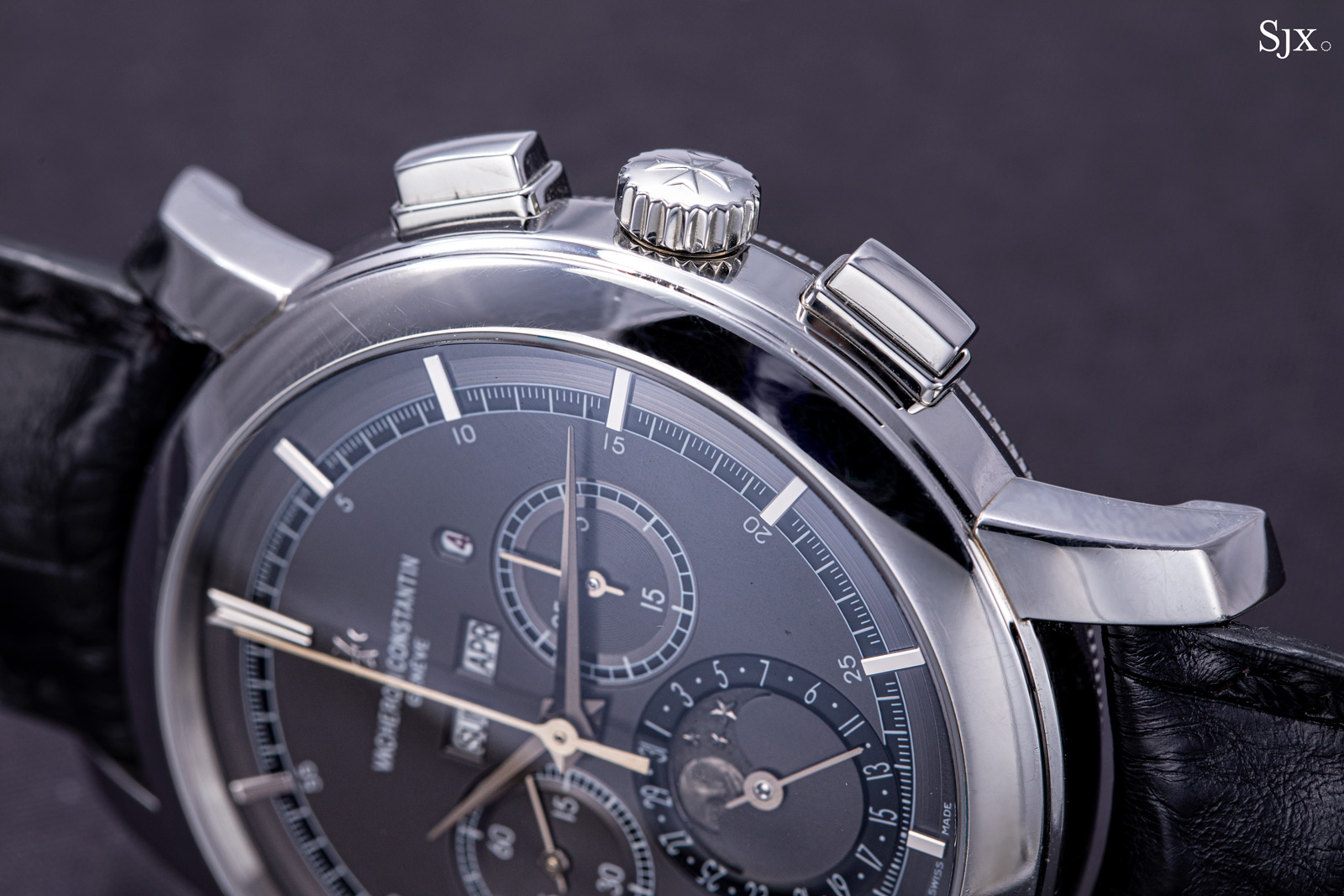 The case appears simple at a glance, but it has details as well, notably the fluted rim on the back

Like the Millenary repeater above, the Millenary MC12 is a complicated watch with a twist – and an ovoid case. It’s a chronograph with a tourbillon, and a very long power reserve, which was launched in 2006 to mark the debut of the Maserati MC12 supercar (which was built on the chassis of the Ferrari Enzo).

That explains the Maserati trident logo at two o’clock, which interestingly is even larger than the watchmaker’s logo on the elapsed minute register at 12 o’clock. And the red and blue livery of the watch reflects that of the car, as do its materials like the blue-anodised aluminium tourbillon bridge and carbon composite main plate. 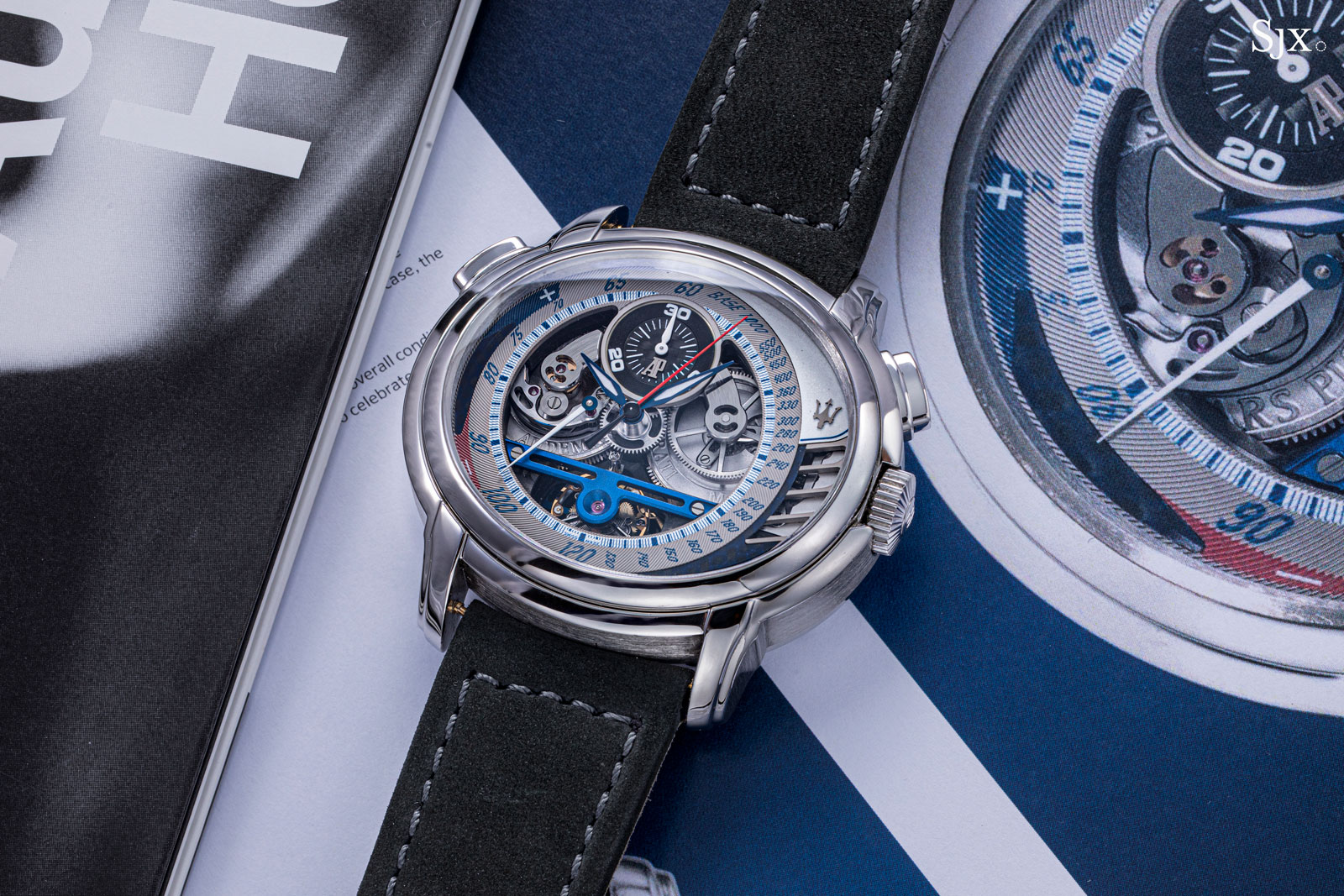 And the chronograph pushers are located on top half of the case, making it a “bullhead” chronograph – an entirely fitting layout for a watch with automotive theme since “bullheads” were associated with auto-racing watches since the 1970s.

The only element incongruent with the racing inspiration is the hefty platinum case, but it adds to the appeal of the watch because it feels massive and solid in the hand. AP did unveil an MC12 wristwatch in a carbon composite case several years after this one, though that version doesn’t have quite the same tactile feel. 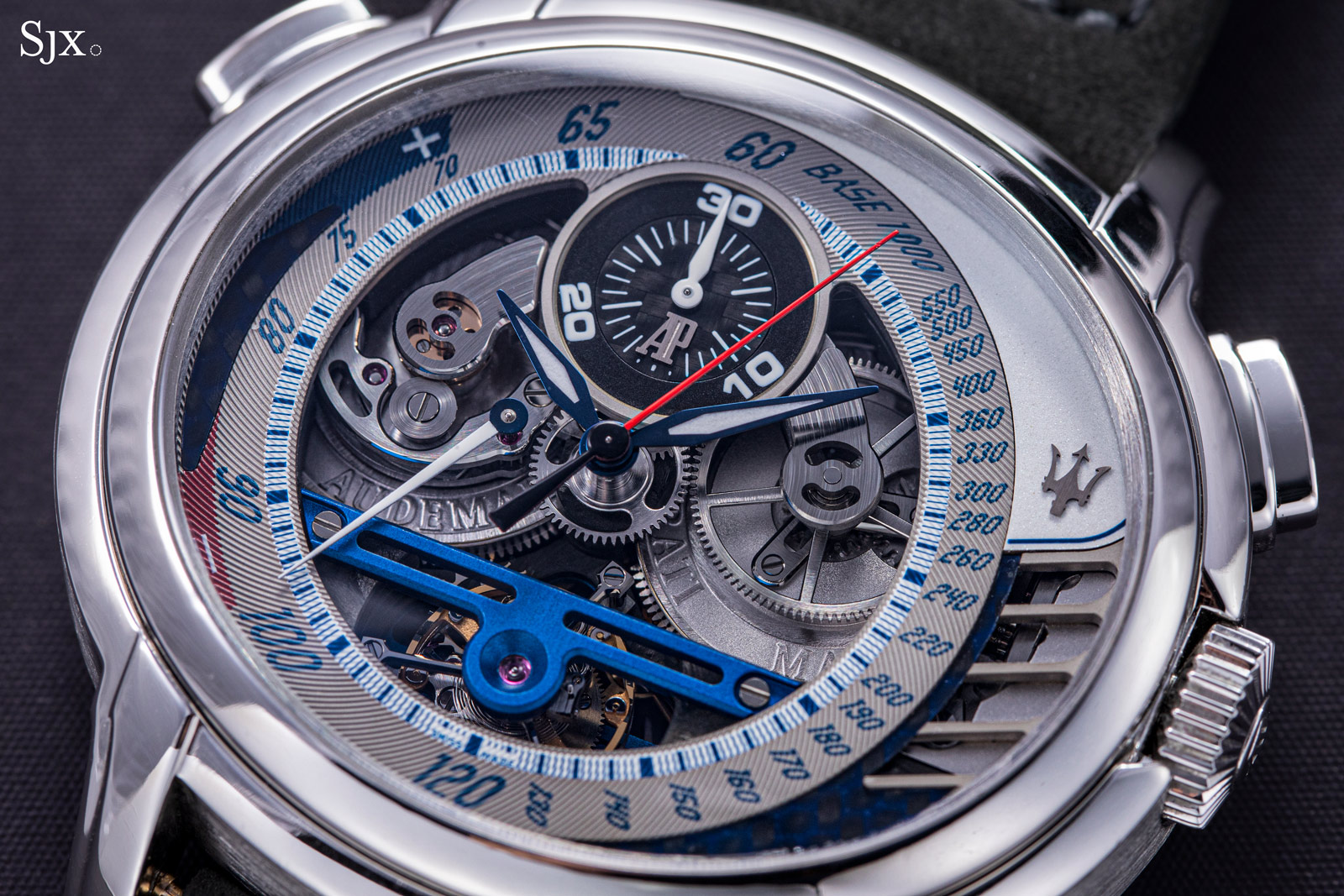 The movement within was developed by Renaud & Papi. The back reveals the traditional construction of the chronograph with its column wheel and lateral coupling, which contrasts against the contemporary aesthetic. Still, the chronograph has been dressed up to match the front, including with a pair of blue anodised aluminium bridges. Impressively for a watch with twin complications, the MC12 has a power reserve of 10 days, thanks to the twin barrels that are visible from the front through the open-worked dial.

And typical of the tastes early 2000s, the MC12 is gigantic at 47 mm wide. But because it is wide instead of long, the watch wears surprisingly well, making it a good choice for someone who wants massive wrist presence but still appreciates wearability.

Last but not least is a watch that isn’t complicated per se, but was certainly complicated to put together when it was manufactured, the Grand Seiko V.F.A. “61GS” ref. 6186-8000. And it also merits a mention because of its significance in the history of 20th century precision timekeeping; it represents Seiko’s successful efforts in the 1960s to challenge the then-dominant Swiss watchmakers for the precision timekeeping crown. Though Seiko made a good number of highly precise watches, the best (leaving aside the observatory-tested watches) are those that went to the extreme in pursuit of precision timekeeping, namely V.F.A., short for “Very Fine Adjusted”. Such watches were guaranteed to have a maximum monthly deviation of one minute. Grand Seiko V.F.A. watches was introduced in 1970 and only produced until 1975, a short run that resulted in fairly small numbers made.

In 1972, Seiko introduced its first and only V.F.A watch with a day and date, while prior models were either time-only or time-and-date. The present example is a model 6186-010 (ref. 6186-8000), which was one of the two models launched that year, with the other having a dial in dark blue with differently shaped indices. The version with a silver dial with slim and tall indices

Distinctive but still recognisable as a Grand Seiko, the dial of the present example is well preserved. For vintage Grand Seiko enthusiasts will note the logo right under the V.F.A. label, which indicates this was produced by Suwa Seikosha, one of the two independent factories that made Grand Seiko watches at the time.