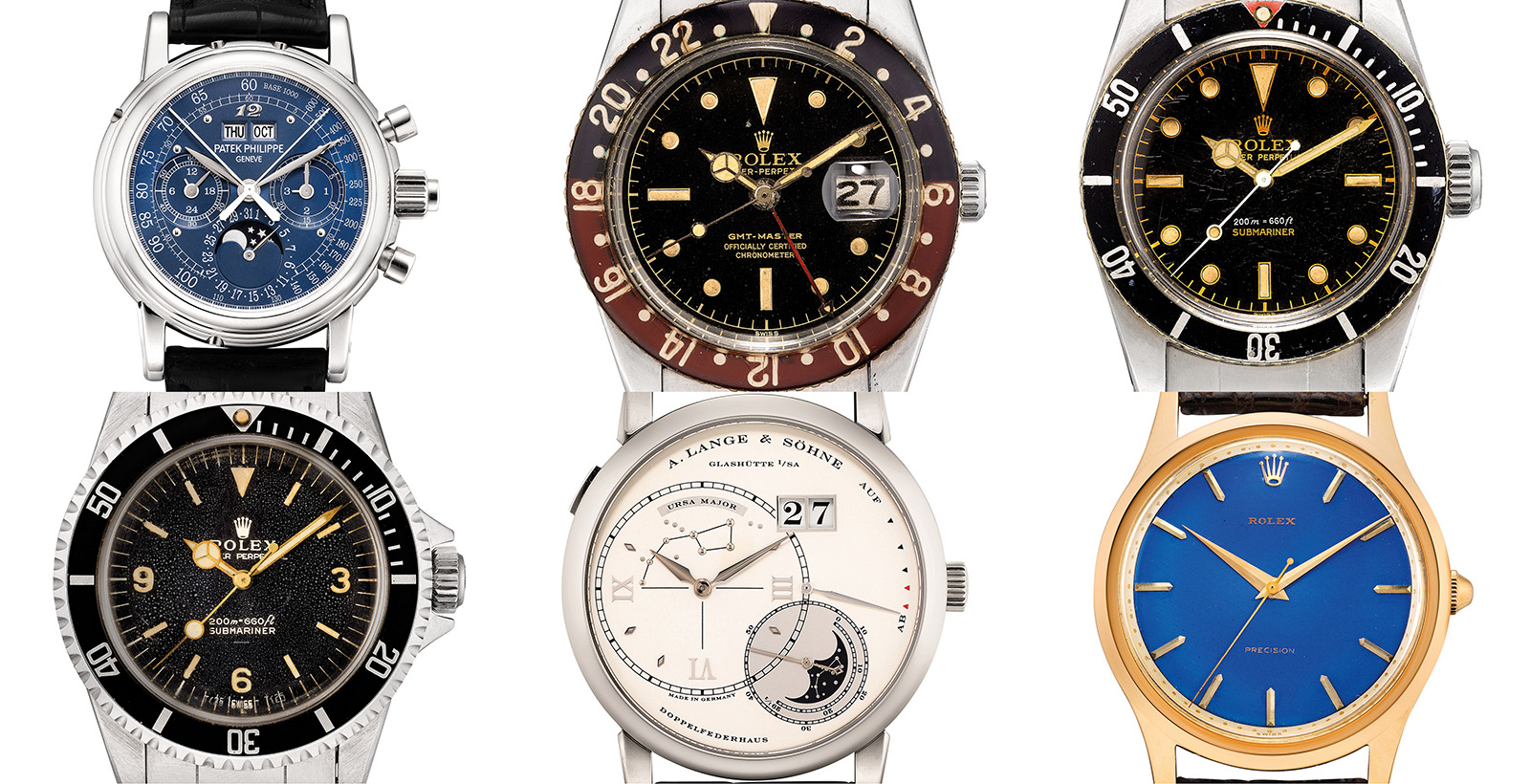 Scheduled for the end of May, The Hong Kong Watch Auction: Two will see 386 diverse lots go under the hammer. As is typical for auctions in Hong Kong, the line-up is heavy on high-end modern watches, including a one-off ref. 5004 that was originally owned by Eric Clapton.

But the team at Phillips has artfully put together a strong offering of vintage timepieces that will please the most dedicated vintage watch aficionado. The vintage selection includes admirably well preserved vintage Rolex sports watches, and the one of the stars of the sale: a spectacular third series Patek Philippe ref. 2499 in pink gold.

While the original Grand Lange 1 with its overlapping sub-dials was widely panned by collectors and never enjoyed the popularity of its smaller counterpart, the Luna Mundi has become surprisingly desirable, with examples having sold in past auctions for between US$99,000 and US$140,000; the original retail price was about US$65,000 for the pair. This pair is complete with the original packaging, and carries an estimate of HK$480,000 to HK$640,000 (US$60,000 to US$80,000). Lot 122 – Vianney Halter Trio – The third of Vianney Halter’s steampunk-inspired timepieces, after the Classic and Antiqua, the Trio is the least known but no less interesting. Though this is the only rectangular watch of the series, it has all the hallmarks of Halter’s Futur Antérieur watches, including the hand-applied rivets, a hand-made dial with black lacquer-filled numerals, and gorgeous blued steel hands.

Halter’s attention to detail in constructing his watch cases is well known – even the knobs on the crown are tiny gold rods inserted by hand. Time is indicated on the largest sub-dial, while the bottom portholes show the seconds and each digit of the date. Lot 131 – Jaeger-LeCoultre Reverso Grande Complication à Triptyque – One of the most complicated watches ever made by Jaeger-LeCoultre, the Triptyque is named after its three faces. The front dial includes the time, a 24-hour indicator, and a flying tourbillon featuring the patented, extra-efficient Ellipse Isometer escapement. The other side shows the equation of time, zodiac calendar, star chart, sidereal time, as well as sunrise and sunset times, all of which have been calibrated for Moscow.

Most intriguing is the third face of the watch that sits on the back plate of the Reverso carriage. This is an instantaneous perpetual calendar, but it has no permanent mechanical connection to the movement in the swivelling case. Instead, a tiny pusher activates the perpetual at the stroke of midnight everyday, advancing the calendar in a flash and then retracting back into the main case. The estimate is HK$1.4m to 2.4m (US$180,000 to US$300,000). Lot 209 – Rolex ref. 8382 with a blue enamel dial – Circa 1951, pink gold and a largish 37 mm in diameter, this charming watch is an unusual diversion from the typical Rolex watches seen at auction. The dial is a bright blue vitreous enamel dial made by Stern Freres, the respected dial maker founded by the Stern family that owns Patek Philippe; a star hallmark on the back of the dial attests its origins. The minute dots on the outermost track are hand-engraved, while the lettering on the dial is gilt print. This is estimated at HK$400,000 to HK$600,000 (US$50,000 to US$75,000). Lot 270 – Rolex Submariner ref. 6538 – A simple but exceptionally valuable timepiece, the “big crown” Submariner ref. 6538 is the model Sean Connery wore while playing James Bond in Dr No. This particular example is in outstanding condition, featuring an earlier “metres-first” gilt dial in admirable condition that retains its distinct lettering, glossy surface and consistently aged radium, plus a case that still has the signature bevelling on the lugs. The estimate is HK$620,000 to HK$900,000 (US$78,000 to US$110,000). Lot 285 – Rolex Milgauss ref. 6541 – The first Milgauss introduced by Rolex in 1954, the ref. 6541 has several unusual features that make it desirable, including a lightning bolt seconds hand, honeycomb texture dial and a slightly larger, 38 mm case to accommodate the soft iron cage inside to protect the movement from magnetism. This particular example also has a “tropical” dial that’s aged to a pleasing, variegated brown, as well as being in crisp condition. The estimate is HK$1m to HK$2m (US$125,000 to US$250,000). Lot 292 – Rolex Submariner ref. 5513 “Underline Explorer” dial – Vintage Rolex collecting is littered with nicknames for the most obscure features, including the “Underline Explorer”. This double-barrelled nickname refers to the brief line under “Submariner” at six o’clock, as well as the Arabic numerals at the quarters, just as on the Explorer wristwatch. And this Submariner also has a pointed crown guard (PCG) case, named after the angular shape of the crown guards. While the Submariner ref. 5513 is a relatively common model, this early example is especially valuable thanks to its uncommon features, hence the estimate of HK$900,000 to HK$2m (US$110,000 to US$250,000). Lot 368 – Patek Philippe ref. 2499 in pink gold – The ref. 2499 is one of the most sought after Patek Philippe watches, being rare (only 349 were made over three decades), possessing of the brand’s signature chronograph-perpetual complication, as well as being comfortably large in size, with a 37.7mm case diameter. All that makes for a very pricey wristwatch, and then there are rare variants of the 2499.

One of the star lots in the sale, this third series 2499 is just one of six known in pink gold; the third series in pink gold is the rarest amongst all of the 2499 generations. In addition, this particular watch has an unusual dial that might be unique, with a flat sub-dial at six o’clock that lacks the typical recessed circle that outlines the sub-dial. The estimate is HK$9m to HK$18m (US$1.12m to US$2.25m).

Both will take place at the Mandarin Oriental Hong Kong, located at: