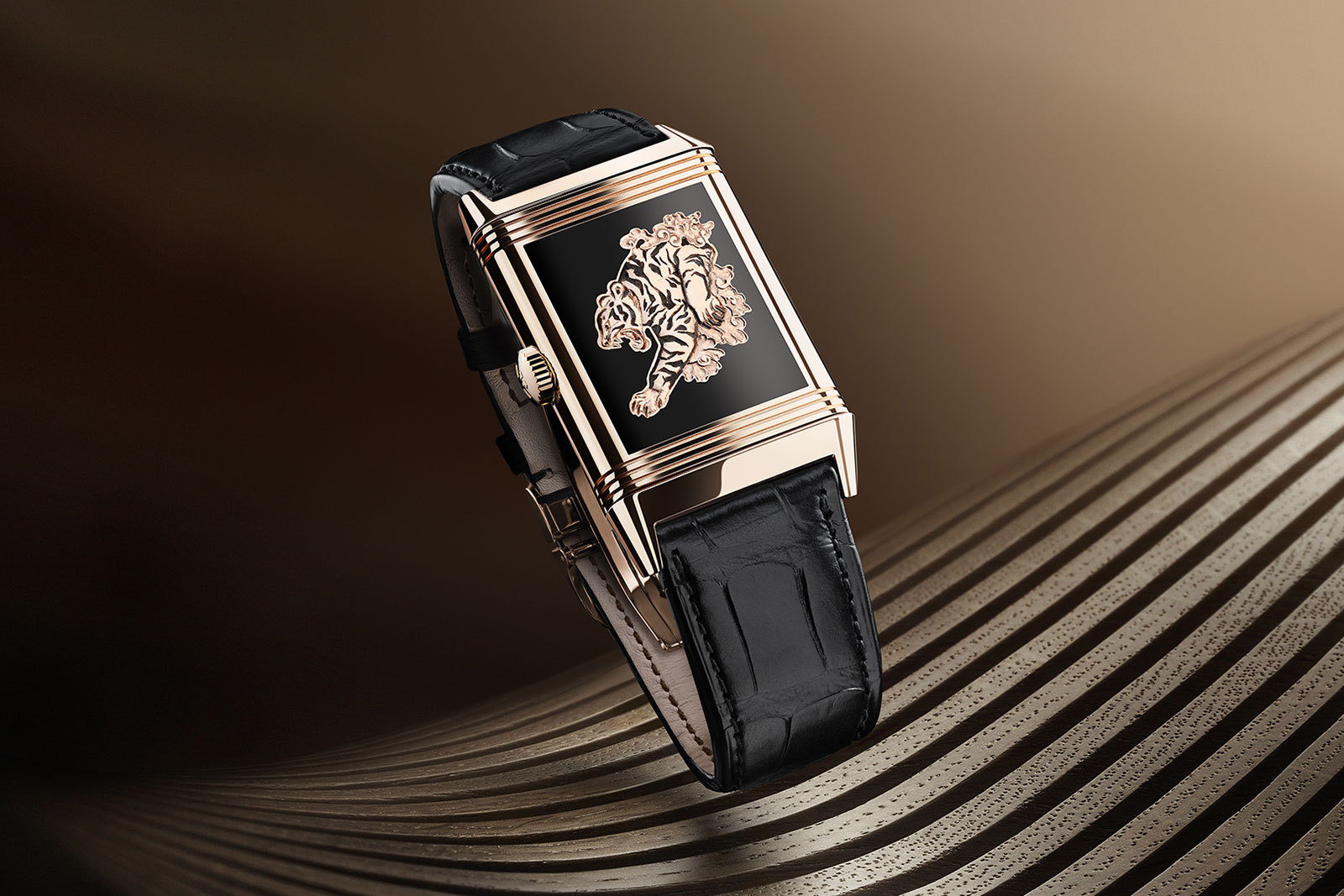 The Reverso Tribute Enamel “Tiger” is a sharp but simple on the front, while its reverse depicts a tiger leaping out of the clouds. Unusually, the decoration combines both enamel and engraving, making it more elaborate than the typical enamelled Reverso. 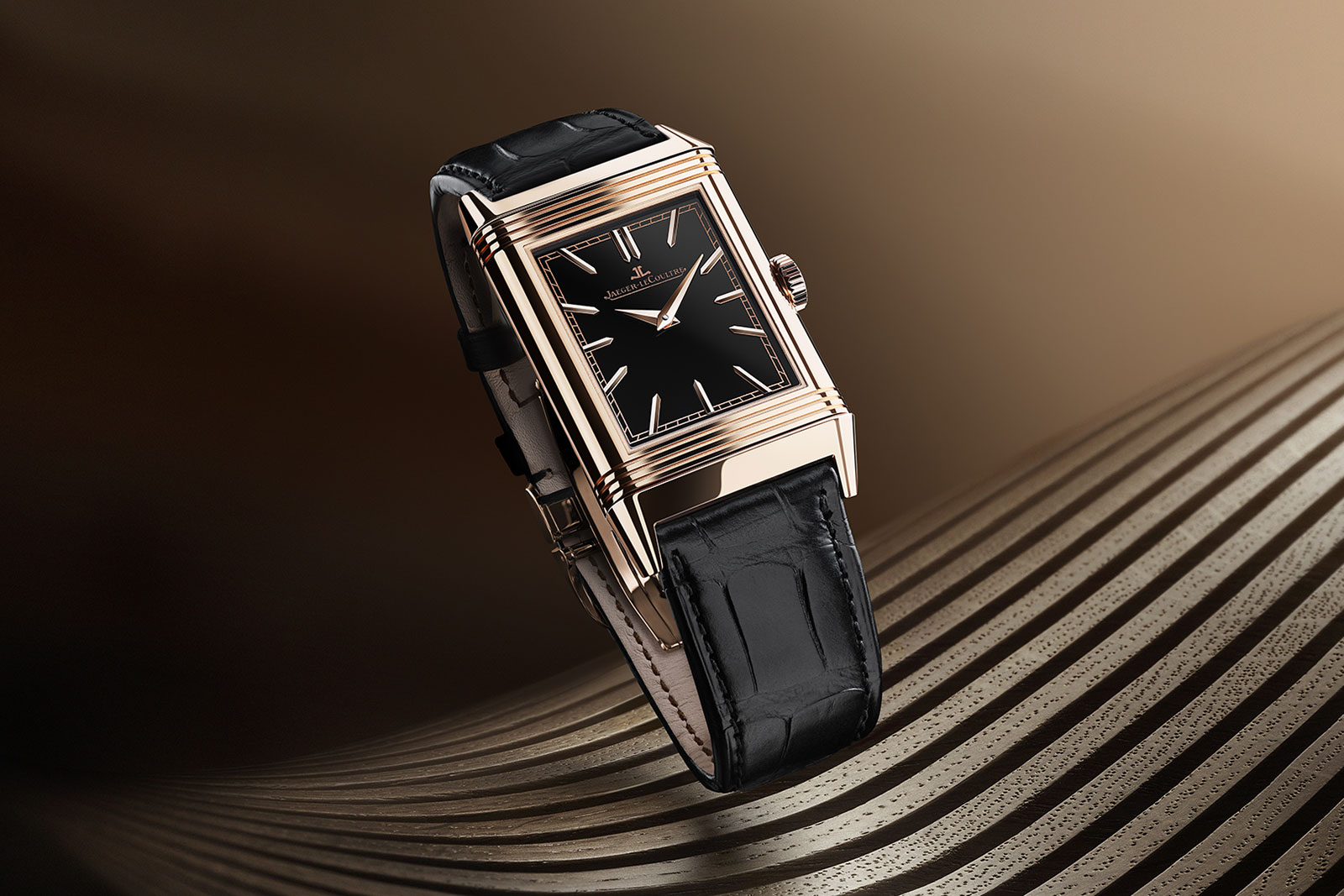 The quintessential enamelled Reverso is a miniature painting in polychrome enamel – a specialty of Jaeger-LeCoultre since the 1990s. The Reverso “Tiger” in contrast, is a stately black and gold.

Even though the “Tiger” dials back on the colours, it is a striking and beautiful watch. The simplicity at a distance gives away to detail when you examine the roaring tiger on the back, which is executed in low relief. It leaps out of a black background that is actually fired enamel. 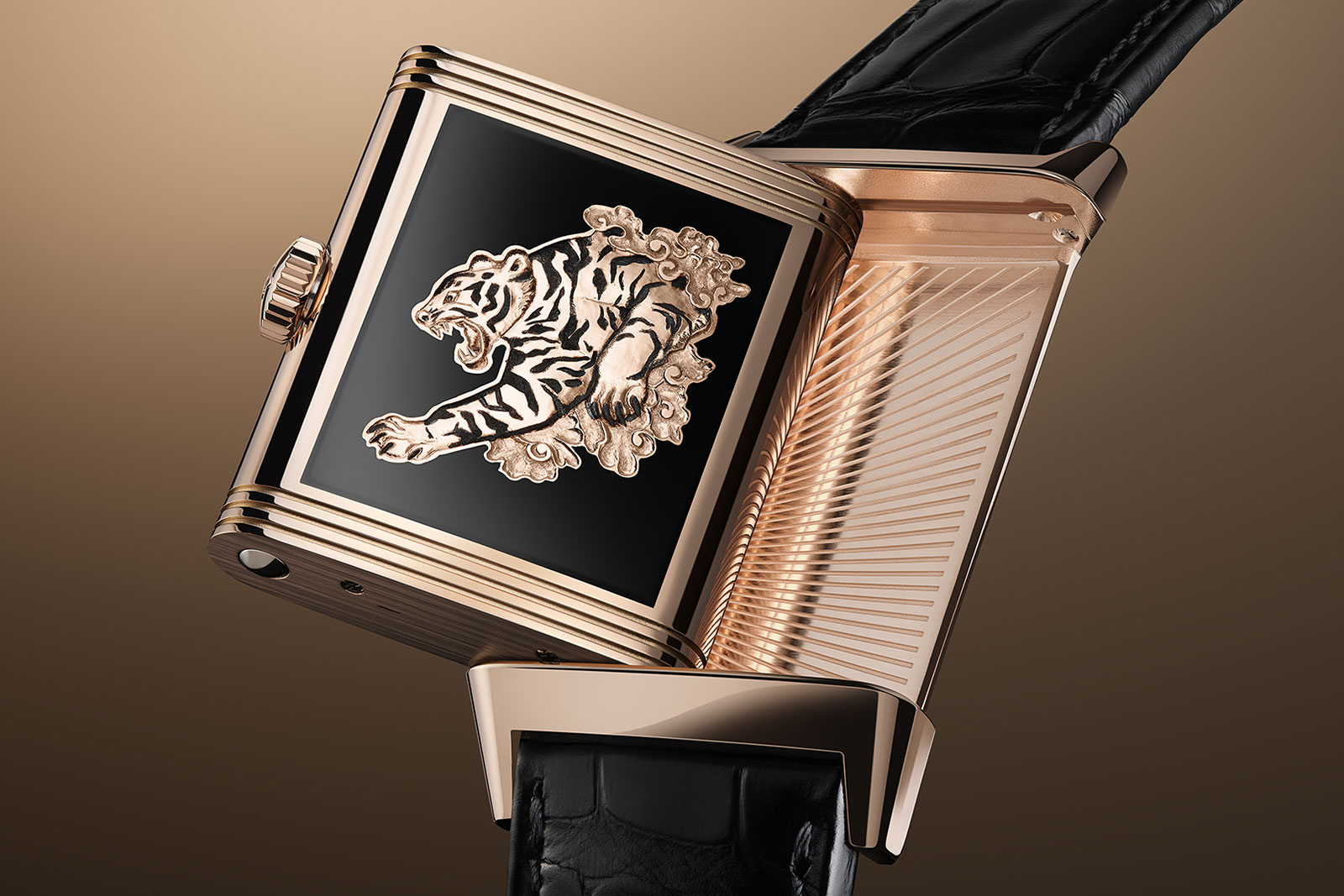 At the same time, this combination of figurative engraving in addition to enamel is a first for Jaeger-LeCoultre, at least in recent years, making the “Tiger” a rather special watch.

Naturally the elaborate decoration comes at a price – €90,000 before taxes to be exact. That’s about US$100,000 and about the same as past Reverso models with miniature enamel paintings.

The engraved tiger takes form after the back has been enamelled. So the process starts with the blank back being painted by hand with black enamel – the enameller is careful to leave the silhouette of the tiger untouched – and then fired in an oven, melting the enamel powder and fusing it to the back.

The enamel is then polished to give it a perfect glassy finish, before the back is turned over to the engraver. He or she has to work within the tiny confines of the area within the enamelled surround, carefully removing material to create the dynamic portrait of the tiger. Once complete, the tiger is accented with black lacquer for its stripes. This process takes 55 hours. 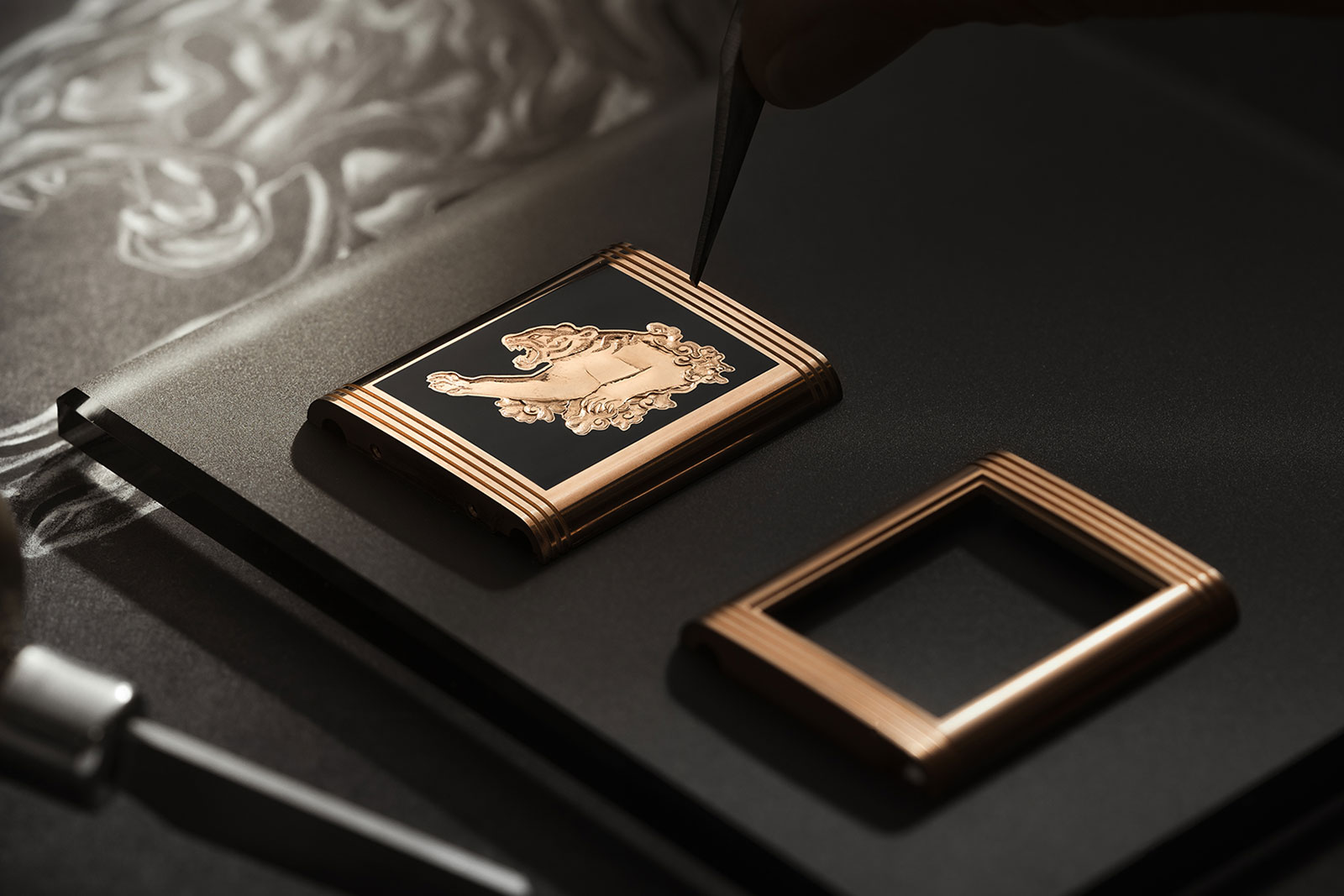 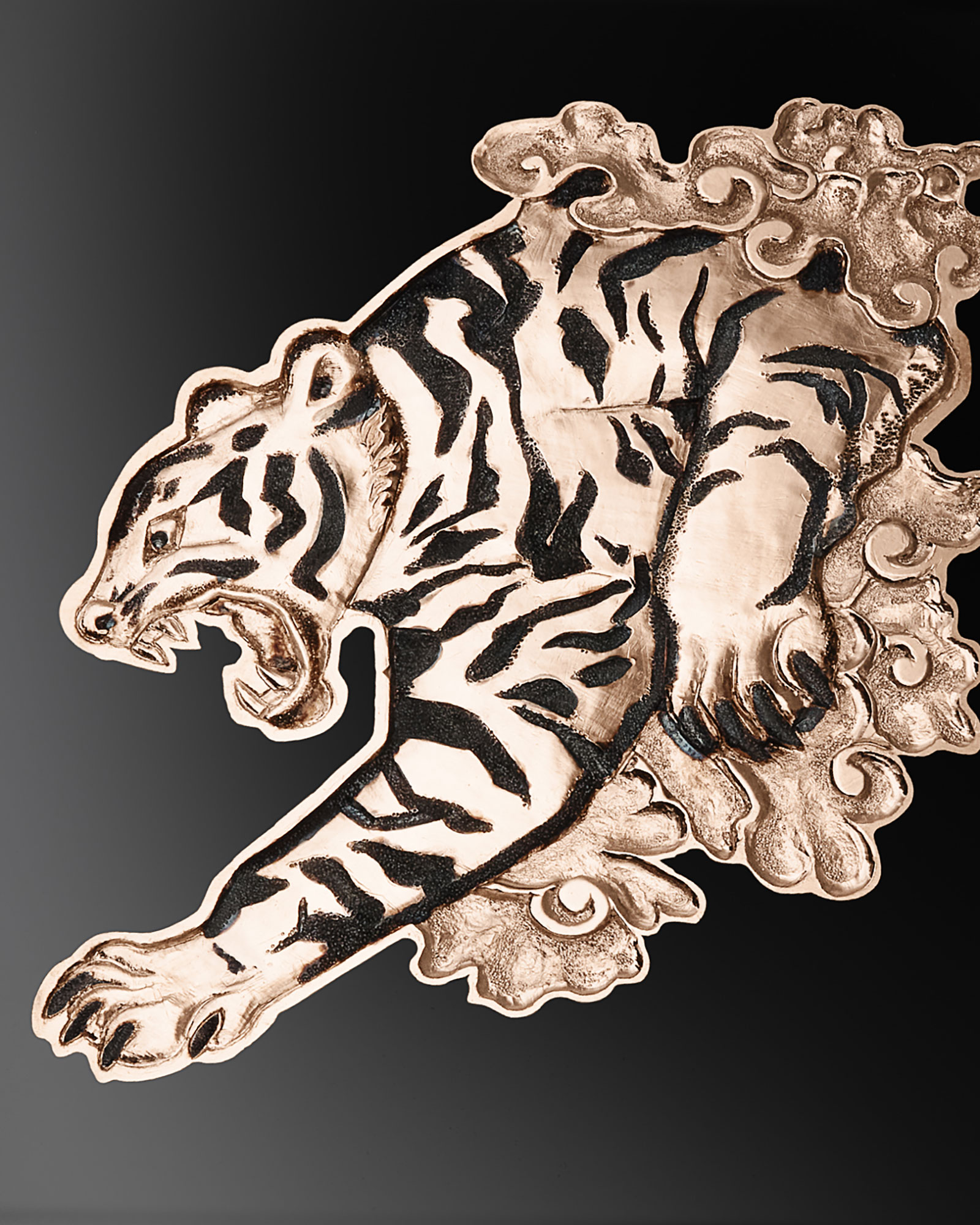 Notably, the dial is also black fired enamel. It’s matched with pink-gold tone hands and indicates, along with a railway minute track in metallic print. And like most manual-wind Reversos for men, this is powered by the cal. 822, the venerable workhorse calibre that was designed specifically for the Reverso, explaining its ovoid form. Limited edition: No but only made to order
Availability: Only at boutiques
Price: €90,000 (excluding VAT) The skeleton “Jumbo” is naturally offered with a brand-new movement, the cal. 7124. Extra revealing and extra thin – even thinner than the cal. 7121 found in the standard “Jumbo” – the cal. 7124 boasts a striking, cohesive aesthetic thanks to having been designed from the ground up as an open-worked calibre. 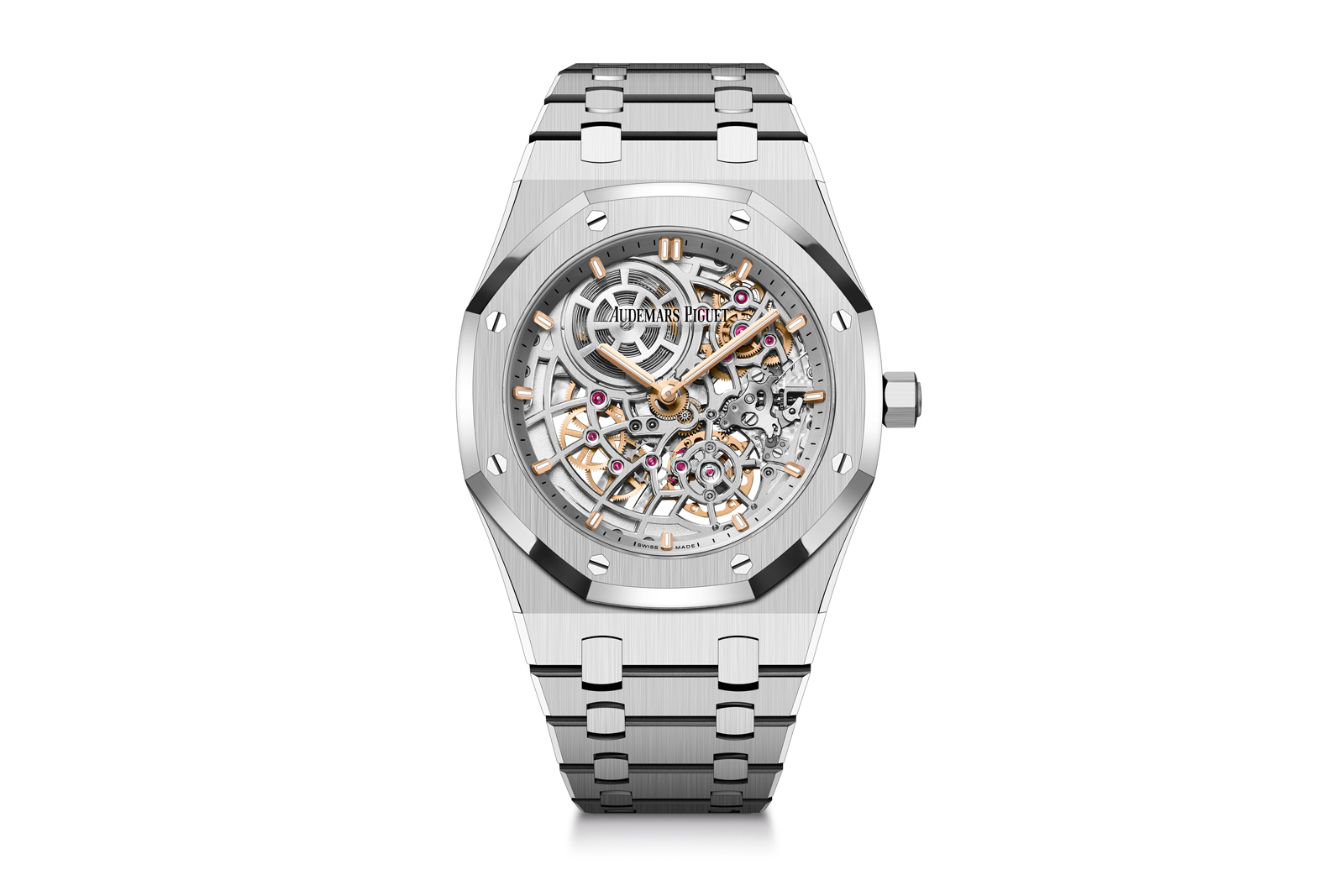 The steel variant with a low-key, almost monochromatic palette

Striking, original, and impressive, the “Jumbo” Openworked is clearly a cut above standard “Jumbo” ref. 16202. It is arguably a more comprehensive upgrade over the equivalent, earlier-generation model than the ref. 16202, given the nature of the new calibre.

Everything attractive about a skeleton Royal Oak can be found in the “Jumbo” Openworked, namely the meticulous hand finish of an ultra-thin movement inside the elegantly flat and wide case.

The visual details of the earlier-generation skeleton movement that were unappealing – namely the meandering bridges that seemed almost messy – have been eliminated. Instead, the cal. 7124 brings with it an architecture that’s contemporary and geometric with strong, flowing lines, while remaining intricate enough to capture the feel of an old-school skeletonised movement. Starting at US$90,400 in steel and rising to the equivalent of US$127,000 in pink gold, the ref. 16204 costs slightly less than the Royal Oak Double Balance wheel Openworked. From that perspective, the ref. 16204 is fairly priced since the lacks the double balance. While the double balance wheel might have some extra techie appeal, the simplicity and slimness of the skeleton “Jumbo” is certainly hard to top.

But unlike older generation movement that were retroactively open worked, the cal. 7124 was conceived with skeletonisation in mind from the very beginning, explaining the thoughtful design.

Because it is modern in both concept and manufacture, the cal. 7124 is skeletonised with modern techniques. No more files and raws, instead unnecessary material from the bridges of the cal. 7124 are removed via computer numeral control (CNC) machining as well as electric discharge machining (EDM), which is a process of removing metal via sparks. The top right of the base plate has a surprisingly curvaceous outline, with its appeal enhanced by the outward and inward angles

However, the cal. 7124 is finished by hand (presumably with hand-held electric tools), resulting in numerous inward and outward angles along the bevelling of the bridges – an impressive 324 angles according to the brand.

Notably, most of the anglage has a domed profile, a flourish not achievable solely via computerised or automated finishing techniques, therefore indicating a high degree of manual work in the decoration. 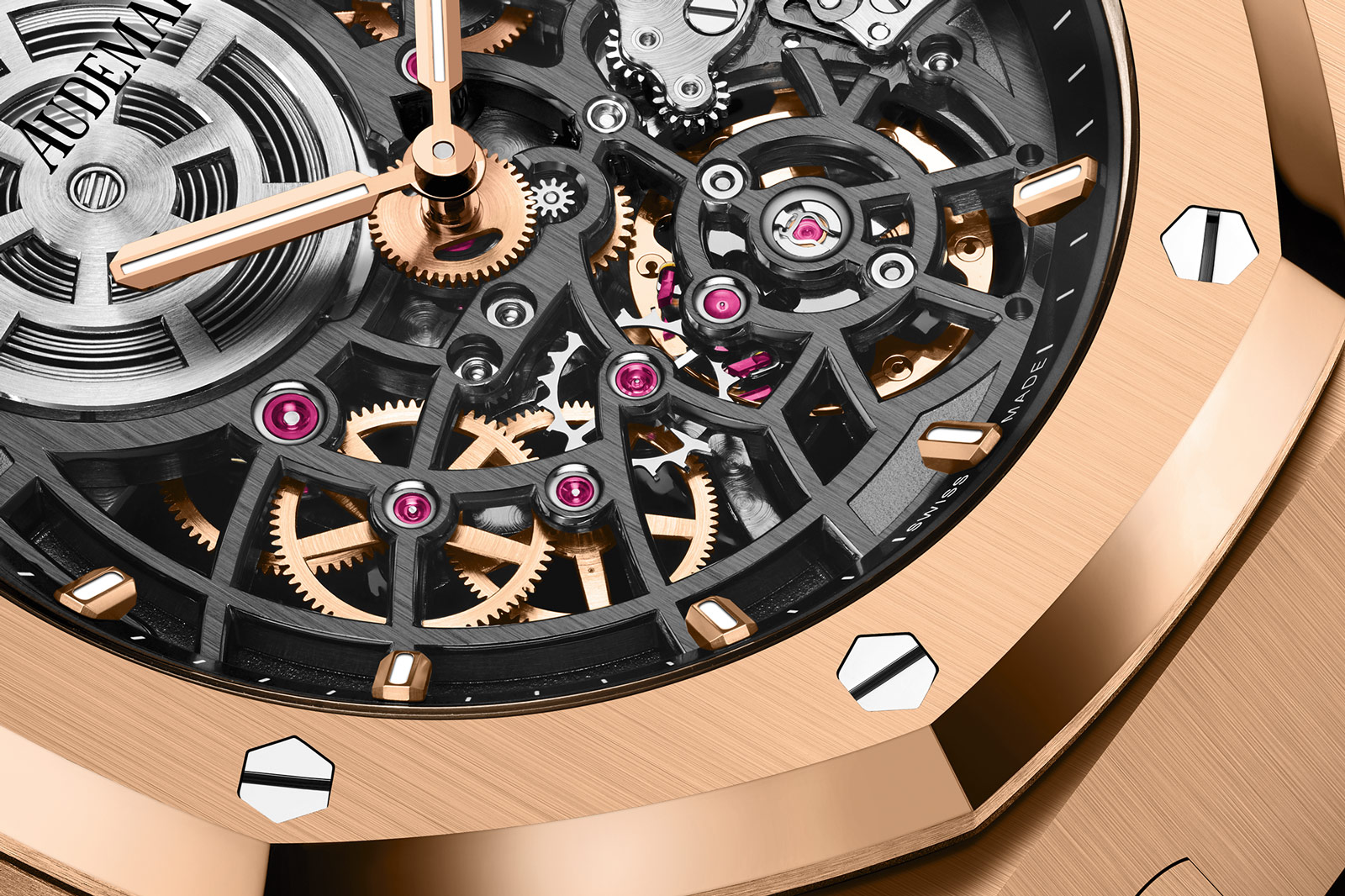 The black-on-gold palette of the pink gold version is striking, though the bevelling is less obvious due to the colour

The view from the back is familiar too, with the twin golden bridges calling to mind the cal. 7121 found in the standard “Jumbo” ref. 16202.

But here the movement has been thoroughly skeletonised, leaving the symmetrical architecture – the gold bridges hold the balance and barrel – even more obvious. The 50th anniversary rotor of the Royal Oak is only available this year, but the font for the emblem is far too modern compared to the rest of the watch Created to mark the 50th anniversary of its quintessential octagonal watch, the new “Jumbo” is arguably the first truly new version of the original Royal Oak, as it contains a latest-generation movement. the cal. 7121 replaces the cal. 2120/2121 that’s been in service since 1972. Naturally the ref. 16202 makes it debut in the quintessential combination of a blue-grey dial and steel case. And the line up also includes three precious metal versions that are arguably more striking (and certainly more expensive). With the retirement of the ref. 15202 announced last year, an all-new Royal Oak “Jumbo” became inevitable. And the fact that this year is the 50th anniversary of the model makes it even more so. 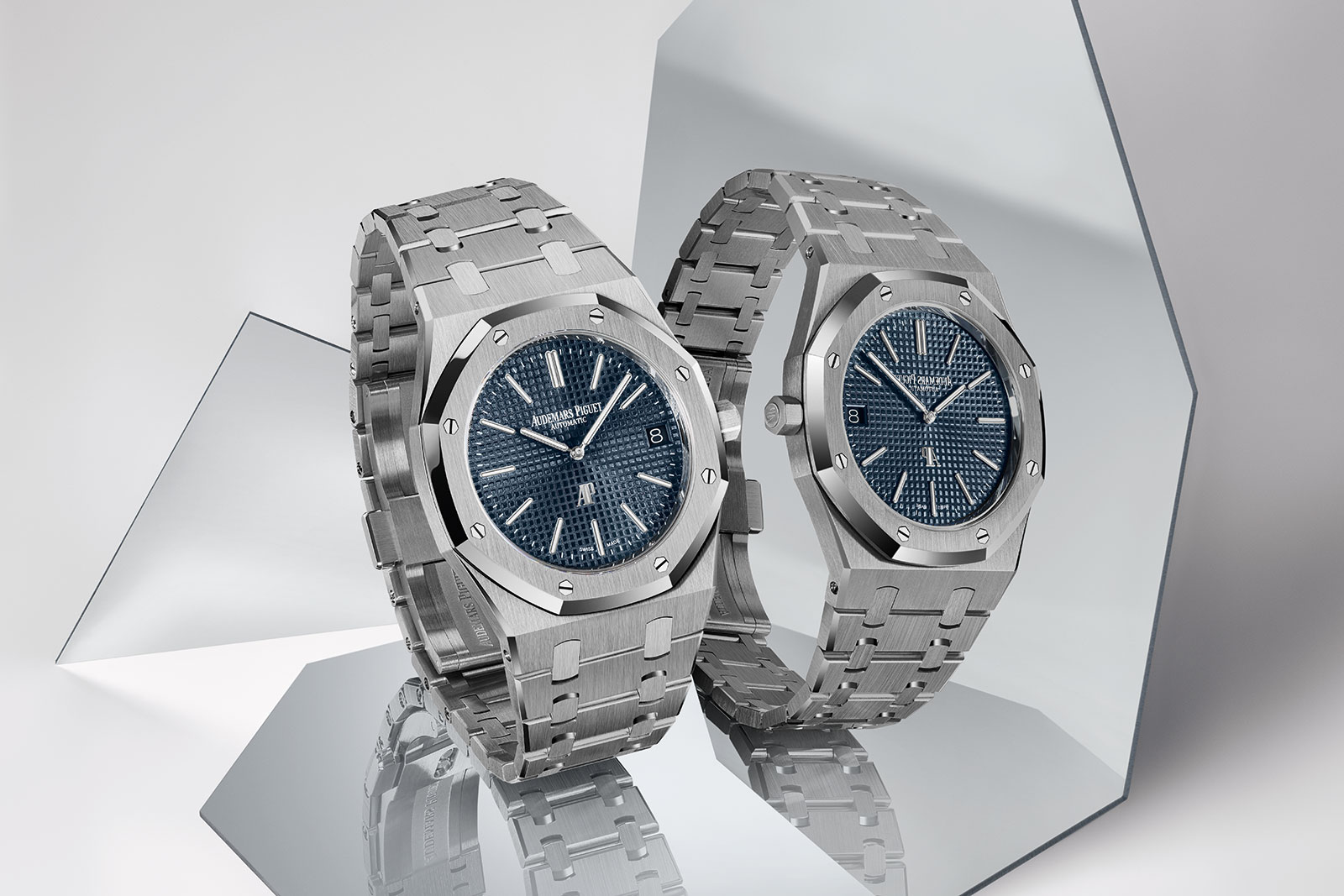 It happened and fortunately, the new “Jumbo” lives up to expectations. It’s still very much the same – the case dimensions remains unchanged – but revamped just enough to it a substantively new watch in technical terms.

And then there are the gorgeous smoked dial finishes, which set it apart from past models and make it the “Jumbo” of the 21st century. The highlight of the ref. 16202 is the cal. 7121. Still ultra thin like its predecessor, the cal. 7121 boasts a modern construction that promises superior timekeeping over a longer period as well as better robustness.

It also incorporates several interesting technical and visual details. Most importantly, the cal. 7121 includes a quickset date mechanism, eliminating a major inconvenience of the original. The 50th anniversary rotor that will only available only in 2022

The new Jumbos do cost a lot more, but the improved movement makes it worth it. That said, the retail prices of ultra-desirable sports watches like the “Jumbo” are a moot point, since demand so far outstrips supply. The most expensive version in platinum

Put simply, the ref. 16202 changes only where it should, so it’s still reassuringly familiar. Similarly, the dial retains the classic petite tapisserie guilloche that’s synonymous with the Royal Oak. But because of the new calibre, the date is now positioned closer to the edge of the dial.

Importantly, the dial of the steel model is executed in the Bleu Nuit, Nuage 50 (“night blue, cloud 50”) colour as the 1972 original, but the finish is obtained with a modern deposition technique instead of a galvanic bath. The date gets a quickset mechanism, while sitting closer to the edge of the dial

Each of the gold versions have smoked dials to go with the case metal, once again in the petite tapisserie pattern. The only exception is the platinum version, which has a radially-brushed dial with a smoked green finish – exactly the same dial as found on the platinum ref. 15202 launched last year (and now discontinued). The new movement does incorporate several compelling details, from both aesthetic and technical perspectives. Besides the quickset date, another convenience is the power reserve, which is now 55 hours, up from 40 in the original.

Some of the improvements are entirely evident from the back. The full balance bridge, for instance, brings with it better shock resistance, but it is complemented by a nearly identical identical barrel bridge for visual symmetry – an uncommon feat in an ultra-thin movement where height often trumps style. And the movement finish has also been made more contemporary, which means the calibre loses some of the old-school details found on the cal. 2121. The cal. 7121, for instance, has fewer rounded, polished bevels on its bridges.

While the modern architecture is attractive, the simplified finishing is less attractive but inevitable in a modern calibre conceived to be optimised for production on a largish scale.