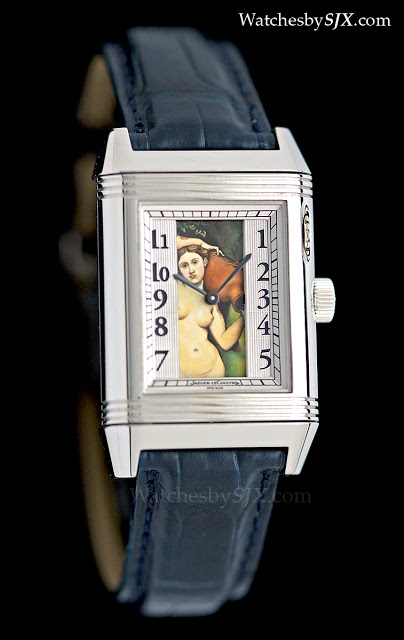 The Jaeger-LeCoultre Reverso offers a natural canvas for decoration with empty case back, which is why JLC offers a wide range of personalisation options, including hand-engraving. But once upon a time JLC offered a line of unusual Reverso watches with enamelled dials hidden by a rolling shutter, the Reverso à Eclipses.

This particular Reverso à Éclipses was part of a series of eight watches titled Famous Nudes, each featuring a reproduction of a well known painting from classical European art, including works by  Renoir, Klimt and Botticelli. Each painting was carefully reproducing using the technique of miniature enamel painting, a technique perfected at JLC by its master enameller Miklos Merczel. In the 2000s, before metier d’art became fashionable, JLC was one of the handful of brands able to boast an in-house enameller. This specific piece is decorated with a reproduction of The Source by Jean Auguste Dominique Ingres, a 19th century French painter. It depicts a nude holding an upturned pitcher with water flowing out. The back of this watch is plain, but the Reverso à Éclipses can be decorated on the reverse as well. Each watch in the series was made in a limited edition of only three pieces in platinum, with a retail price of 128,000 Singapore dollars including 7% tax (equivalent to about US$102,000). Though the Reverso à Éclipses is no longer in the catalogue, it is available as a custom order.