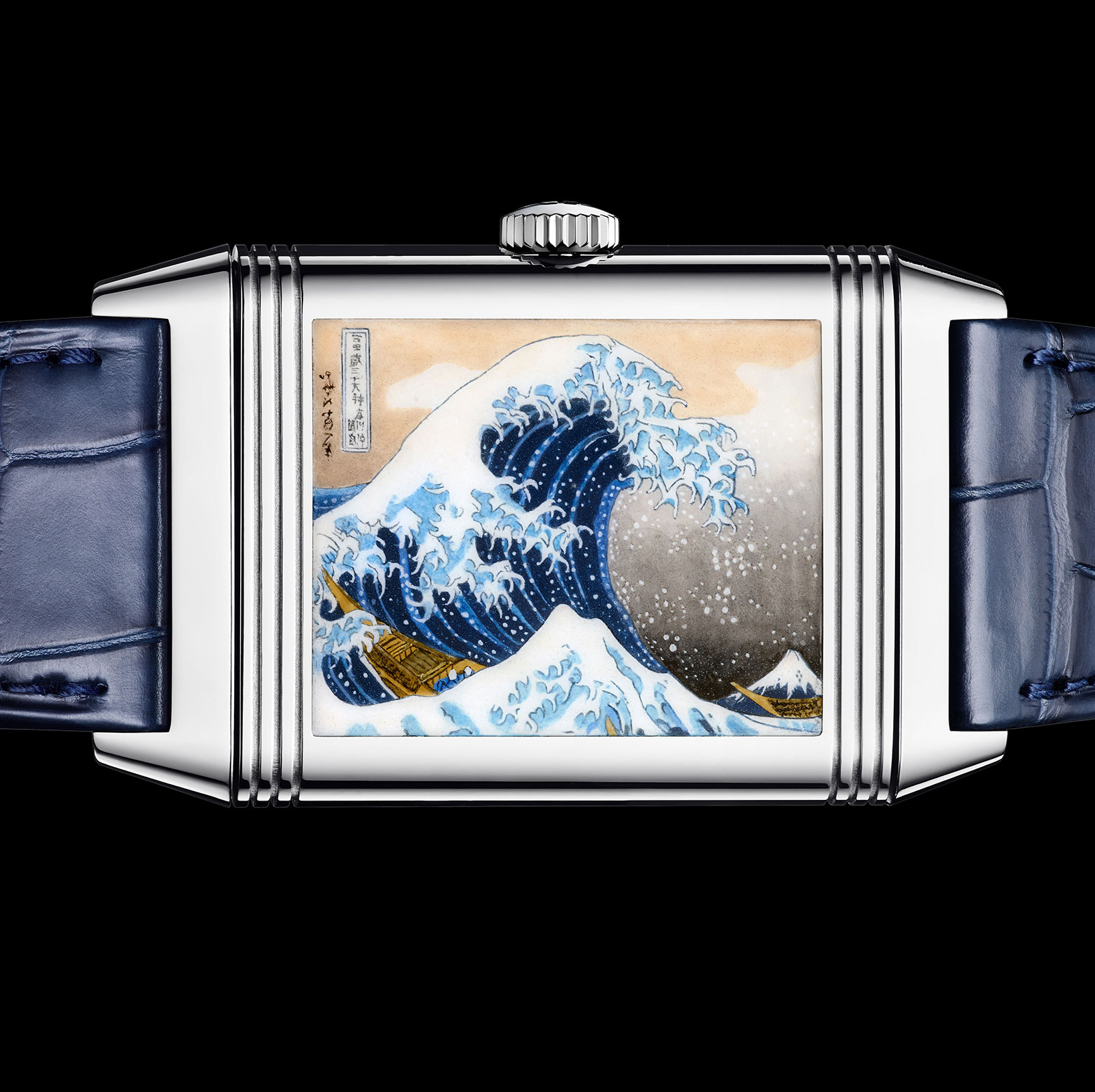 Historically a specialty of artisans in Geneva, miniature enamelling was taken up to the Vallee de Joux by Jaeger-LeCoultre in 1996, when Hungarian enameller Miklos Merczel  set up its enamel studio in 1996. Having retired just last year, Merczel was at his best when using the blank rear face of the Reverso as a canvas for tiny reproductions of famous artworks – paintings of paintings.

Though having been superseded in prominence by Jaeger-LeCoultre’s numerous complications, miniature enamel watches remain part of the collection, as subtle and intricate as they ever were. The latest mini-masterpieces is the trio of Reverso Tribute Enamel watches, each depicting a work of art by Georges Seurat, Xu Beihong and Hokusai. The Reverso Tribute Enamel Georges Seurat, A Sunday Afternoon on the Island of La Grande Jatte  (ref. 393 34 P1) reproduces the 1884 post-Impressionist painting. Arguably the most complex of the trio, the watch carries on its back a true to scale miniature of the original 3m long painting. New tools had to be developed to reproduce the Pointillism technique used by Seurat, including a brush with a fine yet hard tip. In total the enamel work took 70 hours. The Reverso Tribute Enamel Xu Beihong  (ref. 393 34 C1) replicates a section from a work by one of China’s most famous painters, who was active in the early 20th century. Best known for his Chinese ink paintings of galloping horses, Xu was one of the first to create monumental paintings with Chinese themes. Ironically the Reverso does the reverse, depicting a pair of horses from a section of a 5m long painting showing 10 of the galloping animals. One of the most works of arts in pop culture despite being 200 years old, The Great Wave Off Kanagawa is remarkably striking, yet intricate up close. It gives the same qualities to the Reverso Tribute Enamel Katsushika Hokusai, The Great Wave off Kanagawa (ref. 393 34 T1), which recreates the vivid blues and whites of the painting, while conveying the urgency and motion of the water. Different as they are on the back, the watches share the same specs. The cases are all 18k white gold, measuring 45.5mm long and 27.4mm wide, the same size as the Reverso Classic Large model. Inside is the cal. 822A/2, the workhorse hand-wound movement used in the Reverso since the early 1990s.

Notably, the dials on the front are also fired enamel, each in colours to complement the paintings on the back. The dials are executed in the champleve technique, consisting of an engine-turned dial base covered by translucent enamel. Each is limited to eight pieces, available only at Jaeger-LeCoultre boutiques. All are priced the same: €71,000 before taxes, or S$126,000.