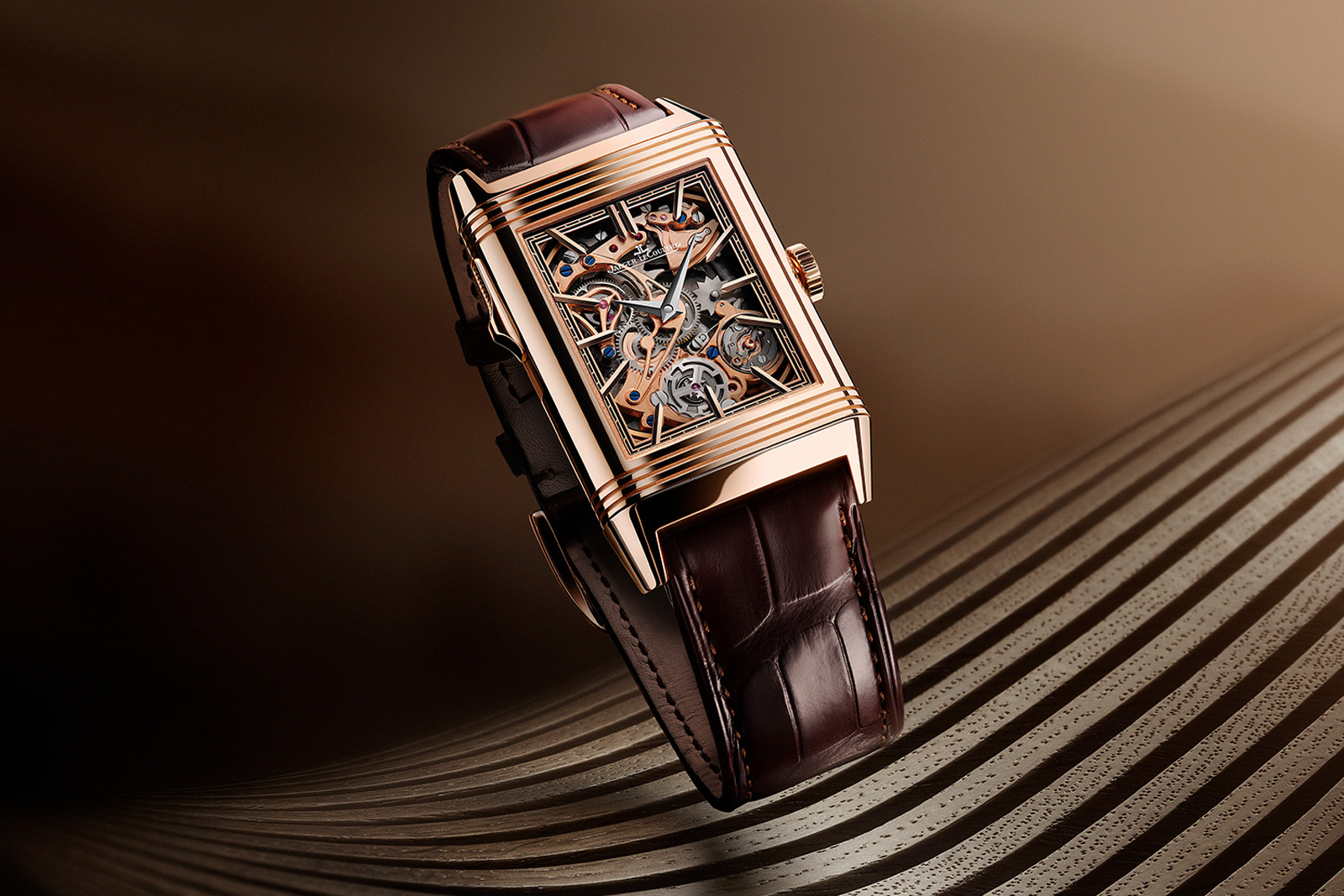 Debuted exactly 90 years ago a sports watch, the Jaeger-LeCoultre Reverso is famous for its swivelling case that was meant to protect the crystal. But in the modern day, the Reverso has paradoxically evolved into brand’s signature dress watch, as well as a canvas for assorted complications and artisanal decoration.

The latest 90th anniversary model falls into the former category – the Reverso Tribute Minute Repeater is highly complicated, with its mechanics visible on two open-worked faces: the chiming mechanism revealed on the front and the base movement on the reverse. 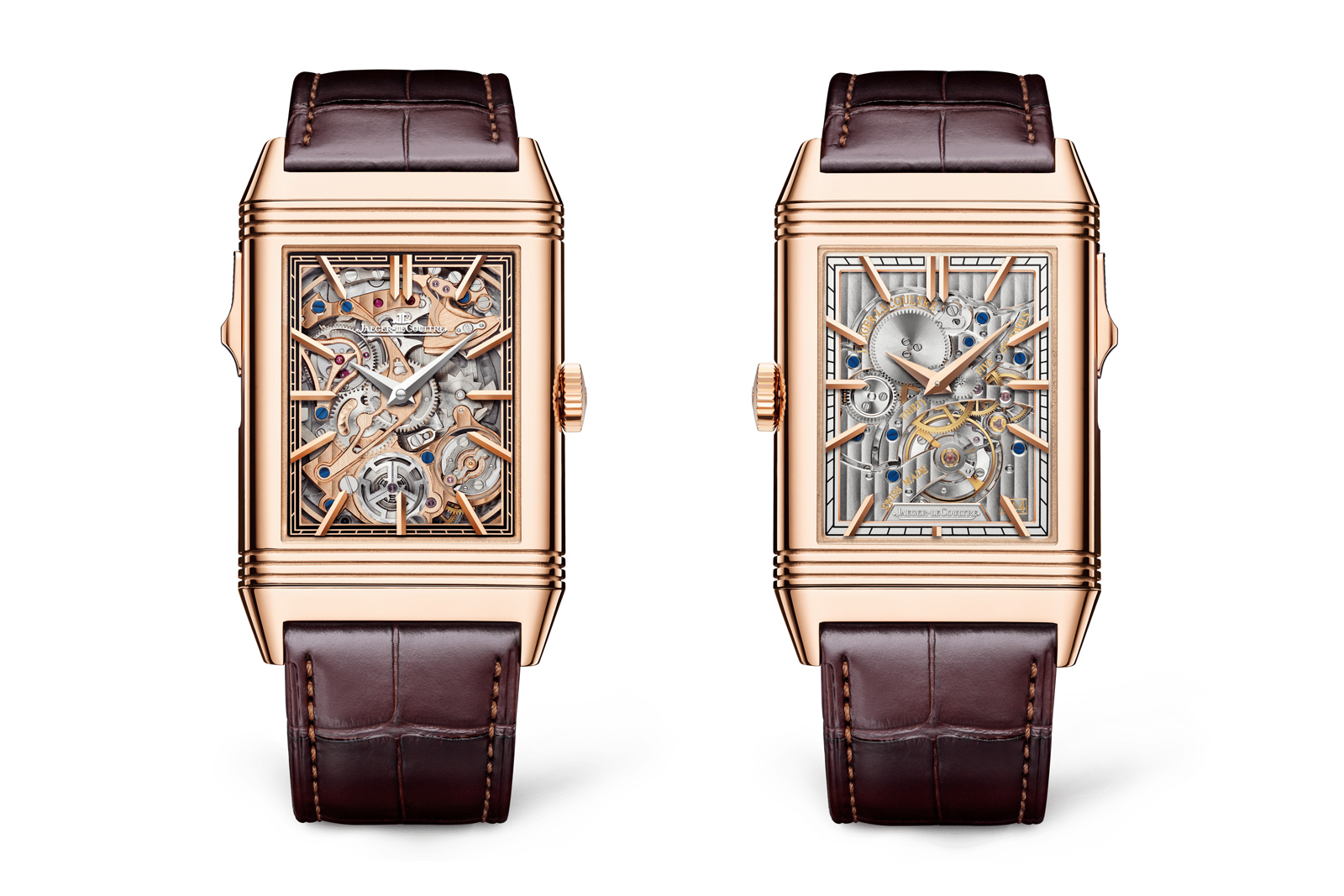 The front (left) with the repeater revealed, and the back showing the hand-wind calibre

The Reverso Tribute Repeater is an example of smart engineering and design, executed in a way that is possible only with the Reverso’s two faces. Notably, doing away with a solid dial is actually a technical necessity (more on that later), rather than mere vanity, but it leaves the watch looking as impressively complicated as it is.

Though a modular repeater, its repeating mechanism is no ordinary example, but instead incorporates two proprietary innovations that compound to produce louder chimes, namely the extra-large hammers and the gongs that are located as close to the wearer as possible – they are attached onto the front crystal, hence the absence of the dial. 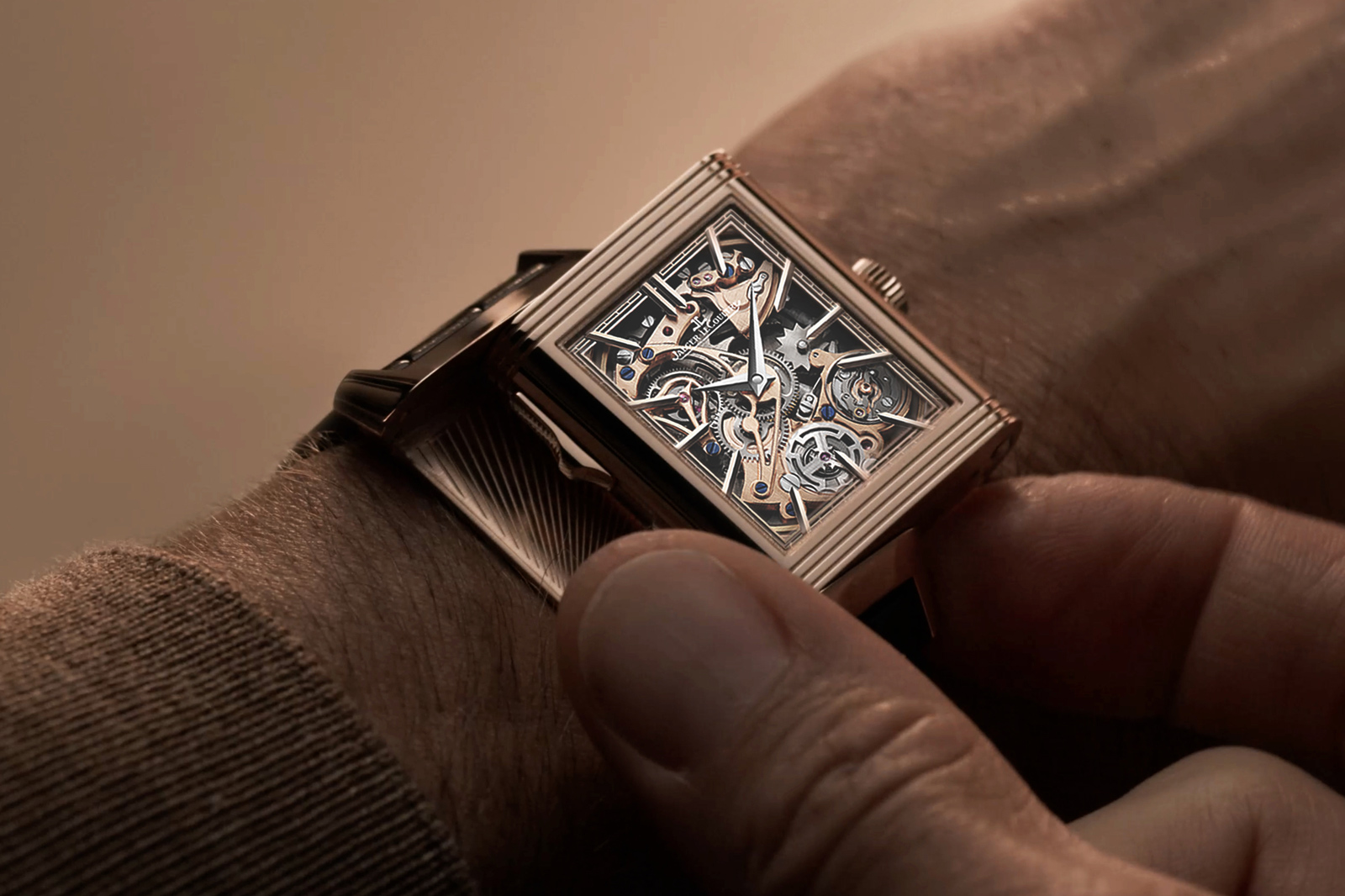 Upon activation, the slider on the left winds up the mainspring at six o’clock, which unwinds to power the repeater

That said, the innovations aren’t new. In fact, the Reverso Tribute Repeater is nearly identical to the Reverso Répétition Minutes à Rideau that debuted a decade ago – both are powered by the same calibre – with the only differences being the vertical alignment of the movement, and the simplification of the repeater-activation mechanism, which did away with the fancy metal curtain of the Rideau in favour of a conventional slide.

Then there’s the size, which is a huge 51 mm by 31 mm, making it almost as large as the mega-complicated Hybris Mechanica that’s a lot more complicated. In comparison, the simplest, two-hand Reverso is just 40 mm long and 24.4 mm wide. The size means the repeater will wear too big, especially given its rectangular form, but it does admittedly look magnificent, because the imposing sizing goes well with the mechanically-complex appearance.

Despite being a variant of an existing watch, the Reverso Tribute Repeater is a shrewd launch, because it repurposes a model that’s now obscure but combines two of the brand’s biggest strengths: the iconic case and technical prowess.

At a glance the watch appears skeletonised, but it merely has no dial. Doing away with the dial reveals the striking mechanism in all its glory, creating an elaborate landscape that evokes a skeletonised movement.

Notably, legibility has not been sacrificed with the removal of the dial, as the front still has an outer minute chapter ring with hour markers cantilevered on it. 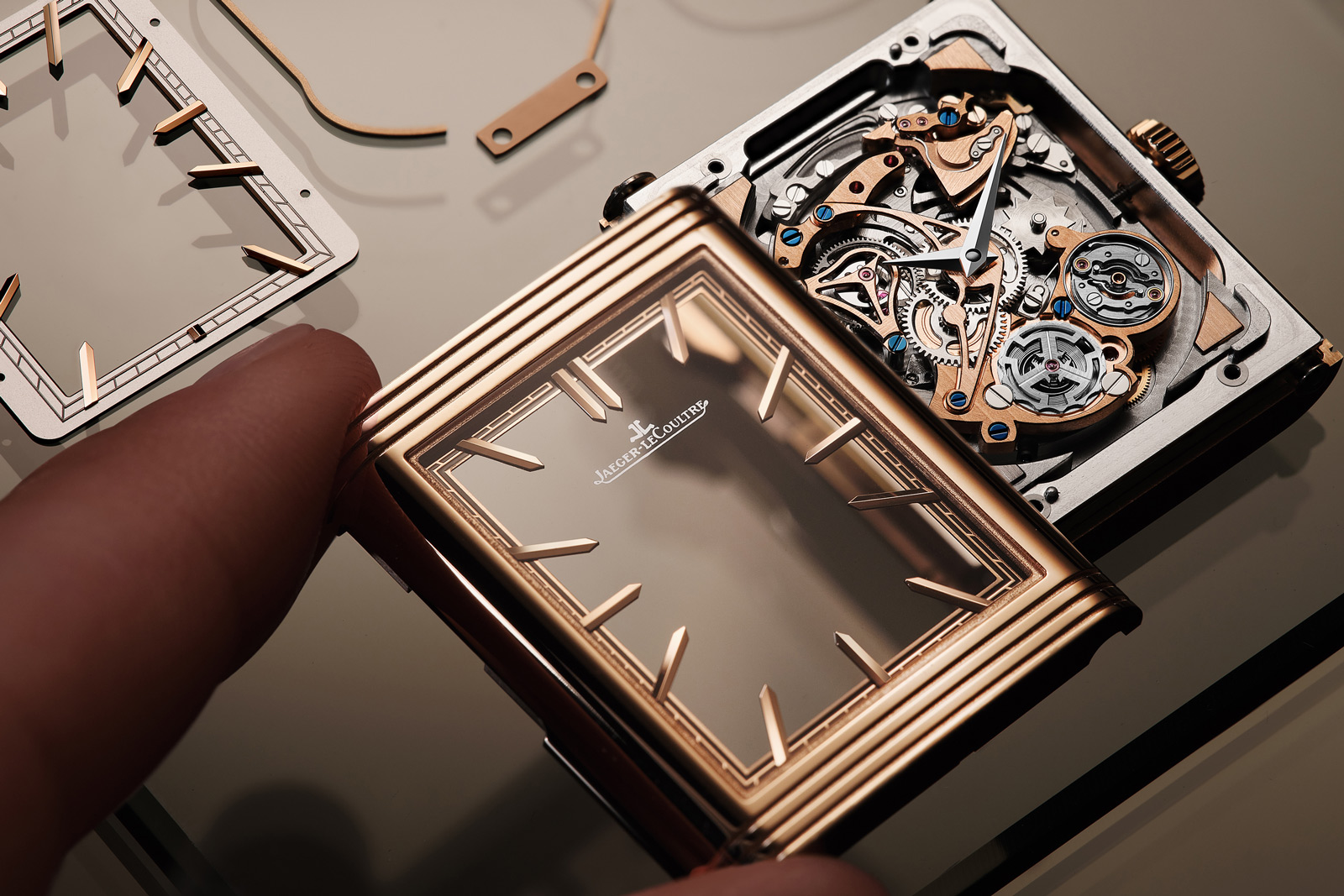 But the best part sits within the chapter ring, for rare is a calibre with the chiming mechanism full exposed – on the front no less. The secondary mainspring that powers the repeater sits at around six o’clock, just beside the governor that regulates the tempo of the chime.

And at one o’clock, a pair of catapult-like hammers can be seen – the proprietary “trebuchet” hammers with twin, spring-loaded pivots that ensure more powerful strike – a patented invention that debuted in 2009.

Also visible – but more obvious when the repeater is chiming – is the rack, a part of the mechanism that “measures” the time and converts it into chimes. 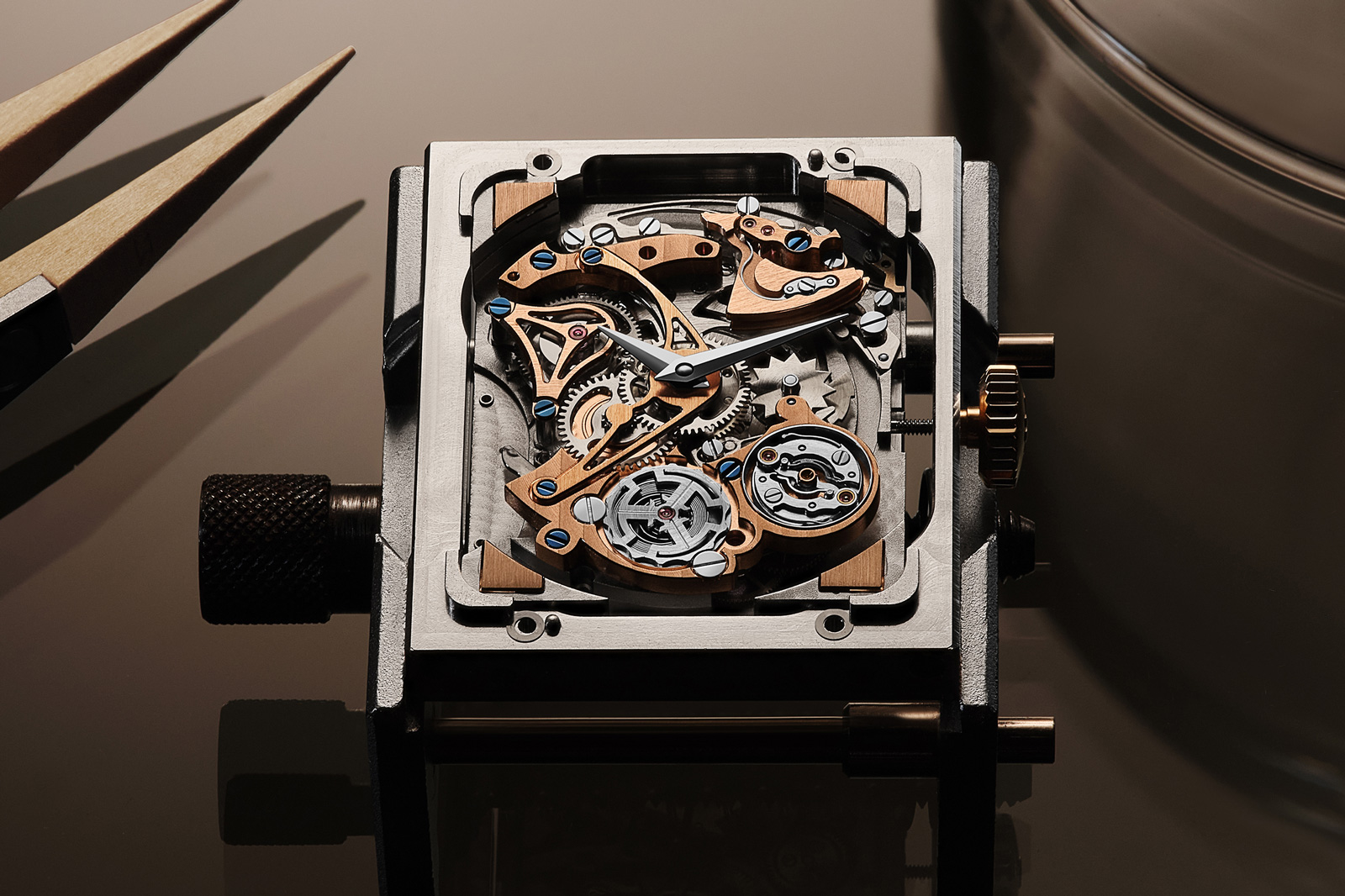 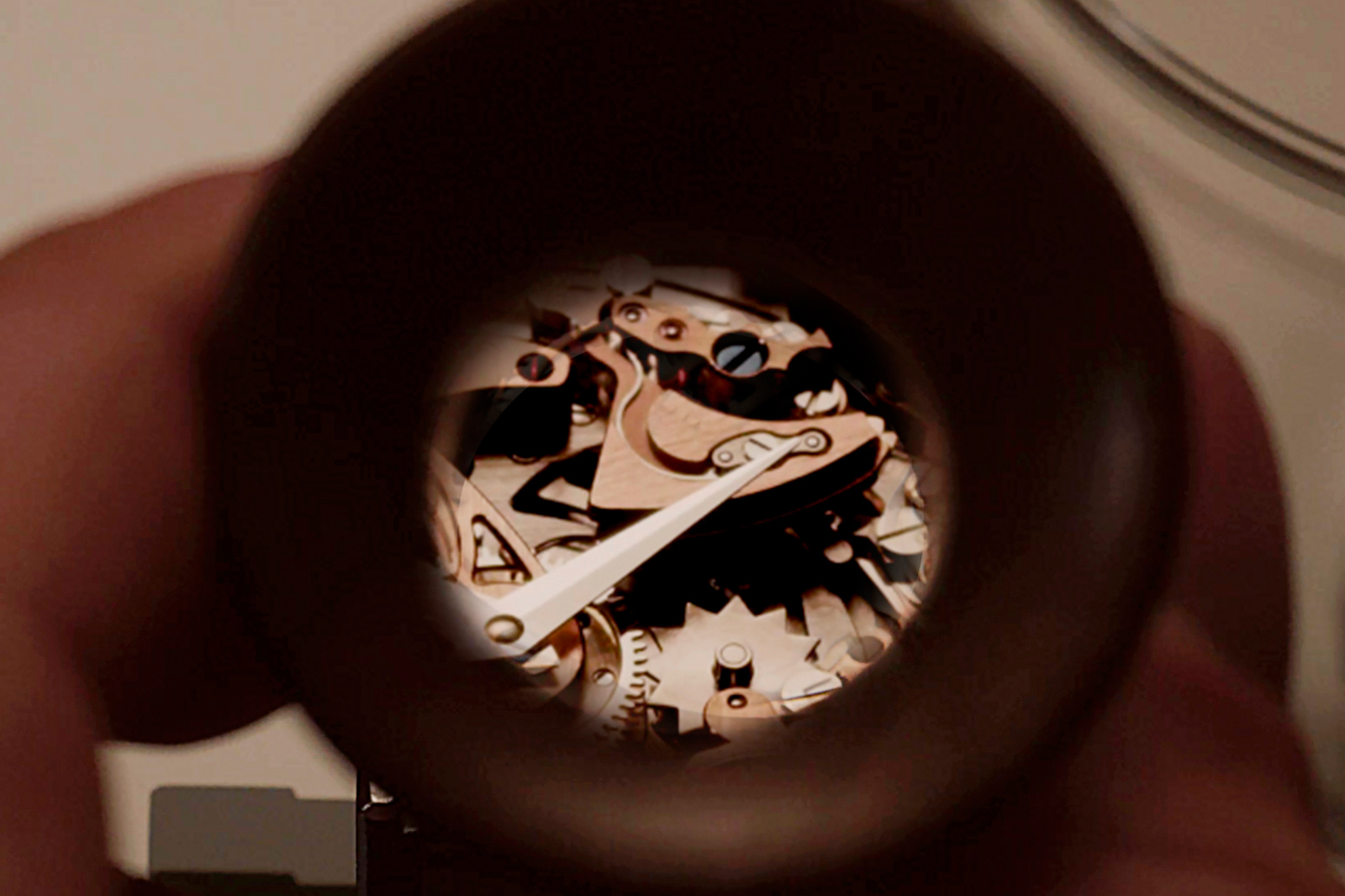 And the back is designed similarly, without a dial but with another pair of hands that show the same time as the front.

The reverse is less intriguing, but it does show almost all of the base movement, indicating that the repeating mechanism is a module on the front. And it also reveals that the barrel is small – by virtue of the compact base calibre – explaining the short, 35-hour power reserve. 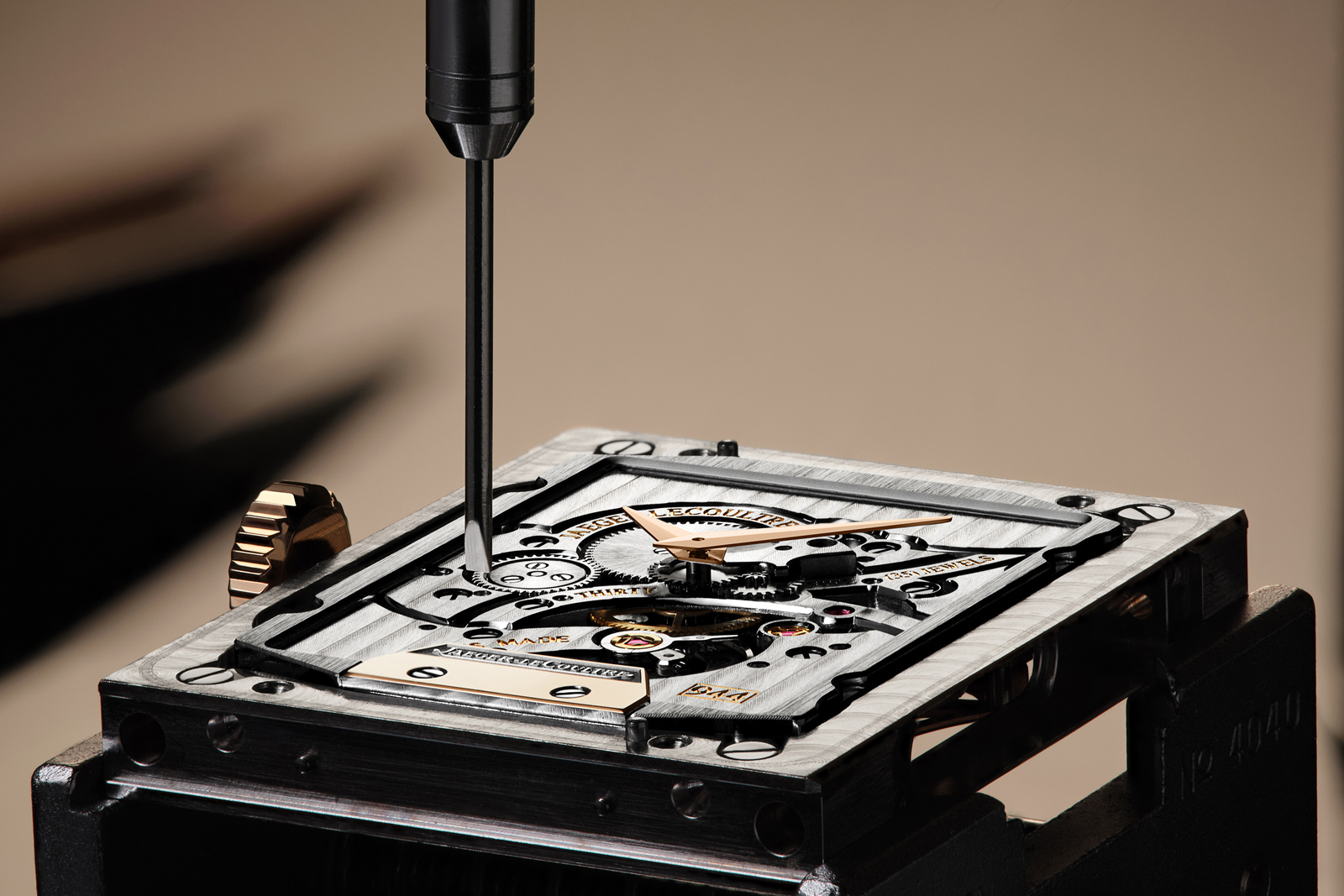