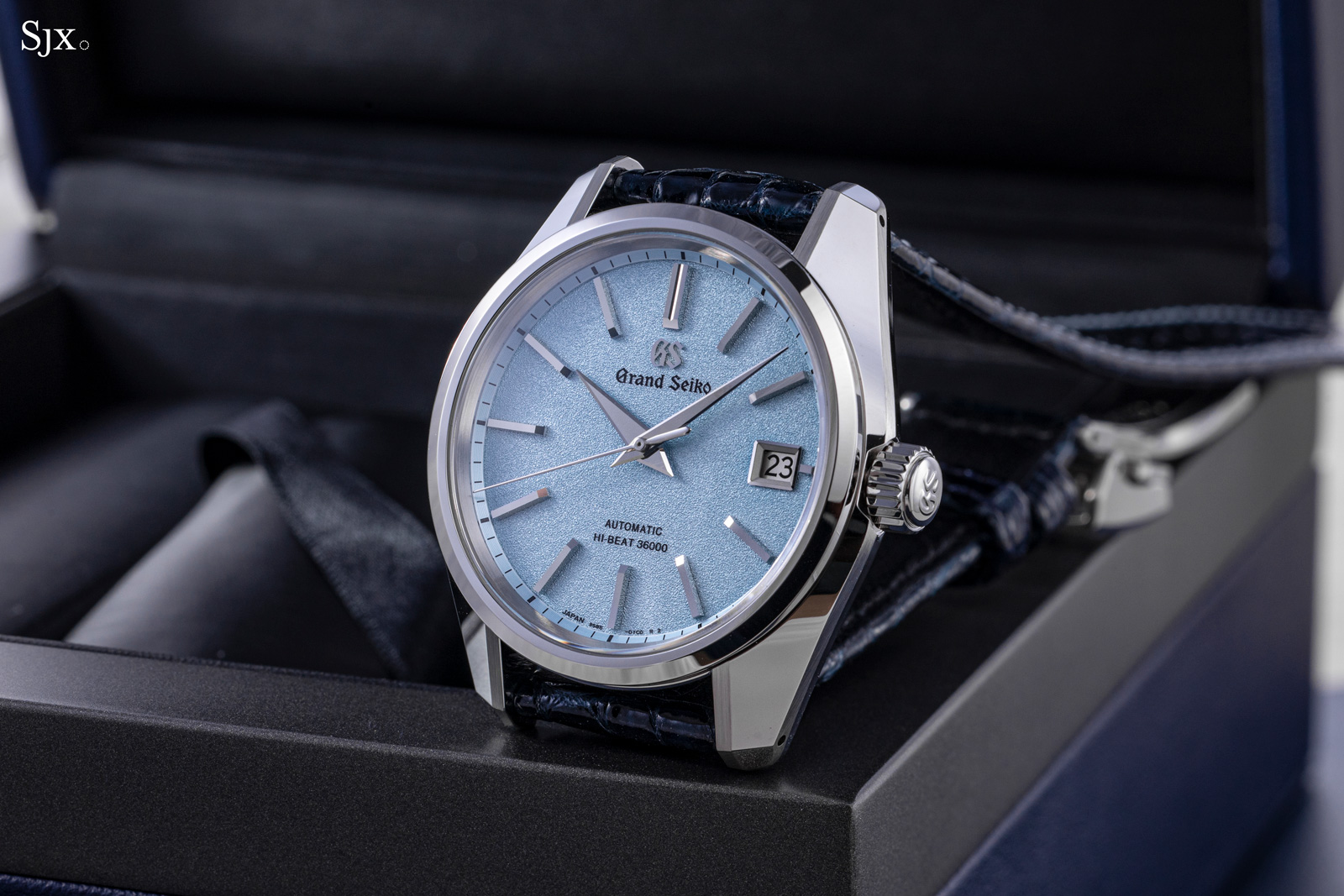 For the third year running Grand Seiko’s distributor in Southeast Asia gets a limited edition exclusively available in the markets it represents, namely Brunei, Hong Kong, Macau, Malaysia, and Singapore.

Following the large and sporty “Champagne Diamond” of 2020, this year’s edition is just right in terms of size, style and function. The Heritage Collection SBGH287 “Snow on Blue Lake” is classic Grand Seiko – it’s an automatic with time and date – in a compact, 40 mm package that’s quintessential Grand Seiko in style.

But its best feature – as is often the case with Grand Seiko limited editions – is the textured dial that’s finely grained and rendered in pale blue, a colour meant to evoke fresh snow as it reflects the colour of the blue sky. 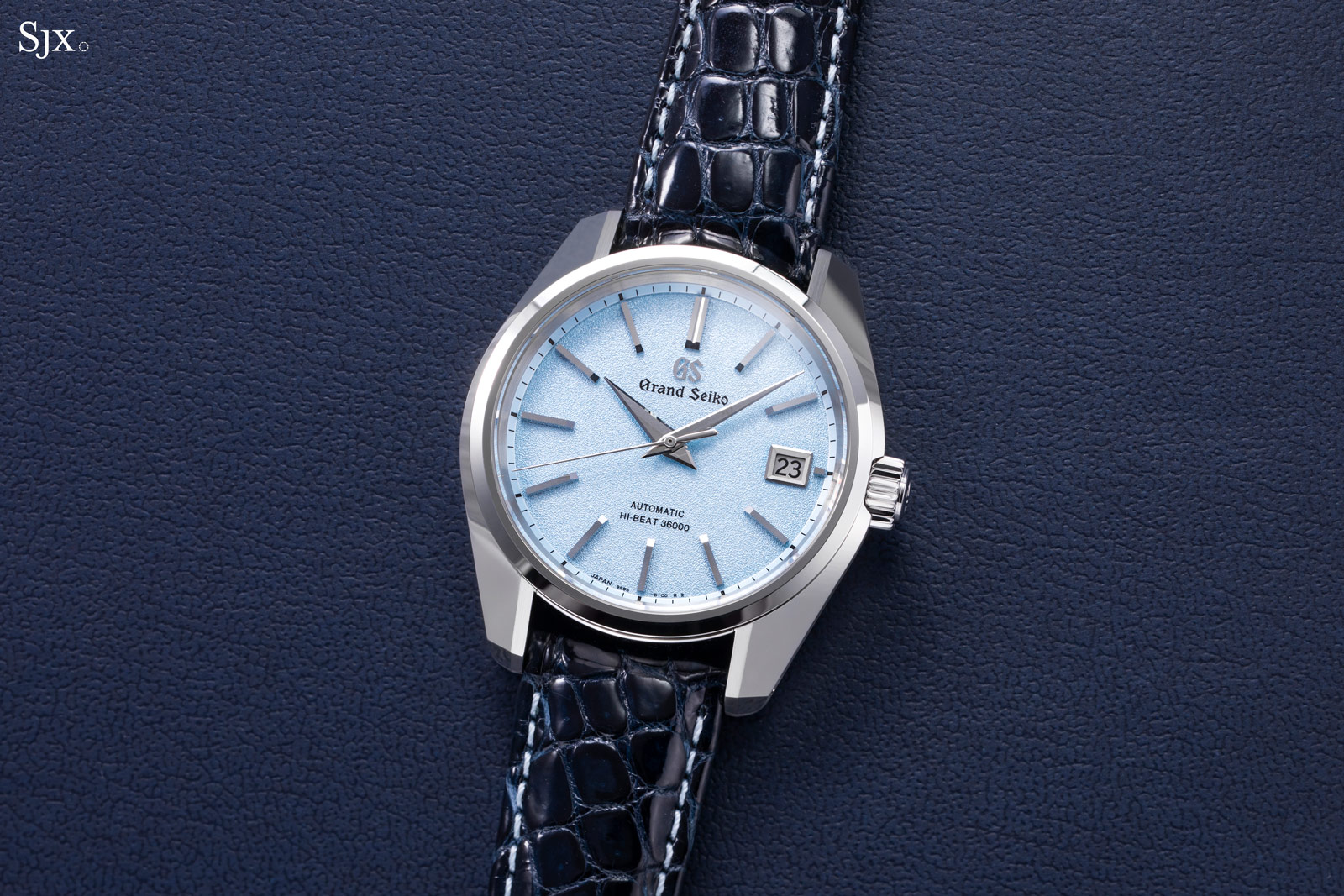 Going by its previous editions, it is clear that Grand Seiko’s representative in the Southeast Asia, Thong Sia Group, has a good eye. With the brand already offering a seemingly endless stream of iterations in familiar colours and textures, it is surely challenging to conceive of something that combines existing elements while still being unusual and tasteful, but Thong Sia and Grand Seiko aced it.

With its light blue palette, the dial of the SBGH287 calls to mind past models like the SBGA407 “Blue Snowflake” and SBGY007 “Omiwatari”, but its texture is different from either of the two. The finish is granular and slightly sparkly, living up to its snowy nickname. 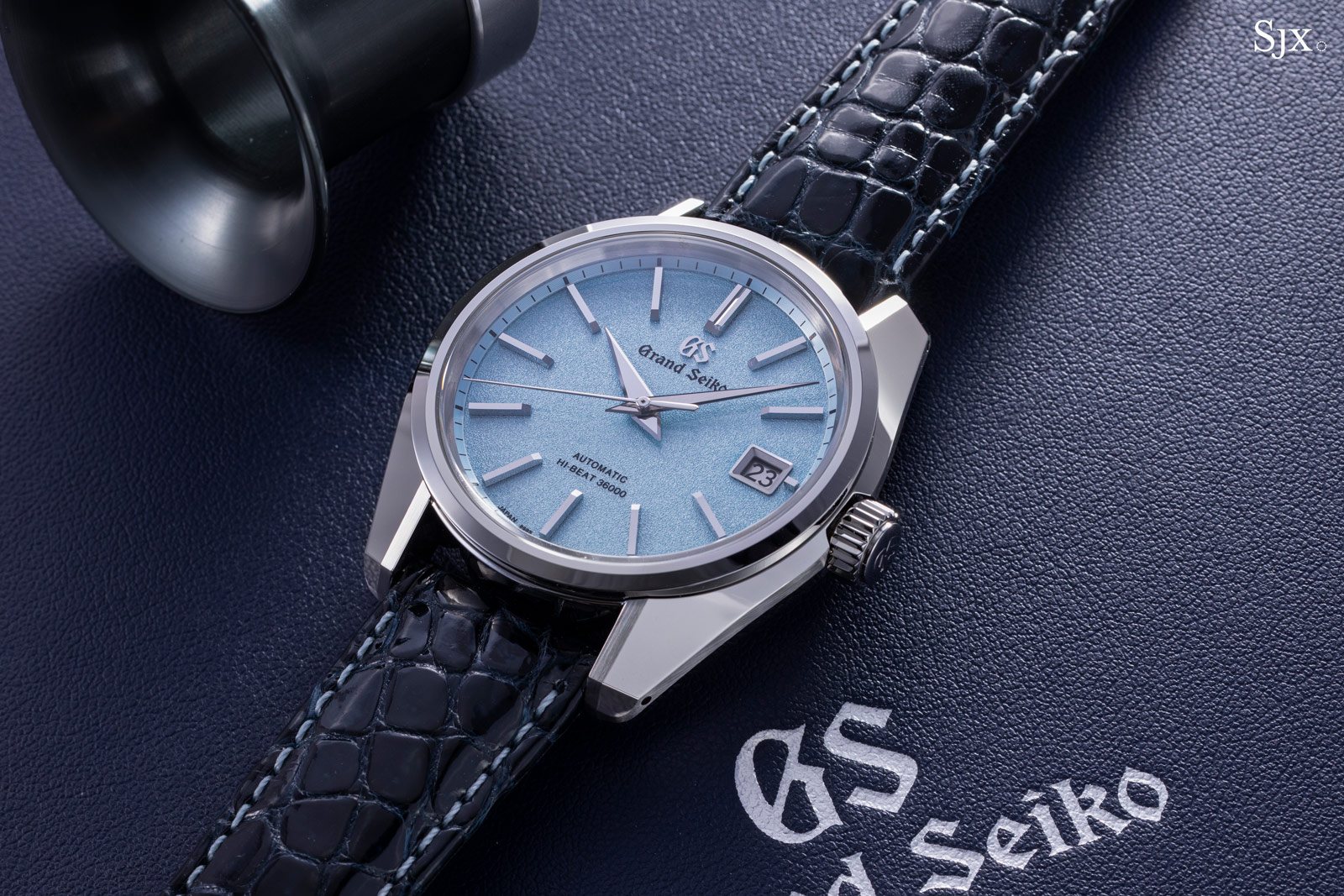 Dial aside, the rest of SBGH287 is pretty much stock, but it is fortunately based on an uncommon model. The SBGH287 is based on the time-and-date “44GS” Hi-Beat, a model that’s relatively obscure with only two other relatives in the Seiko catalogue, the SBGH277 and SBGH279.

A defining feature of the model are the sharp and clean lines on both the case, hands, and hour markers. With its wide, sloping flanks, the case is distinctive, though it’s widely used across the Grand Seiko model range. The hour markers are more unusual – they are narrow and tall, giving them an elegant air that’s quite different from the extra-wide markers now favoured by Grand Seiko. Limited to 140 pieces, the SBGH287 is a rather small run since it is a regional edition. Grand Seiko limited editions for the world market, in contrast, typically number in the high hundreds or even low thousands. The small number certainly adds to its appeal.

Grand Seiko does put out a good number of limited editions every year, but the SBGH287 manages to be different in both colour – it’s not green – and case style since it uses a less-common model as a base.

Priced at around US$6,500, the SBGH287 costs about the same as the standard model, which is a big plus. It does, however, lack the bracelet that comes with the standard Hi-Beat “44GS”. The special dial and limited number do make up for that. 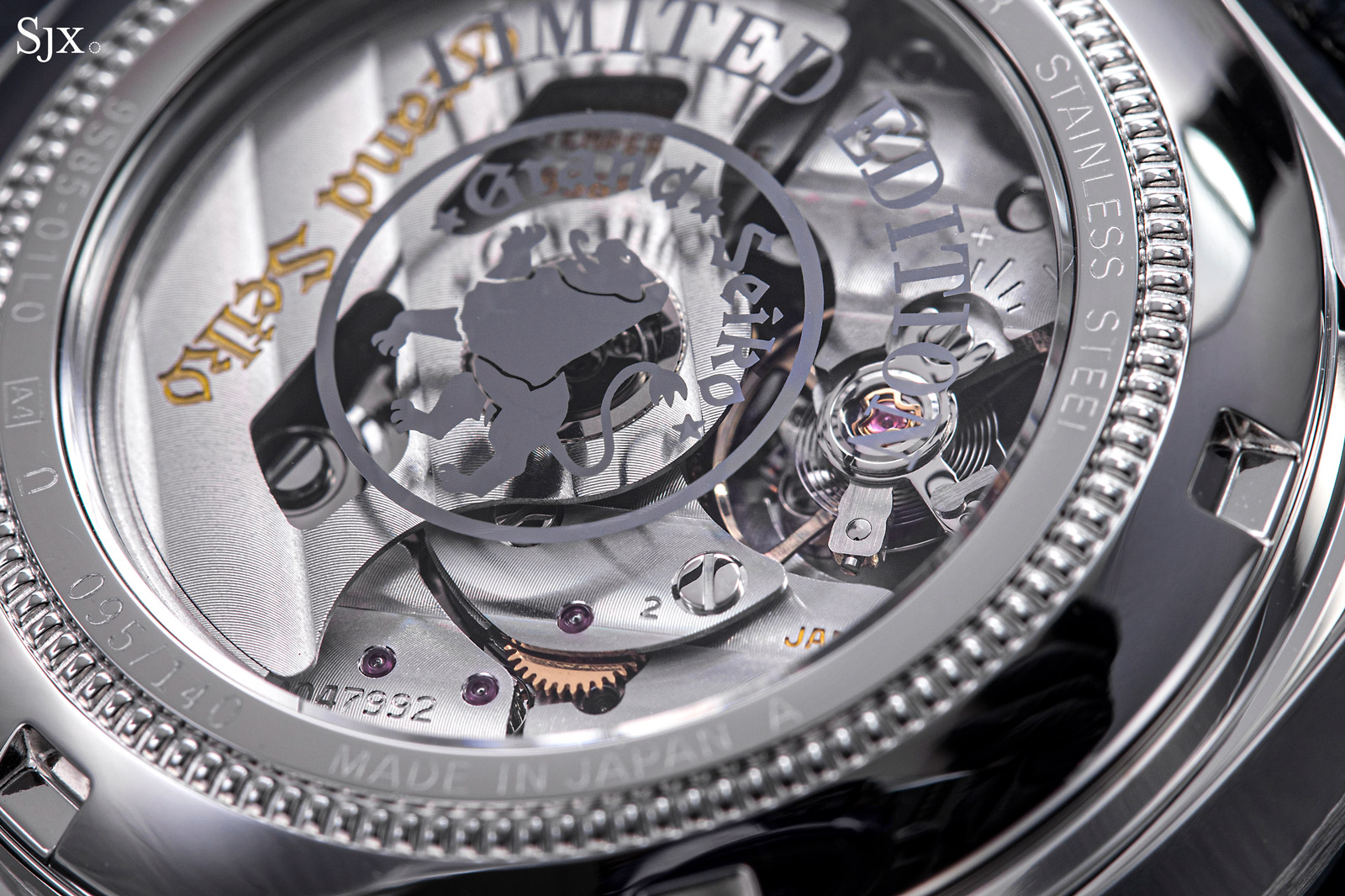 The watch is individually numbered, albeit in a tiny font that contrasts with the oversized Grand Seiko emblem printed on the sapphire back

Snow on a blue lake…

As it is with most Grand Seiko watches, particularly the limited editions, the focal point of the SBGH287 is clearly the dial.

Since the watchmaker announced that the “The Nature of Time” would be its guiding force in design, dial colours and textures inspired by the local landscape around Grand Seiko’s factories have grown in number. The SBGH287 is similarly inspired by nature, and combines elements from past models in a novel manner. 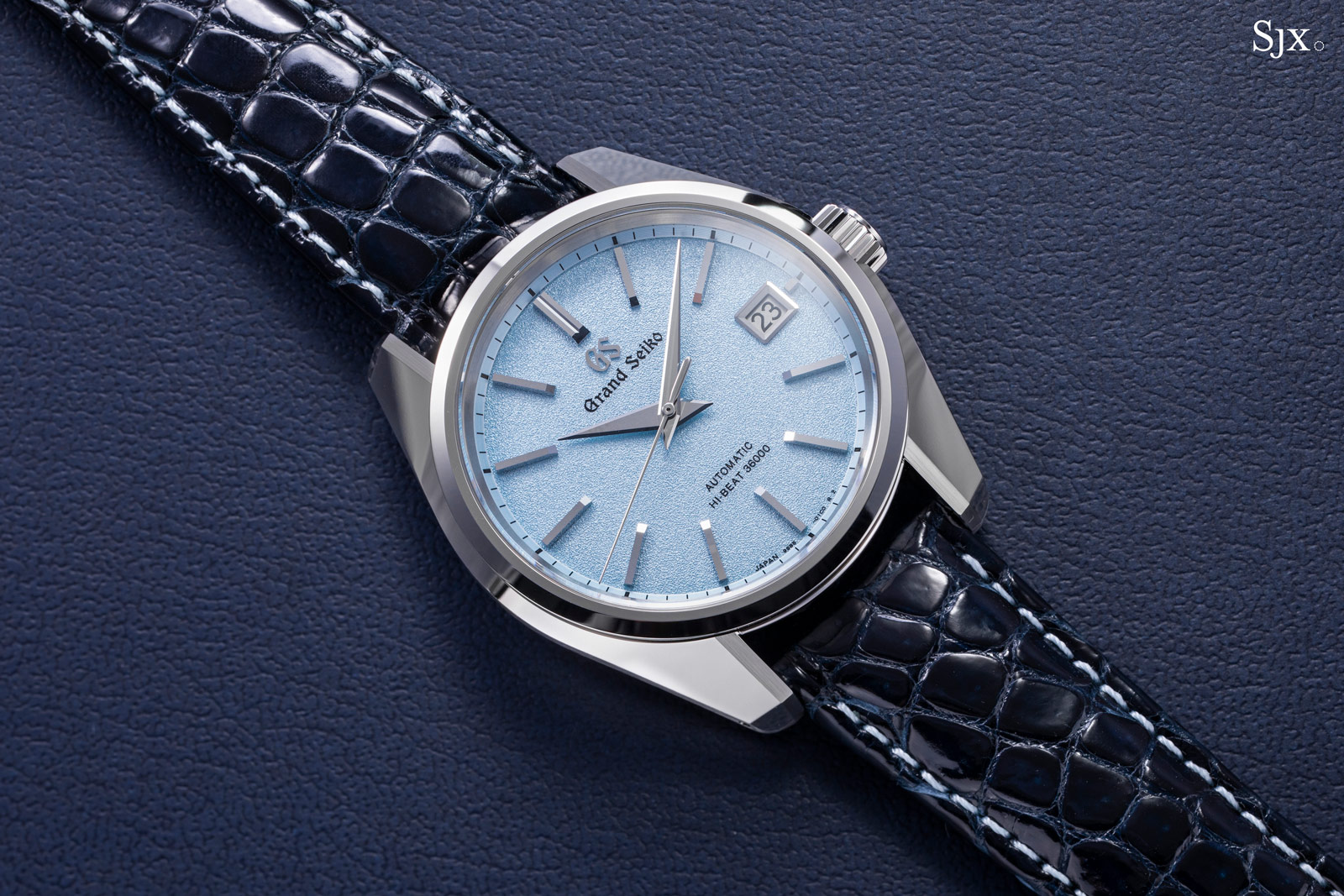 The grained texture of the dial can be found in previous models, including the GMT SBGE269 “Tōji” of the “Seasons” collection, another watch inspired by Japan’s winter landscape. That said, this powdery, snow-like texture is usually executed in bright silver, rather than blue as it is here.

On the other hand, pale blue is a recurring colour on Grand Seiko dials. One of the more prominent examples is the SBGA387 “Kira-zuri”, a limited edition created in 2018 for the American market. And more recently, there are the “Blue Snowflake”, “Omiwatari”, as well as the SBGJ249 “Shōsho“. None of them, however, were done with a grained finish.

Despite being a shuffle of the deck in some ways, the combination of colour and texture is new, resulting in a dial that’s surprisingly refreshing, 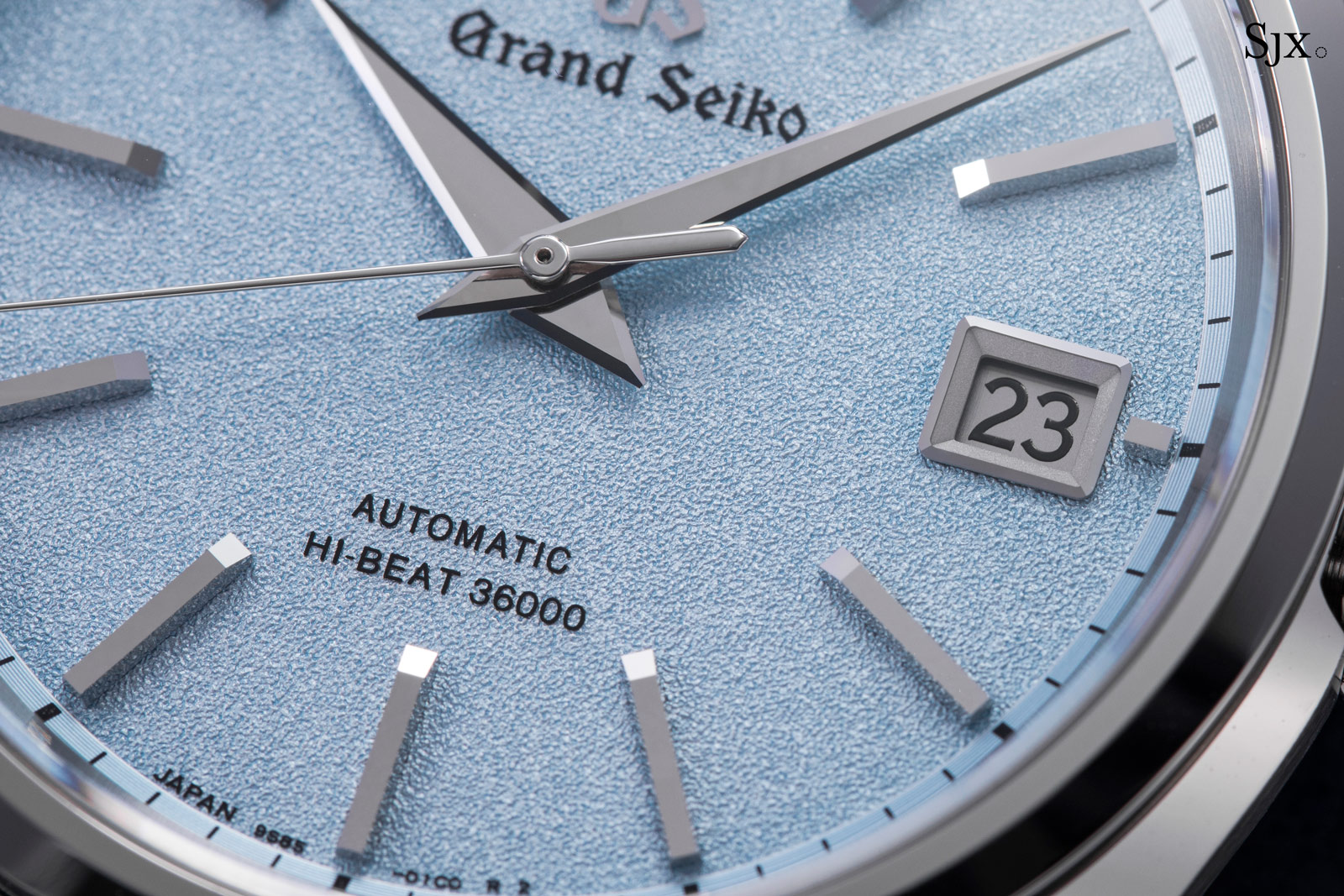 Given that Grand Seiko dials are often heavily textured, the subtlety of the SBGH287 stands out. At a distance, the dial texture isn’t obvious, but up close the dial reveals its detail.

In fact, the pronounced grain of the dial even brings to mind the hand engraved finish sometimes known as “tremblage”. That might be because the original template of the dial stamp was finished by hand.

The granular texture gives the dial depth that is enhanced by an obvious layer of clear, protective lacquer on top that also gives the dial a slightly glossy sheen.

The face of the watch also has a physical depth, because the flange around the dial is tall and steeply sloped, which puts the crystal a distance above the dial. 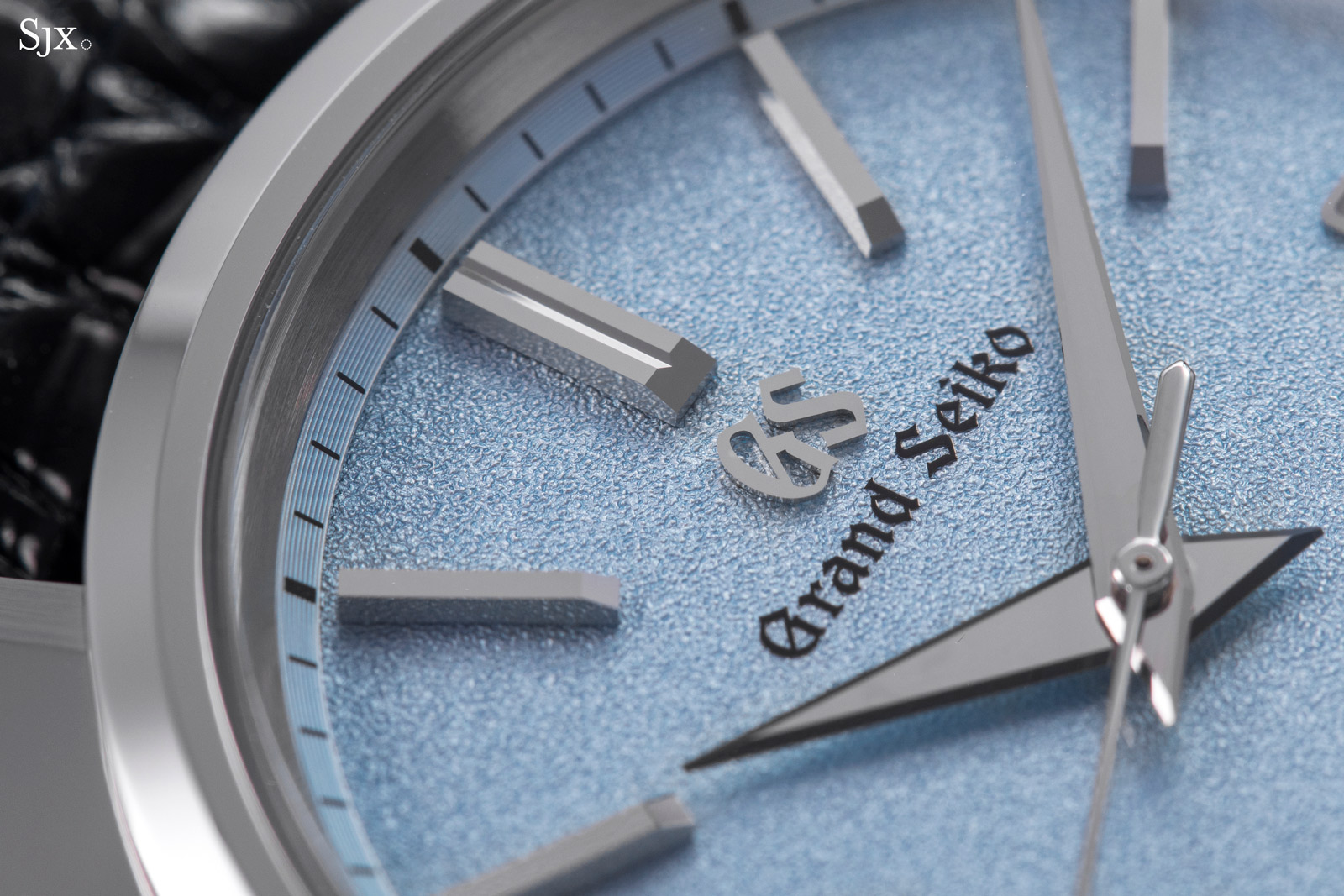 The seconds scale on the flange has a concentric linear finish

To go with the subtly-finished dial is a discreet set of hour markers. The baton indices are slim and tall – though the 12 o’clock marker is the traditional double baton – giving the dial a restrained appearance that resembles a formal dress watch. Notably, these hour indices are not common among the brand’s offerings.

The date does get in the way of the elegant face, though it is arguably a signature feature of Grand Seiko, having been found on the brand’s earliest watches, including the vintage “61GS” from 1968, which was essentially a “44GS’ with a Hi-Beat movement and calendar function. Removing the date would, however, have made this a minimalist dress watch with Grand Seiko flair. 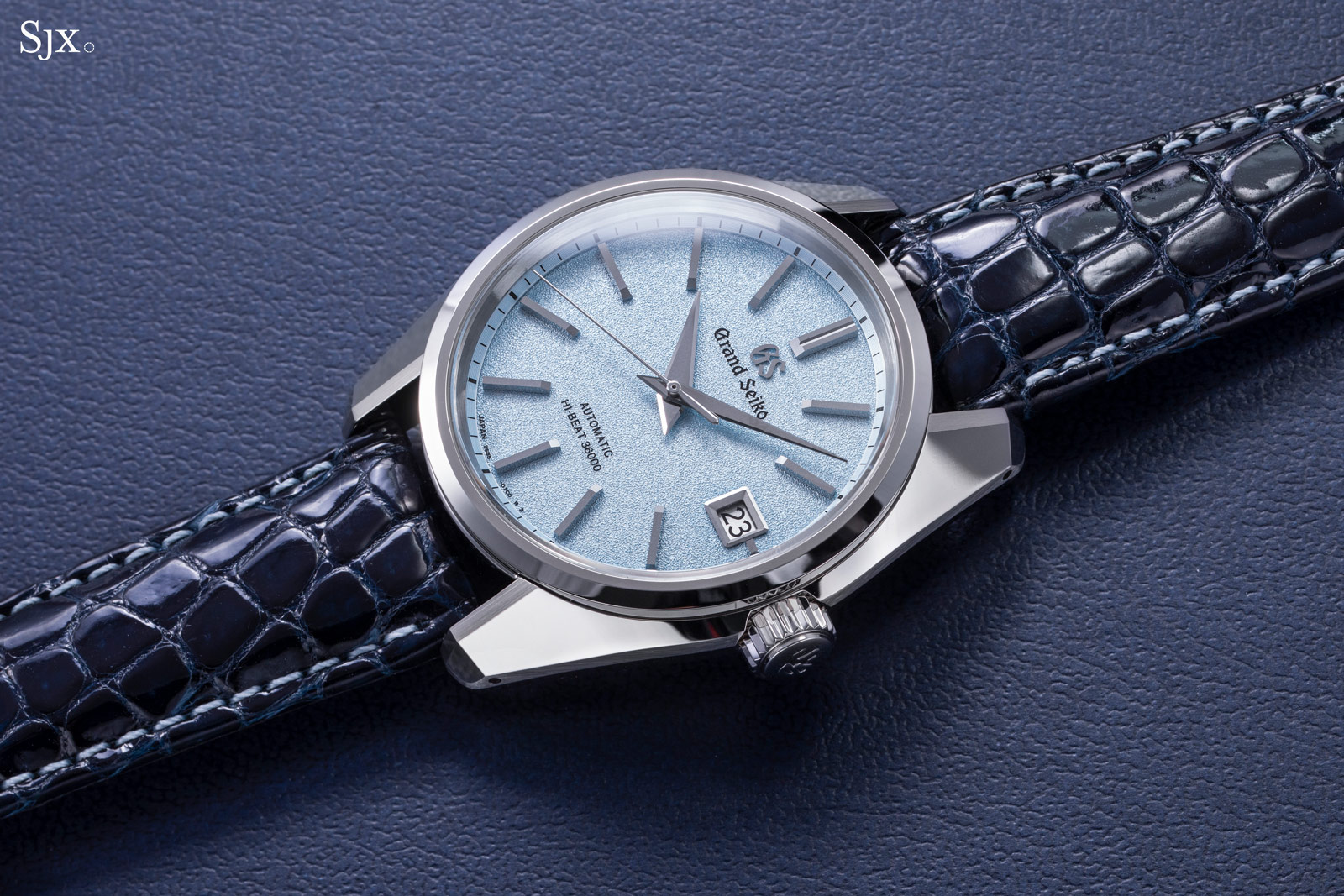 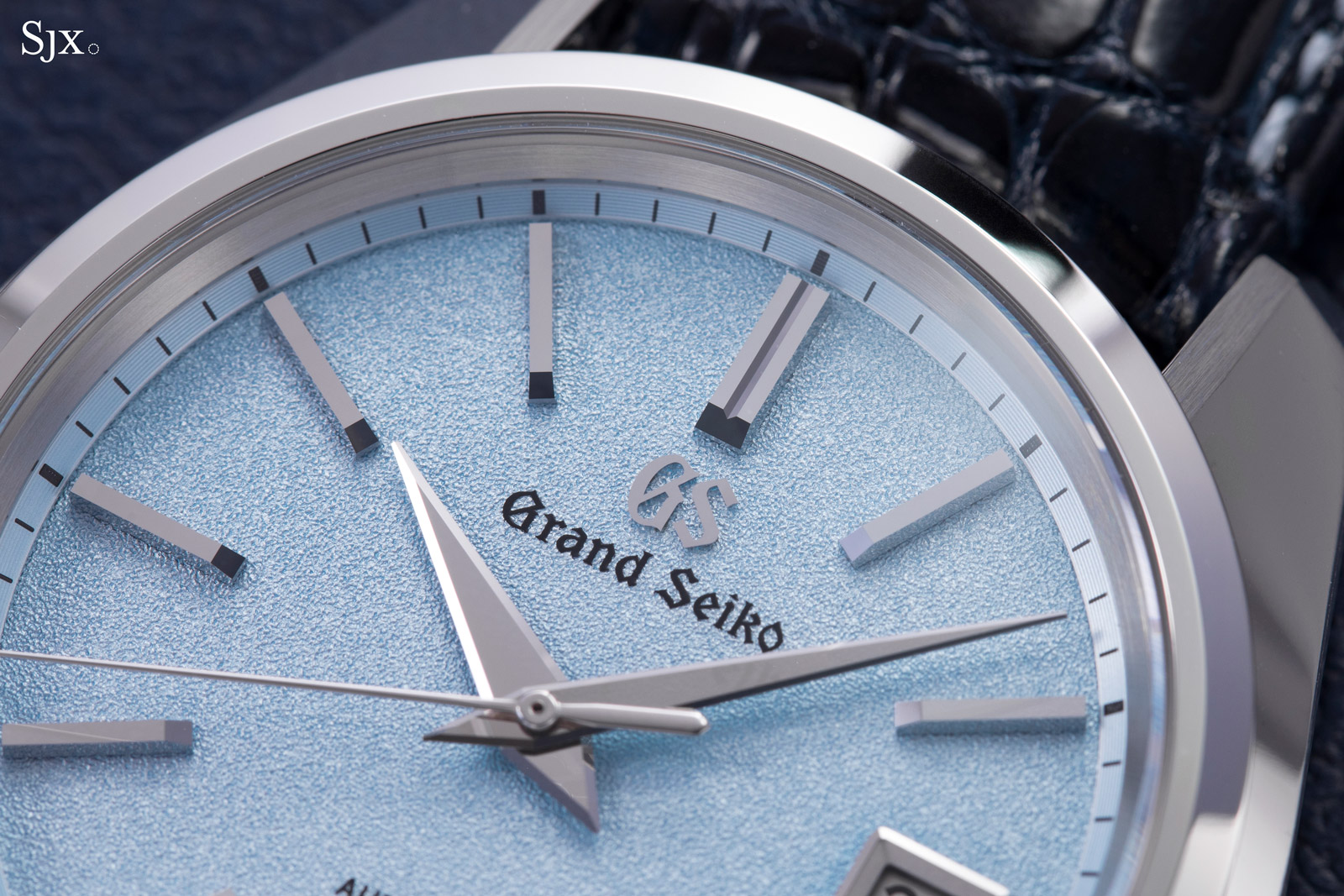 Fans of the brand will easily recognise the lines of the case. It’s a reinterpretation of the “44GS” of 1967, which was named after the cal. 4420 within.

Multi-faceted and impressively polished, the 44GS case is stunning in the metal, largely because of the exaggerated bevels that run along the flanks. Though not overly large, the bevels are massive and angular, giving the watch a masculine and imposing feel, especially up close. 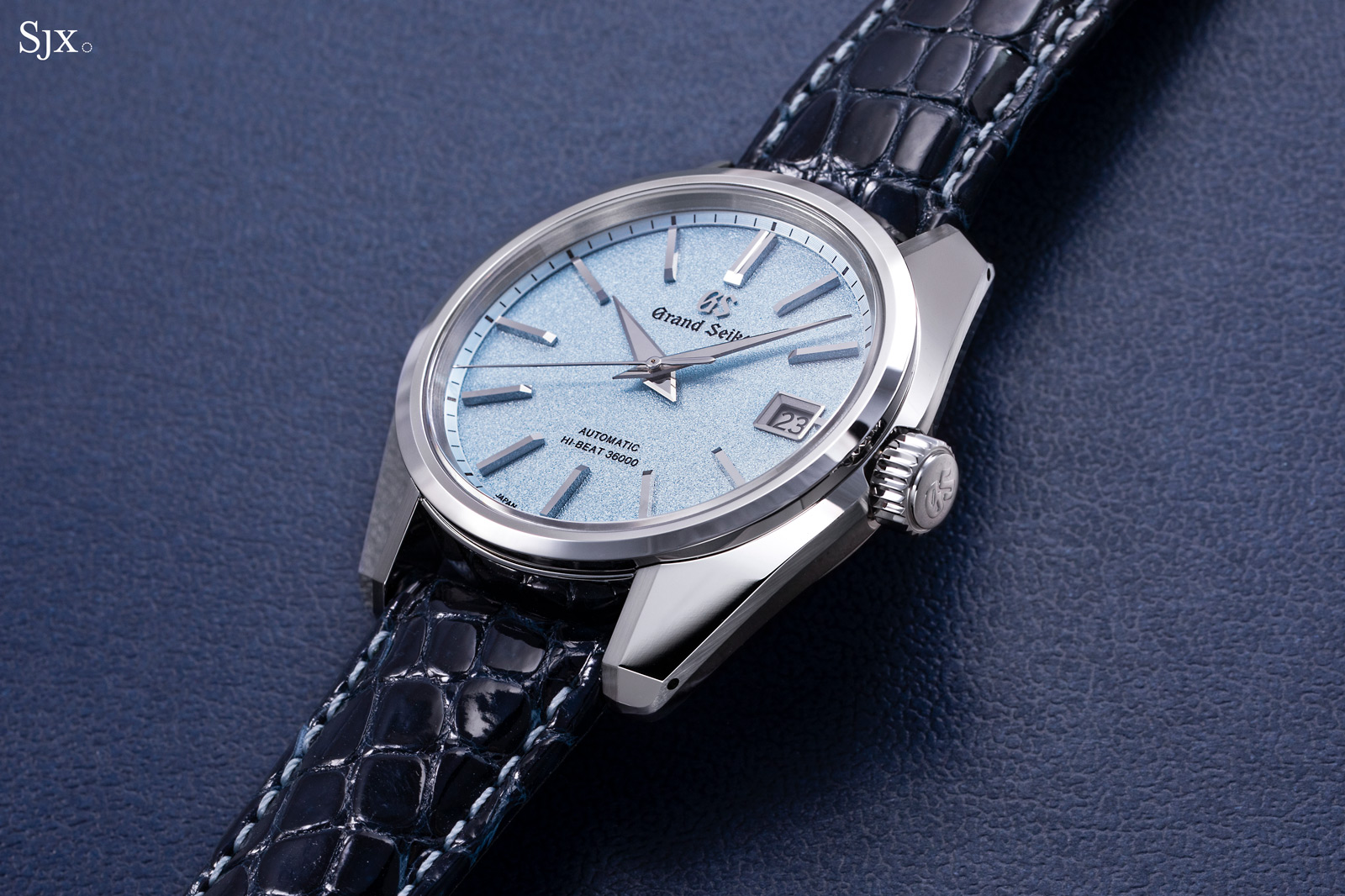 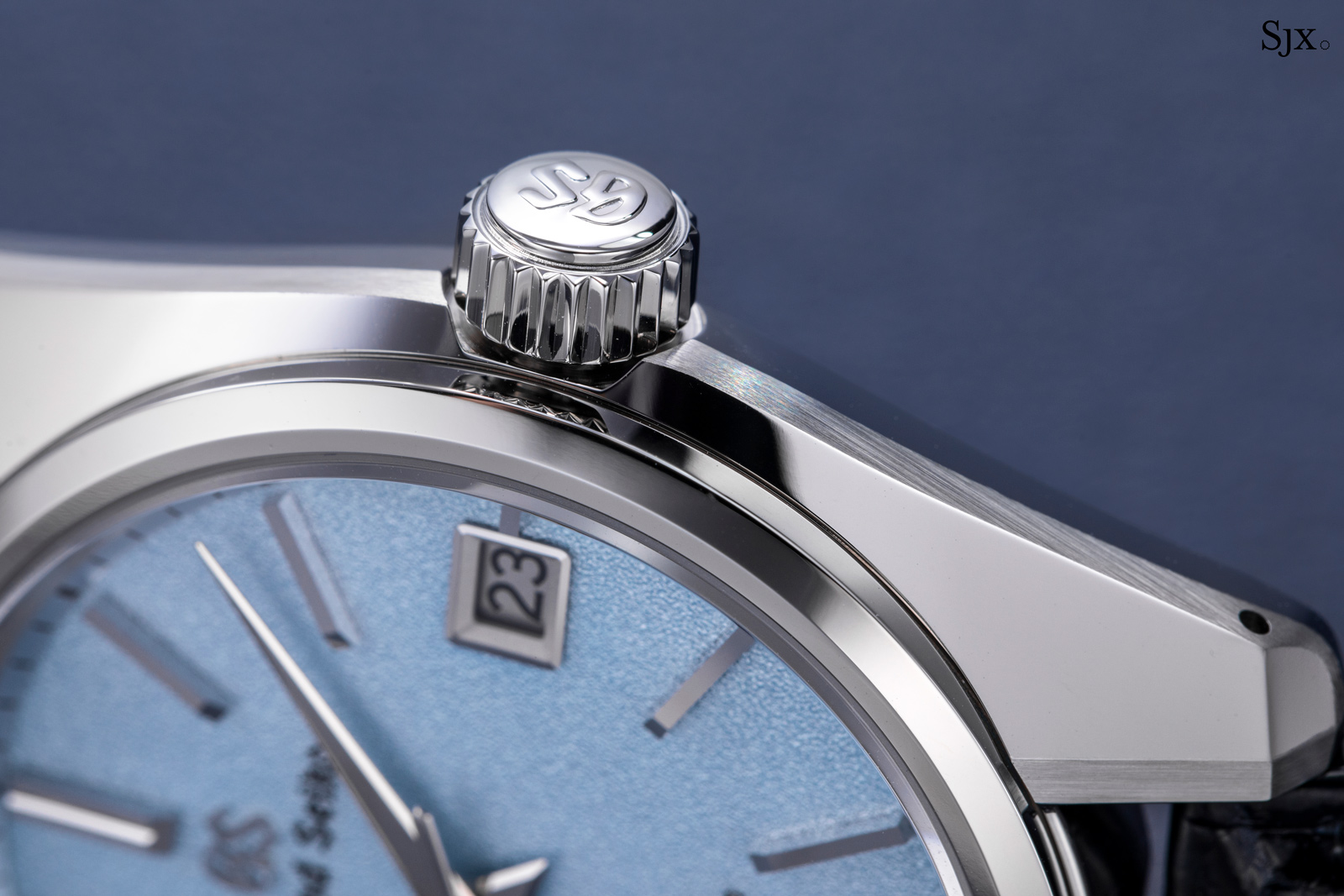 While I do like the 44GS-inspired case here, I do wish Grand Seiko recreated the 44GS case as it was in 1967, in its original proportions with those and retro lugs. That was done for the 44GS limited edition of 2013, though not since. A case identical to the vintage original matched with this blue dial would be exceedingly striking. 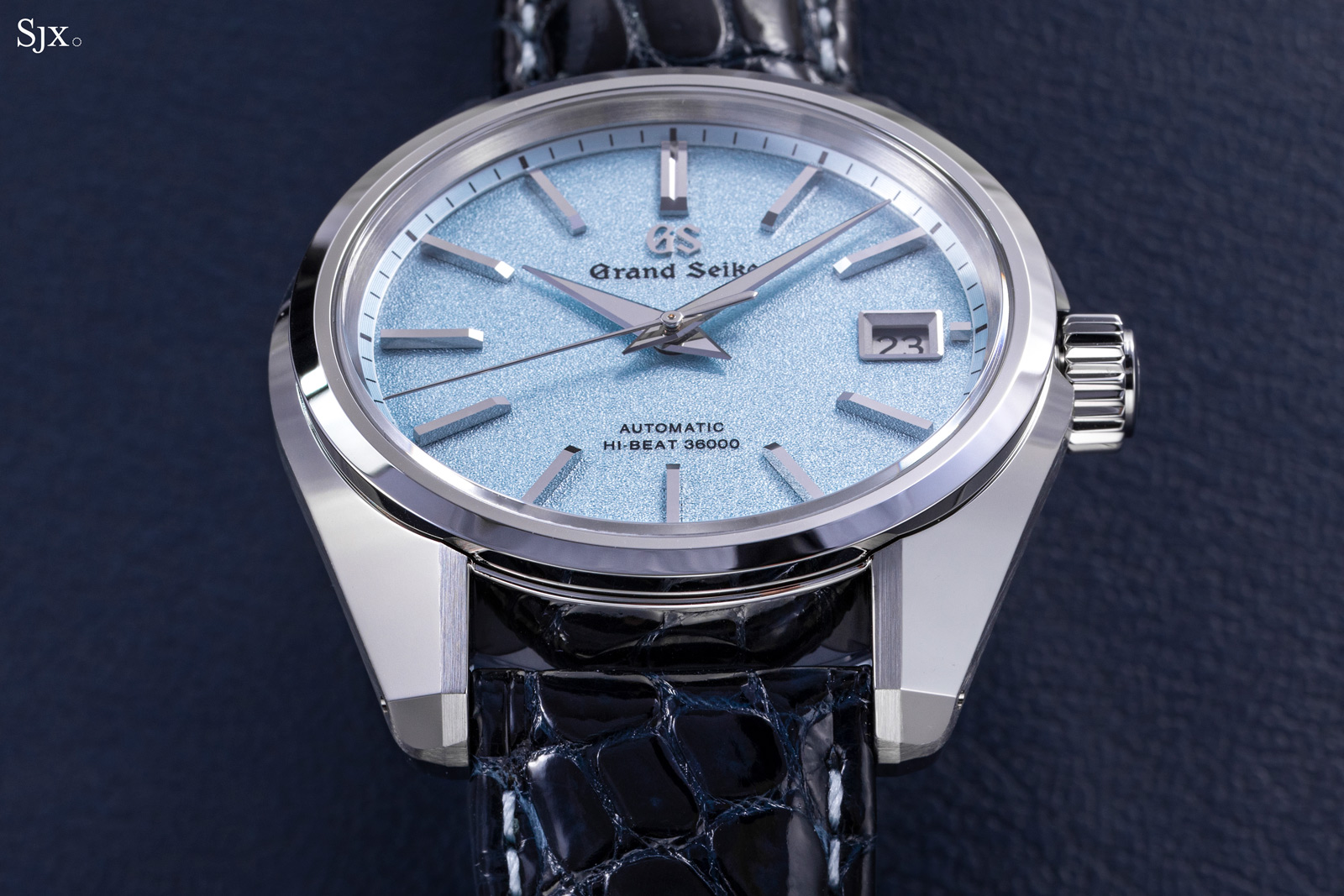 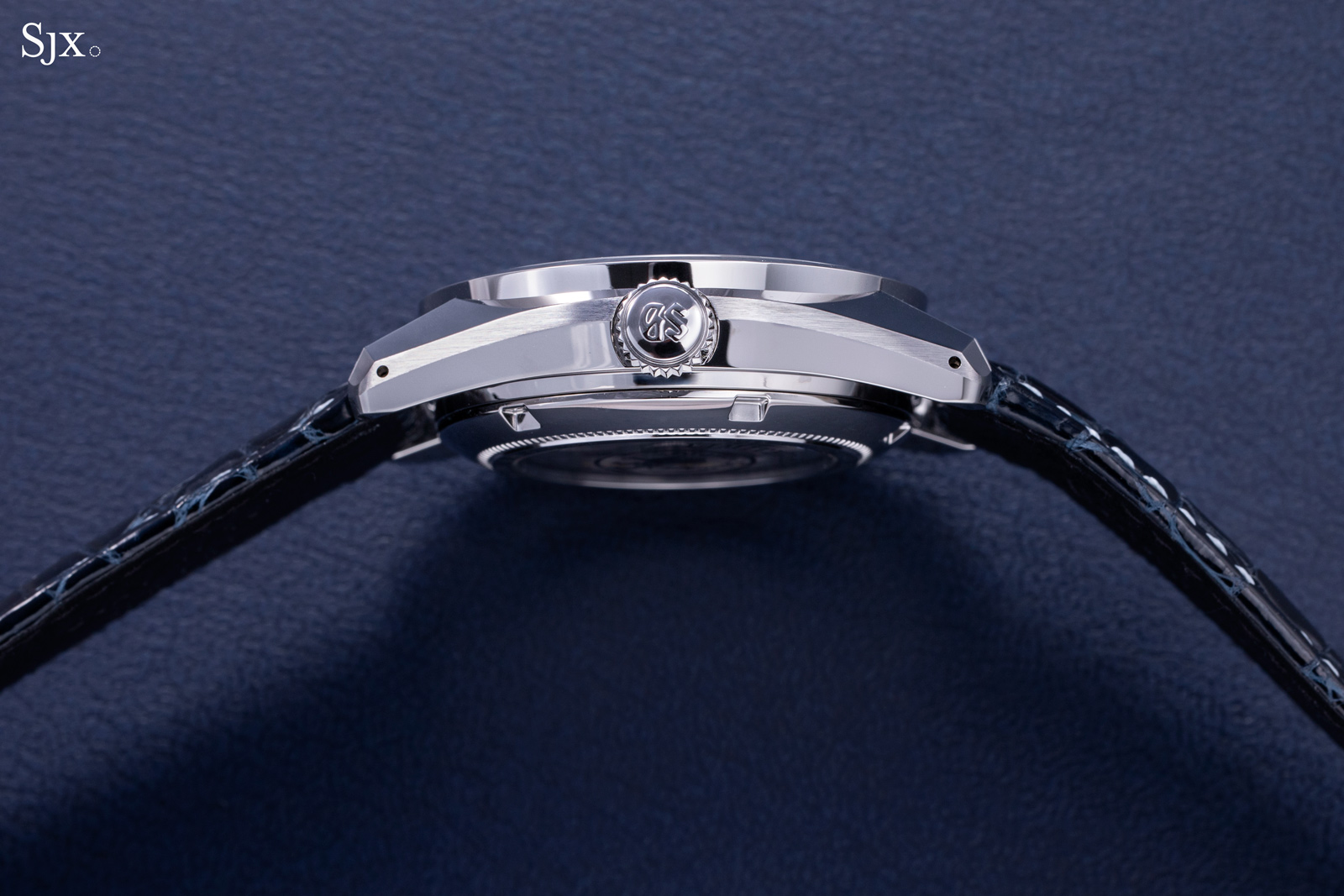 Returning to the almost-formal style of the dial, putting the SBGH287 on a strap, instead of the bracelet that’s the norm for the “44GS”, is a good choice. It gives the watch a more restrained appearance that’s slightly more formal.

At the same time, the five-link bracelet that goes with the model is dated in design, and would detract from the style of the dial. 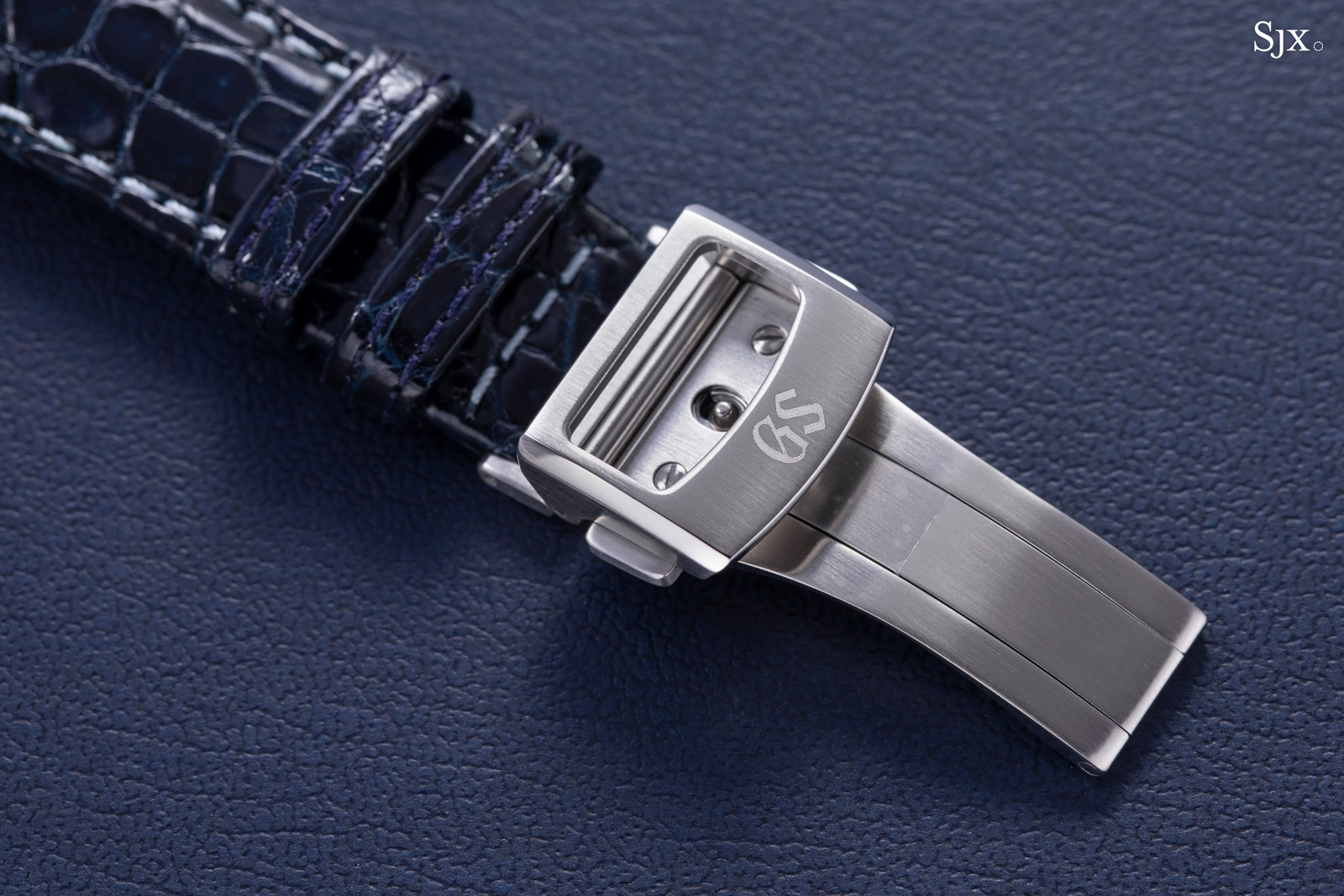 A fairly substantial folding buckle serves as a counterweight for the watch, though it is most comfortable with a strap of a specific length to fit each wrist

Inside the SBGH287 is a Hi-Beat calibre, which means the balance is high frequency, oscillating at 36,000 beats per hour, or 5 Hz.

It is, however, not the latest cal. 9SA5 with Grand Seiko’s proprietary escapement, which explains why it’s relative affordable. Instead the SBGH287 is powered by the tried-and true cal. 9S85 that debuted a little over a decade ago. 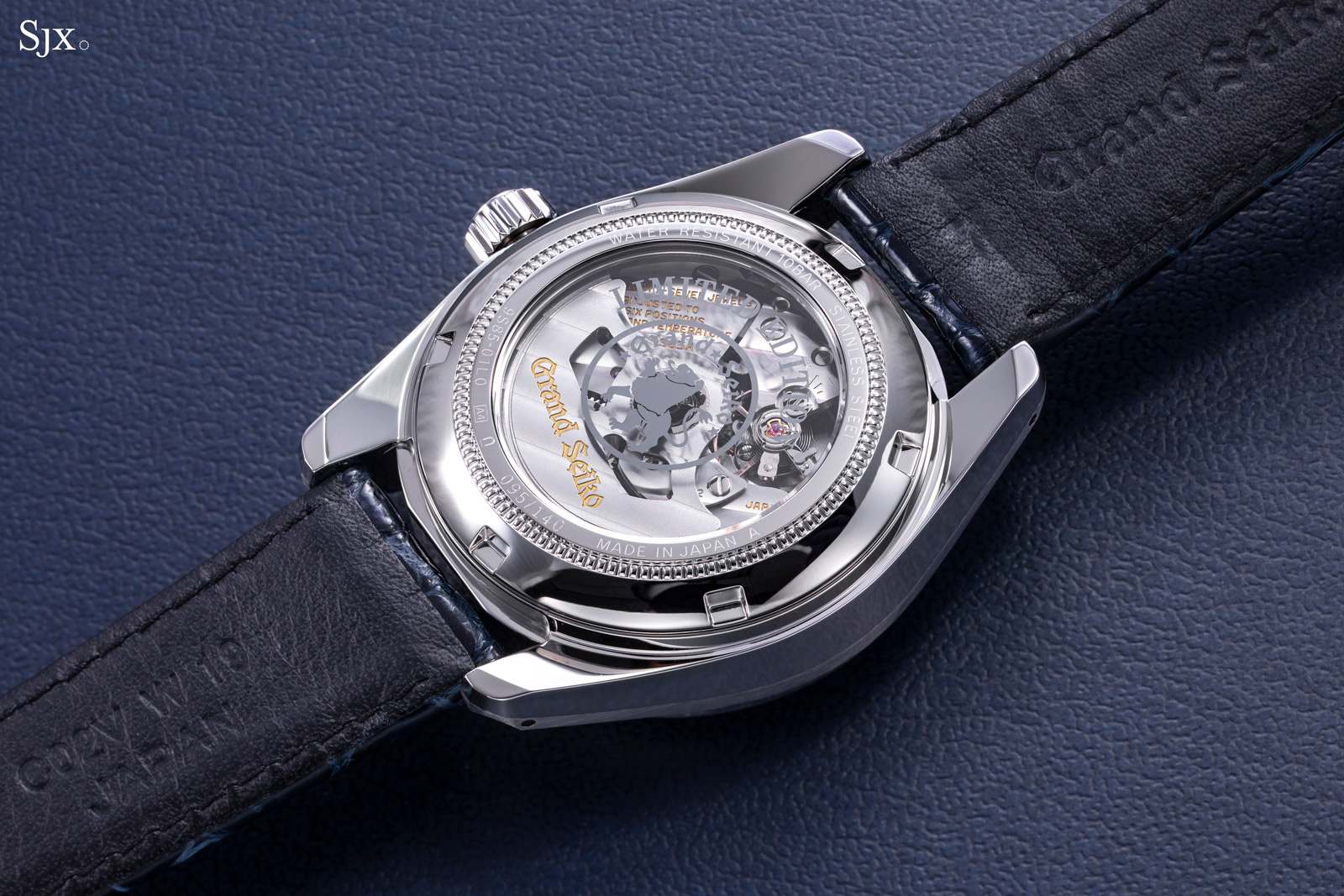 Though the cal. 9S85 does without the defining features of the new cal. 9SA5, namely the patented Dual Impulse Escapement and free-sprung balance, the old warhorse still does well where it matters.

It is robust – as evidenced by its thickness – and incorporates the brand’s advanced manufacturing technology. One example is the microelectromechanical (MEMS) escapement, made up of a skeletonised pallet fork and escape wheel that boast optimise geometry and lightness. 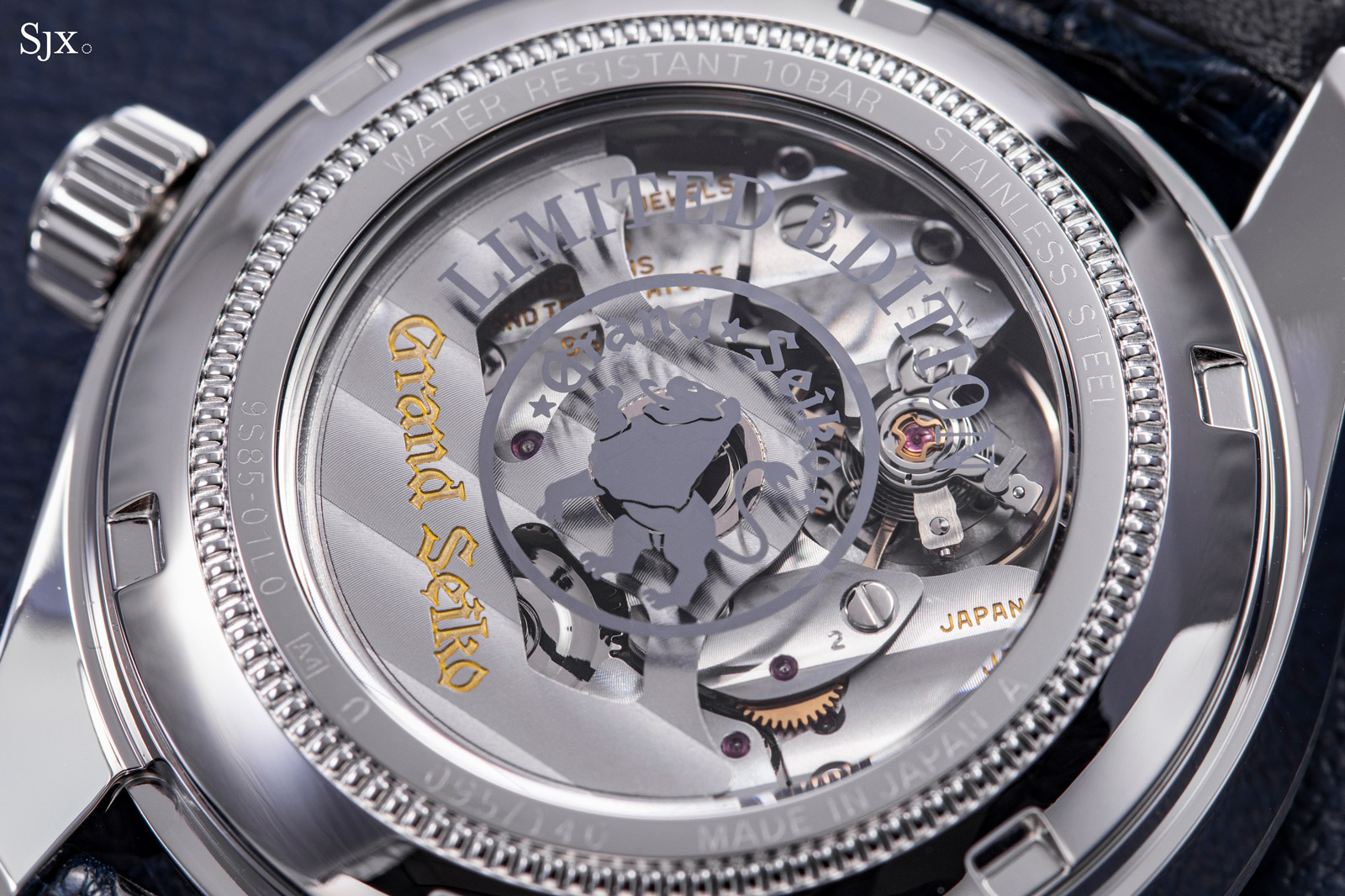 And the other is the hairspring, which is made of Spron 610, an in-house alloy that’s found only in Hi-Beat movement. According to Grand Seiko, Spron 610 is doubly as shock resistant and three times more resistant to magnetism as compared to the standard alloy it uses for hairsprings.

Most importantly, the testing benchmarks are telling: the cal. 9S85 is regulated to the same standard as the newer and more expensive cal. 9SA5, namely to within +5 to -3 seconds per day. And of course the new models with the cal. 9SA5 cost about 50% more than the SBGH287. Even though the balance has a regulator, the hairspring stud holder is proprietary and avoid the unappealing look of the low-cost Etachron regulator found on most Swiss movements in this price range

As with the earlier regional editions, the SBGH287 is a thoughtful design. It’s based on an existing model that isn’t exactly a best seller, which makes it all the more unusual. And the result is surprisingly appealing, so credit goes to both its creators for creating something interesting from existing ingredients.

The SBGH287 is a good watch in intrinsic terms – the aesthetics are appealing and the quality lives up to the price – which allows it to stand on its own as a compelling proposition.

Correction November 27, 2021: The vintage 44GS did not have a date, instead it was the 61GS that had the same case containing a movement with a date function.