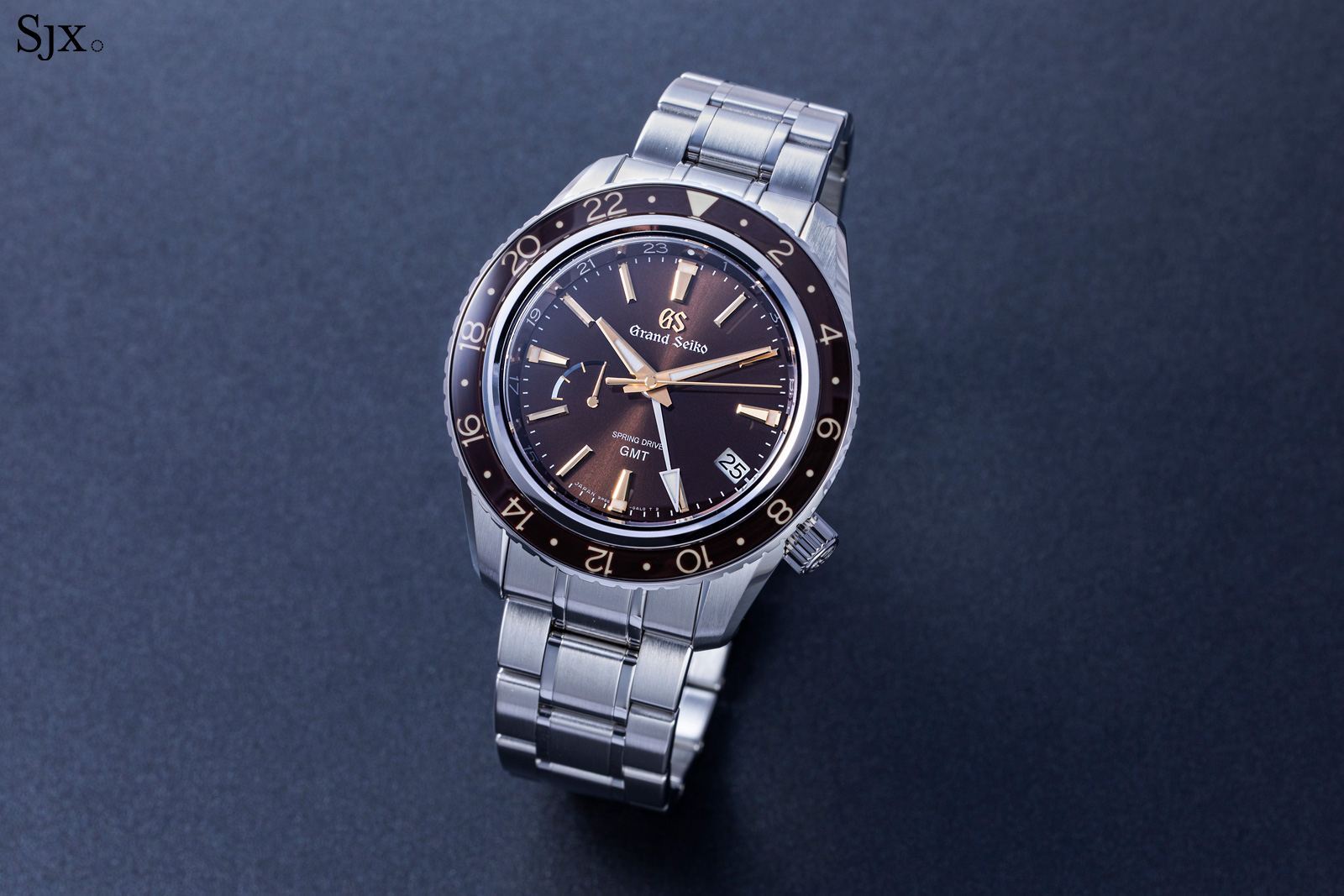 Dressed in richer colours than the black or blue of the typical Grand Seiko sports watch, the SBGE267G has a dial rendered in metallic brown that’s matched with yellow gold-plated hands and indices. Executed in steel, the SBGE267G is powered by the 9R66 Spring Drive movement that has a second time zone function. And it’s an edition of 140 pieces meant for five countries, making it a fairly small run relative to other recent Grand Seiko limited editions. Over the last couple of years, Grand Seiko has rolled out a variety of limited editions in a diversity of dial colours, but the SBGE267G still manages to be be different. Its look is distinctly more luxe than the standard Spring Drive GMT – the chestnut brown employed for the dial is unusual for Grand Seiko and striking, particularly combined with the gilt hands and markers. 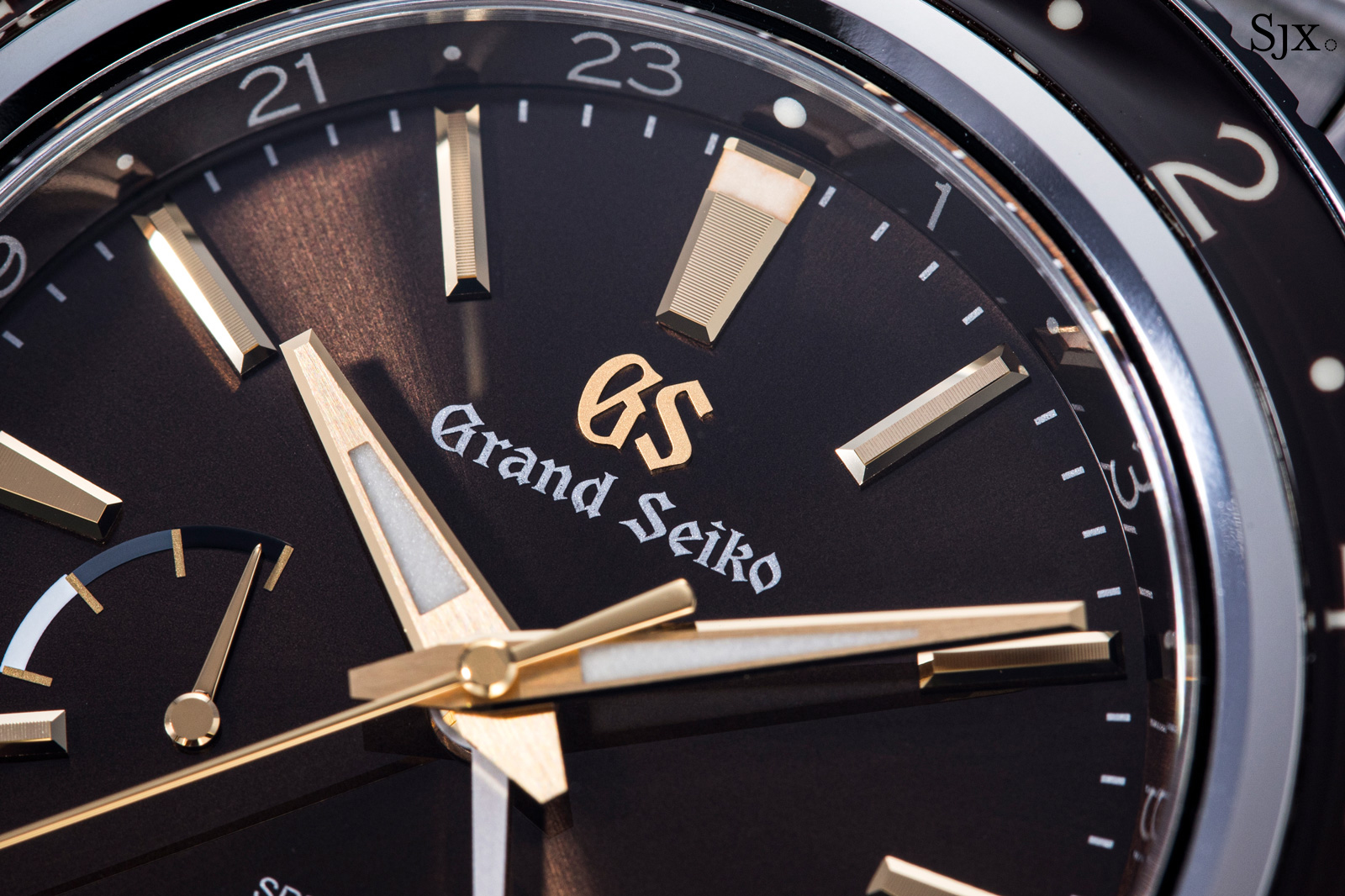 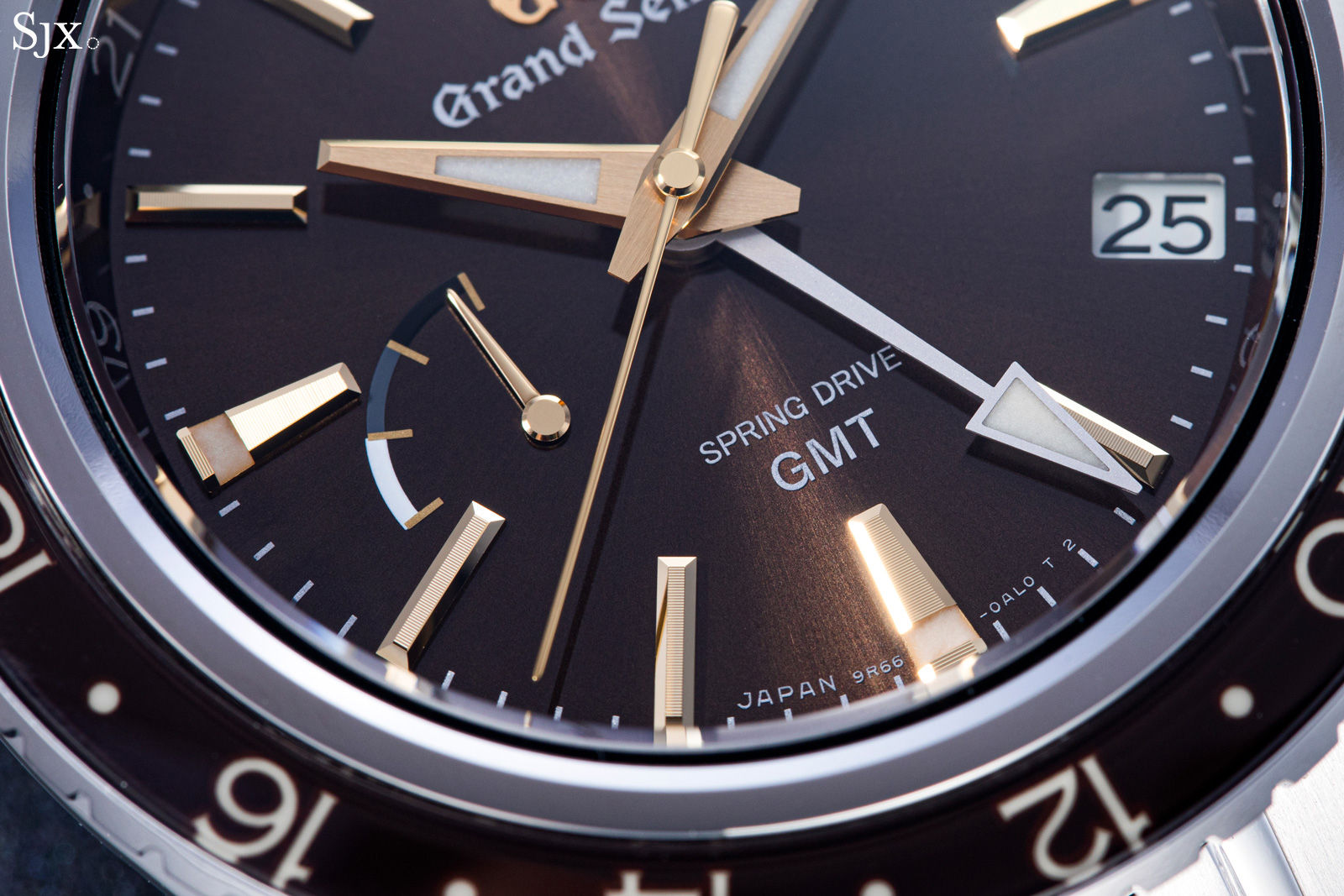 In the usual Grand Seiko fashion, the quality of the watch is excellent, with the dial and hands being especially outstanding for a watch of this price. Fabricated with a diamond-tipped tool, the hour markers and hands all have razor-sharp edges and near-mirrored surfaces. 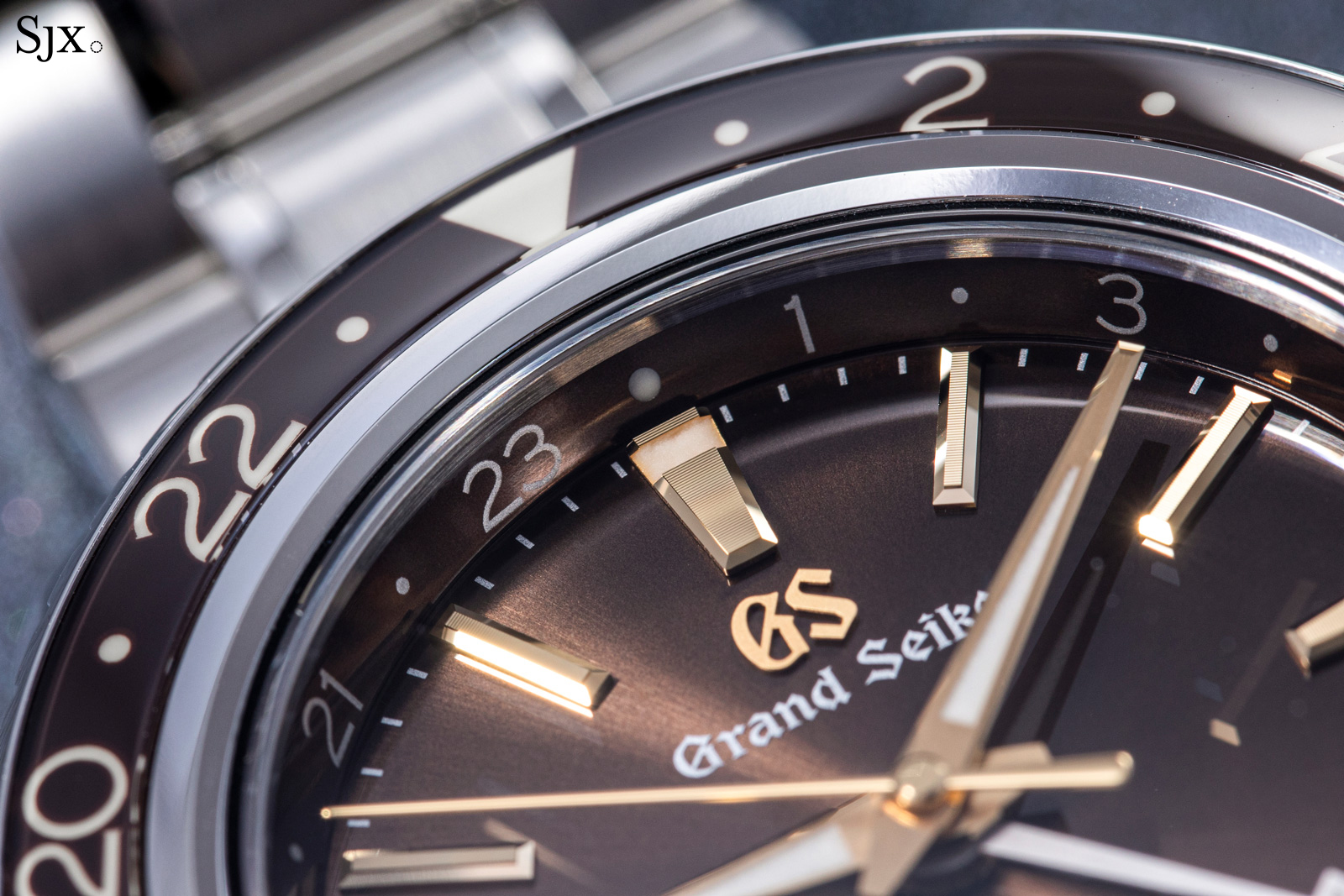 Because it’s a variation of the standard Spring Drive GMT, it wears the same. Large for a Grand Seiko at 44 mm in diameter, the case is also thick at 14.7 mm, a good part of it due to the bezel. This gives it a chunky feel that works well for a sports watch.

That said, the bracelet would pair better with the case if it was wider and slightly thicker. At the same time, the bracelet also lacks the fine-adjustment feature that later generations of Grand Seiko sports-watch bracelets feature. 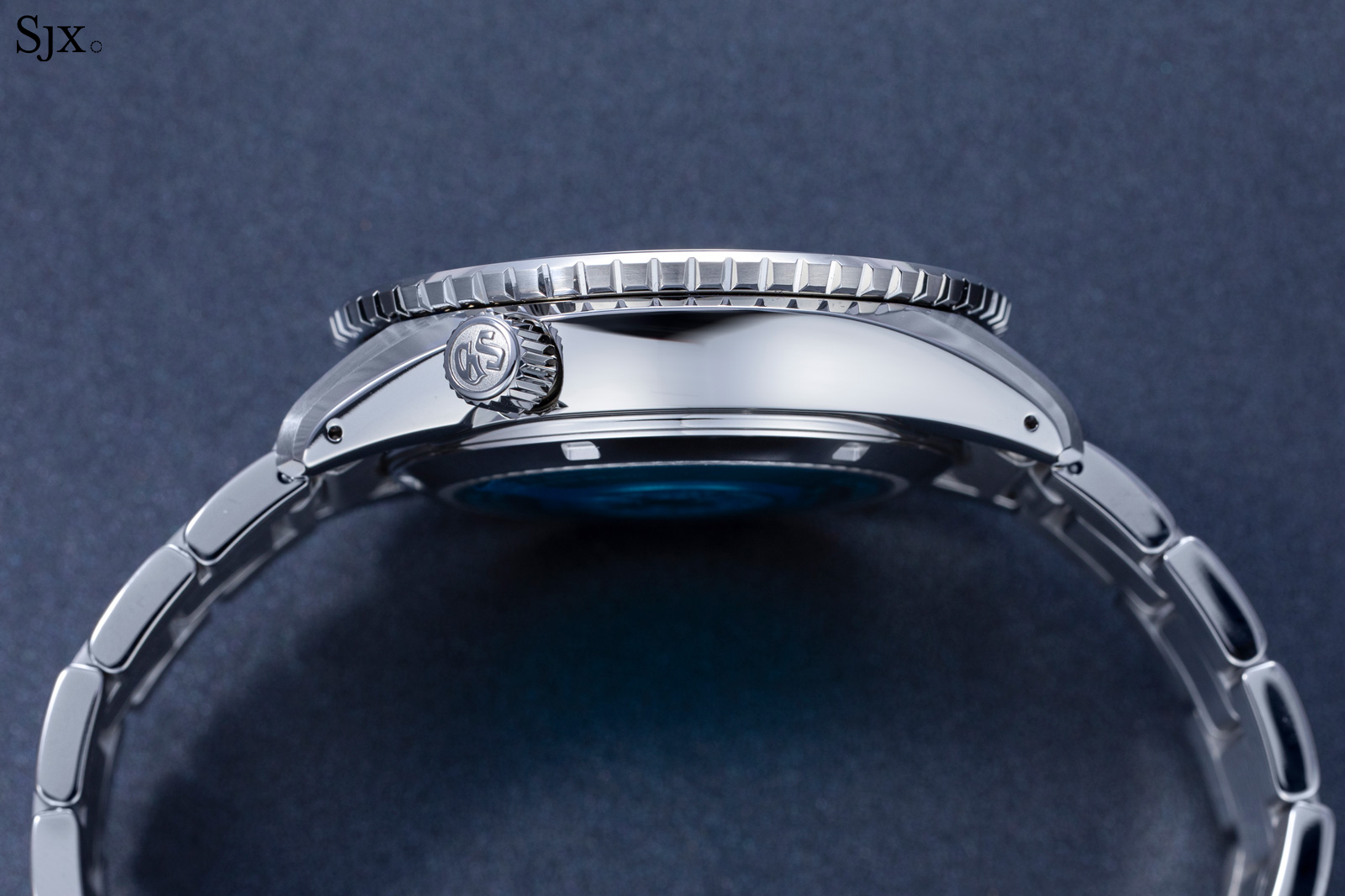 The case sides are sloped outwards towards the bezel, such that its diameter is larger than the footprint of the case back 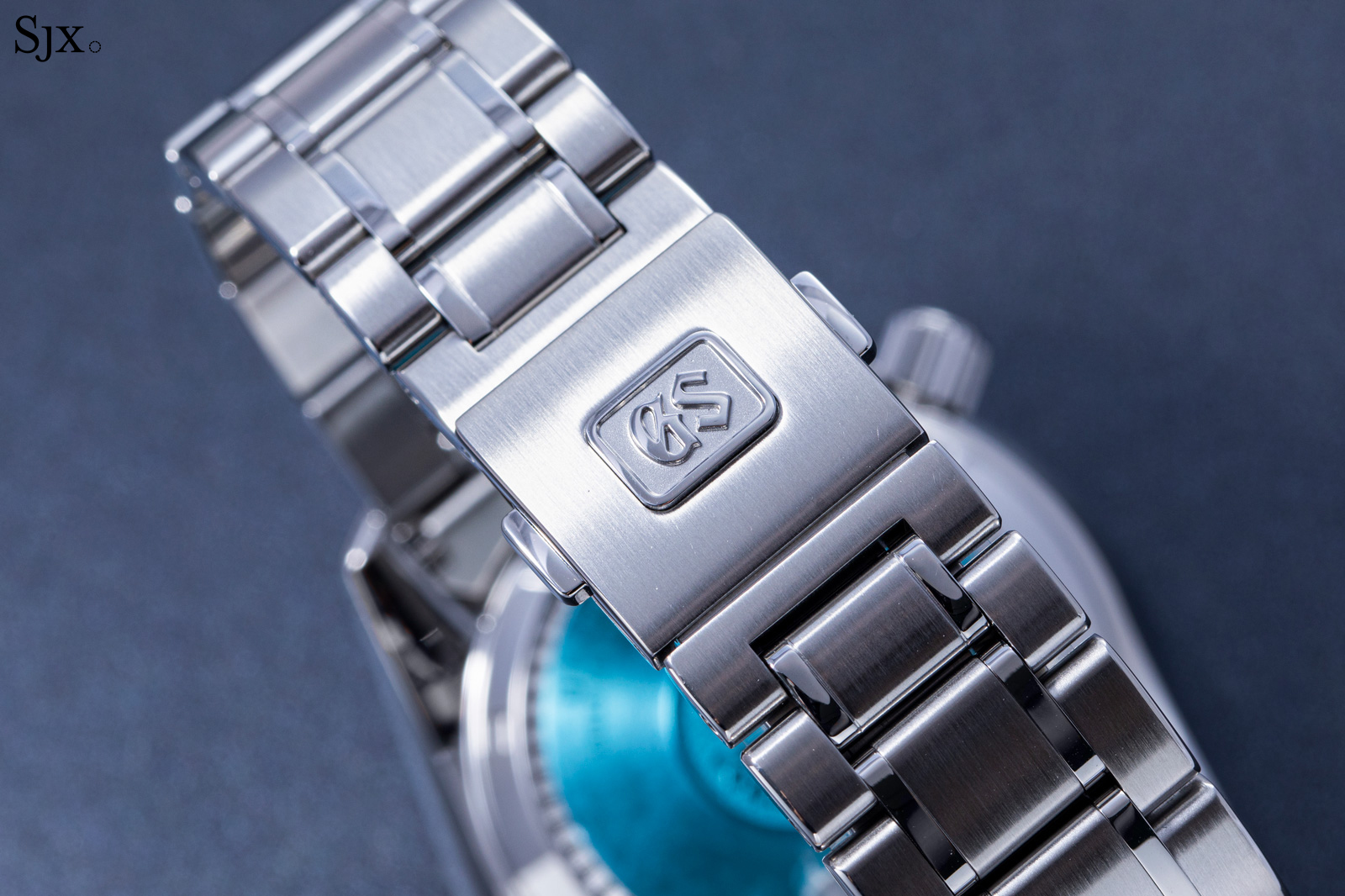 While newer Grand Seiko sports watches do have superior bracelets, they also cost more. For the quality of fit and finish, the SBGE267G is priced competitively at 8,828 Singapore dollars, which is about US$6,200, in part because it is equipped with an earlier-generation Spring Drive movement.

In contrast, the first watch with the new-generation Spring Drive 9RA5 movement, the Grand Seiko 60th Anniversary dive ref. SLGA001, retails for over US$11,000. The new movement is no doubt superior in construction, function, and finishing, but it does cost substantially more while also putting it in a more competitive price segment.

Rendered in a nuanced shade of reddish brown, the dial is finished with a radial brushing that allows it to catch the light, revealing the colour. It’s a richly-coloured livery that is not usually found on Grand Seiko sports watches.

Complementing the dial colour perfectly, the yellow gold-plated hands and markers are an ideal pairing. The GMT hand, however, is in a frosted silver that is usefully functional but doesn’t match the rich colours of the dial. The same can be said for the text on the dial that’s done in white; gilt print would have enhanced the palette. 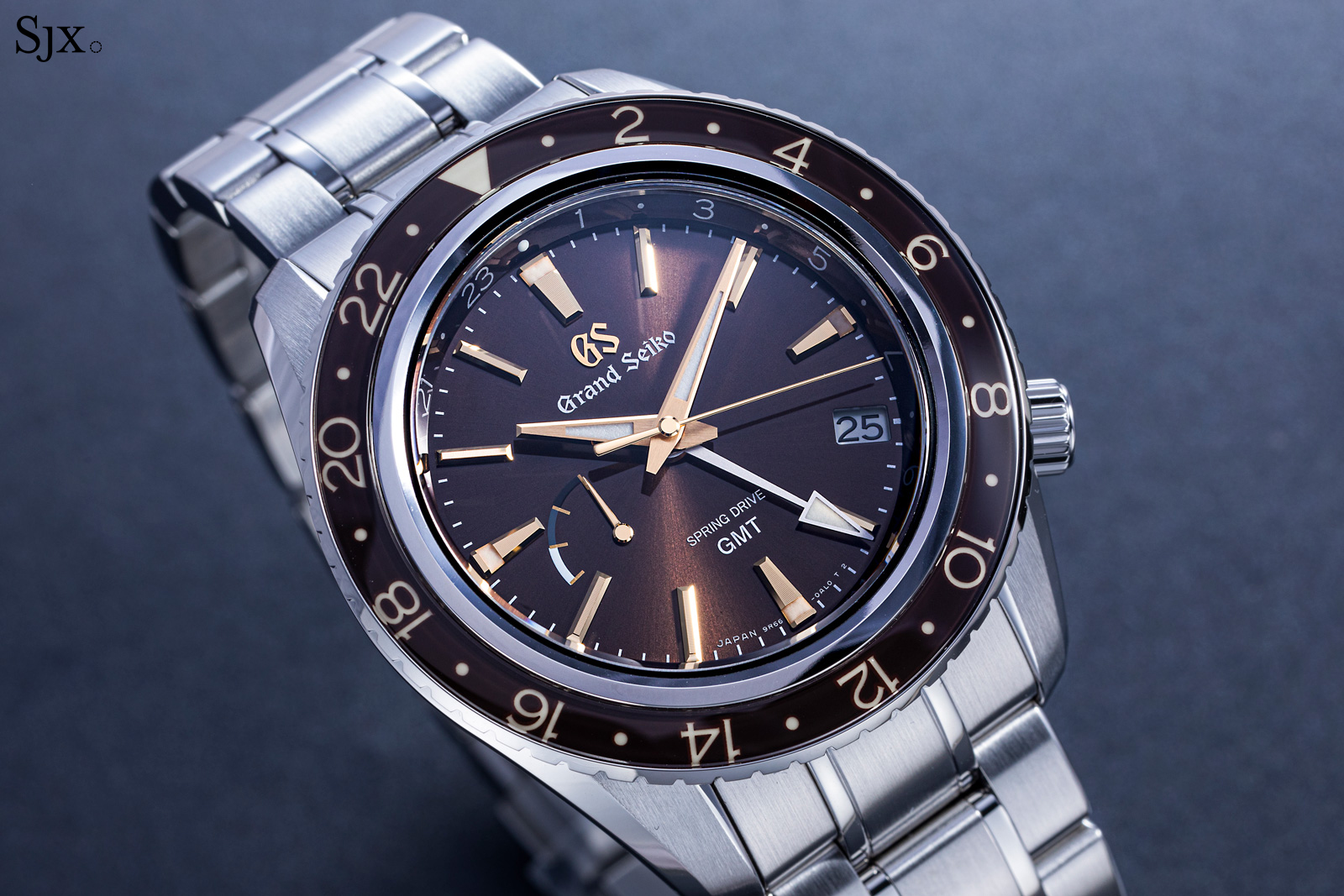 All of the hands are impeccably finished

A key feature of the Spring Drive GMT is the sapphire-covered bezel. It’s essentially a slightly domed ring made of clear sapphire that sits over the bezel that has a luminous 24-hour scale. This leaves the bezel scratch-resistant – the hardness of sapphire is second only to diamond – while also giving it a glossy surface that evokes the Bakelite bezels of GMT watches of the 1950s. Up close, the dial is practically flawless – a given for Grand Seiko watches. The most obvious aspect of its quality are the hands are markers. Sharply facetted thanks to the “diamond cut” production technique – fabricated with a milling tool that has a diamond-coated tip – they glint in the light.

Both the hands and markers are actually two tone in finish. All of them have mirror-polished flanks, but the hour markers have a fine, linear pattern on their tops, which is essentially the pattern left by the milling machine that makes them. And the hands are linearly brushed on the top; a brushed finish is practical likely due to the large size of the hands.

And even the smallest details, from the form of the power reserve hand, to the cut-out for the date, are all executed seamlessly. 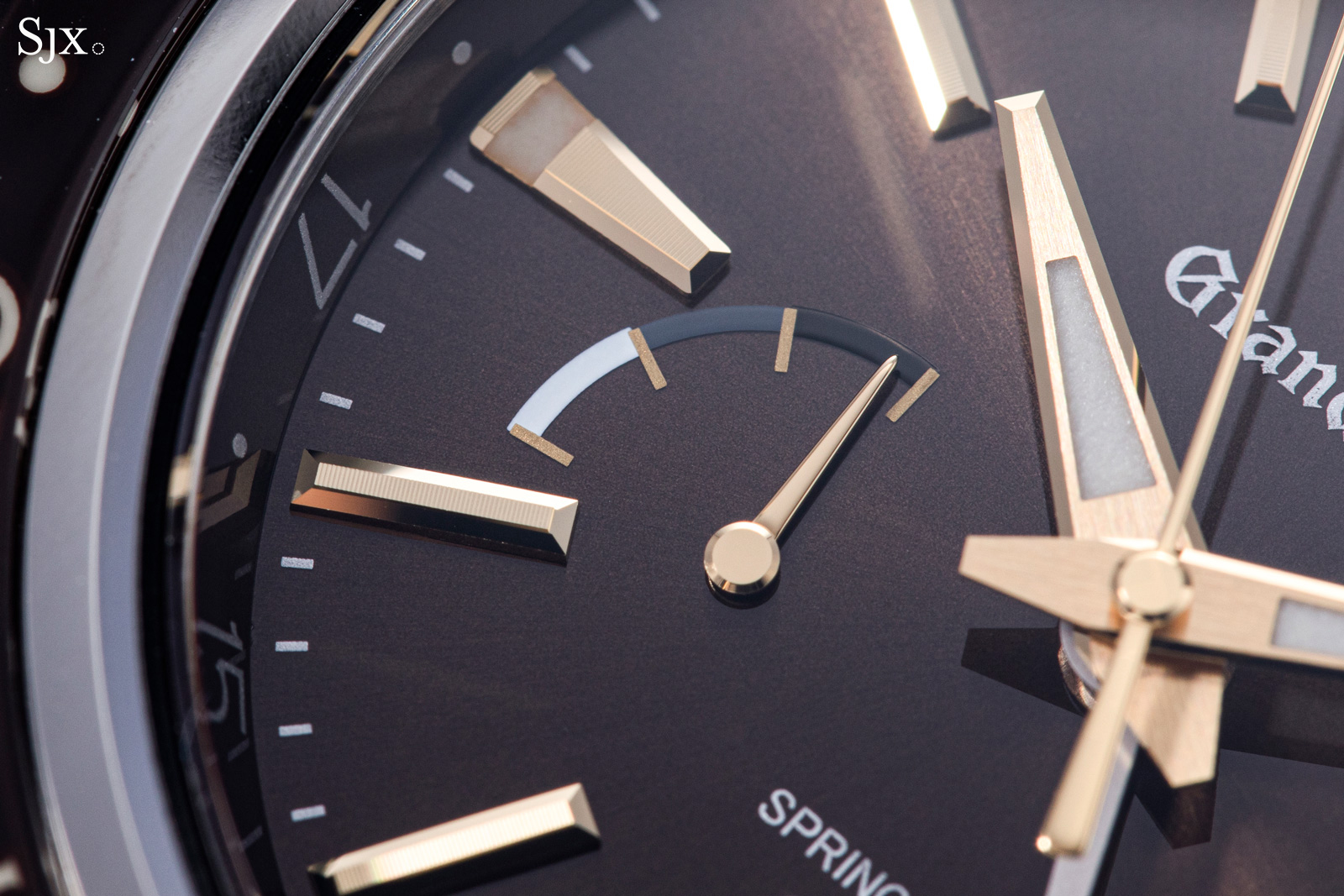 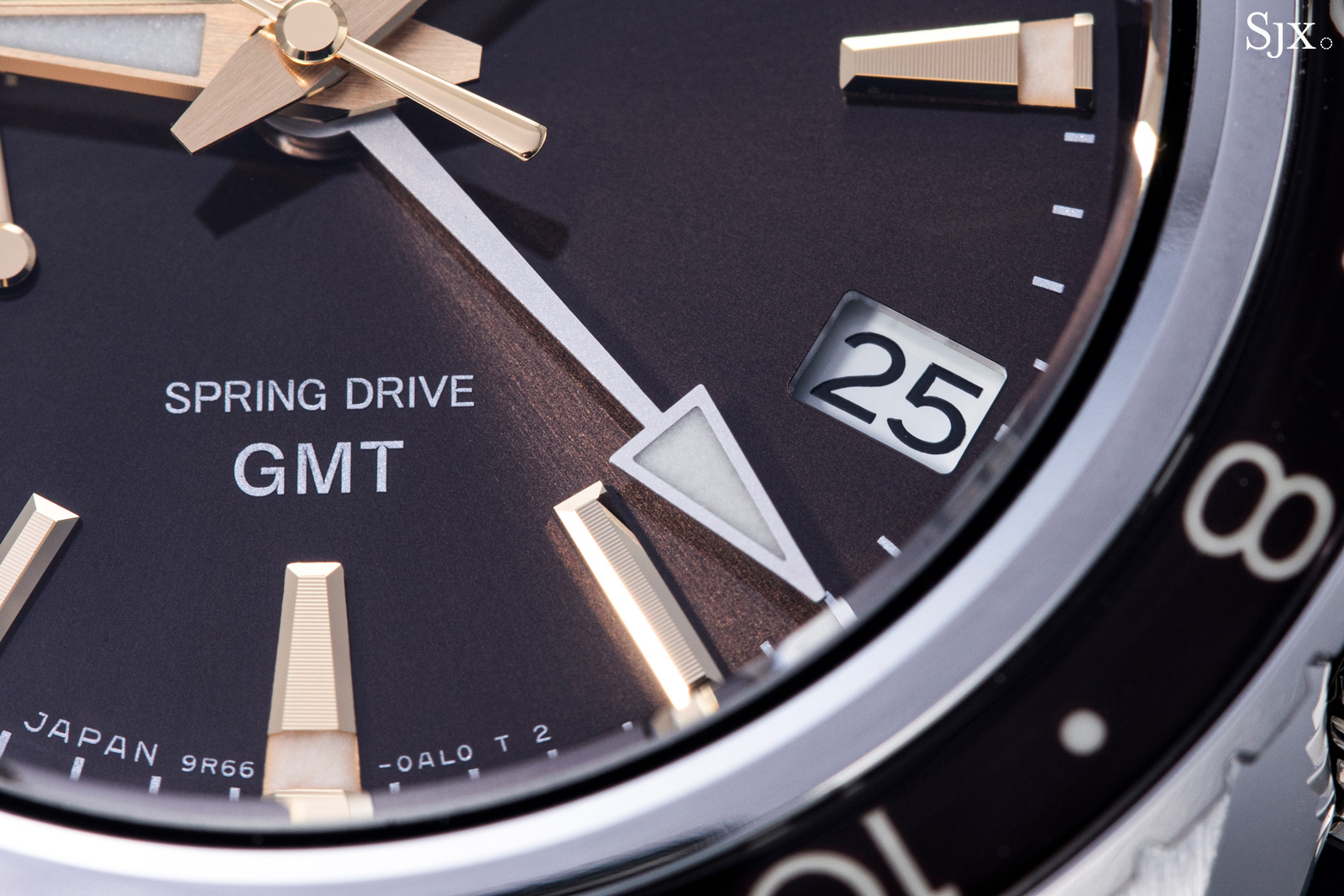 The GMT hand against the precisely-cut date window

The case and bracelet are both steel, and finished in the Grand Seiko manner, which is to say very good. As with all Grand Seiko watches, the case is first finished with the Zaratsu flat polishing technique that relies on a proprietary machine to give the surface and extremely flat, mirrored finish. The result is a wonderfully clean and neat finish on the case and bracelet, with perfectly defined borders between the polished and brushed surfaces. Beyond the obvious, some of the finer details are the polished ring in between the sapphire bezel and crystal, as well as the polished top of the bezel with brushed flanks for its notches. 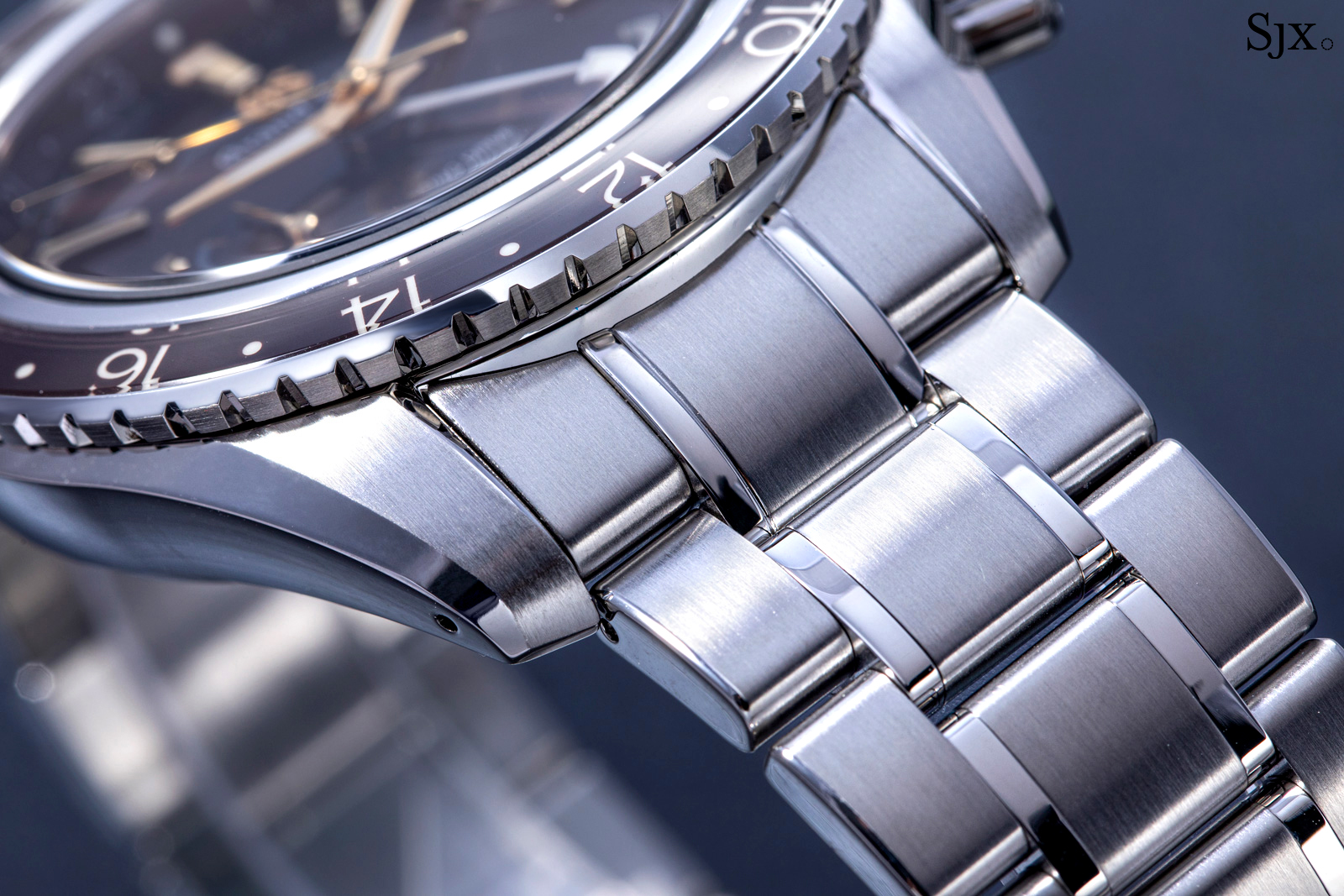 Underneath the solid case back is the 9R66 Spring Drive movement. A hybrid movement that combines a mechanical mainspring and going train with an electronically-controlled flywheel oscillator, Spring Drive keeps time to within a second a day at its worst – and is often spot on – making it several times more accurate than a conventional mechanical movement.

While the electronic component of the movement might make traditionalists wary, Spring Drive makes sense in a sports watch that might be subject to the very things that throw off the timekeeping of a mechanical movement, namely shocks and substantial temperature variation.

Introduced in 2006, the 9R66 movement is one of Grand Seiko’s first-generation Spring Drive movements, yet it can still go toe to toe with newer movements in terms of functionality, reflecting the technical advancements in its construction. It has a 72-hour, or three-day, power reserve, along with the GMT hand. Because it was constructed from the ground up as a second time zone movement, as opposed to being an add-on mechanism, the local-time hour hand is independently adjustable in one hour steps – and the date moves in sync backwards and forwards – making changing time zones when travelling a breeze. The case back is solid and decorated with the Grand Seiko lion emblem in relief, which was one standard for Grand Seiko watches, though display backs are gradually becoming the norm

While the construction and finish is very much the usual Grand Seiko quality, SBGE267G sets itself apart from the brand’s numerous limited editions because of its striking colour.

More importantly, the SBGE267G costs almost the same as the standard version the Spring Drive GMT in steel, the SBGE201. If you like the colour, the SBGE267G pretty much a no-brainer given the parity in price with the standard model and comparatively small, 140-piece run. And the SBGE267G is also accompanied by a Grand Seiko novelty: a set of beer glasses emblazoned with the lion emblem that changes colour according to the temperature of the beverage within.

This was brought to you in collaboration with Grand Seiko Singapore.