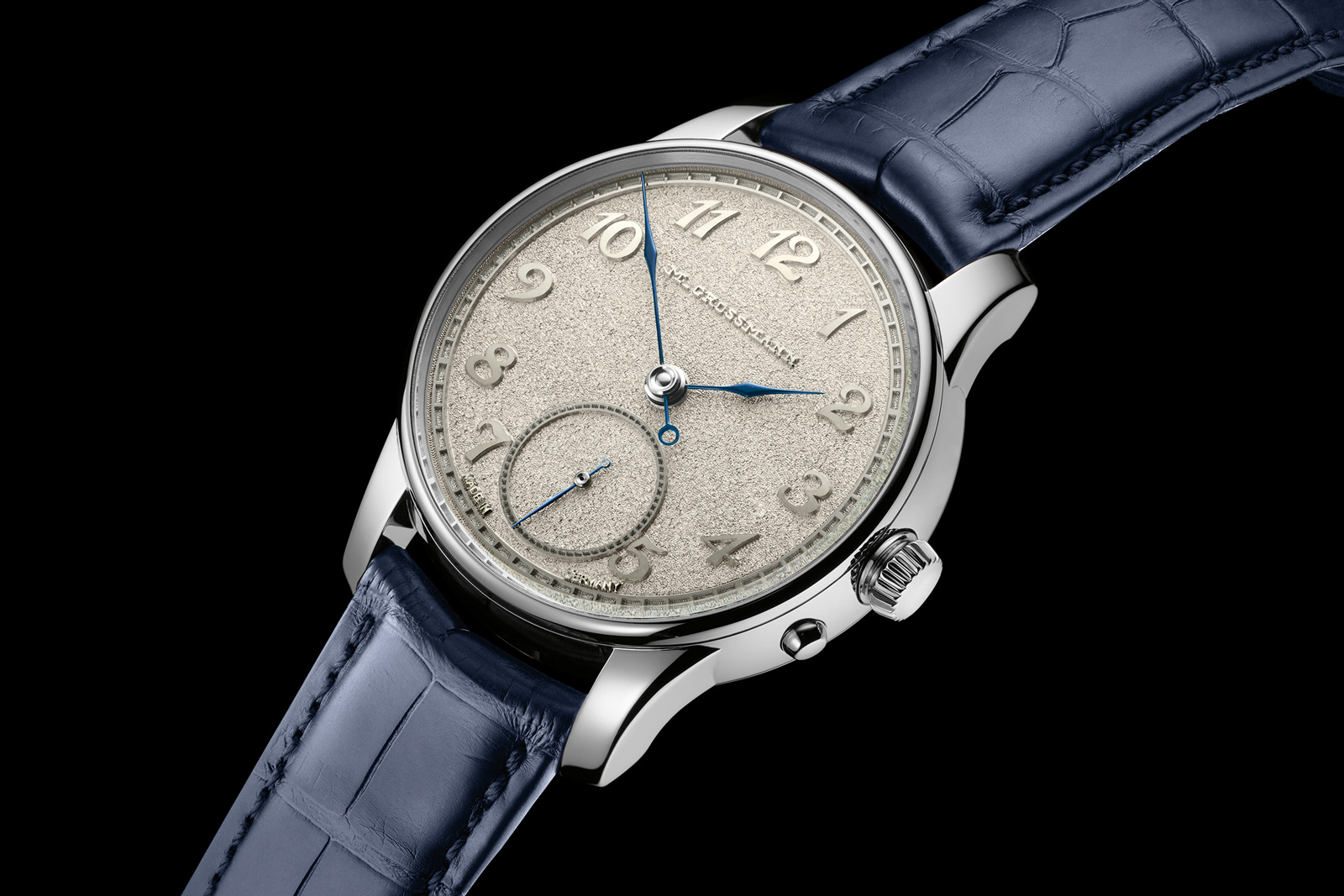 Highly regarded for the high quality finish found on its movements, Moritz Grossmann now applies artisanal decoration to the dial. Based on the Benu model, the Tremblage features a dial that’s been hand engraved to create a granular texture, while having its numerals and scales raised in relief. And the hands are of course steel that’s been heated to turn them a brown-violet hue that is the brand’s trademark. 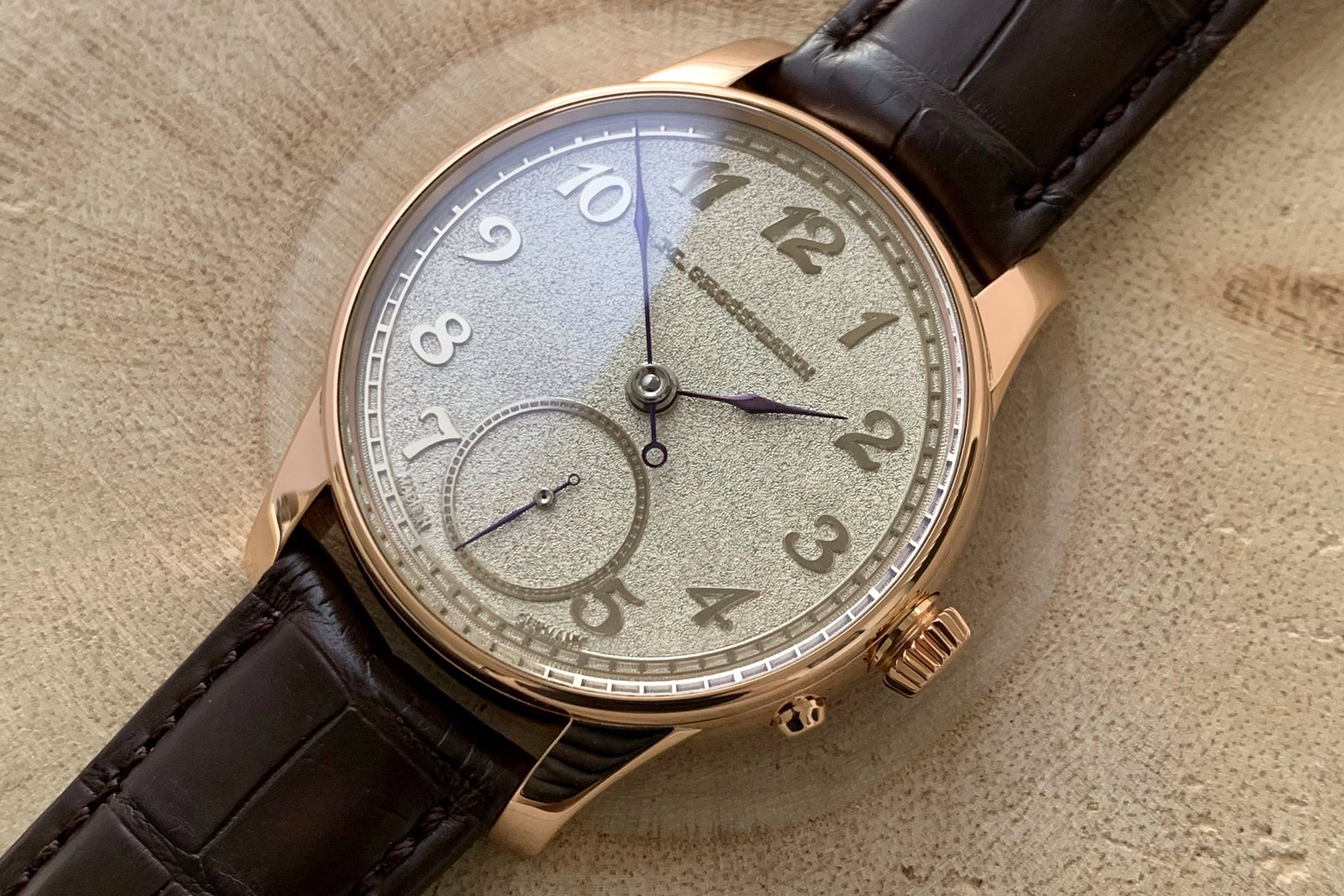 Grossmann watches come in a variety of styles, with varying levels of attractiveness. Fortunately the Tremblage falls into the appealing category. The largely classical styling and finish suits the brand well. And the tremblage finish sets the watch apart from other Grossmann watches.

In terms of the quality, the dial decoration passes the test, at least in photos. That’s not surprising since Grossmann quality is generally excellent. Similarly, the movement looks to be finely finished, though not as elaborately as some of the brand’s other calibres. That’s most obvious in the fine frosting on the bridges, instead of striping. 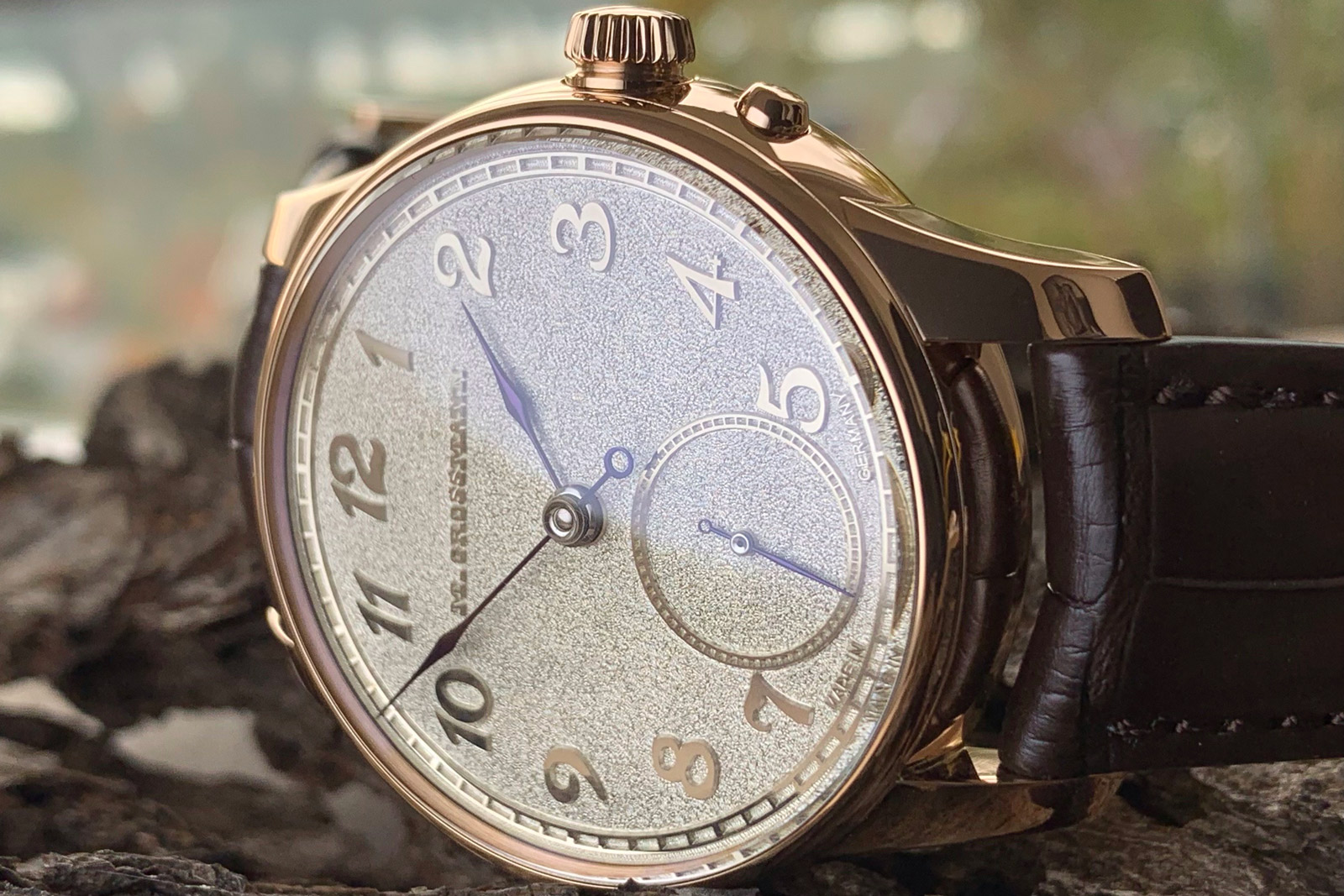 While tremblage is not unique to Moritz Grossmann, it is most frequently associated with A. Lange & Söhne, which deserves credit for making it a known term amongst watch enthusiasts. Lange frequently applied the technique to the limited editions of its acclaimed Handwerkskunst series.

Given that Grossmann is a smaller player in the same town that Lange calls home, this new model does feel a little bit like Grossmann trying to leverage on Lange’s success. While it takes nothing away from the quality of the watch itself, this similarity reduces the originality and appeal of the watch.

That said, the Tremblage is good value as such things go. It’s available with a steel case for a bit over US$36,000, which is more affordable than most other watches with similar levels of decoration.

Tremblage comes from the French word tremblant, which means “trembling”. It’s a reference to the motion required to create the finish, which requires the engraver to move his burin back and forth in several directions over the same spot, before moving on the adjacent spot to do the same. That creates a texture made up of tiny dimples, giving the dial a “trembling” finish. 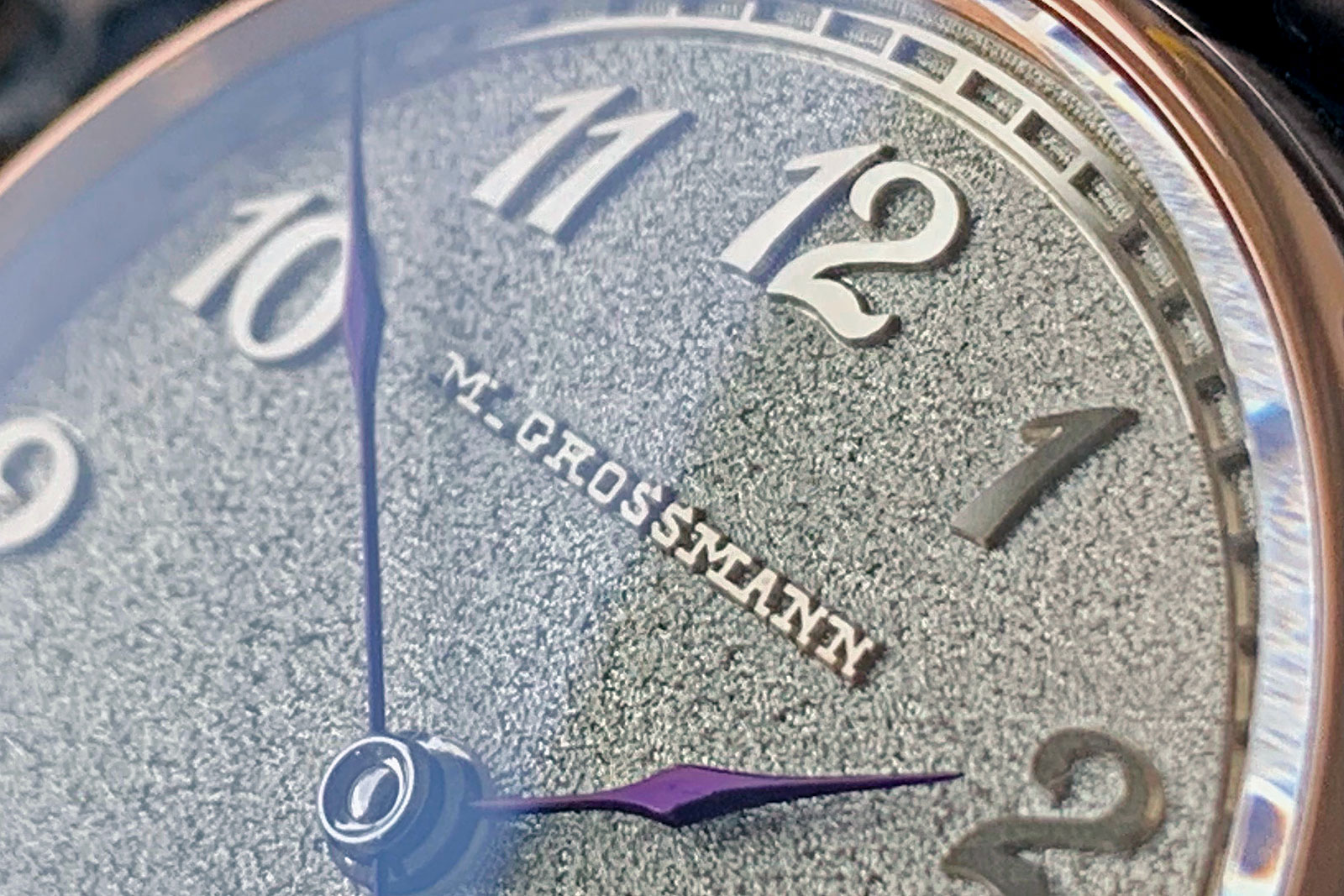 The dial is German silver that is first engraved by machine to create the sections in relief, which are the hour numerals, scales for the minutes and seconds, as well as the logo. These raised sections are then refined by hand before the tremblage finish is applied. 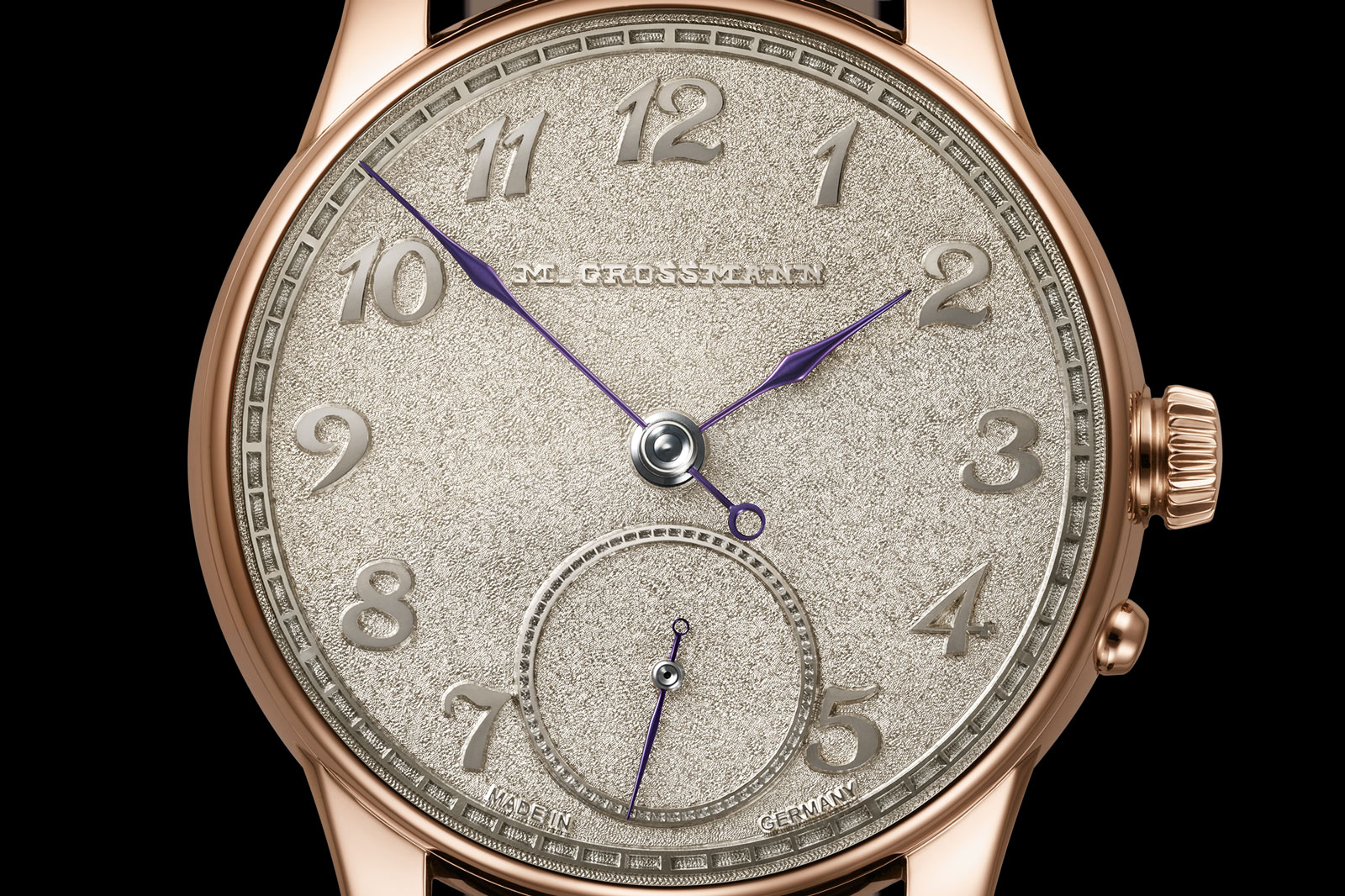 Also in German silver are the three-quarter and main plates of the movement. Heavily inspired by 19th century pocket watch movements, the cal. 100.1 is entirely traditional in its style and finish.

The three-quarter plate is hand engraved with text in flowery italic script, giving it a more lyrical appearance than the usual Grossmann movement. That said, the frosted surfaces of the plates are not as lustrous the striped finish found on other calibres. 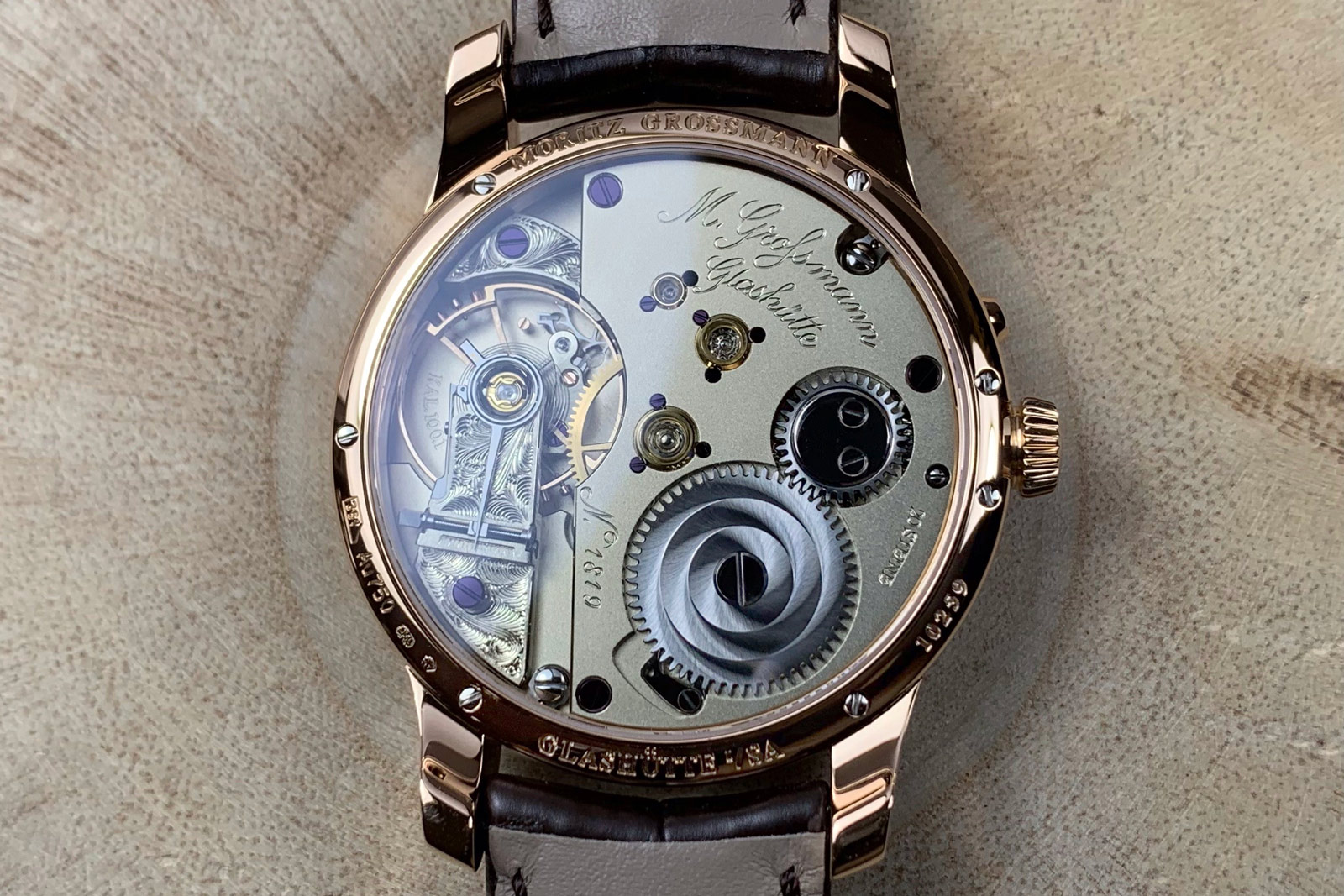 The hand-wound movement has a host of traditional features, including the lateral micrometer regulator index as well as hand-engraved balance and escape wheel cocks. But it also incorporates a novel mechanism invented by Grossmann: a seconds-release for more precise setting of the time.

Pulling the sprung crown stops all the hands on the watch, but only pressing the button at four o’clock restarts the balance wheel and releases the hands. That way the time can be more precisely synced with a time signal.

A twist on the artisanal dial.