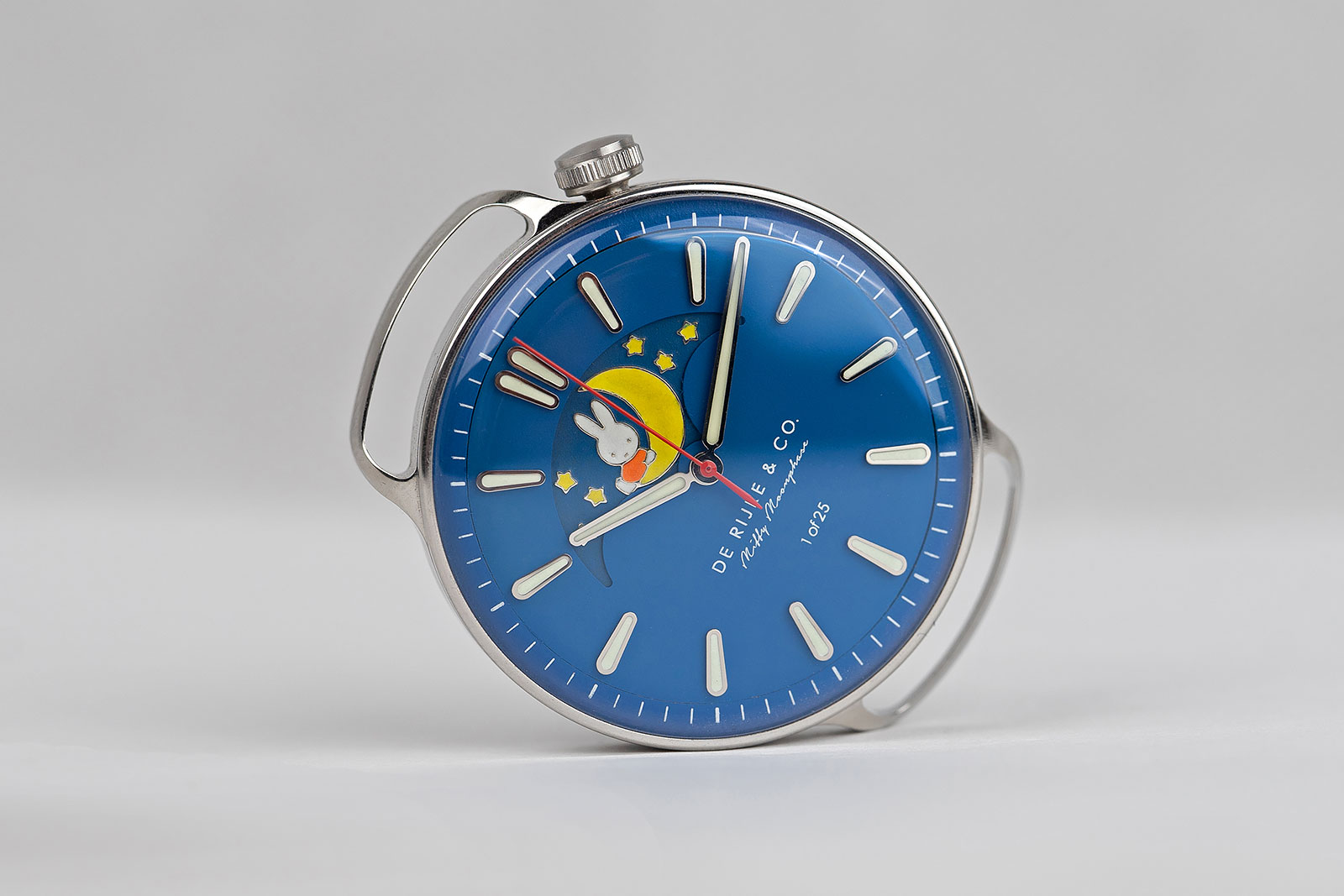 Having invented a unique driver’s watch with a swivelling case middle that changes the alignment of the dial, Dutch watchmaker Laurens De Rijke has elevated the novelty of his watch by giving it an oversized moon phase display that has a rabbit sitting on a crescent moon.

Based on the Amalfi wristwatch, the Miffy Moonphase depicts the fictional rabbit created by Dutch artist Dick Bruna. Europe’s equivalent of Hello Kitty, Miffy has sold over 85 million books and has been the subject of cartoons and also a feature-length film. 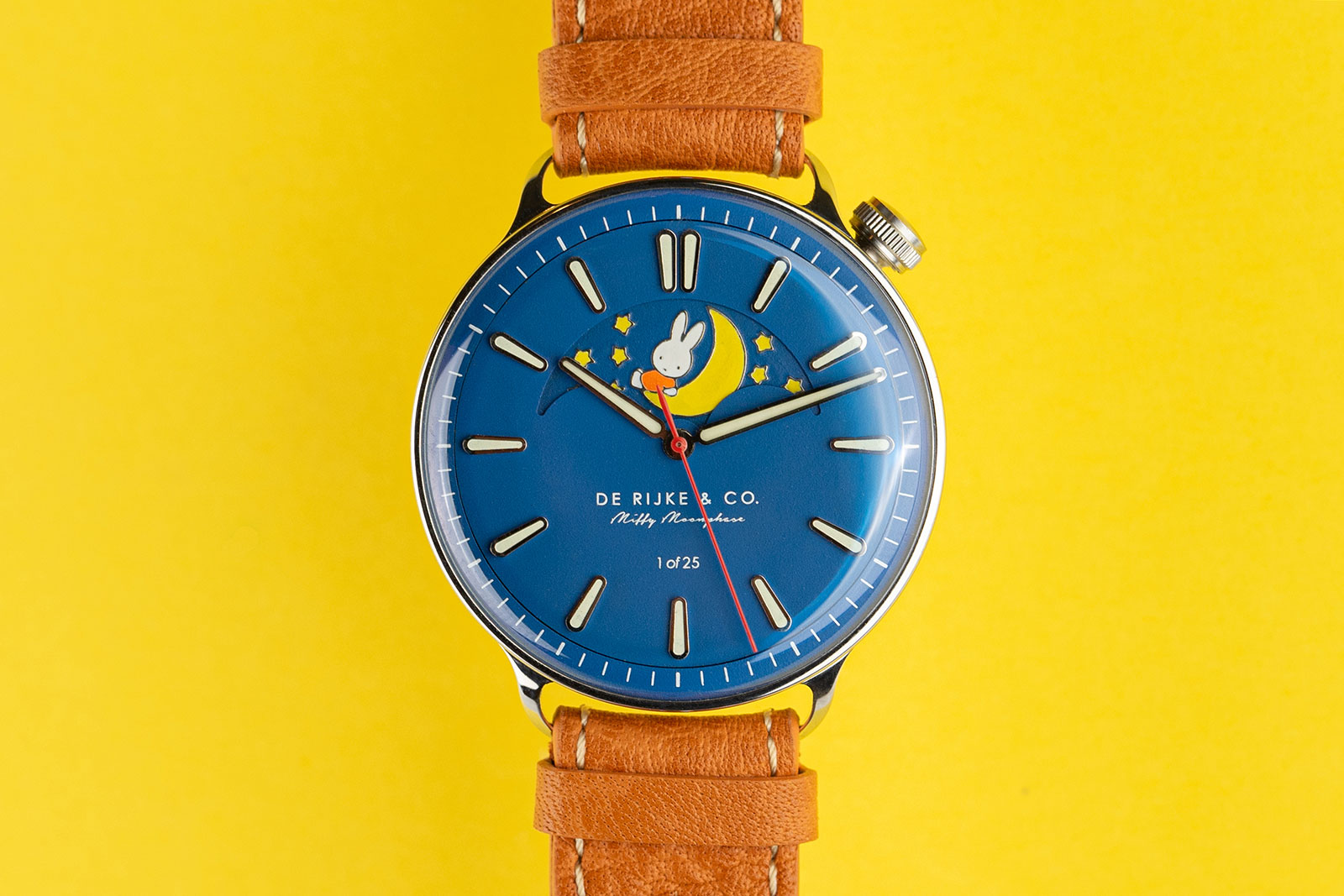 A collab between the Dutch watchmaker and the owners of Miffy, Mercis BV

In a world where watches perceived to be iconic and “investable” continually rise in price (resulting in sometimes diminishing price-to-quality ratio), the Miffy Moonphase is an affordable timepiece that’s original and interesting, both qualities that make a watch memorable and appealing.

The Miffy watch is notable for doing more than just adding a comic book character to the dial. In fact, it incorporates a surprising amount in a compact, affordable package. It’s based on De Rijke’s trademark driver’s watch, which has an inventive case mechanism that allows the wearer to adjust the angle of the dial up to 90 degrees from the vertical (more on that below), which is has been upgraded with a hand-painted moon phase disc. 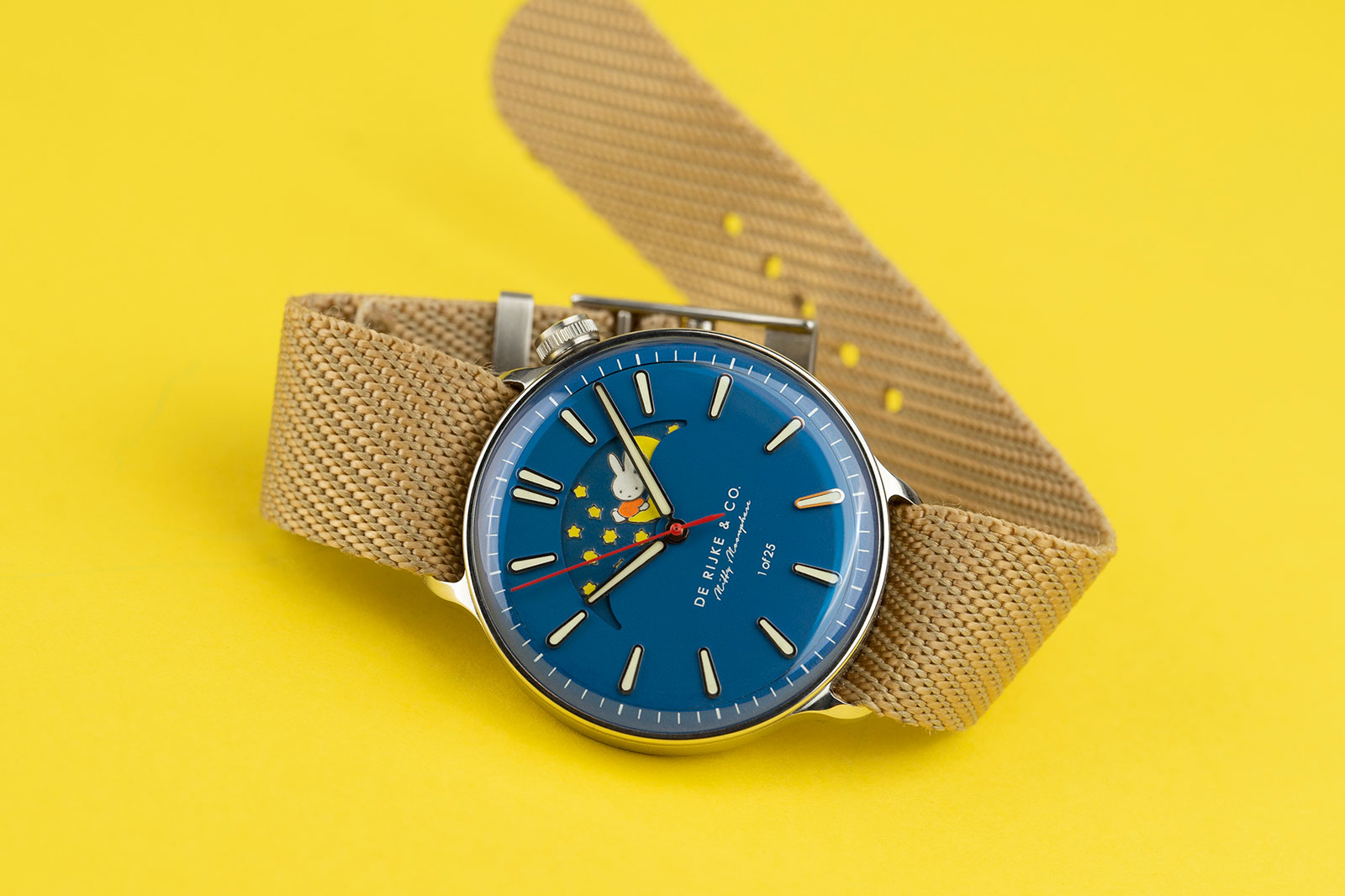 While the case mechanism is innovative, the functional dials found on the original Amalfi models lack punch, so much so you might not notice the clever case construction. But that problem has been solved with the simple astronomical complication livened up with cheerful colours and cartoon.

Despite the comic book aspect contrasting with an otherwise fuss-free dial, the result is harmonious and pleasing, perhaps even minimalist as far as such pop culture watches go. And the whimsy of Miffy matched with the mechanical appeal of the case – which is made by Mr De Rijke himself – makes for a thoughtful product. That in turn means the price tag of around US$3,000 is easily digestible, especially considering the limited edition is just 25 pieces. Stunning and functional even at night

Despite the compact 38 mm case, the Miffy Moonphase manages to combine both an ingenious case mechanism and a hand-made dial with a complication.

The case is a multi-piece construction that can be distilled to two key parts, an open ring that incorporates the lugs and an inner case middle that contains the dial and movement. The case middle sits within the open ring, with the two connected via a ratcheting system that allows the case middle to slide back and forth, with the crown moving along an opening on the right side of the ring. The dial is equally interesting in terms of its construction. It’s made up of three distinct components: a two-stepped ring that contains the applied hours markers, a central disc with an opening for the moon phase, and the moon phase disc itself.

The moon phase is a bit of artisanal decoration within the watch. It starts out as a brass blank that’s etched to create a three-dimensional surface showing the stars, moon, and fictional rabbit. It’s then plated in silver before being hand-painted with Super-Luminova with the background in the signature Dick Bruna blue. The lumed stars and Miffy are both finished by Swiss Super-Luminova specialist RC Tritec, via hand painting with the aid of a microscope – an hour long process.

On the other hand, the rest of the dial is made in-house, with Mr De Rijke producing the components and painting them by hand in his workshop located in Dordrecht, a city an hour’s south of Amsterdam. 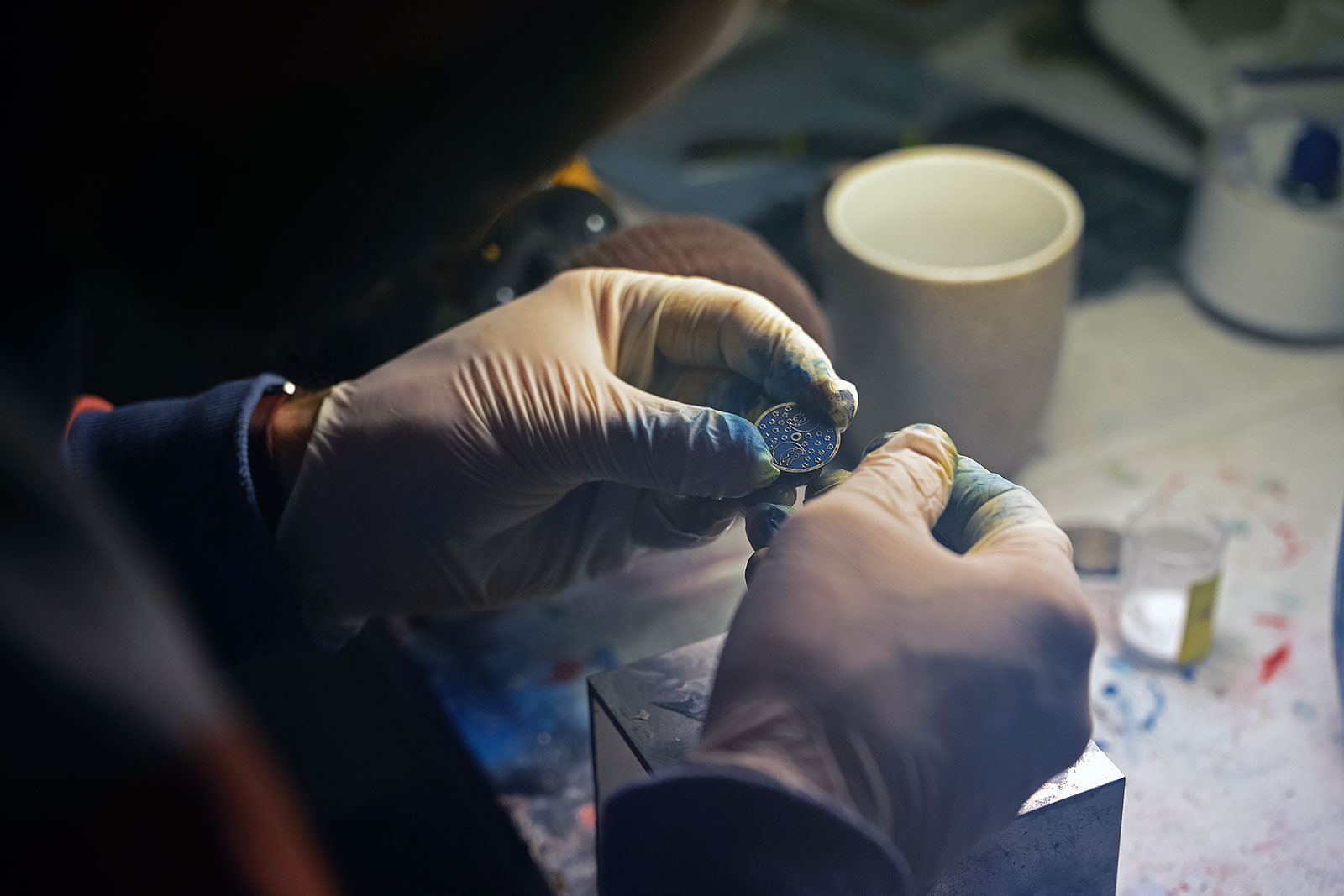 Under the closed back – which is engraved with a line drawing of Miffy – is a Sellita SW 288-1. It’s essentially a clone of the ETA 2801, but with the addition of a moon phase mechanism.

More complex was the process of modifying the Amalfi case to accommodate the movement with a moon phase. That required a different sapphire crystal, milling out the movement ring, and a closed case back according to Mr De Rijke. 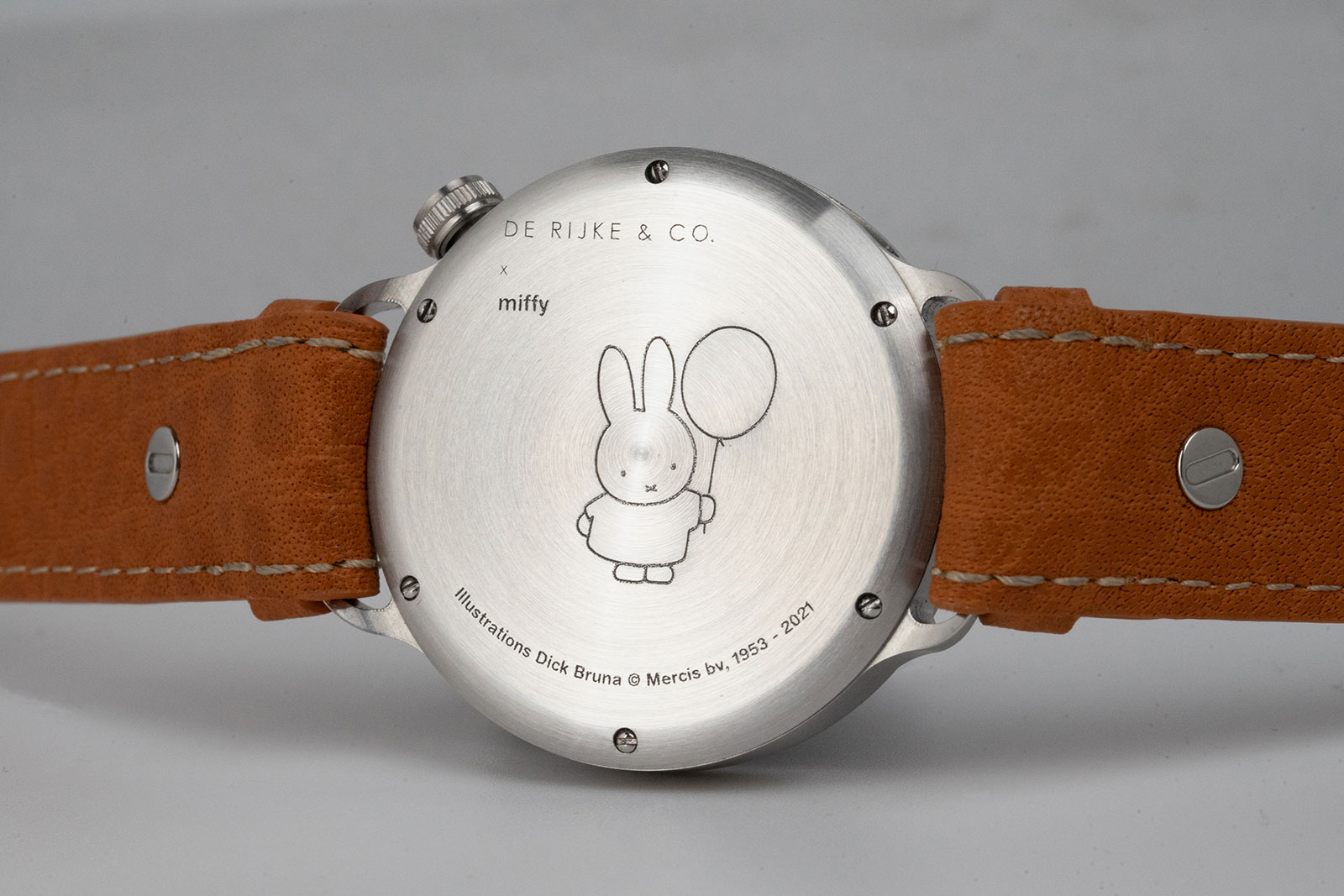