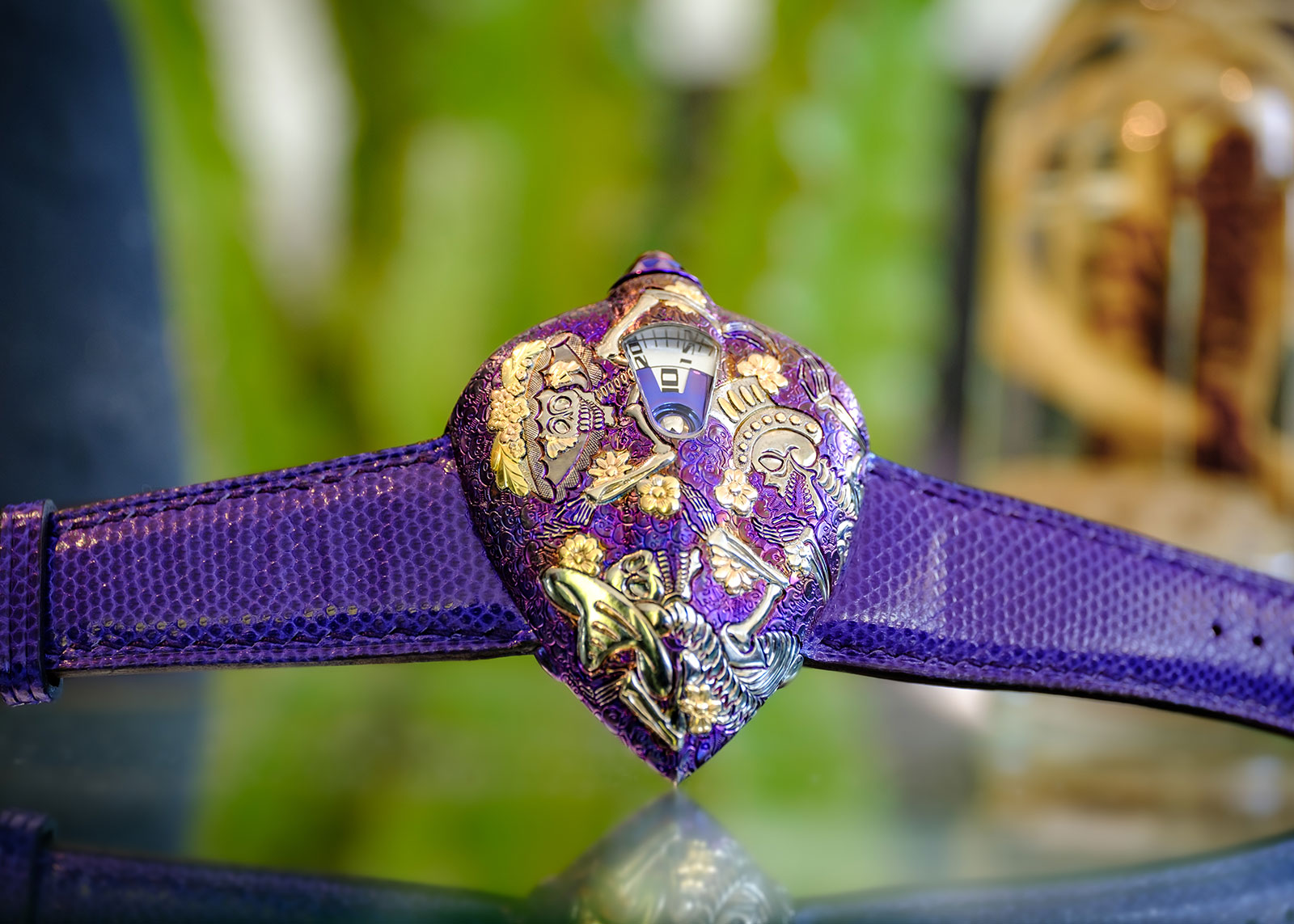 The Cempasúchil is a unique piece that’s the latest instalment in the Dream Watch 5 (DW5) series that started out as a sleek creation resembling a metallic seashell. More recently, the DW5 has more recently been used as a blank canvas for heavily decorative engraving, something the Cempasúchil takes that to the extreme.

The titanium case of the Cempasúchil is heat blued and inlaid with gold in various colours, forming an intricate yet cartoonish motif inspired by the Mexican festival of Día de Muertos, or Day of the Dead. And that explains the model name, which is also a type of marigold also known as flor de los muertos, or “flower of the dead”. 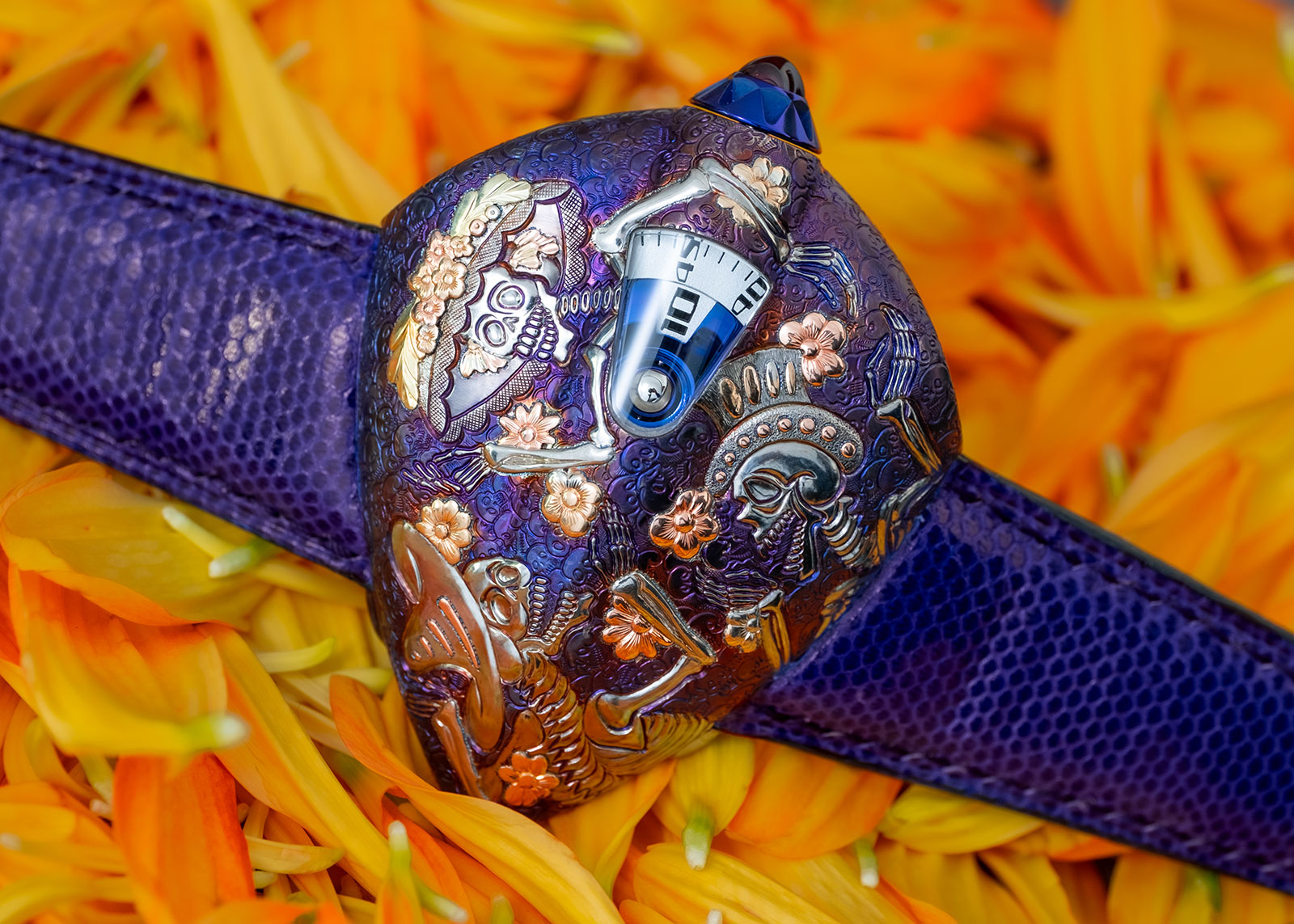 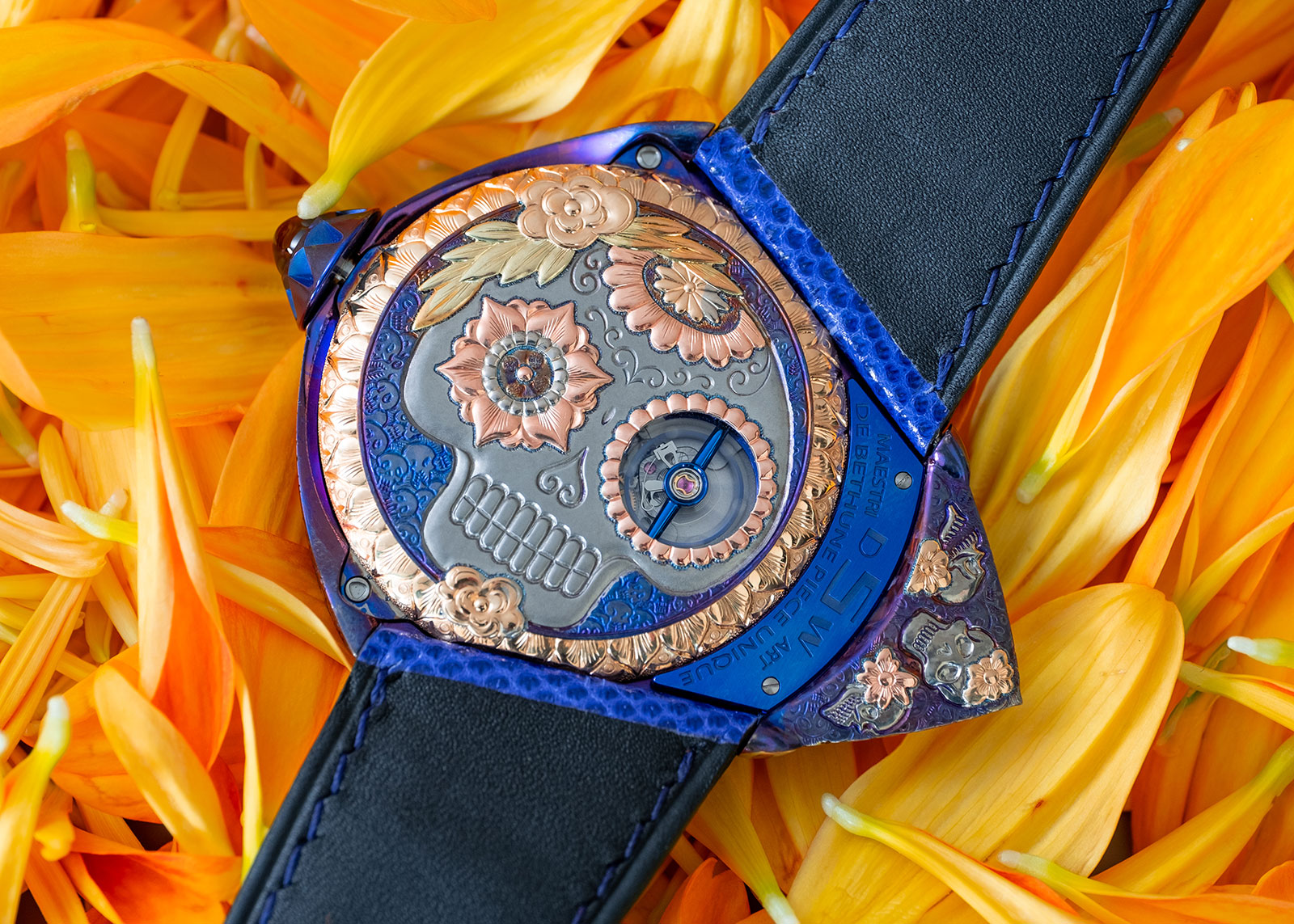 Done by De Bethune’s go-to engraver, the quality of the work on the Cempasúchil is unmistakably high quality. And the multi-coloured gold inlay elevates the work to another level entirely.

And the exuberant, whimsical of multiple calavera, or decorated skulls, is very much in keeping with the spirit of the Day of the Dead, a celebration of the departed rather than a sad occasion. 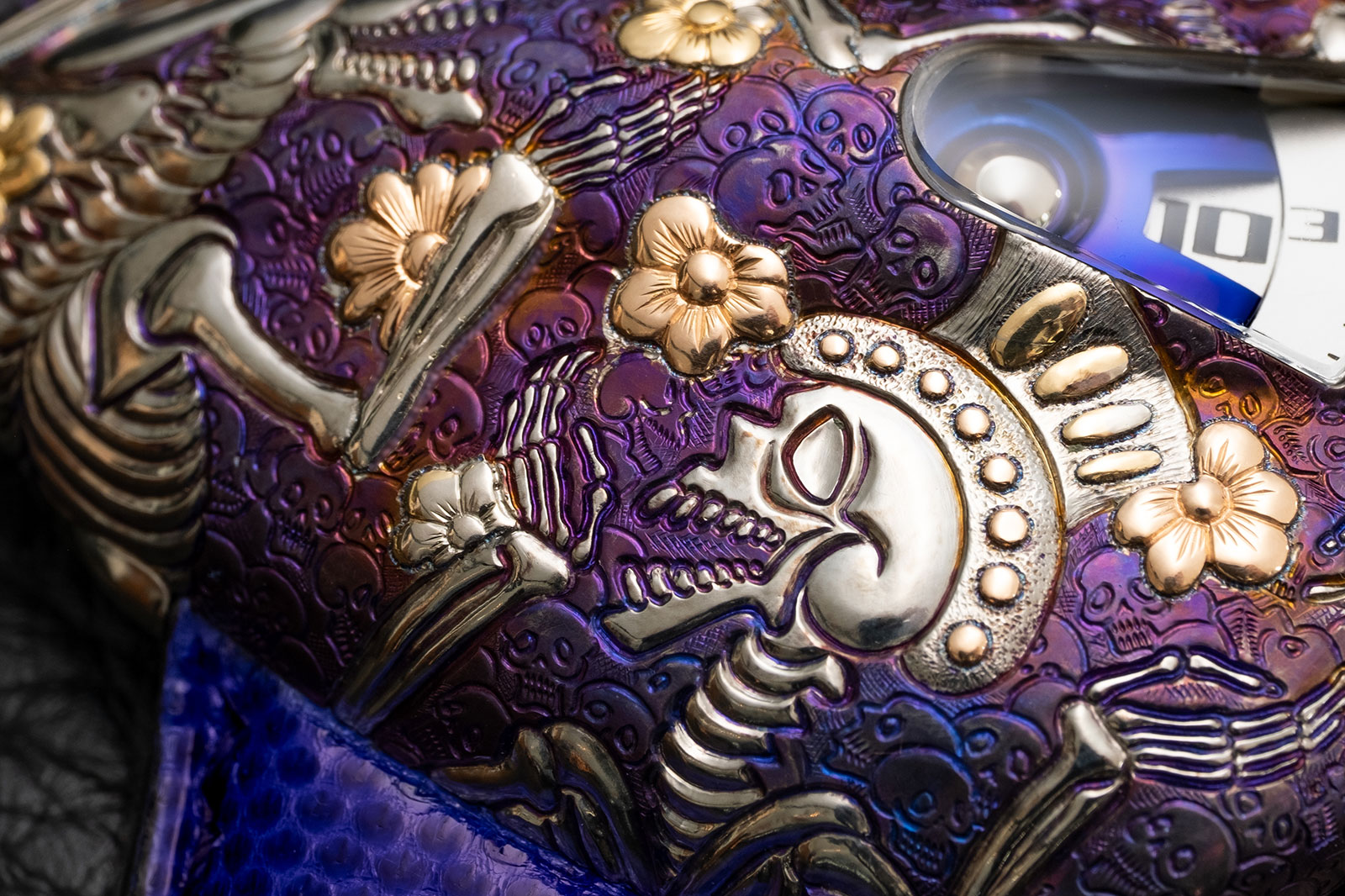 But the combination of the DW5 and the motif doesn’t gel. Traditionally seamless, the DW5 has an organically sci-fi aesthetic that looks great unadorned, and sometimes goes well with similarly sci-fi decoration. But with the Day of the Dead motif, the Cempasúchil is, to borrow a phrase favoured by De Bethune, kind of bizarre. A similar motif was applied to the one-off Chopard L.U.C Perpetual T from two years ago, and it worked better there.

Like De Bethune’s other engraved watches – which are now collectively known as the Maestri’Art collection – the Cempasúchil is the work of Swiss engraver Michèle Rothen. Her engraving renders in brilliant detail a motif inspired by the work of José Guadalupe Posada, a 19th Mexican artist and printmaker whose illustrations were often centred on political or cultural issues. 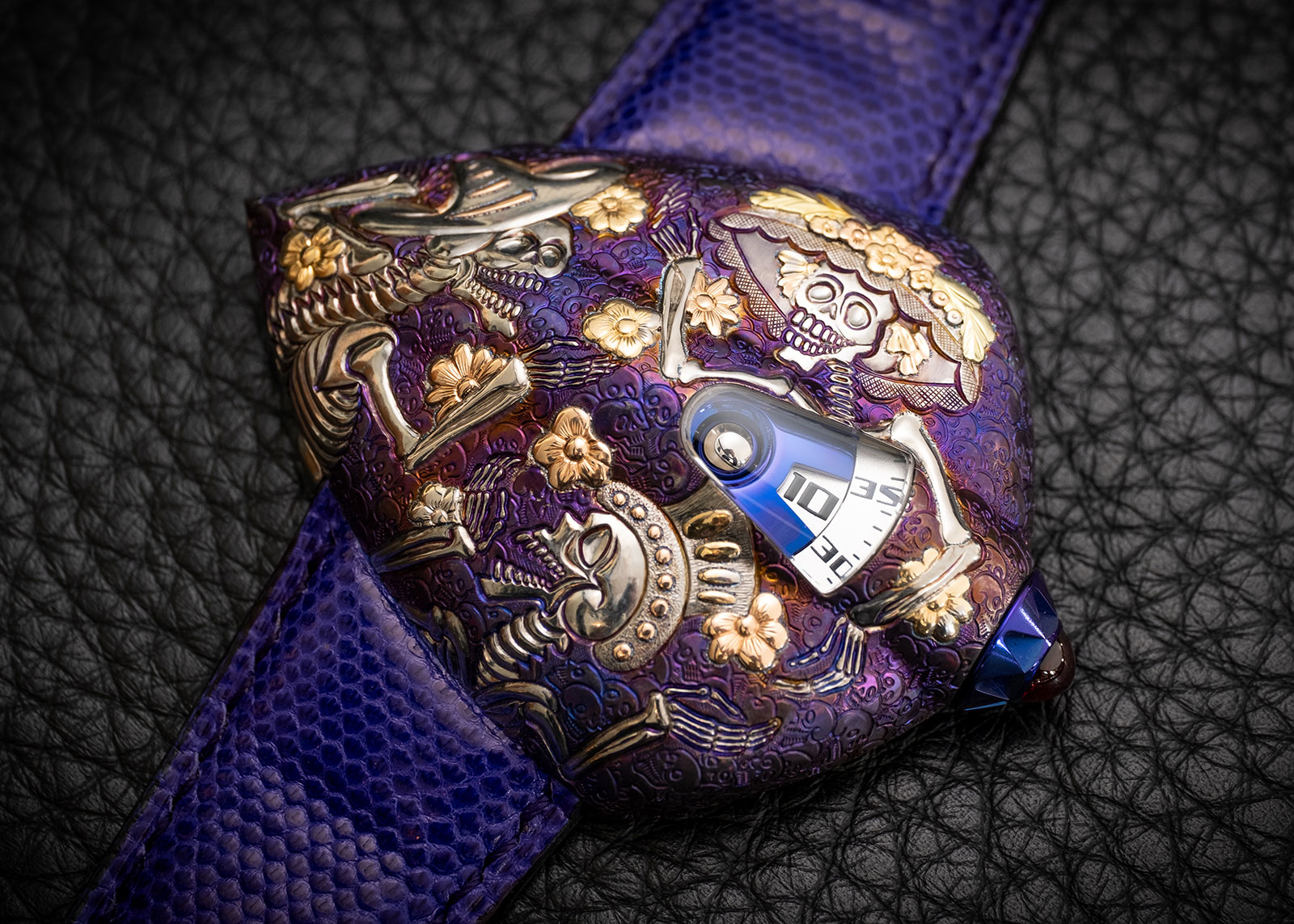 In fact, Ms Rothen’s work is taken to a new level on the Cempasúchil, which is inlaid with four gold alloys – white, yellow, rose, and green – along with a fifth “marbled” gold that blends all four colours in a layered alloy. The metallurgical magic is the work of Denis Flageollet, the technical wizard of De Bethune who also has his own foundry at its factory.

The titanium case – blued over a flame – started out as a shell, which was then machined to create recesses to fit the inlays. Ms Rothen engraving covers both the inlays and the case, across the front and back of the watch. 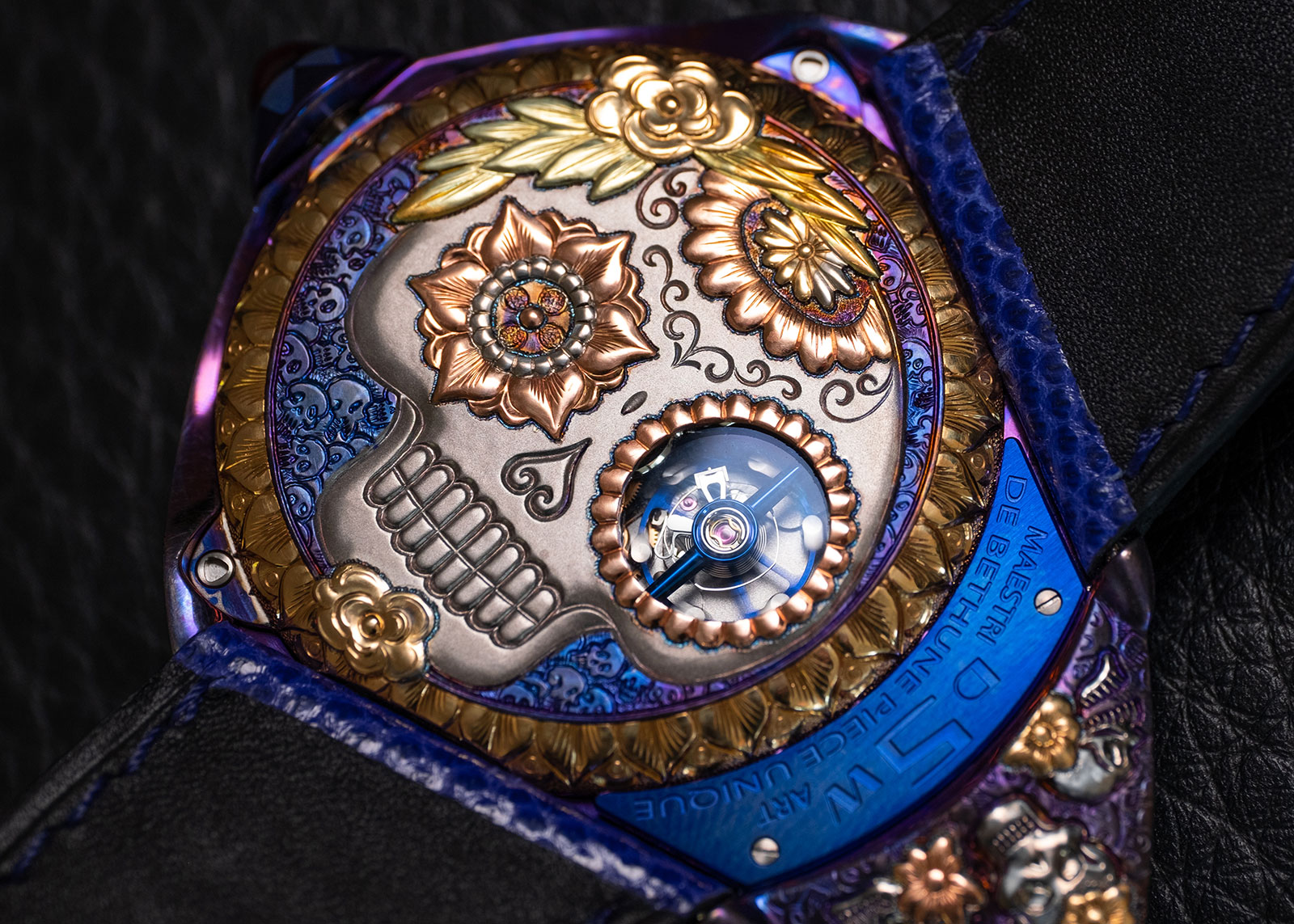 The back has an aperture within one of the skull’s eye sockets, revealing the balance held by a blued titanium bridge

The DB2144V2 movement inside is identical to that found on the standard DW5. Like many De Bethune movements, it is equipped with a balance wheel and escape wheel in silicon, both of the brand’s own design and manufacture.

It’s hand-wound with a five day power reserve, with the time indicated in a narrow window on the right of the case. The hours are shown on a jumping disc, while the minutes on a constantly turning scale. And closer to the centre of the watch is a spherical moon phase that’s made up of two halves in blued steel and palladium respectively.