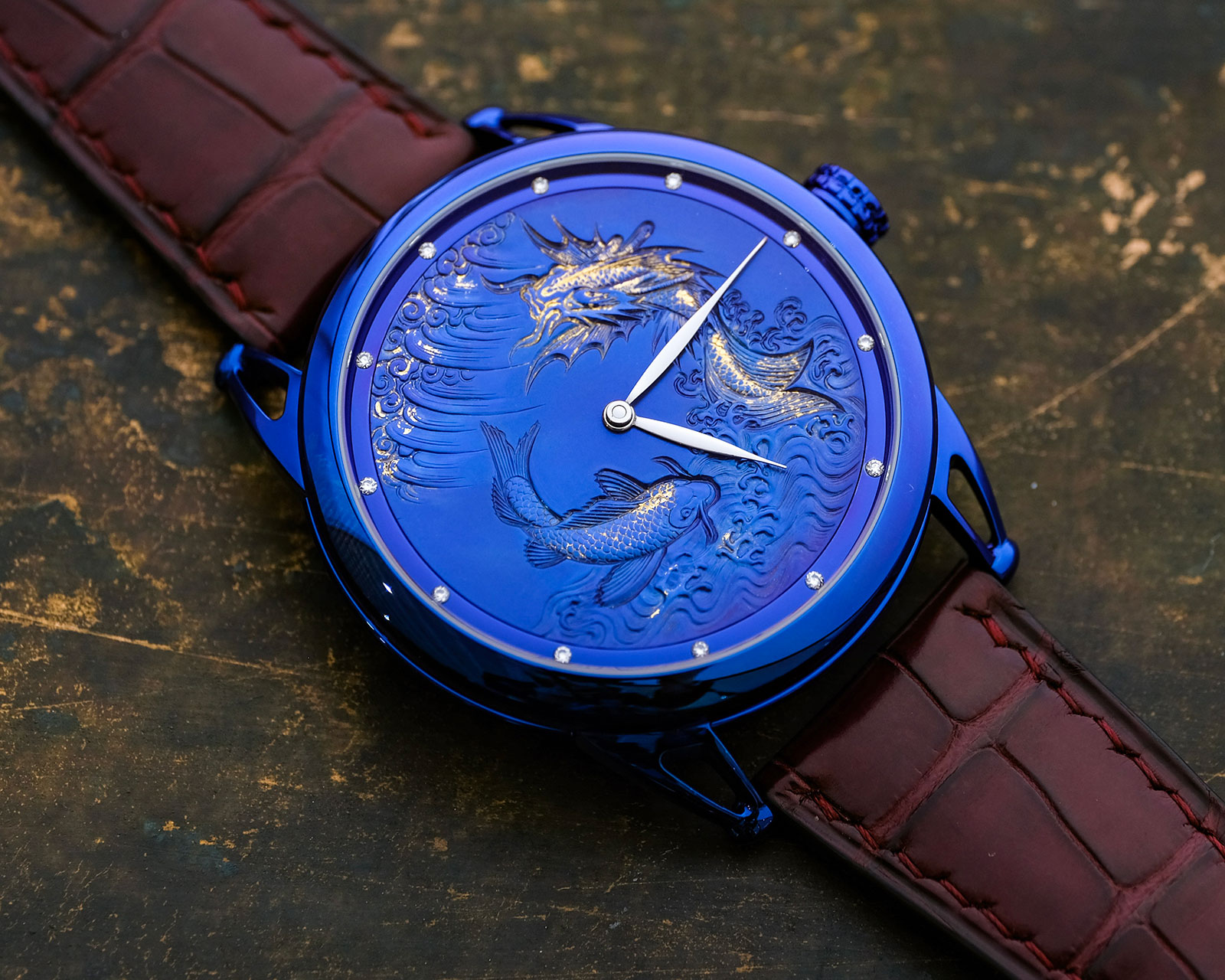 De Bethune’s wide ranging aesthetic has in the past utilised Mayan and Aztec elements for some strikingly styled watches. Now the watchmaker turns to East Asia for the Maestri’Art collection, which makes its debut with a pair of watches decorated with motifs inspired by Japan and China. The Maestri’Art marks a return to Asian influences in its watch design, after the Imperial Fountain Chinese Zodiac watches of 2014.

Both watches were engraved by Michèle Rothen Rebetez, a Le Locle-based engraver who’s one of the best in her field. She’s worked for De Bethune in the past, and also Parmigiani and Girard-Perregaux amongst others.

The Maestri’Art I is based on the DB27 Titan Hawk V2, with the brand’s signature sprung lugs. But instead of the liberal use of polished metal synonymous with De Bethune, the Maestri’Art I is entirely black and gold, inspired by tsuba, the hand guard of Japanese swords, or katana. Tsuba were often made of various metal alloys, and often decorated. A common decorative material used was irogane, a family of coloured copper alloys, often inlaid with gold. Specifically, the material De Bethune used for the case and dial is similar to shibuichi, an alloy of silver and copper that’s been patinated to give it an almost black surface, which is then decorated with gold highlights.

The dial depicts a dragon and tiger in relief, while the case back continues the motif, showing the back of the dragon. The Maestri’Art I is powered by the same movement found in the Titan Hawk, the AutoV2. It’s a self-winding movement with a 60-hour power reserve, as well as De Bethune’s patented silicon balance wheel with gold masses, which is visible through a small opening in the case back. Maestri’Art II is quickly recognisable as a De Bethune, being entirely in blued titanium. It’s based on the DB25, with a 42mm case in polished, blued titanium.

The dial is also blued titanium that’s been engraved by hand and accented with fine gold leaf inlaid onto the surface. It depicts a carp and a dragon, a reference to the Chinese myth that believes a carp which is able to jump the Dragon Gate of the Yellow River will turn into a dragon.

The hour markers are small round diamonds, while the leaf-shaped hands are polished steel. Inside is the hand-wound DB2005 movement inside that will run for six days on a full wind. It’s equipped with De Bethune’s proprietary adjustable mass balance wheel, as well as a silicon escape wheel. Both watches are unique pieces. The Maestri’Art I is priced at SFr135,000, while the Maestri’Art II in blued titanium is SFr110,000. Prices exclude taxes.