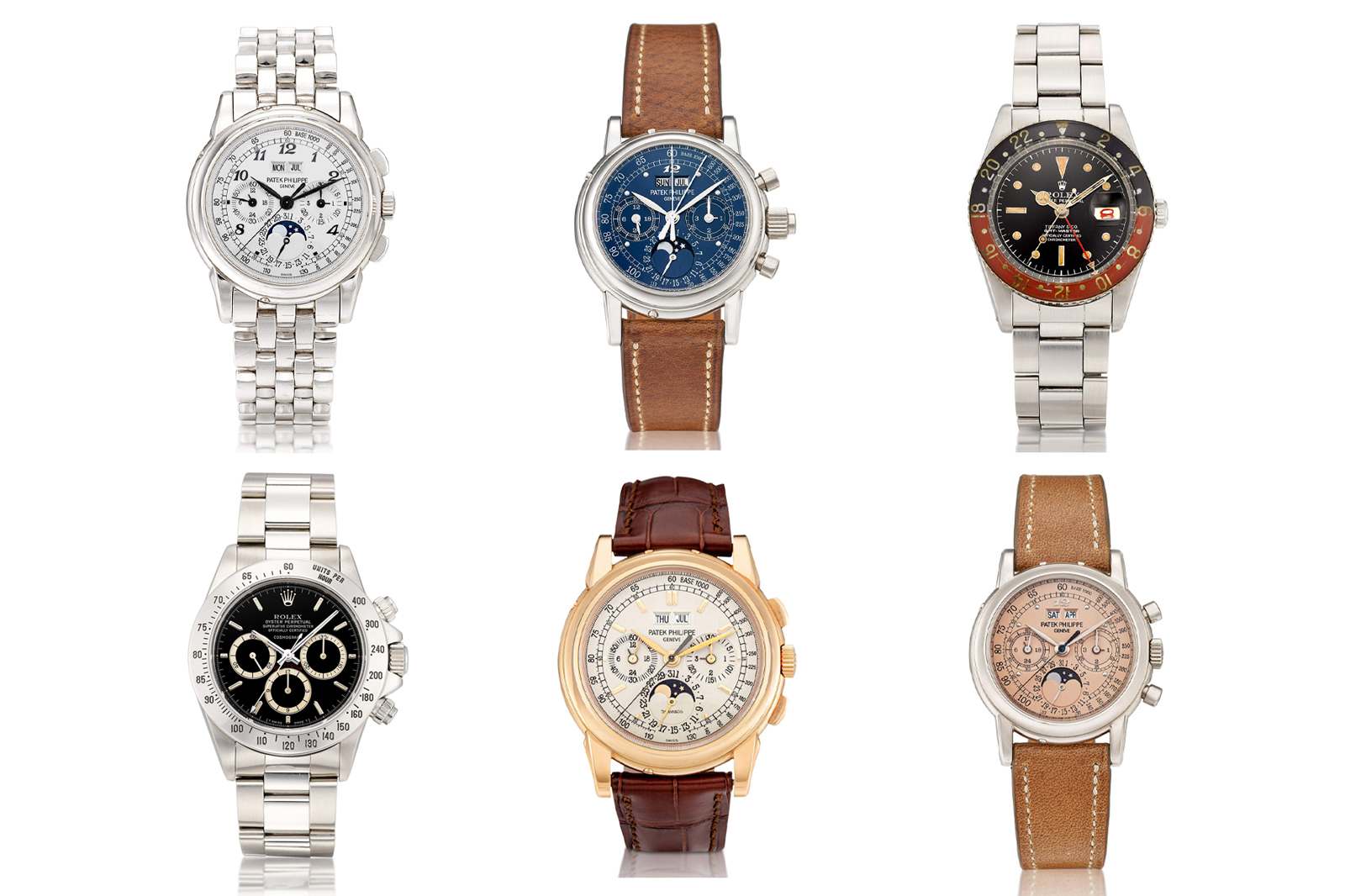 Sotheby’s upcoming Hong Kong auction is a major event – 266 lots is sizeable – but boasts a surprising lineup of historically significant watches in a variety of genres, from establishment brands to independent watchmaking (including a dozen F.P. Journe), and even museum-quality, enamelled automata.

Now we turn to an unusual group of watches from the collections of two well-known watch collectors: musician Eric Clapton and Japanese streetwear guru Hiroshi Fujiwara (who last year designed a watch for TAG Heuer). 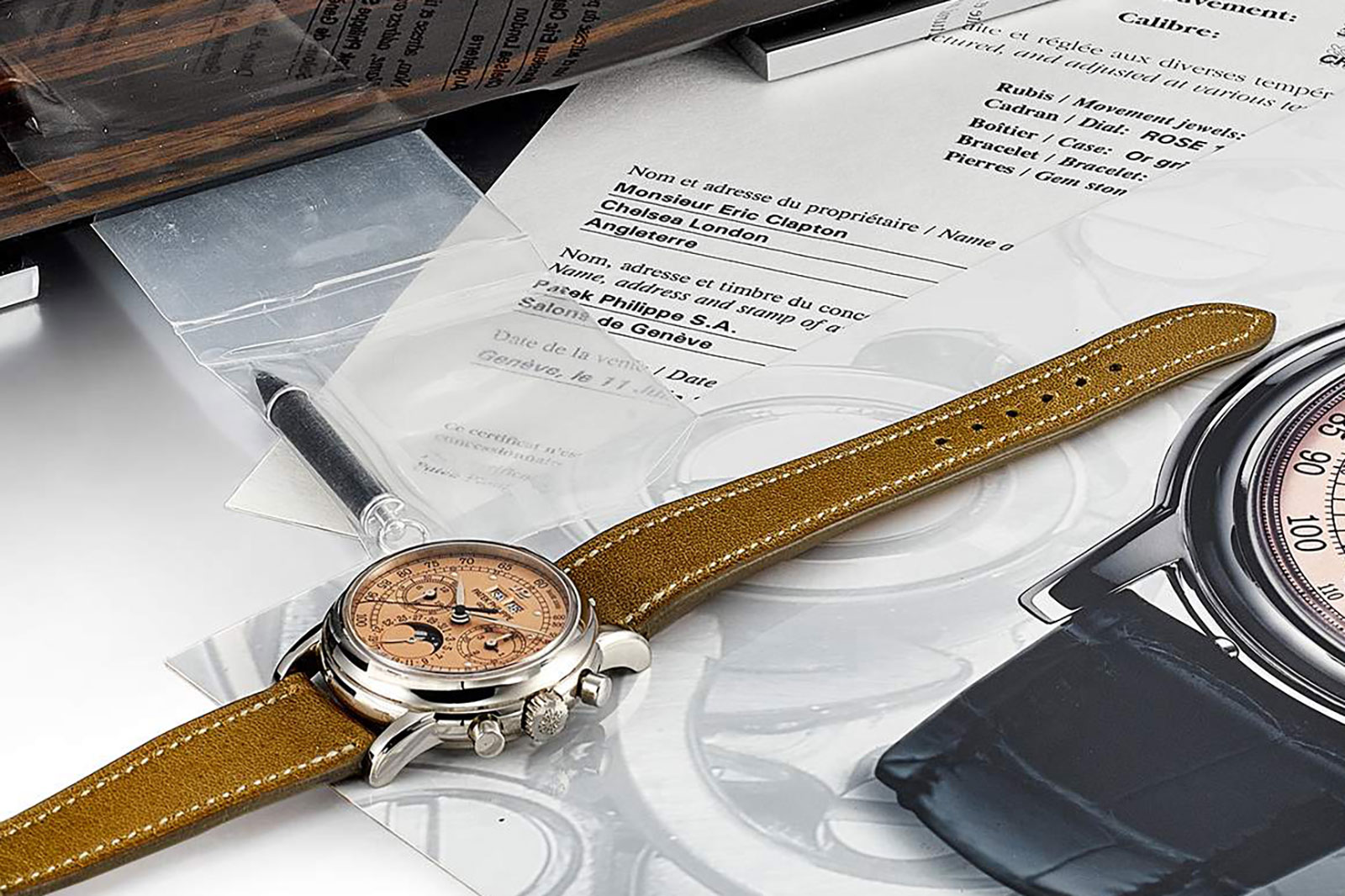 The all important name on the certificate

The ex-Clapton watches have been consigned by the current owners, who number just two. The first consigned all the Rolex sports watches, which he bought direct from Mr Clapton. And the second is a prominent collector from the Southern Hemisphere who consigned the trio of custom-dial Patek Philippe chronographs commissioned by Mr Clapton, a set of watches the owner accumulated primarily at auction.

On the other hand, the watches from Mr Fujiwara’s collection come from the man himself. Mr Fujiwara consigned three watches, including a matched pair of ref. 5970 with “Tiffany” dials.

We round up eight highlights from these celebrity-owned offerings. The full catalogue and sale registration are available on Sothebys.com.

Often spotted wearing notable watches, modern and vintage, Eric Clapton has long been known to be a watch aficionado (and also an accomplished collector of Ferrari). Mr Clapton has evidently restructured his watch collection substantially and repeatedly in the past, going by the number of ex-Clapton watches that have been sold publicly.

The sale counts a dozen Rolex watches – mostly sports models naturally – that are ex-Clapton, with several having been purchased at the huge Rolex boutique in One Hyde Park, the ultra-luxury apartment complex nearby Harrod’s. They offer a bit of the Clapton magic at a relatively affordable price, in contrast to the Patek Philippe chronographs, which will all be well into the mid-six figures.

The first is a Daytona Cosmograph ref. 116520, the first Rolex with an in-house chronograph movement (except the little-known and uber-rare Zerographe that wasn’t a chronograph strictly speaking). 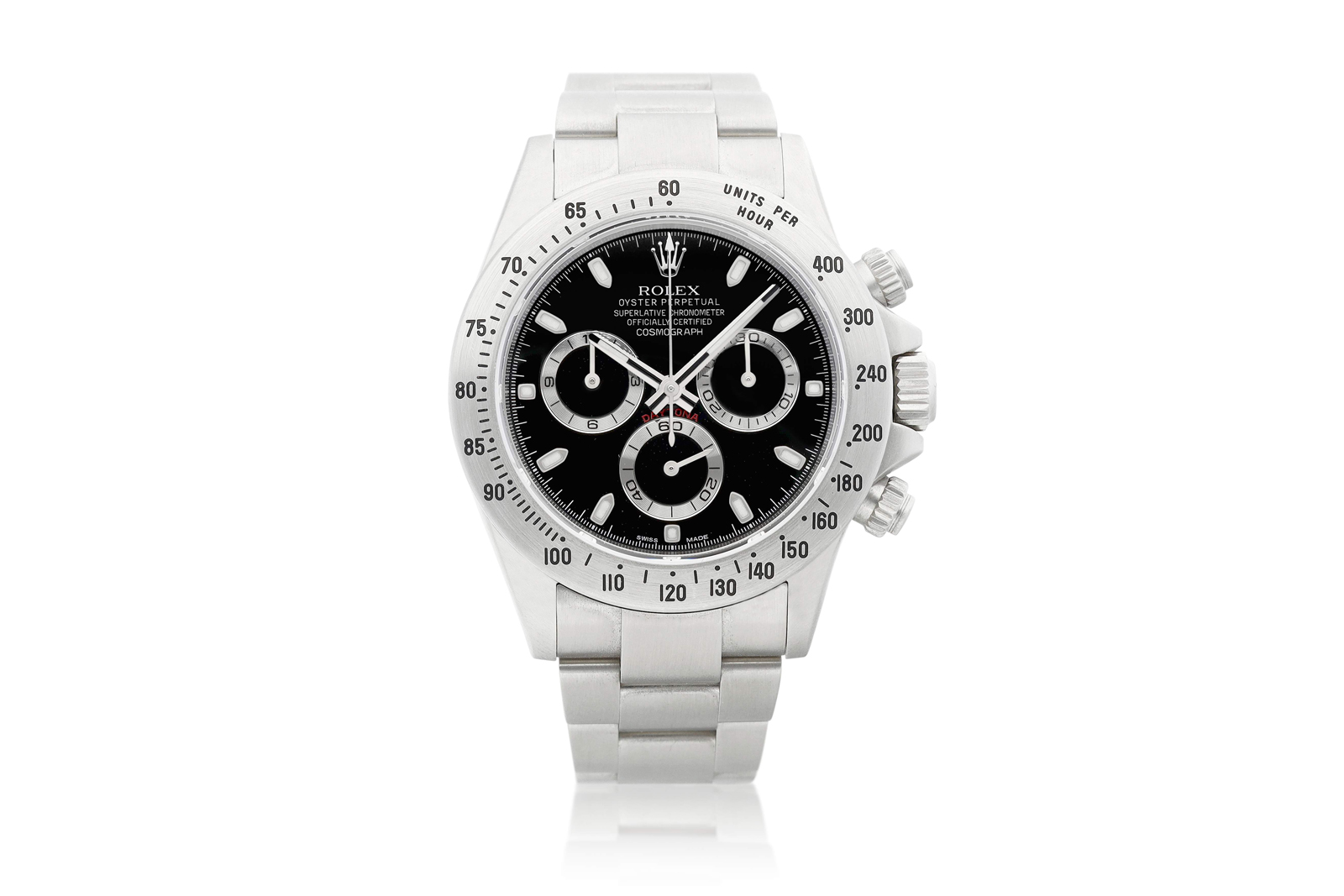 Mr Clapton’s name is on the warranty card, but that’s not the only unusual feature of this steel Daytona. The entire watch – case, bracelet, and even the sides of the case – sports a brushed finish, a modification that was requested by Mr Clapton, though it was not done by Rolex according to Sotheby’s. The result is a low-key look that brings to mind the “Zenith” Daytona.

In most cases, altering the factory finish is a no-no, but the Clapton provenance makes it entirely acceptable, perhaps even increasing its desirability. 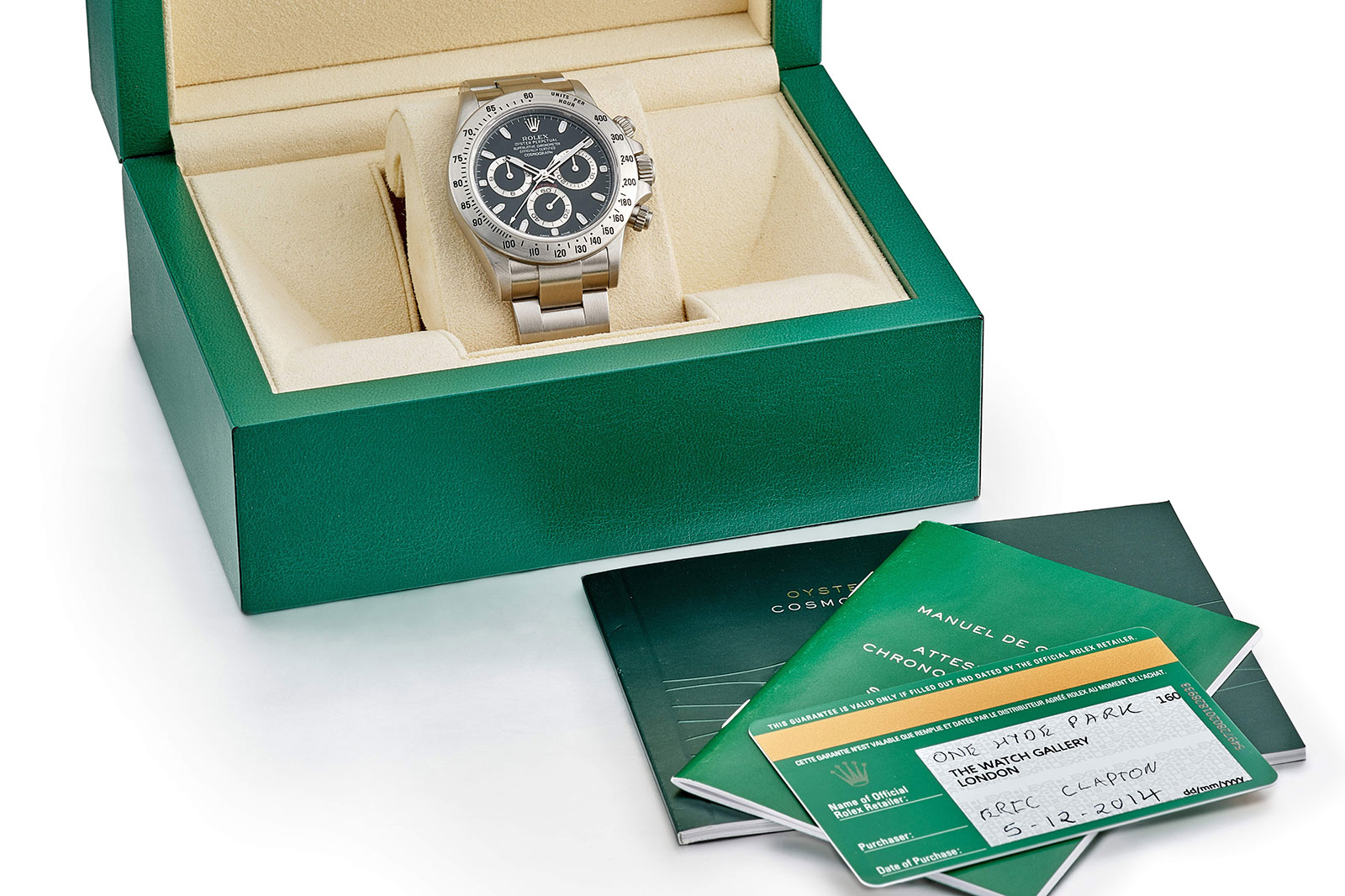 The warranty card includes Mr Clapton’s name, which is no longer possible with the latest-generation cards that omit the buyer’s name

And another element that adds to its appeal is the transitional dial, which has the last three letters of “COSMOGRAPH” further away, an imperfection in the typography that ironically makes the watch more interesting, for no reason other than the fact that Rolex is the master of industrially-produced perfection.

The second, ex-Clapton steel Daytona in the sale sale looks similar, but it’s the earlier ref. 16520 “Zenith”. Like the lot above, it has a steel case and black dial, the go-to combo for a sports chronograph.

The ref. 16520 was the immediate predecessor of the ref. 116520, and the last Daytona with an outsourced movement, namely a heavily-modified Zenith El Primero. The dial shown some ageing, especially on the rings of the sub-dials that have turned slightly yellow

And like the preceding ref. 116520, the ref. 16520 owned by Mr Clapton is a little more special than its peers. It’s a “floating Cosmograph”, with the model name printed lower than usual, putting it at a noticeable distance from the four lines of text above.

But unlike the lot above, this has the original finish on the case and bracelet that has its trademark polished centre links. Mr Clapton’s name often comes to mind when it comes to the Patek Philippe perpetual calendar-chronograph, as he has frequently been photographed wearing various examples, including the singular ref. 2499 in platinum that sold for a record price in 2012. The first one up is the ref. 3970G that has a handsome, and currently fashionable, “salmon” dial, along with the musician’s signature special request – Breguet numerals for the hour marker at 12 o’clock. On top of that, the dial has a tachymeter scale, which is absent in the regular ref. 3970.

Originally conceived by Mr Clapton and his advisors, the elements are all that set this example apart from the stock model. Though minor tweaks, they certainly matter to aficionados, because they are aesthetically pleasing.

That said, this is not the only ref. 3970 with Breguet numerals. Mr Clapton himself owned several variants, but Patek Philippe later unveiled several near-identical limited editions in 2015 to mark its 175th Anniversary Grand Exhibition in London. 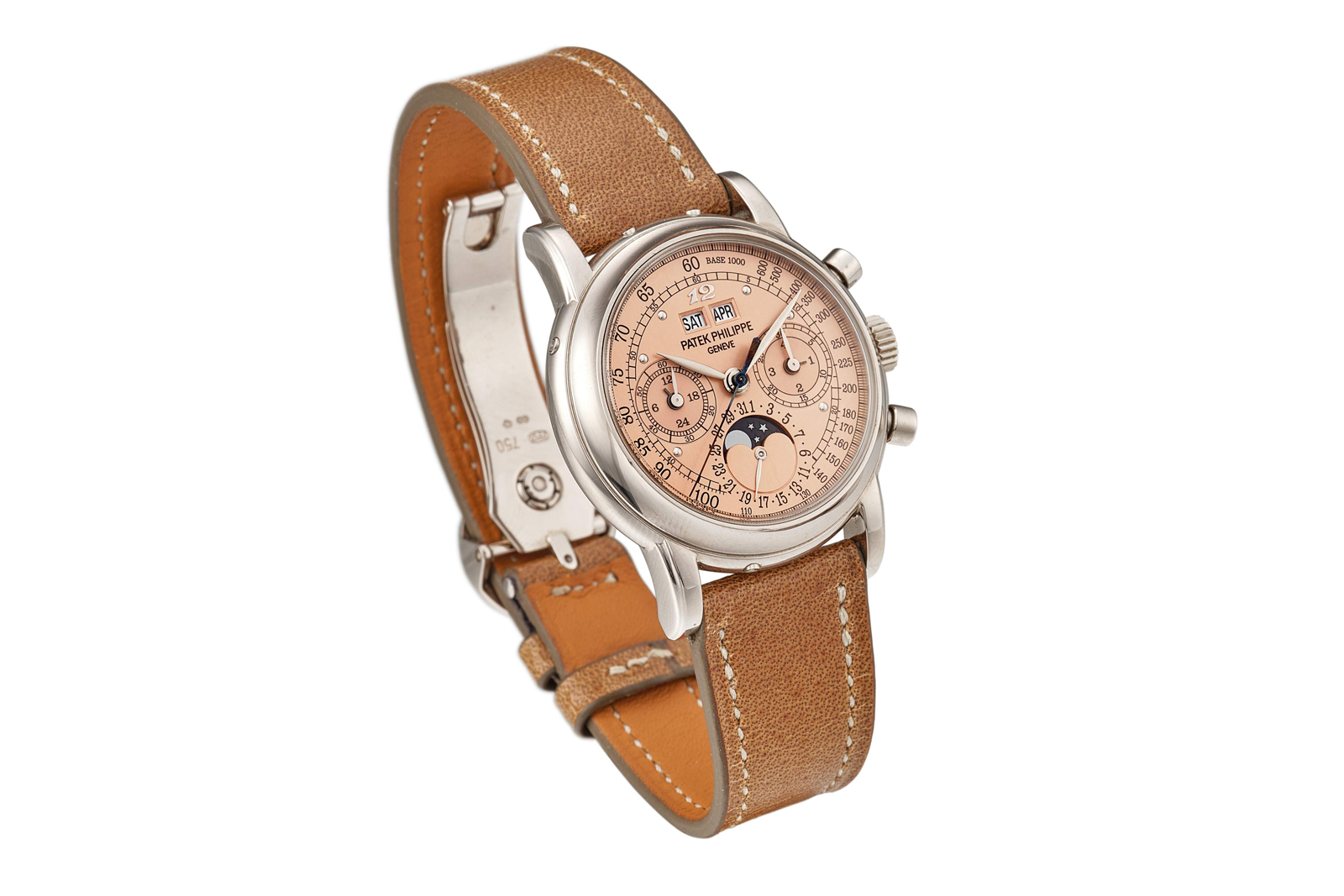 The last time this watch sold in 2016, it achieved about US$460,000 inclusive of fees. The watch-collecting landscape has changed since then, with values have risen tremendously across the board, so it will most likely sell for more this time round.

The top lot of the ex-Clapton perpetual calendar-chronographs is unquestionably the ref. 5004P with a striking blue dial that first sold at auction in 2016, where it achieved a little over US$800,000 including fees.

Essentially the ref. 3970 with an added split-seconds mechanism, the ref. 5004 was a small but thick watch due to the added complication. It was later replaced by a successor that’s in-house and technically superior, but the ref. 5004 has an old-school charm thanks to the anachronistic Lemania base movement. 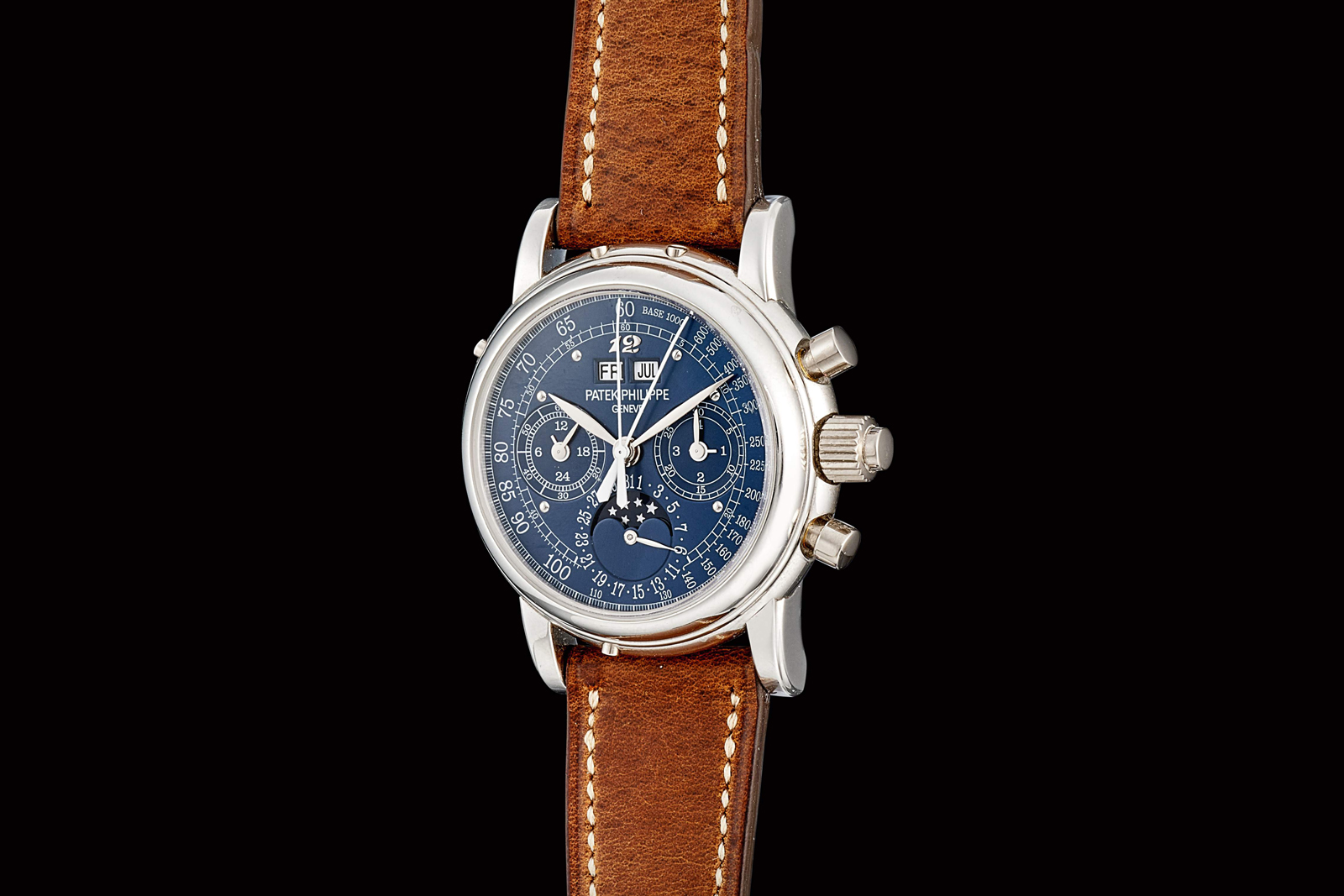 That appeal is compounded by Mr Clapton’s trademark customisation: the Breguet-numeral marker at 12 and tachymeter, set against a metallic-blue dial. Like the ref. 3970G above, the ref. 5004P is minimally different from the standard versions in a tangible sense since both the case and movement remain unchanged, but different enough to make it special. 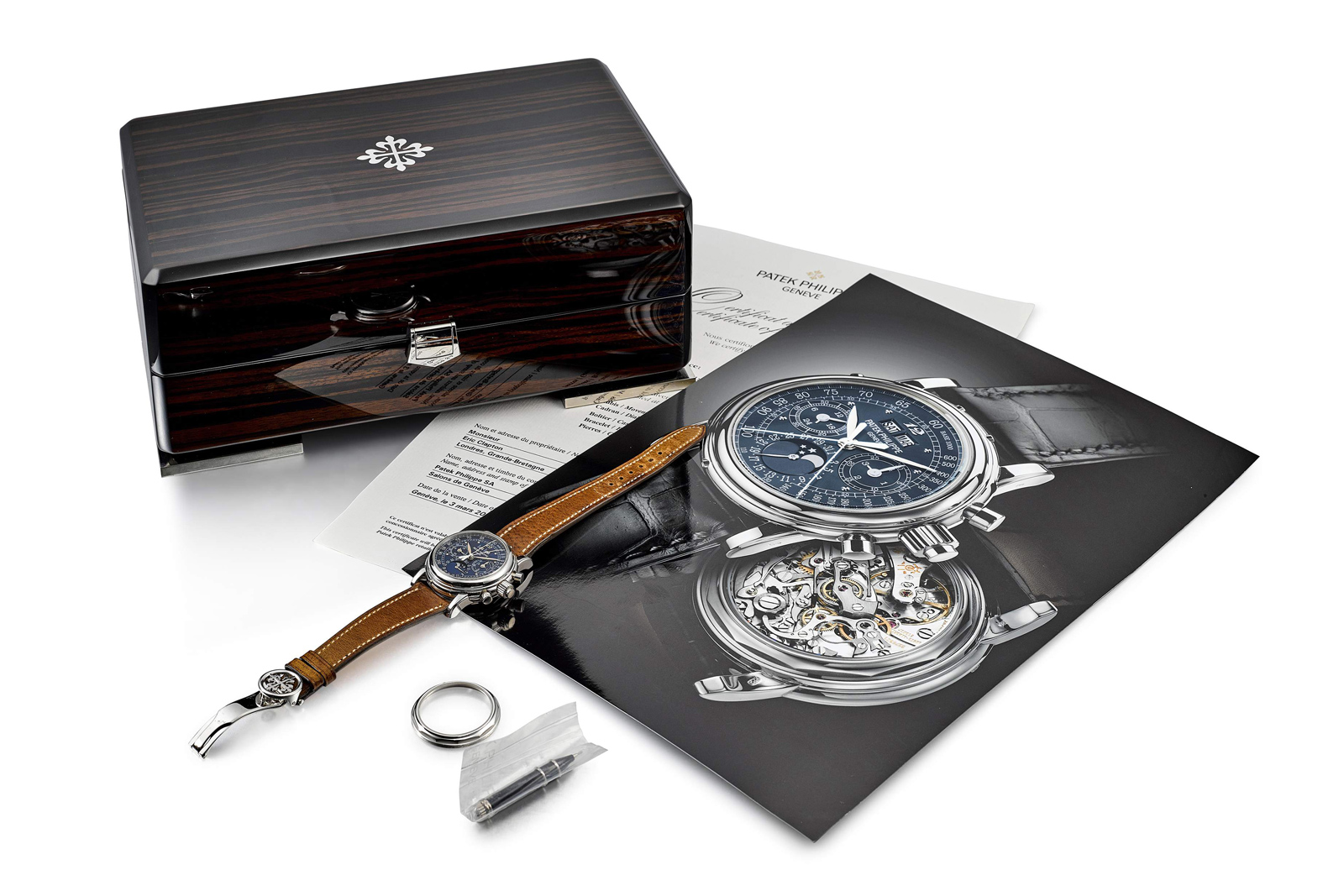 The last ex-Clapton Patek Philippe perpetual calendar-chronograph is a doubly-special ref. 5970, the watch that replaced the ref. 3970. Like the other two in the sale, this is a watch was first sold publicly a few years ago, where it went for around US$630,000 all-in.

But unlike the other two, this watch has both a custom dial, as well as a special-order “brick” bracelet. 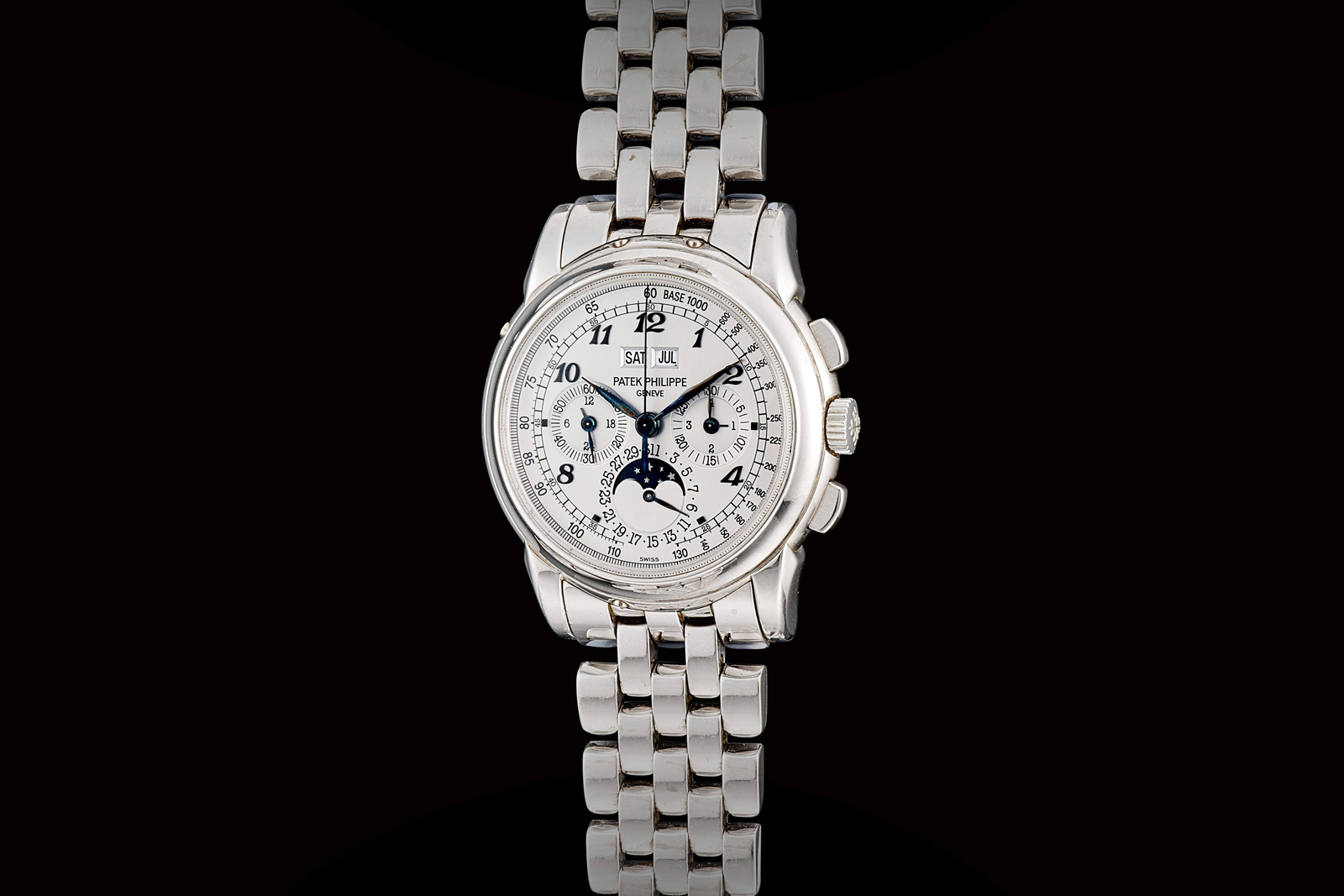 Once again, the dial reflects Mr Clapton’s classical inclinations, with Breguet numerals that evoke midcentury Patek Philippe wristwatches. This one has Breguet numerals all around the dial, instead of just at 12 o’clock like the other two. However, the rest of the dial remains identical to that of the stock ref. 5970, in both its silver colour and outer tachymetric scale. But it is set apart by the white gold bracelet that gives the ref. 5970/1G a a sporty and casual tone that’s unusual for such a watch. And perhaps because of the casual style, the ref. 5970/1G was reputedly worn often by Mr Clapton, having arrived in well-worn condition when it was first offered for sale in 2018 – in contrast to most of Mr Clapton’s watches that have emerged, almost always in pristine condition.

Unlike the ex-Clapton watches, the Fujiwara watches are straight from Hiroshi Fujiwara’s collection and share a common feature – the “Tiffany & Co.” signature on the dial.

A Japanese streetwear designer who founded Fragment Design, Mr Fujiwara is known to be a watch collector, having featured part of his collection on his website and social media. And it happens he is also a musician who has recorded a song with Mr Clapton, as well as having designed several guitars for the English musician that were produced by Martin Guitars.

Developed by Rolex at the behest of Pan American Airways (PanAm), then the world’s biggest airline, the GMT-Master ref. 6542 was launched in 1955 as a tool to help pilots keep time in different time zones.

Produced for a short period, from 1955 to 1959, the uncommon ref .6542 was also equipped with a Bakelite bezel, which was so brittle few have survived in their original state. This is a ref. 6542 with its original bezel, as well as a Tiffany-stamped dial. In fact, this is the first ref. 6542 “Tiffany” to ever surface publicly.

History indicates it is exceptionally rare for the simple reason that the American jeweller only started retailing Rolex watches with its logo in the late 1950s, when the ref. 6542 was about to be discontinued. According to Sotheby’s, the dial print and case serial number are all period correct Mr Fujiwara’s appreciation of the subtle difference bestowed by the jeweller’s name on the dial is evident in the matched pair of ref. 5970s.

The last perpetual calendar-chronograph to contained an outsourced movement, the ref. 5970 has a distinctively traditional design, despite its modern case size. Its successor, the ref. 5270, is more modern in style, with its in-house movement resulting in counters positioned below the dial’s horizontal bisector. 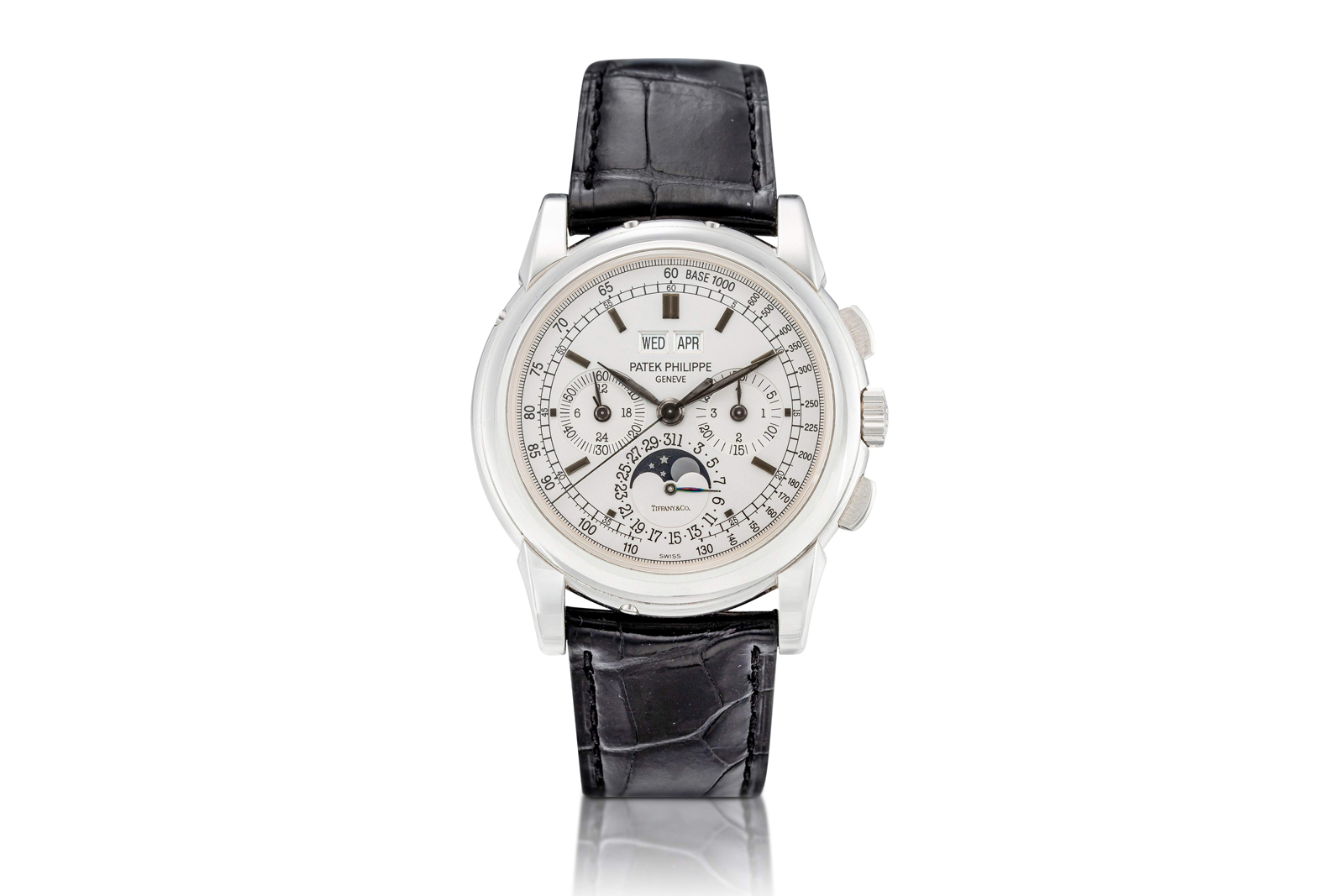 Though there is no shortage of ref. 5970s with special dials, including Mr Clapton’s watch above and the four-piece set to mark the end of last of Lemania-powered watches, the ref. 5970 “Tiffany” still manages to stand out, primarily for historical reasons. The American jewellers has particular stature in relation to Patek Philippe, being the oldest, and perhaps largest, retailer of the brand in the United States. 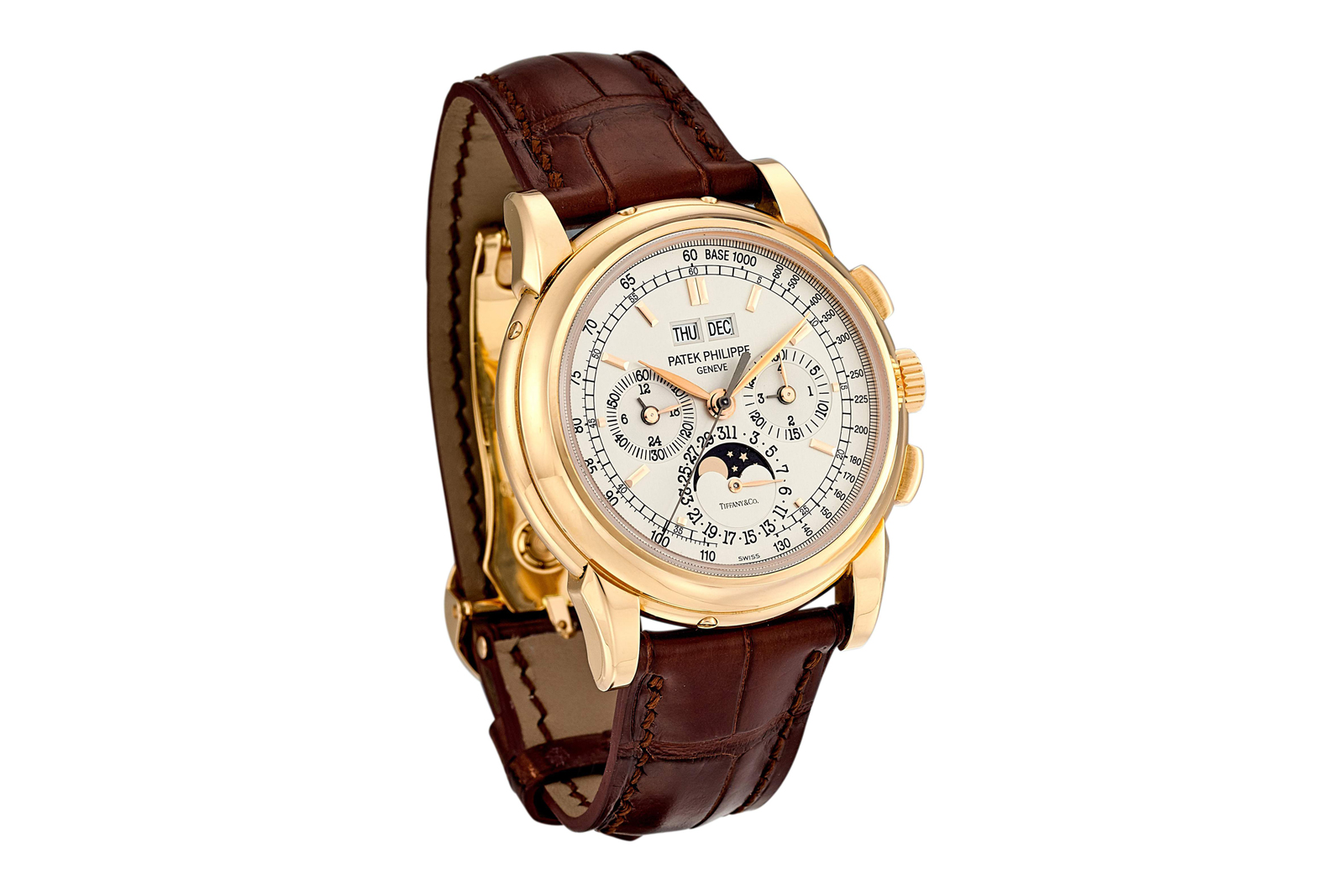 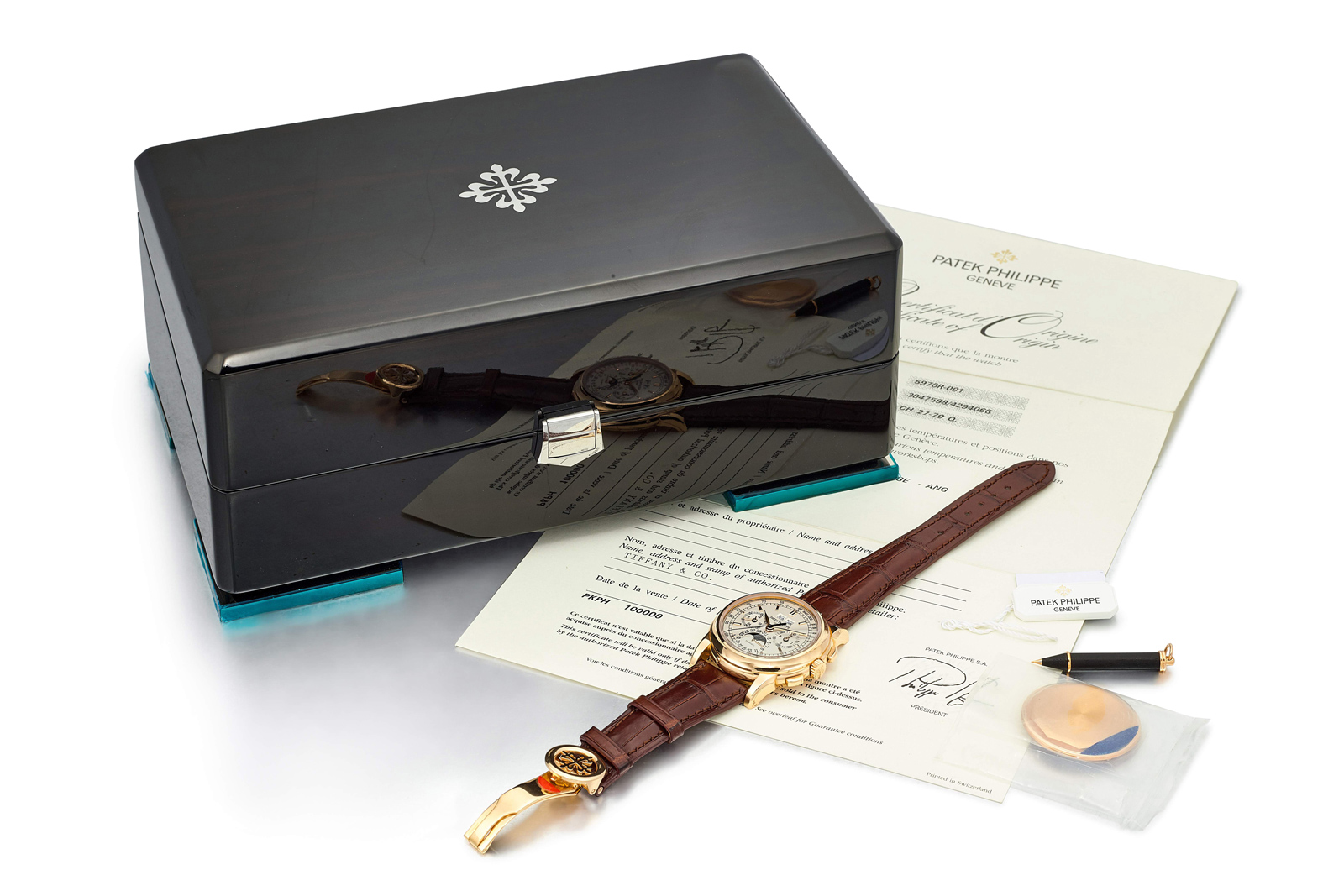 Both of Mr Fujiwara’s examples appear to be in mint condition. And they are complete, having the original boxes and papers, as well as the solid case back.

A elegantly striking watch made for Slowhand.