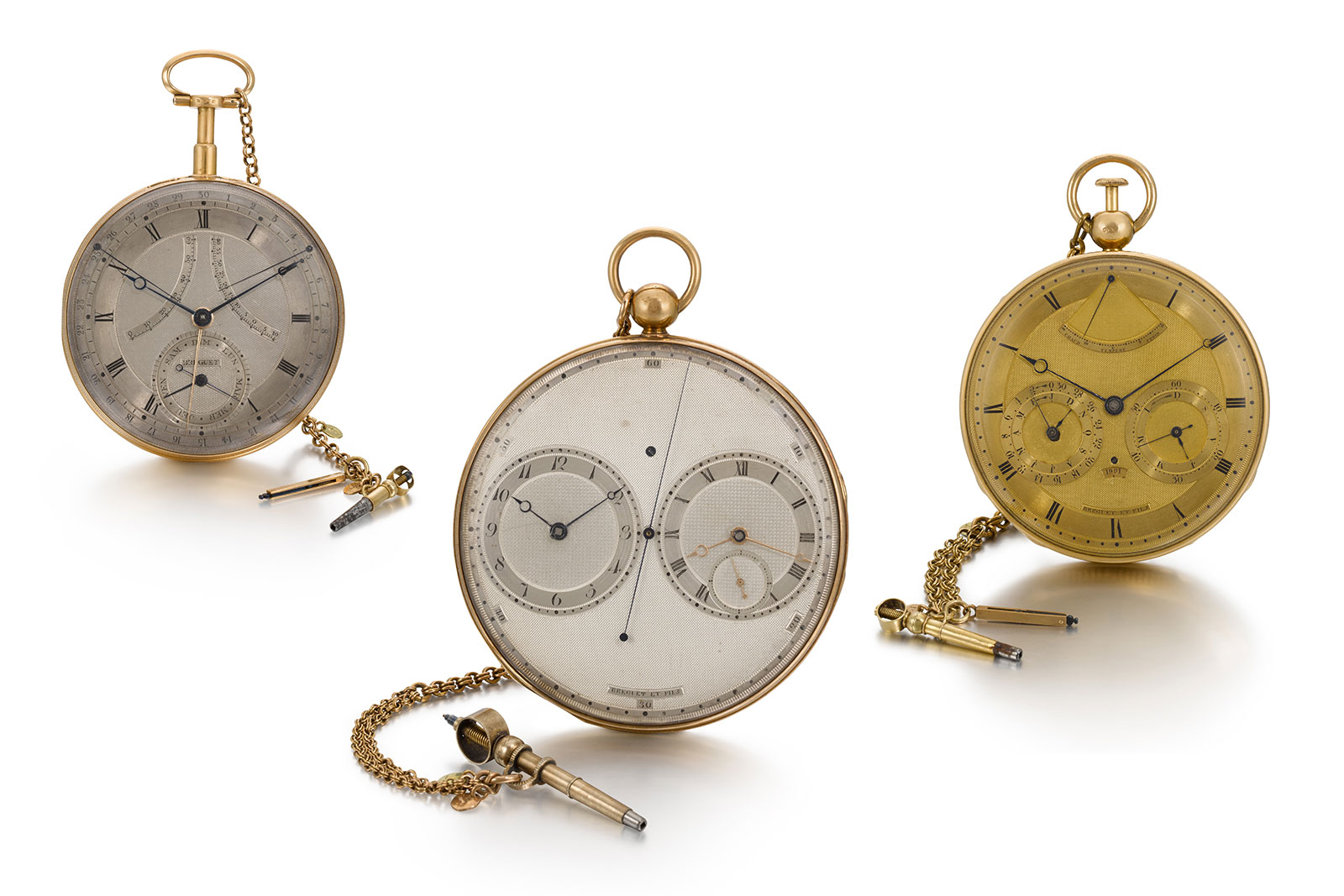 Sotheby’s watch auction at the end of October will be headlined by a trio of historically important and highly complicated Breguet pocket watches that were all once owned by royalty, and then part of the David Salomons Breguet collection.

The top lot will unquestionably be Breguet no. 2788, nicknamed “The Prince Regent’s Resonance”, an experimental 1818 watch with twin balance wheels operating on the principle of resonance.

[Update October 27, 2020: The sale of watches from The Museum for Islamic Art will be postponed until sometime in November 2020, due to the museum having decided to rethink the deaccessioning of part of its collection.] 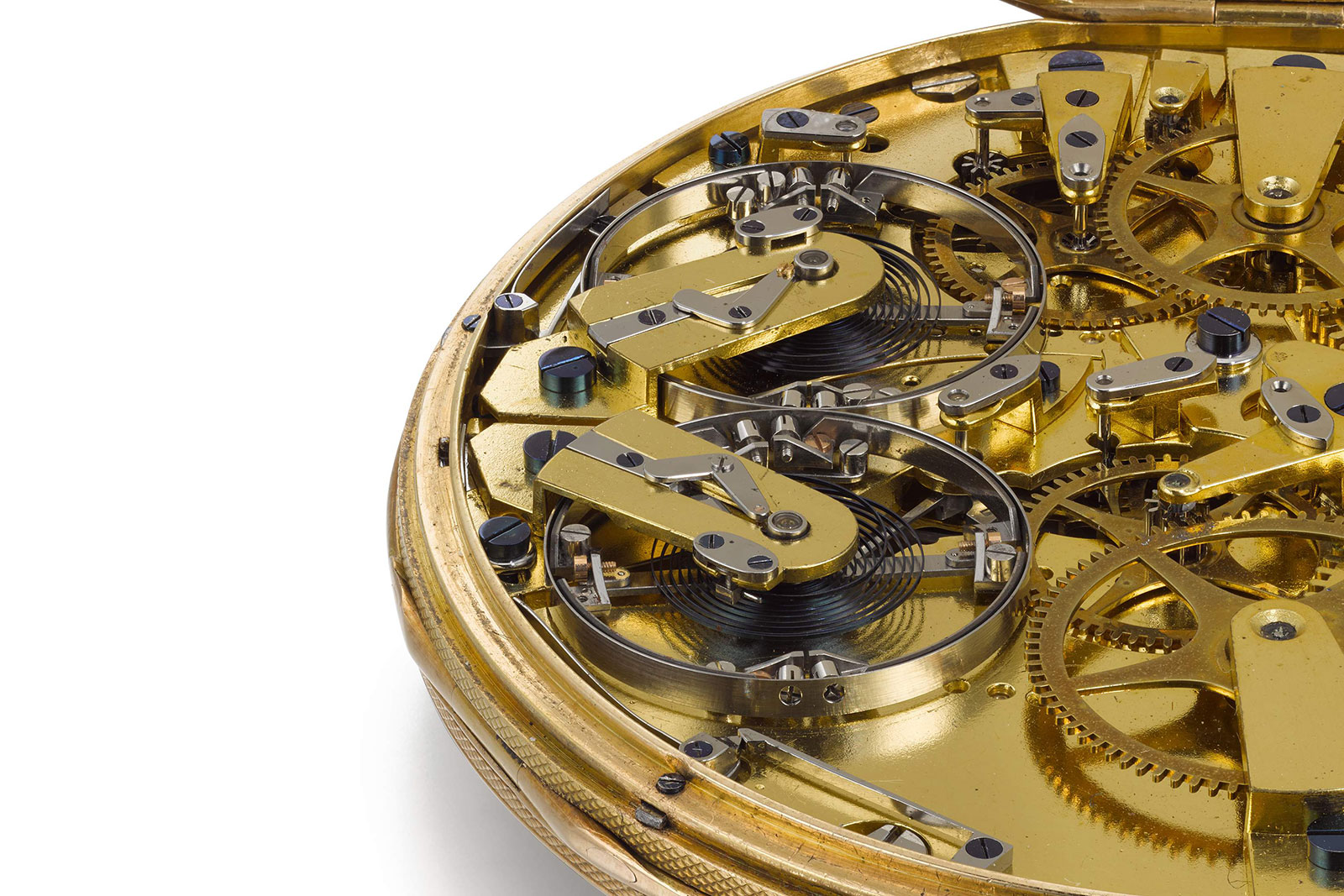 The twin balance wheels of Breguet no. 2788

Given their hallowed provenance, the trio of Breguet watches being offered for sale is surprising, but perhaps in keeping with the times. Despite the golden age of pocket watch collecting having seemingly come to an end – or perhaps because of it – several important pocket watches have sold well in the last two years. Amongst the recent highlights is one of the oldest watches known, the 369-year old Cremsdorff preserved in mint condition, and the 20th century masterpiece by George Daniels.

The majority of those came from the massive collection put together by the late Erivan Haub, a supermarket tycoon who was perhaps the most important collector of pocket watches in his day. Sotheby’s upcoming London auction, however, has a handful of exceptionally important pocket watches from a more illustrious collection, The Museum for Islamic Art, an institution in Jerusalem better known as the L.A. Mayer Museum for Islamic Art.

Because the museum was established by Sir David Lionel Salomons (1851-1925), a British inventor and businessman who put together the world’s largest collection of Breguet timepieces, its collection includes a magnificent selection of watches, including the legendary Marie Antoinette pocket watch no. 160 (which was famously stolen and then recovered).

Some of its collection, ranging from Islamic art to watches, will be sold at Sotheby’s in London, with the timepieces going under the hammer on October 28, 2020.

“We have been careful to select for sale works which, for the most part, are either duplicated in the collection or were held in storage,” says museum chairman Herbert Winter. “Their sale will not only secure the future of the museum, but will allow us to maintain and display our wonderful collection in an appropriate manner, and – importantly – it will allow us to expand on the educational community projects which align so closely both with our founding mission and with our future vision.” 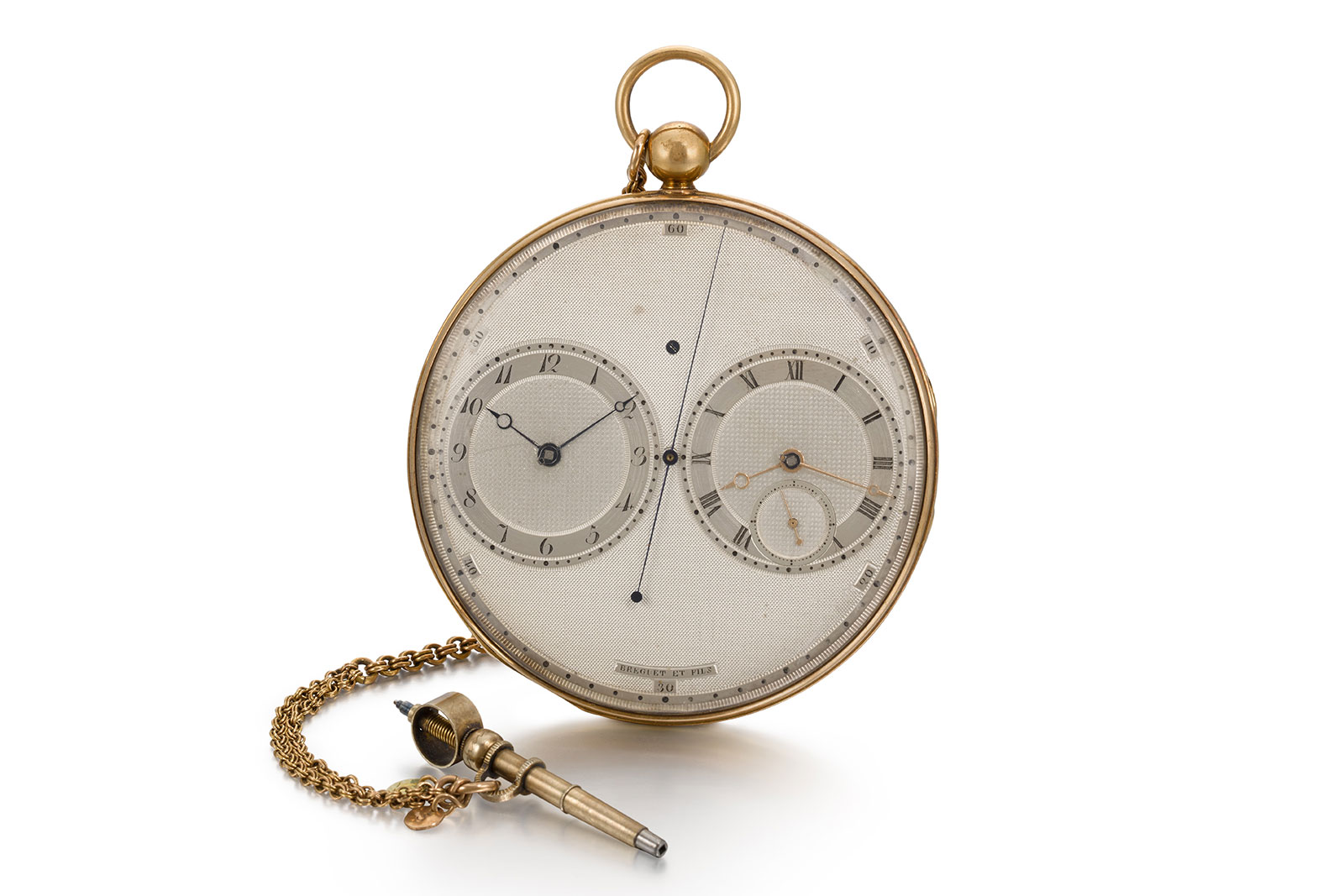 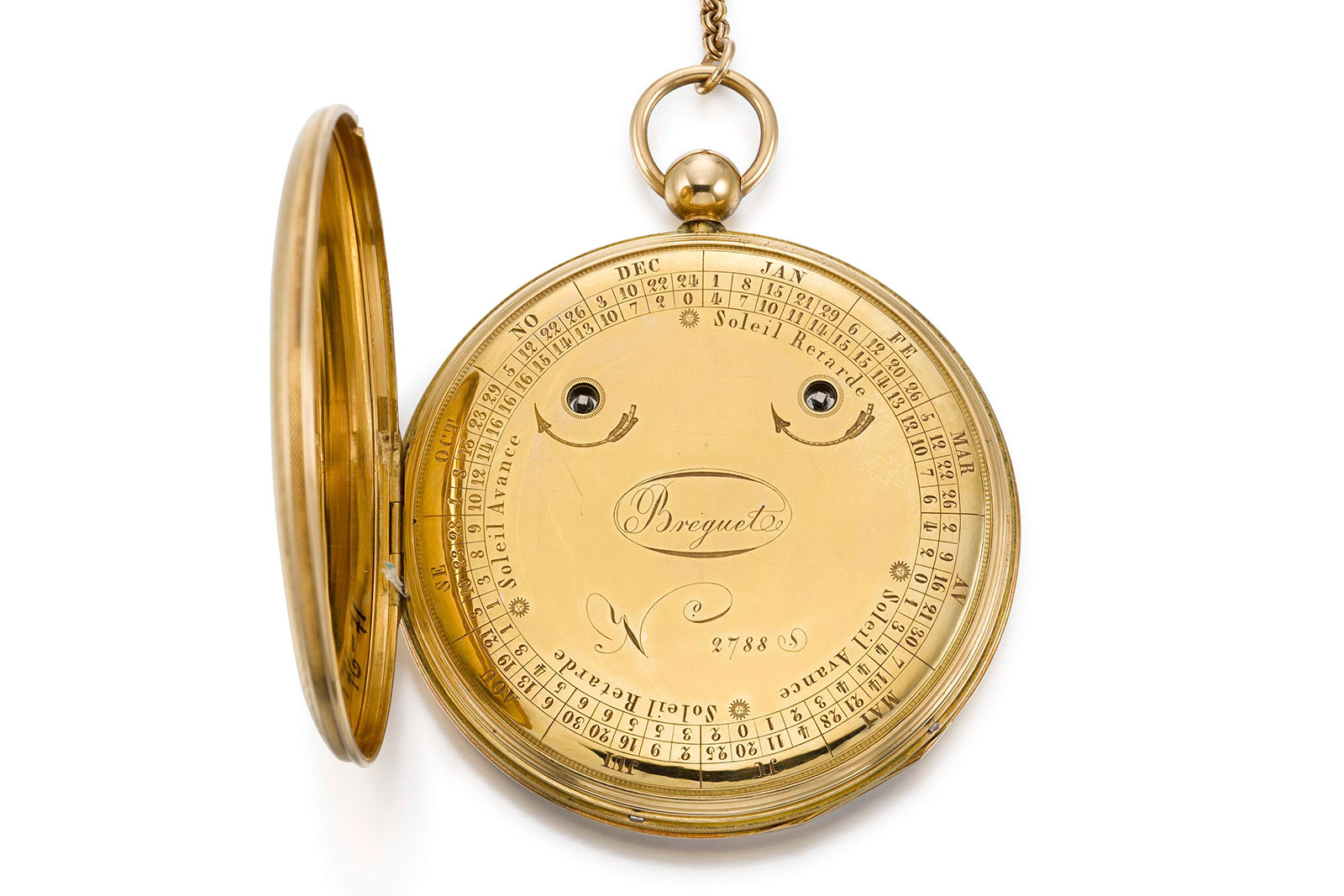 The inner case back of no. 2788 featuring an equation of time chart

Equipped with two balance wheels mounted so close they almost touch – bringing to mind the modern-day F.P. Journe Resonance that no doubt took inspiration from this – the movement was conceived to keep better time as a result of resonance occurring between the two balance wheels. 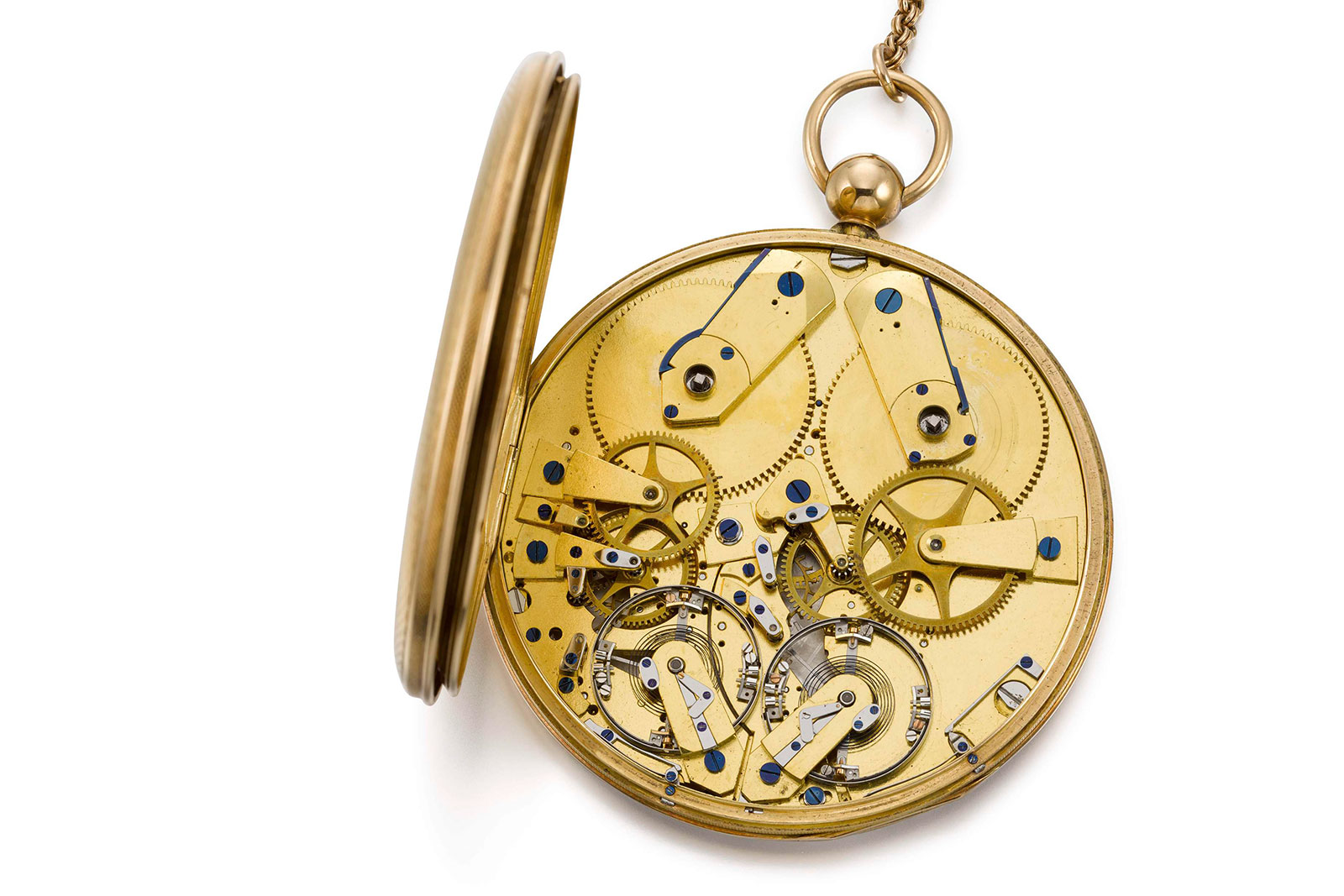 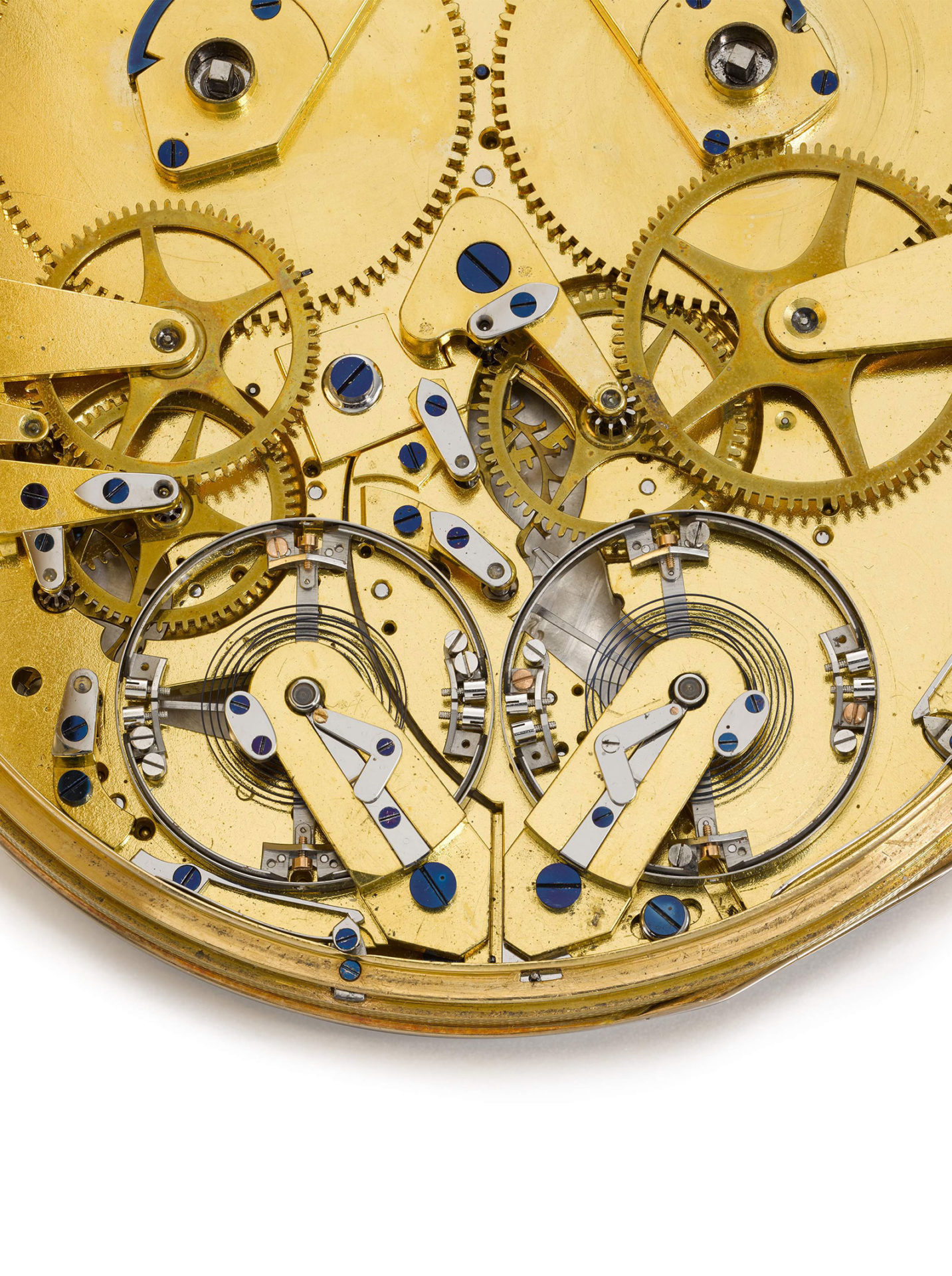 The application of the idea was likely unsuccessful, as Breguet only produced a tiny number of such watches, with just three known today.

Another notable Breguet in the sale is the Breguet no. 148 “Duc de Praslin”, the Perpétuelle once owned by the French nobleman who owned several Breguet watches. Incorporating both Breguet’s automatic-winding mechanism – hence perpétuelle – as well as a minute repeater, the watch also features a chronometer escapement. It has an estimate of £250,000-350,000, or about US$320,000-450,000. 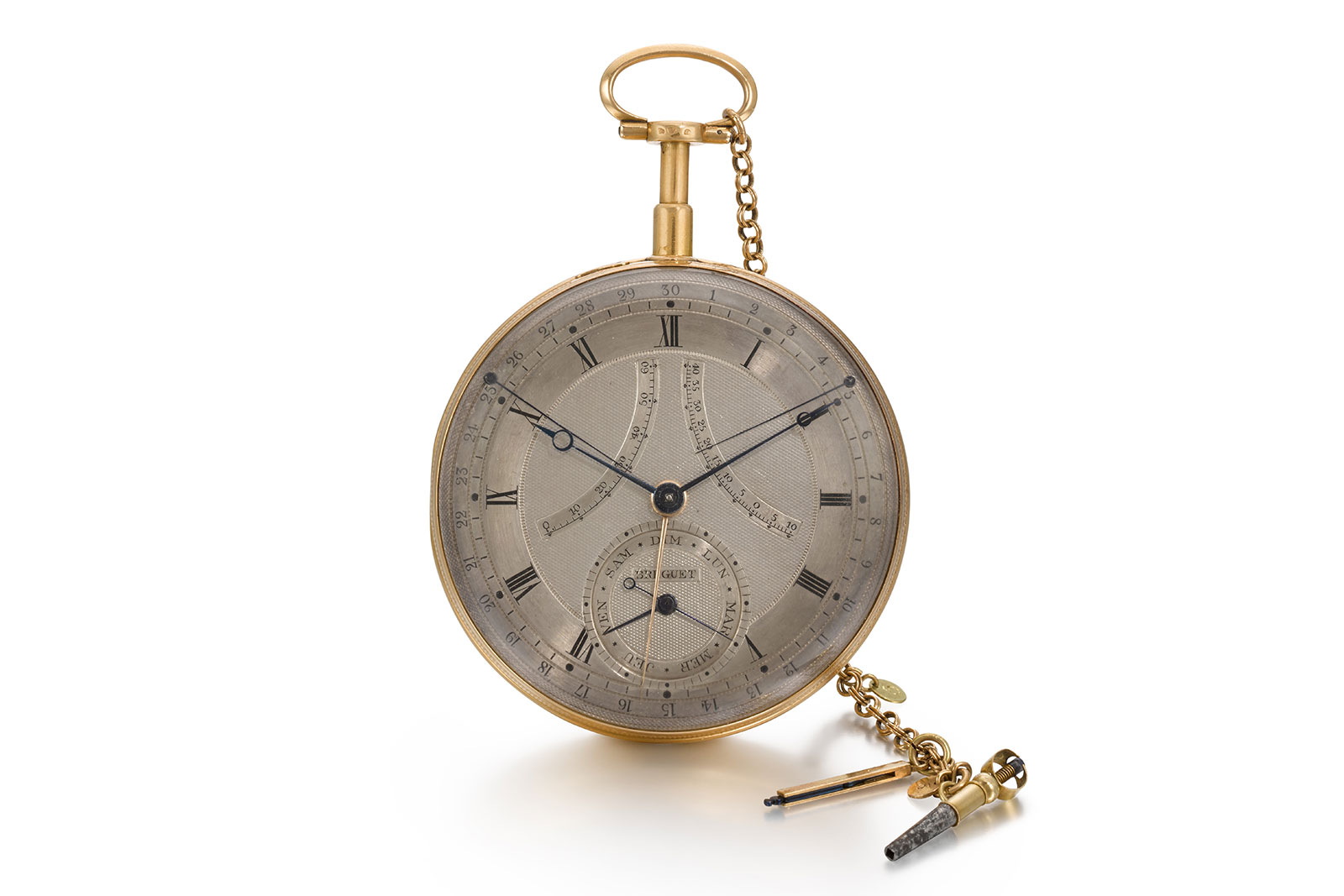 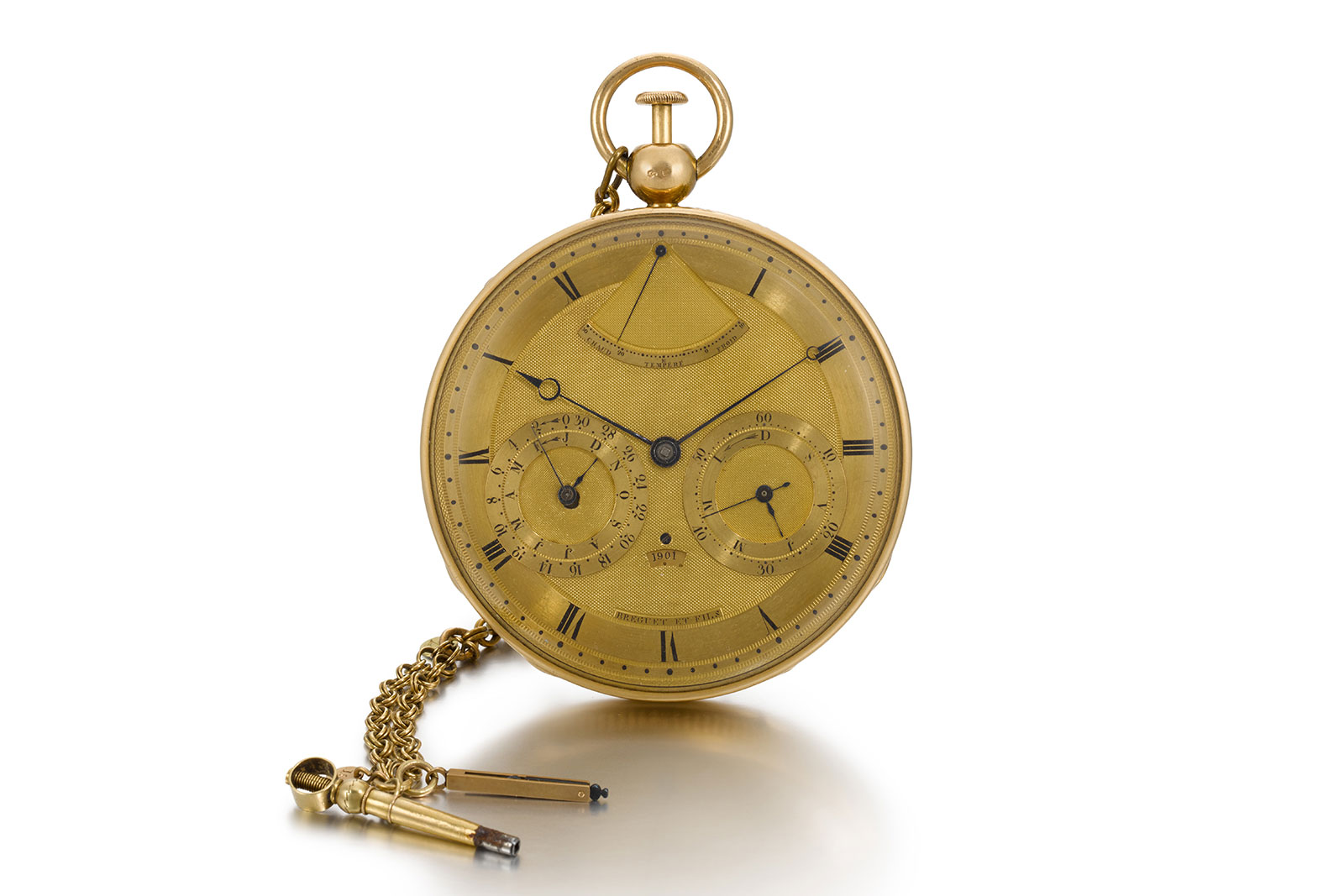 One of the most enthusiastic clients of Breguet, the Princess bought some three dozen timepieces from the watchmaker, including an early jewellery watch designed to be worn on the wrist. That long-lost wristwatch is the inspiration for the modern day Reine de Naples, named after the princess, whose husband was Joachim Murat, King of Naples.

The watches will be sold at the Watches auction taking place in London on October 28, 2020 at Sotheby’s located at 34-35 New Bond Street.

Correction September 16, 2020: The inside case back of the no. 2788 is an equation of time chart, and not an annual calendar.

Update October 27, 2020: The sale of watches from The Museum for Islamic Art will be postponed until sometime in November 2020, due to the museum having decided to rethink the deaccessioning of part of its collection.