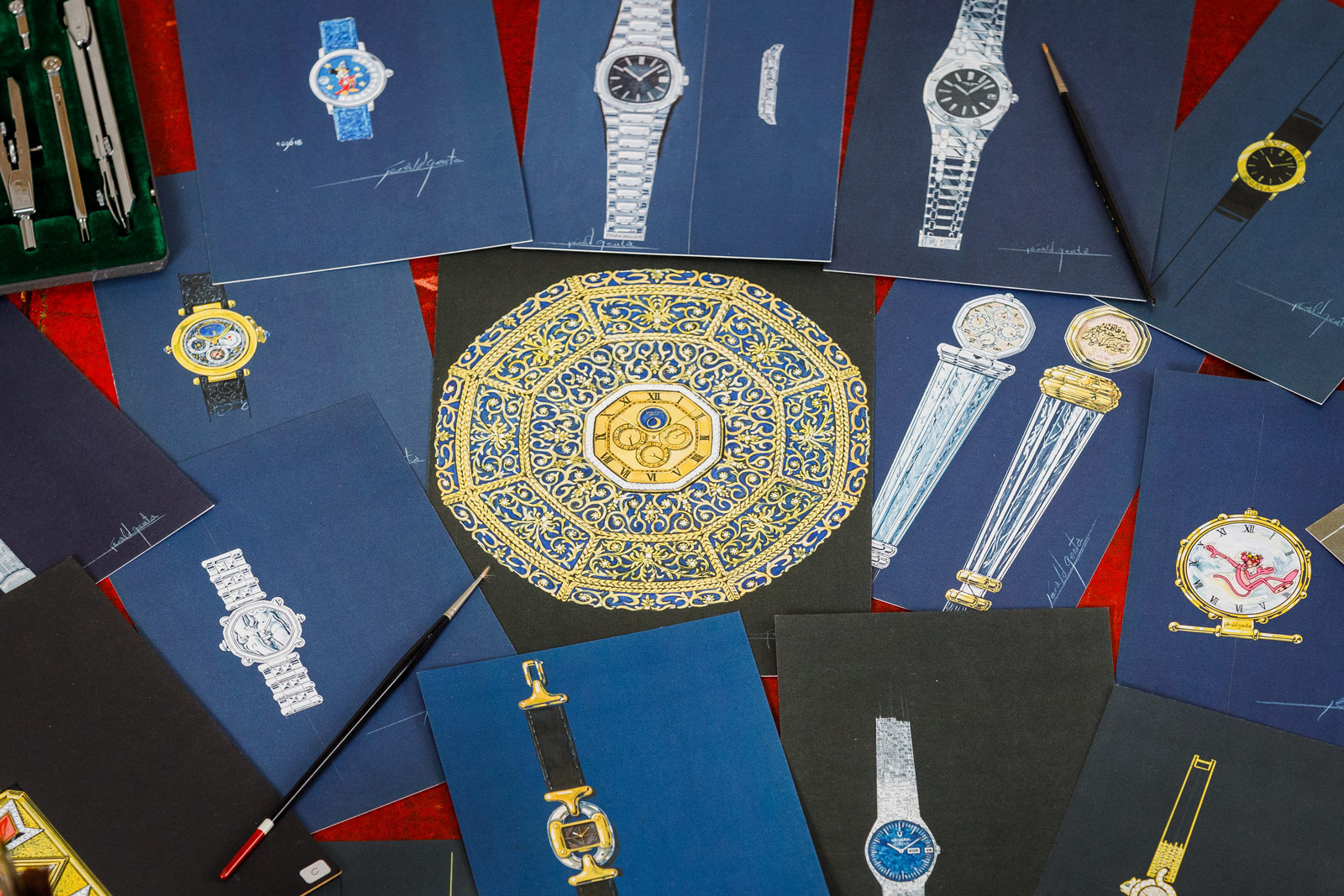 A watch designer whose talent lives on in his work, the late Gérald Genta was exceptionally prolific – he claimed to have penned over 100,000 creations. His family still possesses some 3,400 original sketches covering a bewildering diversity of timepieces. From that, a hundred sketches have been curated to form Gérald Genta: Icon of Time, a series of four thematic auctions staged by Sotheby’s in the first half of the year.

The brainchild of Genta’s wife, Evelyne, the auctions will offer original sketches of his best known creations, including the Royal Oak, Nautilus, and Disney Fantasy watches – each accompanied by a non-fungible token (NFT). 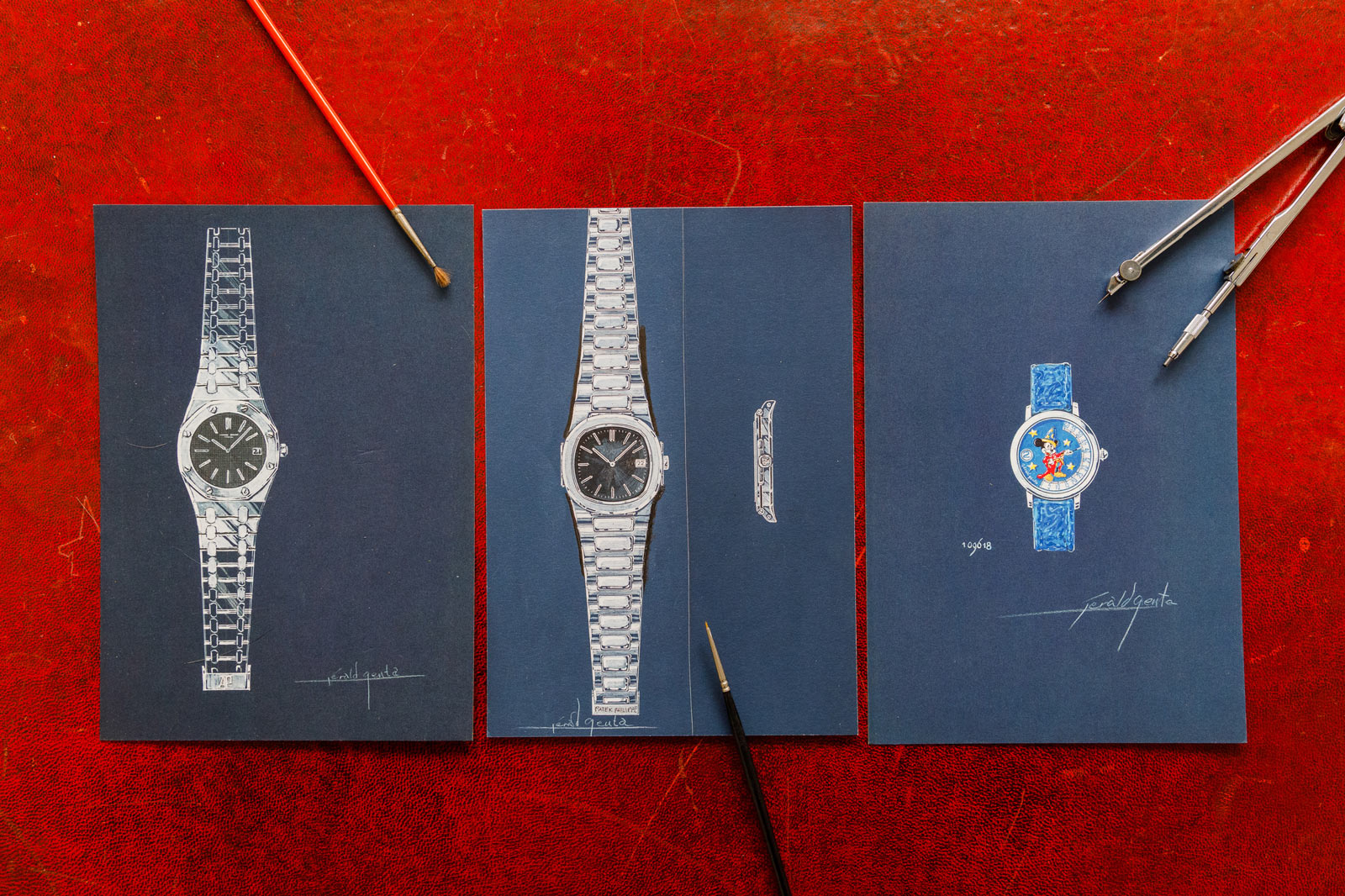 Three of Genta’s best known designs. Notably, the illustration of the Nautilus includes its case profile, unlike most of his sketches that depict only the front of the watch

Essentially digital representations of the sketches, the NFTs “serve as a record of ownership and proof of provenance for each design, ensuring the value of each physical artwork is intrinsically connected to its digital counterpart which cannot be resold without the NFT that attests to the legitimacy of the piece” according to Sotheby’s.

And these original works will be affordable, with each sketch and its NFT starting at just US$100, CHF100, or HK$1,000, depending on the sale location.

But the highlight of the event is an actual watch – Genta’s own personal Royal Oak.  Slated to be sold at the final instalment of the event taking place in Geneva in May 2022, just in time for the 50th anniversary of the Royal Oak, Genta’s watch is a unique example in steel with an 18k yellow gold bezel. It has an estimate of CHF300,000-500,000. 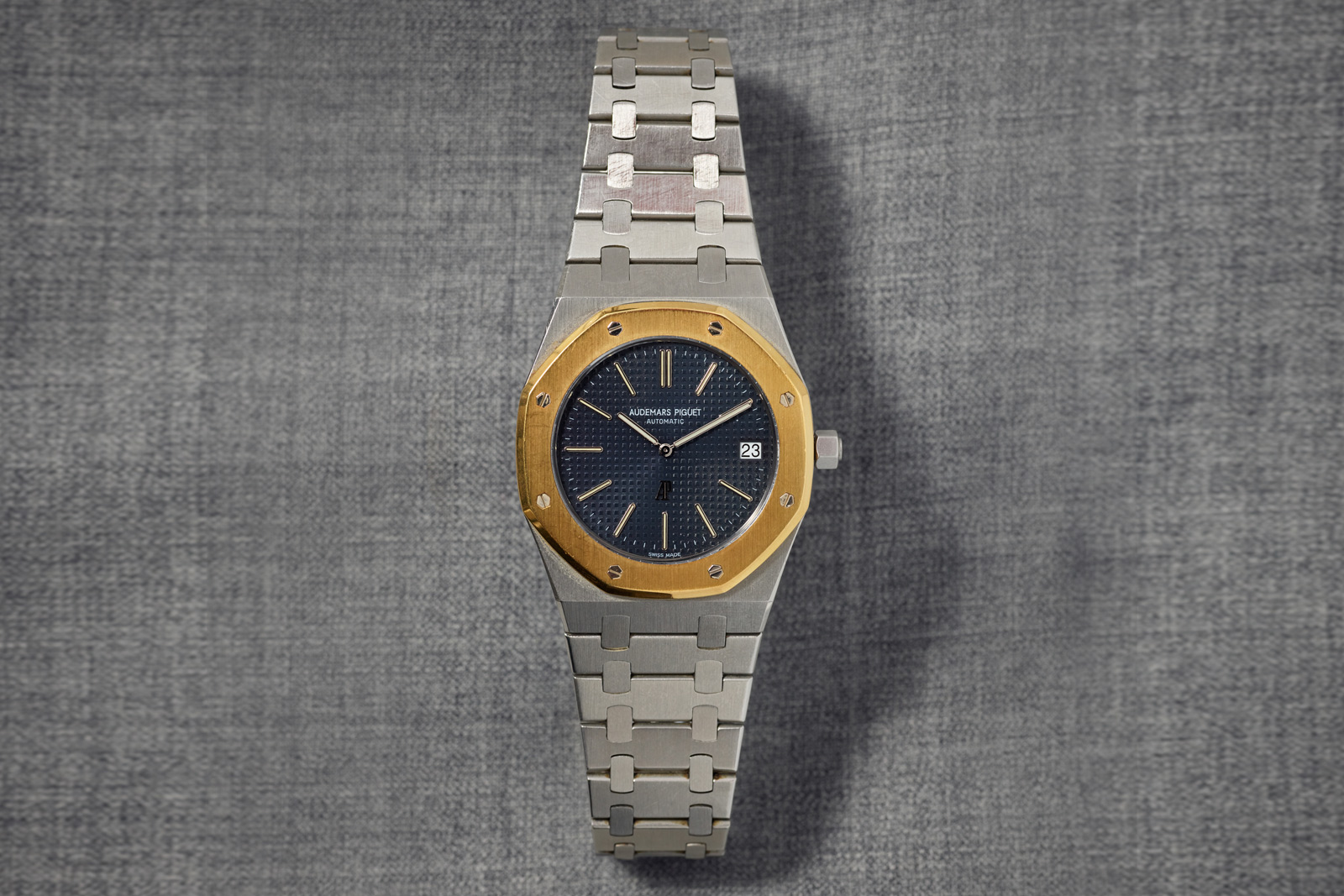 The drawings on offer include unique timepieces commissioned by prominent personalities, royalty, as well as established watch brands. While the designs are varied and fascinating, they are typical of Genta, who relied on geometric shapes ornamented by flamboyant details, especially during his later career.

Notably, some sketches are hitherto unseen. Most intriguing is an early draft for the Royal Oak, which shares the characteristic angular bezel – but with few sides – yet is an entirely different watch. 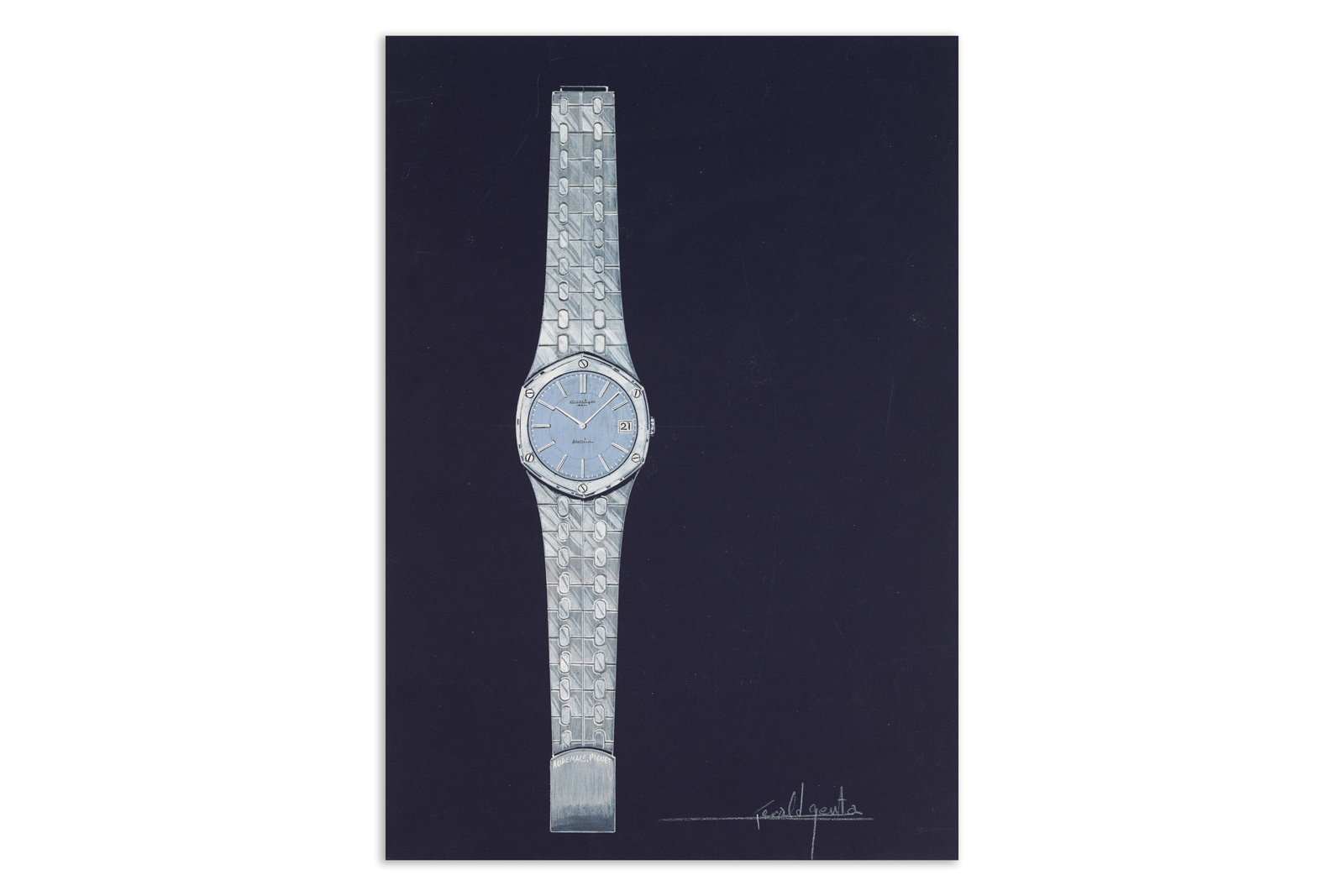 A version of the Royal Oak that never came to life 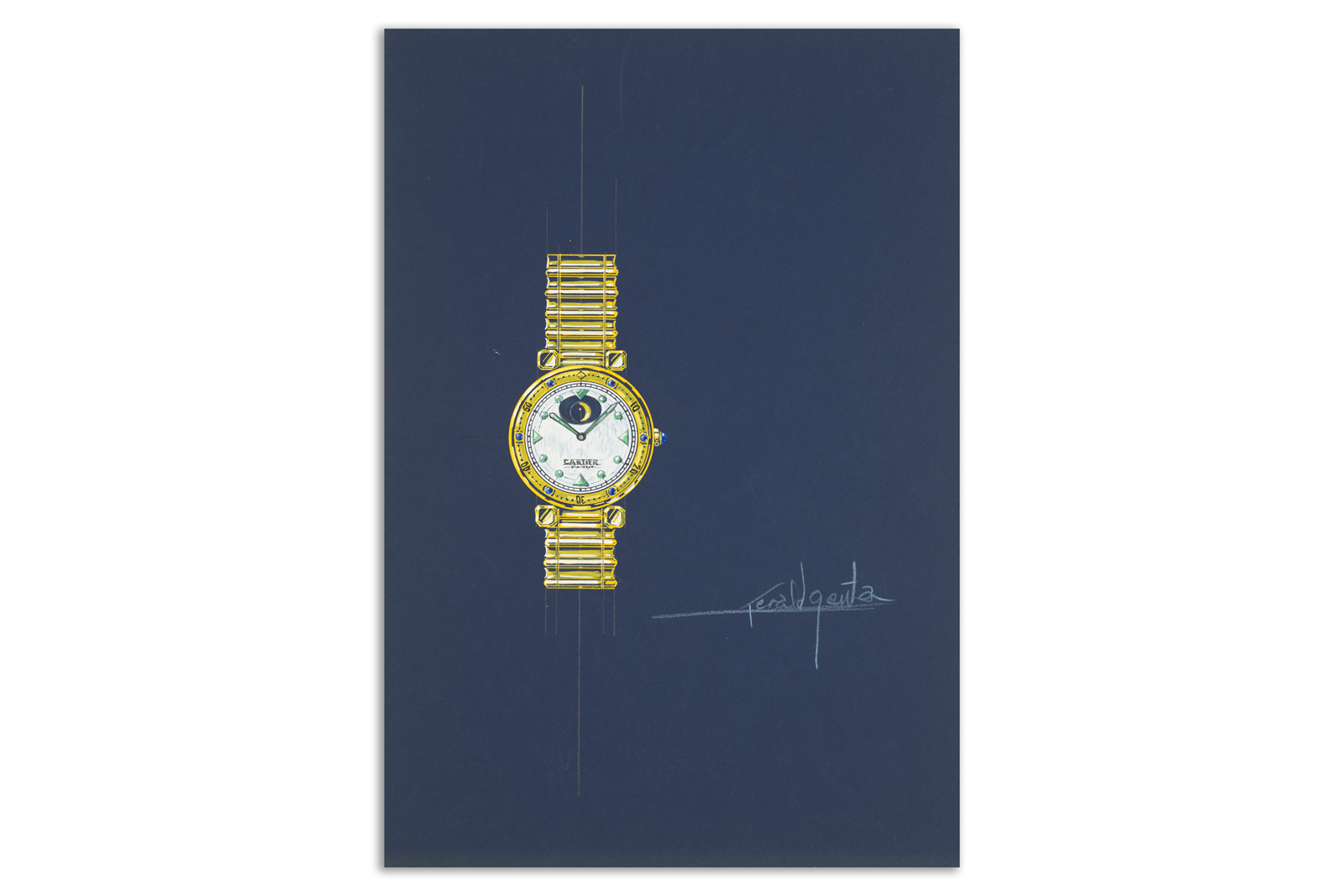 And a sketch for the Pasha that was never submitted to Cartier, instead Genta created the design with a cap over the crown that’s now the best known version of the model

Among the most extravagant creations were those for sovereigns and royalty of the Middle East. Interestingly, his sketches for these commissions often hark back to his origins as a jewellery designer – before he pivoted to specialising in watch design after realising most of his clients wanted ideas for watches rather than baubles. 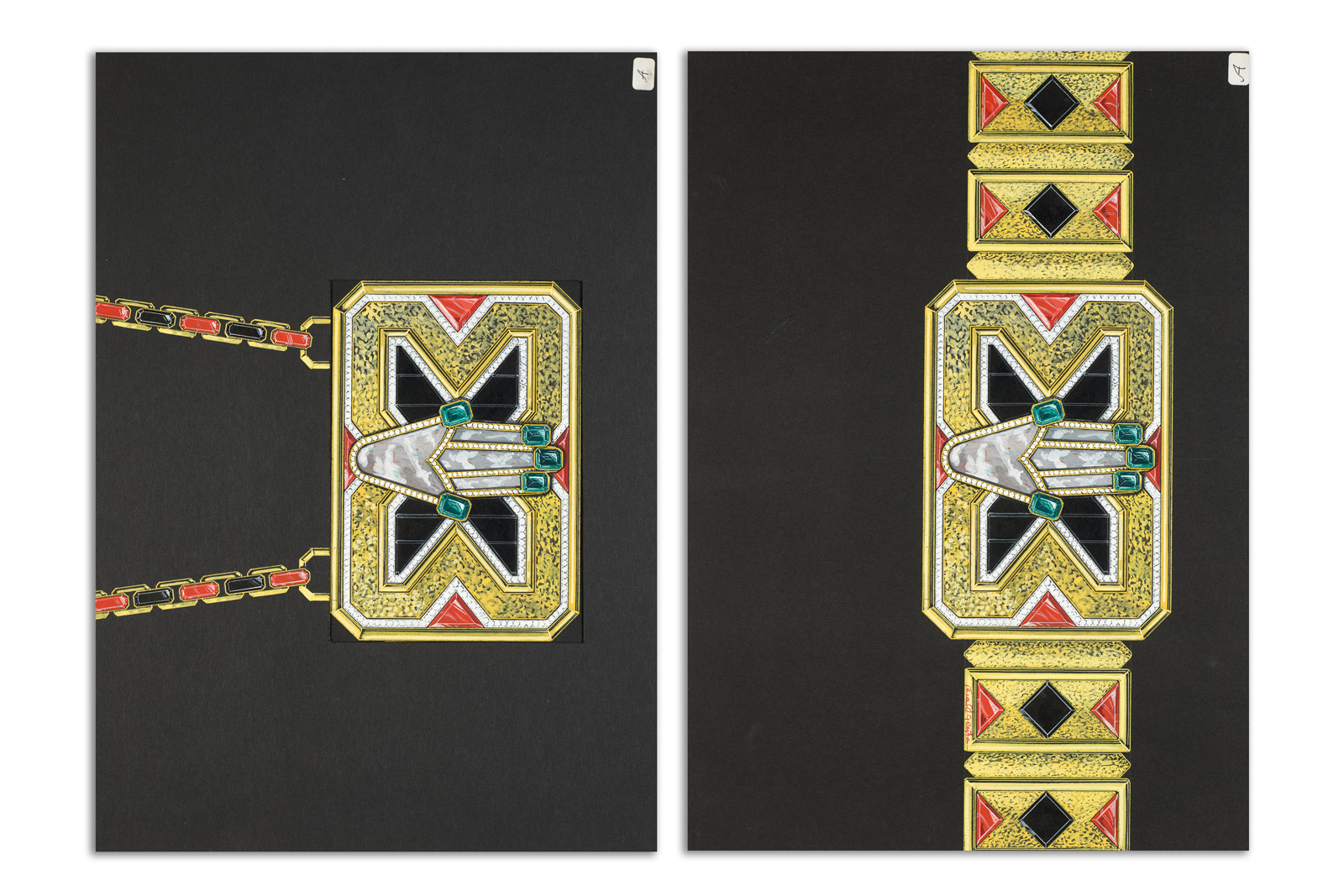 A belt and pendant set with green emeralds on the hamsa, or palm-shaped emblem, which was commissioned by a Middle Eastern head of state as a gift to a European leader 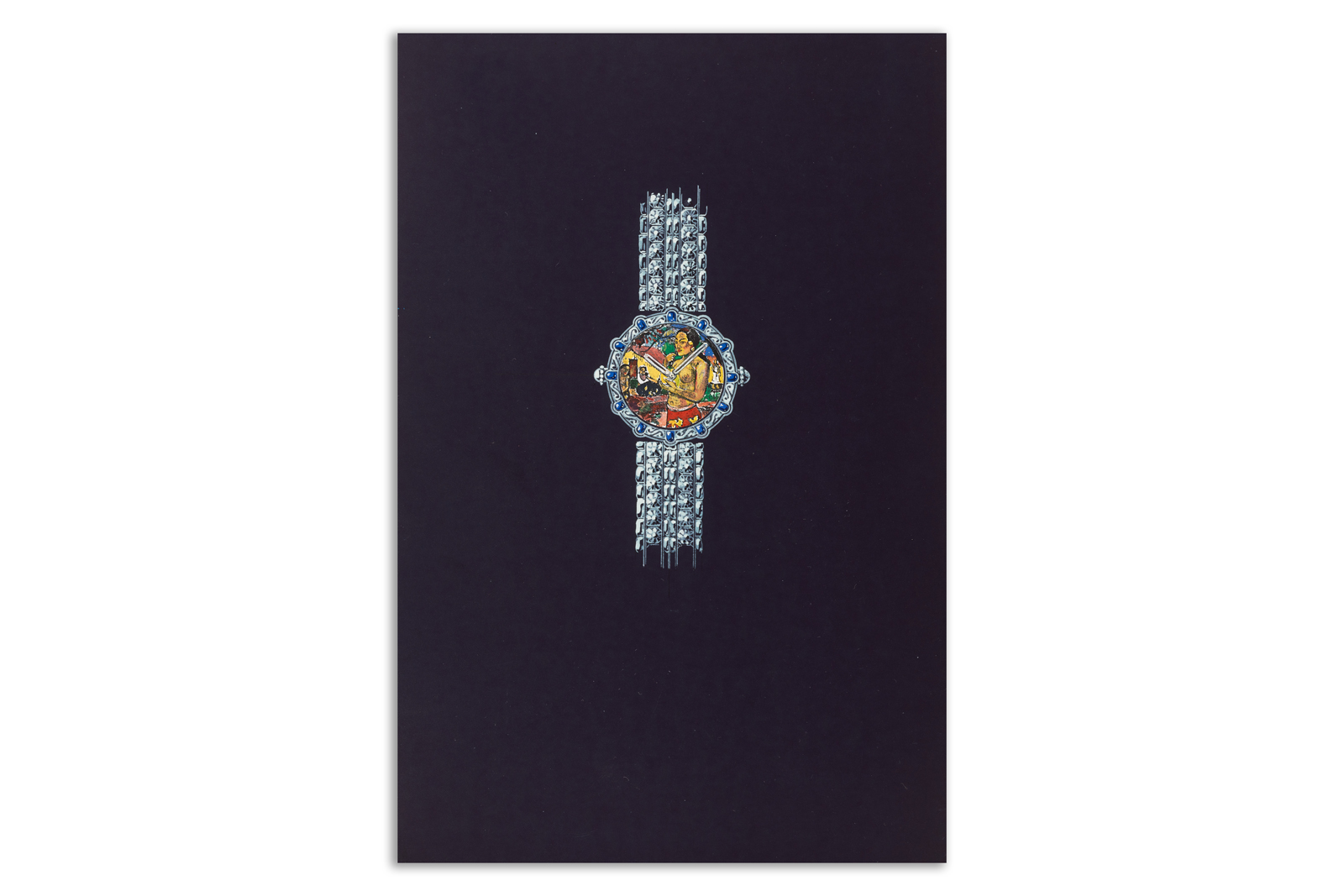 Another commission from the Middle East, this one with a miniature painting of the Paul Gauguin’s Eü haere ia oe (which translates as “Woman Holding a Fruit”). This was a one of a series of minute repeaters, each featuring a favourite painting of the gentleman who commissioned them 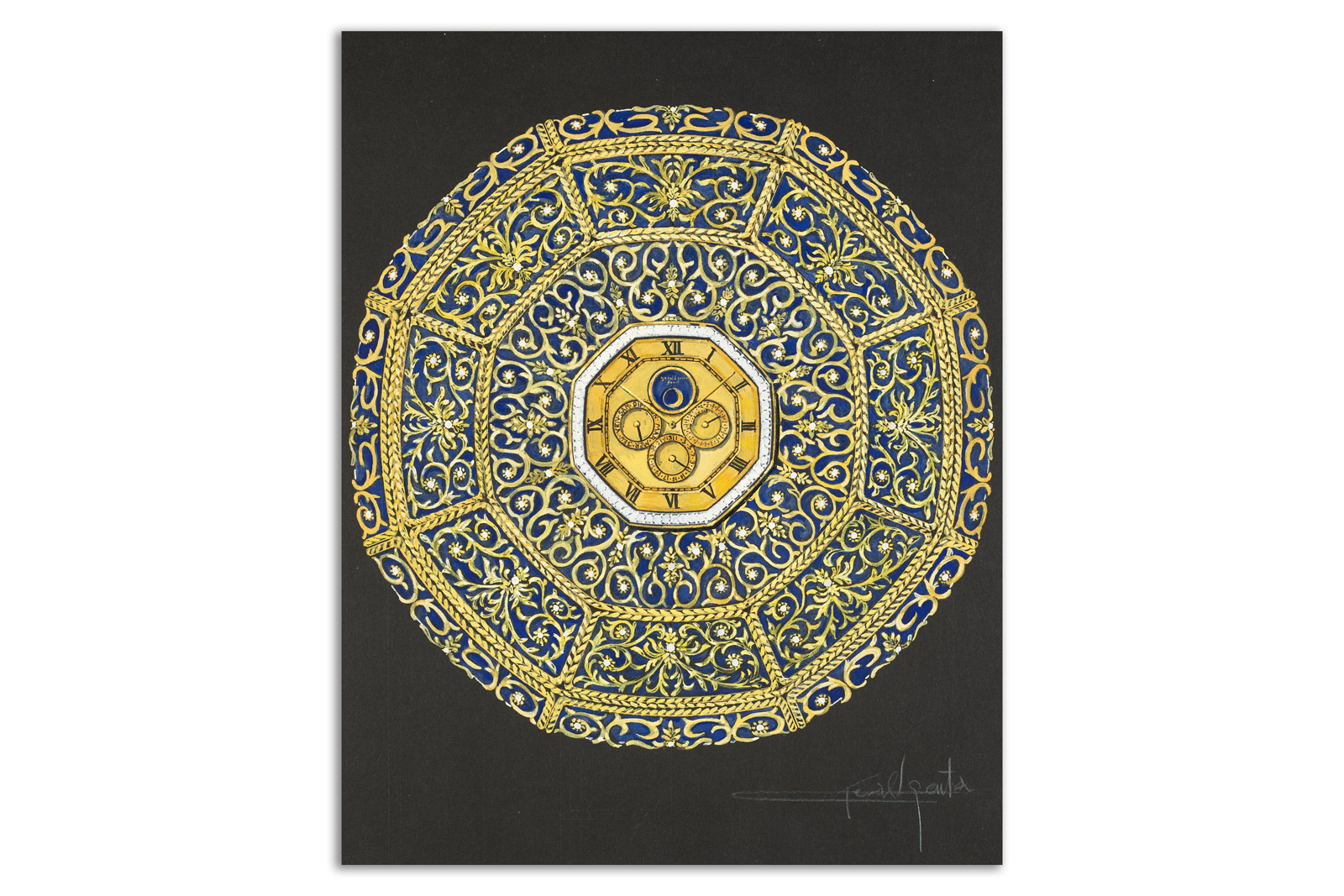 While most of Genta’s best known works were produced for watch brands in his early career, he later set up his eponymous brand in 1969, which designed and prototyped wristwatches, and later developed its own complicated movements.

In fact, the all-star team he recruited for his own brand developed several world-firsts, including what was then the thinnest minute repeater wristwatch ever in 1981.

But the highlight of the Gerald Genta brand is no doubt the Grand Sonnerie, which was the most complicated wristwatch in the world at the time. Combining a grande et petite sonnerie with Westminster carillon, perpetual calendar, tourbillon, and even automatic winding, the Grand Sonnerie was also one of the first ever wristwatches to boast a grande et petite sonnerie, having arrived just three years after Philippe Dufour debuted the first. 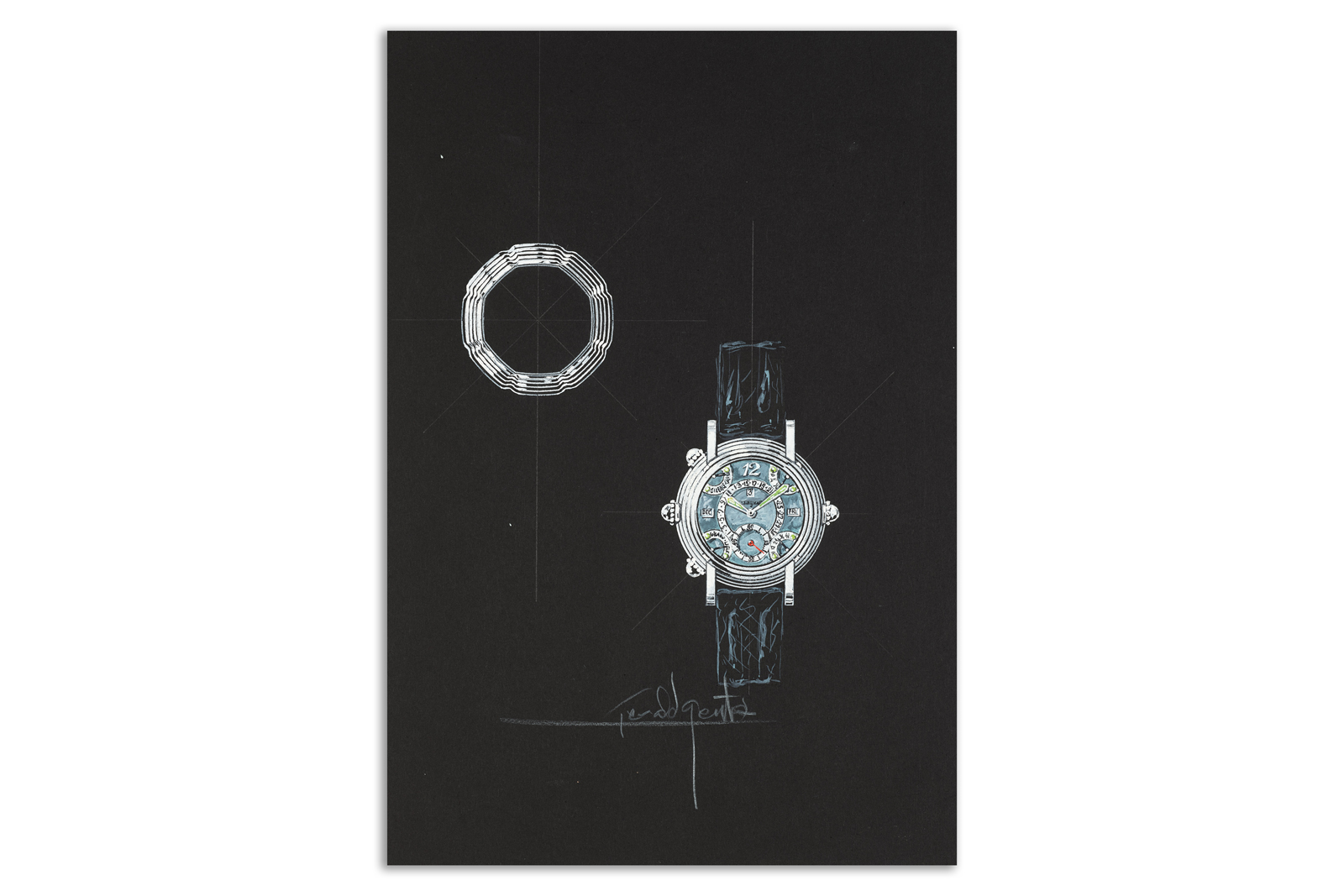 A sketch for one version of the mega-complicated Grand Sonnerie

And Genta’s innovative streak went beyond aesthetics. His was one of the first brands to debut a wristwatch with a bronze case, when he unveiled the Gefica in 1984. The choice of material was practical rather than stylistic, as the watch had been conceived for friends of his who were enthusiastic hunters and wanted a low-key wristwatch that didn’t reflect sunlight. 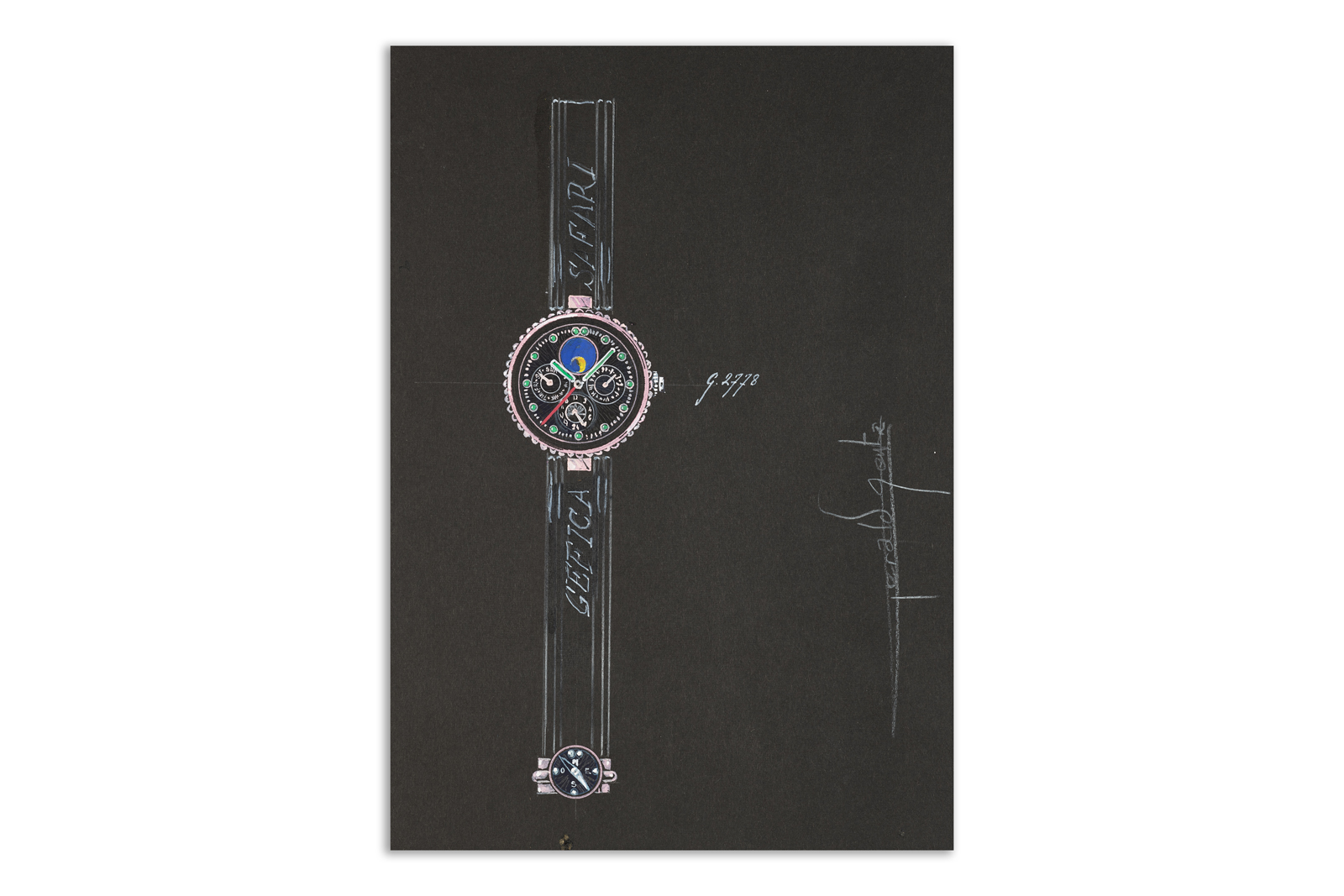 Geneva, February 10-24, 2022
Featuring sketches for the Royal Oak, including the unreleased and hitherto unknown first draft

Hong Kong, March 10-24, 2022
Original sketches for the Nautilus and three drawings for the Grand Sonnerie

New York, April 13-27, 2022
Including sketches for a range of Disney Fantasy watches and clocks

Geneva, May 2022
Headlined by Genta’s own Royal Oak wristwatch in steel with an 18k gold bezel, and including oil paintings by Genta inspired by the Nautilus and Royal Oak