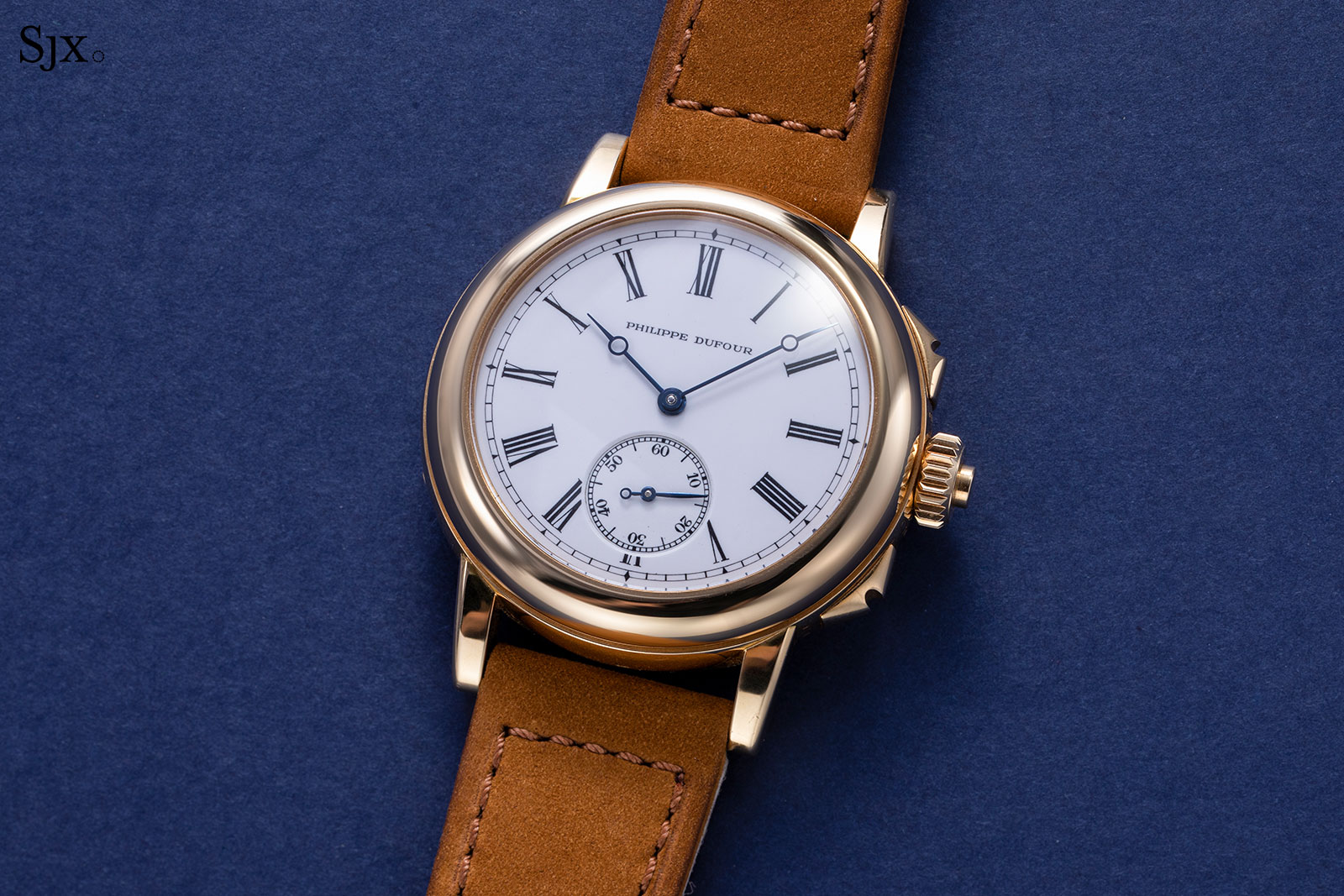 Widely regarded as important, the Philippe Dufour Grande Sonnerie wristwatch was a landmark when it was unveiled in 1992. The first wristwatch to incorporate a grande et petite sonnerie, widely regarded as the pinnacle of complications, the Grande Sonnerie is indeed a feat of miniaturisation, construction, and finishing. And now the very first example is slated to go under the hammer at Phillips’ upcoming Geneva auction.

Originally conceived as a homage of early 20th century Swiss watchmaking – the very sort of watches Mr Dufour worked on early in his career – the Grande Sonnerie revered today for many reasons, but it really is all about two accomplishments. 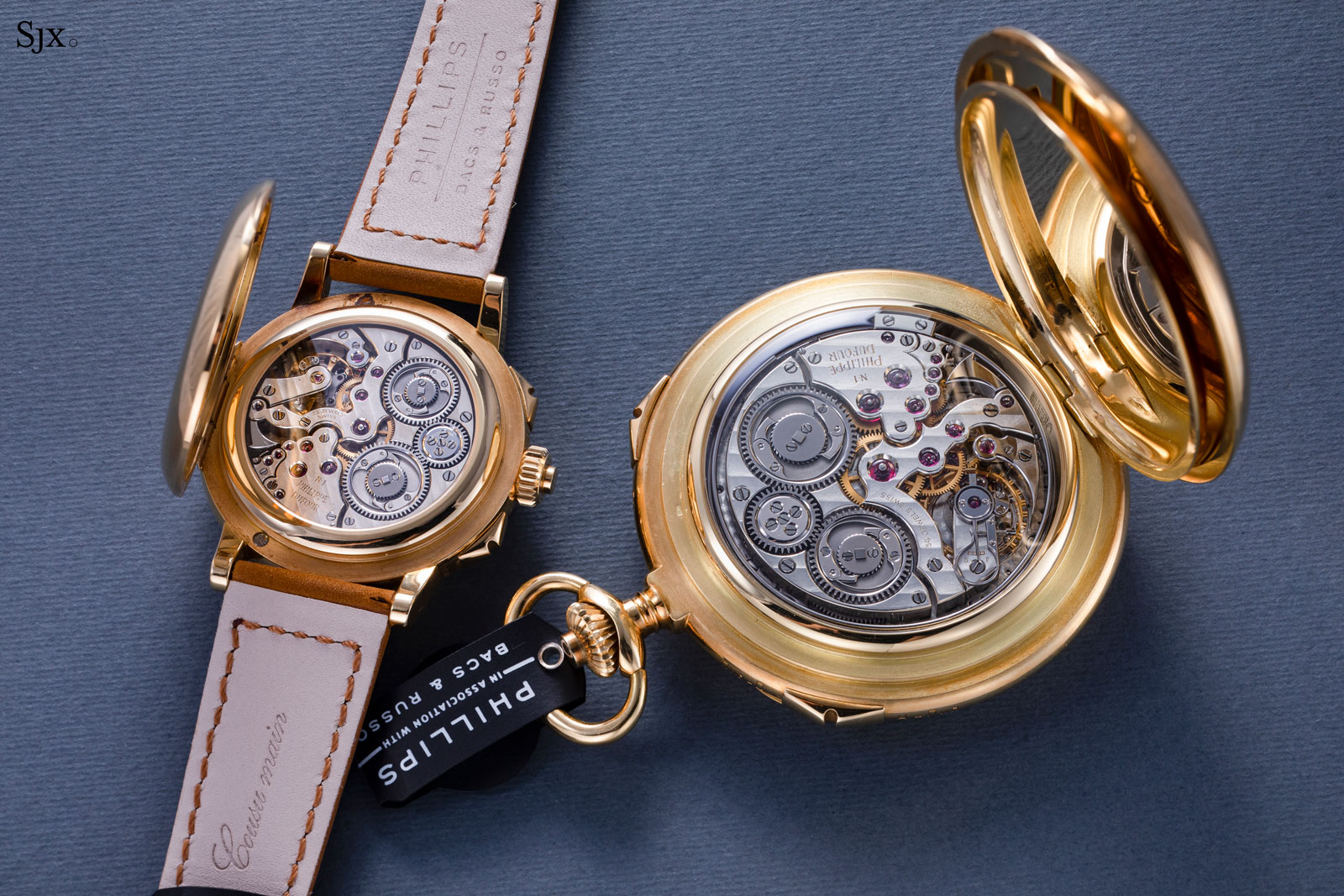 The wristwatch (left), and its pocket watch counterpart

One is miniaturisation – this was the first ever wristwatch grande sonnerie. Prior examples were all pocket watches and correspondingly large.

And the second, arguably more important quality, is its movement finishing. Mr Dufour decorated each component of the movement exceedingly well. So well, in fact, that this is arguably better finished than even the finest examples of grande sonnerie pocket watches made by brands like Patek Philippe. 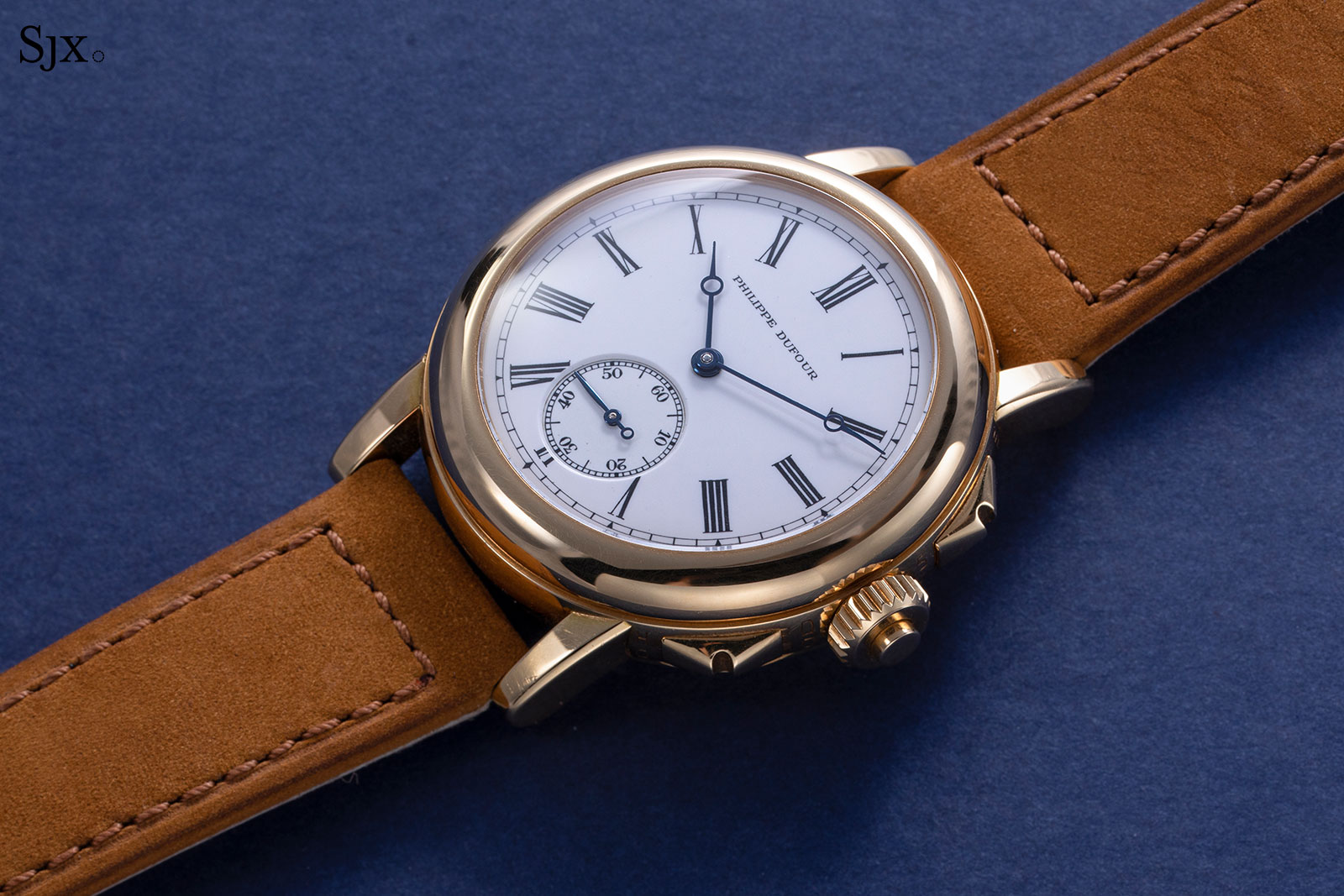 The Grande Sonnerie is almost a pocket watch with lugs, not merely by virtue of its size, but also its aesthetic, especially on the front. It’s an impression reinforced by the proportions of bezel-to-dial, domed bezel, and an enamel dial that that looks like it came straight out of a pocket watch. 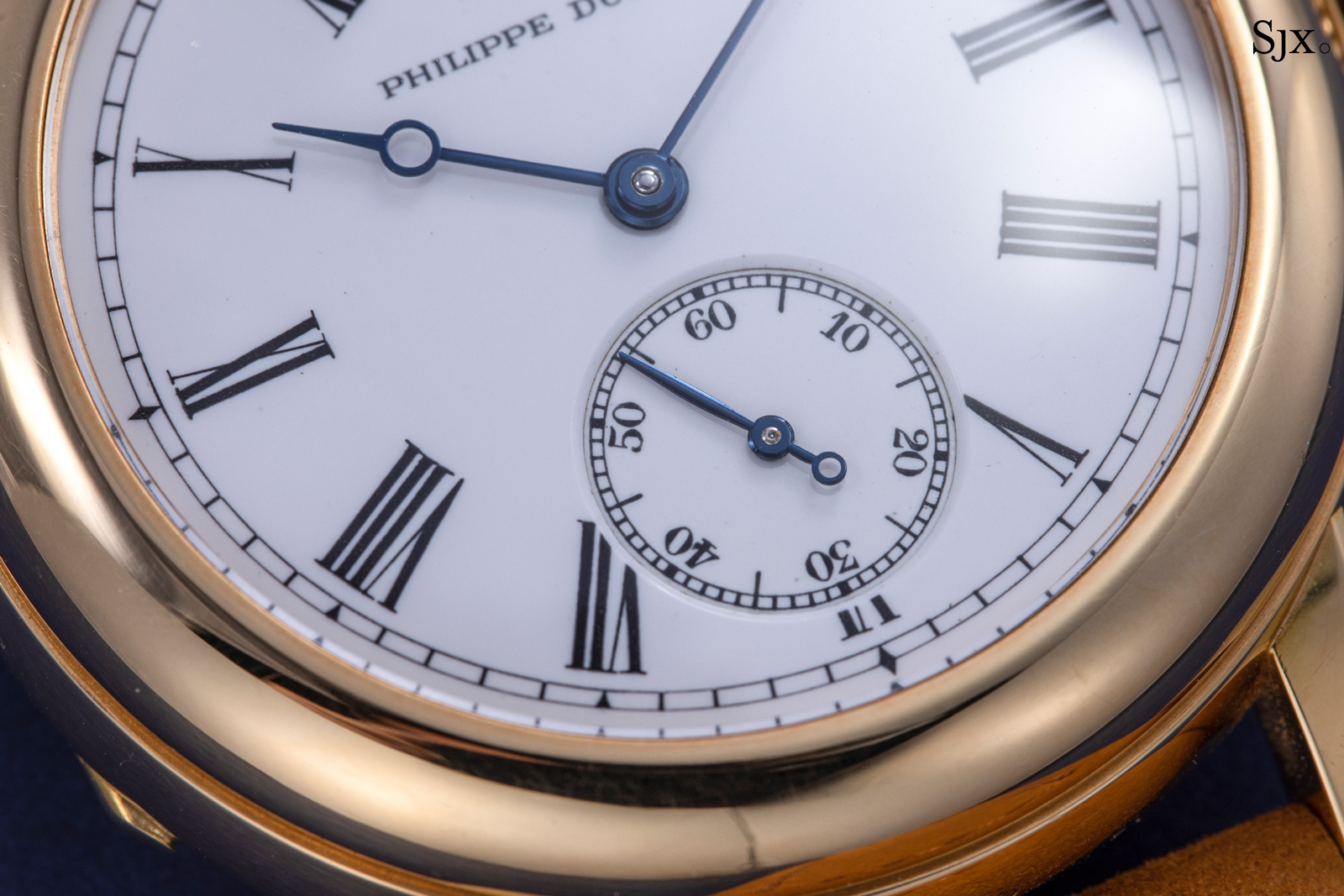 But the Grande Sonnerie is all about the movement, which is magnificent in its complexity and decoration.

Unlike contemporary grande sonnerie movements that are clearly modern constructions – the recent Patek Philippe ref. 6301P is a good example – the calibre inside Mr Dufour’s grande sonnerie instantly evokes the finest Swiss-made clockwatch movements of the early 20th century. These were made by the likes of Louis Elisee Piguet, a movement maker Mr Dufour has spoken reverentially of during my conversations with him. 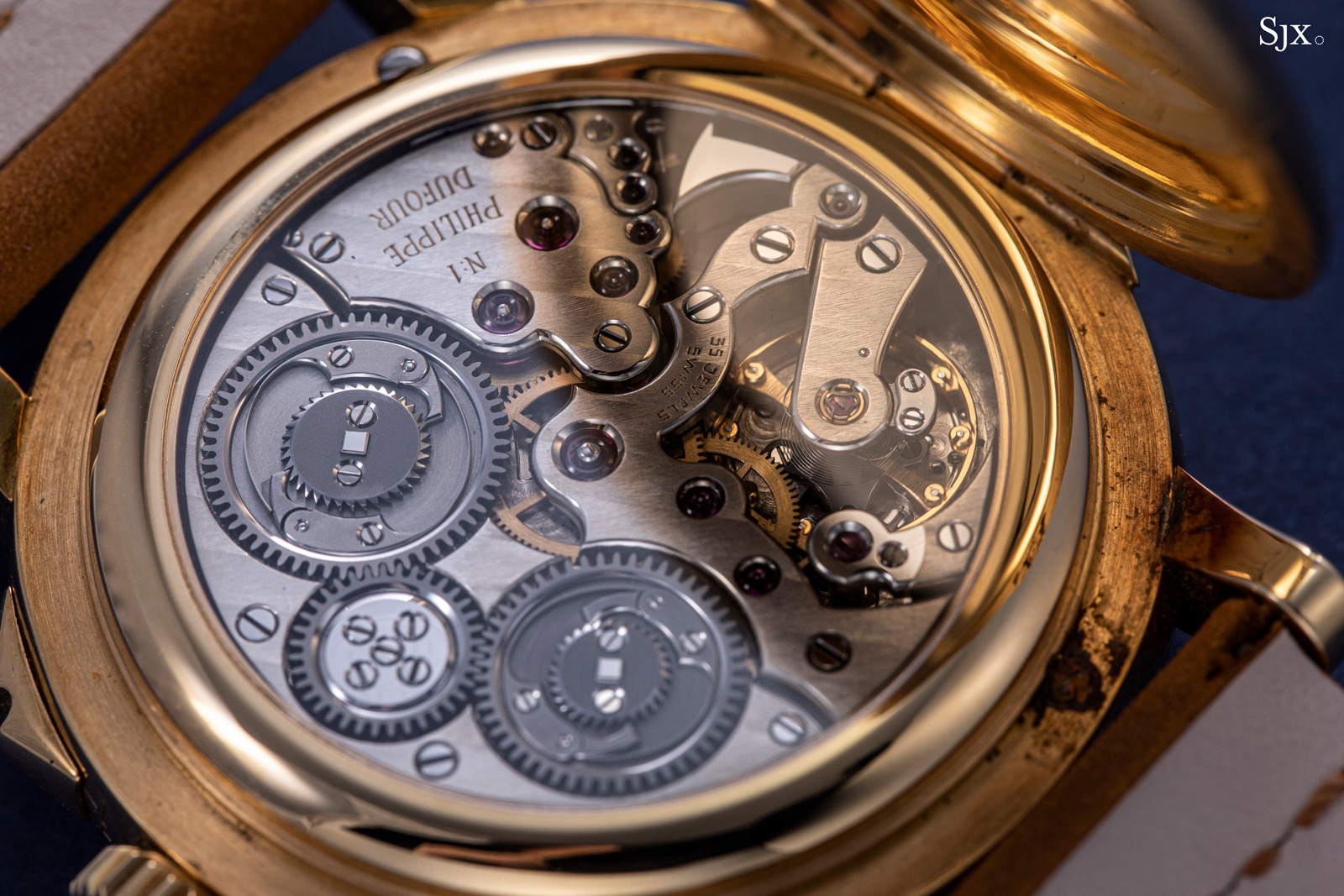 Mr Dufour no doubt took inspiration from such past works for his grande sonnerie, scaling down the mechanics and then finishing everything to the finest possible degree.

As a result, the Grande Sonnerie is perhaps more the final chapter of traditional, 20th century Swiss watchmaking – specifically of the Vallee de Joux variety – rather than being the opening act of 21st century independent watchmaking. 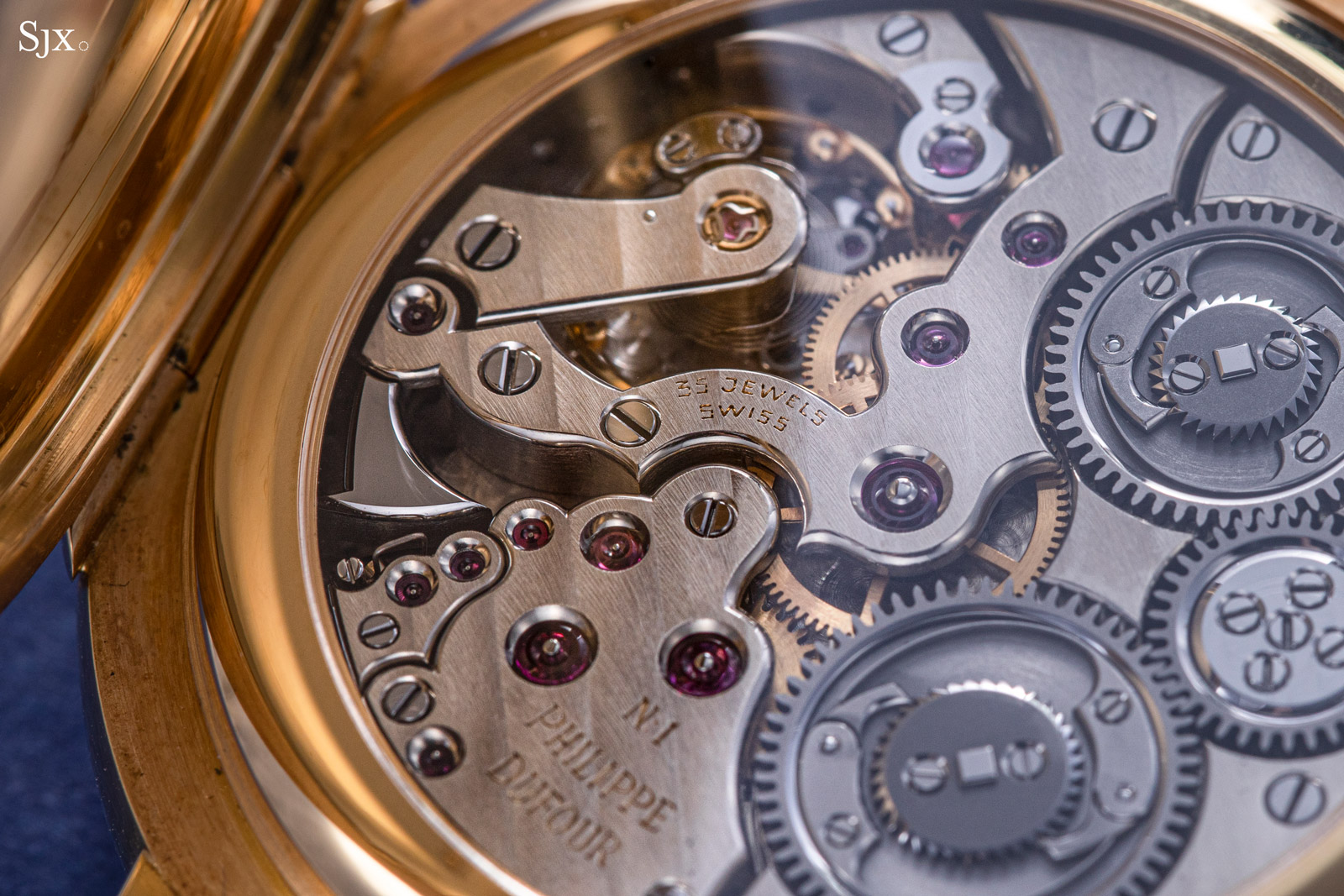 The Grande Sonnerie has a modest estimate of CHF1-2 million, which is equivalent to about US$1.1-2.2 million.

The Grande Sonnerie in rose gold was reportedly sold a few months ago for over US$7.6 million, but it was not a public transaction, so it is not a useful benchmark since there’s a lack of clarity on the price.

I expect the Grande Sonnerie no. 1 to finish in the region of US$4-5 million, though as with so many things today, it could climb higher. 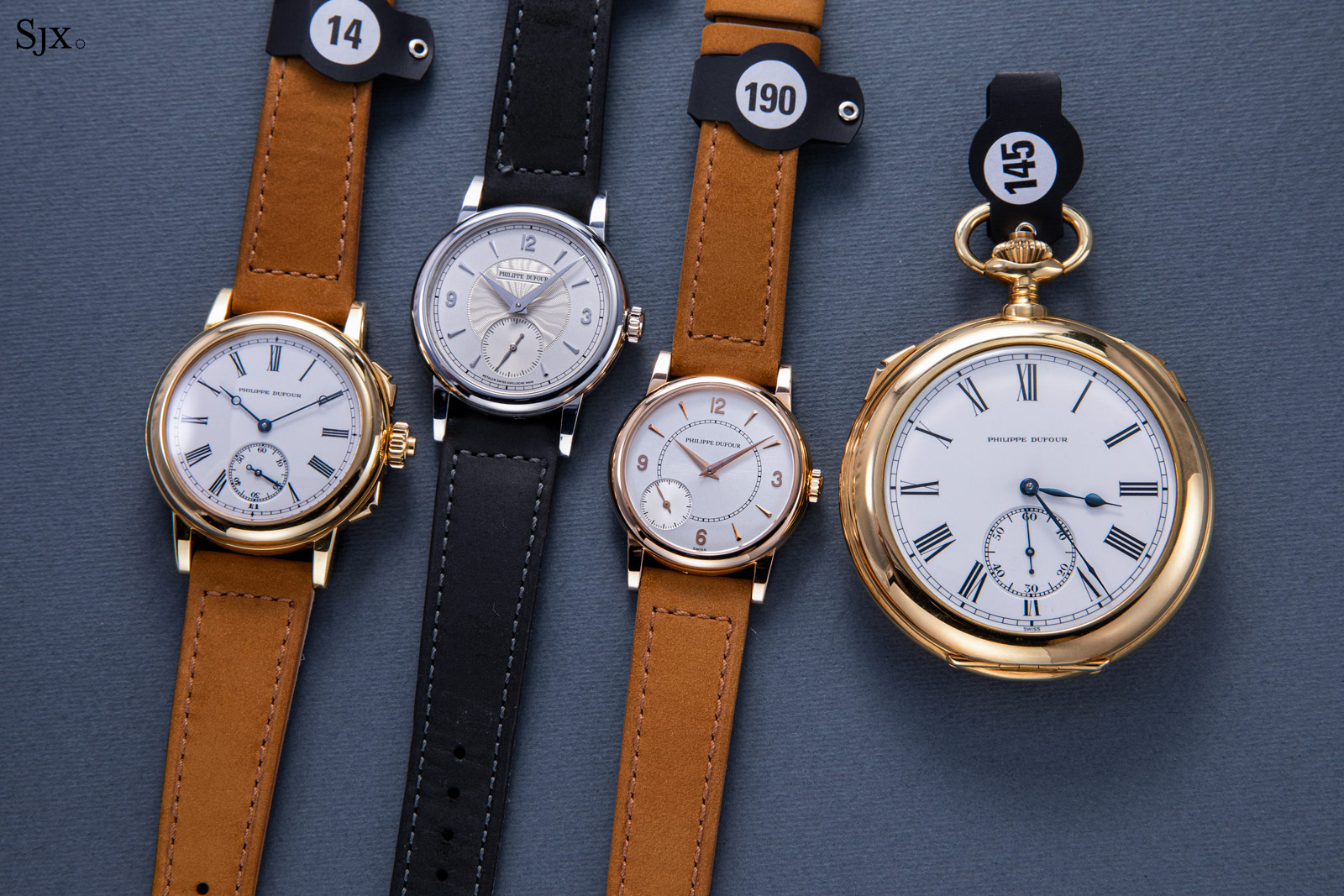 The quartet of Dufour watches at Phillips, all “no. 1”

One of a few

This is one of the four Grande Sonnerie wristwatches with a fired enamel dial, with the other three being identical in terms of the dial and movement, but differing in case metal. The remaining three have cases in pink gold, white gold, and platinum.

In 1999 Mr Dufour unveiled the Grande Sonnerie wristwatch with a clear sapphire dial that revealed the strike work. Two examples of the open-dial Grande Sonnerie were made at that time – one each in white and pink gold – and Mr Dufour subsequently finished two more over a decade later.

The Grande Sonnerie case is simple in form: a wide, domed bezel, slightly tapered lugs, and a hinged, hunter case back. 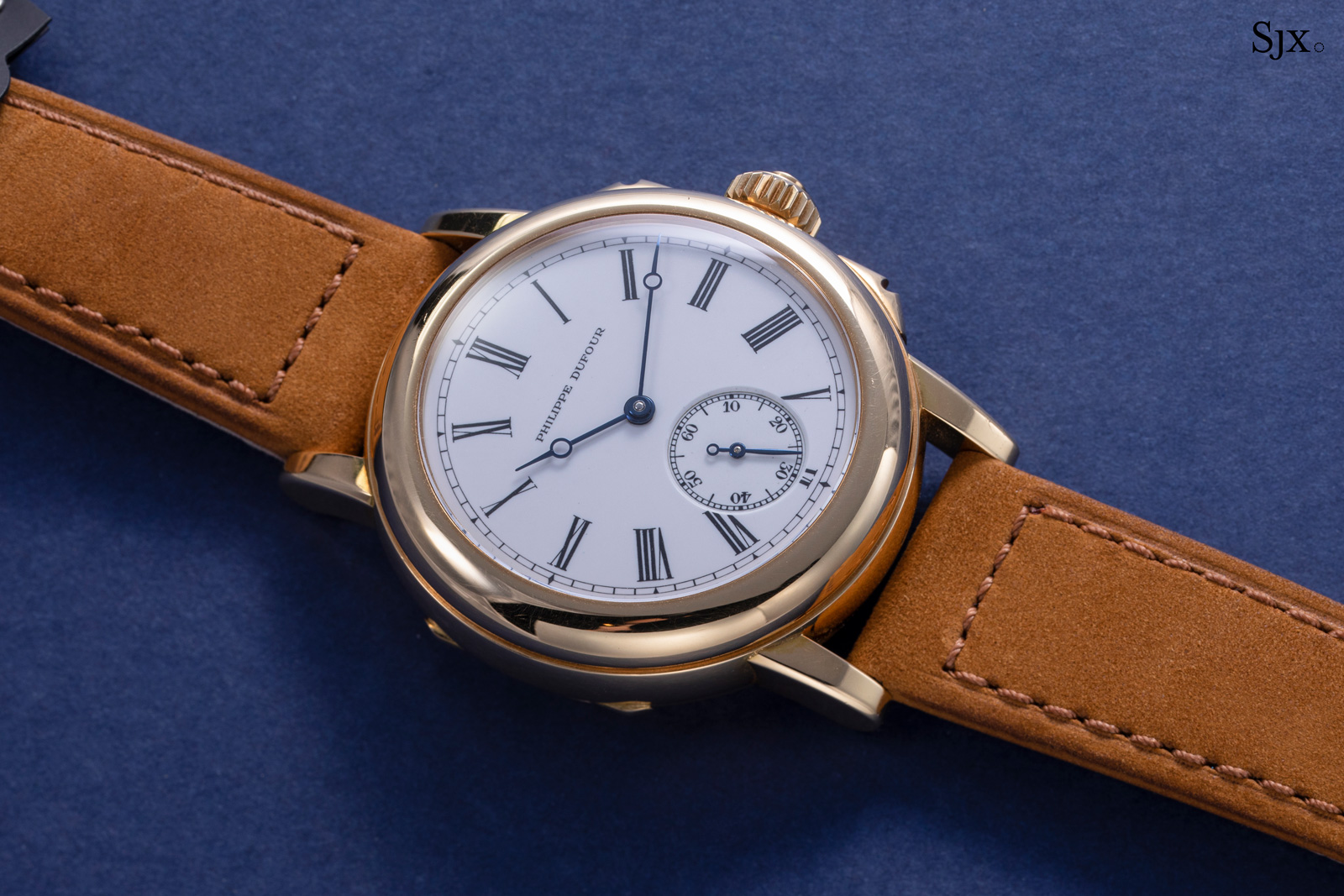 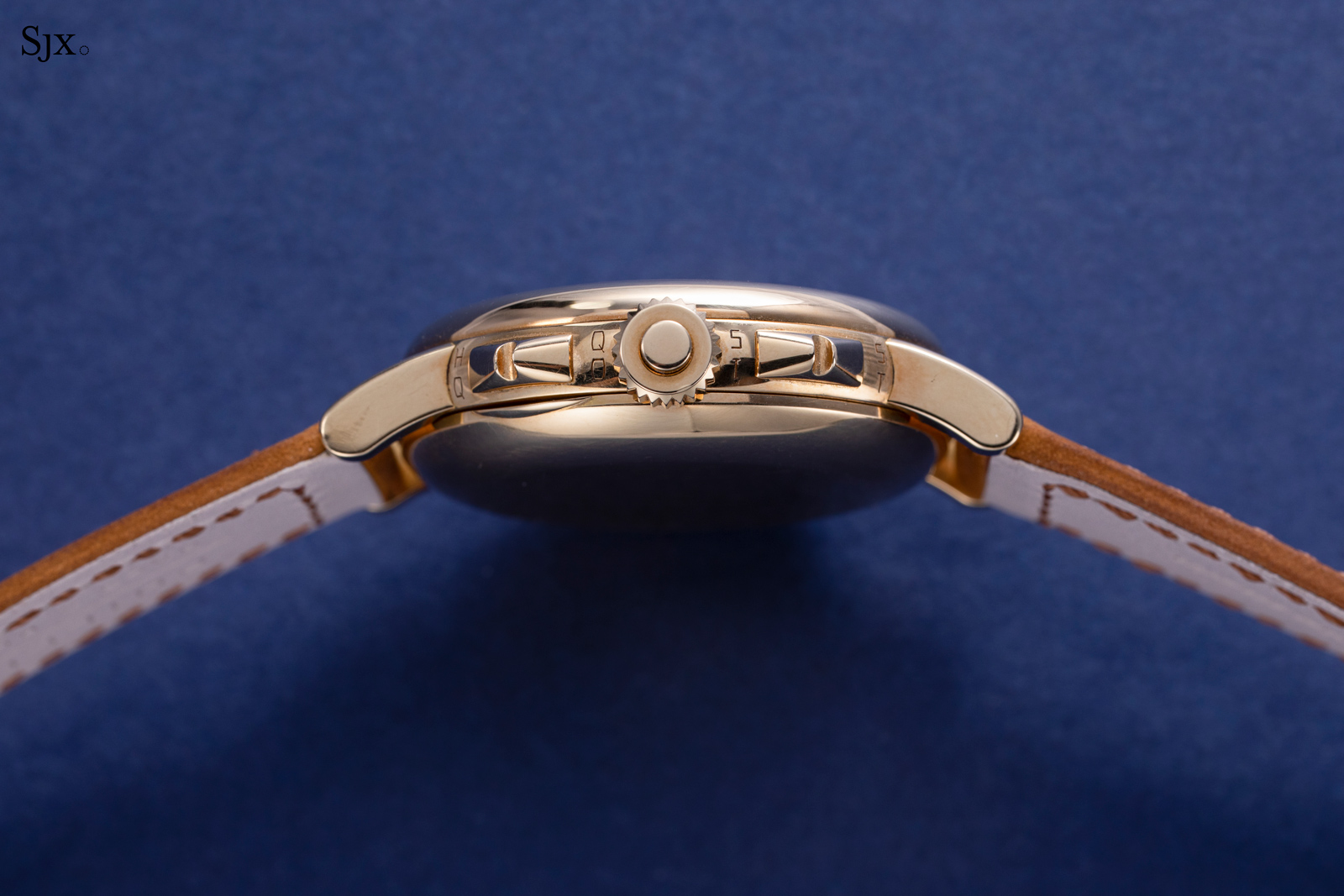 The only details that mark it out as a big league striking watch are the slides on the right flank of the case that are function selectors for the sonnerie type as well as silent or strike mode. And the button within the crown activates the minute repeating function. The case is produced in an old-fashioned, artisanal manner – Mr Dufour has talked about this several times – and that’s evident in its details.

The markings for the slides are hand engraved, while the lugs were clearly soldered by hand. Similarly, the enamel dial is entirely classical in design and manufacture. Made of two parts, it’s a glossy, bright white with typography that is identical to that on a vintage pocket watch, especially with the numbers on the seconds register. Unquestionably traditional is the best way to describe the movement, which is hidden under a hinged lid that snaps shut. The movement itself sits under a press-fit sapphire display back.

Like all classical grande sonnerie calibres, it is essentially divided into halves – one for the striking mechanism and the other for the time. The layout and form of the bridges are entirely classical and would have been familiar to a watchmaker of a century ago. Each half is powered by its own barrel, explaining the twin barrel ratchet wheels, each with a pair of integrated, grande sonnerie-style winding click springs. In between is the crown wheel that winds either barrel, depending on which direction the crown is turned. Turning the crown clockwise winds the going train, while turning counter-clockwise winds the strikework train. The upper barrel above powers the timekeeping portion of the movement, while the lower barrel is for the strikework. The most modern element of the movement is the free-sprung, adjustable-mass balance wheel, instead of the screwed balance wheel that would be standard in grande sonnerie pocket watch 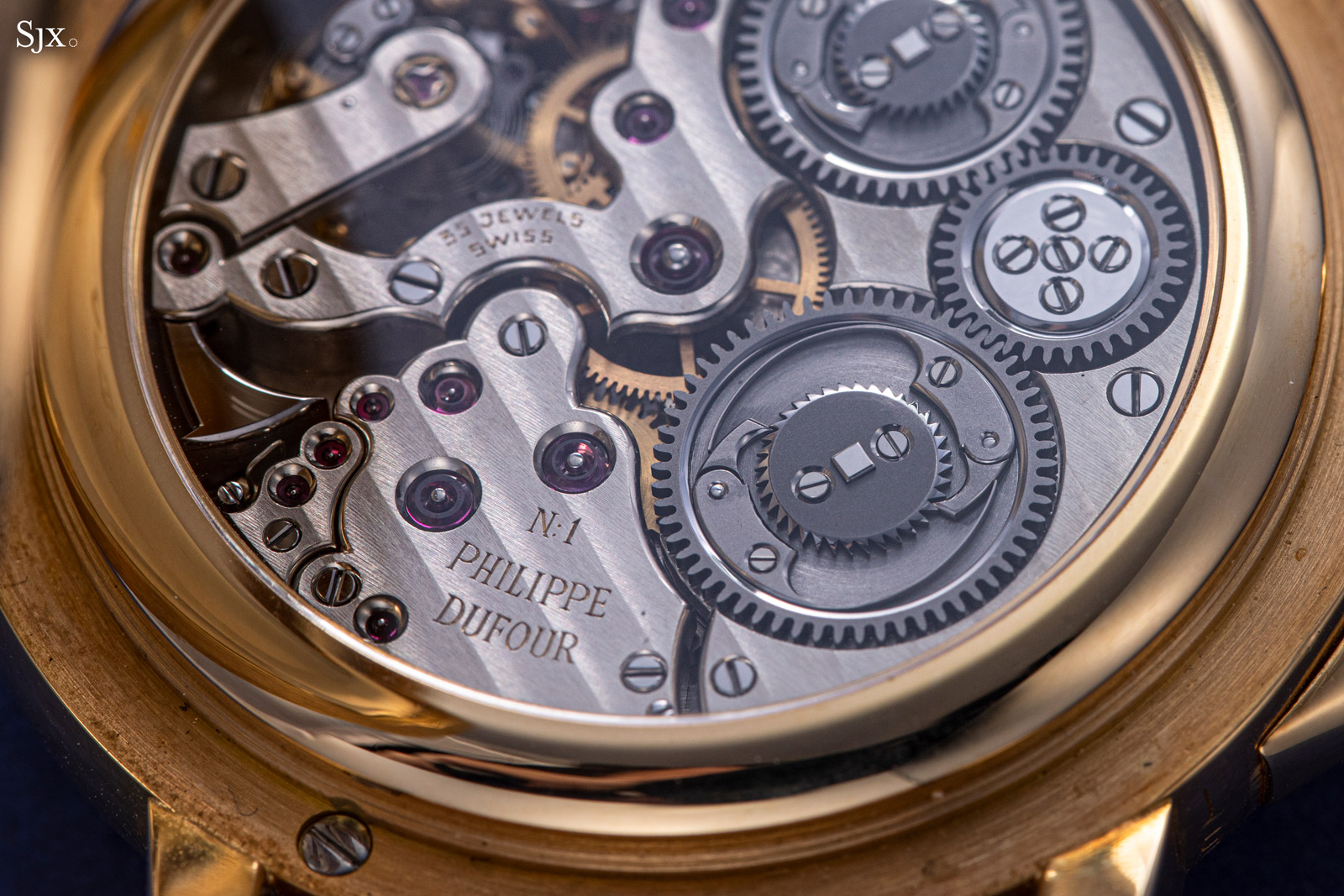 And the finishing is excellent, although it is clear that Mr Dufour honed his craft, and movement decoration in his later work improved. The engraving above appears to have been done with a manually-operated pantograph, resulting in a slightly irregular font; in contrast the brand name and serial number on the strike train bridge is engraved by hand Notably, the teeth of the crown and ratchet wheels are not polished, they are polished on later work

Correction November 5, 2021: The reported price of the Grande Sonnerie wristwatch that transacted in August 2021 was over US$7.6 million, and not US$6 million as stated in an earlier version of the article.