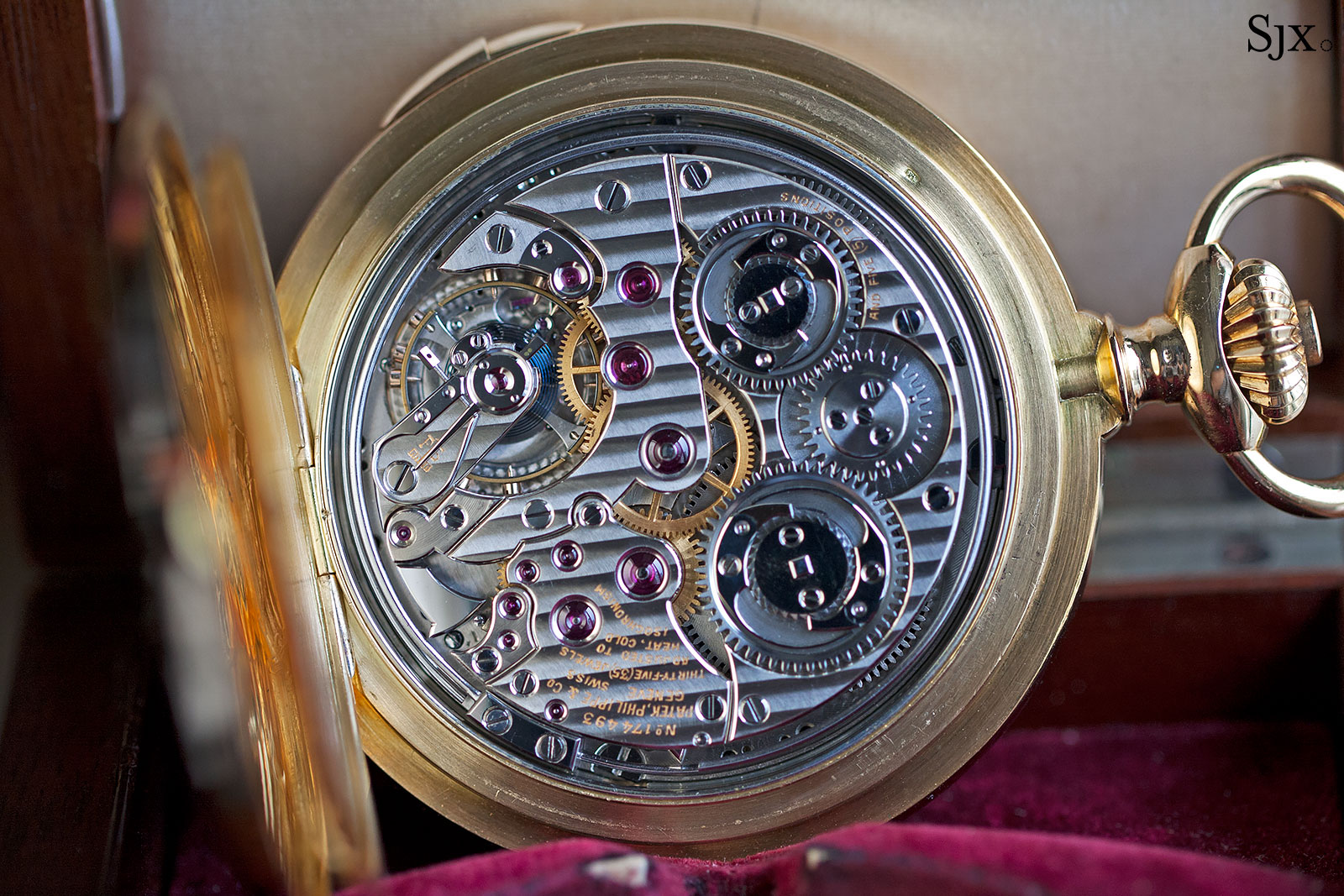 The grande et petite sonnerie is the most complex single complication possible in a timepiece, so much so that less than ten watchmakers have managed to fit it into a wristwatch. But before the grande sonnerie made its way into wristwatches, it was found in pocket watches, just like this magnificent Patek Philippe grande et petite sonnerie clockwatch. There are few timepieces that are truly great, great enough to send a tingle down your spine. This is one of them.

Akin to a minute repeater that strikes automatically, the clockwatch requires deft engineering to ensure there’s enough energy to keep the sonnerie going for the 35,040 chimes per year. Only seven watchmakers have managed to create a wristwatch grande sonnerie, amongst them Audemars Piguet, F.P. Journe and Jaeger-LeCoultre. Patek Philippe introduced its first grande sonnerie wristwatch with the Grandmaster Chime for its 175th anniversary last year. But today we will talk about a Patek Philippe grande et petite sonnerie pocket watch (video of it in action at the very end of the story). Because it has no other complications aside from the grand and small strike functions, this clockwatch looks unassumingly plain. In fact, aside from the tiny slides on the bezel to select the striking mode, there is nothing that reveals its remarkable nature. The slide at 12 o’clock sets the watch to striking (“sonnerie”) or silent mode, while the side at five o’clock toggles between grande sonnerie and petite sonnerie strike settings. This particular watch, like many other ultra-complicated timepieces from the early to mid-20th century, took decades to hit the market. Completed in 1915, the movement was only cased and sold in 1964, almost half a century later. As was the standard practice at the time, Patek Philippe obtained the ebauche, or raw movement, from a specialist maker like Victorin Piguet. Patek Philippe then completed the movement, and notably, sent it to the Geneva Observatory in 1920 for its timing competition. The first half of the 20th century was the golden age of chronometry trials and movement régleurs were stars.

This movement was prepared and regulated for the contest by J. Golay-Audemars, a régleur at Patek Philippe whose name features prominently amongst prize winning movements at the Geneva Observatory. Consequently, this movement placed fifth amongst 43 entries that year, also taking second prize in its class, with 791 points.

Unsurprisingly, the movement is equipped with all the features of a top quality chronometer of the early 20th century – a split bi-metallic balance wheel for temperature compensation and for precision adjustment, a swan neck regulator. The movement is stupendously well finished. It shows its age, with minor scuffs and marks. But despite not being pristine the absolutely impeccable movement decoration is blazingly obvious. Take for instance the black polished swan neck regulator, which is just gorgeous. Even the case and dial are finely made in a manner that is absent in modern watchmaking. All the lettering on the inside case back as well as the bezel is hand-engraved. And the Patek Philippe logo and sub-seconds track are champleve enamel, meaning the lettering is engraved and then filled with black enamel. The Breguet hour numerals are applied. And here are two clips of the clockwatch in action, from the front and back.