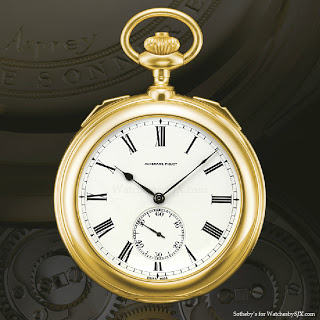 Sotheby’s upcoming sale in Hong Kong on 4 April 2012 will see a pair of grande and petite sonnerie “clockwatches” by Philippe Dufour, the watchmaker behind the legendary Simplicity wristwatch, go under the hammer. Both of these watches are classical watchmaking at its very best. One is an Audemars Piguet pocket watch, No. 1 of a series of five, in yellow gold (Lot 2310) made by Philippe Dufour for Audemars Piguet in 1982. This piece was retailed by English jewellery Asprey and is signed as such.  Mr Dufour has mentioned the work he did for Audemars Piguet in interviews, saying that even though he made the watch his name was not on the dial, citing it as a reason he became an independent watchmaker. The estimate for this is HKD1.0-1.5 million, which is USD128,800-193,200. I’m certain it will at least sell for the higher end of the estimate. The second is a Philippe Dufour Grande and Petite Sonnerie wristwatch in pink gold from 1993 (Lot 2311). This model of grande sonnerie was the first wristwatch ever to contain this complication. Mr Dufour has only made six (or perhaps seven) grande sonnerie wristwatches. Christie’s sold a similar watch to this, but cased in white gold, for just over CHF437,000 in 2008. The estimate for this is HKD2.2-3.2 million, which works out to about USD283,000-412,000. Though not explicitly specified in the auction description, I believe both pieces are being sold by the same owner. Congratulations in advance to the eventual winner. – SJX