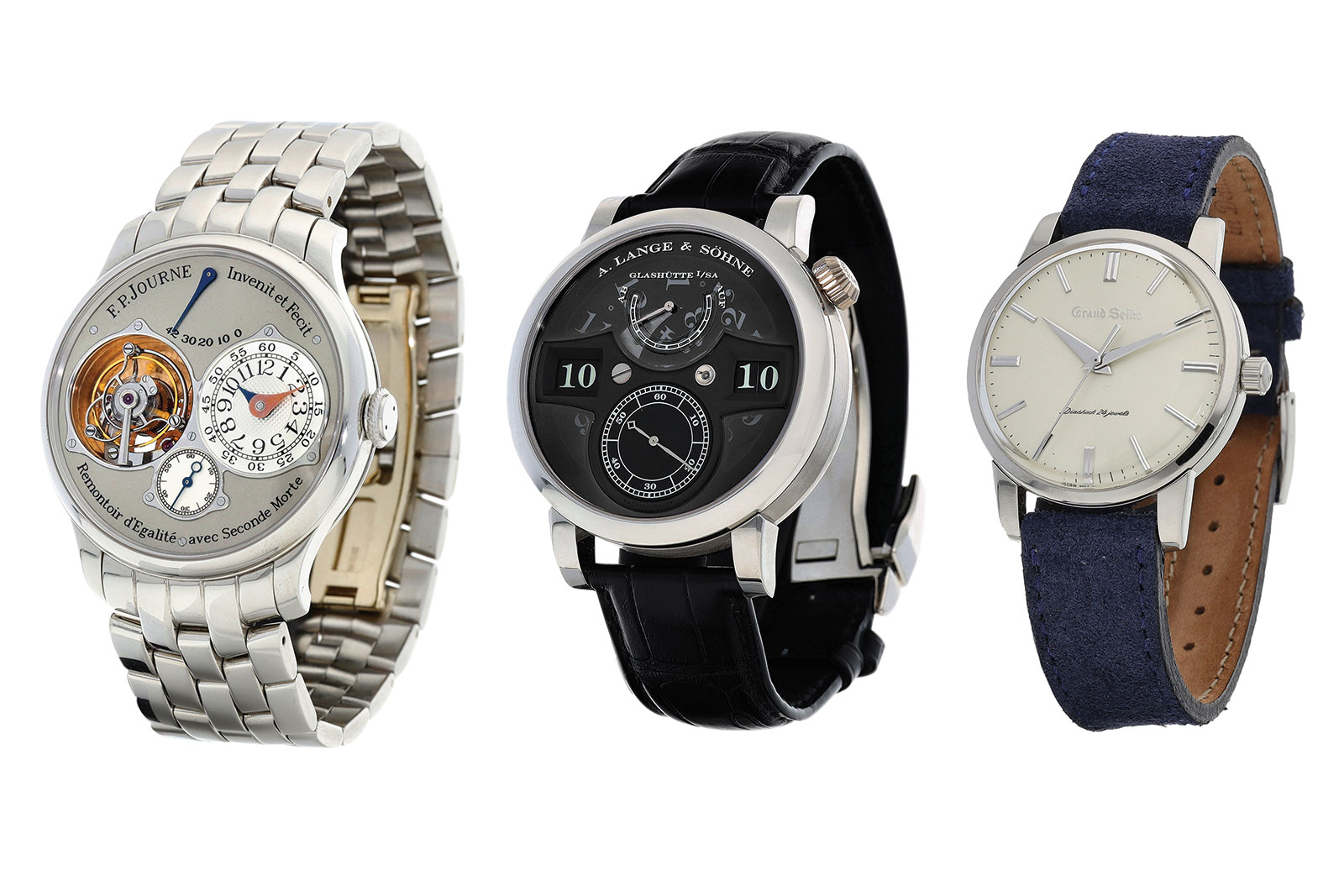 Sotheby’s latest online sale is in a quirky combination of luxury watches and high-end sneakers – some of which cost more than the watches. Fortunately the large majority of the 164 lots are horological, with a selection of watches that’s diverse and interesting, led by a couple of heavyweight top lots.

The heavyweights are quite literal, both complicated watches in platinum from brands widely regarded as benchmarks in contemporary watchmaking: an F.P. Journe Tourbillon Souverain with a platinum case and bracelet, along with the A. Lange & Söhne Zeitwerk Luminous “Phantom”.

The sale also includes more esoteric watches that might be overlooked, including as a retailer-edition Patek Philippe Calatrava with ruby markers, and a Grand Seiko “First” remake in platinum.

The Fine Watches and Rare Sneakers auction is live online from now until June 8, 2021. The full catalogue and registration for bidding are available here.

This particular example of the Tourbillon Souverain is rare and unusual in several respects. Most obvious is the platinum bracelet, which is rare because it was an extremely expensive option when the watch was new.

Less apparent but more important is the 38 mm case. It was again an option but one that few opted for, since the 40 mm case was the default and accounts for the vast majority of the Tourbillon Souverain. 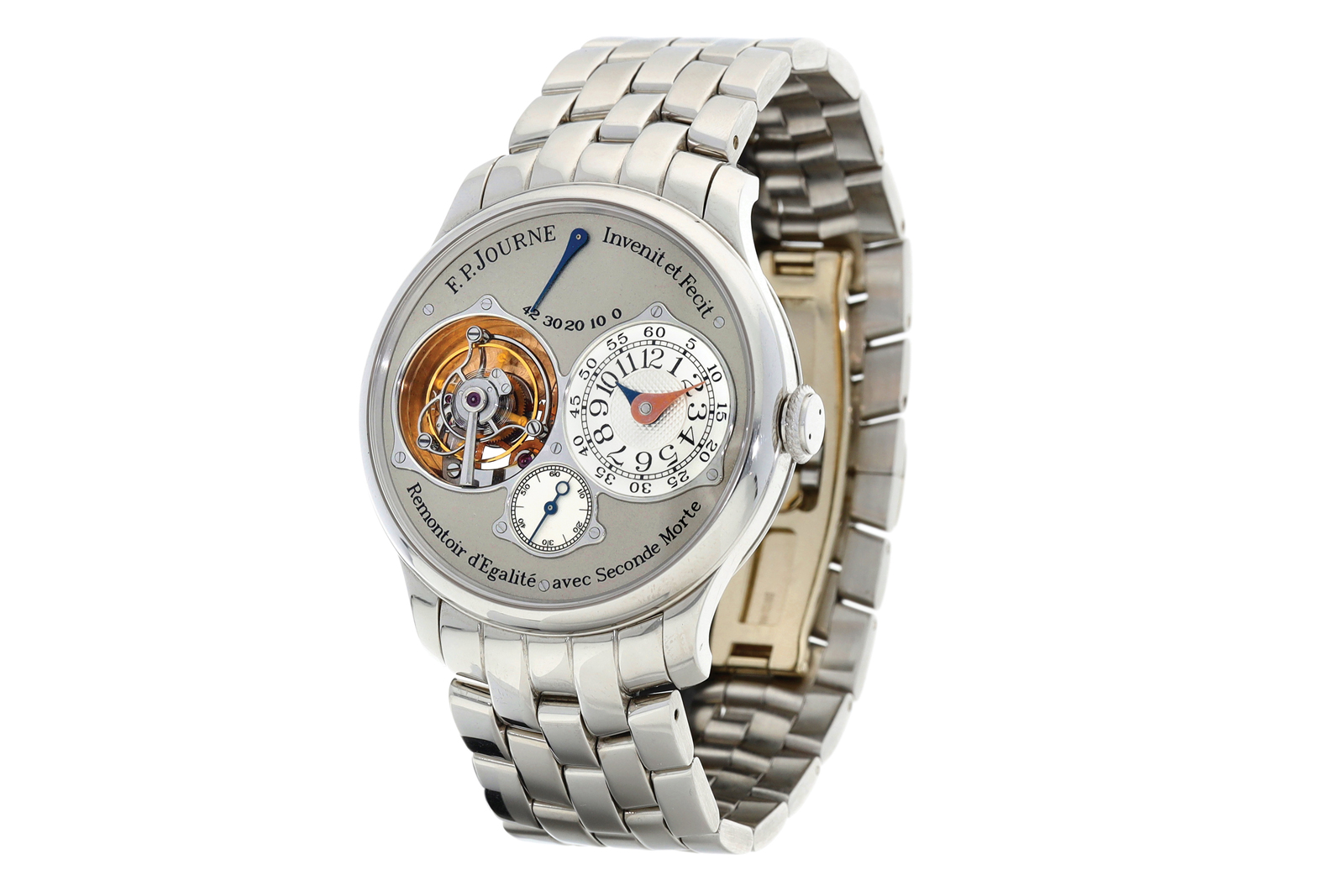 The clasp is made of uncoated 18k white gold, explaining its colour

Most intriguing are the hands. Instead of the usual pair of blued steel hour and minute hands, this example has a rose gold minute hand, presumably customisation specified by the client to aid legibility because both the hands are similar in length and shape. 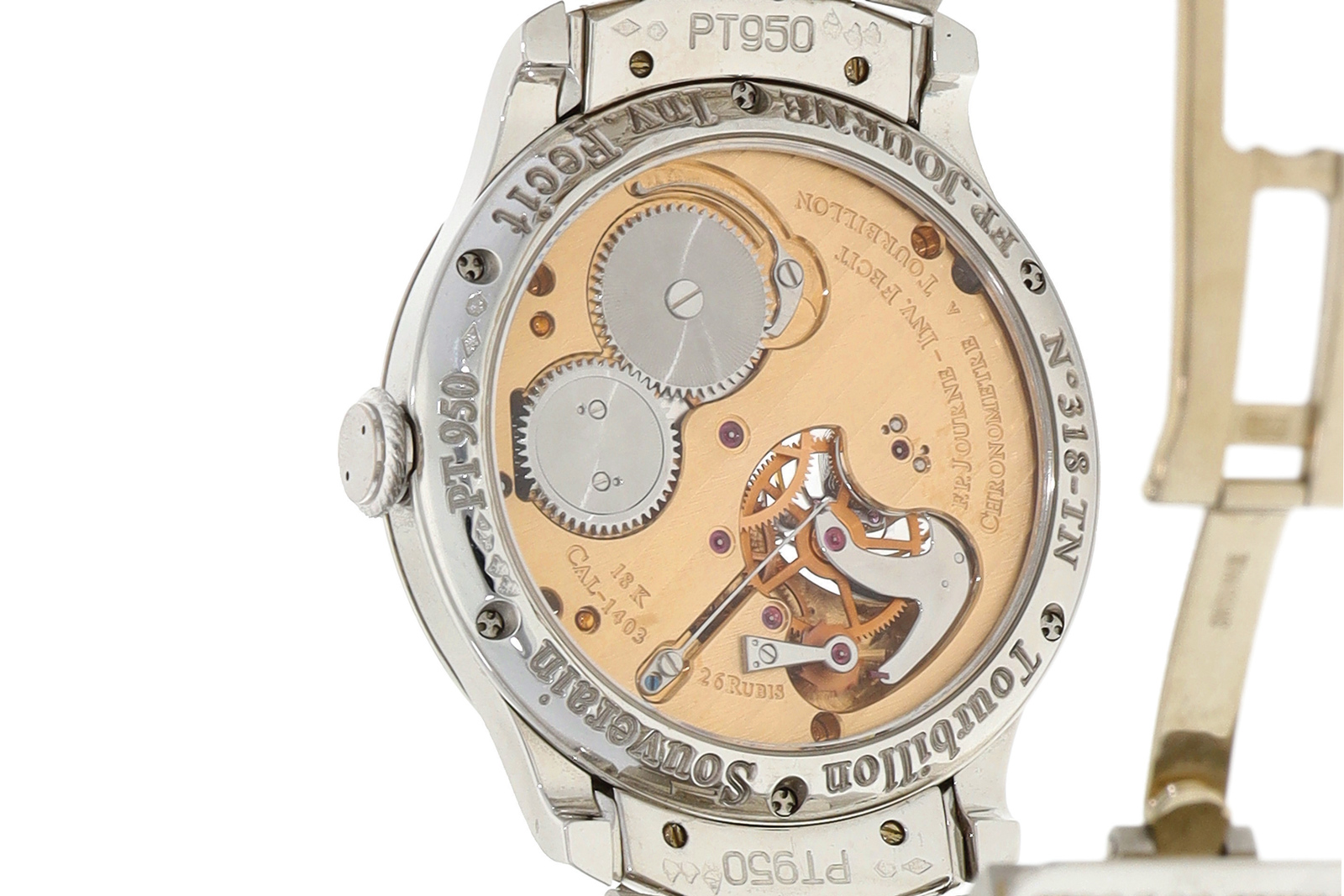 The present example was made in around 2006, or two years after the launch of the model. Presented with its original box and warranty card, it has an estimate of HK$1.6-2.0 million, or approximately uS$206,000-258,000. Full lot details here. 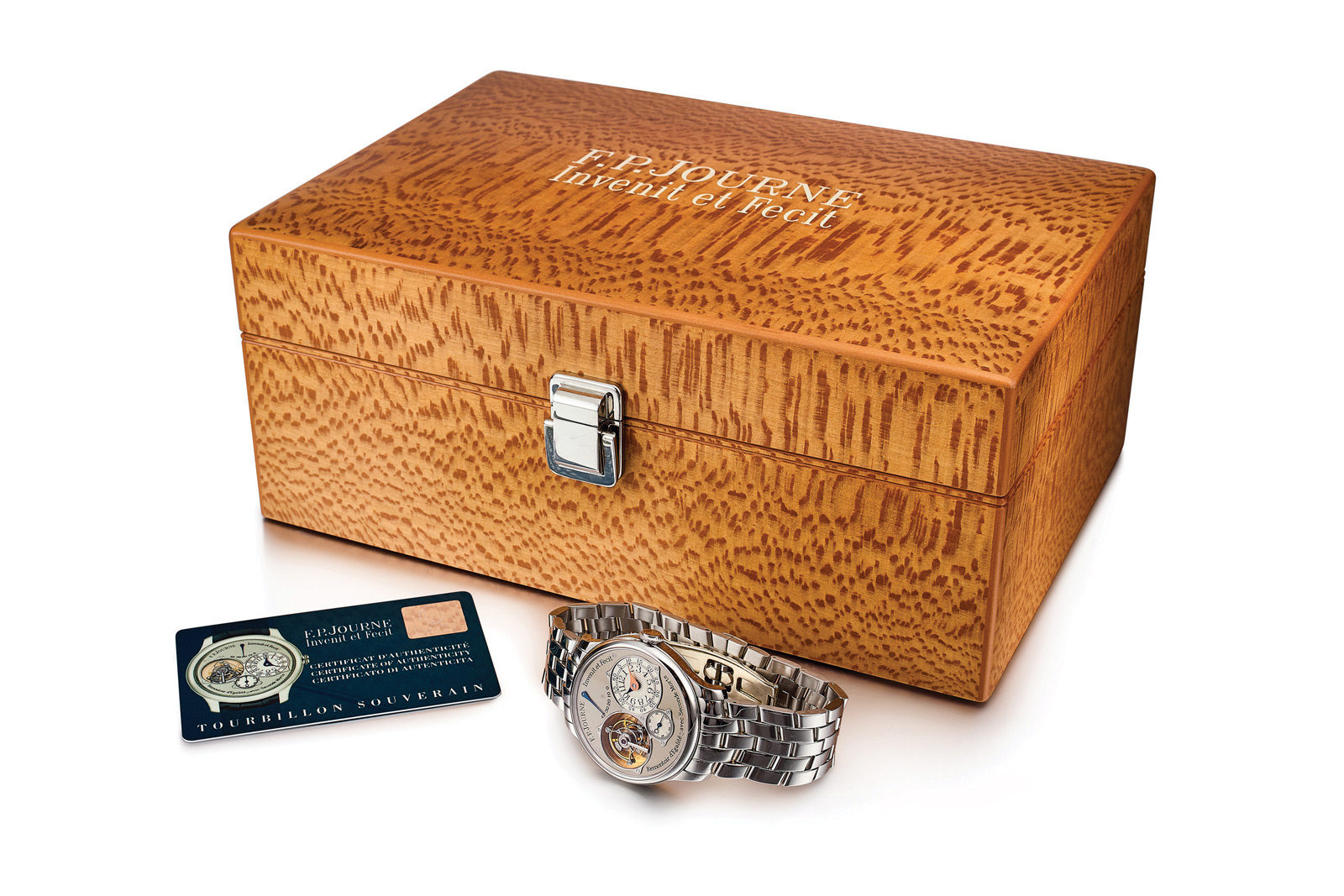 The second heavy-hitter in the sale is from A. Lange & Söhne, a brand whose complicated wristwatches are now increasingly desirable.

While Lange is perhaps best known for its fine chronograph movements, its signature digital watch – with jumping hours and minutes – is more inventive and arguably more impressive. And amongst the several Zeitwerk iterations to date, the “Phantom” is no doubt the most striking. While the in-line digital display was contemporary from its launch, the Zeitwerk was perhaps truly perfected with the translucent sapphire dial revealing the glow-in-the-dark discs underneath. But despite its simple digital display, the Zeitwerk is complex and eminently traditional. In fact, it’s more elaborate than its digital peers, as we detailed recently. And its movement finishing is peerless, done to a level that surpasses many rivals, illustrated by details such as black polishing and hand engraving. 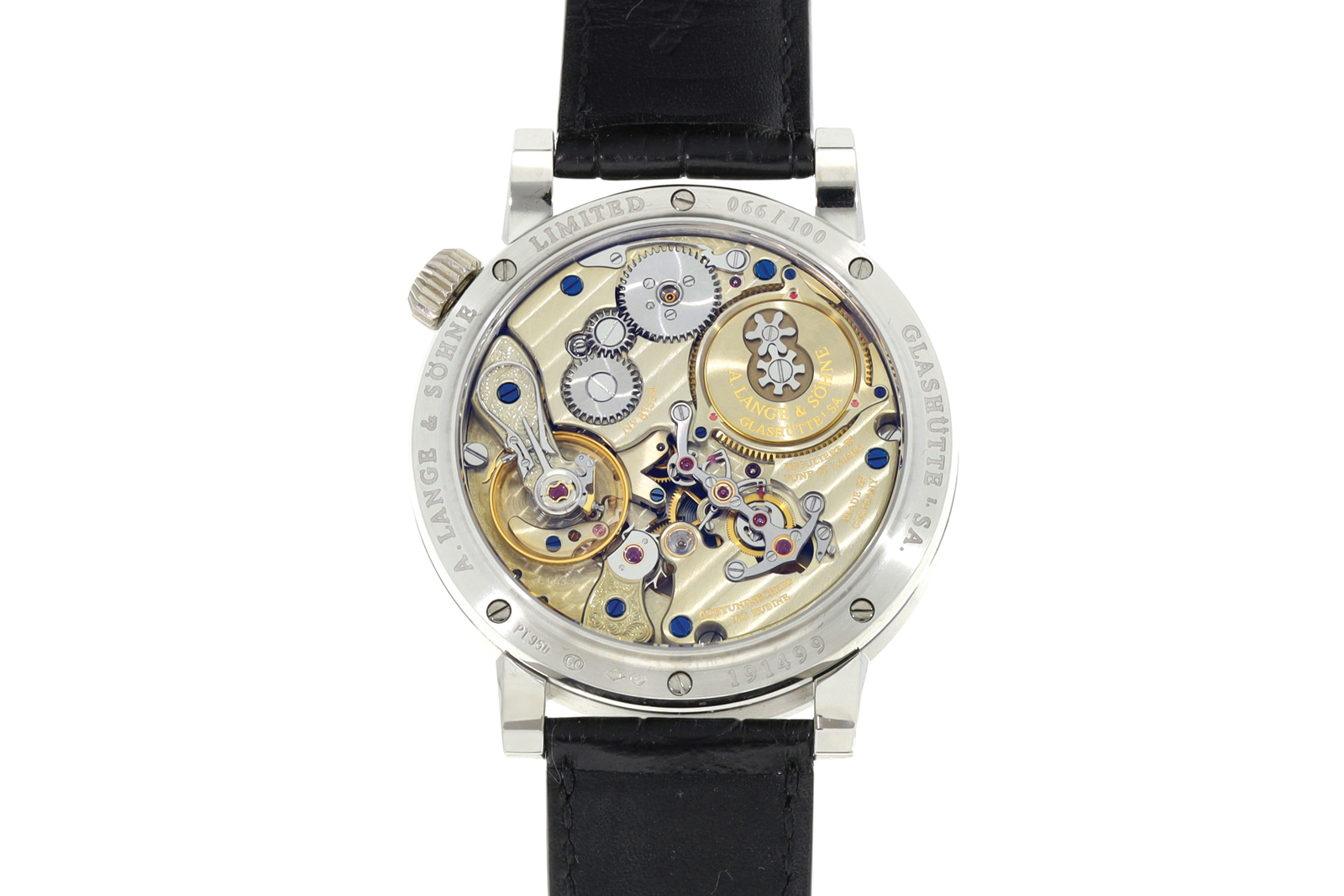 Importantly, the “Phantom” was limited to just 100 pieces that sold briskly after its 2009 launch. Subsequently Lange luminous editions were limited to 200 watches, presumably as a result of its success. 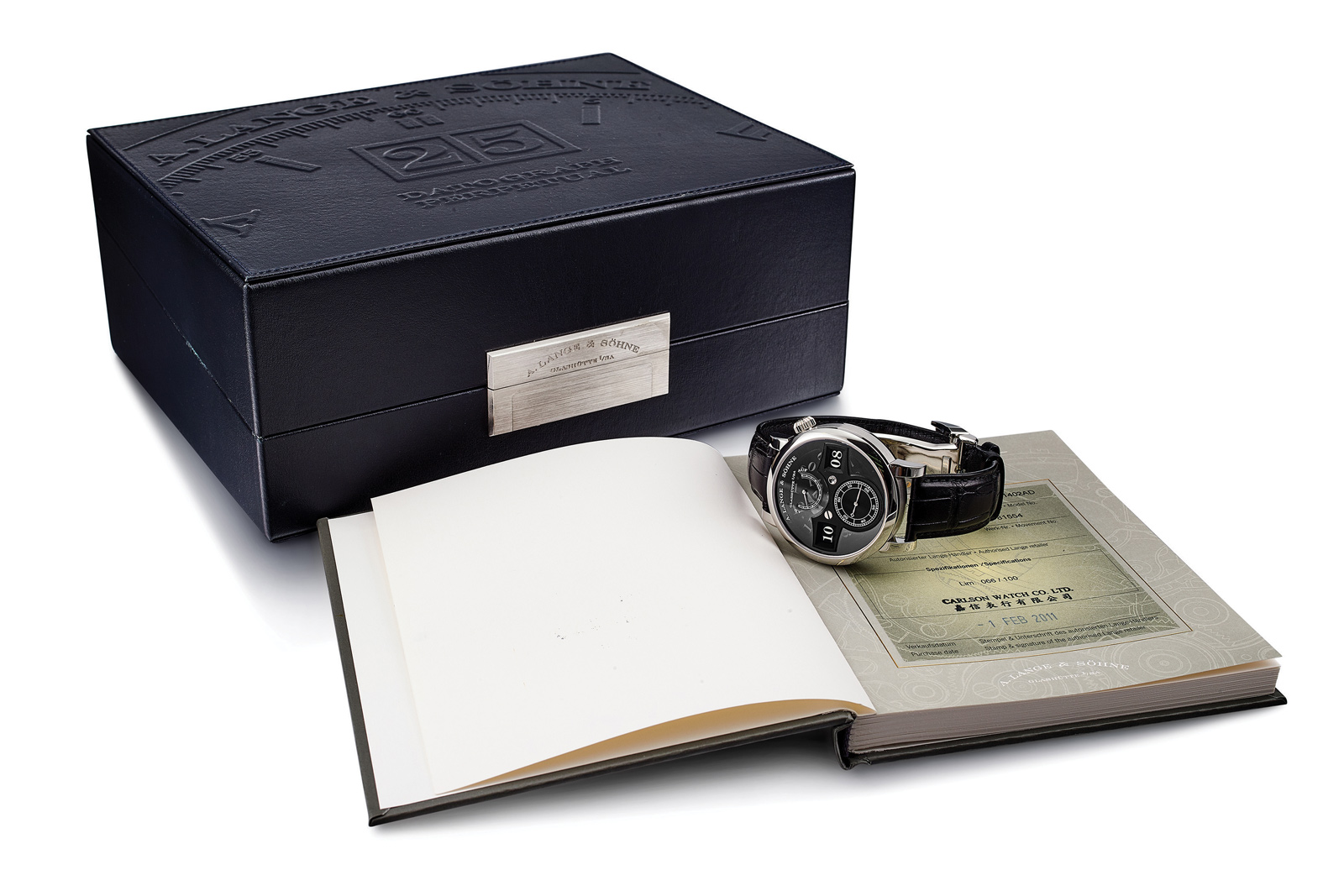 It’s worth noting this example is accompanied by a mismatched box (that’s instead for the Datograph Perpetual), but given that the watch did not have a special box to begin with, obtaining a replacement should not be too difficult.

In contrast to the two previous lots that appeal for their tangible complexity, the Patek Philippe Calatrava ref. 3923 is a simple wristwatch executed gracefully.

Its most attractive detail are the ruby hour markers, perhaps a textbook example of discreet, elegant gem setting. Small but apparent, the rubies just enough flair to make the watch interesting, while preserving the classically clean Calatrava look.

The ruby hour markers give away the fact that this ref. 3923 isn’t just a regular Calatrava. It is instead a little-known special edition that was made in 1995 for the 25th anniversary of Wu Shang Trading, Patek Philippe’s distributor in Taiwan. Twenty were made in each colour of gold, and this example is in yellow gold. 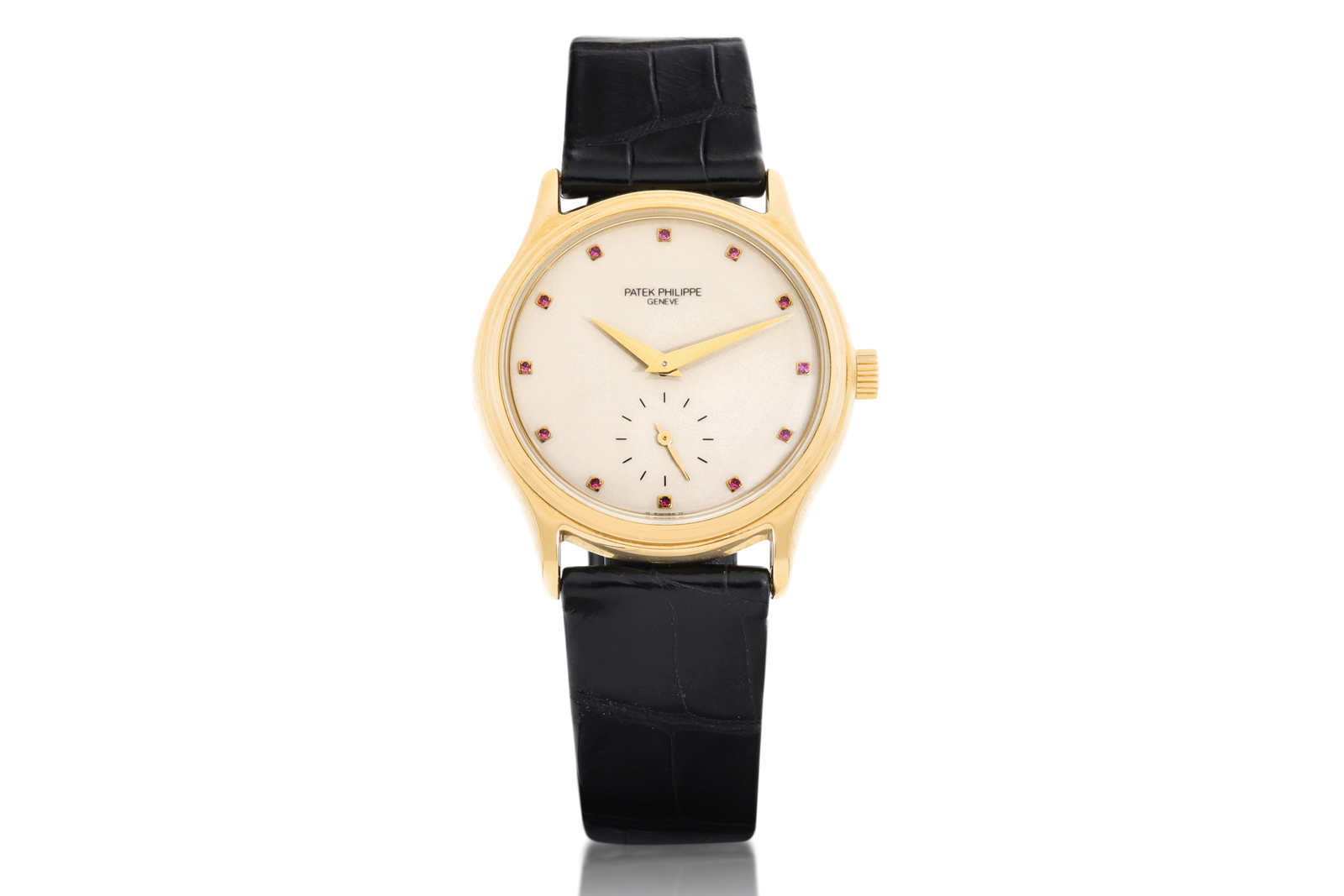 The ref. 3923 is small at 32 mm in diameter, but the ruby dial certainly helps increase its presence. The upside of the case size is that the cal. 215 inside is a perfect fit, resulting in a beautifully proportioned dial with the small seconds sitting midway between the hands and edge. 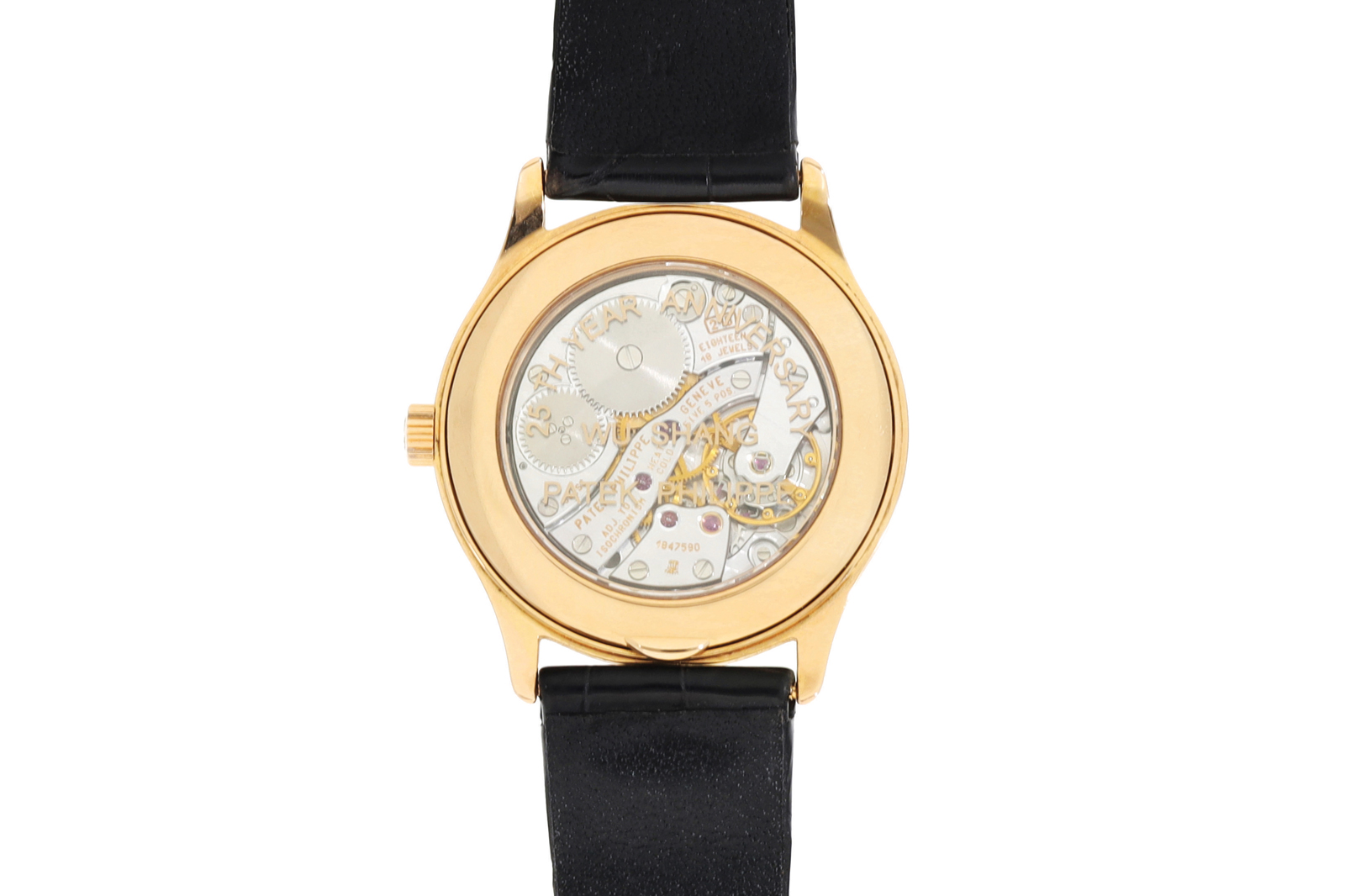 Another elegant dress watch in the sale is appealing for different reasons. While the rubies give the ref. 3923 a touch of extravagance, the Grand Seiko ref. SBGW239 is pure in colour and style. It beauty comes from the sharply executed details and distinctive design of the Grand Seiko “First”.

Long an insider’s brand – having tapped the international market starting a decade ago – Grand Seiko watches is not commonly seen at auction, though that’s changing with growing demand. This example is a remake of the brand’s very first wristwatch, the ref. 3180 that debuted in 1960, often known as the “First”. 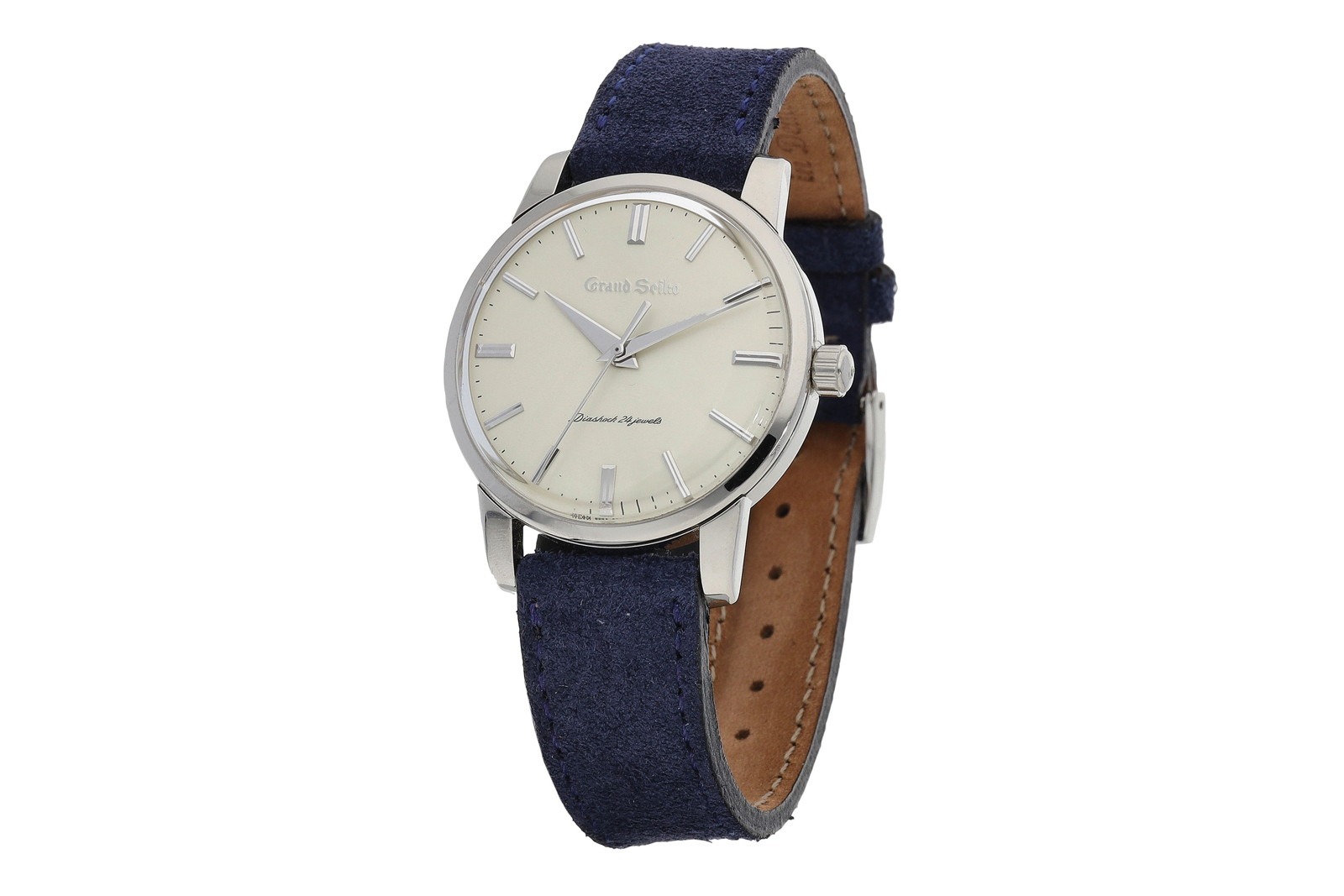 While the “First” has been reissued on a handful of occasions, the SBGW039 was the first remake in platinum, having been introduced in 2011 for the 130th anniversary of Seiko. Limited to just 130 pieces, it echoes the vintage original ref. 3180, which was also made in platinum, but in similarly tiny numbers.

Aside from its obvious weight, the SBGW039 is subtly different – its seconds hand is in polished steel, instead of the blued steel found on the steel version. 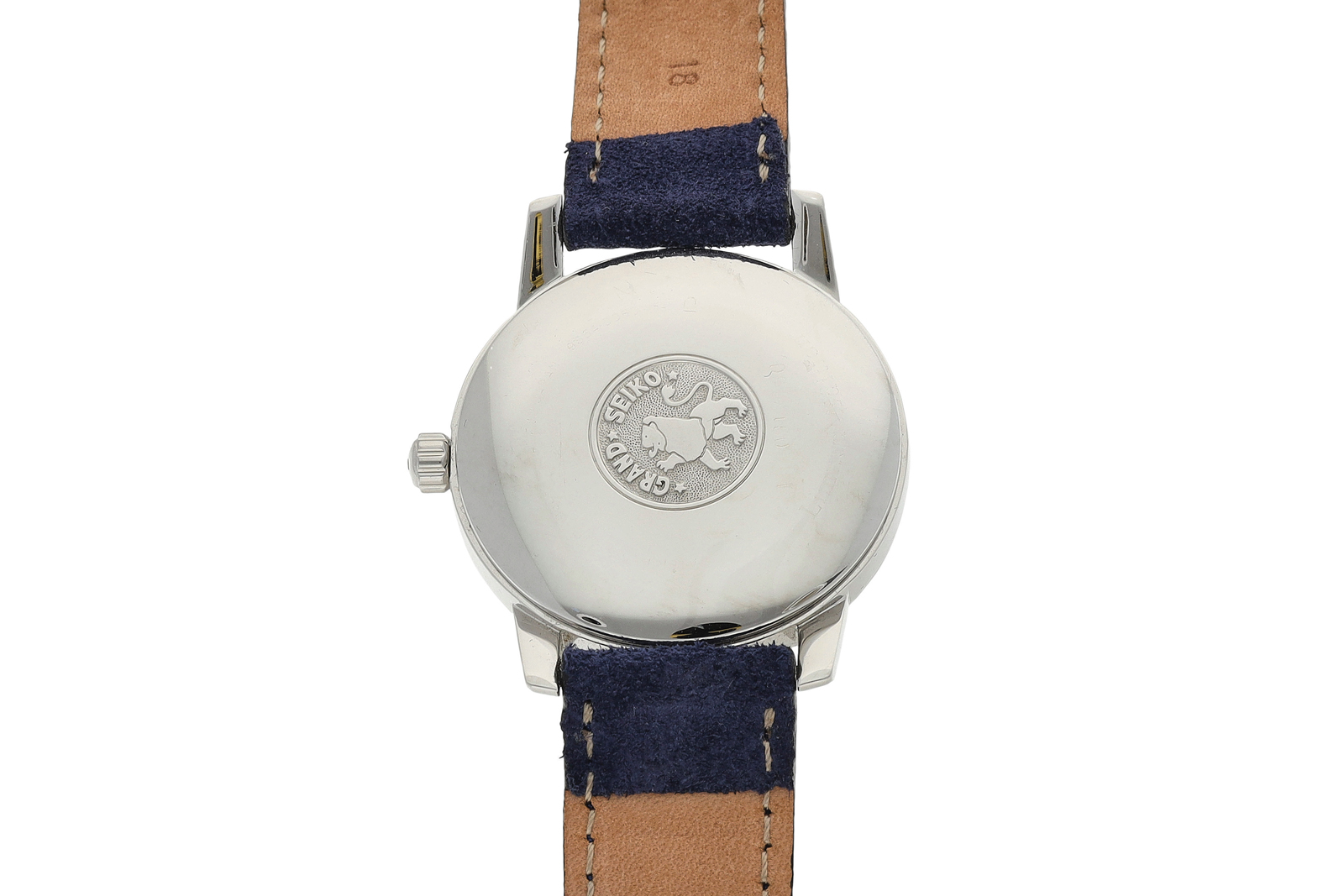 Next up is an extravagant Gérald Genta desk clock. No doubt the most lavish timepiece in the sale, the clock is made of rock crystal and solid gold, with an over-the-top style that evokes a bygone era of contemporary watchmaking. But more than the precious materials, the clock is impressively executed a technical sense. An ultra-thin Frederic Piguet pocket watch calibre, the movement within has been has been skeletonised front and back in the traditional manner, with the bridges manually cut and filed by hand before being engraved with floral patterns. 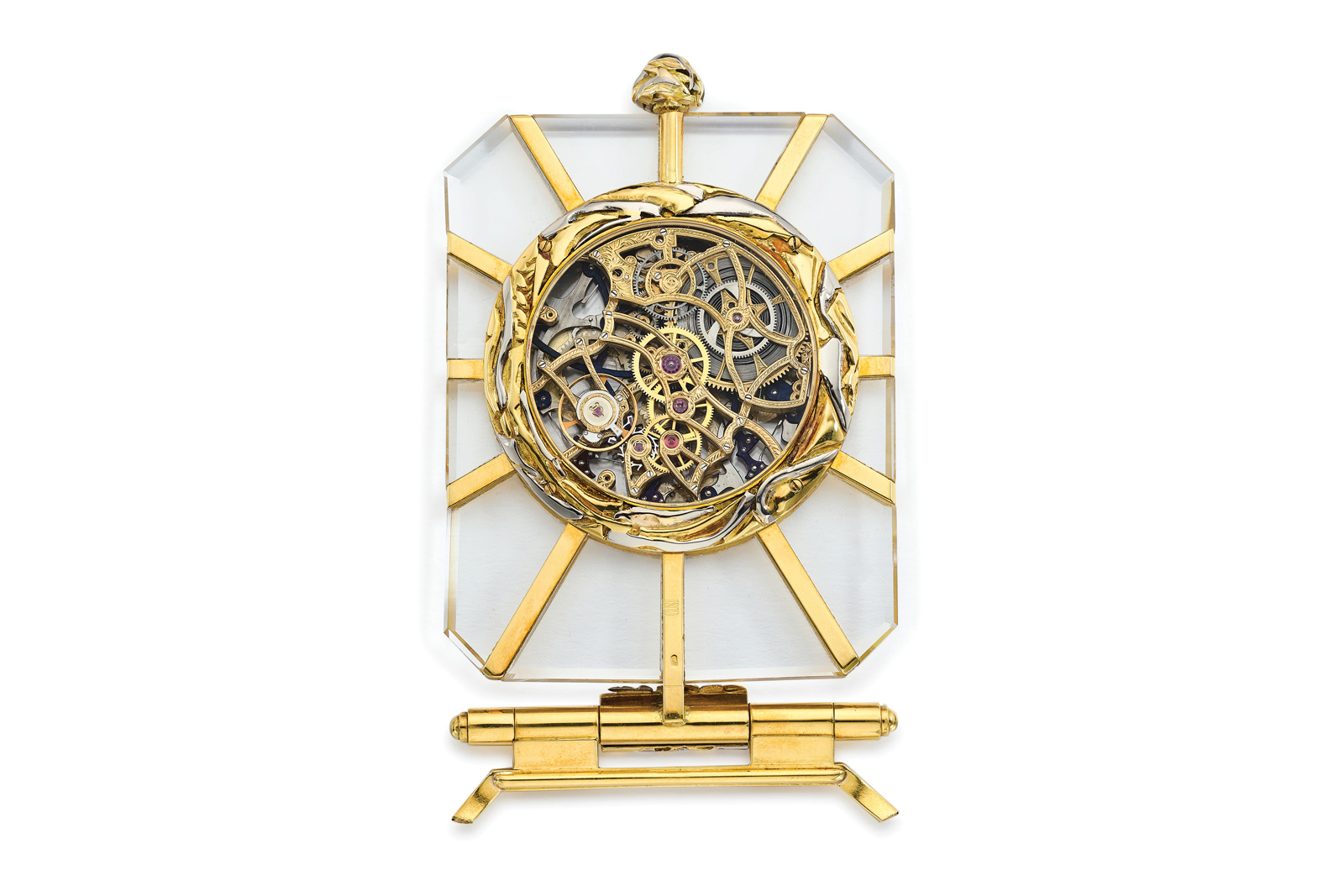 And it’s a perpetual calendar, perhaps the complication that’s most practical on a desk clock, since the calendar display can be larger than on a wristwatch.

An uncommon detail made possible by the larger dial is the month indicator at three o’clock, which comprises 48 months, meaning the months hand completes one revolution every four years. 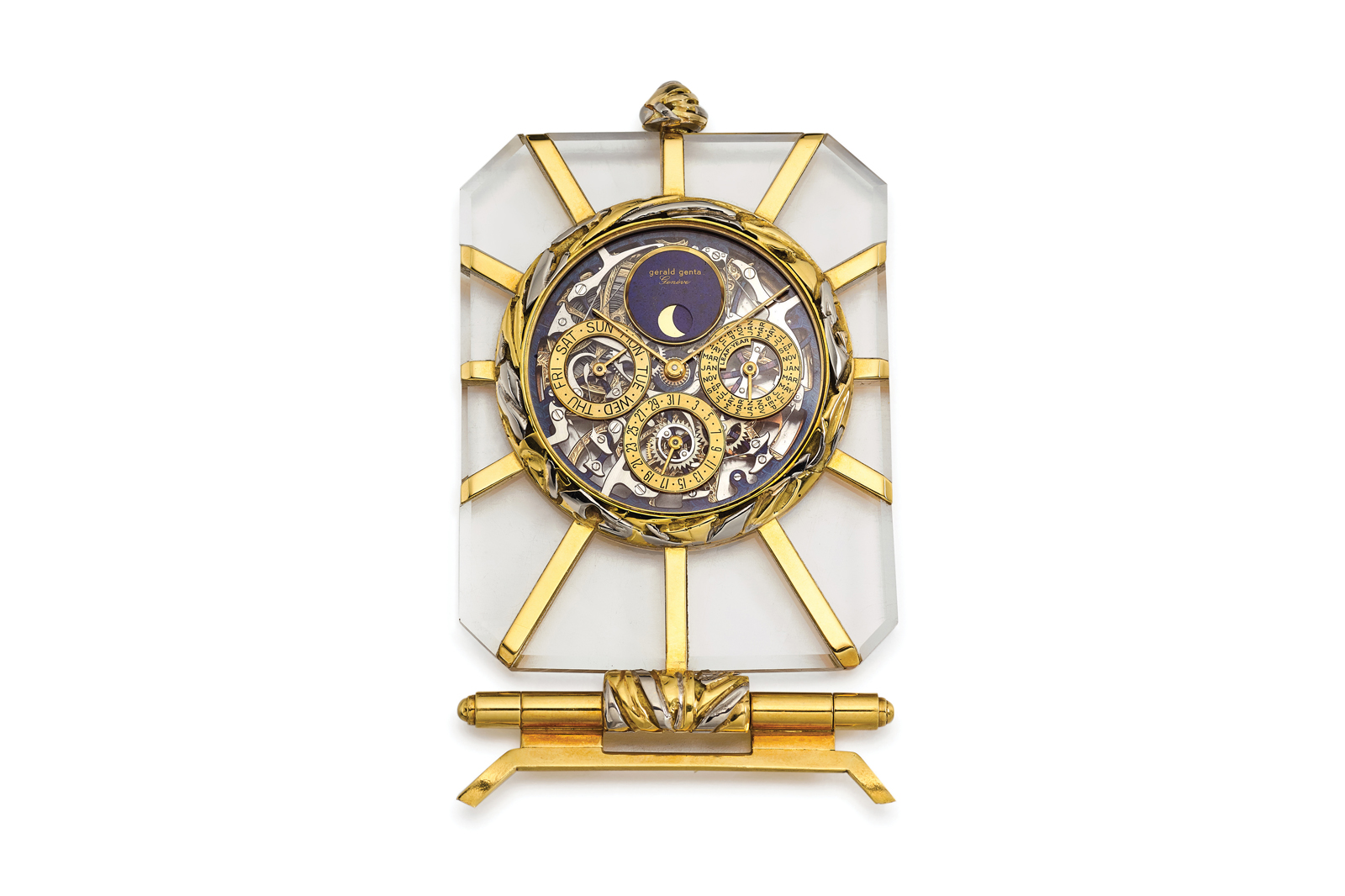 Last but not least is a Daniel Roth Le Sentier automatic with an uncommon and popular “salmon” dial. The Le Sentier was one of the simplest models offered by Daniel Roth – a brand and watchmaker now enjoying a resurgent interest – but still instantly recognisable thanks to the signature double-ellipse case. In Daniel Roth’s typical style, the dial is classical and obviously Breguet inspired – explained by the fact that Mr Roth helped established the modern-day Breguet firm before setting up his eponymous brand.

The dial is notable for its rich texture: pinstripe guilloche and a chapter ring for the Roman numerals, along with tiny, applied luminous markers on the minute track matched with lumed tips on the blued steel hands. Daniel Roth relied on leading movement makers for most of its movements, and this watch is powered by a compact Frederic Piguet calibre that’s visible through the display back.