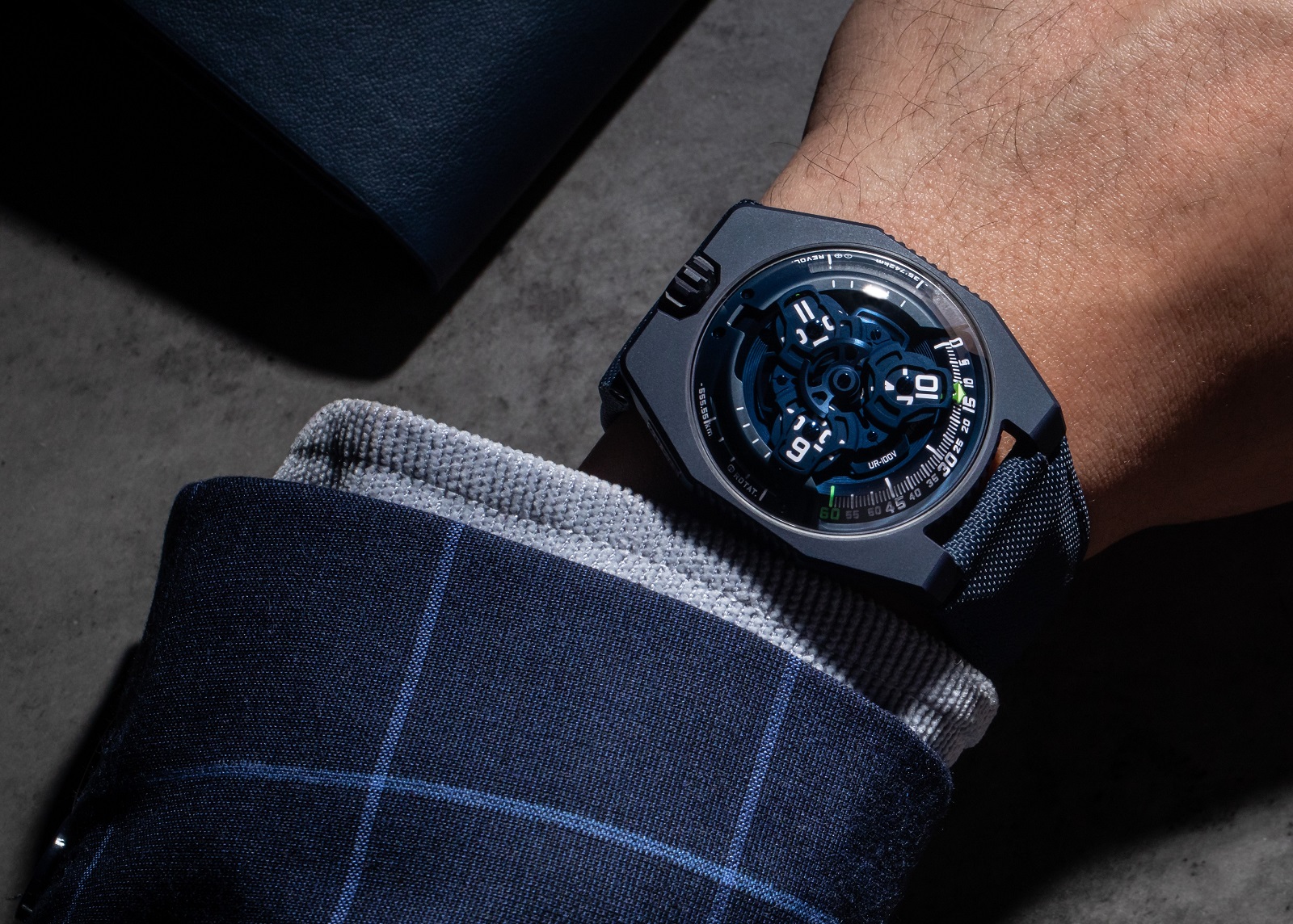 Urwerk’s avant-garde approach to telling the time is most affordable with the UR-100, the brand’s entry-level model that nonetheless features its signature satellite-disc wandering hours. Having been executed in different finishes in several small runs – most recently with the UR-100V T-Rex – the watch now makes its debut in its most novel livery yet – the UR-100V “Blue Planet”.

The Blue Planet is the seventh iteration of the UR-100 – from titanium, to gunmetal, and a luxe version in solid gold – which is unsurprisingly since the model has sold well due to its affordability, wearability, and unique design. The sheer number of editions diminishes the appeal of the Blue Planet somewhat, even though the blue treatment is a first. 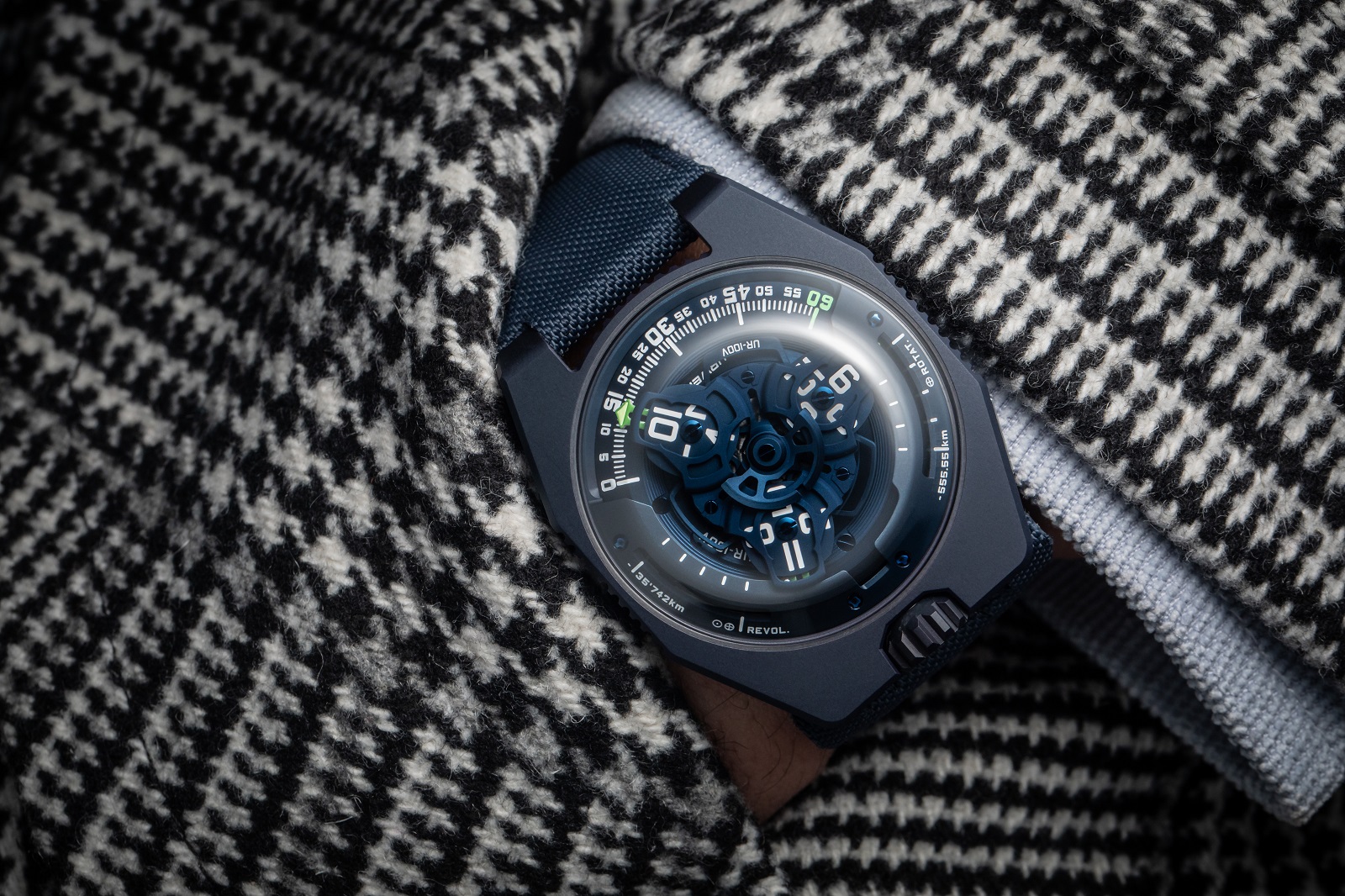 While the Blue Planet might feel underwhelming simply being a new colour, it is actually unique amongst Urwerk watches for having a blue movement. Despite the Technicolor palette that Urwerk has applied to its cases, its dials – which are actually part of the movement – have always been black, grey, or silver.

The case of the Blue Planet is coated with a dark blue ceramic coating, with the components of the time display are finished in a darker, metallic shade of the colour. Standing out against the all-blue aesthetic are minute hand and 60-minute marker in bright green.

Almost entirety of the wandering hours display is rendered blue, albeit in subtly different shades. Most notable are the titanium screws, which are heat blued in the traditional way relying on a technique Urwerk cofounder Felix Baumgartner learnt from his clockmaker father. A tiny but significant detail, the flame-blued metal is a first for Urwerk, and harks back to old-school watchmaking. 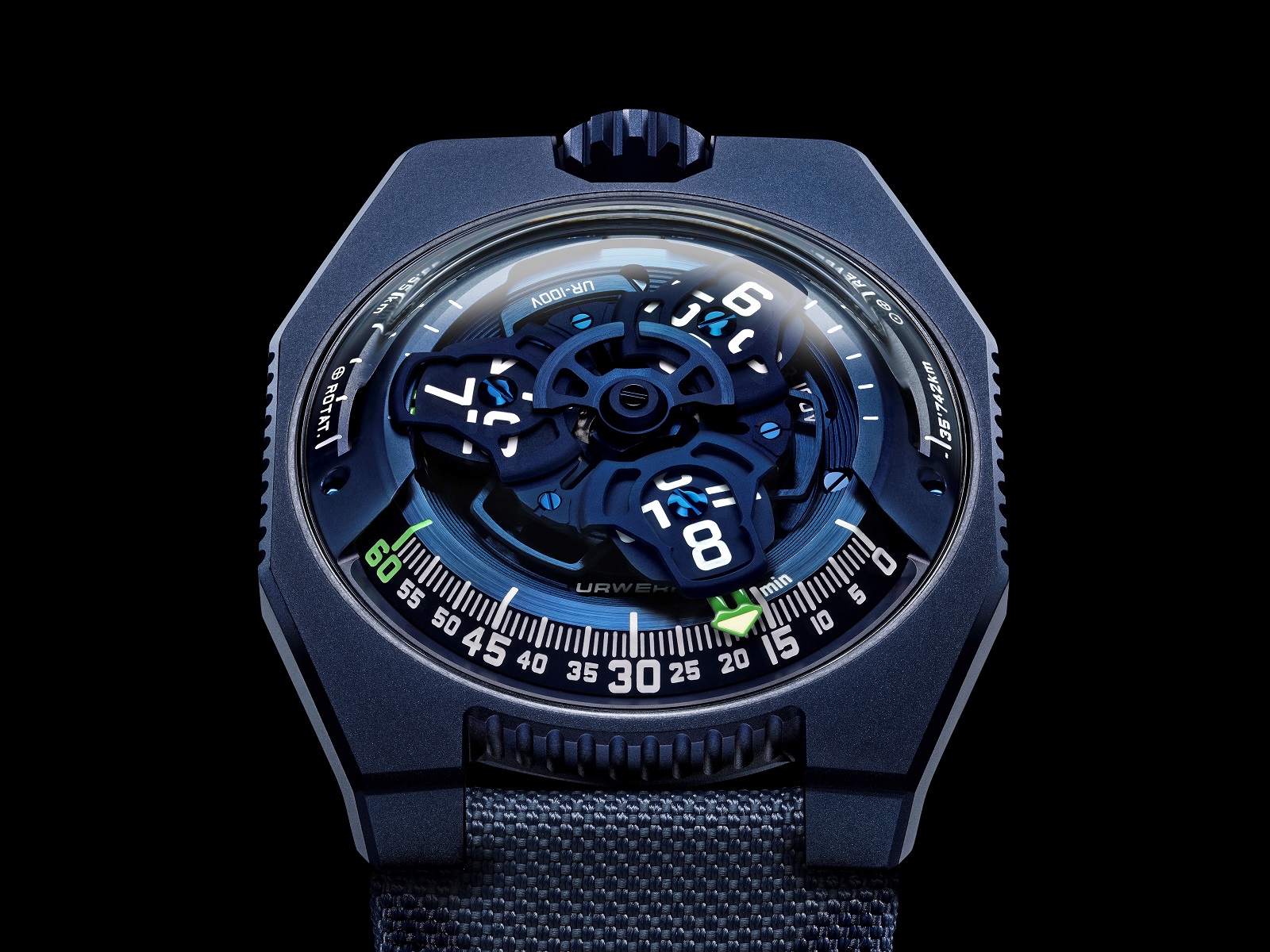 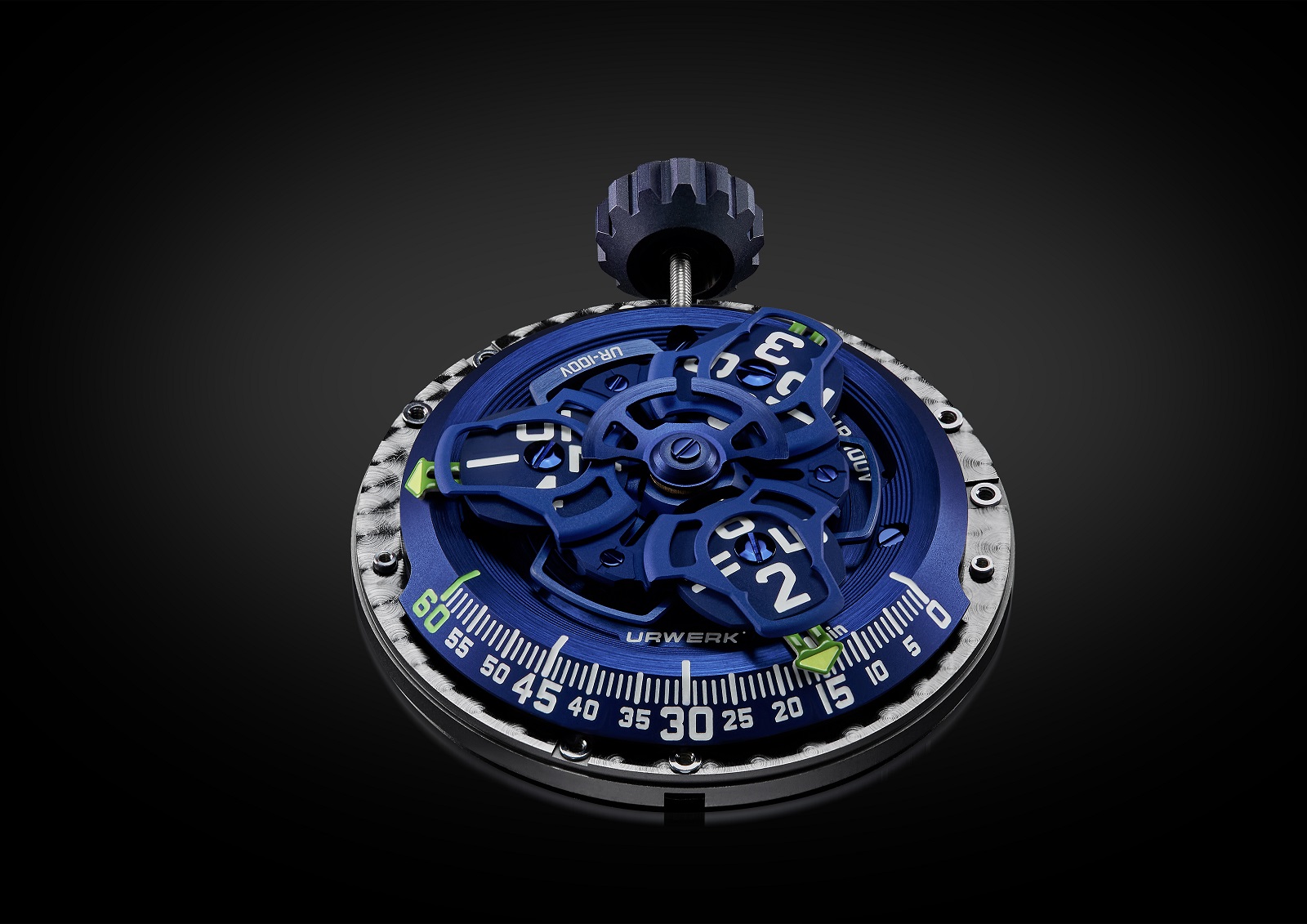 Like the previous iterations of the UR-100, the Blue Planet is powered by the UR 12.01, which has the reliable Zenith Elite as the base to power Urwerk’s proprietary time display module.

Most of the elements of the movement have been finished in blue as well, including the turbine rotor. The “planetary turbine automatic system” functions like a conventional rotor, but its rotational speed is governed by a seven-toothed wheel fixed to a smaller gear below that meshes with a large-toothed ring on the perimeter of the movement. This design is meant to moderate the movement of the rotor, preventing it from spinning too quickly during vigorous activities. 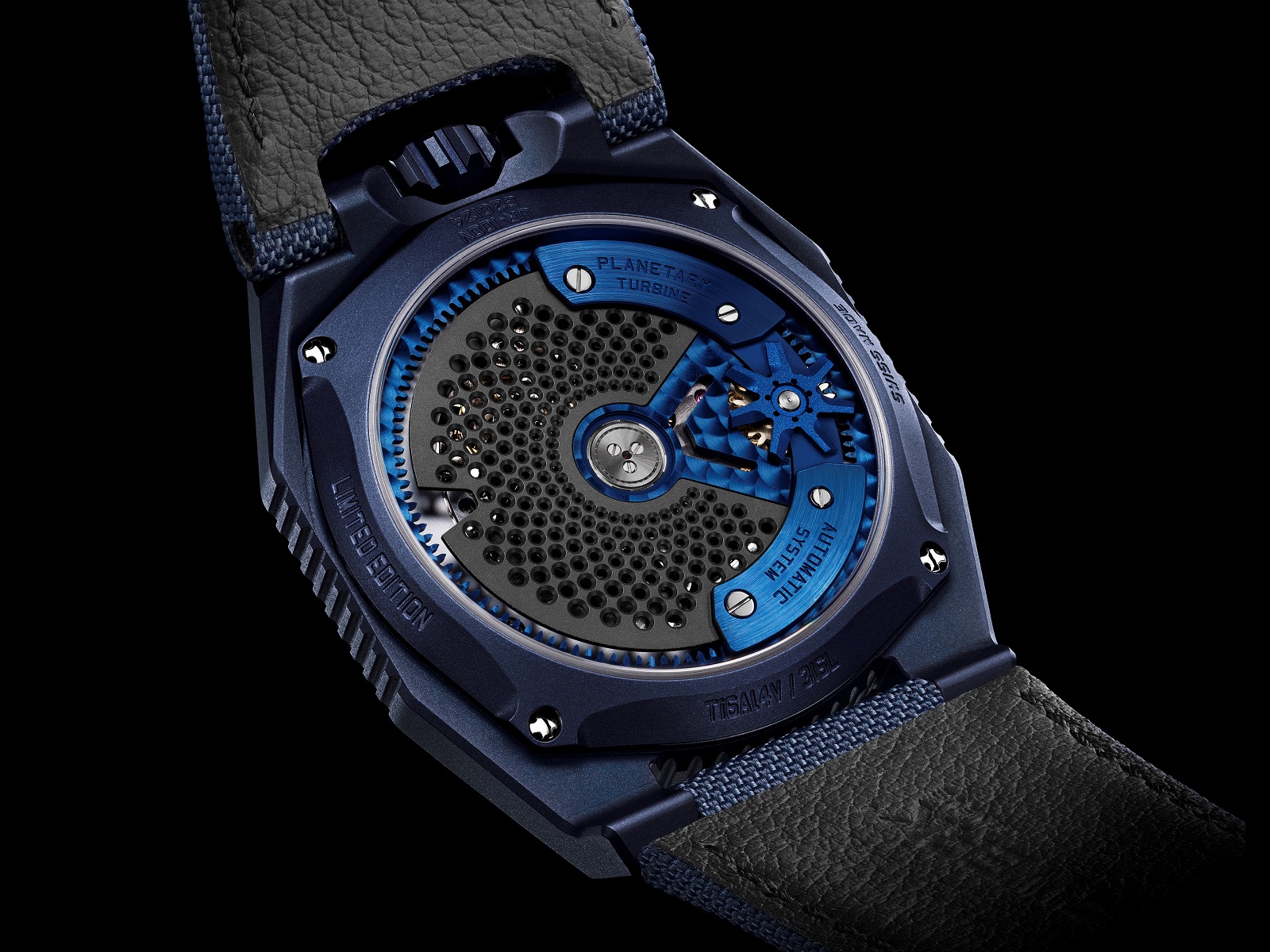