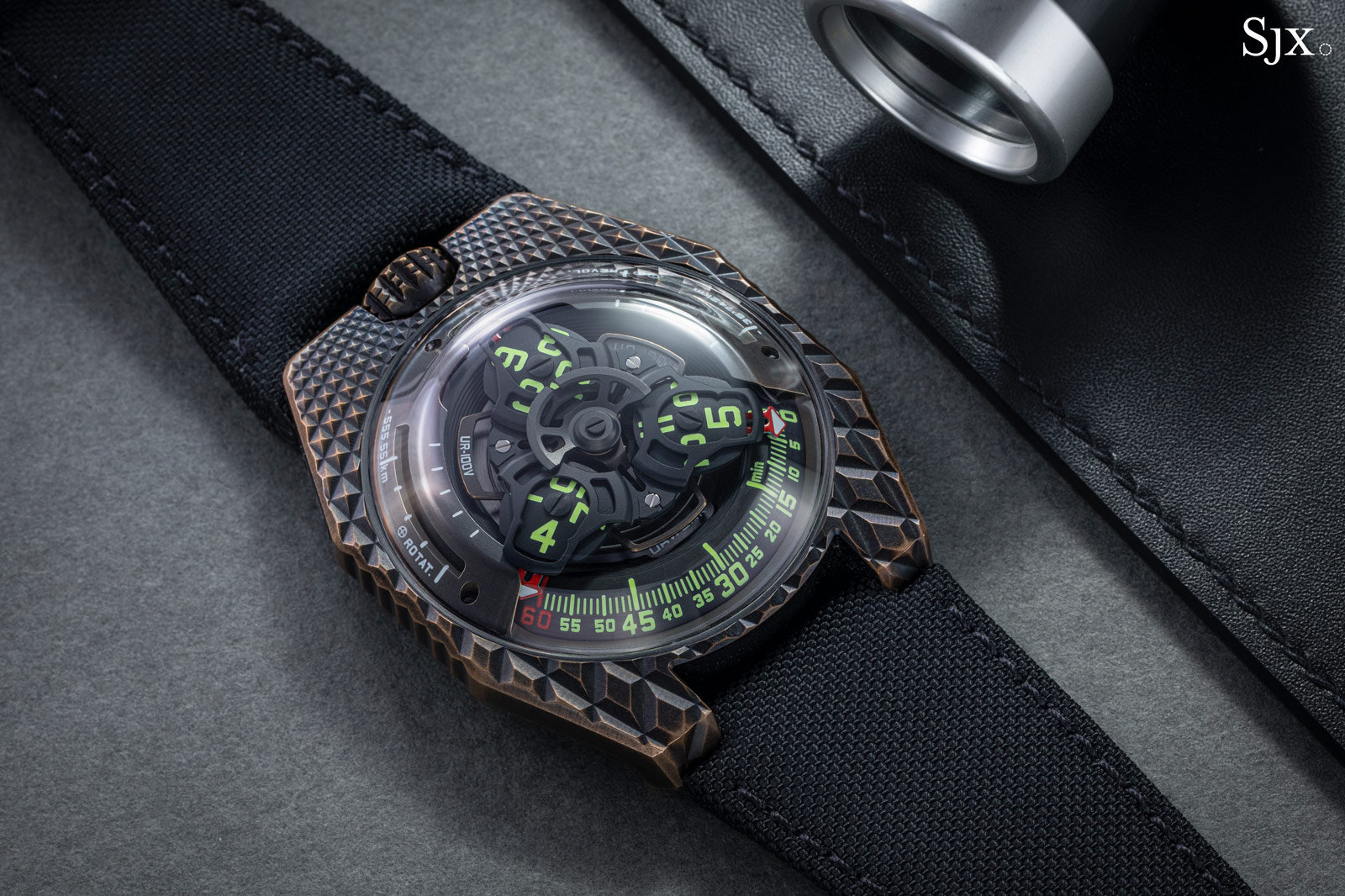 Urwerk lent me an example to wear for a couple of days – I was grateful especially since I got to compare it with the brand’s earlier, and heavier, models – and here’s how it went. 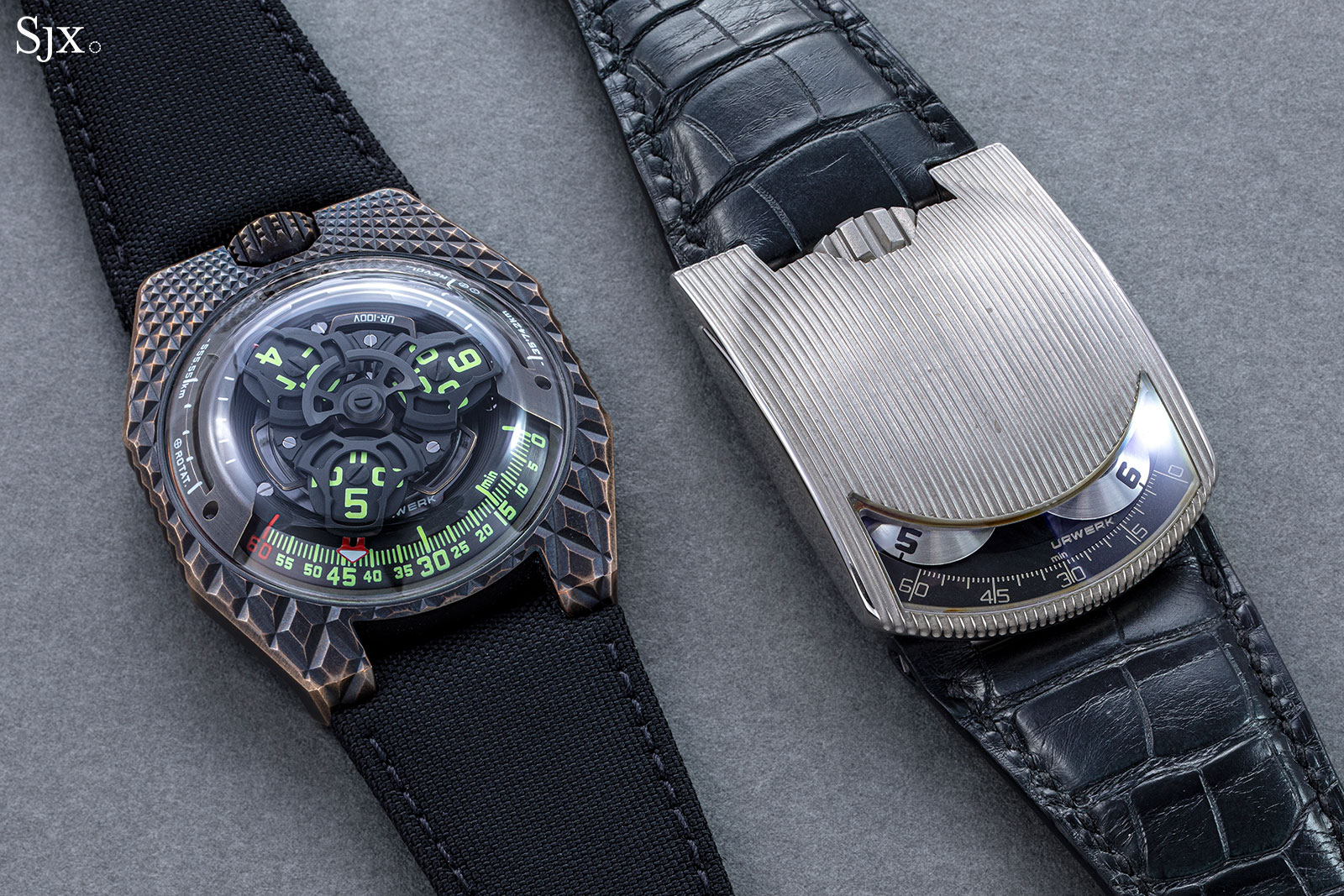 Reasonably compact, thin, and lightweight, the UR-100 is probably the most easily wearable Urwerk wristwatch to date. It’s also the closest to being a conventional watch – though it is still far from a conventional watch – which perhaps explains some of its wearability. And it is very wearable, particularly compared to precious-metal models. Not only is it light and manageable in size, the shape of the case back helps it sit better on the wrist. Being essentially the same watch, the T-Rex wears just as well as the other versions of the UR-100. Compared to most other Urwerk models, the UR-100 feels almost like an ordinary watch on the wrist. The recent UR-220 comes close because it is surprisingly lightweight, but it’s still a noticeably larger watch.

And the T-Rex is equally as functional as other Urwerk watches with the satellite-disc time display. It’s easily legible because the display is large and brightly coloured, but reading the minutes takes a while because the minute scale is tightly packed. 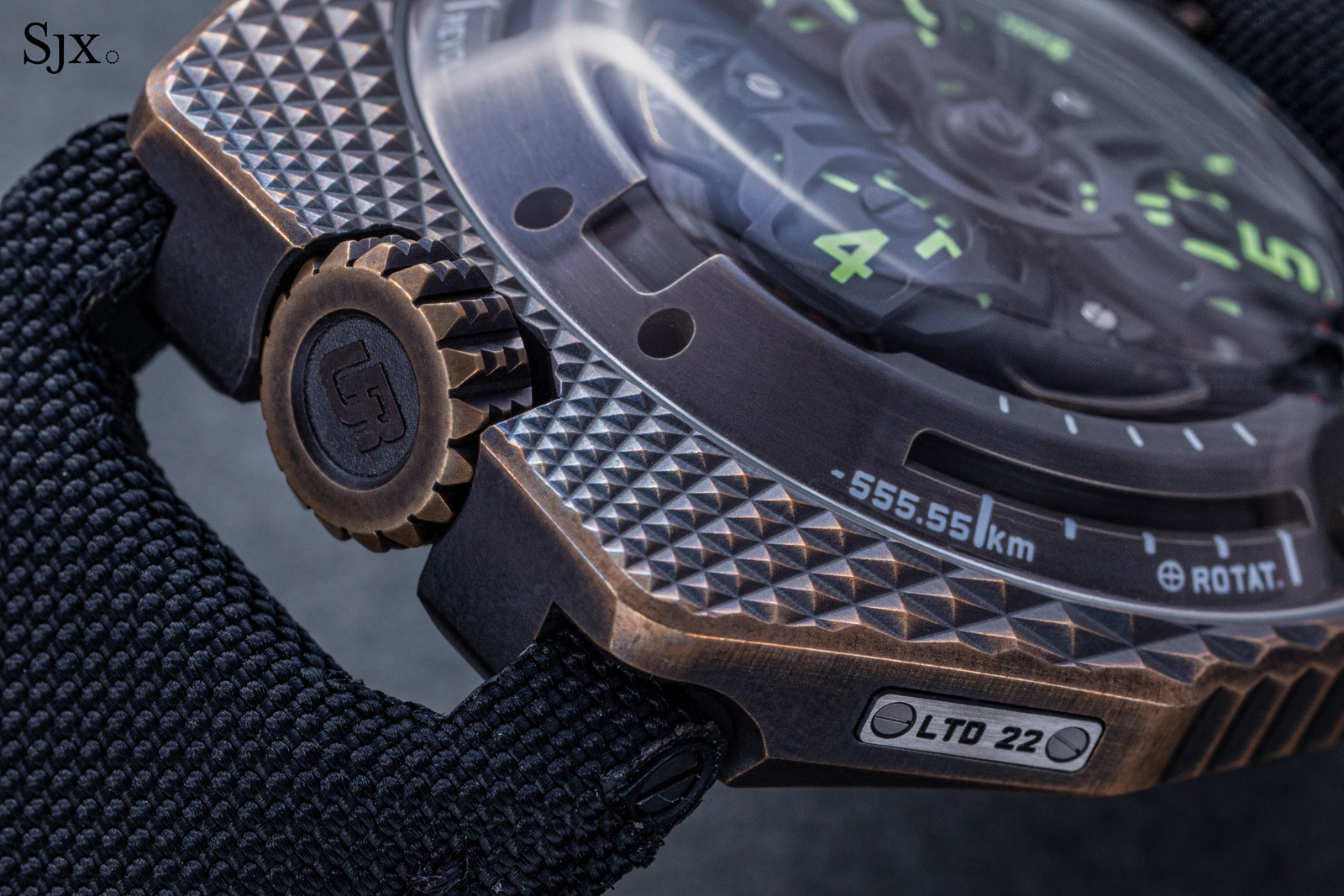 One thing that is lacking in the UR-100 in general is the “control board” that’s a signature Urwerk feature. While the control board on the case back typically contains indicators that are rarely used, it feels like a useful tool – and it certainly is cool.

In place of the control board is a display back that reveals the ultra-elaborate turbine rotor. It is novel, but the novelty does wear off, especially since it seems like a lot of show but still winds the watch in a largely conventional manner. 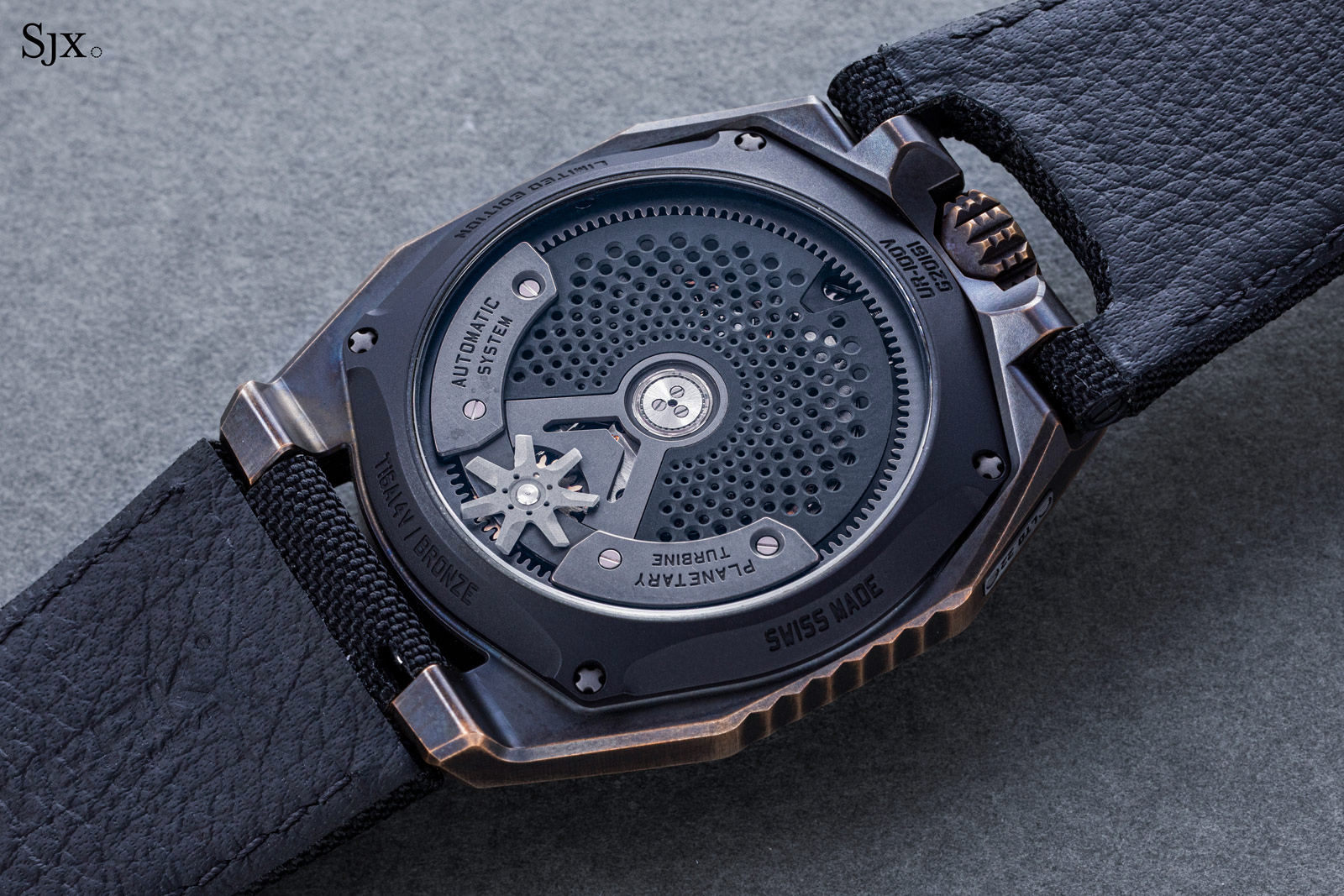 While not the most expensive variant of the model, the UR-100V T-Rex is certainly the fanciest visually. Its bronze case is finished with a pronounced hobnail, and treated to create a heavy, permanent patina.

I like the hobnail-patterned case – which does indeed bring to mind something primitive, creating an intriguing juxtaposition with the slightly sci-fi time display – but the patina feels a bit affected. That’s partly due to the fact that the patina is artificial and also indelible, which takes away some of the intrinsic appeal of untreated bronze.

For the first couple of days, or week or months, the T-Rex is probably more compelling than the other versions of the UR-100. But the cleaner aesthetic of earlier iterations will probably have more longevity in their appeal. The clous de Paris, or hobnail, pattern on the case has been used by Urwerk several times before, including on the red-gold UR-105. But the UR-100V T-Rex is the only second instance the brand has done it on bronze, after the UR-105 T-Rex.

Both no doubt get their name from the prehistoric aesthetic of the purposefully aged bronze. According to Urwerk, the bronze case is first milled – or mechanically engraved – to create the hobnail surface. While hobnail patterns on watches are typically linear or circular with identically sized projections, the pattern on the T-Rex is arches outwards while increasing in size away from the crown. 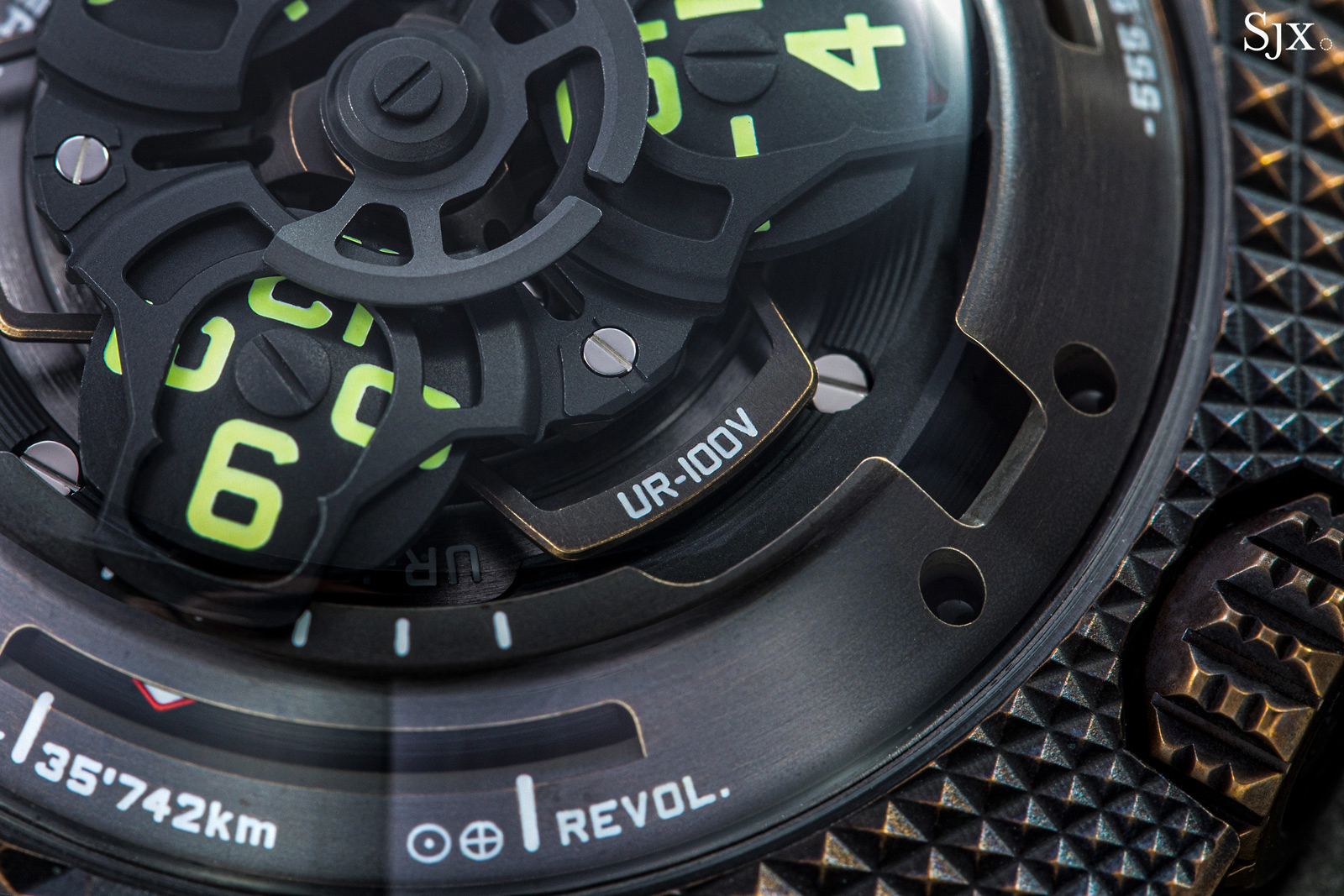 Once engraved, the case is blasted with tiny ceramic beads to create a matte finish, and then treated with chemicals and additional bead blasting, resulting in the patina. It’s essentially a two-tone finish of copper and black, and unlike the more common untreated bronze used for watch cases, this finish will hardly change over time.

Aggressively aged and slightly organic, the look is a departure from the typical Urwerk aesthetic that’s often a mix of sci-fi and Art Deco. I like the look though I imagine it might seem a bit much after extended wear. The nylon strap that is standard for the watch doesn’t suit its appearance, though that’s easily fixed, either with an aftermarket strap or something else from Urwerk’s own wide range. The case is 14 mm high, which is tall but not excessive; it’s a little thinner than a Rolex Sea-Dweller. But the case construction – a narrow case band with a domed crystal and back – makes it seem substantially thinner than it is. At the same time, the domed back also gives it good ergonomics.

Those factors contribute to the wearability, as does the relatively compact footprint. It’s still 41 mm wide, and a bit under 50 mm long, but it doesn’t feel all that large. The time display is very much an Urwerk classic. Urwerk didn’t invent the wandering hours – it’s well over 300 years old – but the brand certainly shepherded it into the 21st century.

Though the display on the T-Rex is more elaborate than on earlier models, it operates on the same principle – three satellite discs travel around the dial, with one indicating the minutes across a scale on the lower edge of the face. 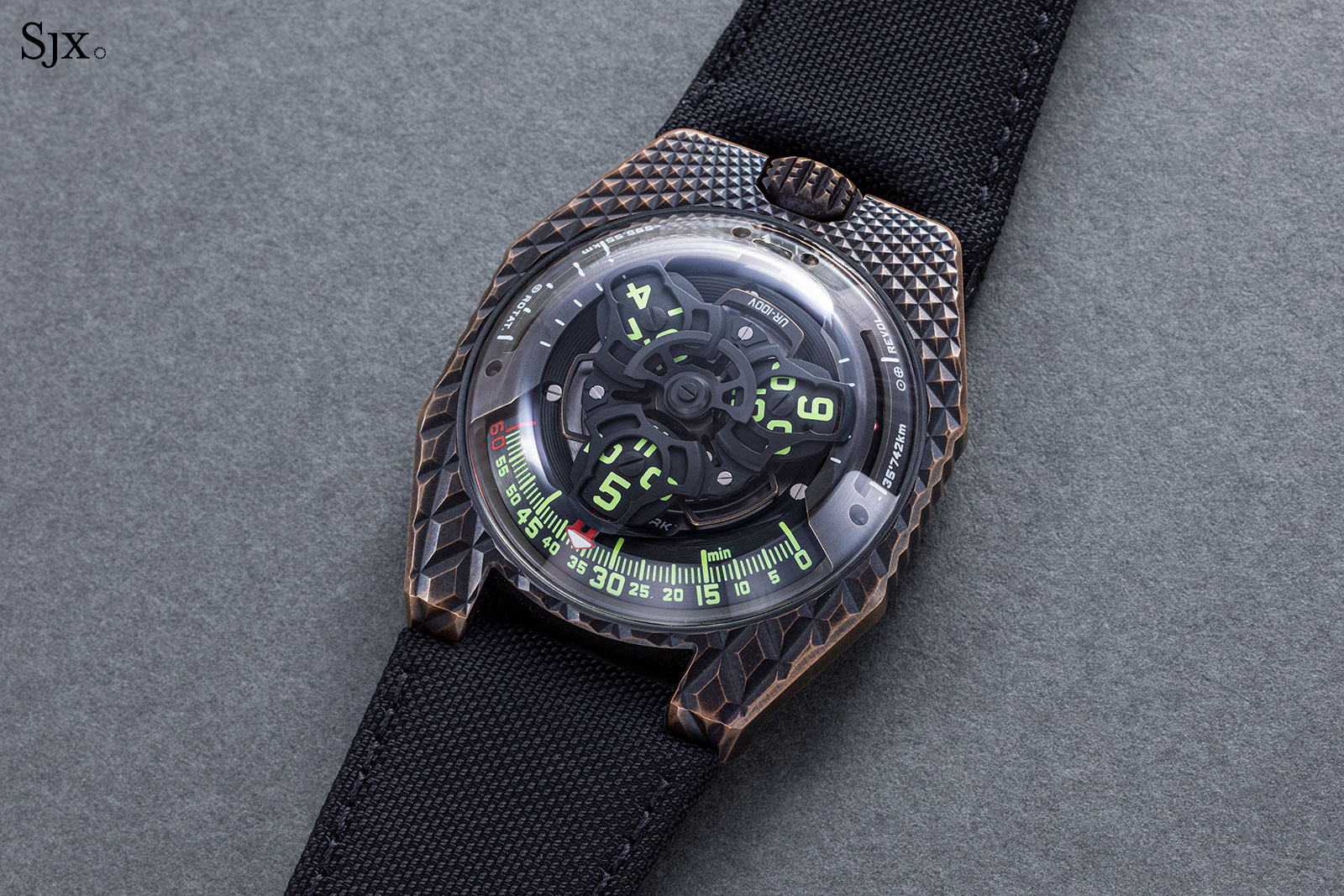 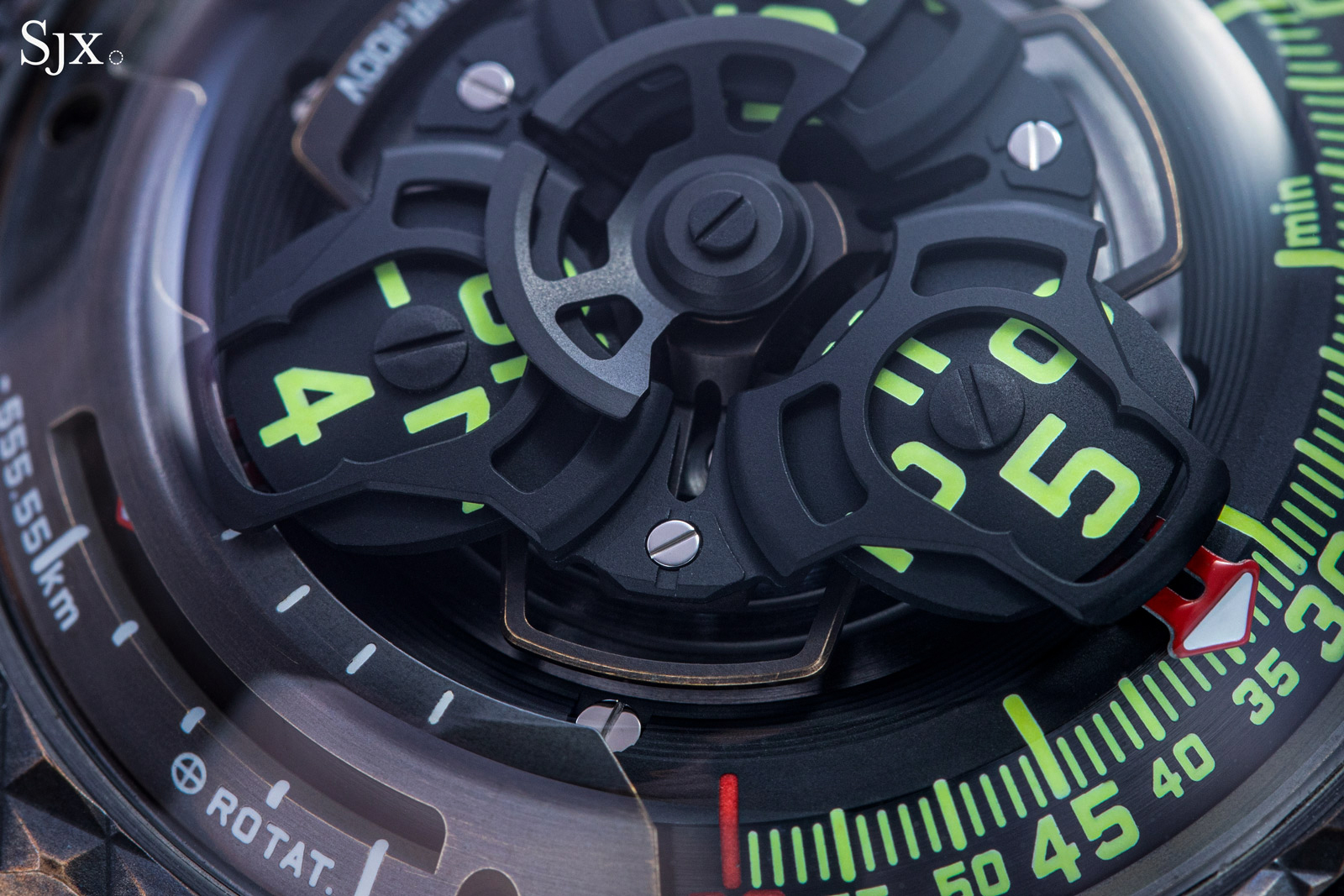 The cover over the satellite discs is black-coated aluminium

The hour numerals are enormous and easy to read, while the minutes are quickly approximated, but the exact minutes take a moment, because the track is finely scaled. 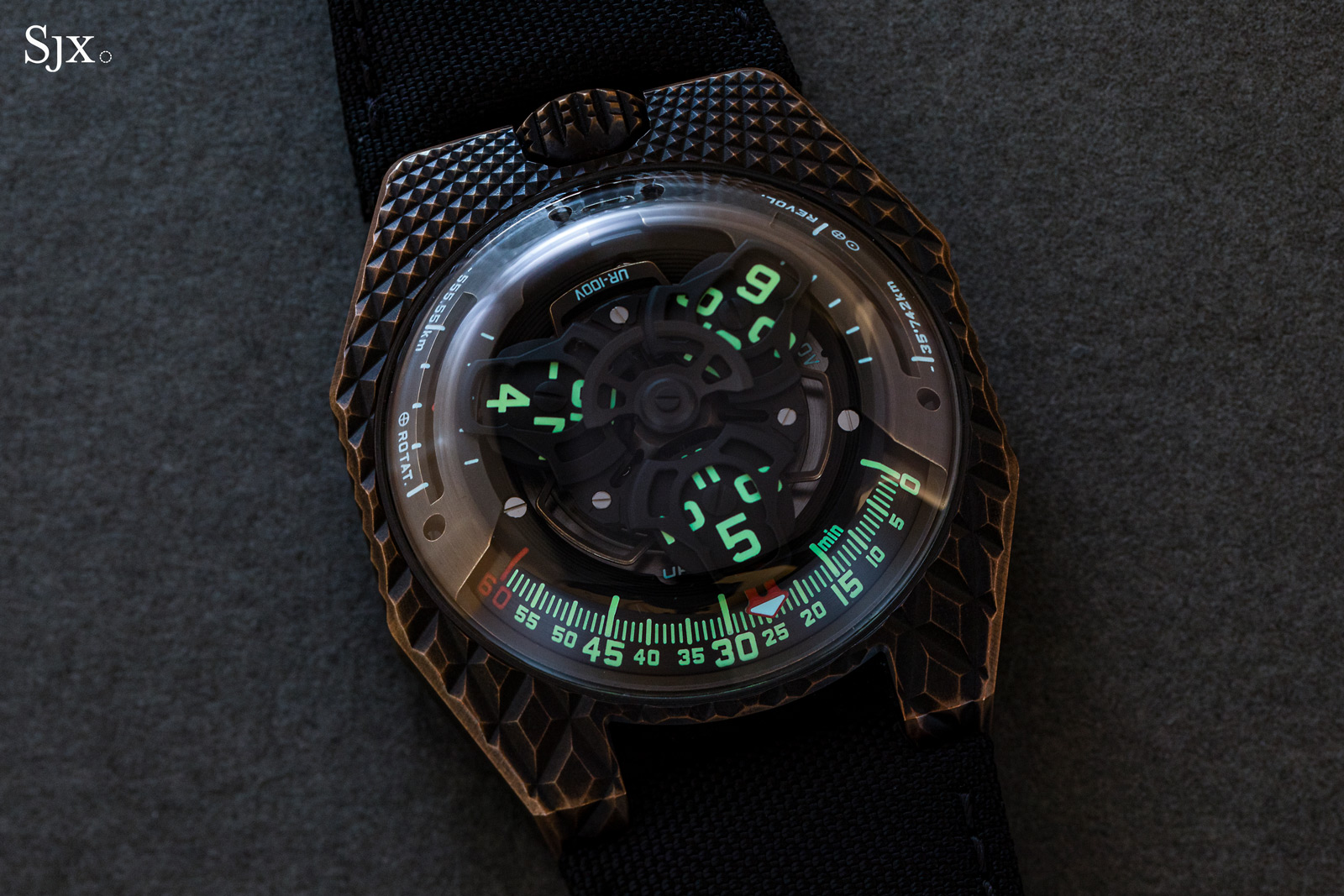 With lots of Super-Luminova, the dial is also highly legible in the dark

The T-Rex, and all other versions of the UR-100, also features two novel indicators. They are not additional functions, but additional scales that rely on the motion of the satellite discs to measure astronomical distances travelled over 20 minutes.

One is located at 10 o’clock – the Earth’s rotation on its own axis as measured at the equator, a rate of about 555 km every 20 minutes. And the other shows Earth’s orbit around the Sun, a distance of 35,740 km in 20 minutes. 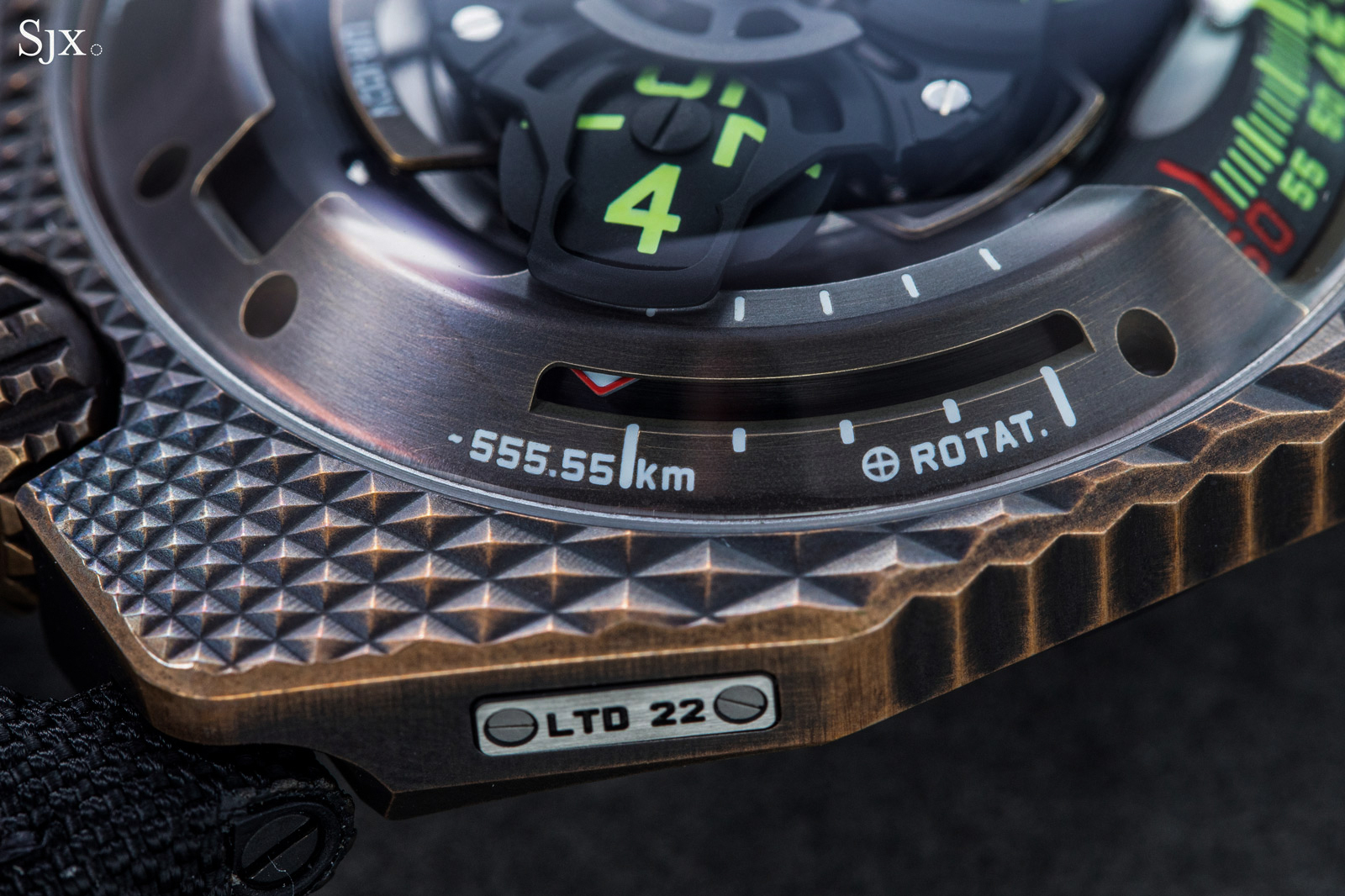 The speed of Earth’s rotation 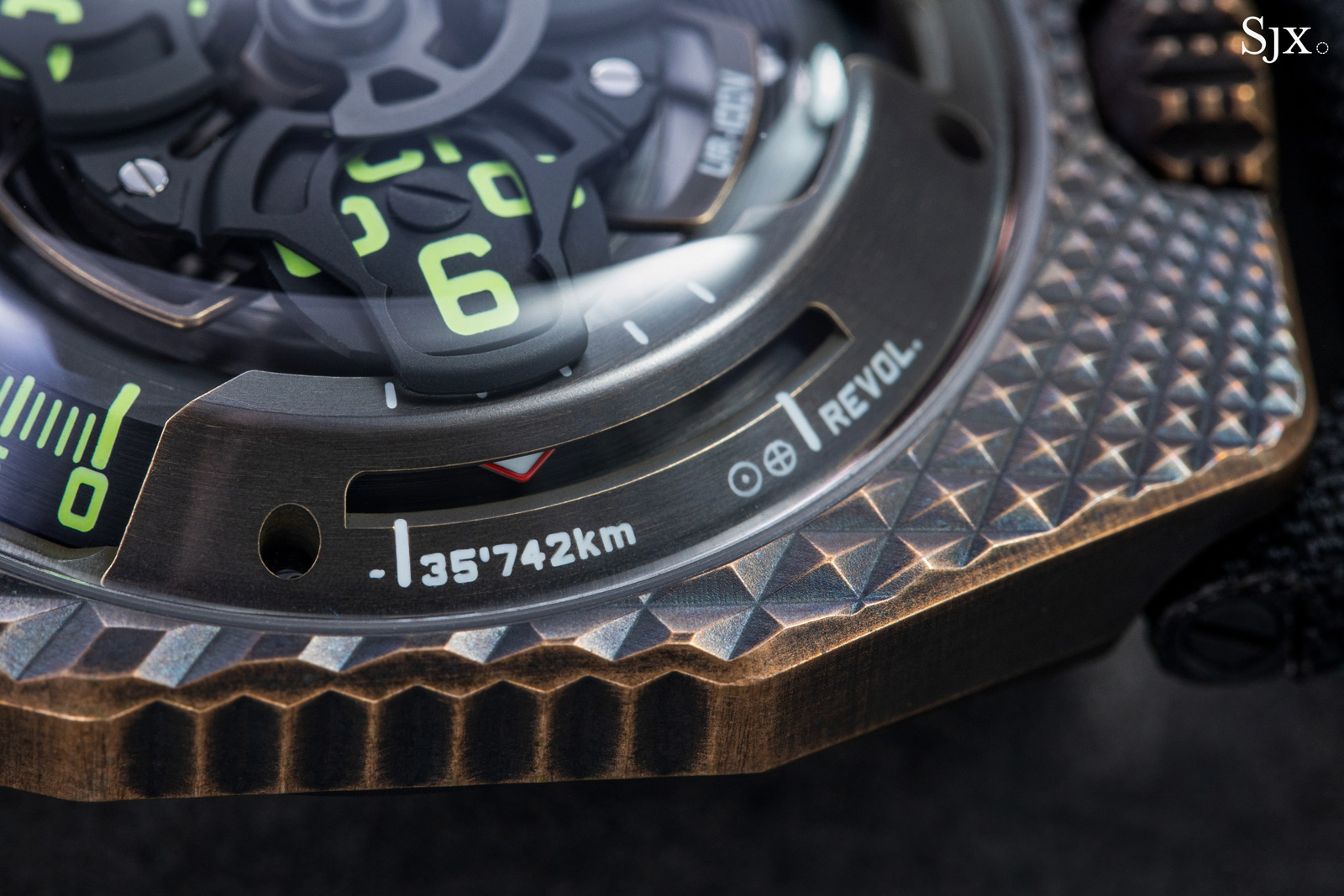 And its orbit around the Sun

Perhaps a philosophical reflection on the passing of time and mankind’s diminutive stature in the universe, the astronomical indicators are novel. They have no tangible function, and neither do they affect the aesthetics of the way.

I would prefer the markings for the twin scales to be in a colour closer to bronze, instead of white, so that they are less obvious, since they aren’t crucial to functionality.

The back of the watch looks drastically unconventional, but it is fundamentally identical to most ordinary watches. It’s a sapphire window that reveals the rotor sitting over the movement bridges, except that the rotor is a “planetary turbine automatic system”.

That means the oscillating weight functions like a conventional rotor, but it is regulated by a seven-toothed wheel that’s fixed against a smaller gear below that meshes with a large toothed ring on the perimeter of the movement. Its purpose is to moderate the motion of the rotor, so that it doesn’t spin too quickly.

It’s not necessary for the function of the watch, but it is visually interesting, and certainly works better with the design of the UR-100 than a standard, semicircular rotor. 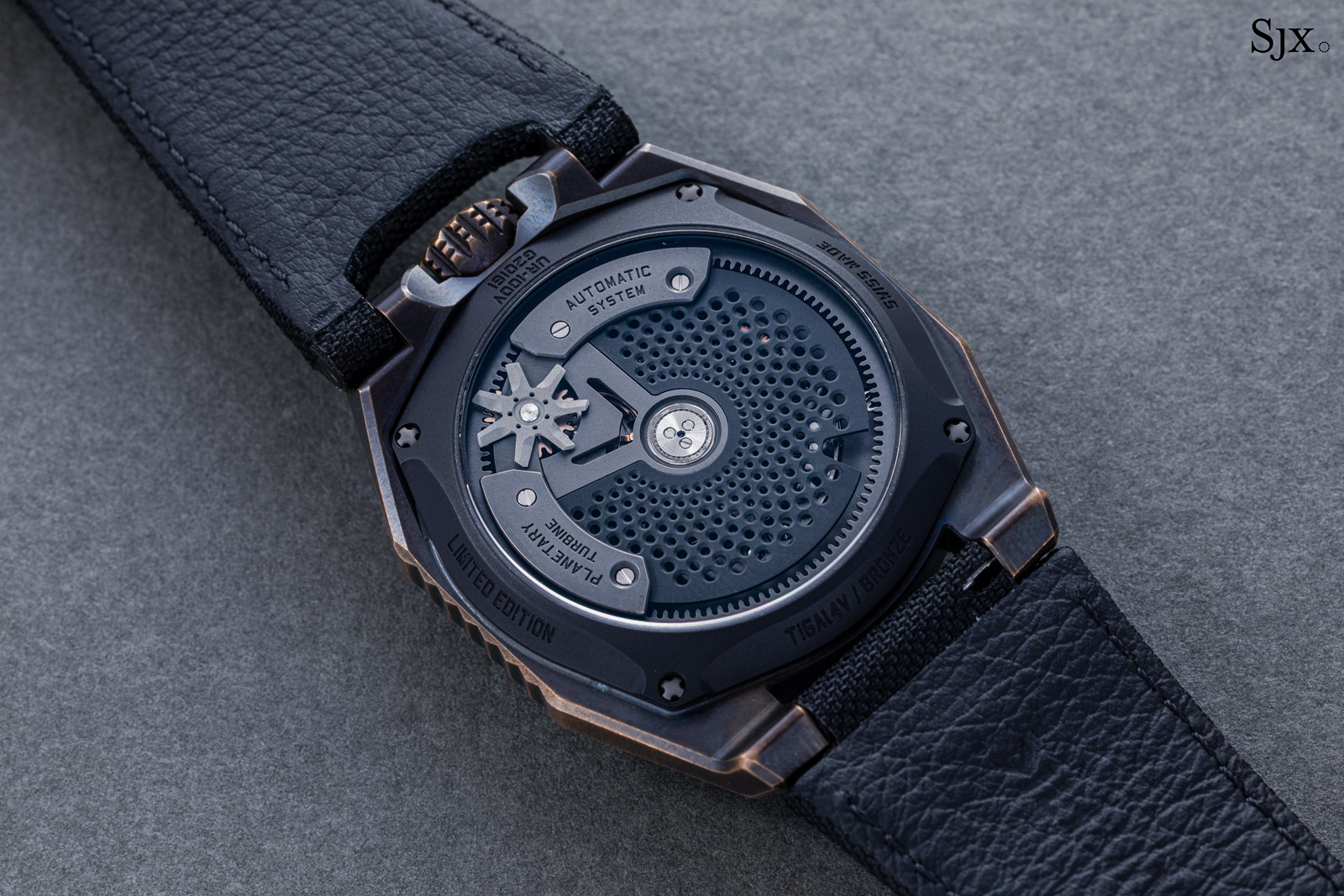 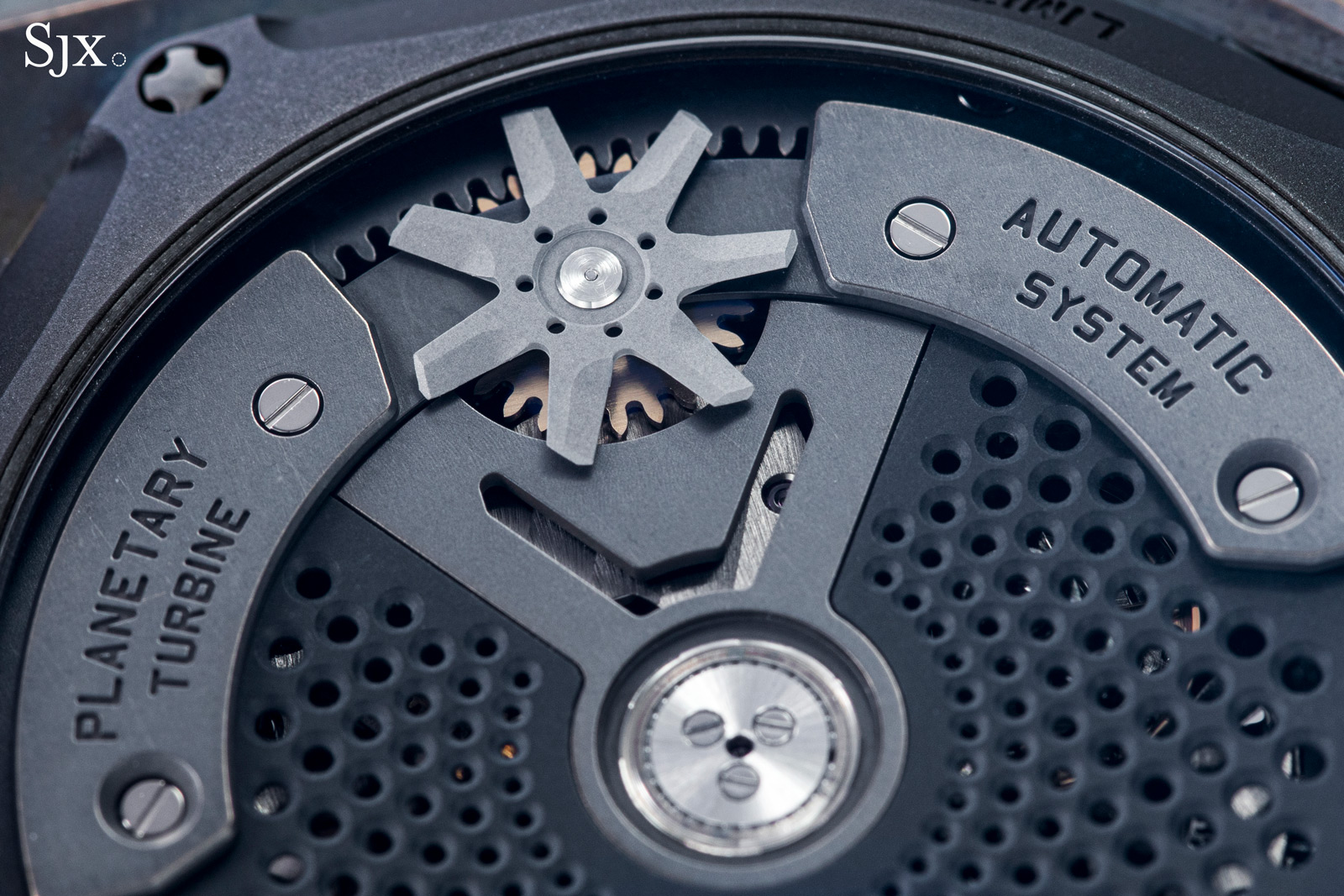 The turbine regulator with the weight plates on each side

The winding mechanism sits on a Zenith Elite. A well established calibre that was introduced in 1994, the Elite is reliable and the base movement for most Urwerk watches, including the manual-wind UR-220. 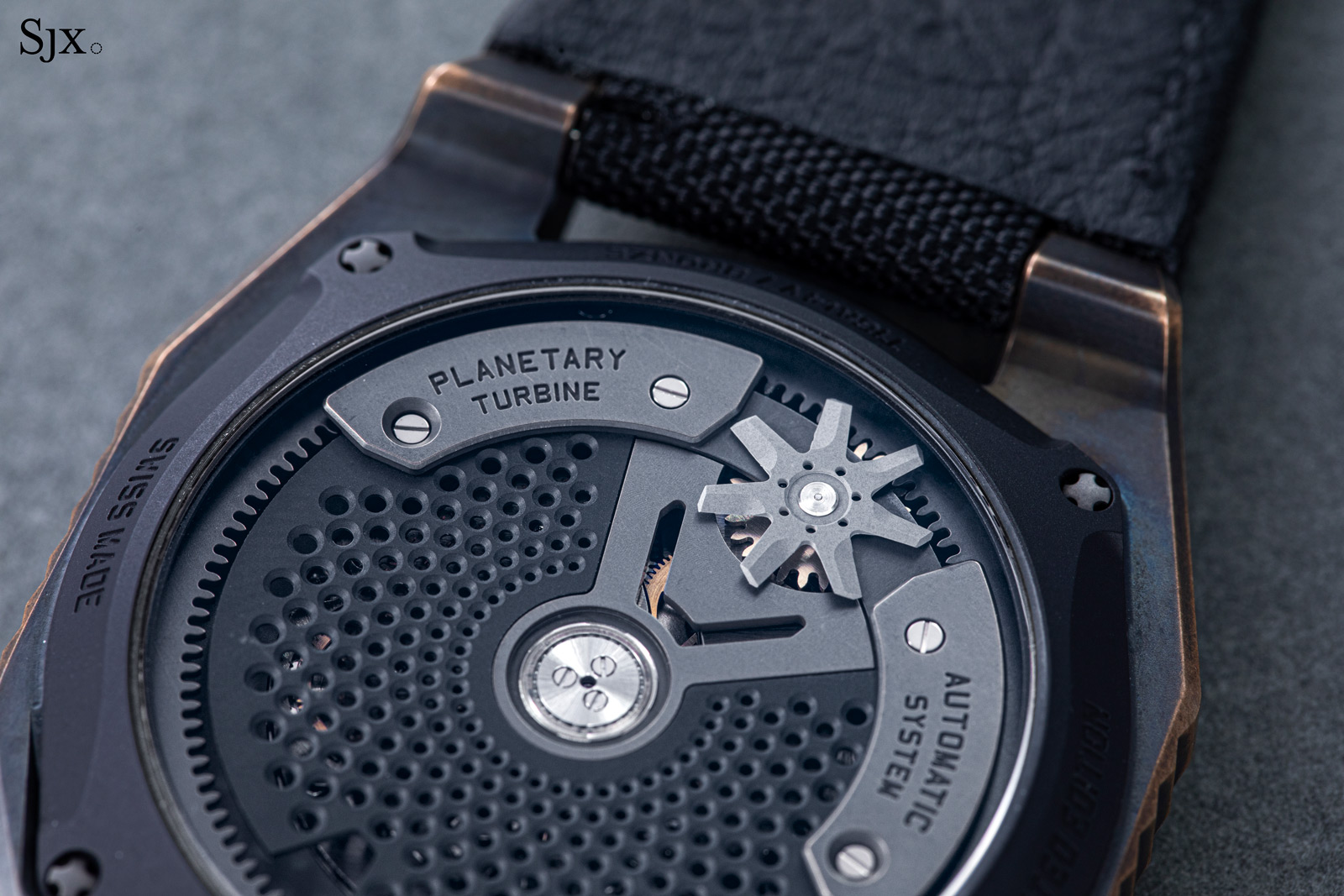 Though very much a quintessential Urwerk in terms of complication and design, the T-Rex offers a very different look because of the case material and finish. I personally prefer Urwerk’s traditional sci-fi style, the aesthetics of the T-Rex are a good thing for anyone who wants something different from its standard fare.

Inspired by an ancient beast.

Looking like a weapon from Game of Thrones, the UR-105 T-Rex is Urwerk's latest creation, but one that harks back to the brand's origins. We go up close with the T-Rex, complete with original photos and pricing.