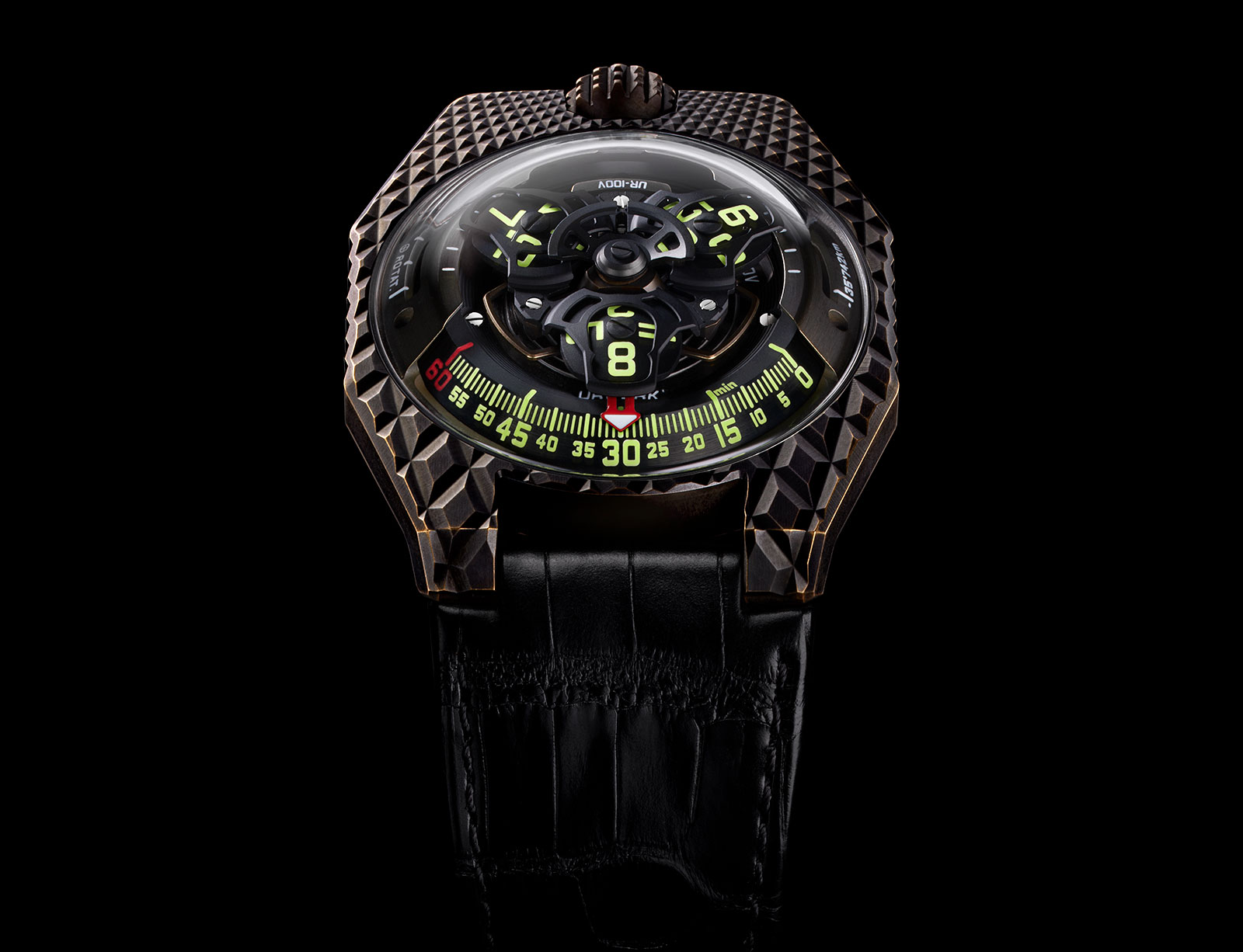 Synonymous with avant-garde watchmaking, Urwerk’s best-known complication is its reinterpretation of the centuries-old wandering hours, executed in both two- and three-dimensional motion.

Just over a year ago, Urwerk unveiled the UR-100 SpaceTime, an easily-wearable, entry-level iteration of the satellite-disc wristwatch. Now the brand has taken the covers off the UR-100V T-Rex. Perhaps the most interesting version of the UR-100 to date, the T-Rex has an aged bronze case covered in a pronounced hobnail pattern that evokes the Tyrannosaurus rex. 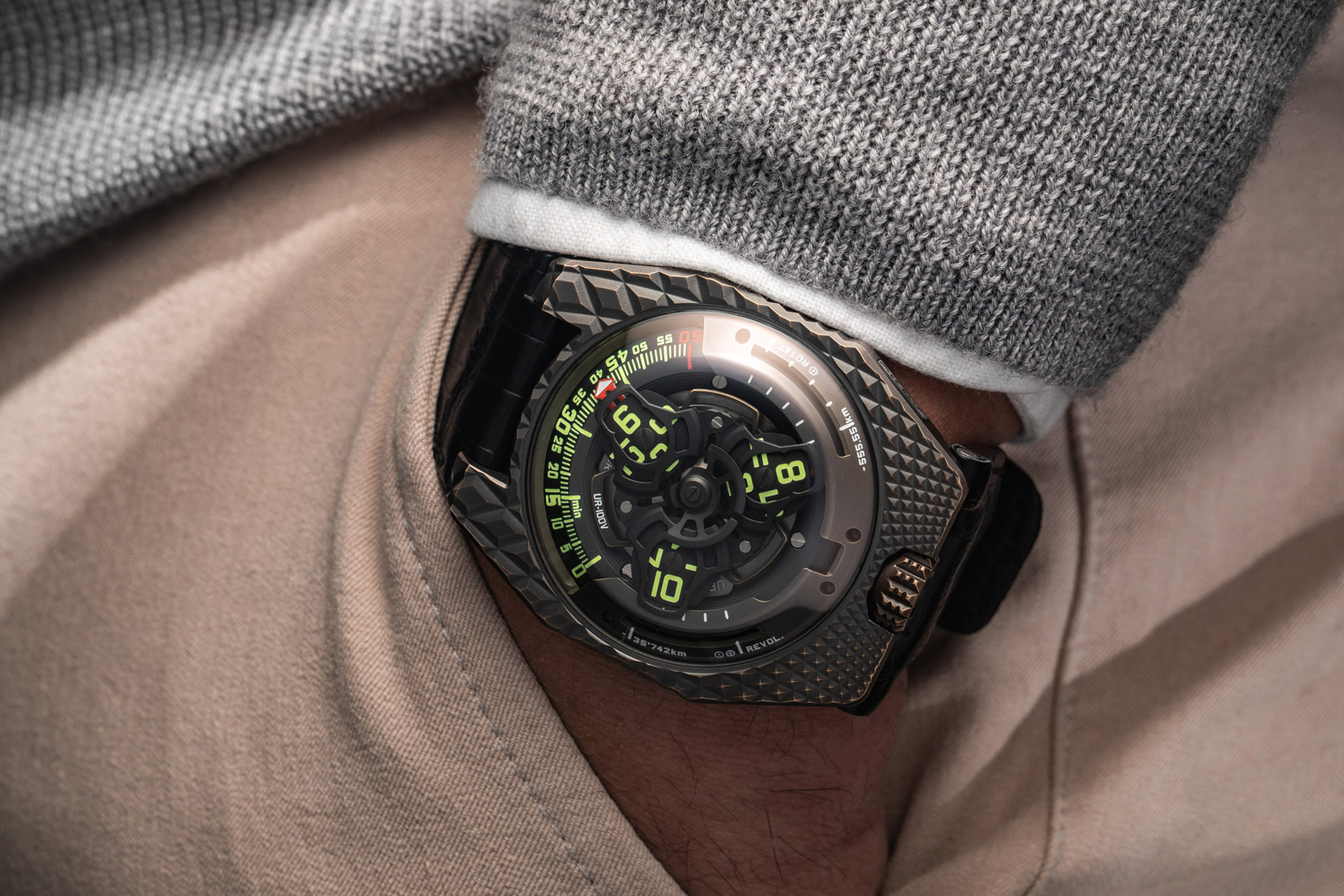 Still original despite being some two decades old, the satellite hours remains the brand’s forte. And the UR-100 is arguably the most compelling version of the watch in recent year, being both the most affordable and wearable. That probably explains why the UR-100 has sold well, resulting in the brand rolling out several variants in a short span of time, ranging from basic version in steel or titanium to the top of the line model in 18k yellow gold.

But the UR-100 is at heart a pared-back design, simpler in form than the brand’s early watches, which are mostly more elaborate in the case construction. So the milled scales on the bronze case of the T-Rex sets it apart from other UR-100s – both in aesthetics and tactile feel – giving it an edgy look that makes it perhaps the most captivating version so far. 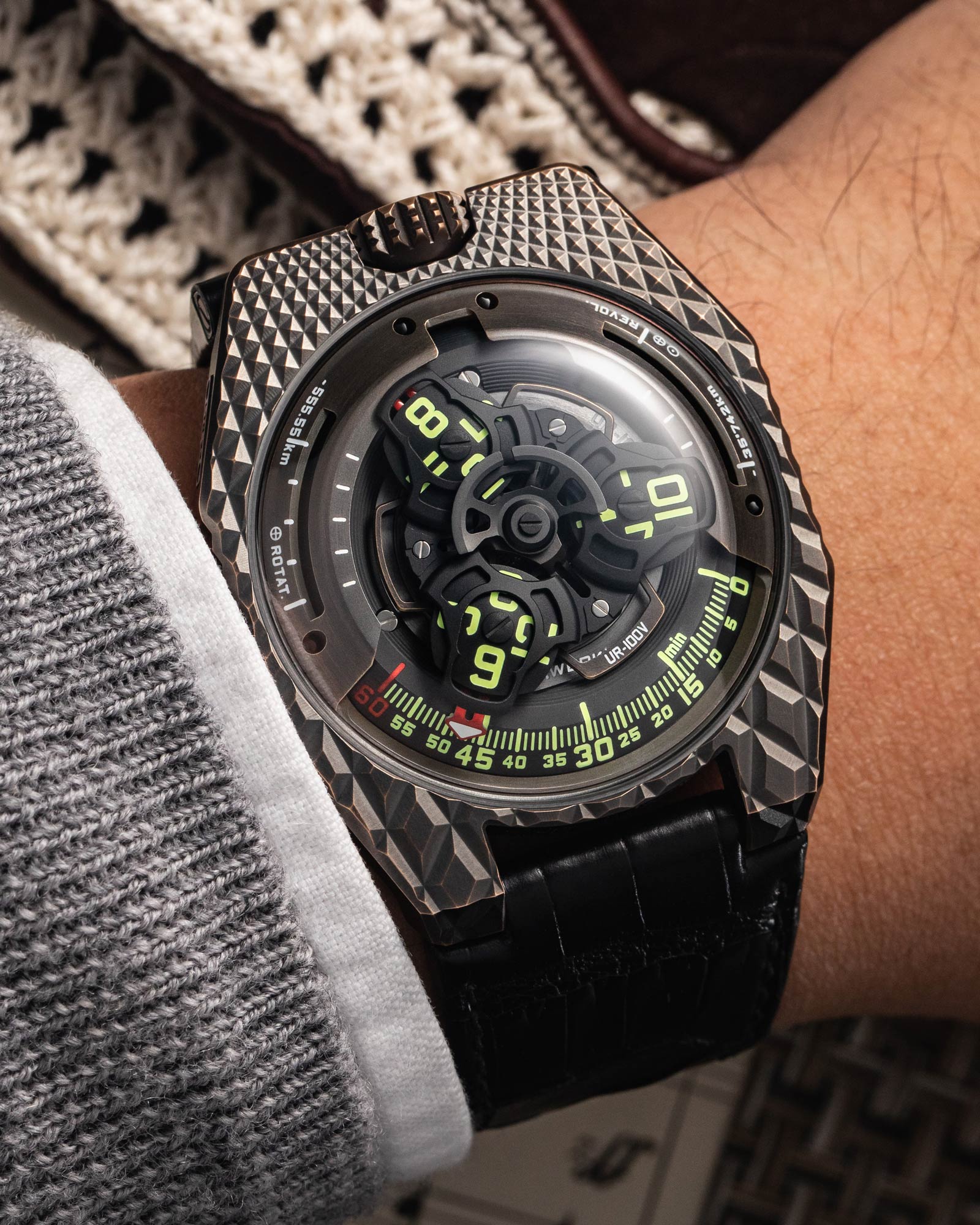 This isn’t the first time Urwerk has clad one of its watches in a dinosaur-hide pattern – the UR-105 T-Rex of 2016 has that distinction – making the livery less novel, but the pattern is executed well and the result looks cool.

And the UR-100V T-Rex is priced well, being about 20% cheaper than the UR-105 version, and only 5% over the base model UR-100 in steel. Add in the fact that it’s a small, 22-piece run – even the all-gold UR-100 edition was 25 pieces – it’s a no-brainer for someone who already likes the standard version but wants something more unusual.

Several elements of the case have been tweaked to evoke the skin of the ancient reptile. The most obvious is the case – bronze that’s been milled to create a graduated hobnail pattern with a grain that increases in size from top to bottom. After the pattern is complete, the case is then sandblasted to give it a matte finish before a patina is created via a combination of polishing and chemicals. Both the crown and dial are  treated to echo the dull brown of the case, while the crown is also milled to create serrations that match the pattern of the case. 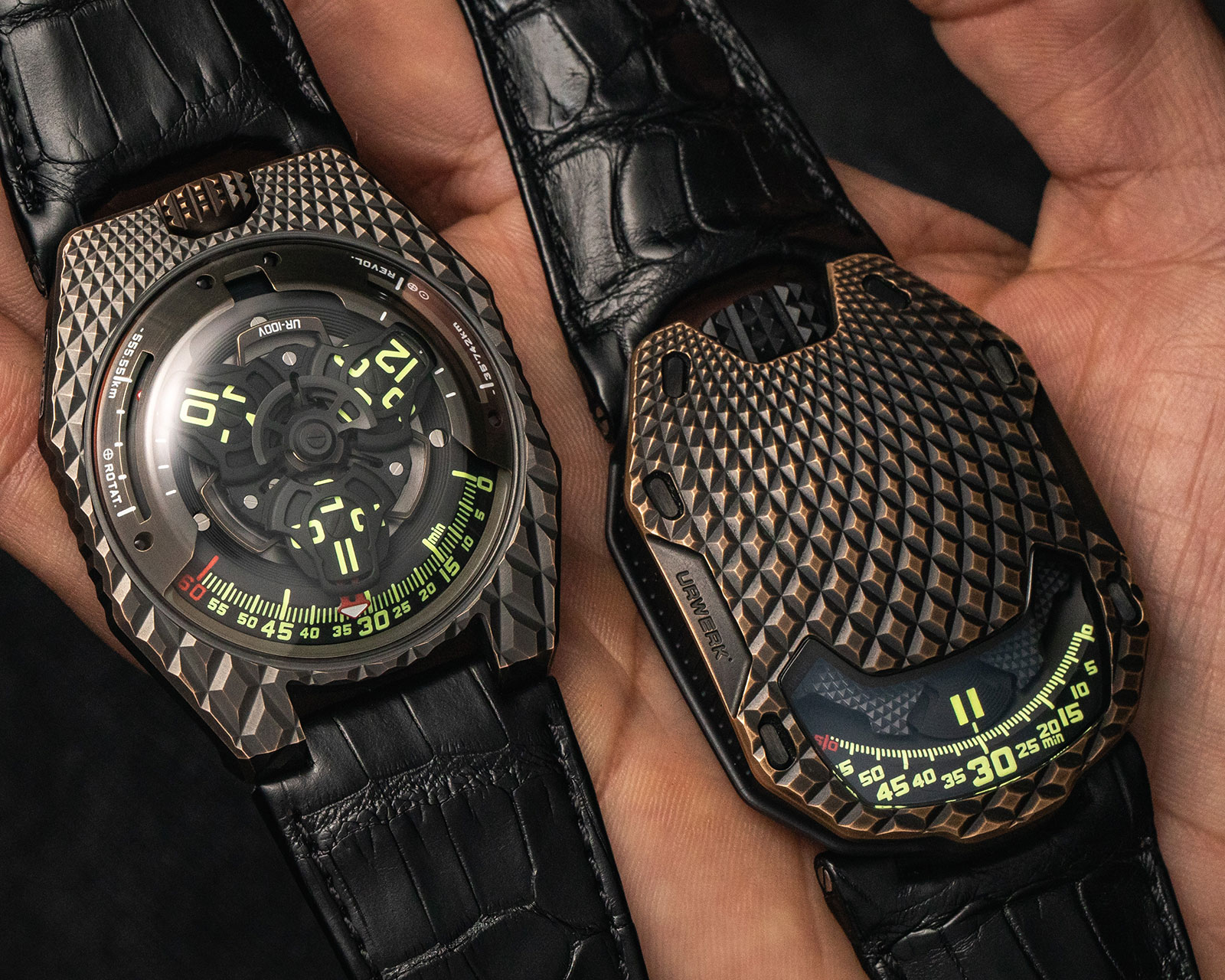 Unlike the original UR-105 T-Rex that had a hobnail cover for the satellite discs, the dinosaur-hide pattern on the new UR-100 does not extend from the case to the dial. That’s because the dial features twin celestial indicators at two and ten o’clock, which respectively display the distance travelled by the Earth rotating on its own axis, as well as the distance travelled when it orbits the sun.

Like the celestial displays, the turbine rotor on the back that regulates the winding efficiency is not practical but it is visually interesting, adding some mechanical action to the back. 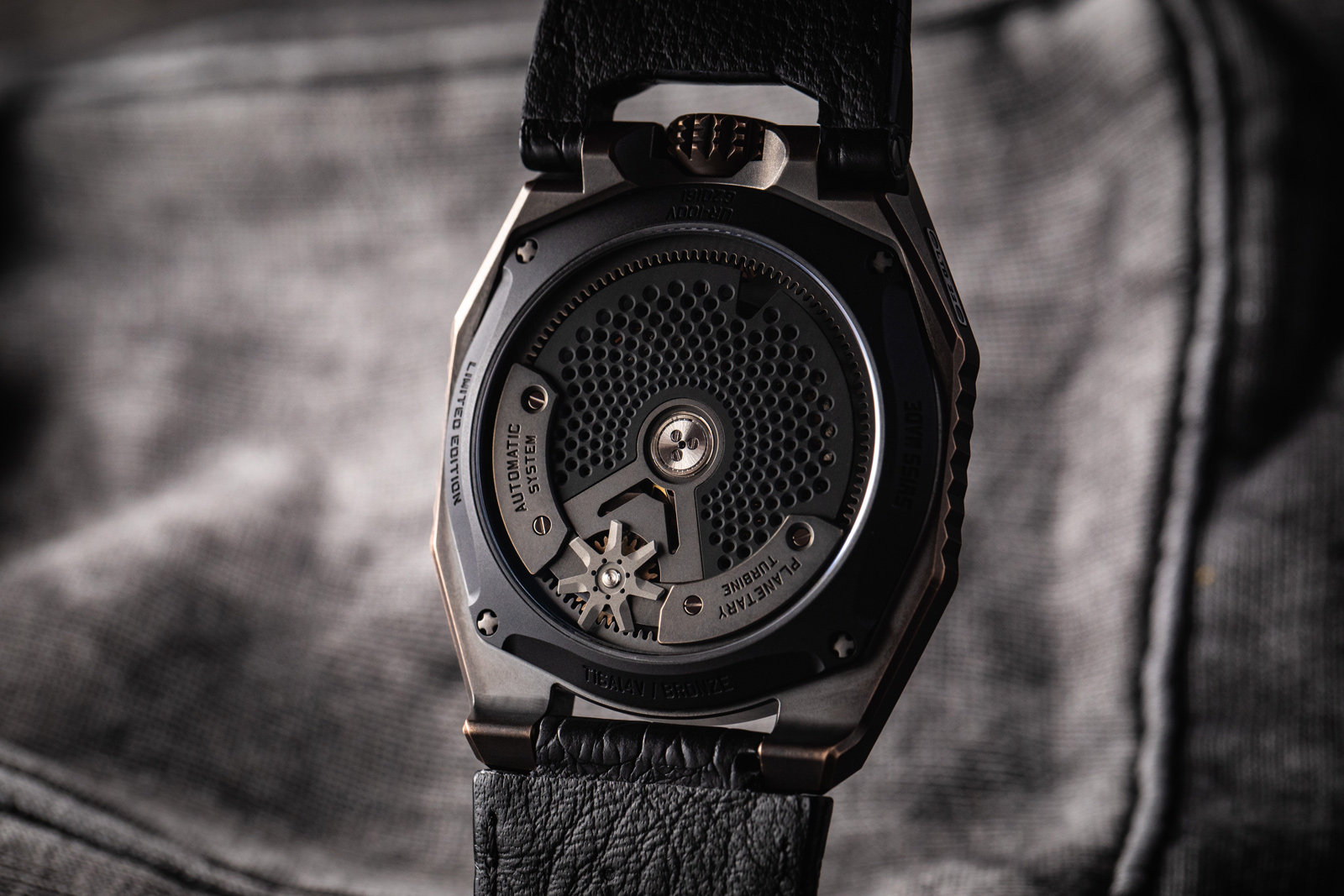