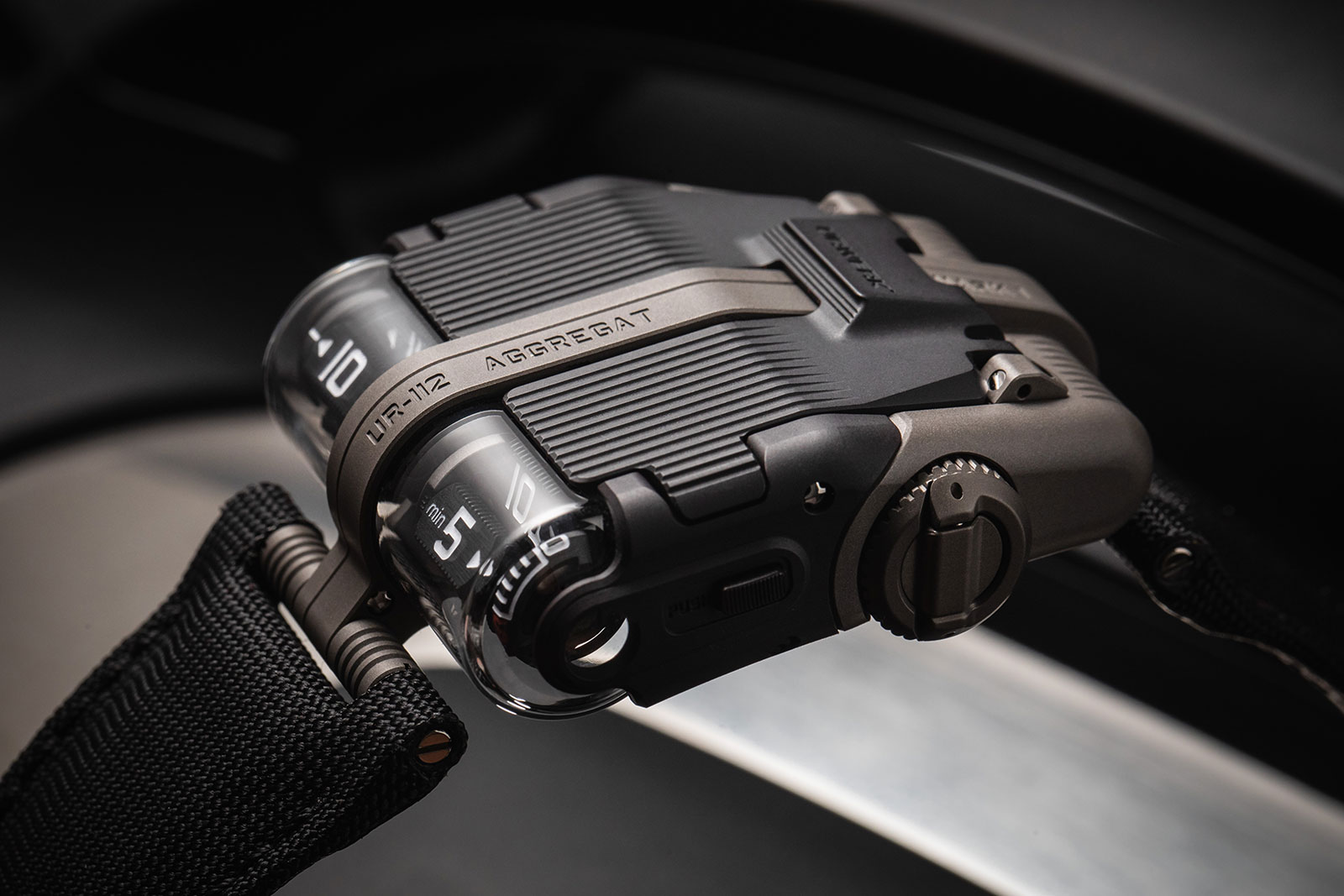 For some two-and-a-half decades, Urwerk – along with a handful of other independent watchmakers – has been at the cutting edge of the the presentation of time.

While the three-dimensional, satellite-cube hours has long been its trademark complication, Urwerk has nevertheless continued to evolve its mechanics, resulting in similarly futuristic watches such as the UR-111C with its linear time display on a rotating drum. And its latest invention is perhaps the brand’s most notable since the debut of the satellite cube display.

A followup to the UR-111C, the UR-112 Aggregat retains the same form as its immediate predecessor, and continues to display hours and minutes displayed in a pair of glass cylinders. But the UR-112 is more complicated, with the hours and minutes indicated by swivelling prisms. And its case has an aggressive, military feel that brings to mind the Tumbler of Christopher Nolan’s Dark Knight films. 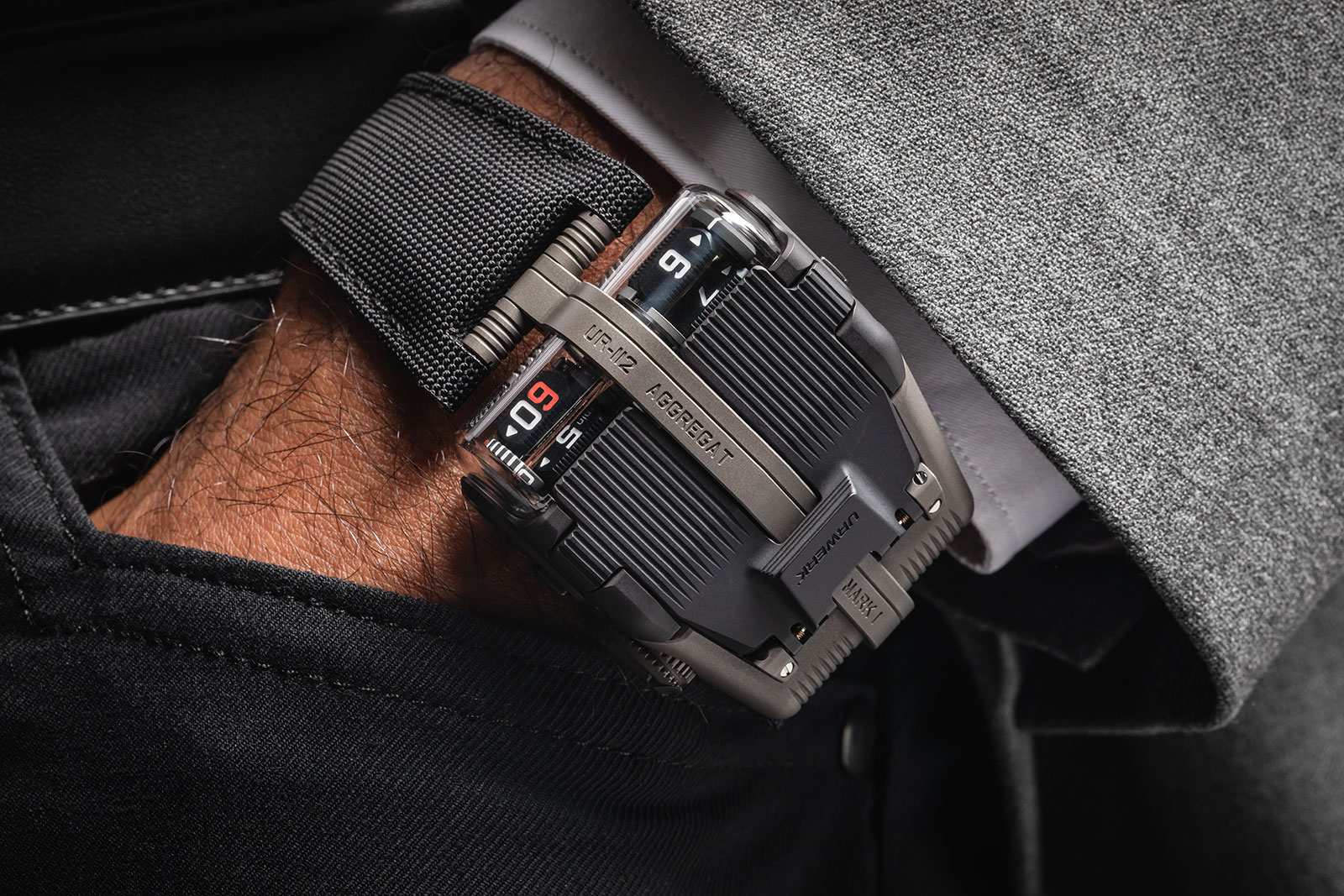 As the UR-112 is part of the Special Project Collection – the models within are essentially one-off production runs – it is disconnected with Urwerk’s recent inclination towards slimmer, streamlined designs.

The UR-112 is an appealing and intriguing example of watchmaking, and very much typical of Urwerk. Importantly, it is impressive yet unpretentious – it does not replicate past designs, nor does it try to be fashionable. 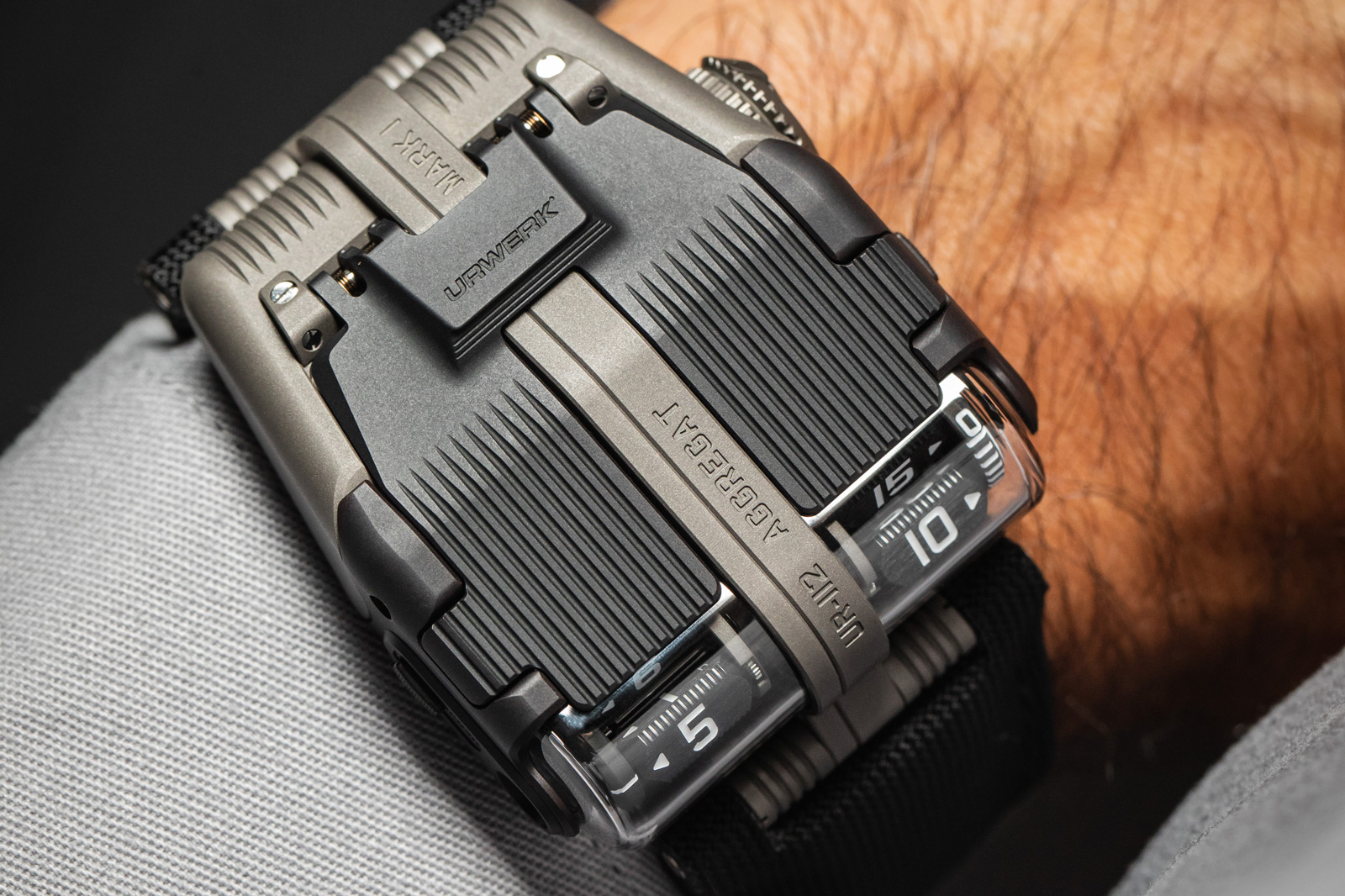 Notable for being entirely digital with its time display, the UR-112 indicates the the hours and minutes via satellite prisms, while the seconds is a simple, constantly rotating disc with numerals attached to it.

Admittedly the UR-112 is arguably less complicated than benchmark digital watches – which are all of the classical sort – most notably the Lange Zeitwerk, which incorporates a constant force mechanism. But the UR-112 is still extremely complicated, and it is presented in an avant-garde manner.

Though it is pricey at about US$270,000, even when compared against Urwerk’s higher-end timepieces or even the preceding UR-111, though it’s still priced lower than the original Special Project model, the UR-CC1 “King Cobra” of 2009. Of the three, the UR-112 is no doubt the most sophisticated in terms of mechanics and style. And it will probably sell out because it’s a small run of just 25 pieces. 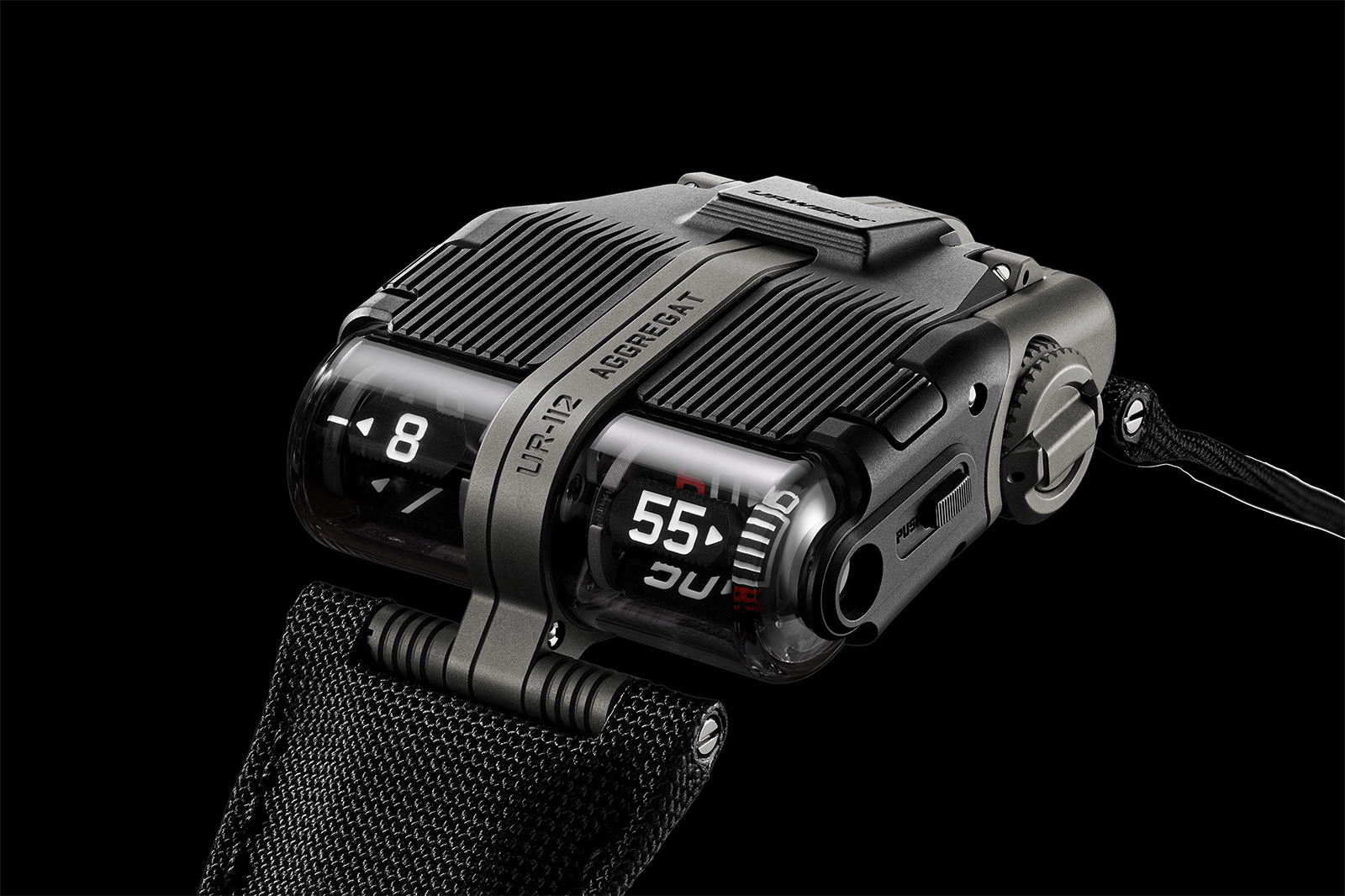 The hours and minutes are displayed on the lower front of the case within two sapphire cylinders that are separated by a spine, a design detail inspired by the grill of the Bugatti Type 57 Atlantic coupe.

On the left are the hours, which are indicated by four prisms circling a central shaft, each made up of three faces bearing hour numerals. 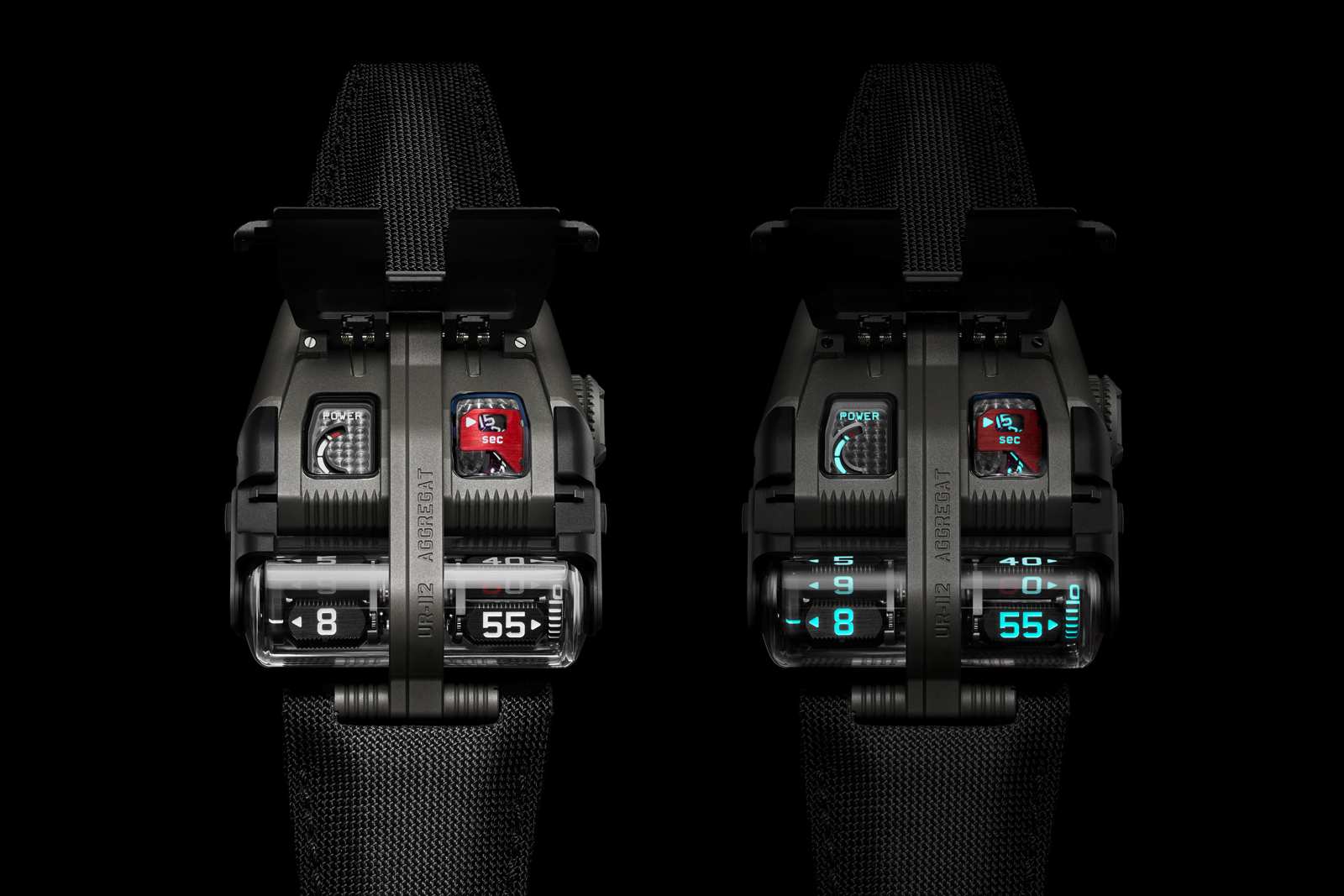 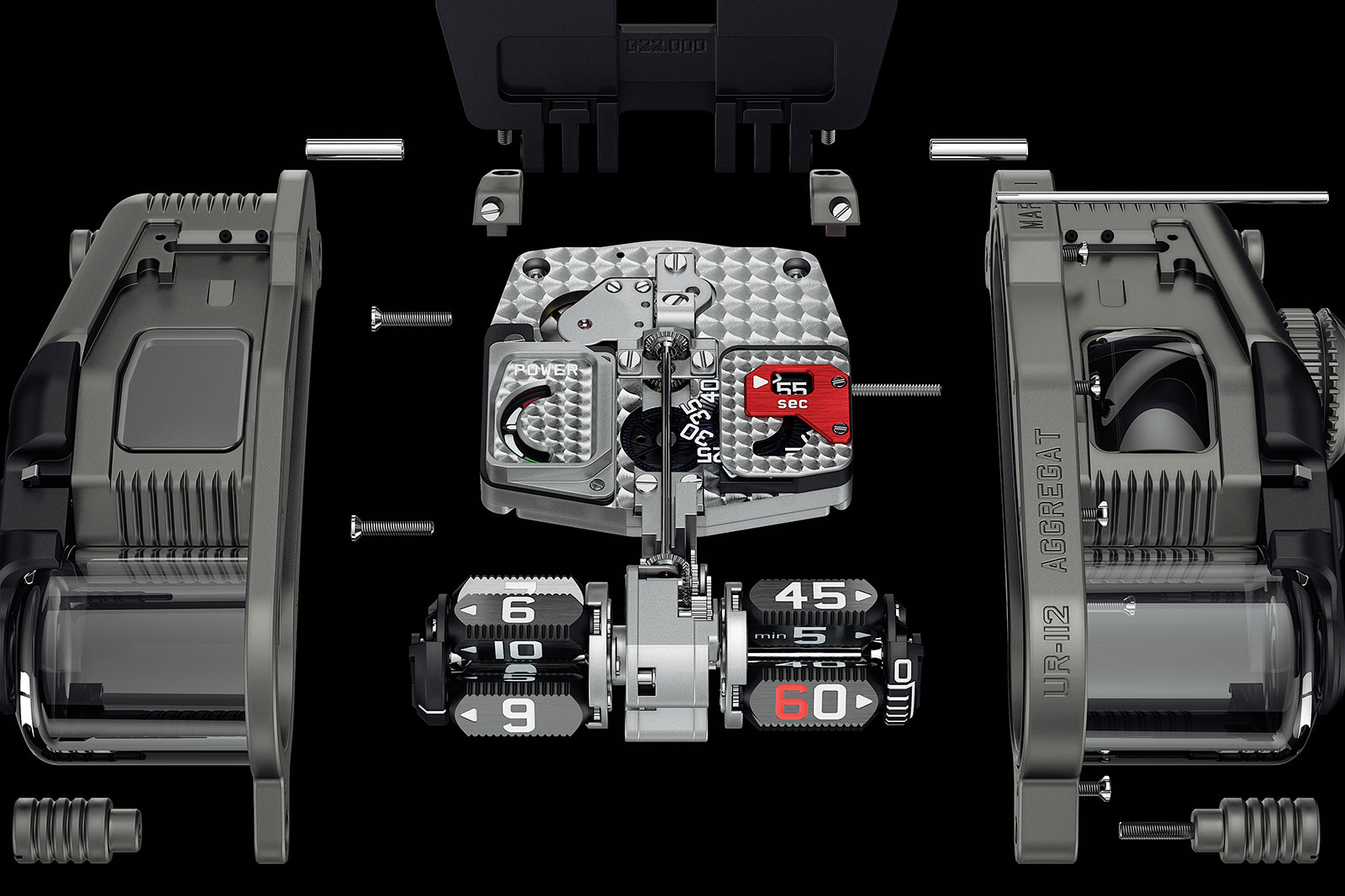 An exploded view of the case, which separated into two halves with the movement sandwiched within

The four prisms complete one rotation around the central shaft every four hours, while each prism rotate around its own axis once every 12 hours. In other words, the consecutive hours are displayed by different prism, and it takes three cycles to go through 12 hours, which means a full day is six cycles of rotation.

Notably, the hours display jumps at the top of the hour, which will make it fascinating to observe given the three-dimensionality of the prisms. 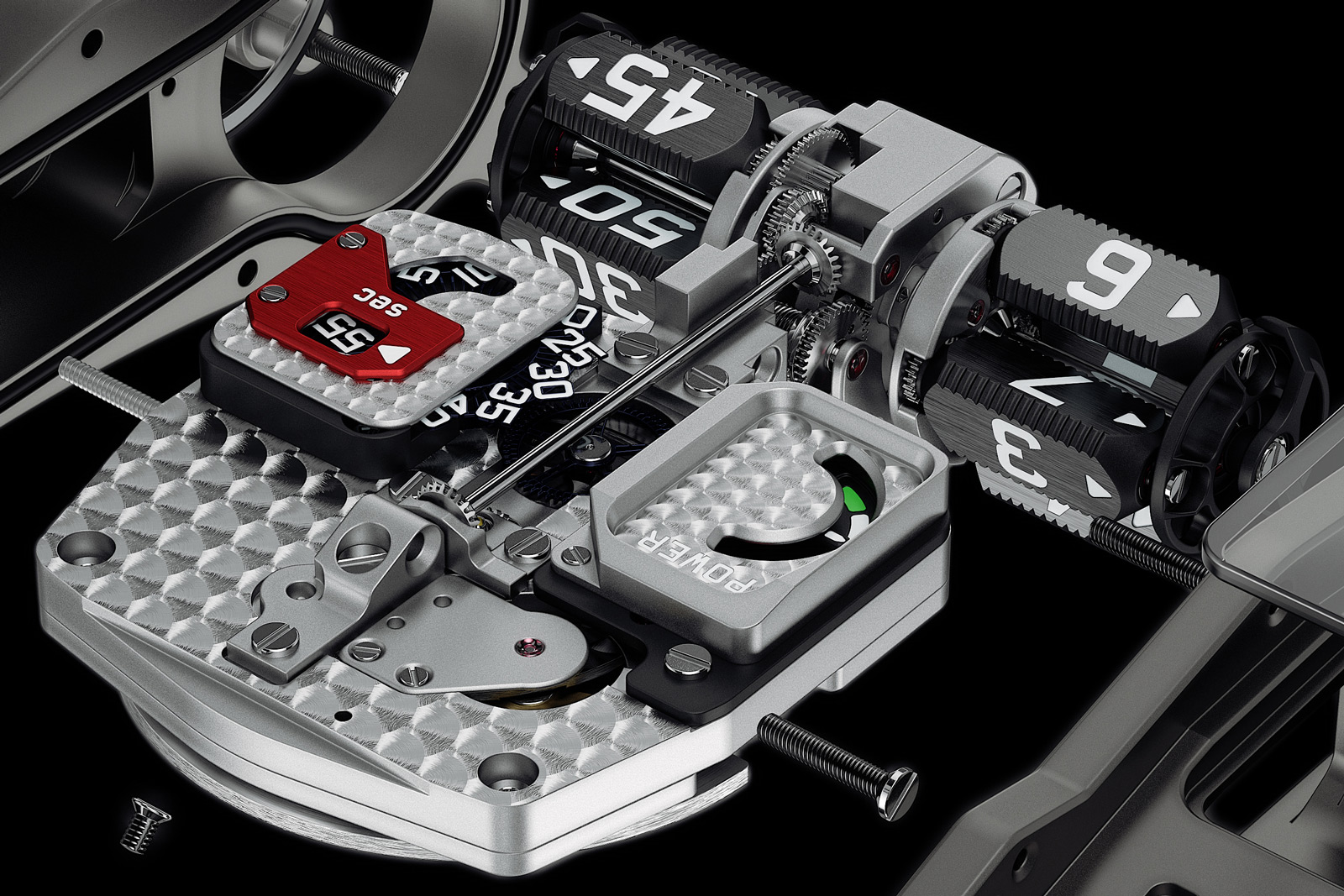 The hours prisms are driven by the minutes, which are similarly indicated by a rack of four prisms. The prisms display the minutes in five-minute increments, with a more precise reading indicated on the scale to the right of the prisms. And unlike the jumping hours, the minute indicator is continuously rolling.

Finally there’s a small seconds display on the right panel of the case, opposite the power reserve indicator. The small seconds is conventional, with a disc of digits scaled in tens replacing a convention seconds hand. 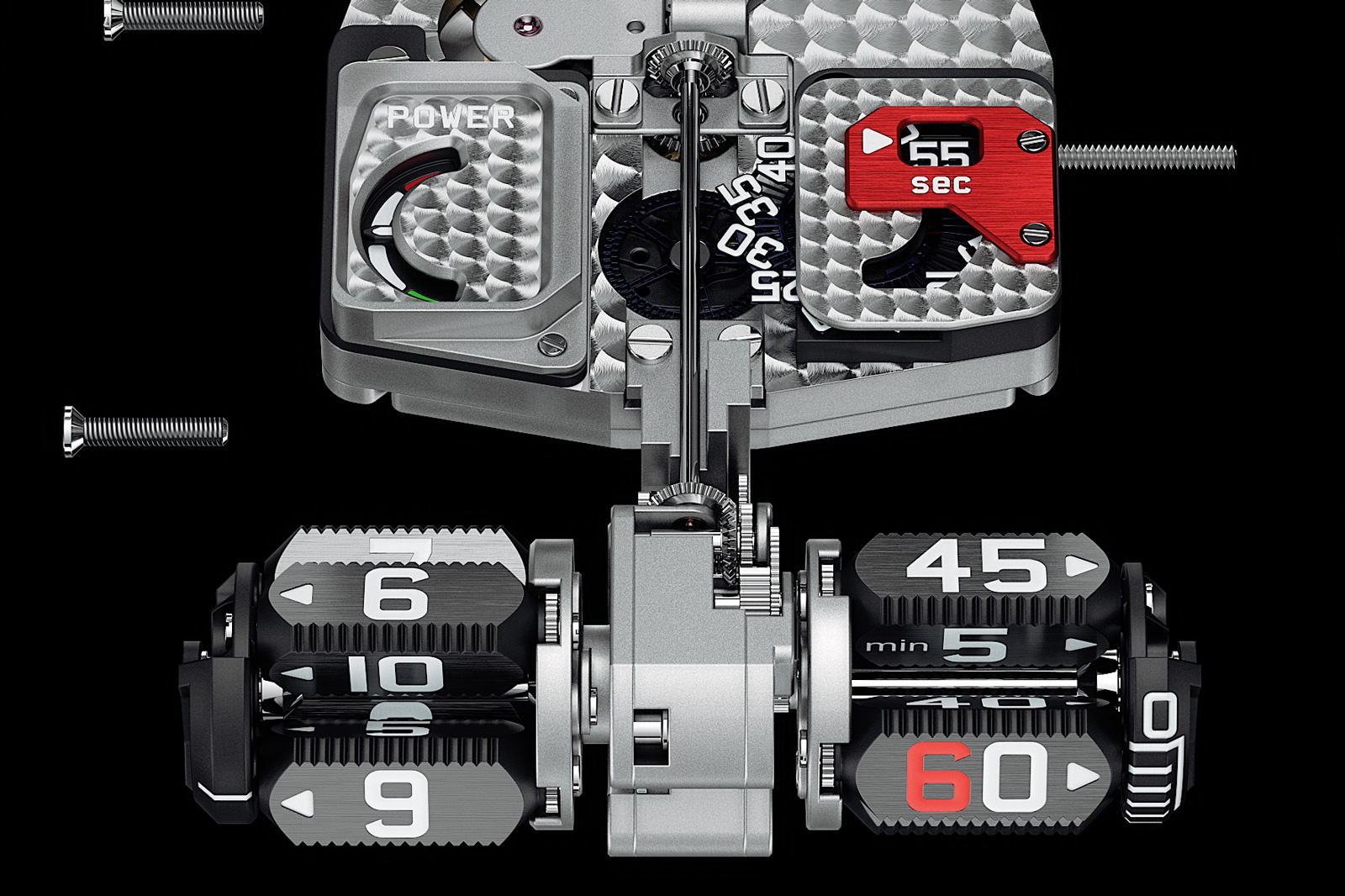 The minutes are driven by the canon pinion of the base movement, connected via a long shaft using bevel gears

And all of that is packed into a symmetrical case with a hinged lid that covers all the displays except for the hours and minutes, hiding less crucial information such as the seconds and power reserve display. 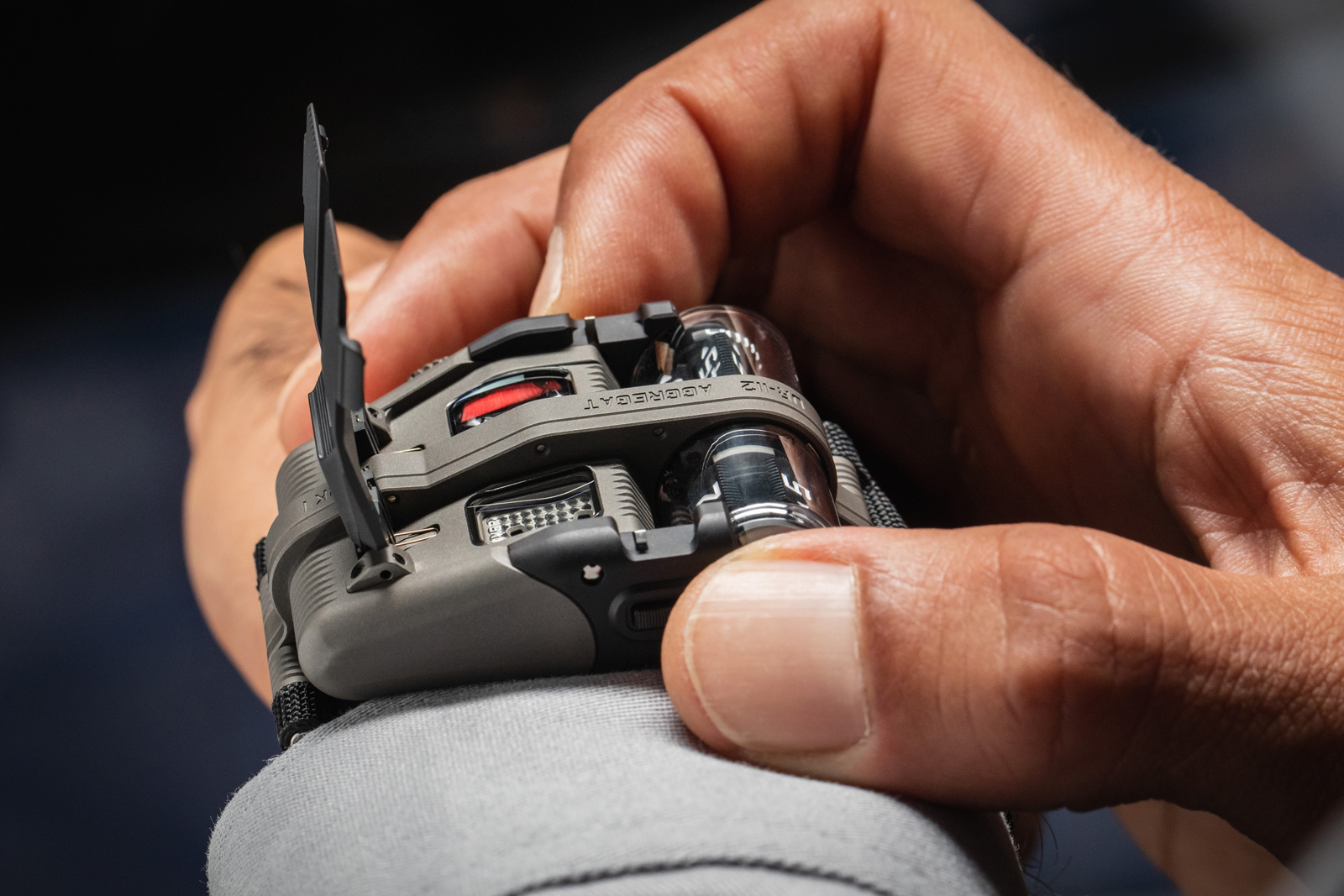