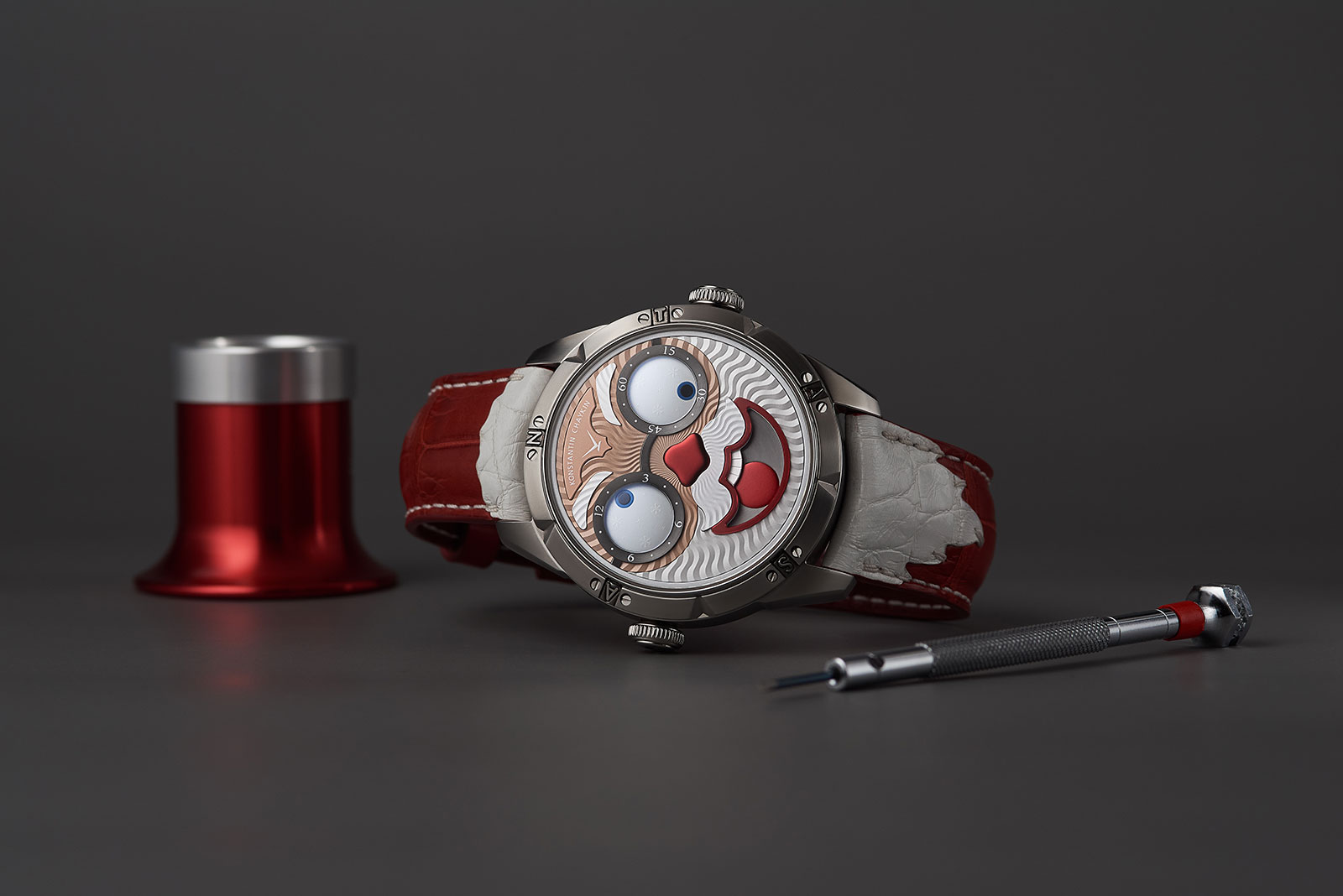 Now an annual tradition for Russian watchmaker Konstantin Chaykin – and also his bestseller by a wide margin – the googly-eyed and whimsical Wristmon watch has been dressed up for this year’s holiday season.

A limited edition of just three watches, the Santa 2021 Special Edition incorporates Yuletide motifs into the design, which retains the signature regulator-style, “moving eye” display, but with a surprisingly complex modification of the construction made necessary by Santa’s spectacles. 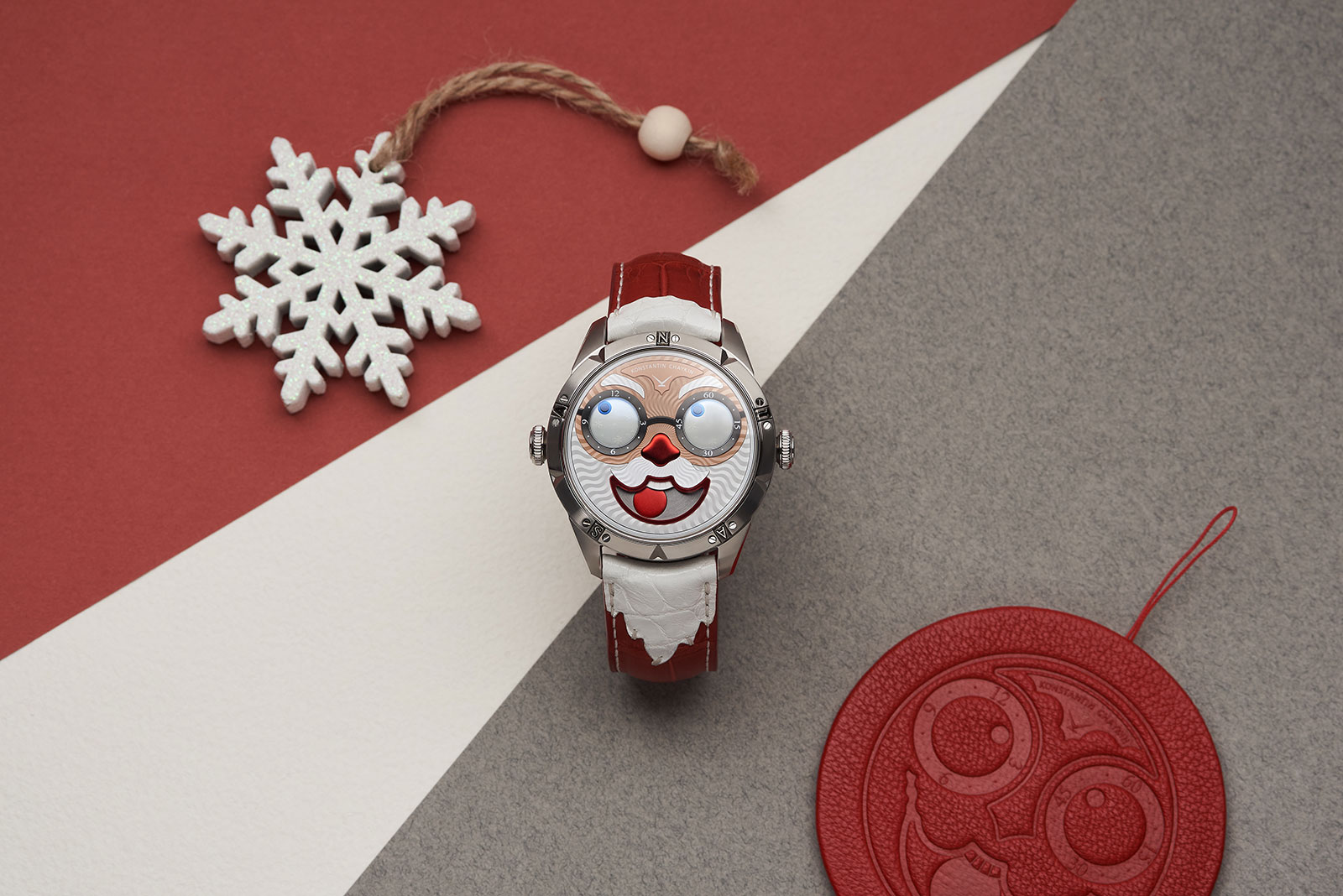 Though Konstantin Chaykin’s technical achievements are many – including a watch that can tell time on Mars – his most famous creation is the Joker of 2017, which spawned the Wristmon collection. Simple but amusing, the Wristmon watches are impossible not to like.

Mr Chaykin has introduced many variants of the Wristmon, but mostly in extremely small runs, allowing them to remain fairly uncommon. The Santa edition, for instance, is a limited edition of just three. 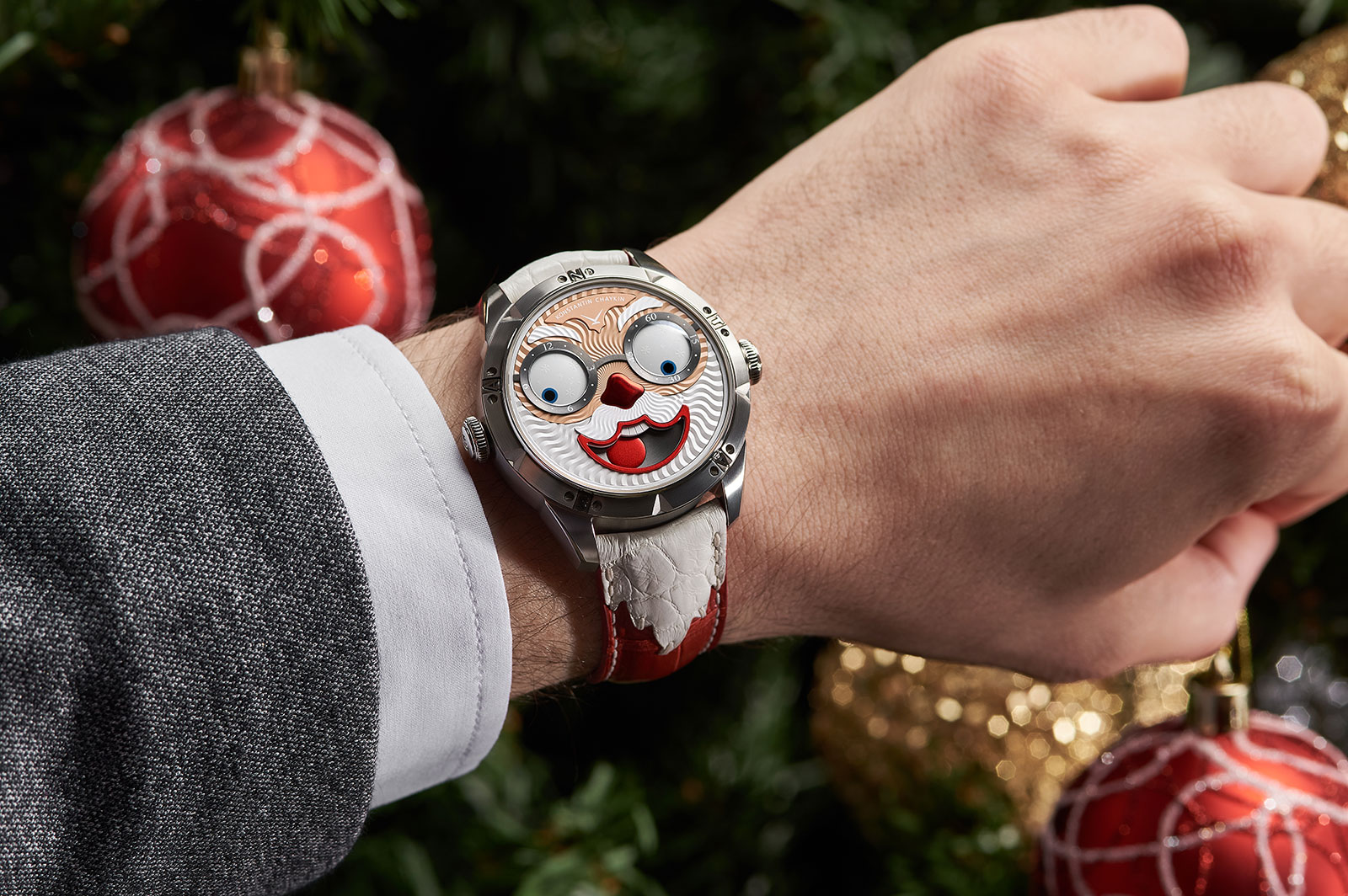 But despite the small run, Mr Chaykin has thoroughly revamped the watch to accommodate the new face, which reflects his attention to even the smallest of details – a quality exemplified by the one-off Joker Selfie. The Santa face on the dial is actually wearing a pair of glasses – made up of a frame with two individual sapphire lenses – which called for modification to both the dial as well as time display module.

Though it’s priced substantially higher than earlier versions of the Wristmon, the Santa edition is a substantially different watch – with just three made – which entirely justifies the price. 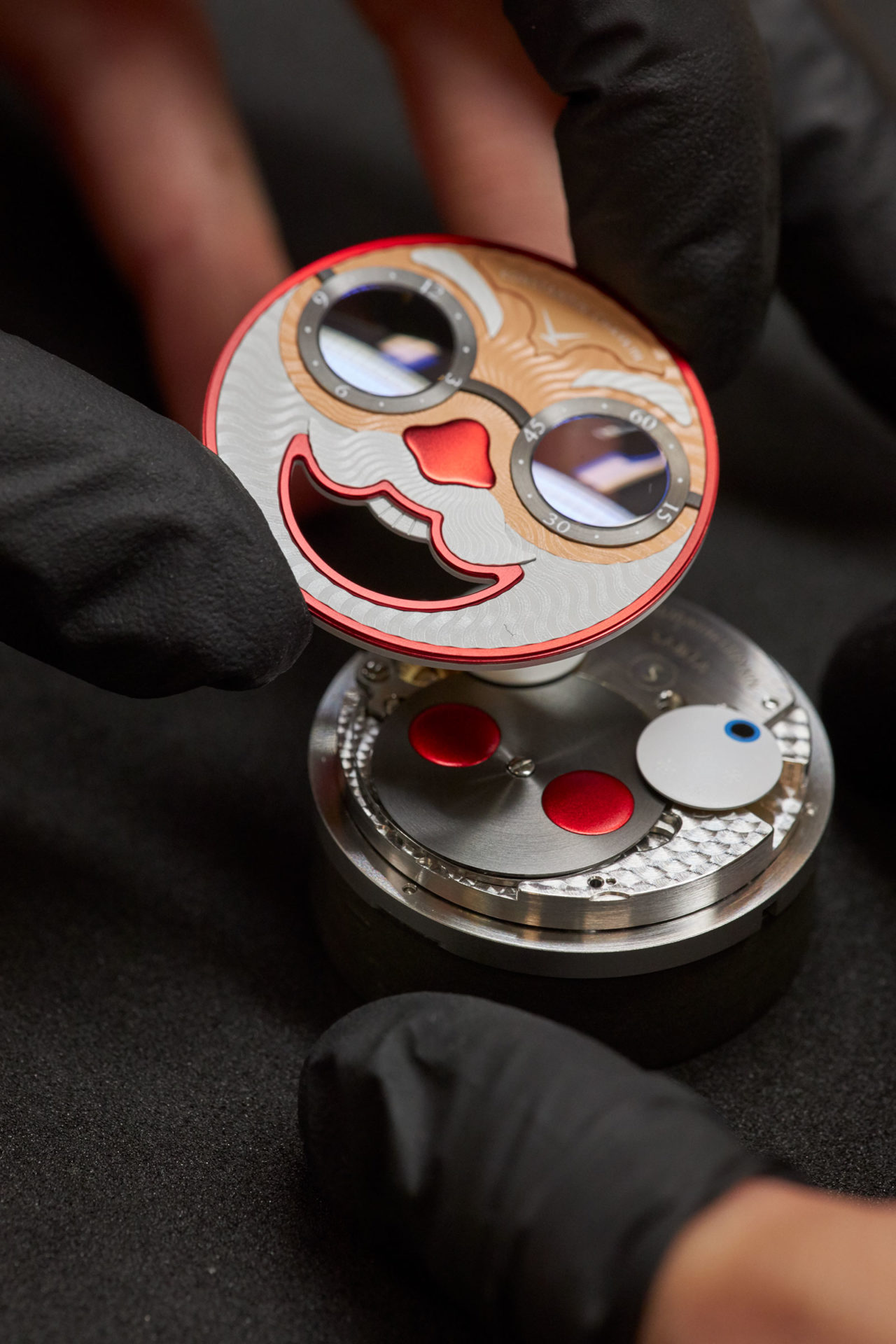 The stereotypical depiction of Santa Claus includes a pair of glasses perched on his nose, but the origins of his optical accessory are a mystery, despite research by Mr Chaykin, who notes that the historical inspiration for Santa Claus, the third-century Saint Nicholas, could not possibly have worn spectacles.

Mr Chaykin was nevertheless determined to ensure his Santa wristwatch had a pair of glasses, which meant a pair of tiny sapphire discs for each lens. The incorporation of the lenses resulted in a thicker dial, which meant having to rethink the rest of the movement in order to retain the same case dimensions. 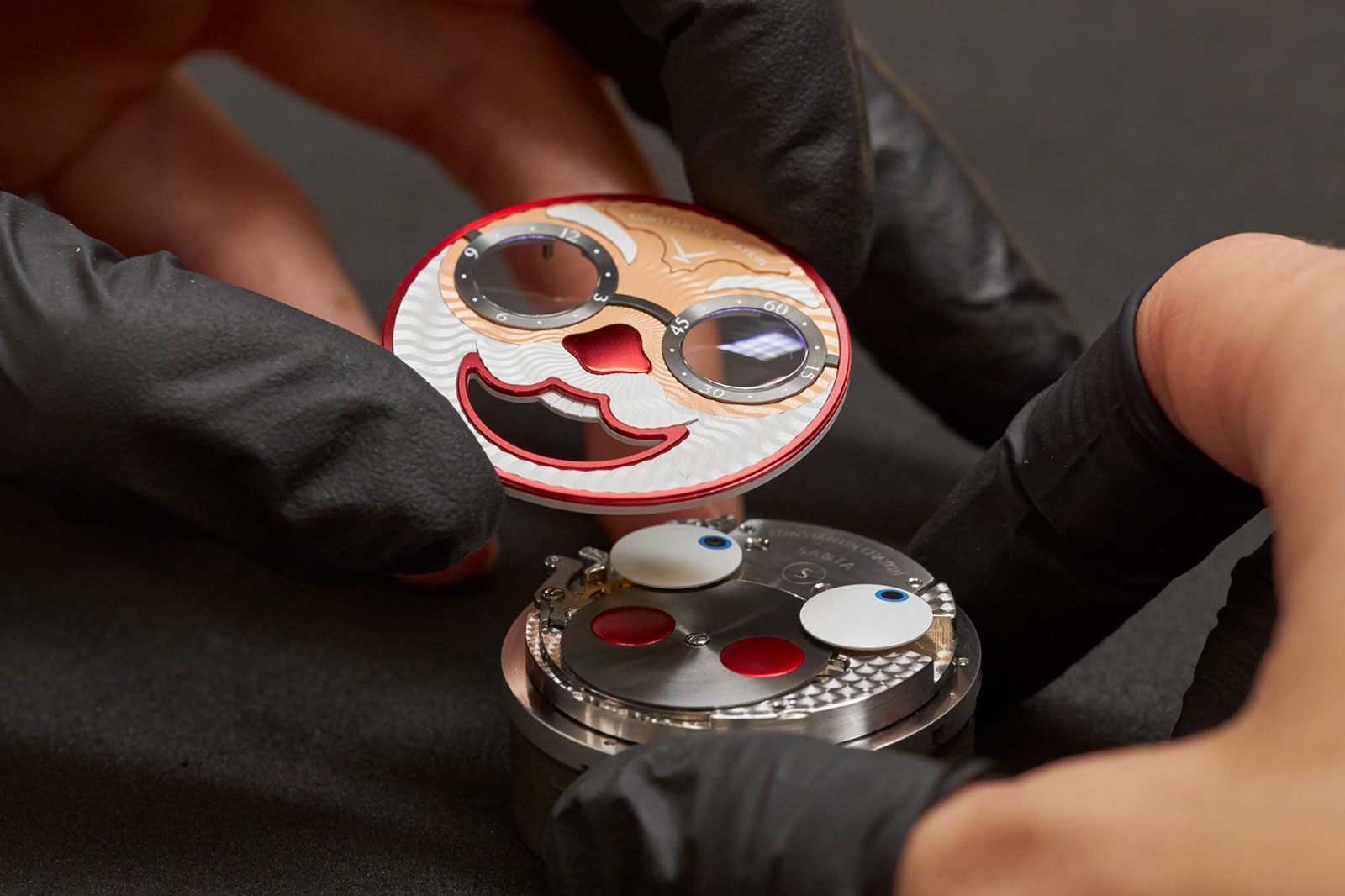 So the display module was modified – creating a new cal. K.07-2 – with the discs for the hours and minutes reduced in size and lowered to sit on the same plane as the moon phase disc. Though the time-display discs are now smaller, the sapphire lenses compensate by magnifying them slightly. 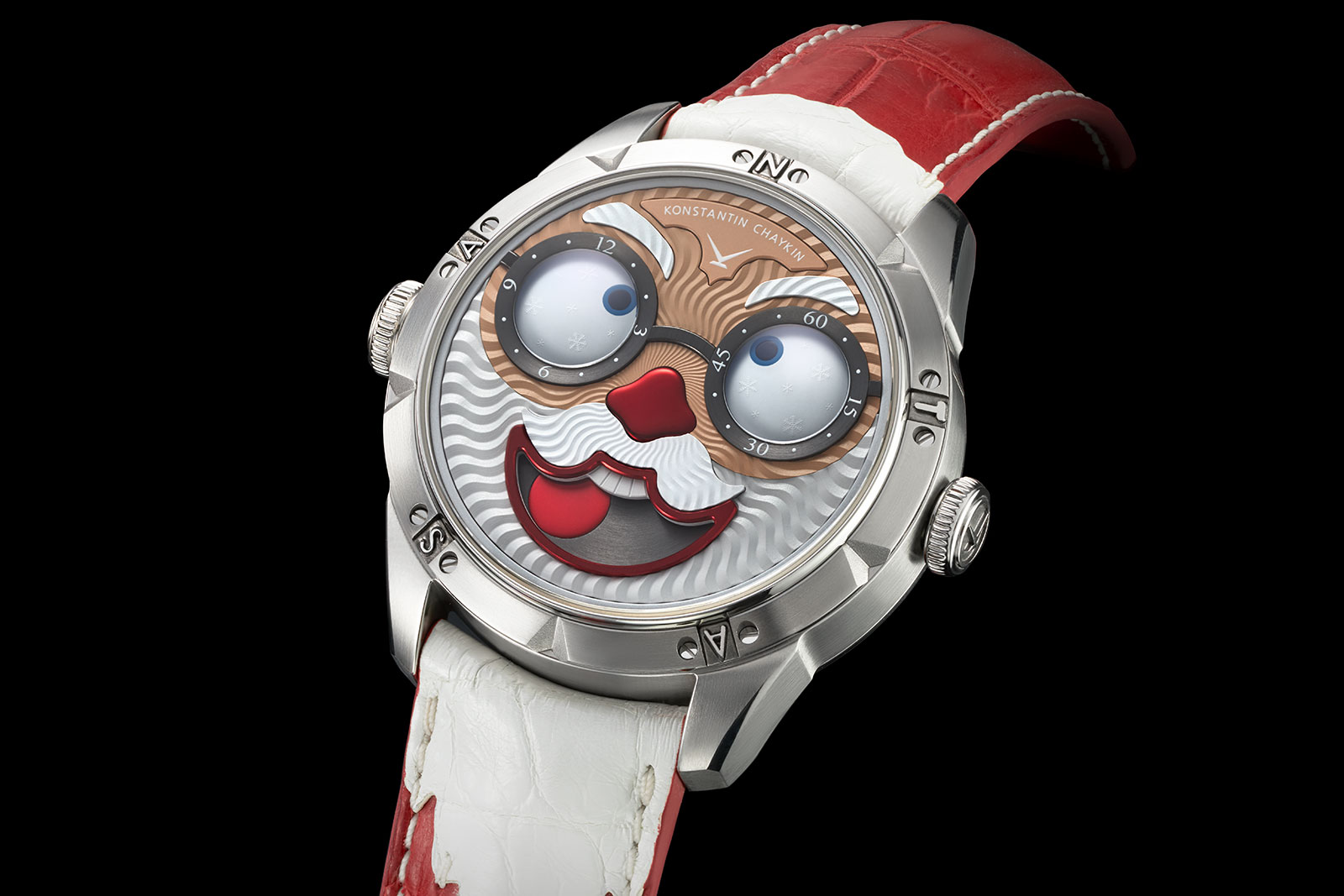 The letters on the bezel spell “SANTA” A more subtle detail: each of the “eyes” are printed with seven snowflakes 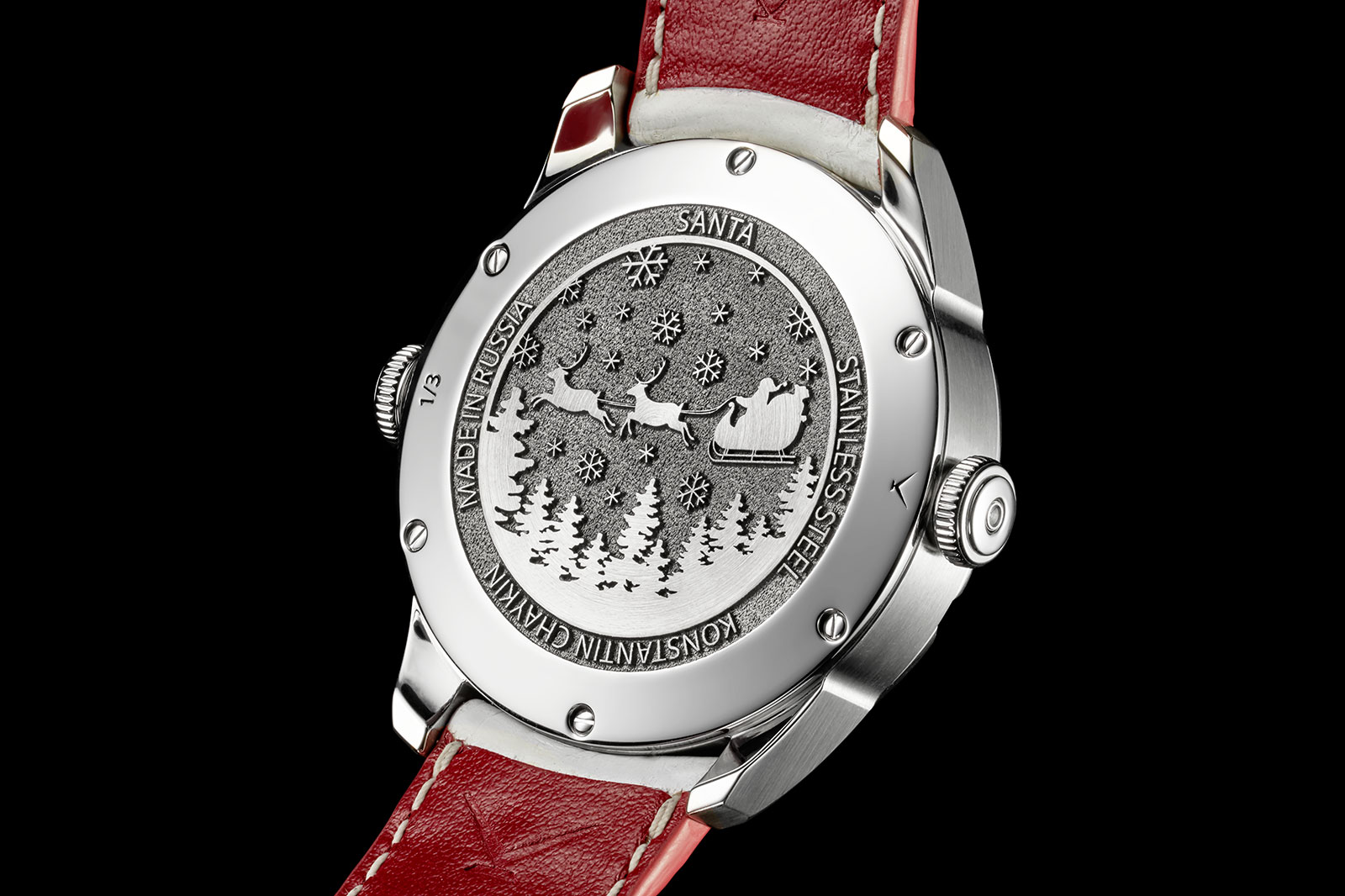 The steel case remains 42 mm, while the base movement is still the robust ETA 2824-2. It’s fitted to a red alligator strap featuring a white alligator inlay meant to resemble Santa’s beard. 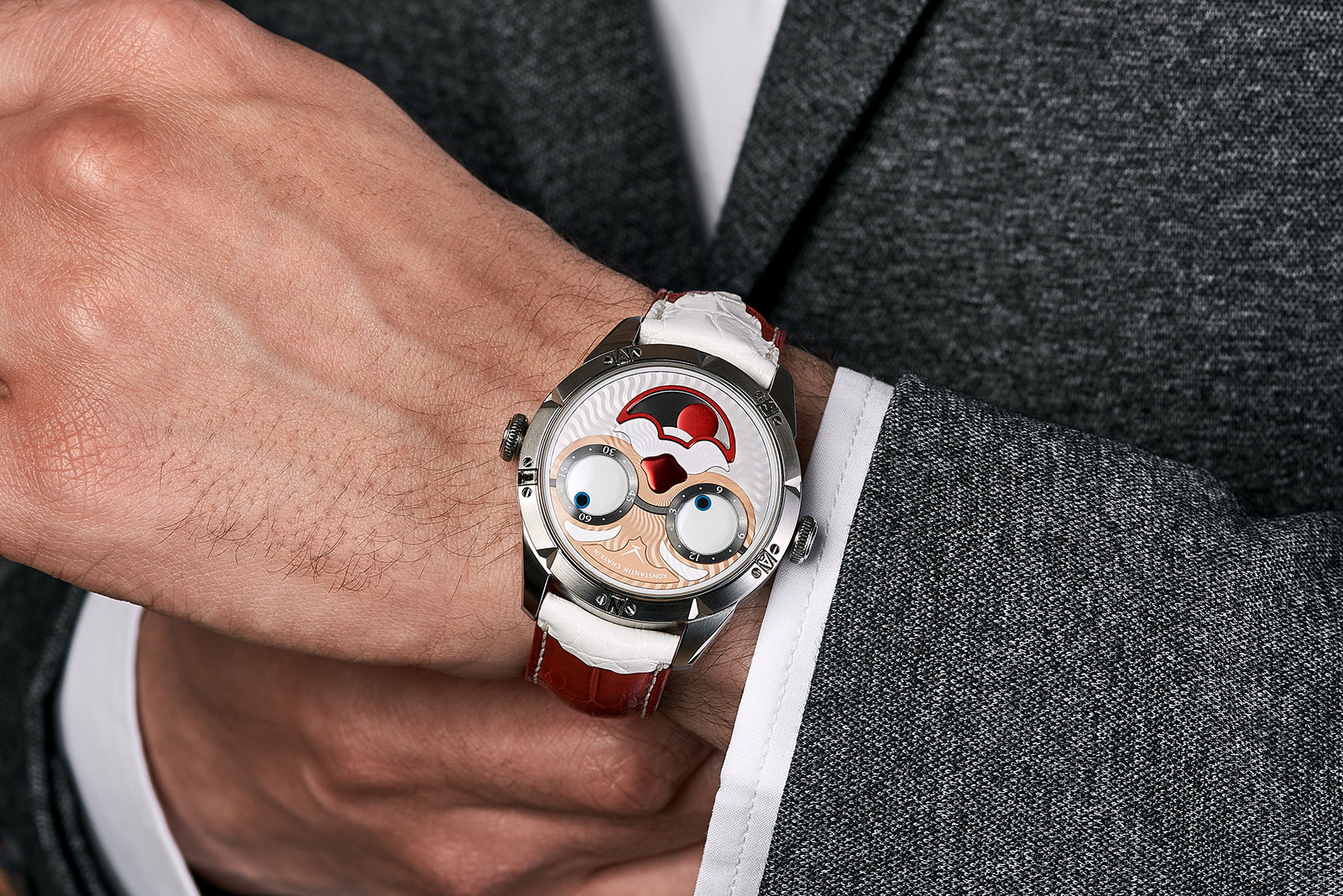