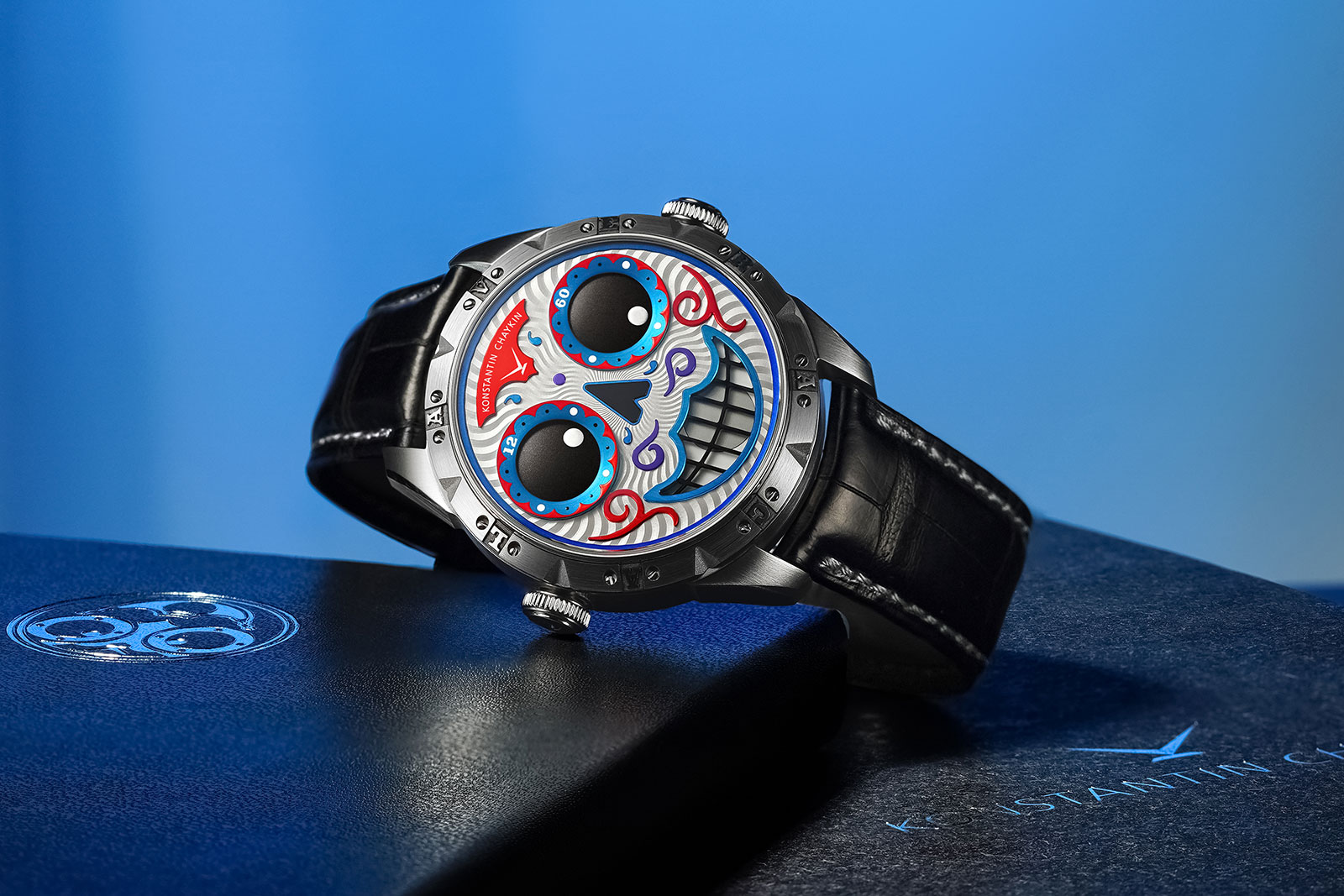 Konstantin Chaykin returns with another variation of his signature Wristmon “rolling eye” wristwatch, this time inspired by El Día de Muertos. Translating as “Day of the Dead”, the Mexican festival celebrates the departed and has served as inspiration for watchmakers as diverse as Chopard and Swatch.

Modelled on the sugar skull candy known as calavera made for the festival, the latest from the Russian watchmaker is the Calavera. Like the other Wristmons, it has an exuberant face with the typical features of a Wristmon – time is indicated by the eyes while the mouth is a moon phase display. 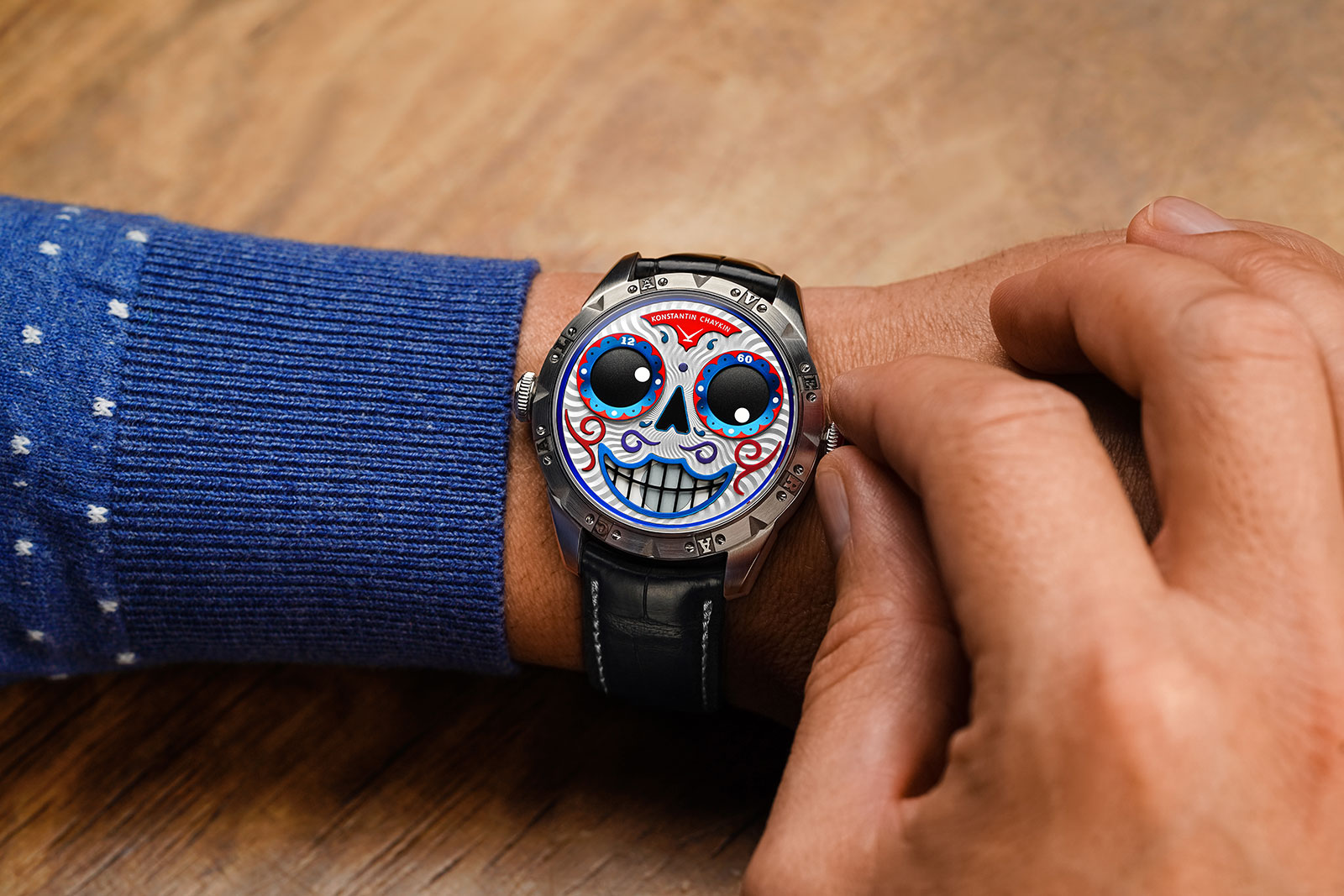 Konstantin Chaykin has created many Wristmon variants – the most recent was inspired by the titular yellow characters of Minions – which makes it seem like a great many have been produced. But in reality each edition is a small run of 20 or less watches, which means the aggregate number of watches is modest.

Still, the appeal of the various Wristmon editions vary; because of their similar complications, the models tend to converge on each other. The Calavera, however, stands out. With its bright colours and curlicues, the striking face easily evokes the Mexican festival, while being distinct from other Wristmons. 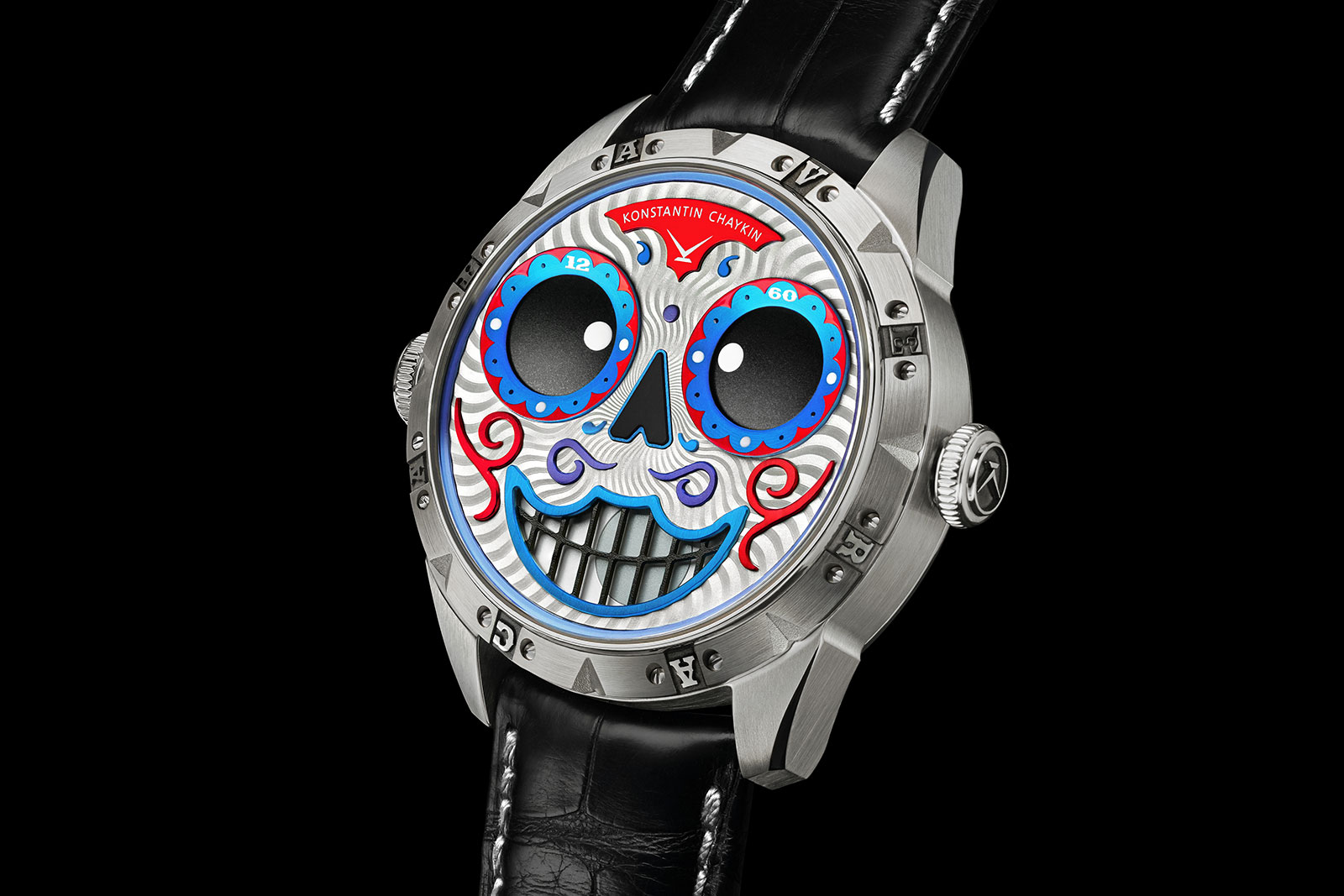 As is typical for a Wristmon, the dial is fairly complex. Here it’s comprised of 12 components, with the base featuring a stamped radial-wave guilloche and finished in a bright silver meant to resemble powdered sugar of the calavera.

While the dial is unique to the Calavera, the rest of the watch is larger identical to the Joker. It has a 42 mm case that’s 13.7 mm high, thicker than recent variants of the Wristmon as a result of the ETA 2824 base movement.

On top of the ETA base sits Konstantin Chaykin’s in-house display module that indicates the hours and minutes with discs within each of the eyes, while the aperture for the mouth is a moon phase display. 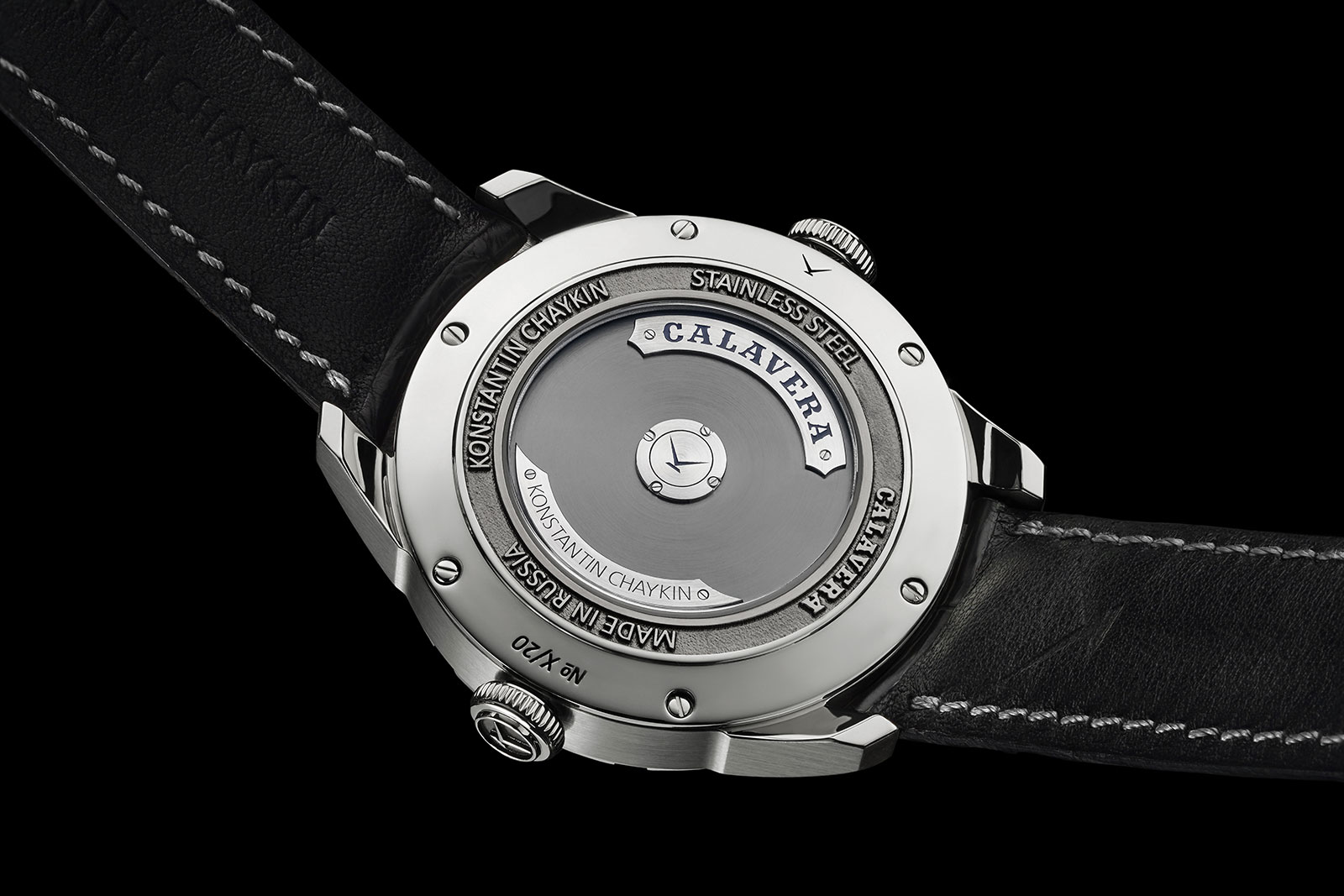 The Calavera is equipped with a “mystery” rotor, a disc weight on the underside of one half. As a result, the view through the open back reveals only the black-coated disc with two plates bearing the model and brand names. 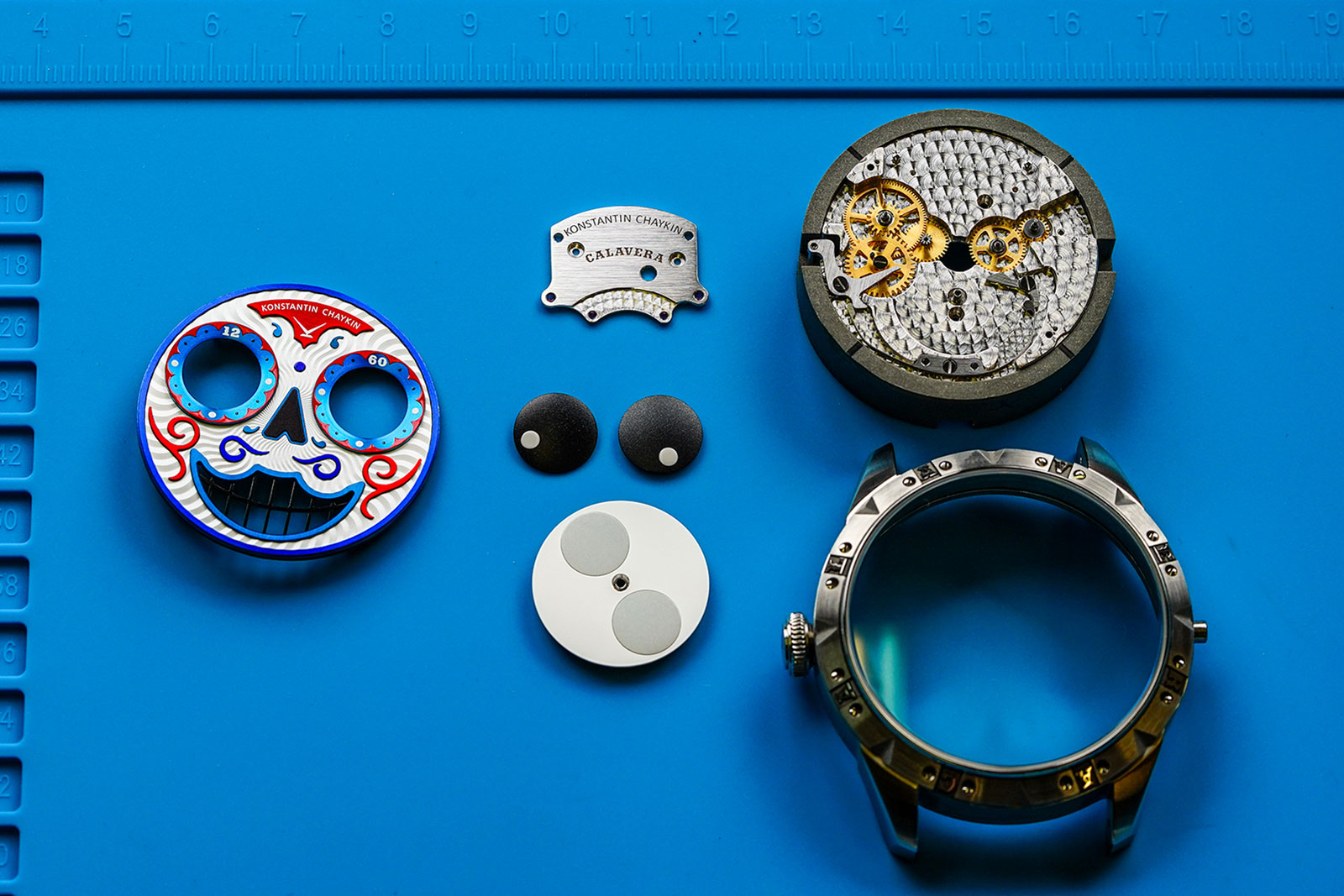 Under the rotor is a familiar calibre. Several base movements have been used for the Wristmon watches, but the Calavera returns to cal. K07-0 found in the very first watch in the line, the Joker.

The cal. K07-0 is built on the ETA 2824 base, a robust movement with impeccable reliability, although with the downsides of short, 38-hour power reserve as well as thickness. 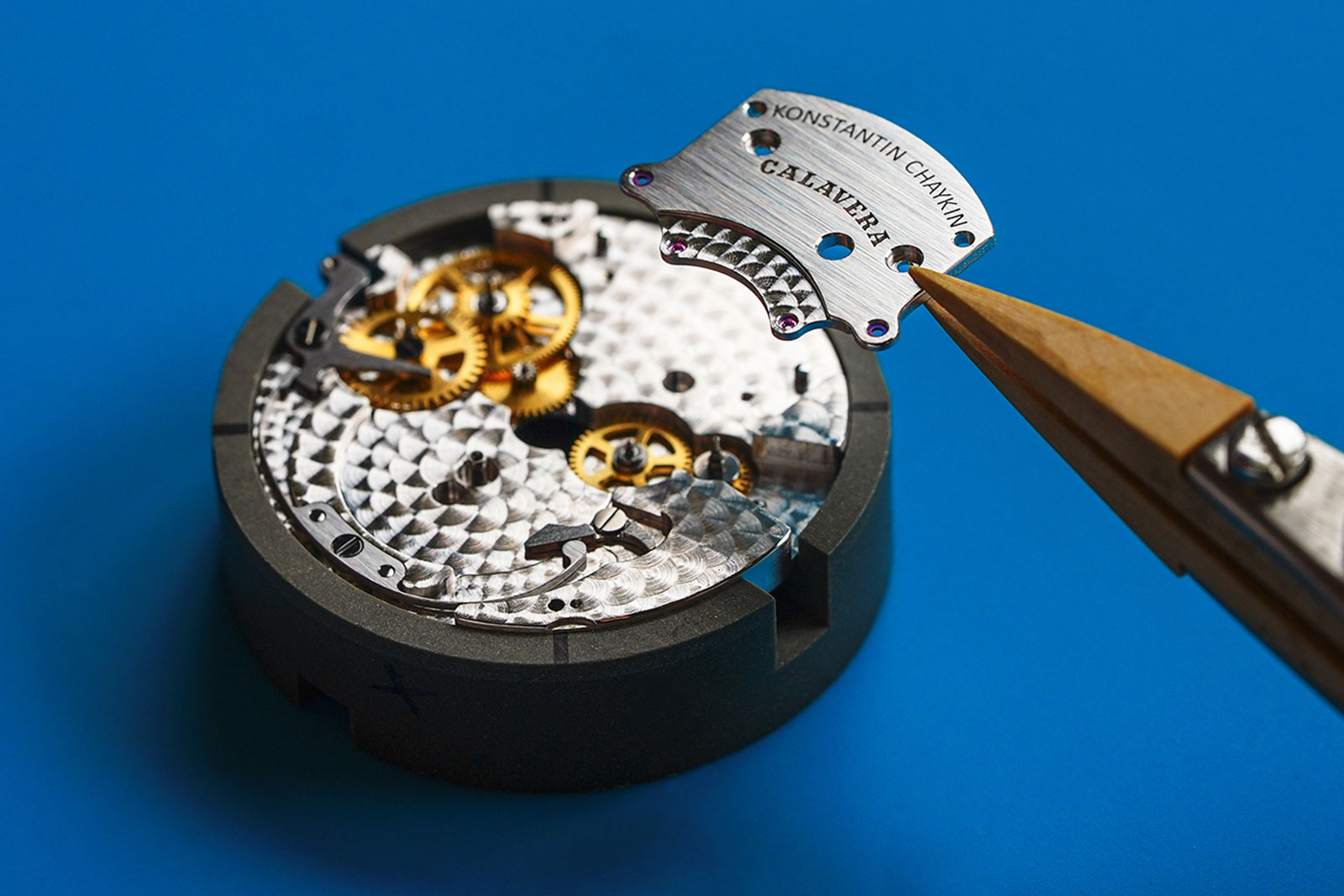 For the Chinese Year of the Ox.