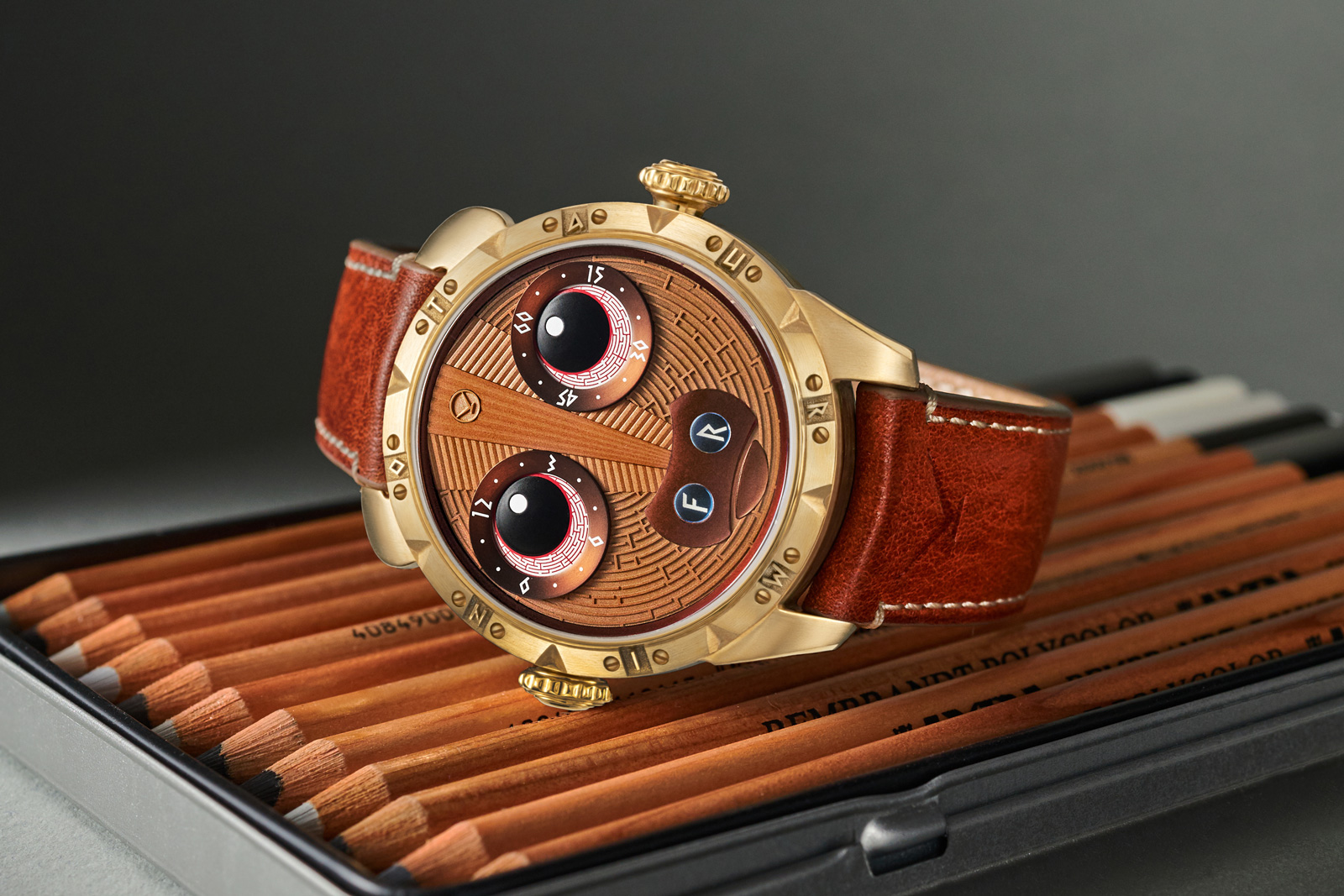 Four years after the debut of the Joker – and its myriad subsequent iterations – Russian independent watchmaker Konstantin Chaykin still manages to surprise and impress. The latest version of Chaykin’s googly-eyed wristwatch is the Wristmon Minotaur.

The third instalment in the watchmaker’s annual Chinese zodiac edition, the Minotaur has a case and dial that mimics the head of a bull, since 2021 is the Year of the Ox. Although its hour and minute display are identical to the early versions of the Joker, the Minotaur has been upgraded in several ways, including with a dual-letter day display and a Vaucher base movement. 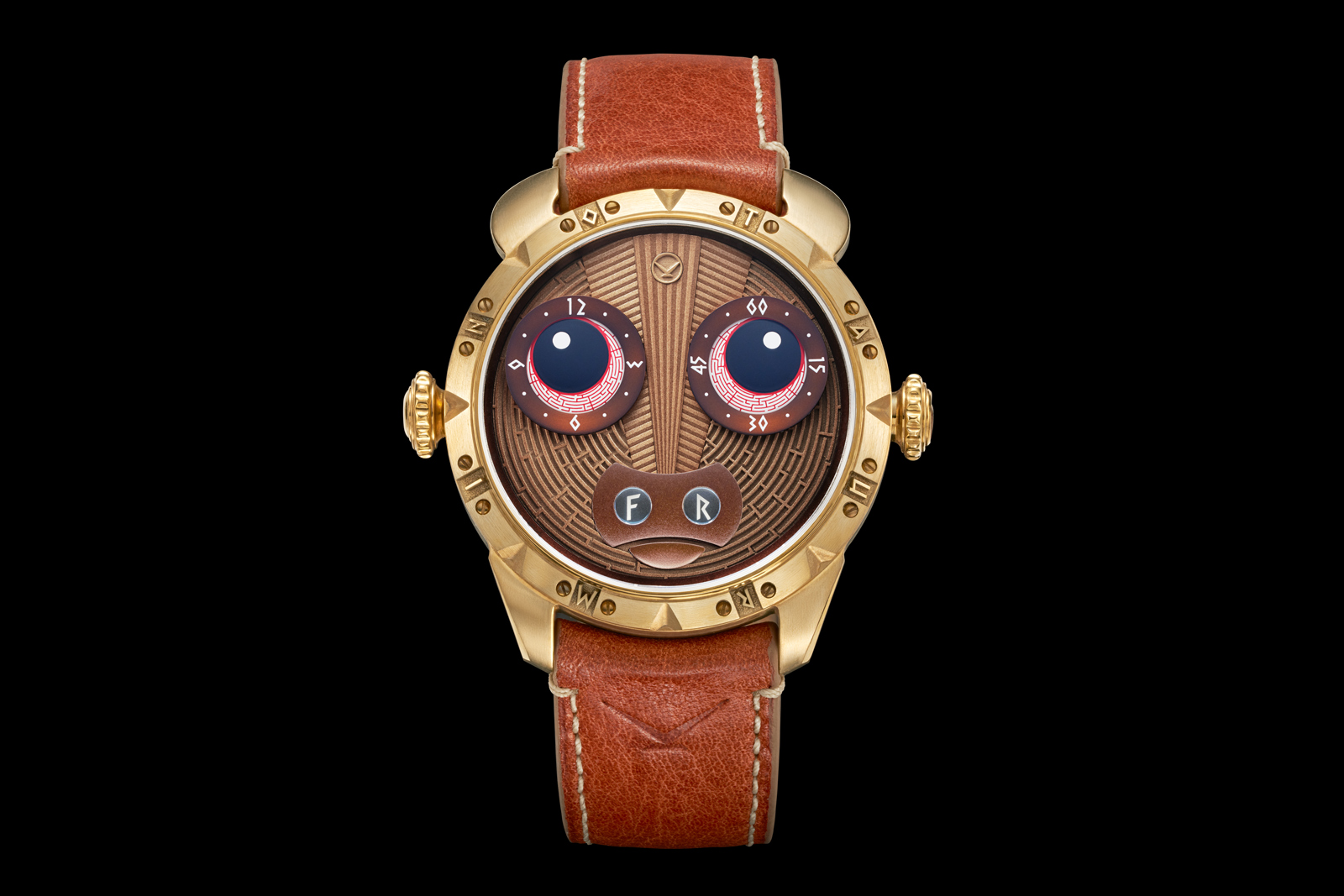 The Minotaur is another excellent design by Mr Chaykin, and one of his more amusing creations since the original Joker. Not only does the dial form a face, but the case has been reworked to resemble a bull’s head with asymmetric lugs where the upper pair resemble a pair of horns.

More importantly, the Minotaur is not merely a tweak of colour or design. Its functionality has been revamped, namely with the nostril display that shows the first two letters of the day. In fact, the novel day display is another example of Mr Chaykin’s ingenious realisation of function following form, but done well enough that it feels just right. 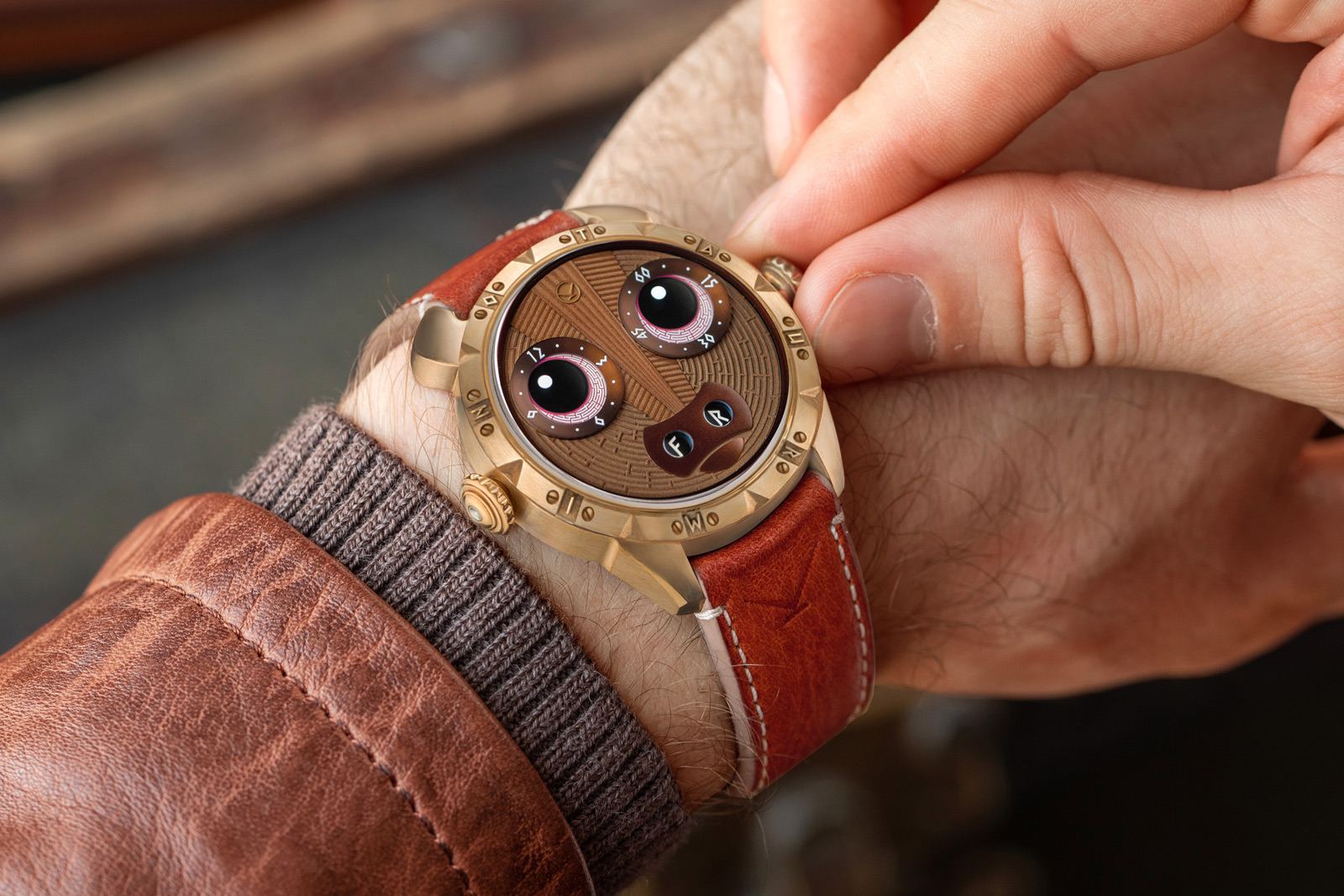 And the price of the Minotaur is in line with recent watches in the Wristmon collection, which is around US$22,000. While significantly pricier than the original Joker that cost around about US$7,500, the new Wristmons are produced in far smaller numbers, helping justify the price.

At the same time, the Minotaur boasts an extra function as well as a finer base movement, which make it slightly better than its immediate predecessors.

But more crucially, the price reflects the “bullish” sentiment in today’s watch market (and the broader market for any asset), where even independent watchmaking has become a fad. Proof is the fact that all eight examples of the Minotaur are already sold out according to Mr Chaykin.

Though the watch commemorates the Chinese zodiac, the design instead takes inspiration from Greek mythology – the Minotaur was a mythical beast half bull and half human. The Grecian theme explains the relief engraving on the dial that’s inspired by the mythical Labyrinth at Knossos in Crete, the maze built to contain the Minotaur. 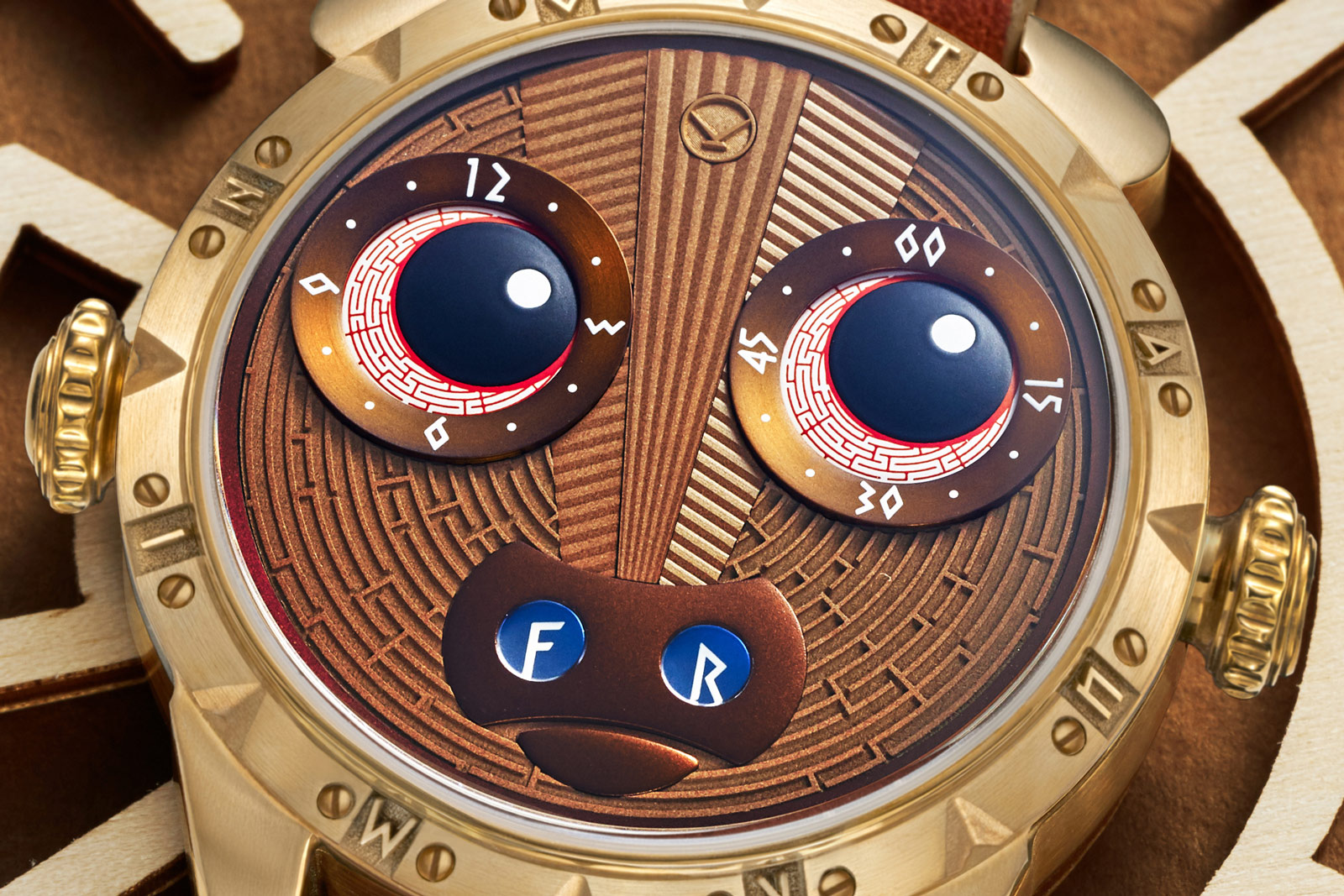 While the relief engraving is appealing, the most attractive feature of the watch from a technical standpoint is the day of the week display, which replaces the moon phase found on most Wristmon models.

It relies on two discs, like a big date, to show the first two letters of a day within the nostrils of the bull, giving the bull a quirky, sightly furious look. 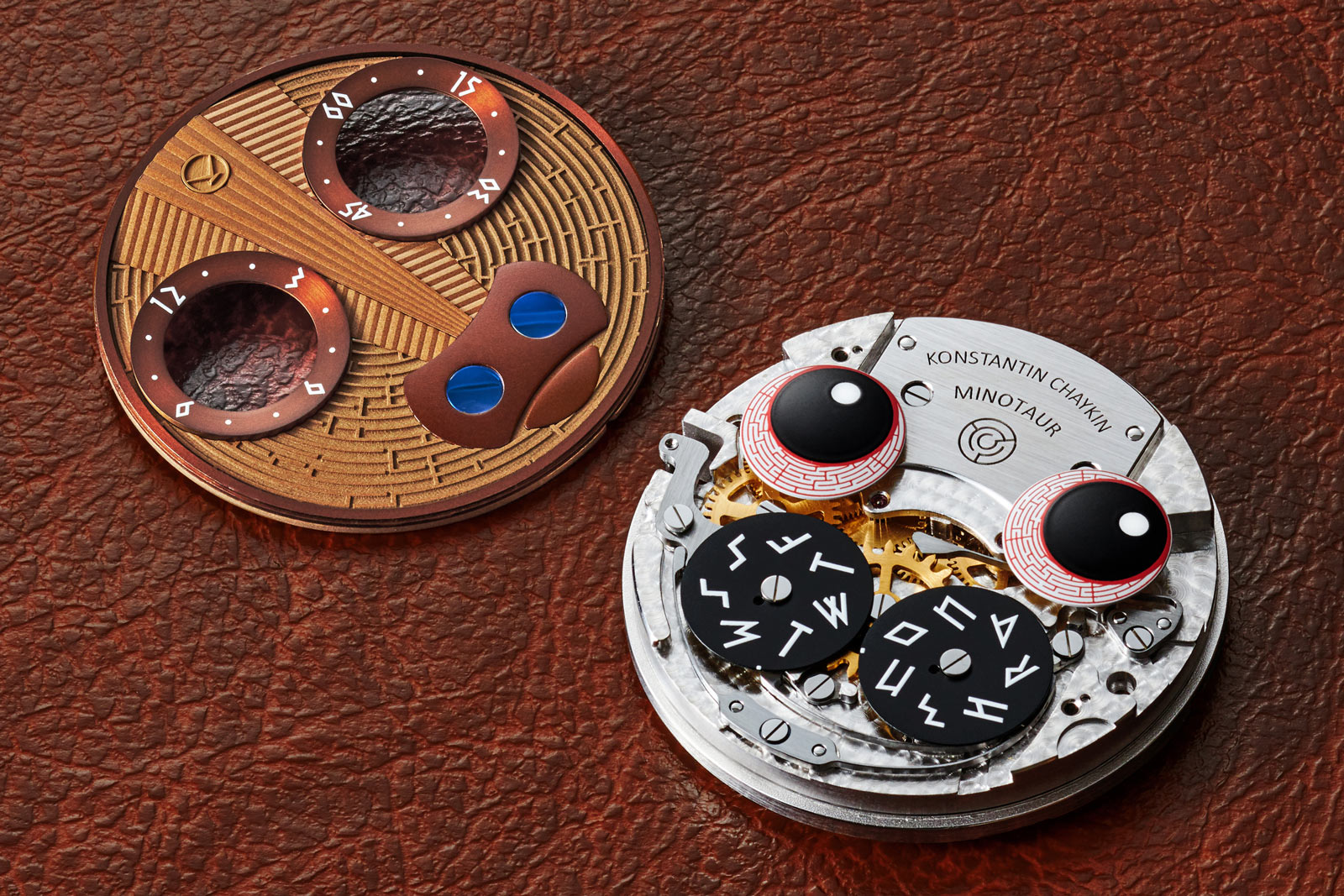 Notably, the Minotaur’s upgrades continue on the back – the base movement is a Vaucher VMF 3002, a decidedly more upscale calibre compared to the ETA 2824 found in earlier generations of the Wristmon Joker.

The VMF 3002 is thinner and all around more sophisticated than the ETA 2824. Amongst other things, the VMF 3002 has a free-sprung balance wheel, along with a longer power reserve. 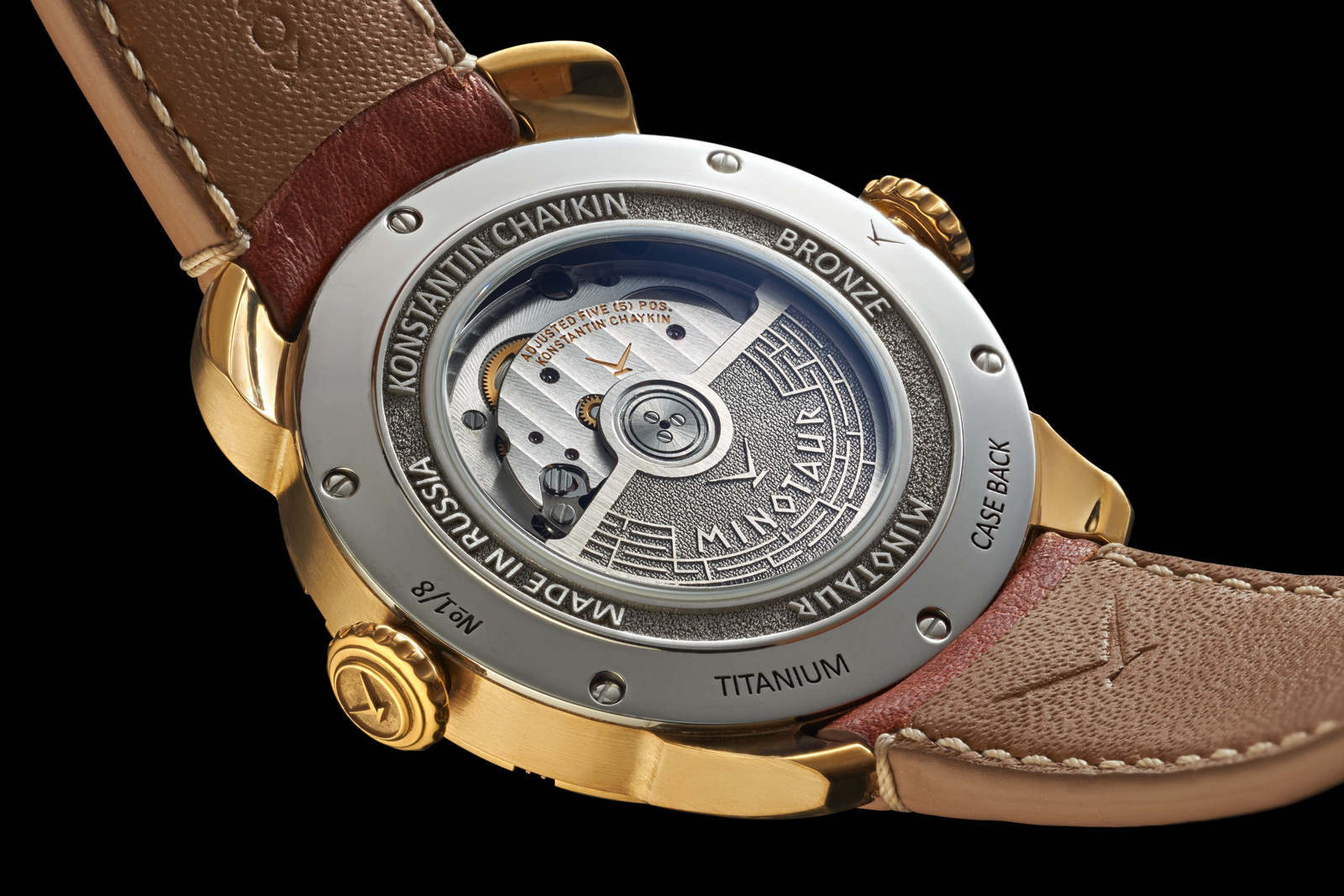