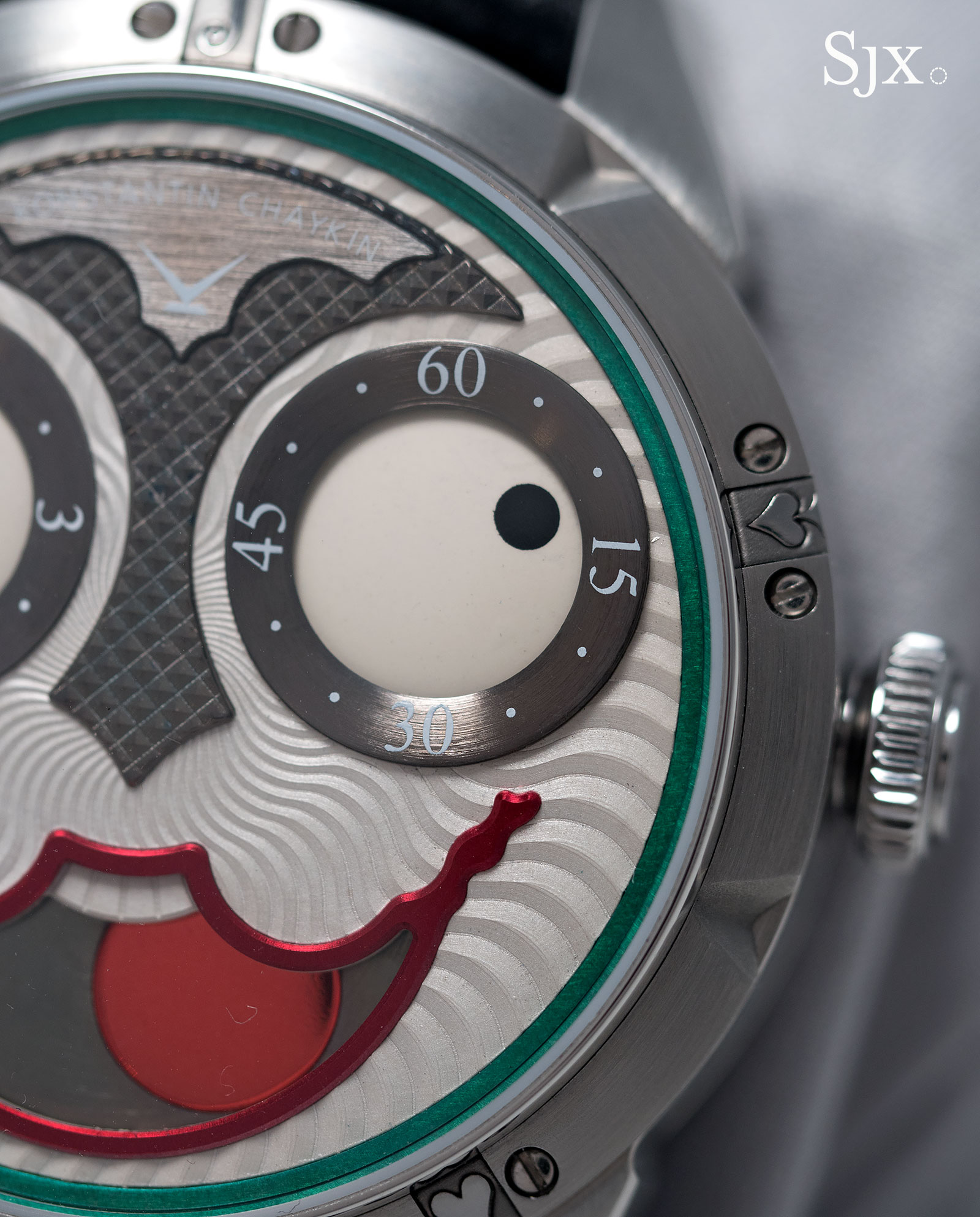 Unveiled just before Baselworld 2017 with some hilarity, the Konstantin Chaykin Joker is one of the highlights of the event.

Chaykin is a member of the AHCI, so while the Joker is delightfully silly, it is a proper mechanical watch. A simple but ingenious rejigging of the time display creates the face, which shows time and the age of the moon. The Joker tells the time regulator-style, with the hours and minutes indicated on separate dials that form the eyes of the face. Hours are on the left and minutes on the right, with the pupils of each eye indicating the time. Because the pupils travel at varying speeds, they often end up in opposite directions. Consequently the expression on the face varies throughout the day, but is continuously amusing. Telling the time has never been so mirthful. A moon phase display compounds the humour of the dial, taking the form of an open, smiling mouth. While the time is set conventionally via the crown at three, the moon phase can be advanced with a recessed pusher set into the fixed crown at nine o’clock. The dial is decorated in a fairly traditional manner, with a wavy, radial guilloche on the silver-plated surface. The nose of the face, on the other hand, has a hobnail guilloche and ruthenium plating, giving it a dark grey finish. Despite the lighthearted nature of the Joker, its origins lie with a more serious timepiece. The Joker evolved out of Chaykin’s Decalogue, the only wristwatch that shows Jewish time, which also has a moon phase at six o’clock. Chaykin realised that the time display on the Decalogue could be tweaked into a face, resulting in the Joker.

The movement inside the Joker is built on the ETA 2824, making this the first watch in Chaykin’s line-up that uses a Swiss movement. While the ETA 2824 is impossibly robust, it does have a short 38-hour power reserve.

On top of the ETA sits a 61-part module that shows the time regulator-style as well as the moon phase – this module is produced in-house by Chaykin.

All of that, however, is hidden behind the solid back, which has been cast with a “J” in the centre. The letter’s curly tail is reminiscent of the script found in several Time Burton movies, including The Nightmare Before Christmas and Alice in Wonderland – a visual style that’s a thorough match for the watch. Chaykin makes his own watch cases, including the steel case of the Joker. It measures 42mm in diameter and 13.7mm high, giving the watch good proportions. The wide, sloping bezel makes the Joker seem smaller than it is. The case is steel, well detailed, and neatly finished. Up close the edge finishing of the case is slightly uneven, but that suits the look of the watch just fine. The irregularity in some of the finer details of finishing is a consequence of the watch is manufactured mostly in-house. It’s worth noting that practically all of Chaykin’s watches and clocks are all powered by movements that are in-house and 100% Russian. The bits he cannot produce, like jewels and springs, are purchased from Russian suppliers.

The Joker is a limited edition of 99 pieces in steel, priced at €6990 before taxes. That’s equivalent to US$7550. For the money the Joker is a compelling buy. It’s available from Konstantin Chaykin.