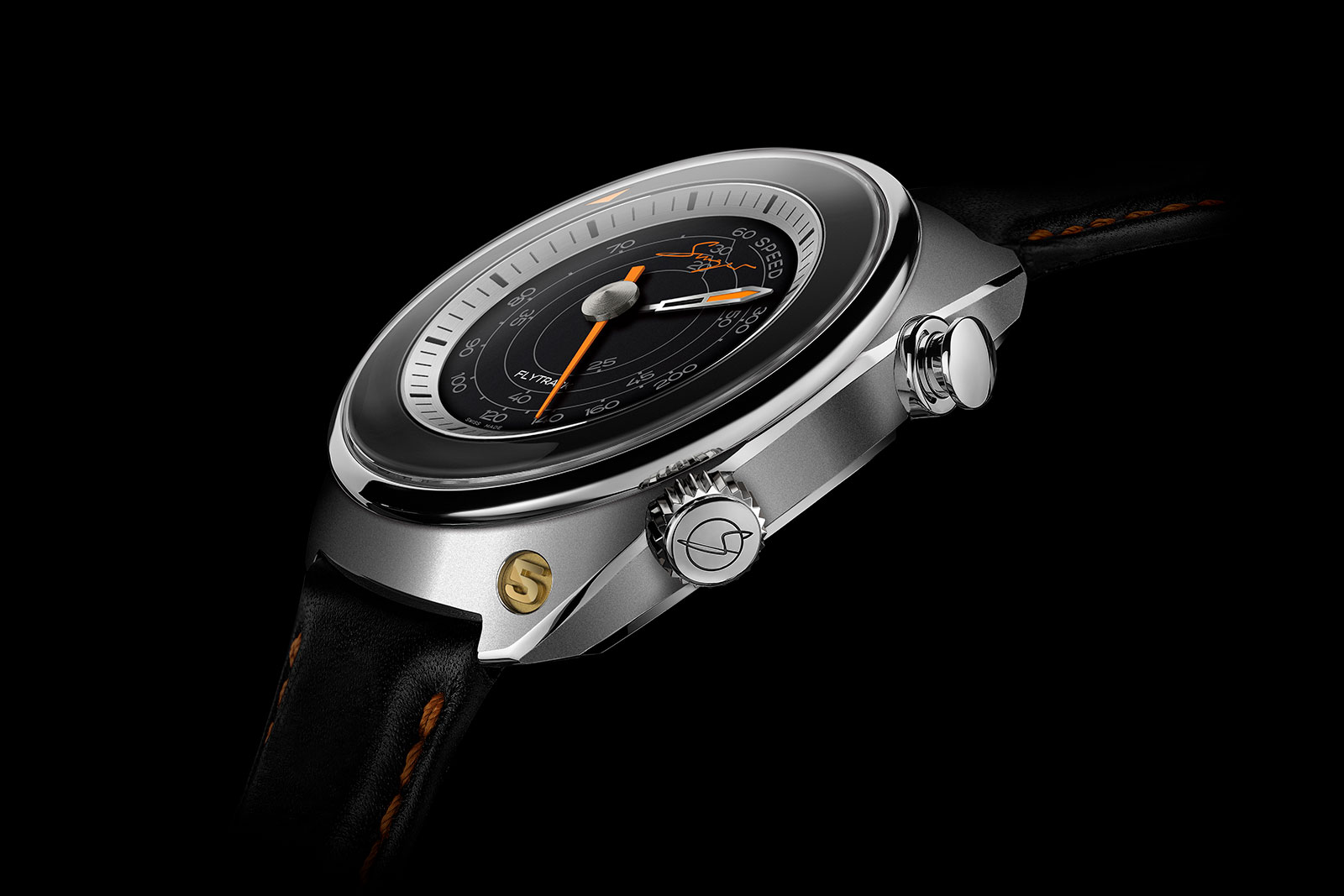 A watchmaker established by Porsche 911 “restomod” specialist Singer Vehicle Design, Singer Reimagined got off the ground with the Track 1, a chronograph with 1970s vibes that’s powered by one of the most ingenious 21st century chronograph movements.

Now Singer has just taken the covers off its second model, the Flytrack Prime Edition. Essentially a condensed version of the Track 1 chronograph, the Flytrack is equipped with a constantly-running central seconds hand that can be instantaneously reset and restarted – a flyback in other words – allowing it to measure short elapsed times.

Making its debut as a 30-piece “Prime Edition” in titanium, the Flytrack is powered by the AGH 9634 AgenGraphe movement, a simplified version of the full-fledged chronograph movement in the Track 1. The Flytrack’s style and feel is very similar to the Track 1 – the case is identical in size – which means 1970s and speedometer-inspired. It’s an appealing retro look that’s executed well on the Track 1, and nearly as well on the Flytrack, save for one caveat: the combination of a minute hand and hour ring to tell the time is peculiar and probably affects legibility. 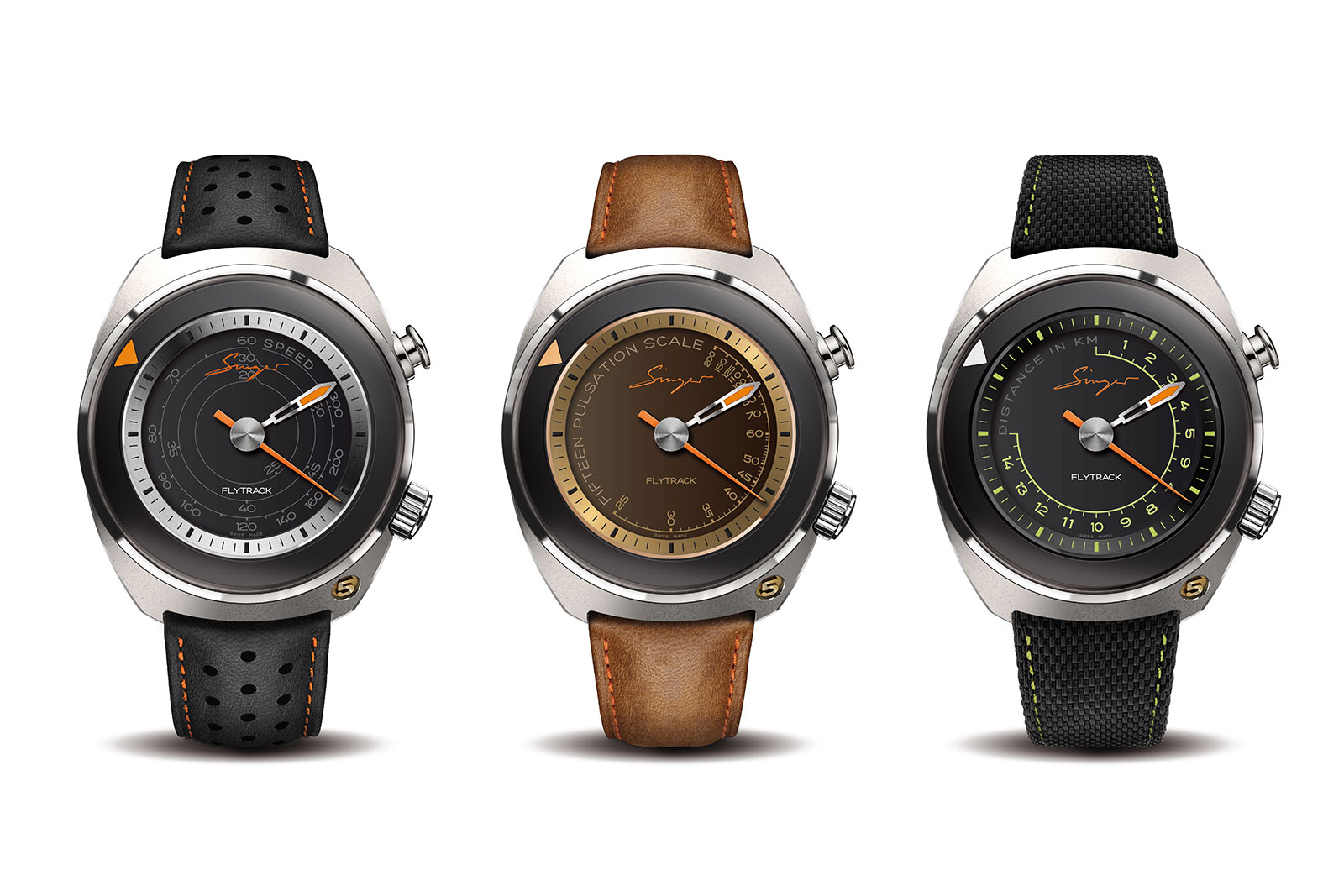 From left: tachymeter, pulsometer, and telemeter

Of the three versions, my pick is the one with a tachymeter dial. The dial has both the largest scale and the least text, which paradoxically makes it the most balanced and cleanest.

Because the scales for pulsometer and telemeter versions are only semi-circular, the dials look a bit sparse. At the same time, the resulting space is filled up with a description – “FIFTEEN PULSATION SCALE” – that’s large and throws off the balance. 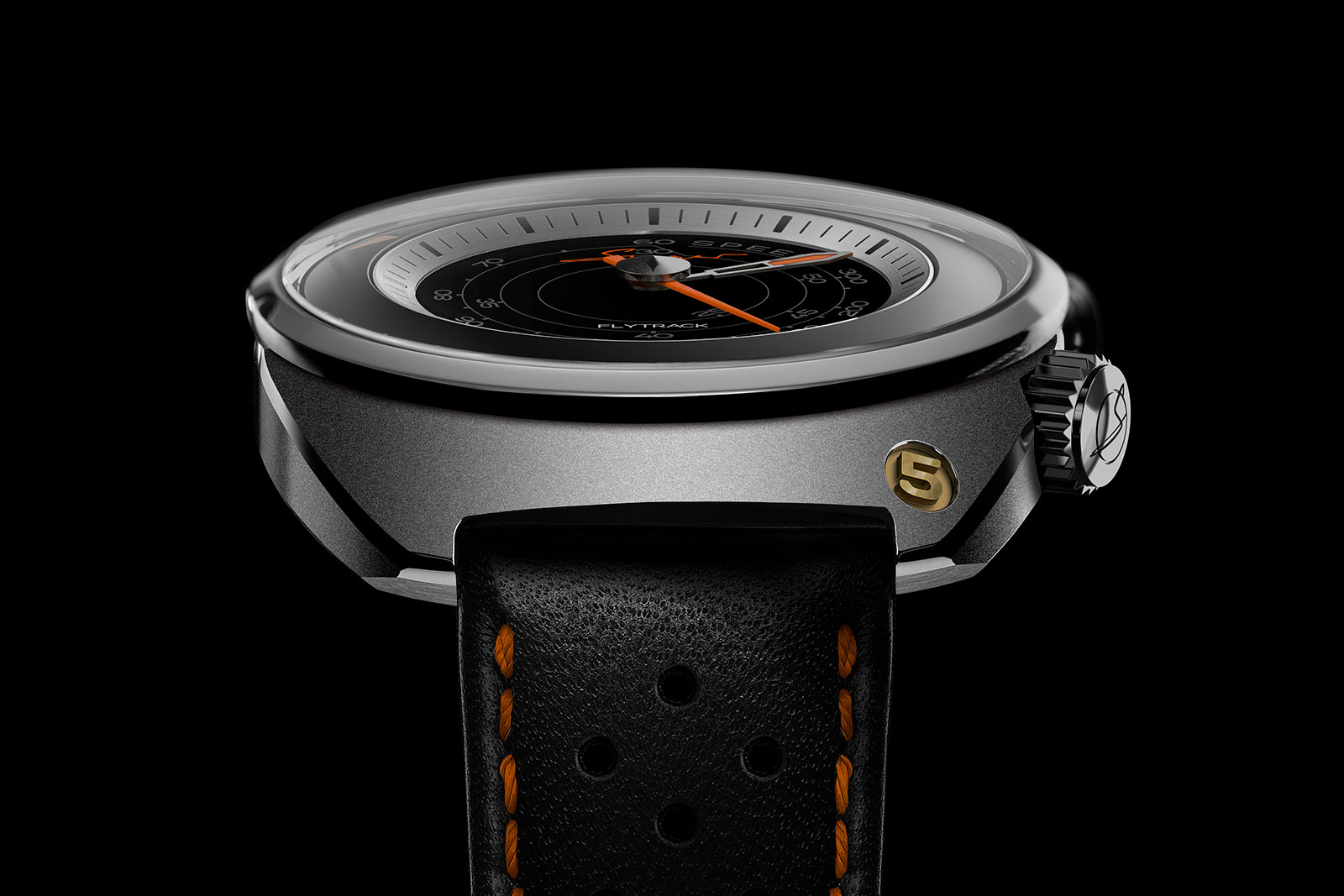 The three versions of the Prime Edition are each conceived to measure specific values, calculated over a short period of elapsed time.

The tachymeter measures the average speed of a moving object over a 1 km distance, which is why it is historically associated with auto-racing chronographs. The telemeter, on the other hand, was often found on military-issue stopwatches for artillery, because it measures the distance between the observer and an event at a distance, which in the case of the Flytrack, is 15 km.

And the pulsometer needs little explanation: it indicates the patient’s heart rate by extrapolating the time taken for 15 beats. Unlike the other two dials that are in black, the pulsometer dial is done in a matte tobacco and matched with a gold chapter ring for the seconds. 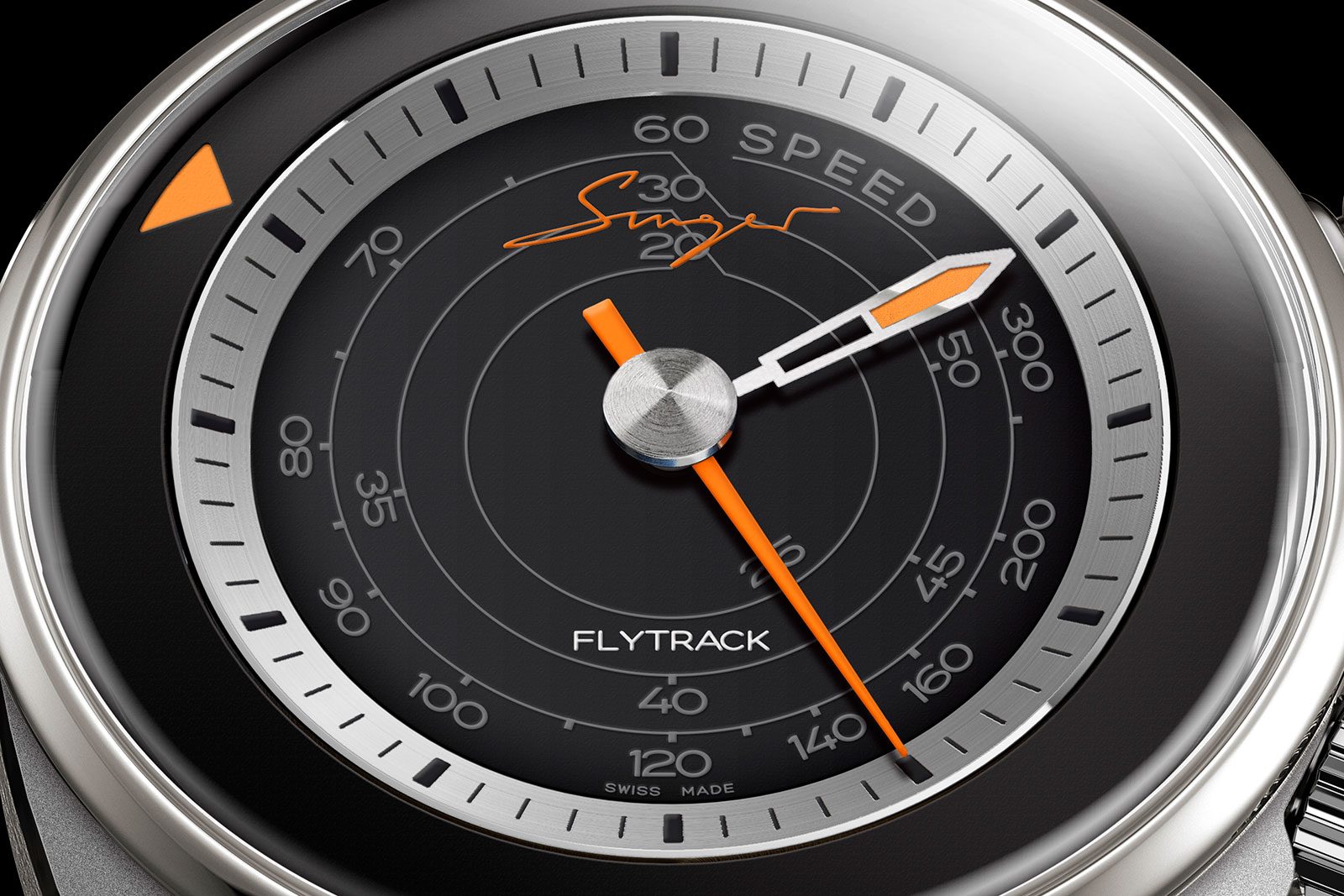 The Flytrack has the same case as the Track 1, but finished substantially differently. Instead of retro-style radial brushing, the Flytrack case is sandblasted titanium with pronounced, polished bevels outlining its edges. Both the material and finish will be found only on the Prime Edition, and the subsequent versions will likely be in steel.

More obviously unique to the launch edition is a 18k gold medallion embedded into the case bearing the edition serial number in relief. Each dial style is a limited run of 10, and will carry medallions numbered sequentially from “1” to “10”. 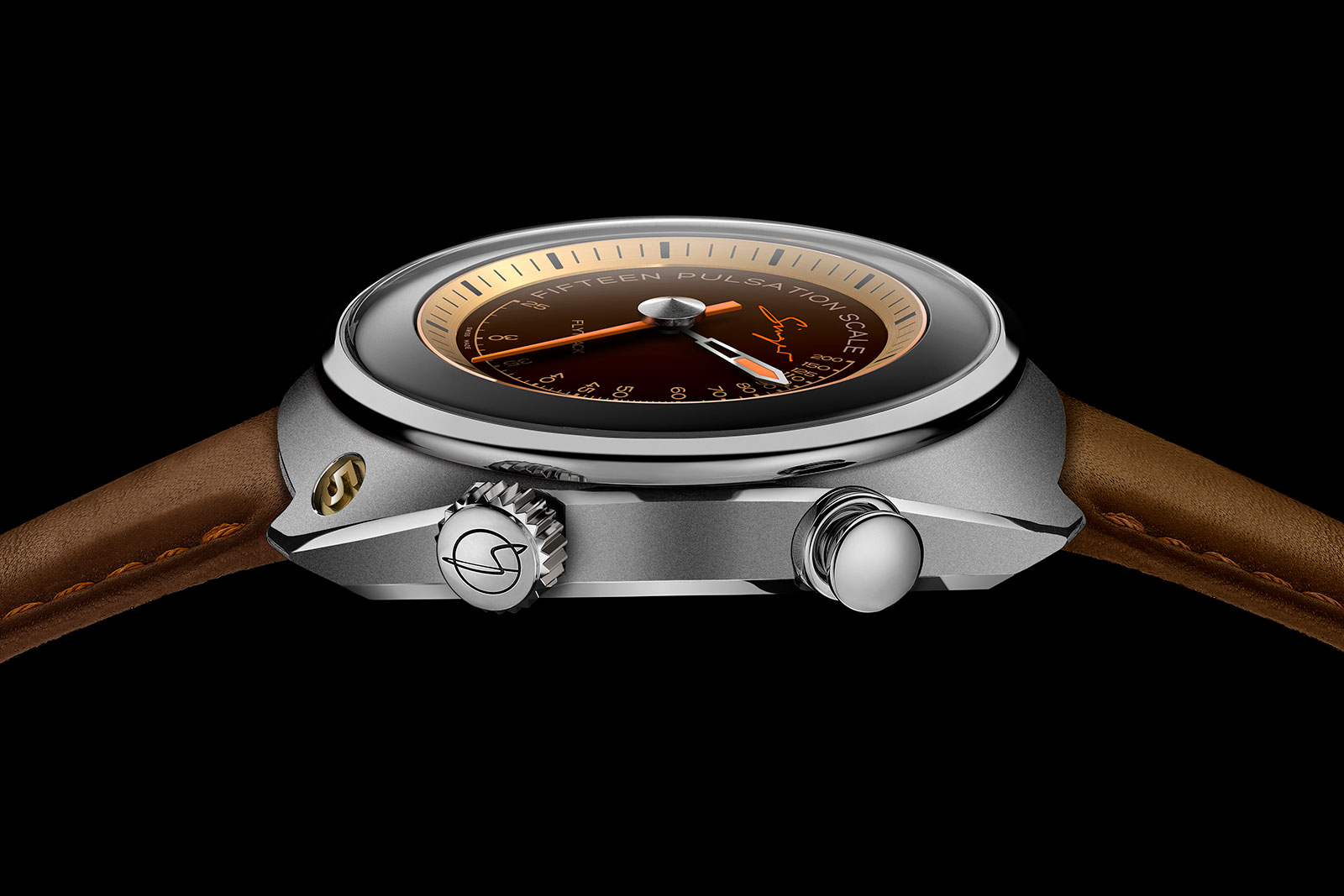 Developed by Geneva complications specialist Agenhor, the AGH 6364 movement is visible through the case back. It’s recognisable as the original AgenGraphe calibre sans chronograph mechanism, with a large, heart-shaped cam in the centre of the movement being responsible for the reset of the seconds hand.

Though simpler, the AGH 6364 is finished to the same standard as the chronograph version of the movement. According to Agenhor founder Jean-Marc Wiederrecht (who has recently retired and succeeded by his two sons), the AgenGraphe movement is decorated to the standards demanded by the Poincon de Geneve (or Geneva Seal), though it has not undergone the certification process. 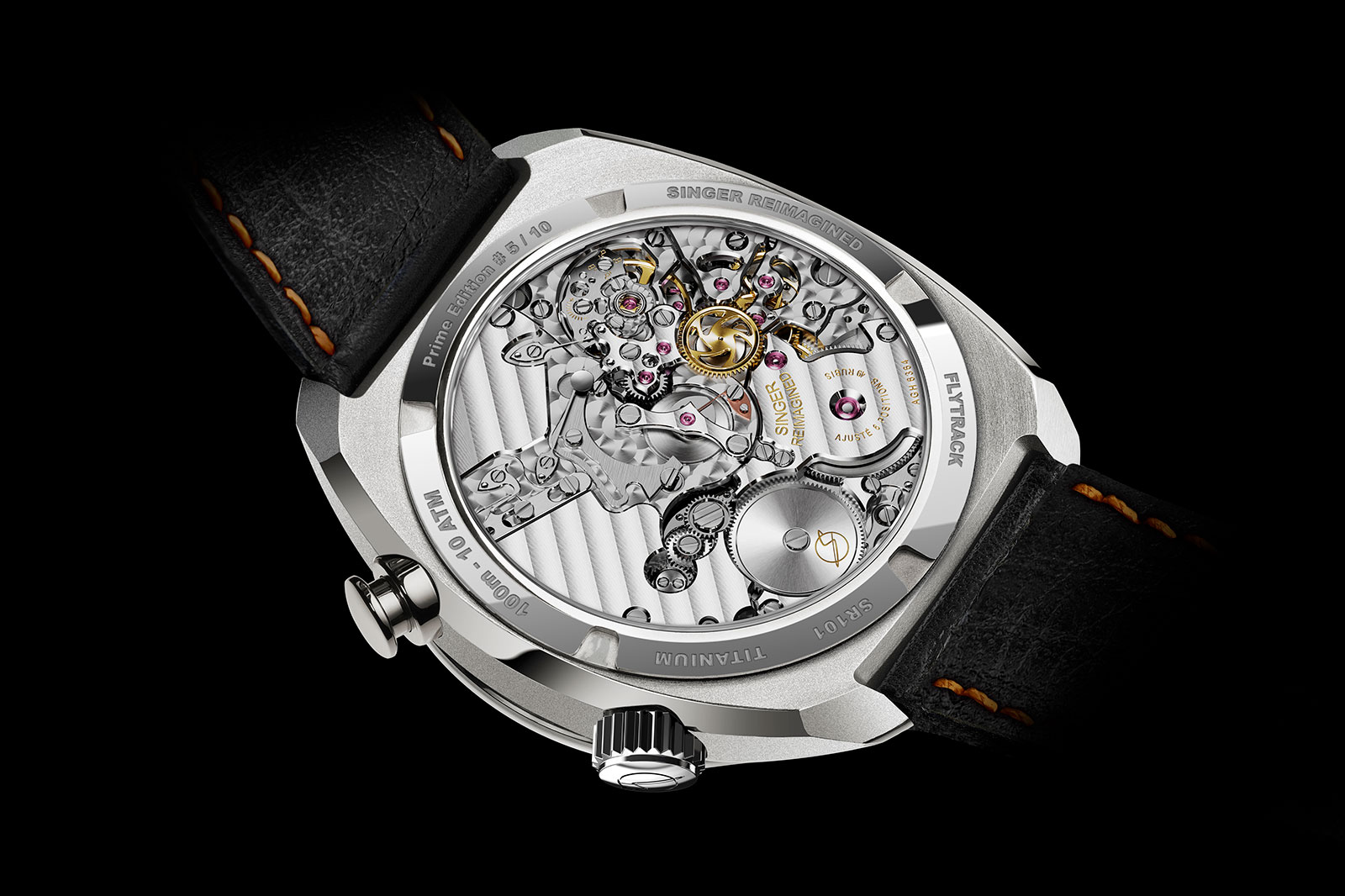 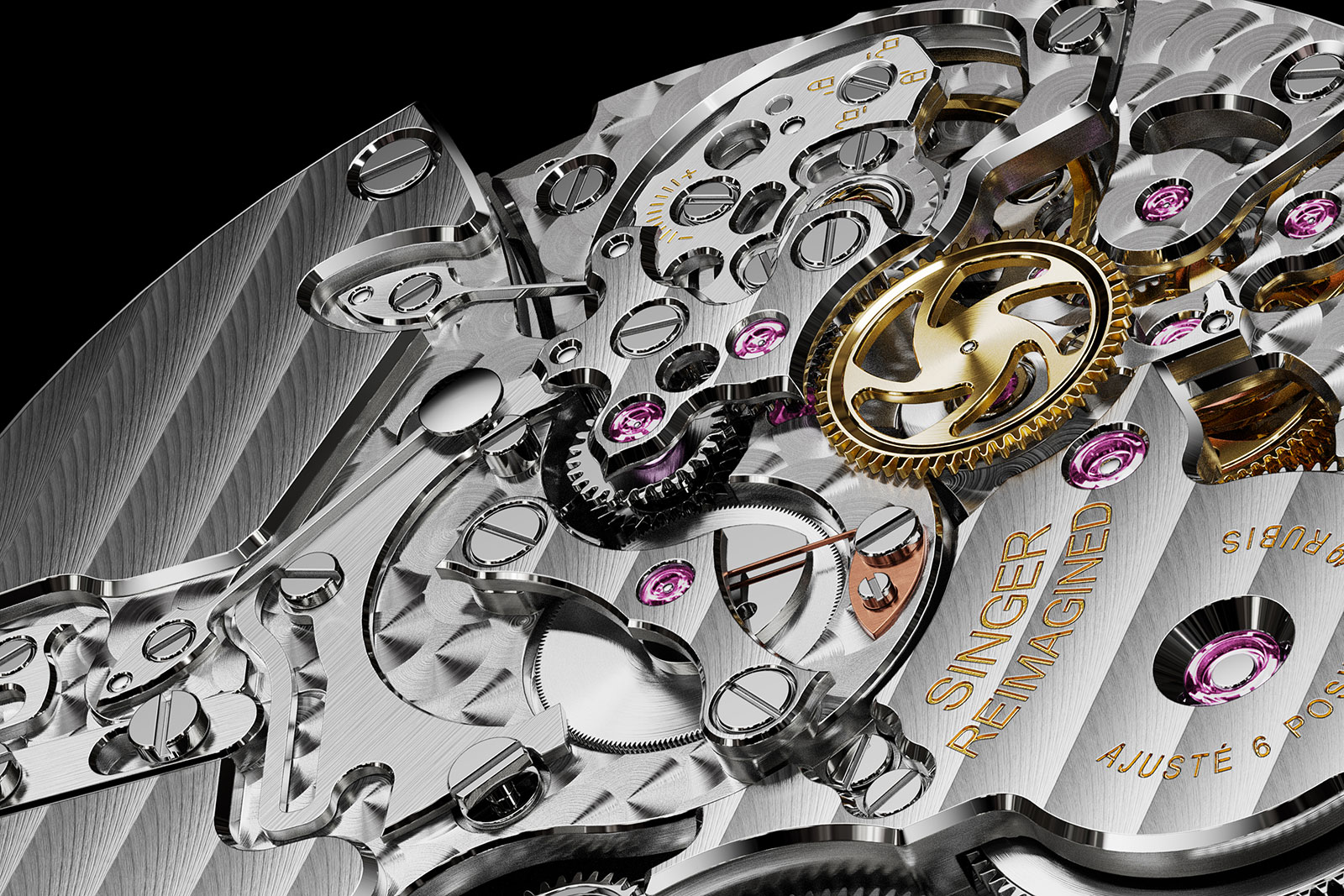 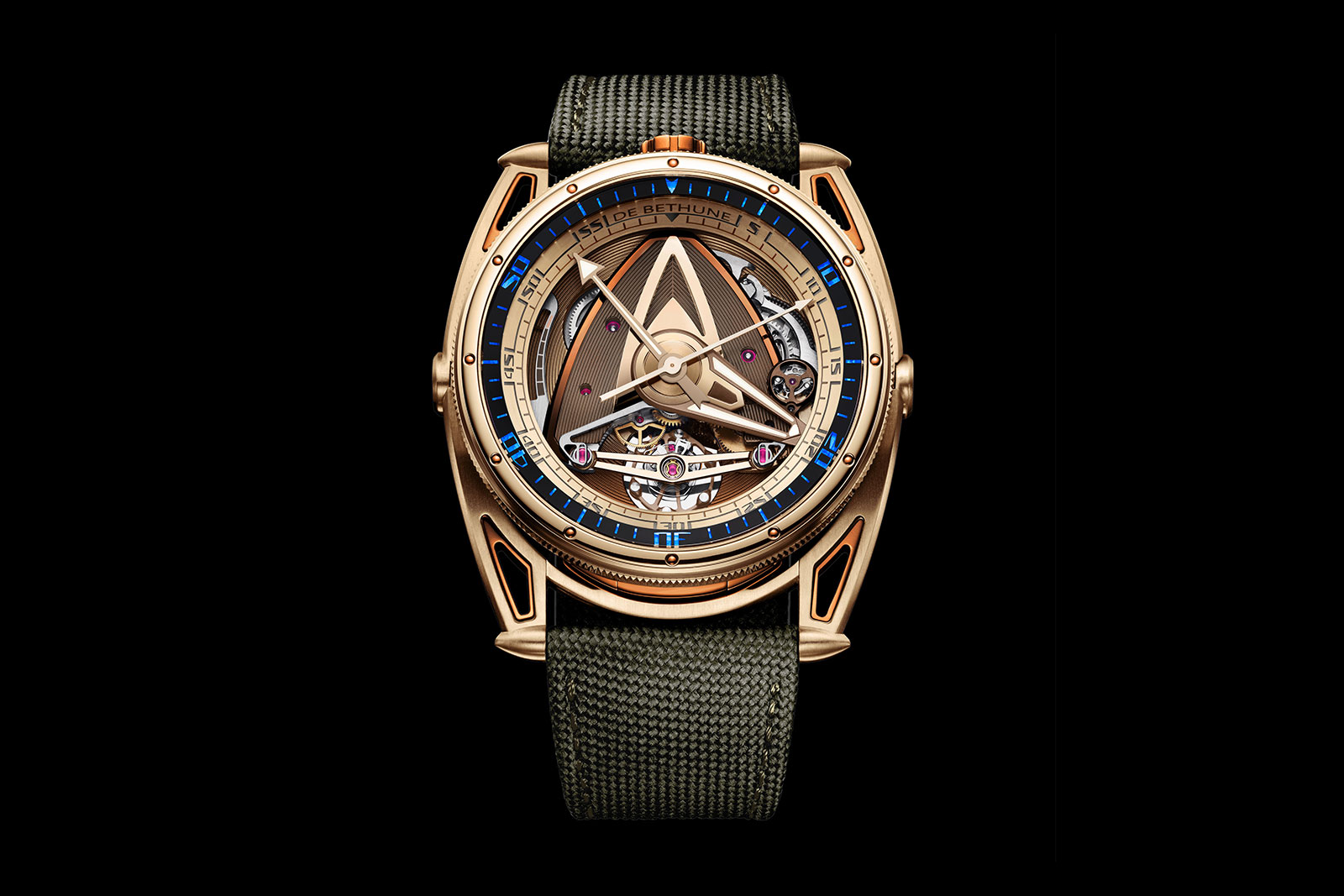 De Bethune builds watches that are deliciously futuristic in form and construction, though it has rarely applied its house style to sports watches. Last year’s DB28GS Grand Blue is a bona fide sports watch, with plenty of water resistance and dynamo-powered illumination.

Now it’s been given a new look with the DB28GS Yellow Submarine, which has a richly-gilded case that is actually titanium heat treated to create a bronze-gold oxide layer on its surface. Measuring 44 mm wide and 12.8 mm high, the DB28GS is even chunkier than most De Bethune watches, which are already quite large. The original DB28GS Grand Blue is mostly a monotonous grey, with some blue accents, giving it a technical, rugged style.

Even though it is just a change in colour, the yellow case of the Yellow Submarine gives it an entirely new look. The gold finish is luxe but more bronze in tone, and also combined with a brushed surface finish, giving the watch a warm, slightly aged look. And the new case colour gives the watch more contrast – it definitely pops – making it more visually attractive than its predecessor.

The original DB28GS was a pricey watch, and so is the new Yellow Submarine. But fortunately it costs almost the same at 95,000 Swiss francs, or about 4% more than its predecessor. 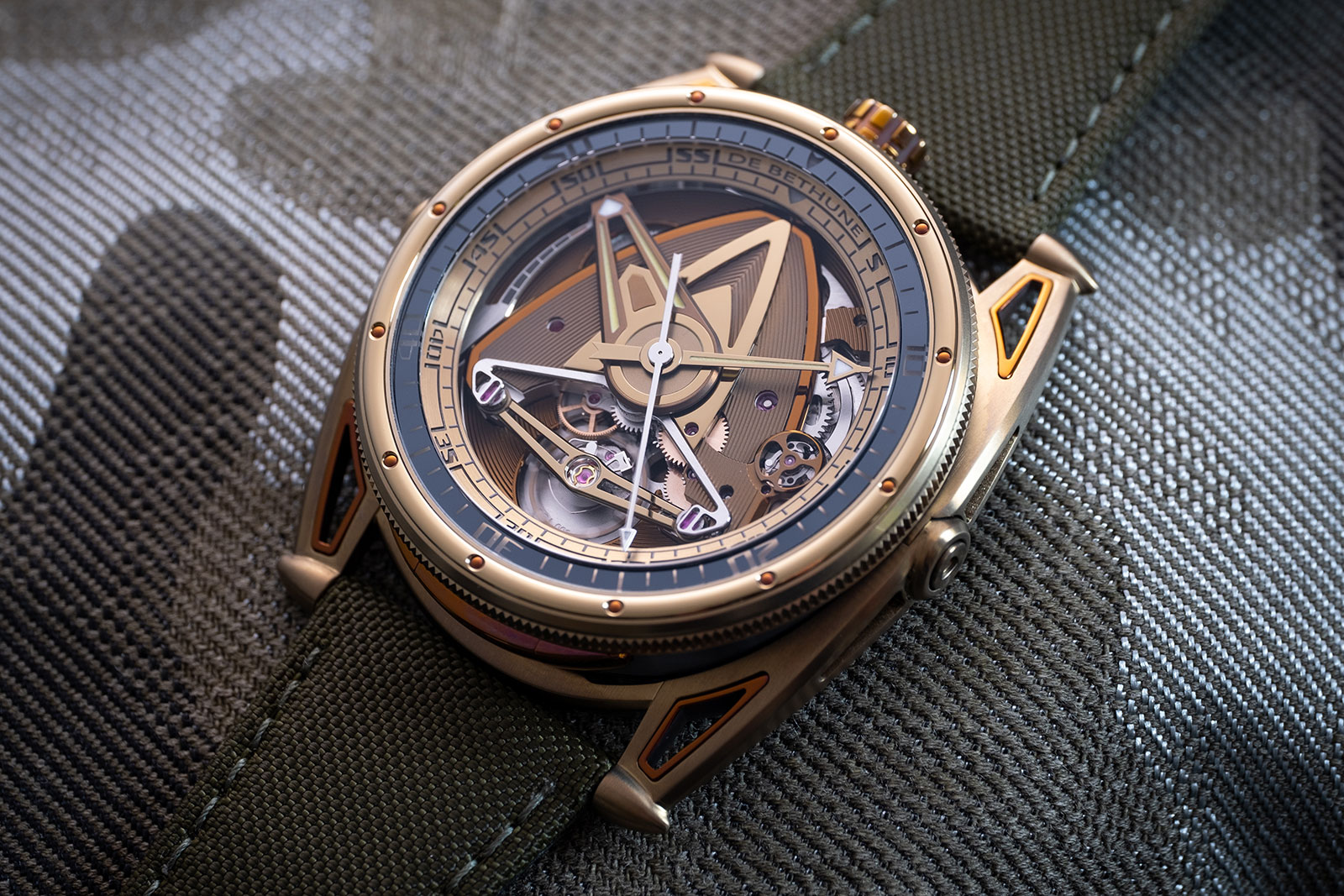 De Bethune’s inventiveness is most prolific in its movements, but also extends to cases. Its signature case material is heat-blued titanium – where the alloy is heated over a flame to create an oxide layer that is a rich, brilliant blue. The yellow titanium case is created in the same manner, but at a different temperature.

As with blued titanium, the various components here require slightly different heat treatment, which results in slight variations of the golden finish, creating a perhaps unintended consequence of extra nuance on the case finish. The case, however, is not entirely golden titanium. Only the bezel, lugs, and back are titanium, while the case middle is black-coated zirconium. Although black and yellow are a good pair for their high contrast, the zirconium is not very apparent as case middle is usually hidden by the lugs, which are the defining feature of the DB28 series. They are spring-loaded and articulating, allowing the largish case to sit comfortably on different wrists.

The rest of the Yellow Submarine is identical to the Grand Blue, but it is hardly dull because it is truly avant-garde. Not only the design language one of a kind, the movement is kitted out with numerous innovations, like the triple “pare-chute” shock absorber and patented balance wheel.

A pusher on the case at six o’clock activates the dynamo-powered LEDs within the case that light up the dial. Pushing the button engages a secondary gear train that rotates coils within a magnetic field, generating the electricity that powers the LEDs.

But the light system is power-hungry and runs off the mainspring, which has a lengthy 5-day power reserve that can still be drained quickly be repeated use of the LEDs. To avoid the mainspring inadvertently going empty, the pusher for the LEDs automatically disengages once the power reserve is down to one day. 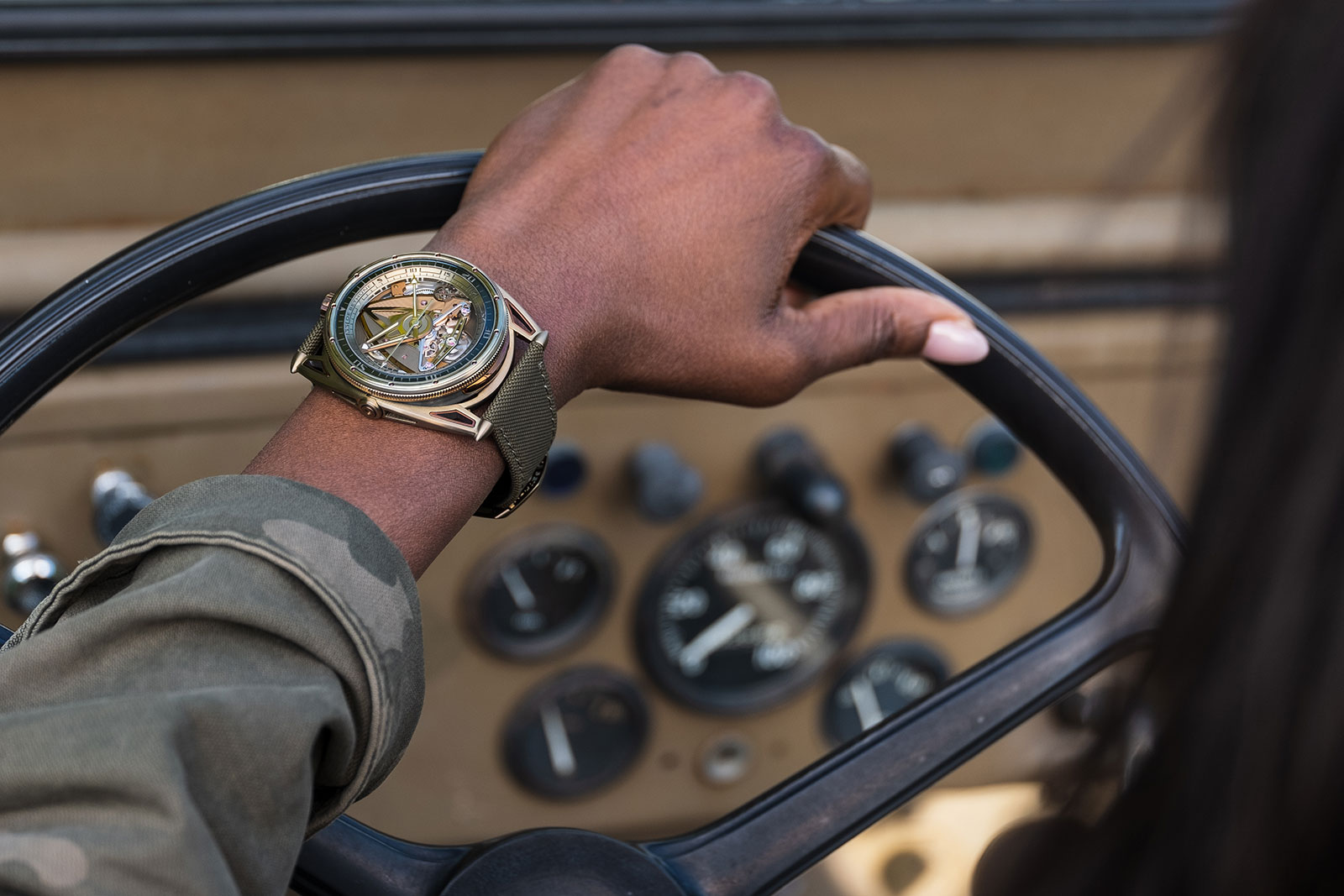