Like its rival the Swatch Group, Richemont was hit hard by the COVID-19 pandemic. The owner of almost two dozen watch and jewellery brands, including Cartier, IWC and Panerai, suffered from widespread store and distribution centre closures, a worldwide halt in tourism, and dampened consumer interest in many of markets, although China was a bright spot.

The group’s business across the world was affected to varying degrees from region to region, depending on a combination of factors, namely the duration of closures, tourist spending, and spending of the domestic buyers.

Although Richemont reported double-digit sales declines across all regions, distribution channels and business areas, the decreases were less pronounced in the Middle East, Africa, and Asia Pacific – the latter benefitted from a 47% year-on-year growth in sales in China, which exited its lockdown earlier than the rest of the world.

China’s performance helped keep sales in the Asia Pacific resilient, to a degree. Sales in the region decreased by 29% at actual exchange rates to €277m, declining in all Asian markets, except China.

Amongst the hardest hit were Japan and the Americas, where sales dropped 62% and 60% respectively due to widespread closure. Because of store closures, online retail sales received a small boost compared to other distribution channels. Excluding online distributors – Watchfinder and Yoox Net-A-Porter – online sales contributed 8% of the group’s sales compared to 2% in the year before.

Retail sales at its own boutiques were lower around the world, but once again did well in some Asian markets, with strong increases in China and South Korea. And continuing  trend that has persisted in recent quarters, Richemont’s retail business continued to do better than its wholesale business – which refers to sales to third party distributors or vendors – retail and wholesale revenue both decreased, but by 43% and 65% respectively.

The jewellery division of Richemont, dominated by Cartier and Van Cleef & Arpels but also including Buccellati, continued to outperform its watch brands. The jewellers saw their sales fall 41%, while the figure at the watchmaking division was 56%.

Once again it was China that mitigated declines elsewhere. Sales for its jewellers increased 68% in China over the period. The strong performance was attributed to both brick-and-mortar and online spending, namely the virtual Cartier “flagship store” that opened in January 2020 on Alibaba’s TMall Luxury Pavilion platform. Despite being only 18 years old, De Bethune has managed to create a surprisingly large number of unique and emblematic case designs, along with a slew of complications and movement innovations. But its signature case design is probably the DB28, a large, thin watch with a pair of sprung, pivoted lugs.

For the 10th anniversary of the DB28, De Bethune has slimmed it down to create the DB28XP. Significantly thinner and slightly more wearable, the DB28XP is still instantly recognisable for what it is. The DB28XP is a smartly conceived watch because it manages to capture everything that made the DB28 special, except in a thinner case that feels more refined and is clearly more elegant. The original DB28 wasn’t excessively thick, but the DB28XP is substantially thinner, thin enough it feels a little like a sci-fi dress watch.

The DB28XP wears sleek and light, with the “floating” lugs hugging the wrist comfortably, while the aesthetic is clearly quintessential De Bethune, which means polished or heat-blued titanium.

And though it’s slimmer than the original, the DB28XP is still executed to the same level of quality, down to the smallest of details. The teeth of the barrel ratchet wheel of the movement are polished, for instance, while the hands are either polished titanium or pink gold, depending in the version. 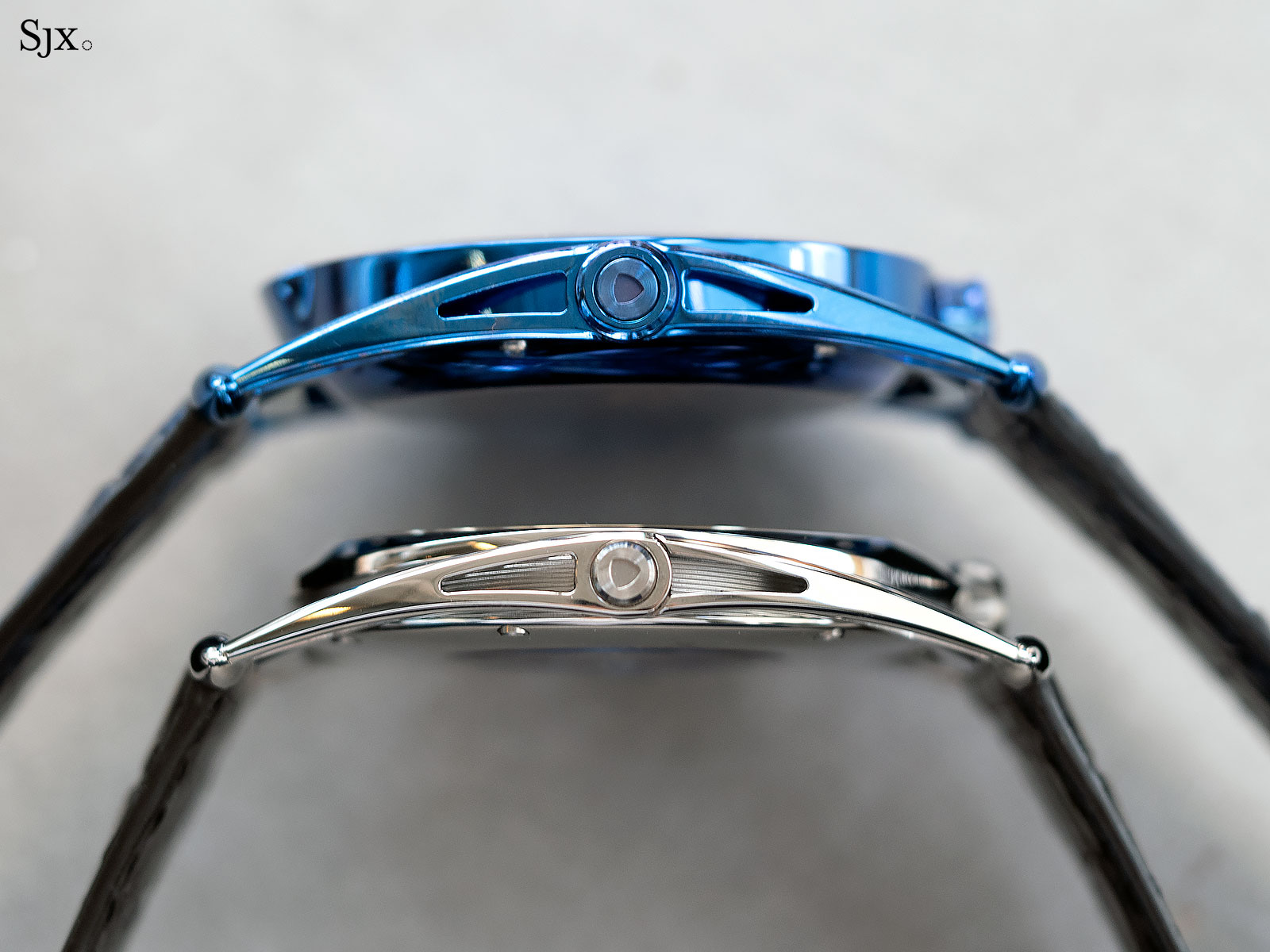 But the DB28XP is a little fancier than the original in design, with additional elements to dress it up like the crown guards or fluted case band. The additional bits feel like unnecessary additions to an already-strong design. Are they really needed?

It’s more of a philosophical question that goes back to the origins of the brand. De Bethune’s inimitable style and creativity is down to its cofounders, watchmaker Dennis Flageollet and watch expert David Zanetta. A limited edition variant of the original DB28, this one the Steel Wheels Blue that’s almost entirely in heat-blued titanium

While Mr Flageollet was no doubt the technical genius behind the brand, its house style was shaped by Mr Zanetta, one of the world’s leading vintage watch dealers in the 1970s and 1980s.

His knowledge of antique pocket watches and vintage wristwatches explain the historical elements – ranging from 19th century Breguet to 1920s Cartier – found in many De Bethune’s space-age designs. But amidst financial struggles at the brand, Mr Zanetta sold his stake in 2017, though Mr Flageollet remains. I once asked Mr Zanetta a perfectly reasonable question, and he swore at me, as he frequently did. I instantly knew he was a watch-industry original and he became one of my favourite people in independent watchmaking.

He had a very clear aesthetic vision for De Bethune that was often extreme – streamlined meant hyper-sleek cosmic seashell and ornate was intricate Mayan engraving somehow related to the end of the world.

At another time, I asked him why he only made relatively large watches, especially since some clients asked for smaller ones. His response was predictable and naturally including swearing. But he did eventually make a smaller DB25, including a gem-set version inspired by vintage Cartier pocket watches.

So the DB28XP is something that is in keeping with the brand’s original style, but it probably wouldn’t have had the extra bits, since the original DB28 was already beautiful and concise. But that doesn’t take away anything from the watch itself, which is marvellous in every tangible aspect.

The DB28XP – “XP” is short for “extra plat”, French for “extra flat” – is available in two guises for now. A standard version with a mirror-polished titanium bridge on the dial, and the DB28XP Starry Sky that has a titanium dial embedded with solid-gold stars. And there’s also the DB28XP Tourbillon, which I’ll cover some time in the future. Both versions have the same case that measures 43 mm and just 7.3 mm high. Notably, the DB28XP is actually slightly larger than the original DB28 in diameter, at 43 mm against 42.6 mm, but the difference is impossible to discern. The case is a full 2 mm thinner, something that is obvious right away.

The DB28XP is wonderfully thin, looking and wearing smaller than it measures. Though the DB28XP wears very much like the original DB28, but it is clearly more compact and agile, and it feels good on the wrist.

The construction of the case is also similar to the original, as is the first-rate finishing. All surfaces of the case are mirror polished, leaving no imperfections visible. Even the case back is dressed up, with a blue titanium ring and “microlight” engraving on its centre. 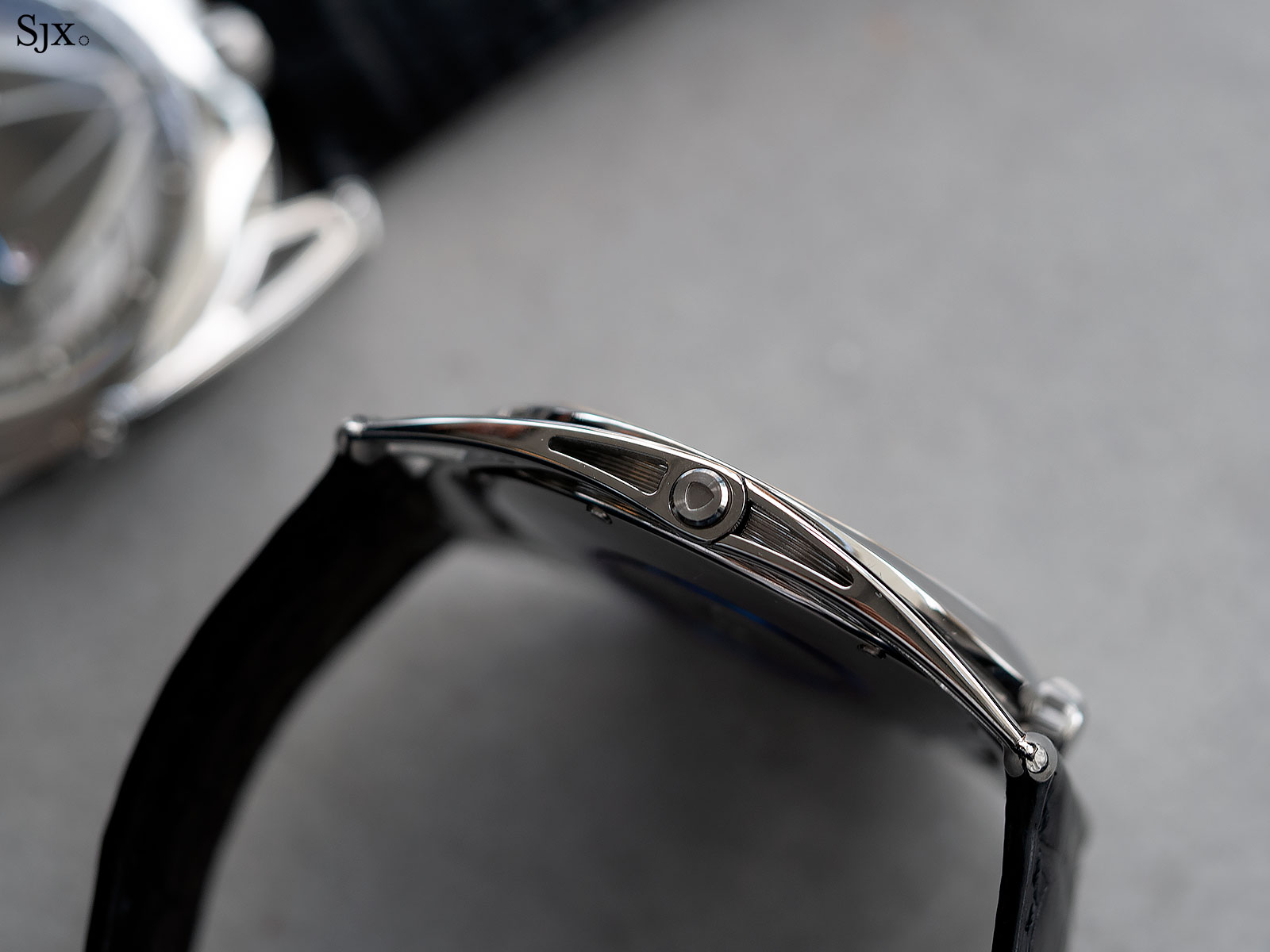 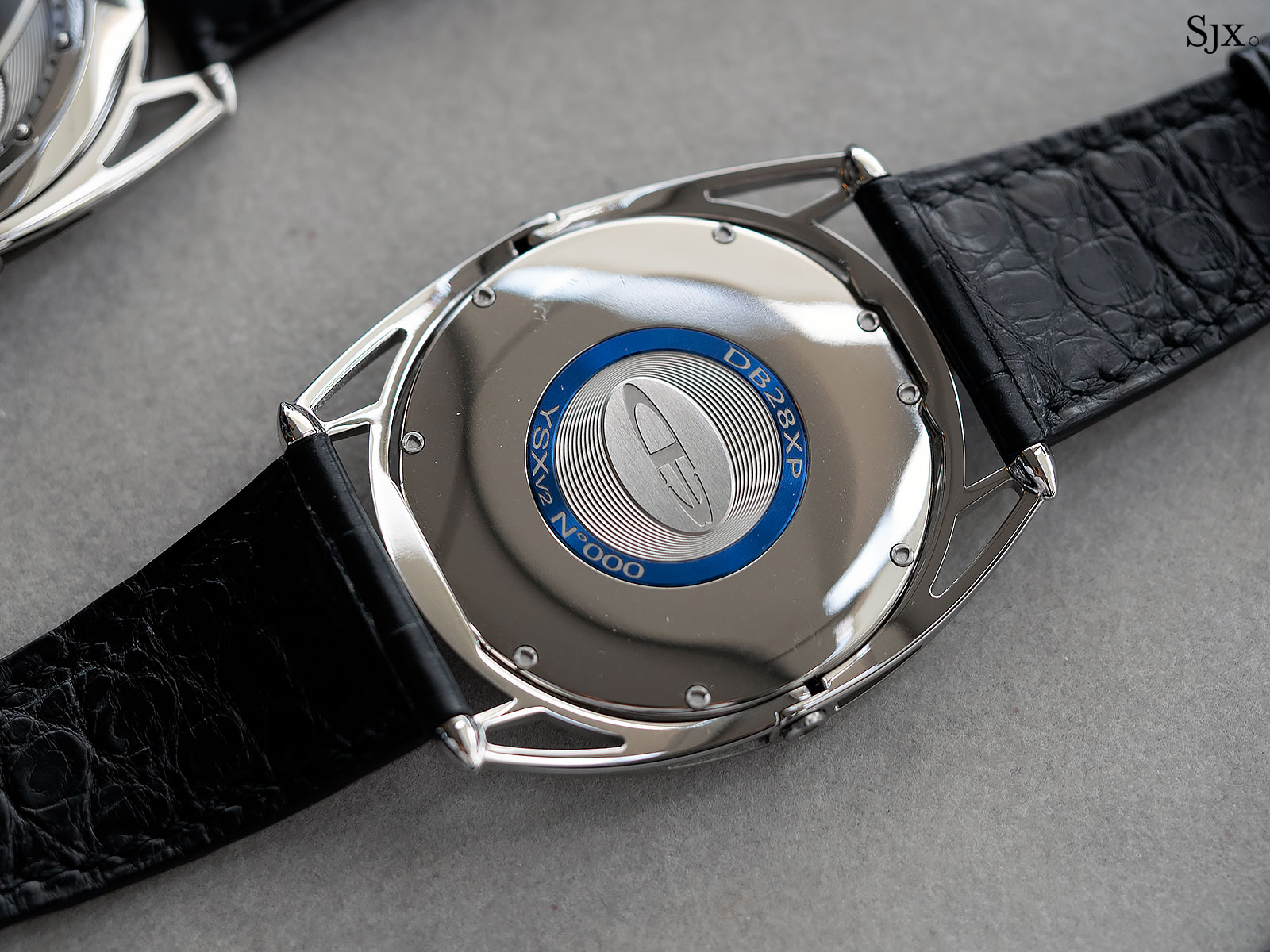 The case back is very slightly domed, with the De Bethune logo ringed in blue titanium and “microlight” engraving

But the case is slightly less streamlined than the original DB28. The DB28XP has crown guards for the 12 o’clock crown, along with narrow, horizontal fluting on its case band.

Though I would have preferred a clean case flank, the fluting emphasises the slimness of the case so it has an aesthetic purpose. The crown guards, however, break up the circularity of the case.

I can imagine they were installed to raise the crown, in order to make it easier to access – winding the original DB28 is a bit of a chore – though they don’t really help much. The crown on the DB28XP is proportionately smaller, and still fairly close to the strap and lugs. 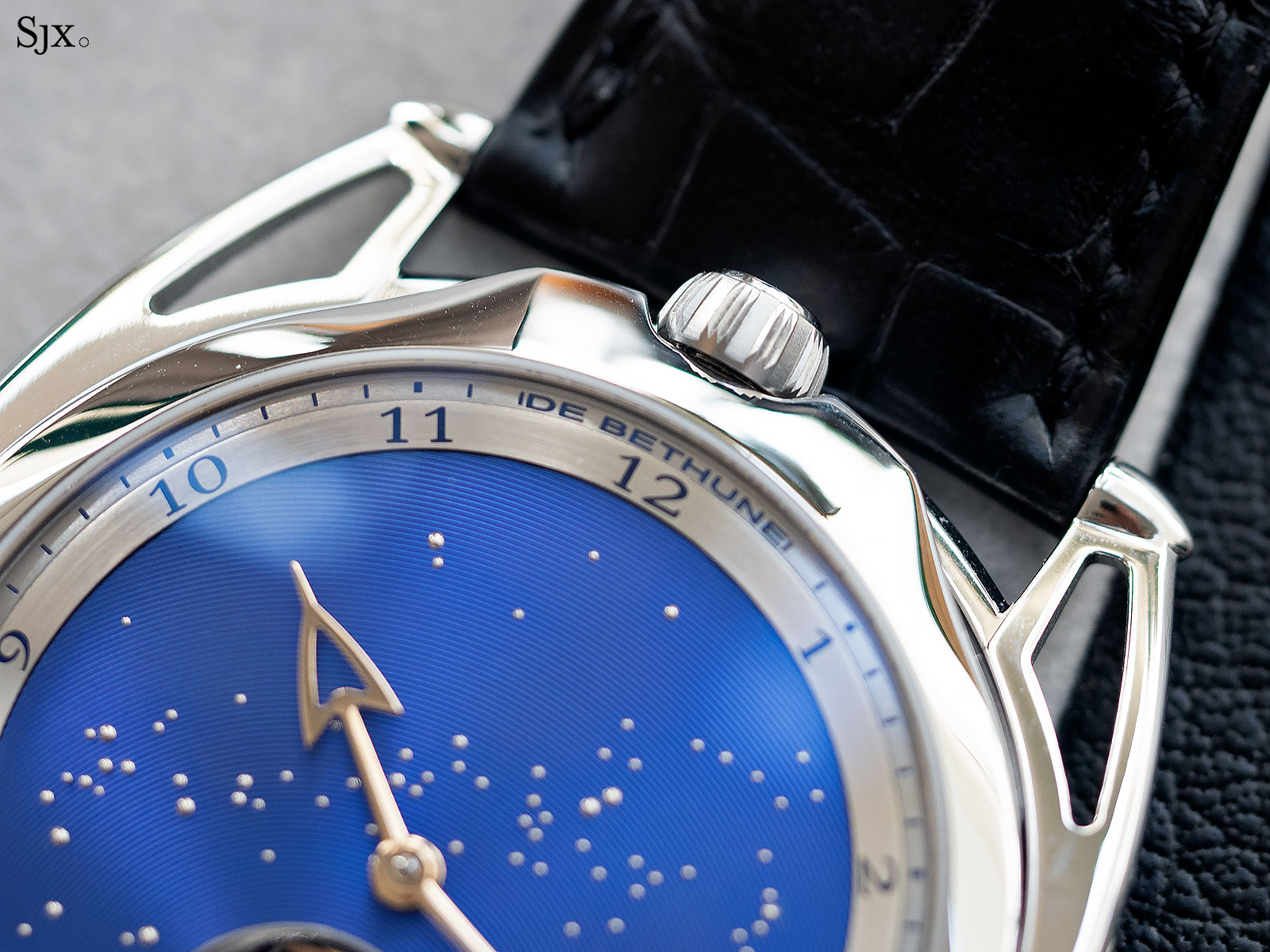 Both versions versions of the watch cost the same, but look very different.

The Starry Sky is more striking, with its blue dial featuring a fine, concentric “microlight” decoration and tiny white gold stars. The starry-night-sky motif is very much a De Bethune signature, as are the delta-shaped hands and balance bridge.

But the Arabic numerals on the brushed titanium chapter ring look out of place. The numerals are not obvious, or even apparent, at first glance – the blue central portion is that striking – but once you notice them the classical style of the numbers don’t quite fit the rest of the dial. 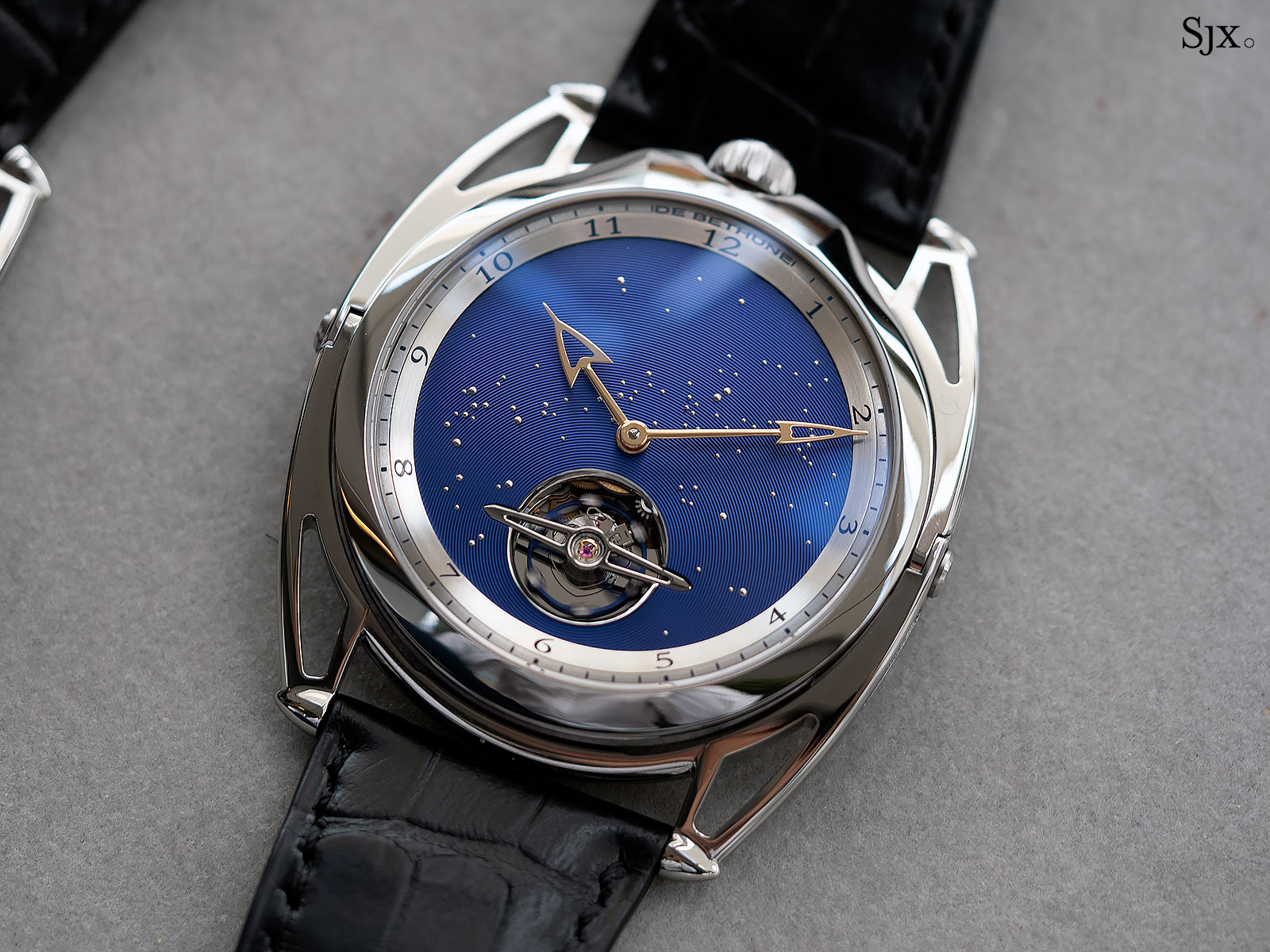 The hands are solid pink gold

The polished-titanium dial is arguably a more traditional look for the DB28. Here the look varies slightly from the original DB28, with the delta-shaped bridge sitting on a base finished with “microlight” decoration.

It is almost monochromatic and entirely silvery, save for the blue titanium balance wheel and blued inserts on the hands. But because of the mirrored finish on the dial and case, the watch has presence on the wrist.

My vote would be for the polished-titanium dial, which is quintessential DB28. And De Bethune offers a variety of other models that arguably look better with the blue, starry-sky dial. The DB2115v6 inside is typical of De Bethune’s movements – visually attractive and endowed with numerous proprietary features.

It includes several patented inventions: a balance wheel made of blued titanium with white gold weights, a hairspring with flat terminal curve, and the triple pare-chute shock absorber for the balance. And like many of De Bethune’s other movements, it has a silicon escape wheel. One side of the triple pare-chute shock absorber, at the end of the balance bridge On the Starry Sky the triple pare-chute is hidden under the dial, leaving only an open-worked balance bridge visible

The movement is hidden under a display back, but going by De Bethune’s past work, it is no doubt finished well. De Bethune uses a combination of manual and mechanical decoration on the movement, but done to a higher level than most of its peers.

The teeth of the barrel ratchet wheel, which are visible on the dial, are polished, while visible jewels sit in moire polished countersinks. This particular DB28XP shown in the photographs is a prototype, explaining the imperfectly mirror-polished delta bridge that has an “orange peel” texture. But De Bethune’s production pieces are typically impeccable polished. All in all, it’s an impressive movement that lives up to the price of the watch. The only weakness is perhaps the use of silicon; replacement silicon parts might be difficult to obtain in the distant future if De Bethune is no longer in business.

It’s difficult not to like De Bethune’s watches, because the brand does them so well. Even there are some criticisms to be made of the DB28XP, it is still done very well. The DB28XP is essentially the ideal watch for someone who wants the signature De Bethune style and quality in a slimmer package that approximates the feel of a dress watch, but with cutting-edge watchmaking and design.

Availability: From De Bethune and its authorised retailers
Price: US$79,900