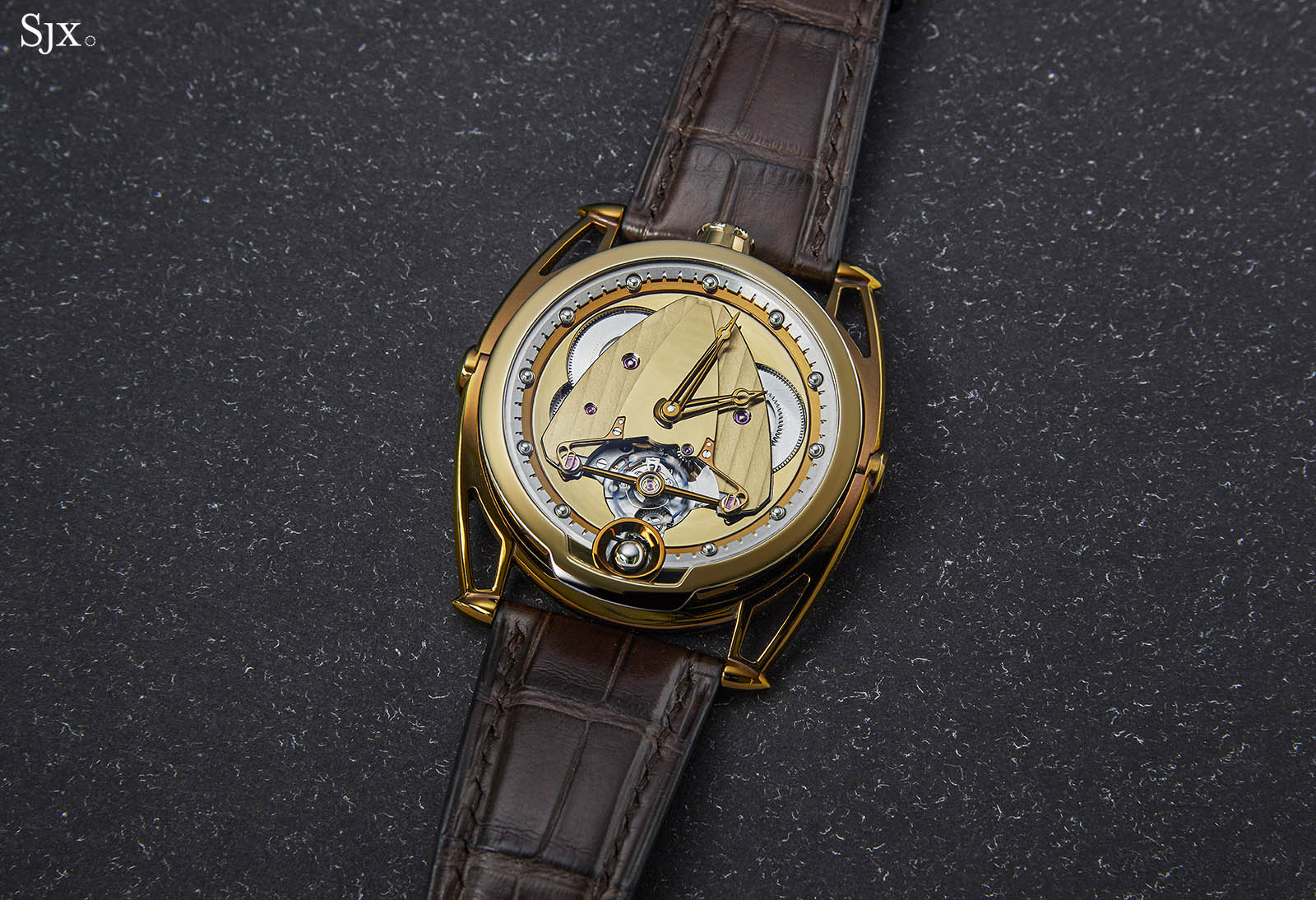 Even amongst avant-garde watchmakers, De Bethune stands out for its substance – aesthetic and material innovation matched by technical ingenuity. At its core, the brand has reimagined the most fundamental aspects of mechanical timekeeping, from the barrel to the hairspring, while pushing the boundaries of traditional complications, be it the moon phase, tourbillon or chronograph.

But arguably its most distinctive innovation is an aesthetic one, which has come to define the brand no less – heat-blued titanium. The brand has used the alloy for more than 15 years across various parts of the watch, even making almost a whole watch out of it. But now De Bethune has a twist on the theme, resulting in the DB28 Yellow Tones in brilliant golden titanium. 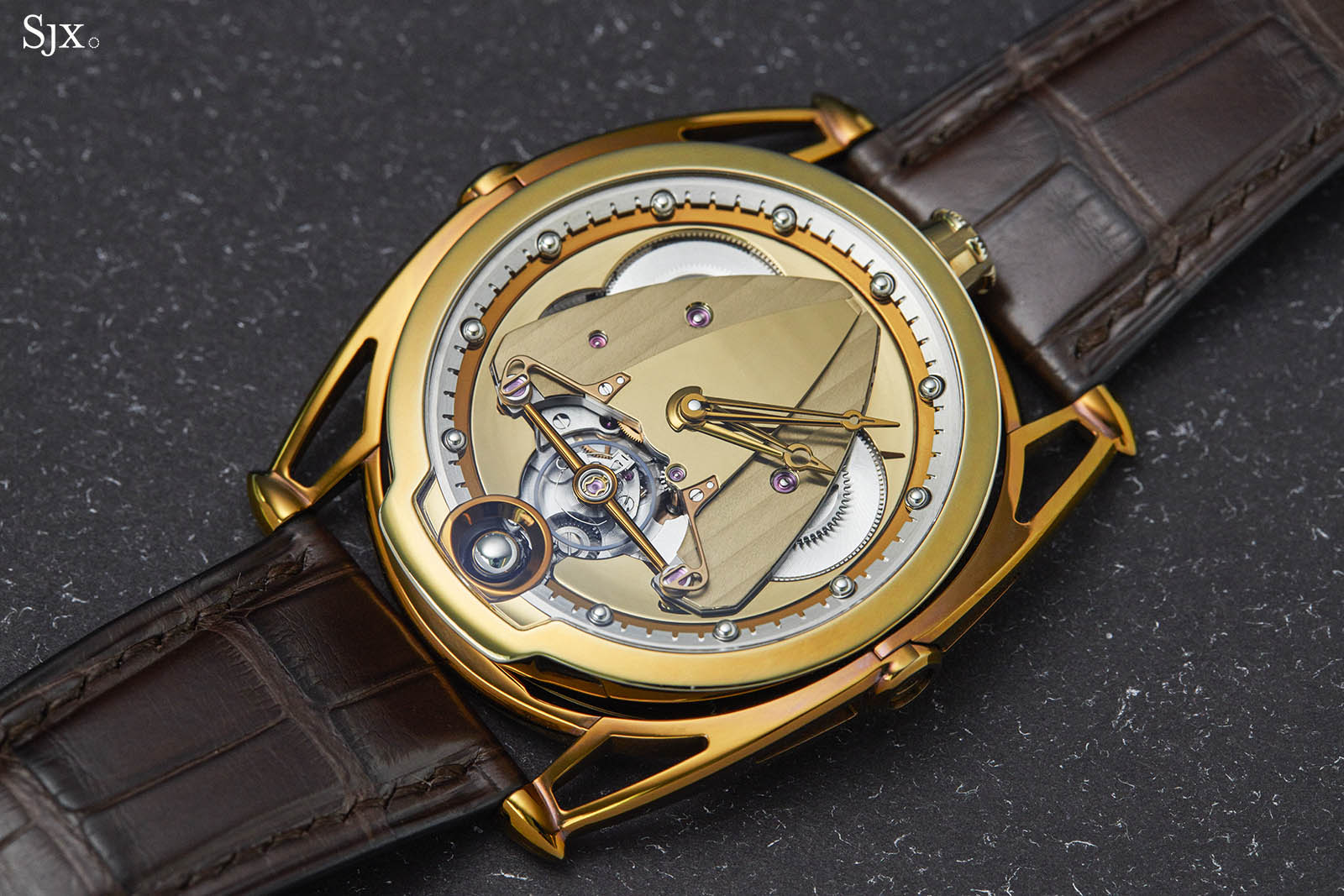 Though the colour of the new DB28 is striking, it is by no means loud, as the amber shade of yellow isn’t the same as yellow gold and doesn’t pass off as such. In fact, it looks more like fresh brass than gold.

The colour was achieved through thermal oxidisation of the surface, essentially the same process as that used for blued titanium (and also the same for blued steel). The yellow surface, just like the blue, is the result of an oxide that forms on the surface of titanium when it is heated to a certain temperature. But amber yellow tone in this case was created by heating it at a lower temperature than used for blued titanium.

Titanium undergoes different stages of oxidation when heated, and yellow is one of the first colours that is achieved, followed by brown, purple, dark blue, light blue, green, yellow again, pink, magenta, blue, cyan, and yellow green. The higher the colour on the spectrum, the harder it is to achieve, especially with consistency across samples.

However, a higher temperature also induces the formation of a thicker oxide layer, which would mean that yellow is less resistant to scratches than blue. 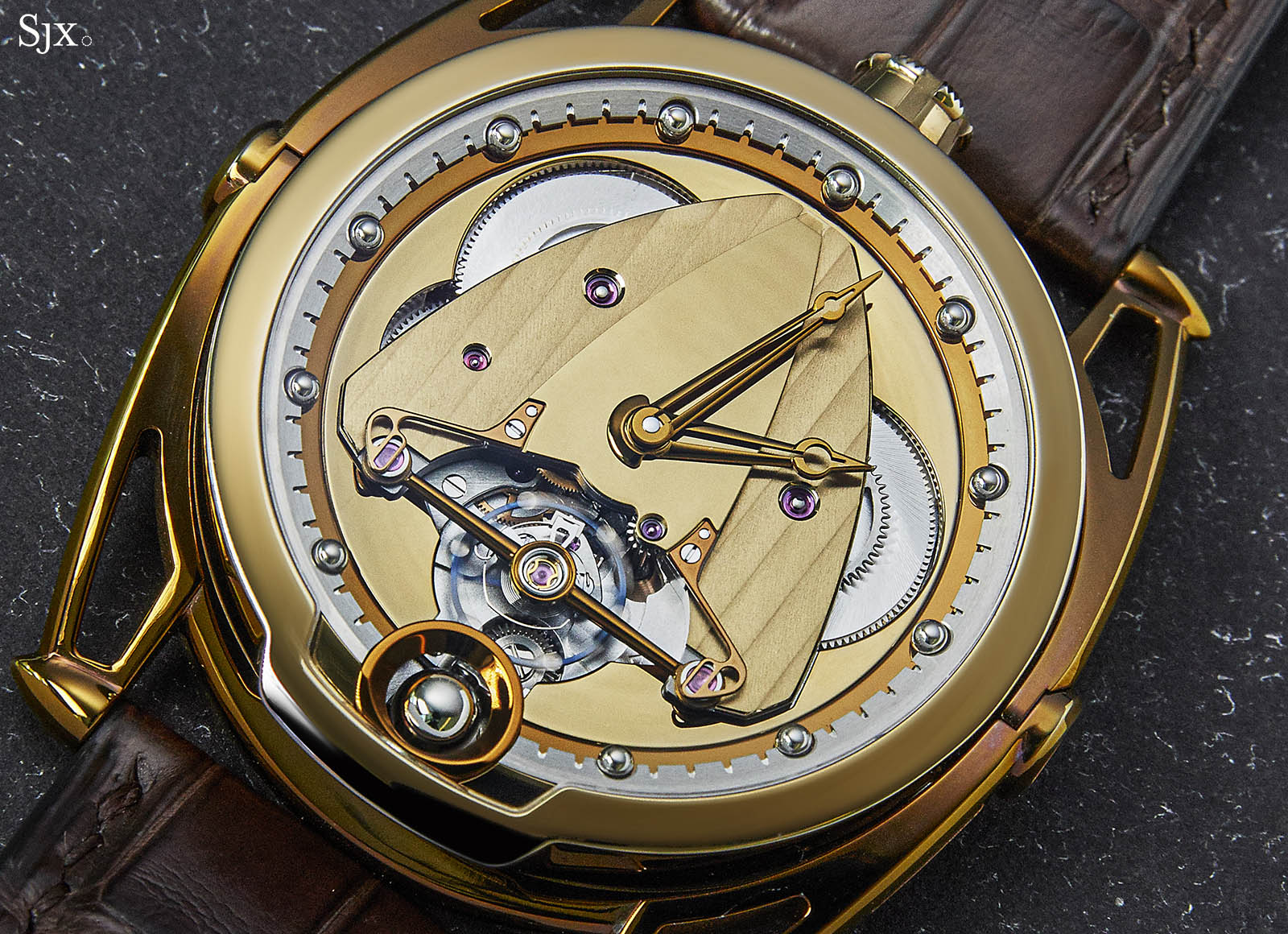 The barrel bridge is finished with Cotes de Geneve, and the narrow triangular plate over it is mirror polished

Most of the front of the watch is yellow – the case middle, lugs, chapter ring, base plate, moon sphere, hands, delta-shaped barrel bridge, and the balance bridge.

Though the parts are made of different metals, the lugs are titanium while the balance bridge is steel, they are finished the same way: first mirror-polished, then cleaned, and finally heated individually by hand. As the components vary in shape, size and metal, the process had to be calibrated for each part. 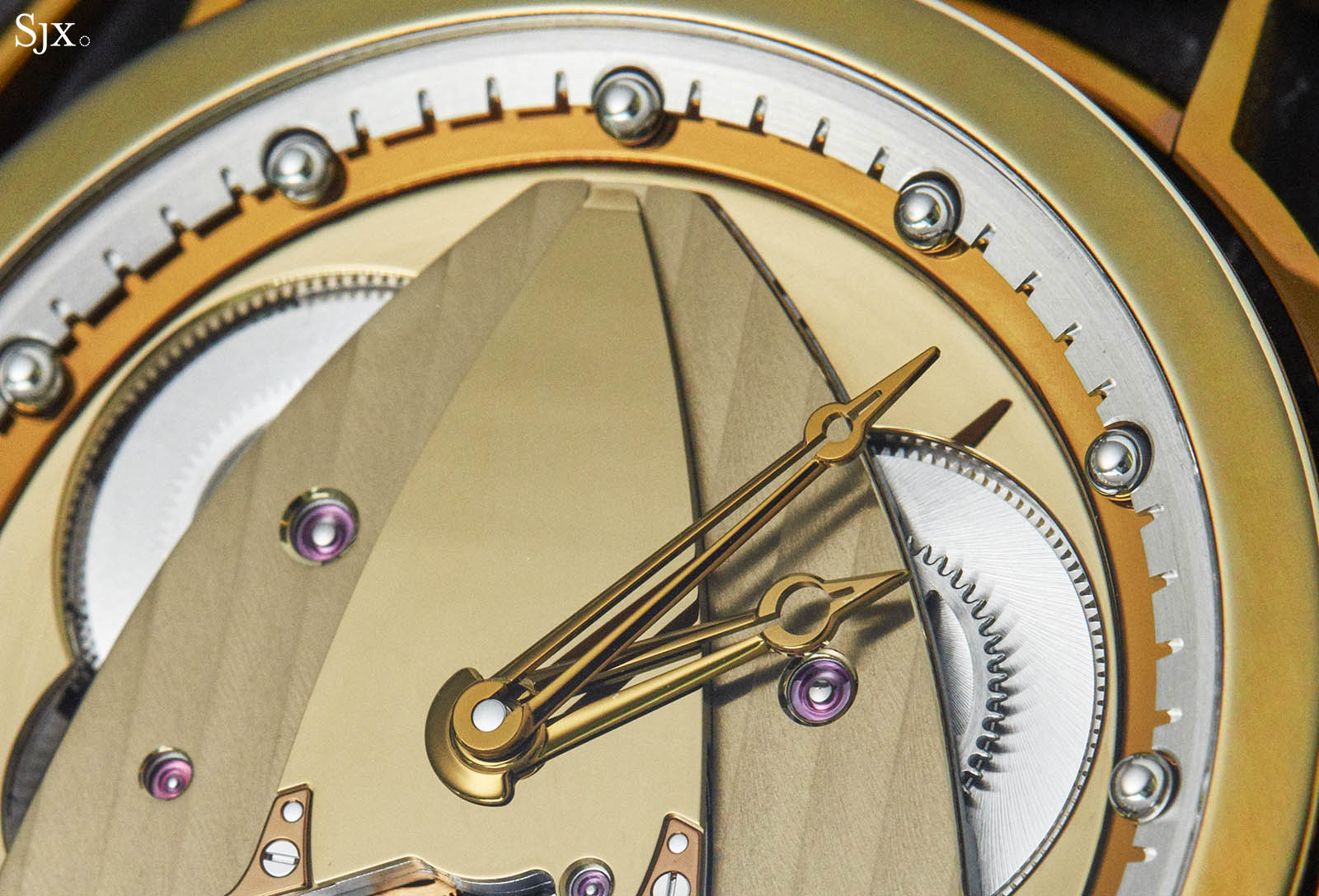 As the process is done by hand, even if the metal is the same, the colour will differ. So the result is an array of golden yellow tones that vary slightly from each other, lending the watch more depth and definition.

However, as mentioned above, the yellow finish is a surface treatment that does not change the metal below.  It’s therefore liable to scratches and chip, which reveals the natural colour of the metal below.

The only way to fix that is lengthy and expensive: remove the yellow layer, polish the part to remove the scratch, and then redo the heat treatment. The easier solution is to wear the watch very, very carefully. 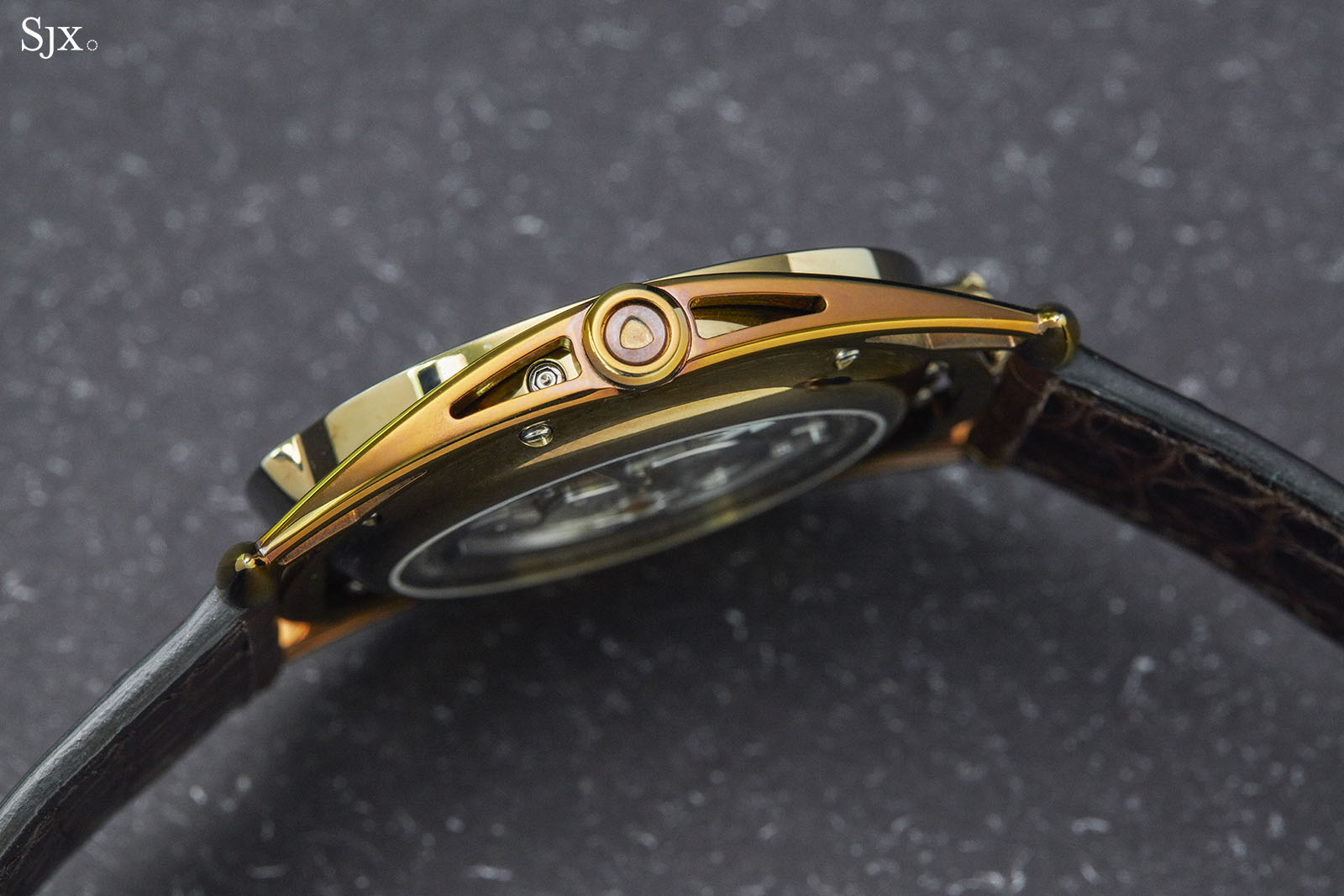 Measuring 42.6mm wide and 9.3mm in height, the watch no doubt has an imposing presence on the wrist, but it is slim, elegant and sits flat on the wrist.

One of its most notable features is the ergonomics of the case, which fitted with sprung, hinged lugs that hug the wrist. The “floating” lugs were patented in 2006 and first introduced on DB26 perpetual calendar two years later.

Though the lugs on the new DB28 looks pretty much the same, they are actually the second generation design that’s been reshaped and resized. Now the lugs feature the brand’s signature “bullet” tips at the ends, a feature previously only found on De Bethune watches with fixed lugs.

More importantly, the new lugs are “intermediate” size, in contrast to the previous two options for lugs, long or short. The medium-sized lugs falls somewhere in between the two, giving the watch an effective length of 51-55mm depending on the position of the sprung lugs. 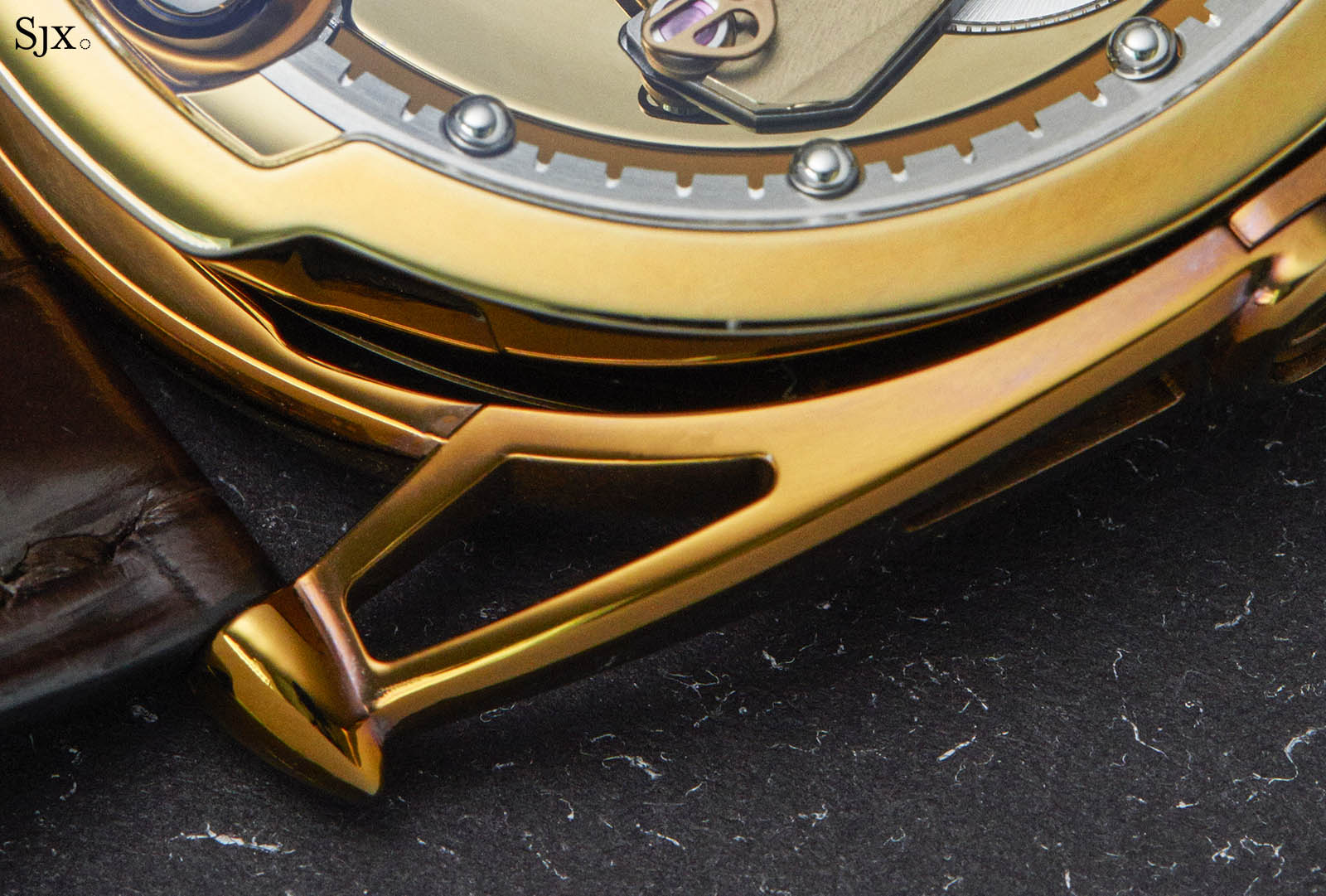 One of the most impressive aspects of De Bethune watches is the concentration of in-house innovations in a single movement.

Despite being just a two-hander with a moon phase, the hand-wound cal. DB2115V4 boasts a total of five inventions, four of which – the titanium balance, triple “pare-chute” shock absorber, hairspring and spherical moon – are patented.

On the dial, the pair of mainspring barrels, offering a six-day power reserve, are visible on each side of the triangular barrel bridge. Six pallet jewels are incorporated inside each barrel, arranged like a three-pointed star on both the top and bottom faces, in order to minimise the friction of the mainspring against the barrel’s interior, thus optimising energy transfer and eliminating metal wear.

Located at six o’clock is De Bethune’s spherical moon composed of two half-spheres – one in palladium and the other in heat yellowed steel. It is accurate to one day in 122 years, the standard in watchmaking.

Further down the line is the escape wheel in silicon, which at less than a third the density of steel, operates with almost no friction and requires little energy. Though Swiss research institute Centre Suisse d’Electronique et Microtechnique (CSEM) holds the patent for silicon hairsprings, making them exclusive to its backers, namely Rolex, Patek Philippe, Swatch Group and Ulysse Nardin, silicon escape wheels and levers are being used by a variety of brands, from Jaeger-LeCoultre to Zenith to Laurent Ferrier. 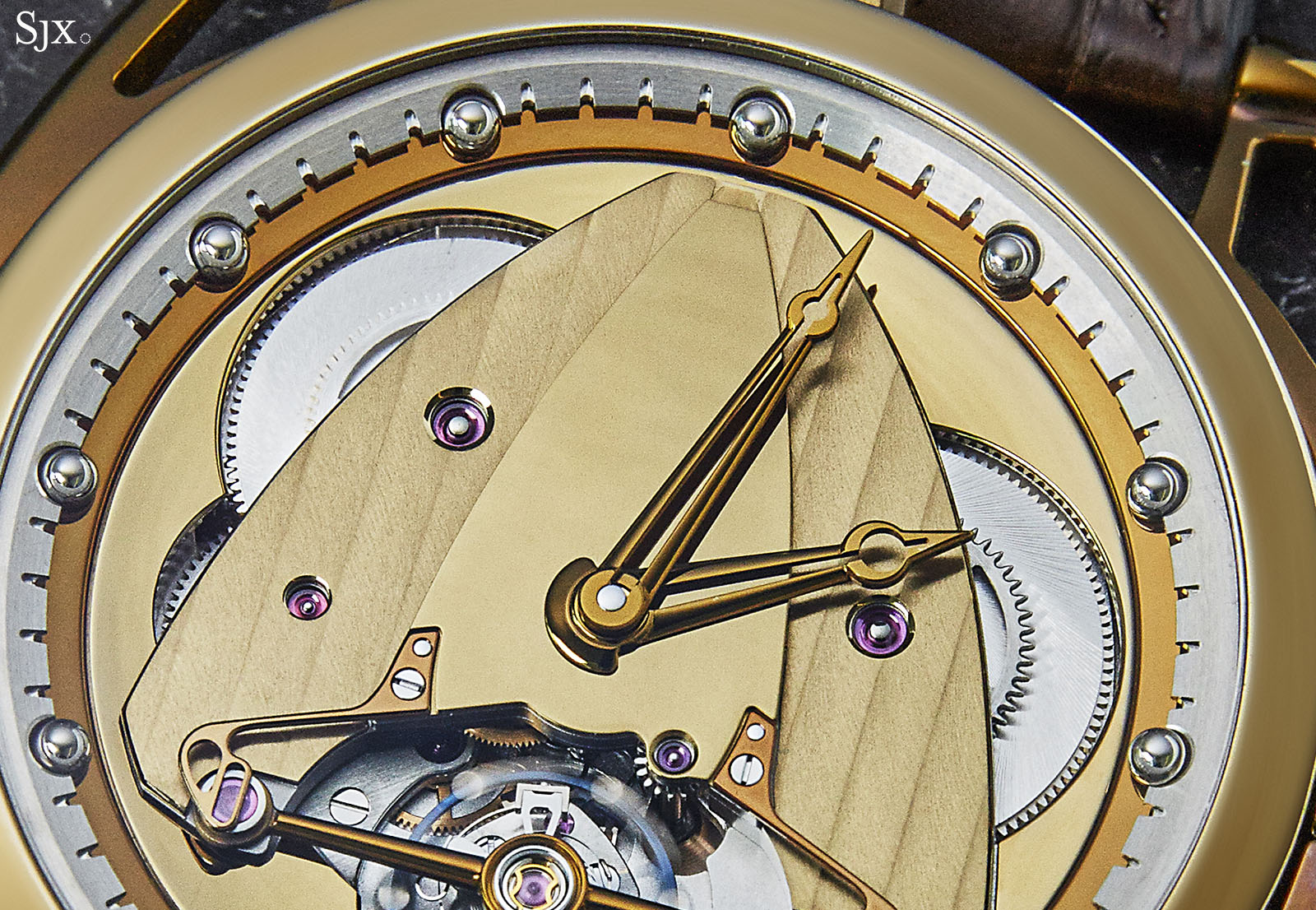 Notably, De Bethune was the first brand to introduce a silicon balance wheel in 2008. It was fitted with platinum weights on its circumference and is now just one of nine balance wheels developed by the brand since 2004.

But the balance wheel in the DB28 is far more conventional. It’s made of blued titanium with white gold regulating weights on its periphery to achieve the perfect mass-inertia ratio.

The balance is held in place by a beautifully polished, yellow titanium bridge fitted with the brand’s triple pare-chute shock absorbers. It is essentially an extra pair of outboard springs at both ends of the bridge, in addition to the standard Incabloc shock protection for the balance staff, hence the triple pare-chute moniker. 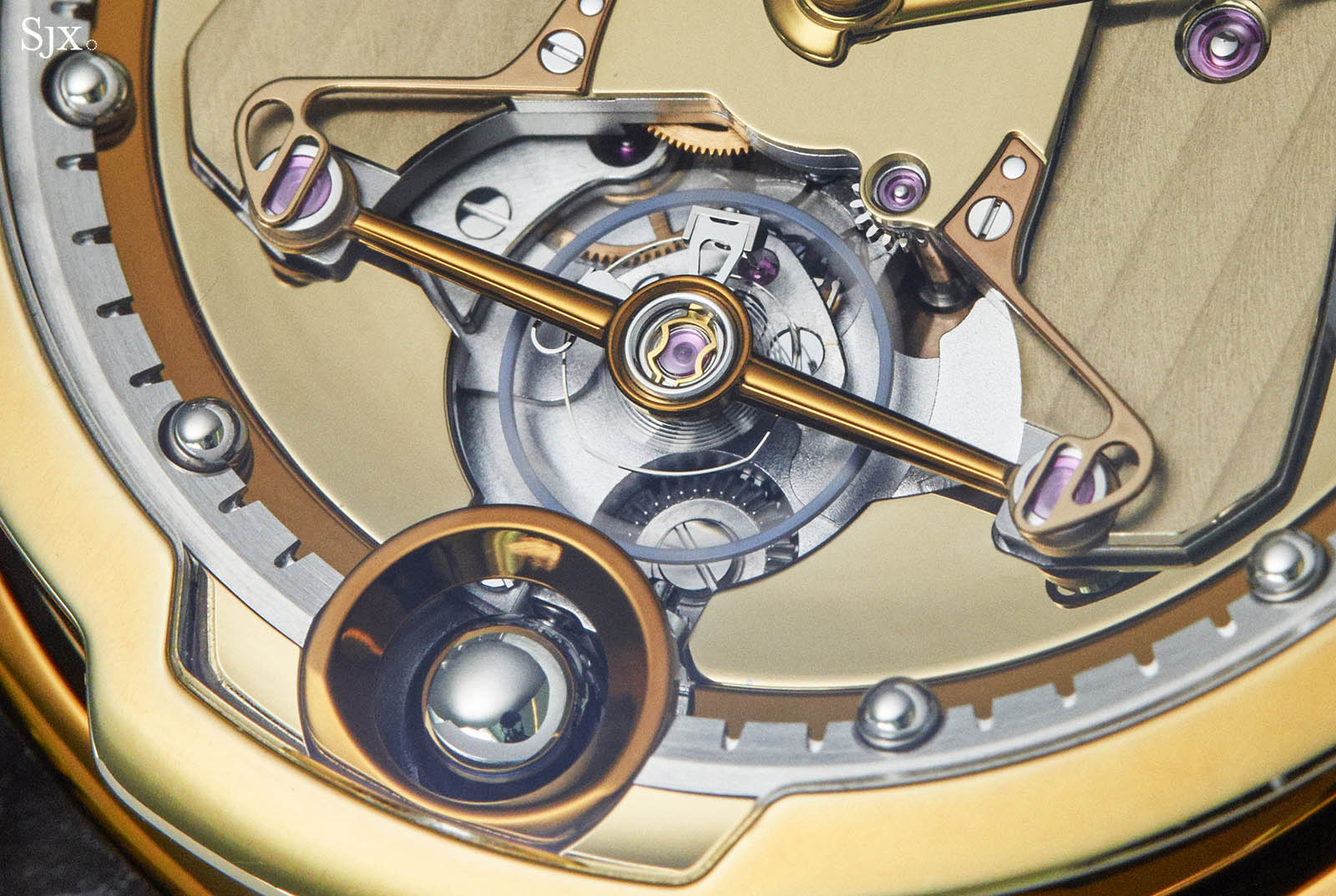 Though made from conventional Nivarox alloy, the hairspring is distinguished by a unique architecture that was designed in-house. In contrast to the Breguet overcoil, which is high and vulnerable to shocks, the De Bethune hairspring is flat with a wider terminal curve, which reduces its height while ensuring concentric beating.

Turn the watch over and there is less to see, because the movement has been inverted in a way, to reveal the interesting mechanics on the front. 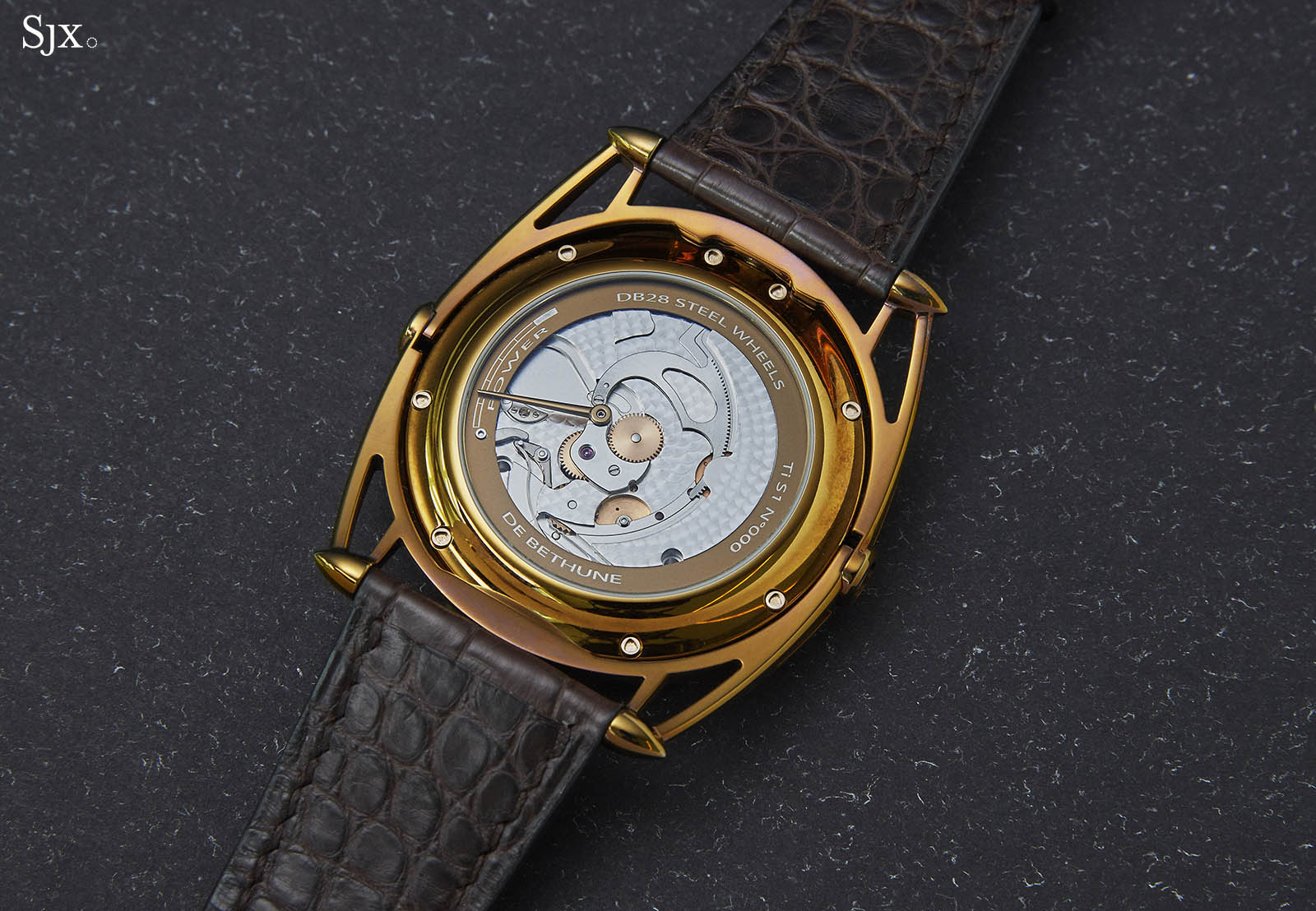 The watch pictured is a prototype and incorrectly marked “Steel Wheels” on the case back; the production version will read “Yellow Tones”

On the rear of the watch is only the power reserve, indicated by a golden pointer against a yellow titanium ring with a six-day scale. All of the power reserve mechanism is visible, including the large rack that drives the pointer. 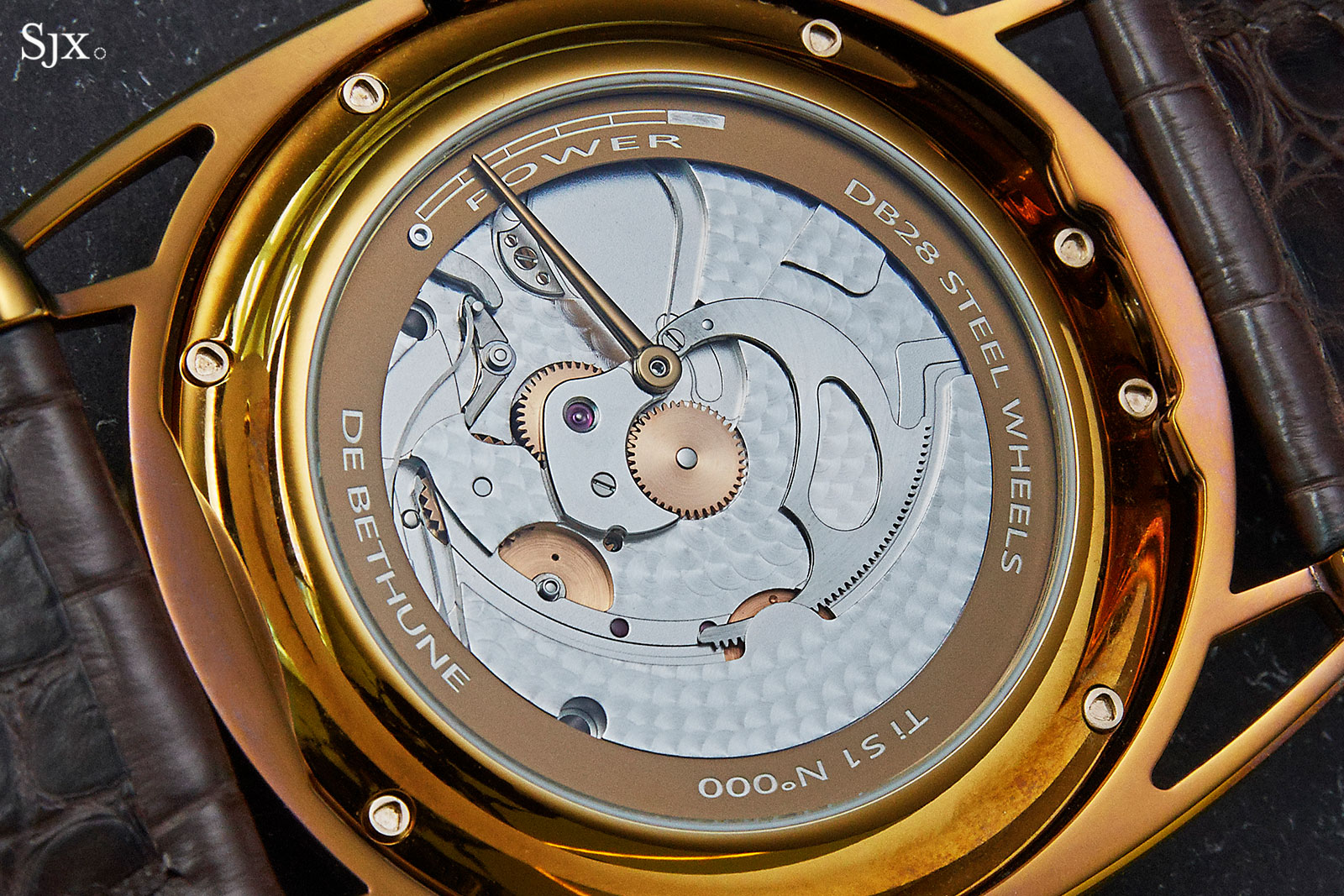 De Bethune watches are tremendously impressive both inside and out, and this one is no different. Moreover, its seductive, striking shade of yellow, while not as unique in watchmaking as blue, makes it one of the most unique De Bethune watches.

Correction October 31, 2019: A yellow oxide layer is achieved by heating titanium at a lower temperature than blue, and not higher as stated in an earlier version of the article.

Addition November 1, 2019: Included note that the watch pictured is a prototype with an incorrectly labelled case back.