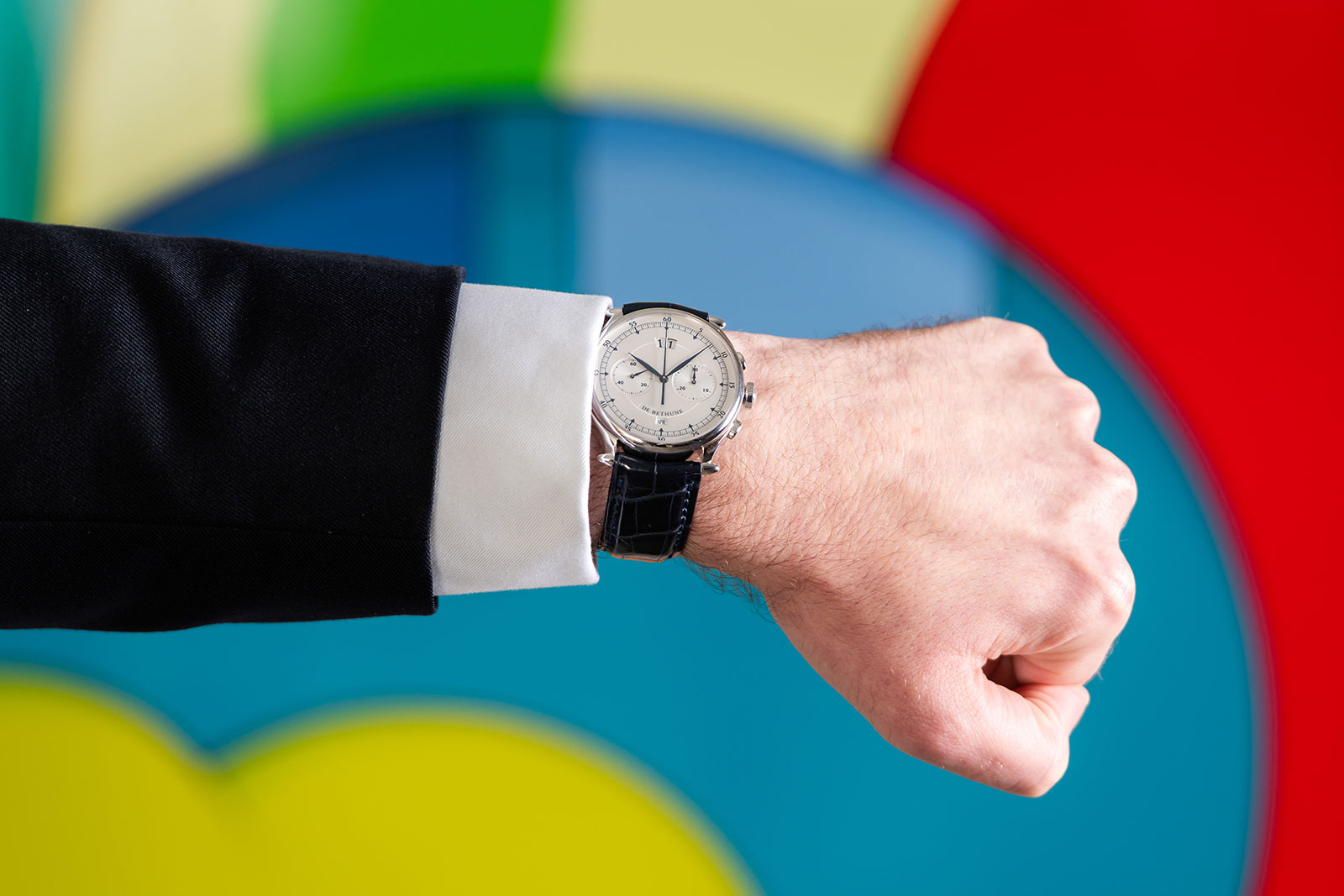 The week-long sale includes over 50 watches, ranging from the usual suspects like Royal Oak, Nautilus, and Submariner, but also a selection of more interesting, unconventional watches, like a De Bethune DB12 chronograph with oversized date and month, and an extra-thin, skeletonised Seiko Credor.

Here are a couple of highlights from the sale, which is online from now till 6 pm (GMT+8) on May 28. The entire catalogue is available here.

One of the earliest lots in the auction is a sculpture with a horological element. The Bronze Hourglass was an edition of 100 examples commissioned by watch retailer The Hour Glass to mark its 40th anniversary in 2019.

It’s the work of Daniel Arsham, one of today’s hottest contemporary artists. Mr Arsham is best known for his “eroded” works, objects made to appear heavily aged. Some of his work sits the crossroads between art and luxury goods – he’s applied his unique aesthetic to Rimowa luggage, Dior bags, and also a Porsche 911. A limited edition made to mark the 40th anniversary of Seiko’s Credor collection, the Signo Cherry Blossoms encapsulates the key specialties of mechanical watchmaking at Seiko’s Shizukuishi Watch Studio (as opposed to the Spring Drive movements made by the Micro Artist Studio in another facility).

The Signo Cherry Blossoms is powered by the cal. 6899A, an ultra-thin, hand-wound movement that is just 1.98 mm high, less than the height of a 500-yen coin. It’s been skeletonised and then engraved by hand with a Japanese-inspired motif rendered in great detail. 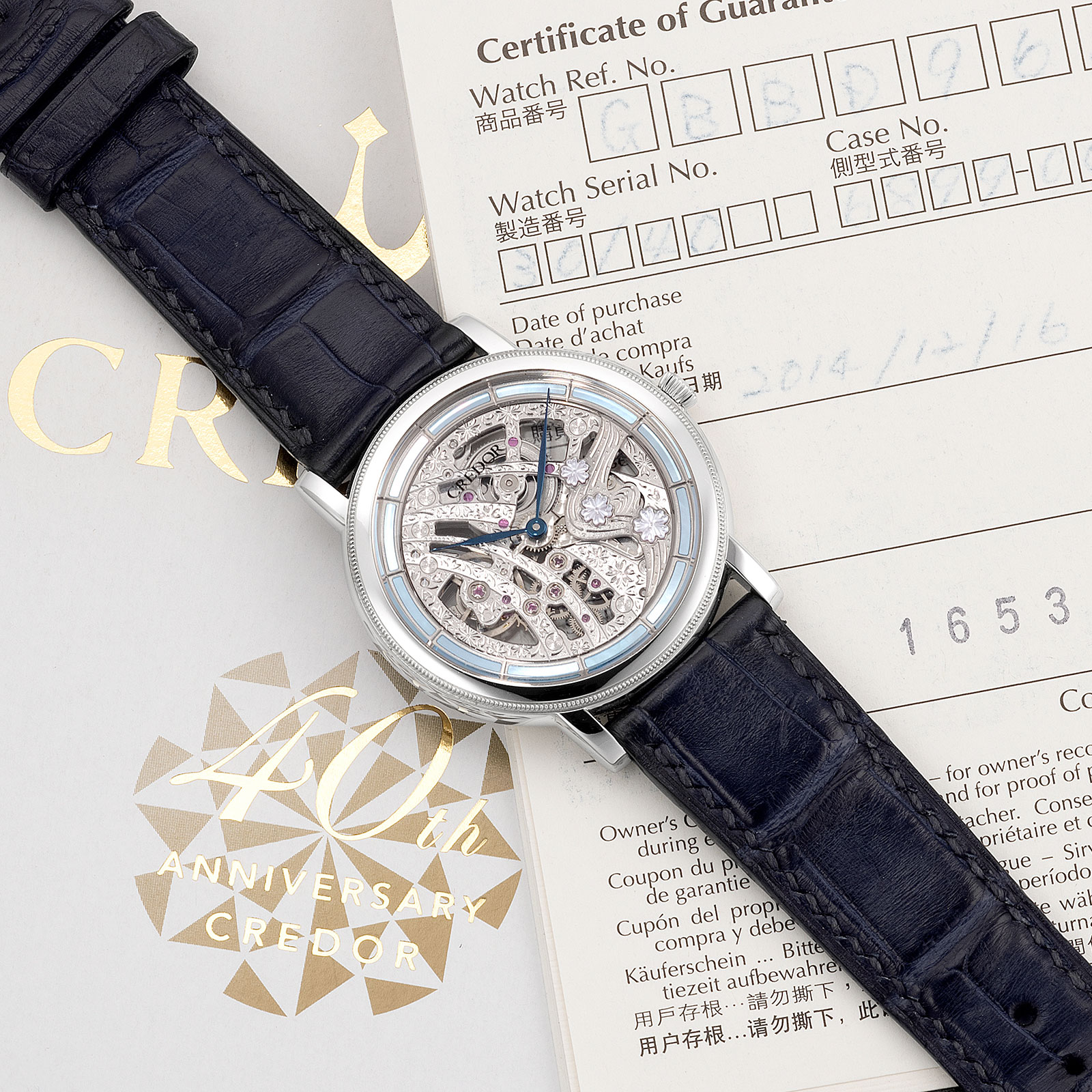 The base plate, which forms the dial of the watch, is engraved with a stream carrying floating cherry blossoms, each made of a tiny piece of mother of pearl inlaid on the plate. Continuing the theme, mother of pearl panels are inlaid onto the chapter ring around the dial.

The case is platinum and 35 mm in diameter, which is slightly small by contemporary standards but ideal for a formal dress watch. 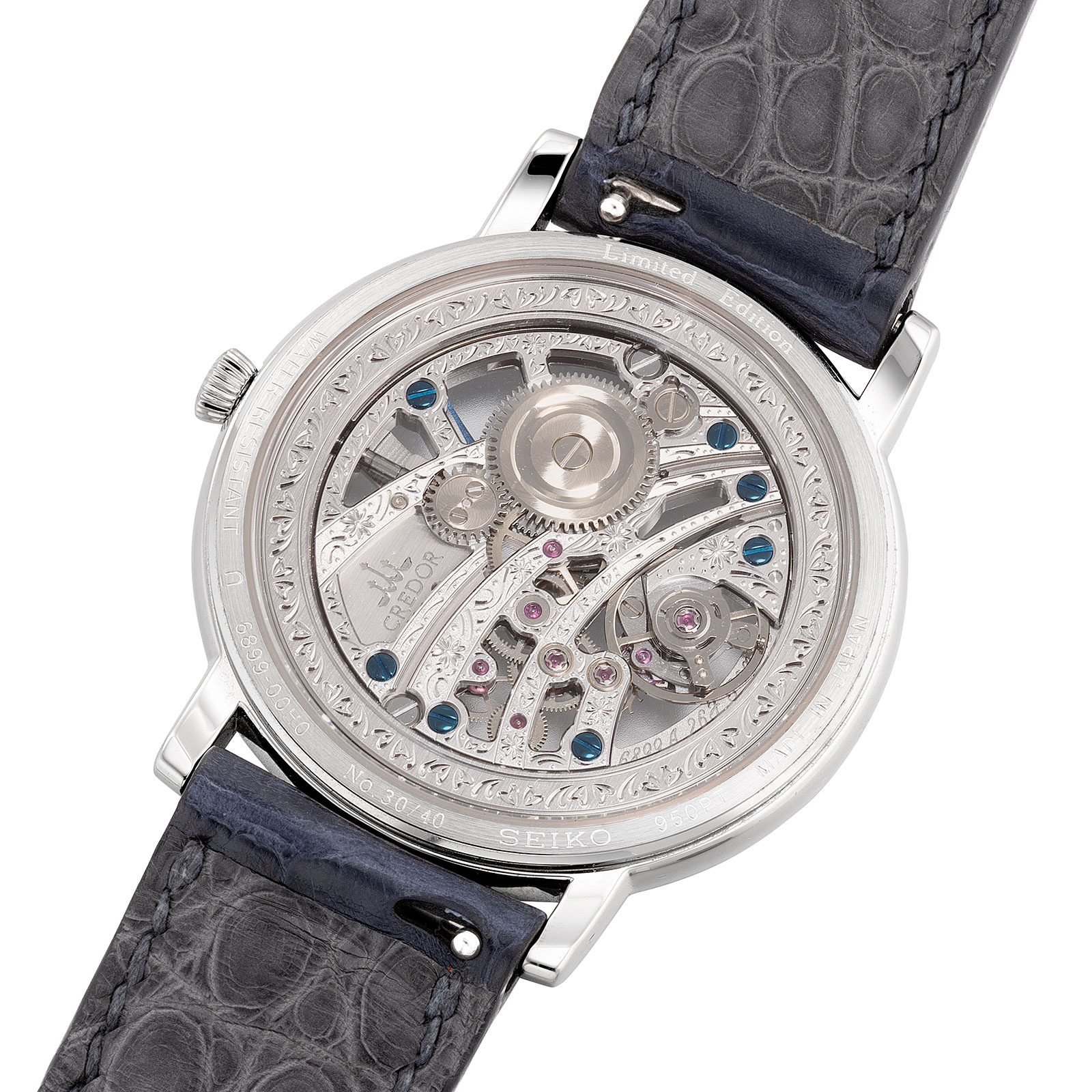 Though Jaquet Droz now offers a confusingly wide variety of Grande Seconde models, its earliest watches were mostly time-only but equipped with dials made of exotic and beautiful materials. Most were either stone or enamel (including the signature Paillonnee dials made by Anita Porchet), making this Grande Seconde fairly unusual.

Limited to eight pieces, this has a dial of cocobolo wood, a hard and heavy wood from Central America that has a pronounced, reddish-brown grain. 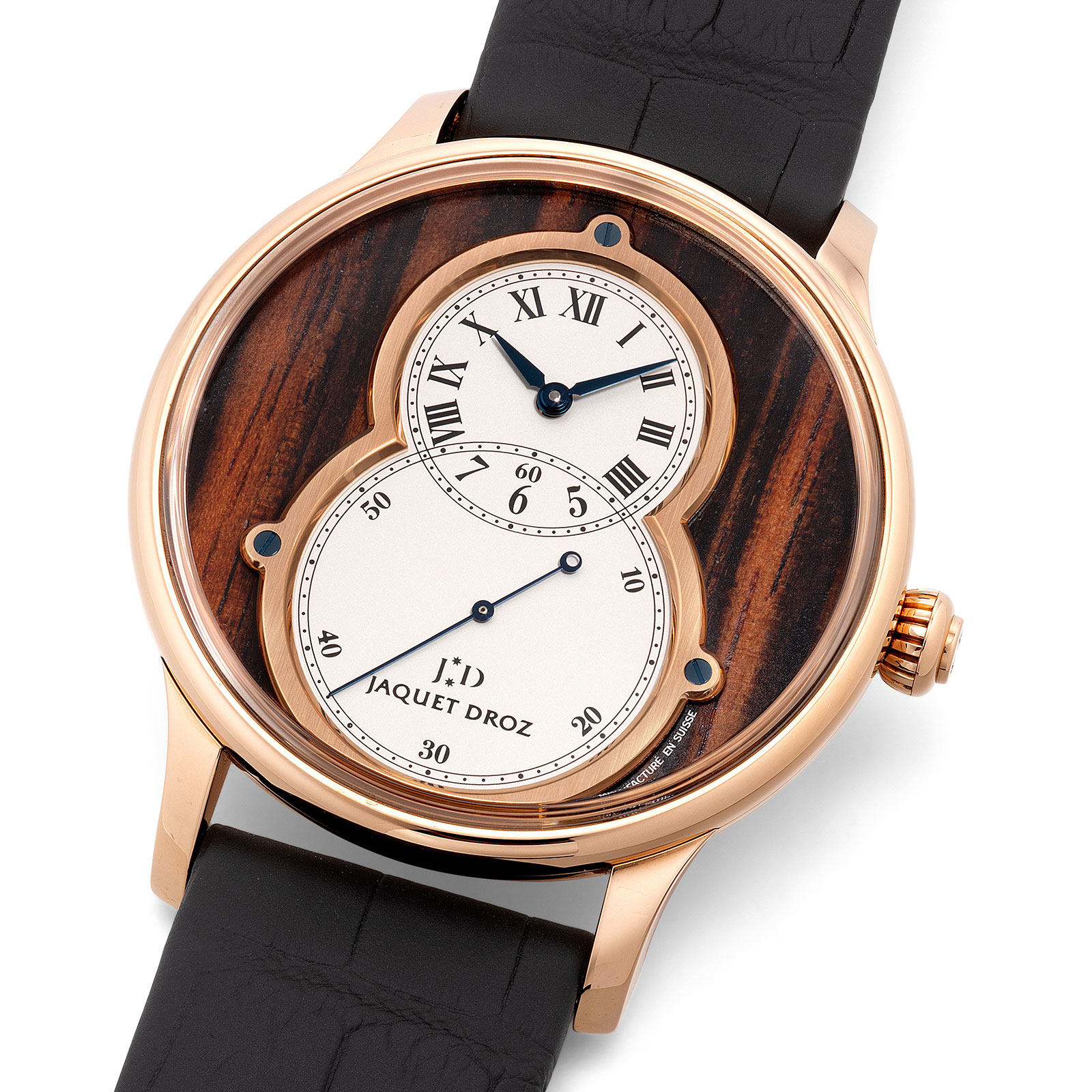 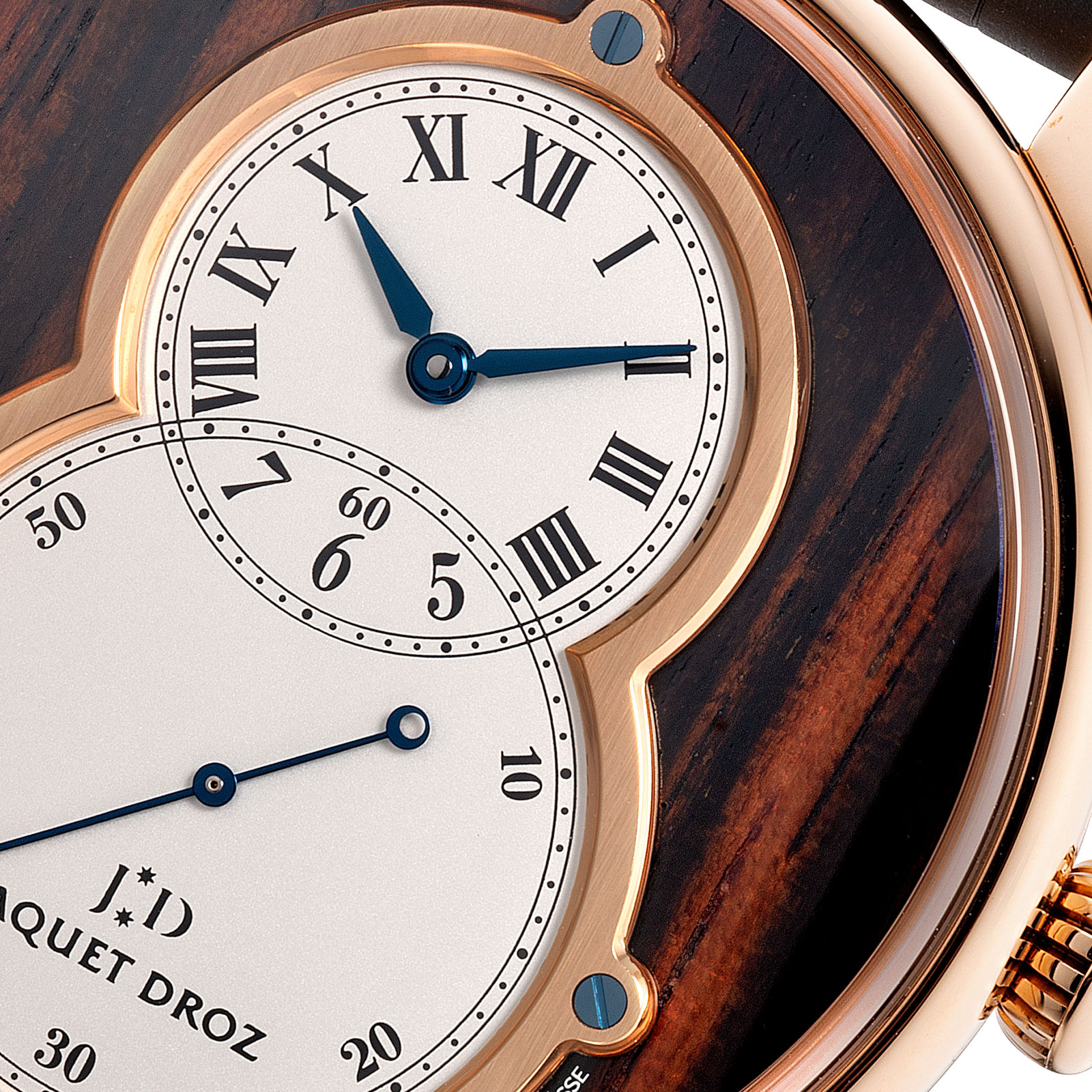 The case is the standard Jaquet Droz style, which is a large 43 mm but elegantly shaped, with bowl-shaped sides that given it a slimmer profile. And the movement is a Frederic Piguet calibre with an 22k white gold rotor. 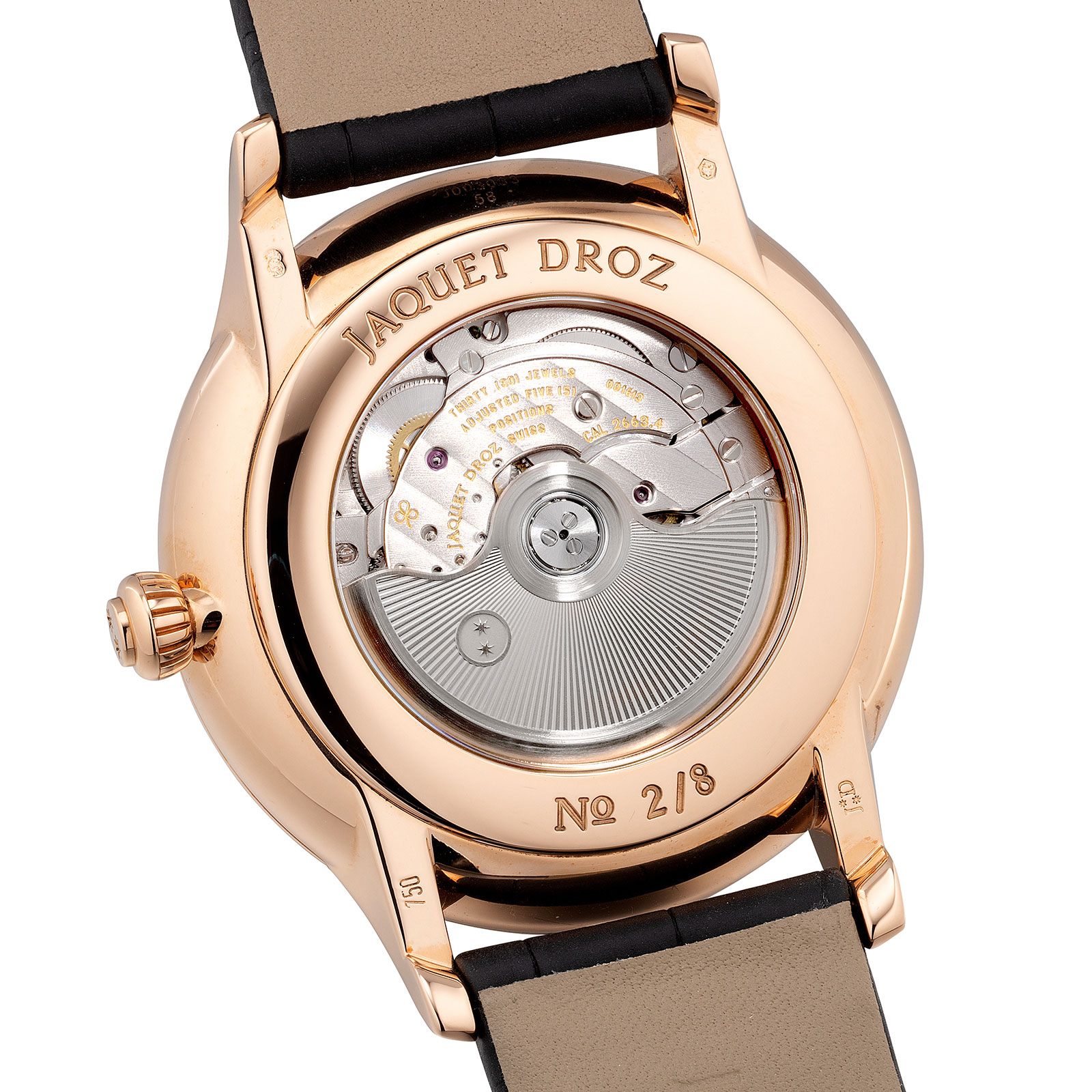 When Ikepod – maker of wristwatches designed by Marc Newson – was revived for the second time in 2008, its back was Adam Lindemann, a noted contemporary art collector and dealer. Consequently, Ikepod collaborated with Jeffs Koons in 2009 and then KAWS in 2012, who each designed a version of the Horizon wristwatch. 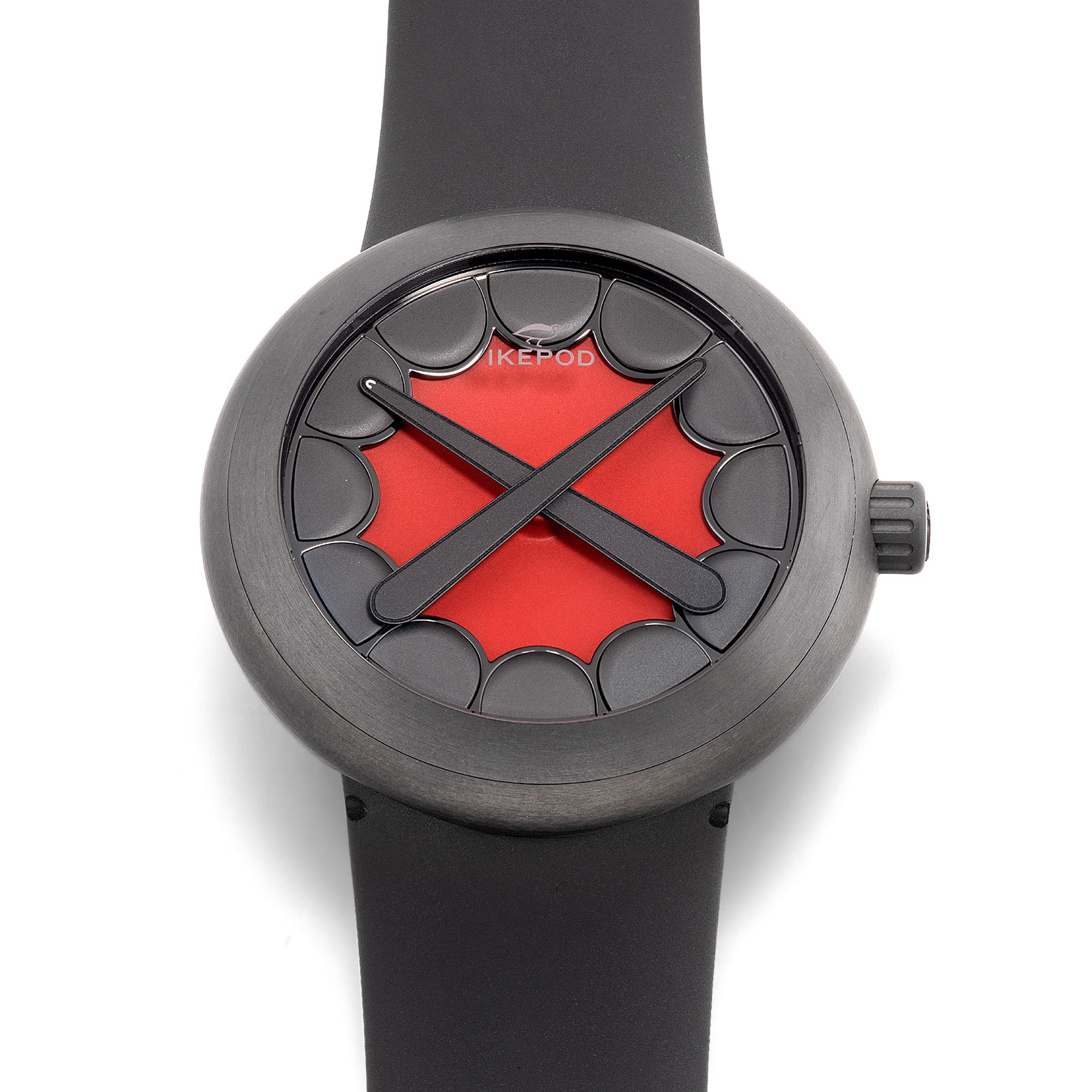 A sleek round case with no lugs, the Horizon is very much typical of Mr Newson’s industrial design aesthetic, which also shaped the look of the Apple Watch (and its distinctive strap that’s also found on the Horizon). Ordinarily fitted with a dimpled dial that gives it a resemblance to a golfball, the Horizon was reimagined by KAWS, who applied his signature elements of “circle teeth” and “x-ed out eyes” to the dial, giving it a style completely distinct from the other Horizon models. 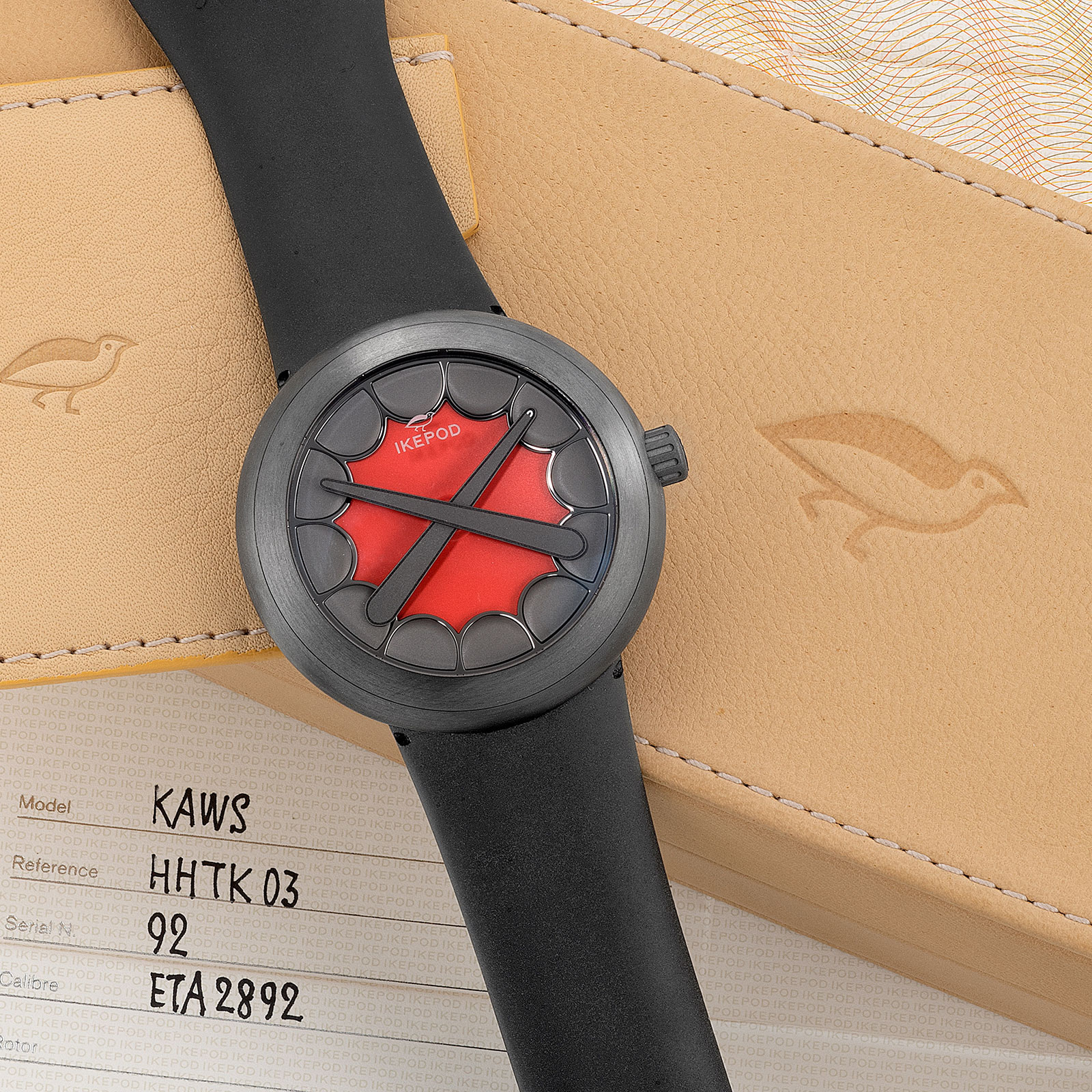 The case is brushed titanium with a black coating, while the movement is an ETA 2892 automatic. The Horizon KAWS is complete with box and papers, and carries an estimate of HK$100,000-150,000, or about US$12,800-19,200, which is a lot for an Ikepod but notably affordable for a KAWS given the record-setting run of his works at auctions in recent years.

When Zenith unveiled the El Primero in 1969, it presented the movement in two references equipped with the now-famous round case with pointed lugs, the better-known A386 in steel with tri-colour sub-dials, and the less common G381 in 18k yellow gold with a “panda” dial.

This example of the G381 is one of the earliest made – according to the archive extract it was delivered in April 1969, the same month as the Basel watch fair. 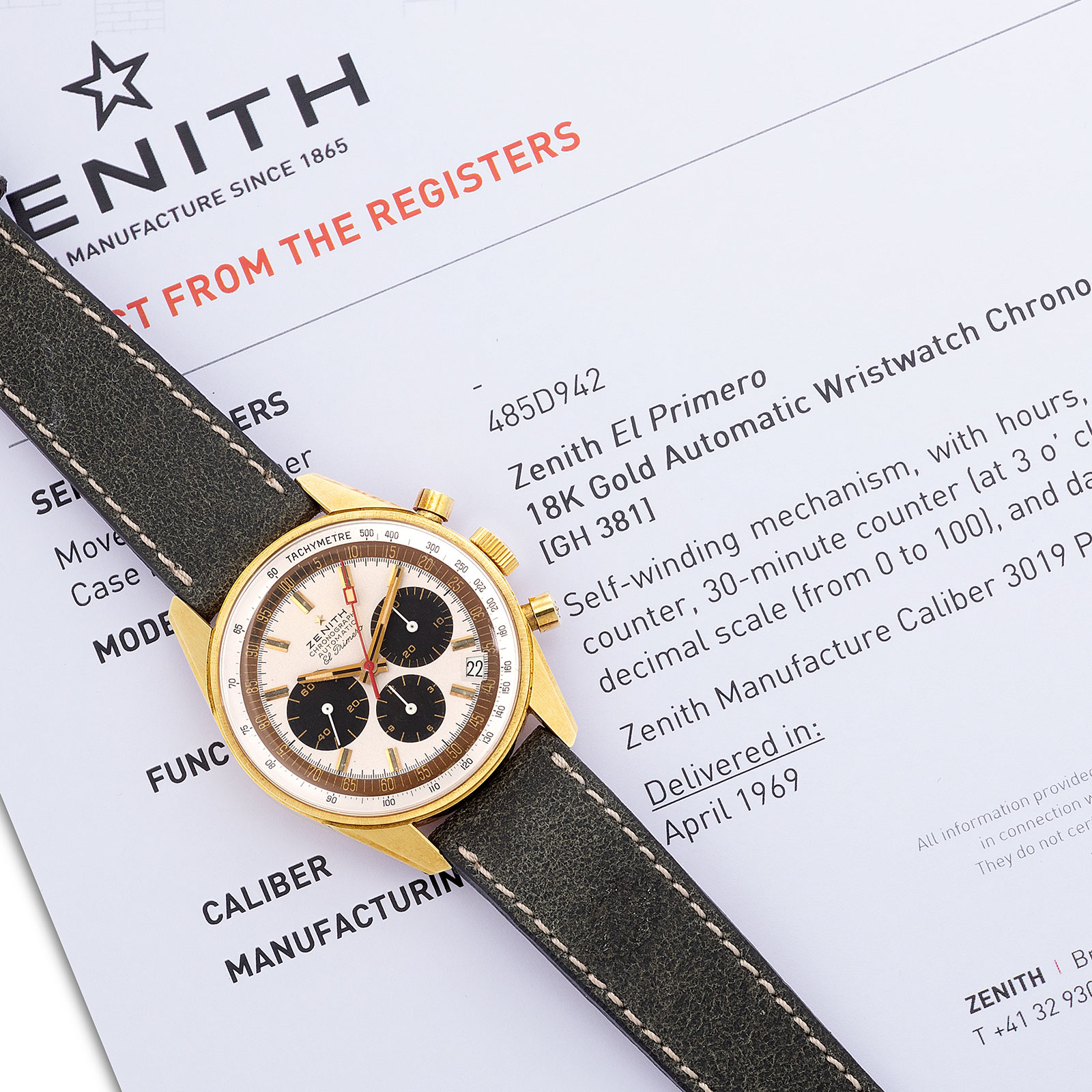 And the watch is in sharp condition, showing what appears to be the original surfaces and edges of the case – including the bevel on the outer edge of the lugs – as well as the deeply-stamped hallmarks on the back of the lugs. More unusually, this example has a “tropical” minute track that’s faded to a medium brown. 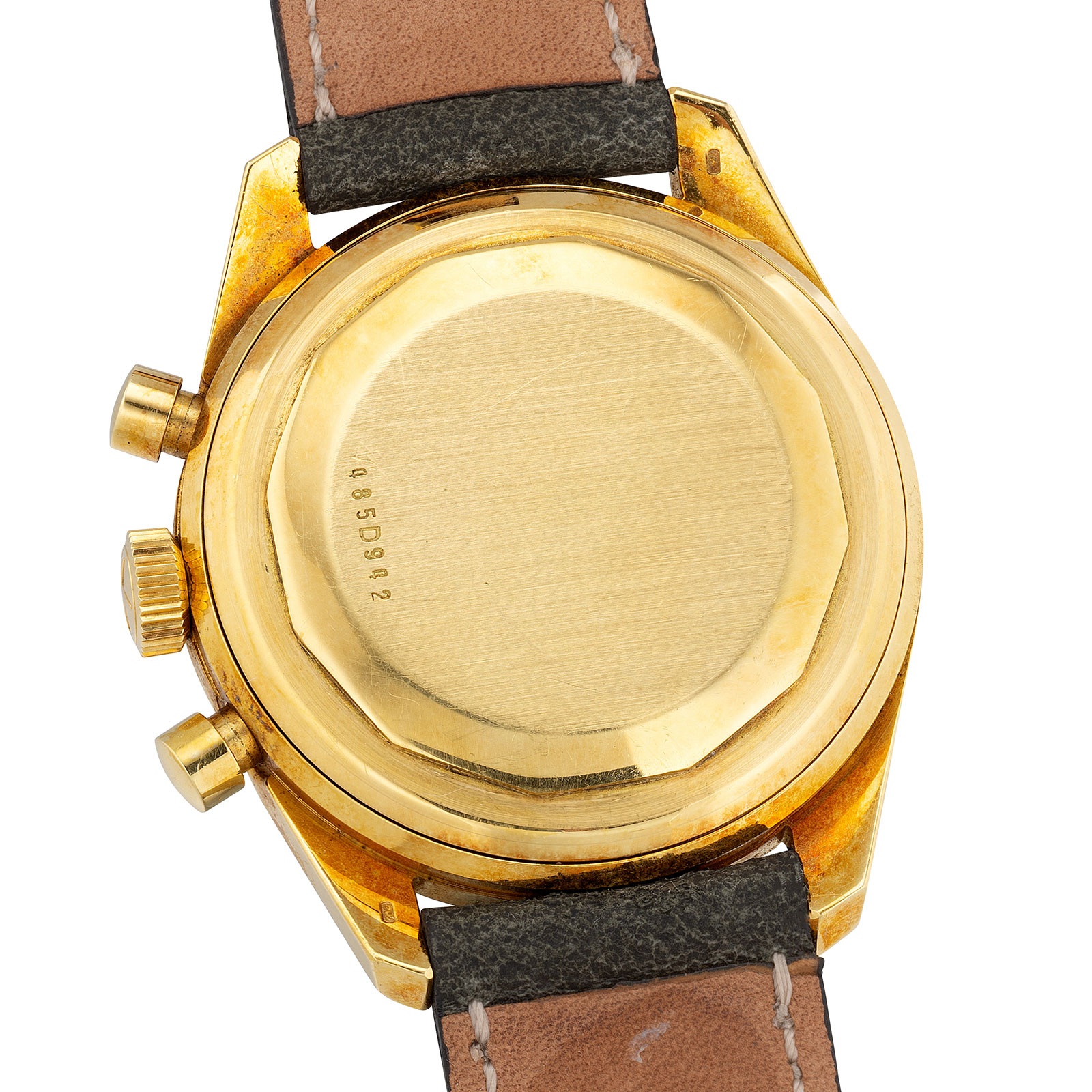 [Full disclosure: I own this watch and consigned it to Phillips in order to make way for a pair of similar El Primero watches that have personal significance for me, both of which may be featured here soon.]

Though now best known for its avant-garde watches, De Bethune made its debut in 2002 with classically-styled watches inspired by 19th century horology, such was the varied and fine taste of its cofounder, David Zanetta. This DB12 is one of those early watches, but with an unusual combination of complications – a chronograph along with an extra-large date and month. like many other De Bethune watches of the period, it is powered by a vintage movement, a Venus cal. 175. Dating from the 1960s, the Venus 175 was modified to feature the big date, as well as decorated extensively, resulting in the attractive view through the display back. 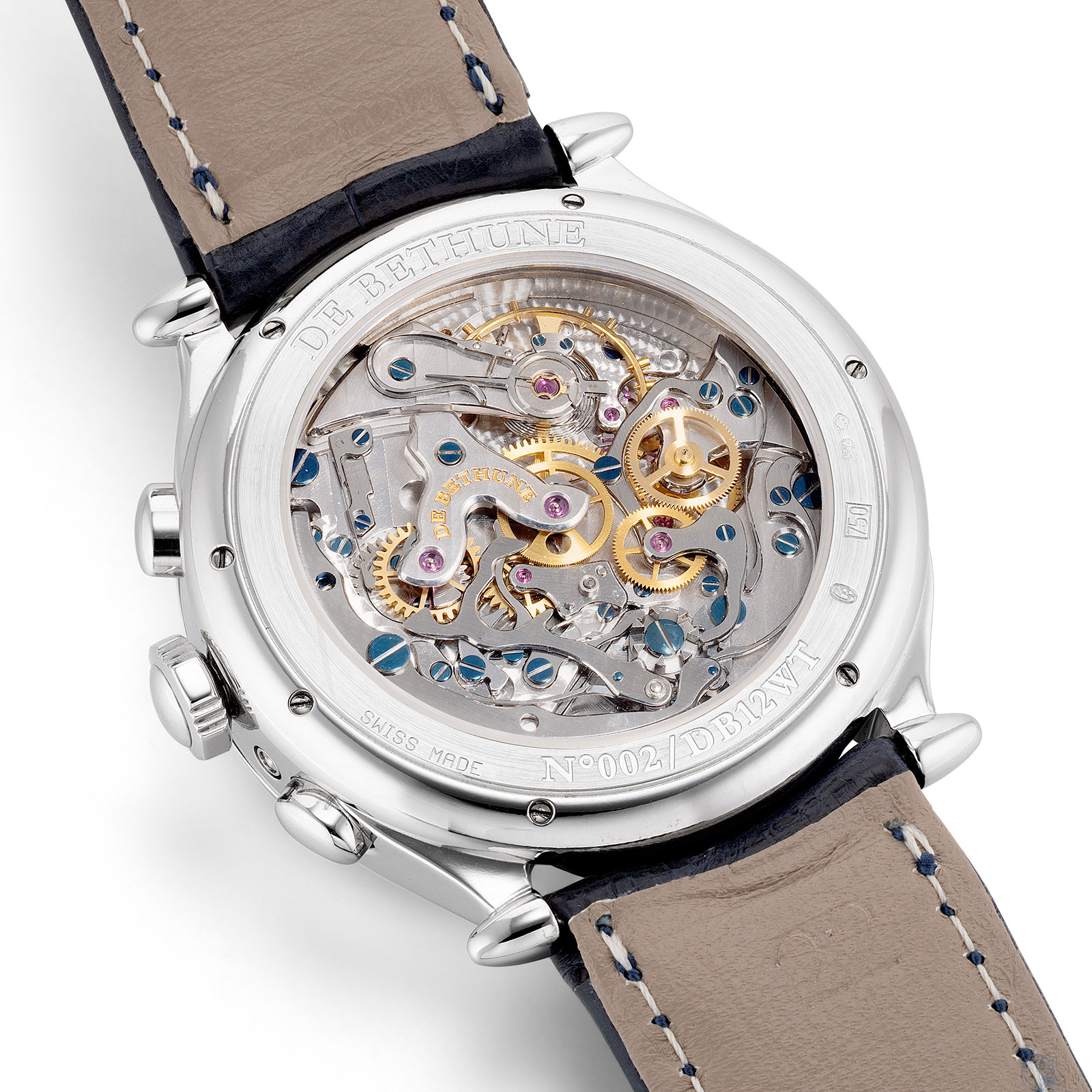 The white gold case is 42 mm in diameter, with short lugs tipped with a cone that have become the brand’s trademark.

Launched only last year, the Air Command limited edition was a well-received  remake of a rare, 1950s Blancpain pilot’s chronograph. 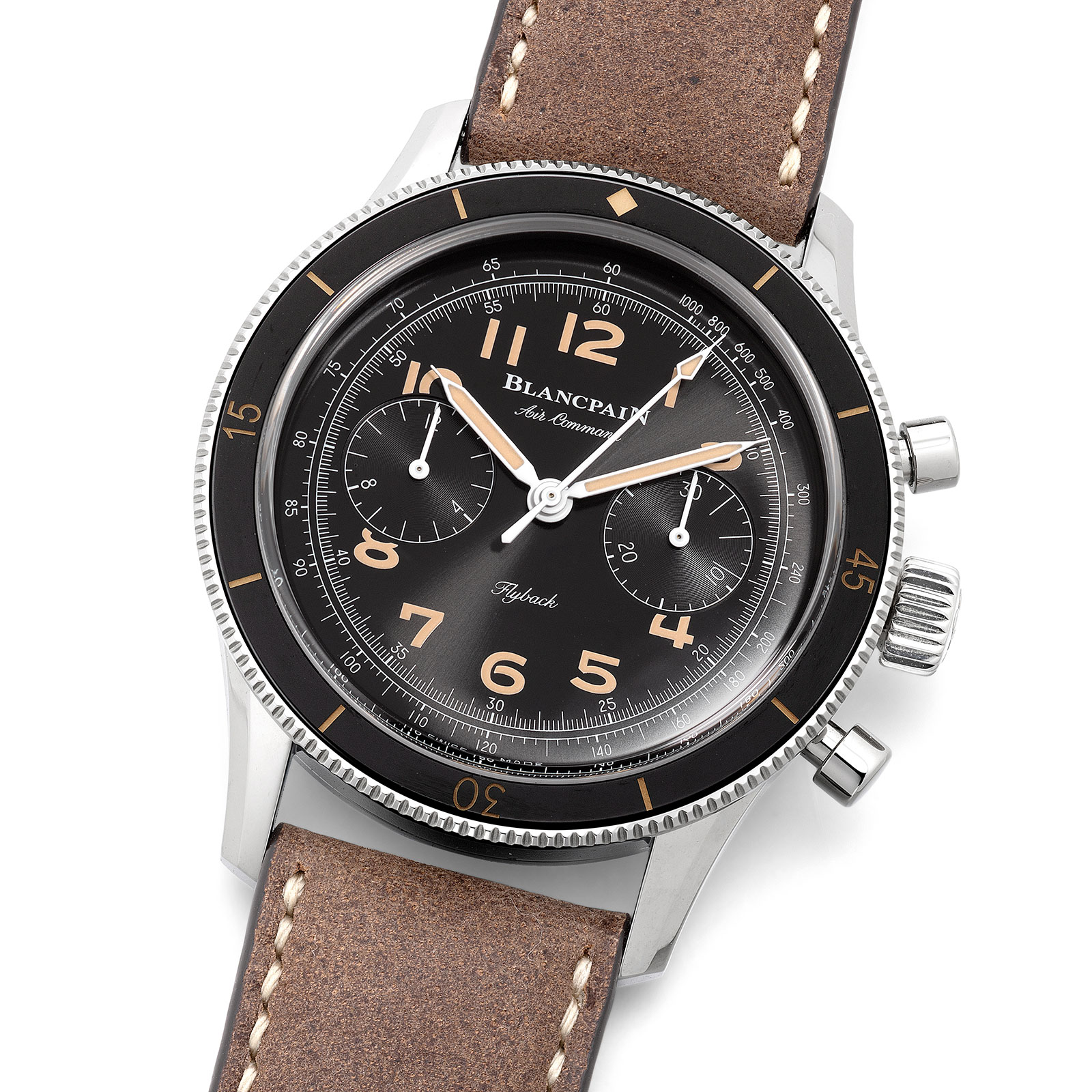 More importantly, the movement inside is the accomplished cal. F388B movement. It’s a notably large, 31.8 mm movement with all the features of a modern, high-end chronograph, namely a column wheel and vertical clutch. The version of the movement in the Air Command is fitted with a propellor-shaped rotor made of 18k white and pink gold.

Nerds will appreciate it is also equipped with a free-sprung balance wheel made of titanium with gold regulating weights, which oscillates at high frequency – 5 Hz, or 36,000 beats per hour. Breitling just unveiled the remake of the AVI ref. 765 three months ago – this is a vintage original. Introduced in 1953, the AVI was a pilot’s chronograph with a style typical for the era, but oversized at 41 mm in diameter, making it a largish watch even by today’s standards. Like many Breitling chronographs of the period, including the more famous Navitimer, the AVI was powered by the Venus cal. 178, a hand-wound movement. From the photos, the watch looks like a well-preserved example that shows consistent wear and tear. The radium on the dial has aged to a dark brown, while the black lacquer filling of the bezel engraving has worn off.