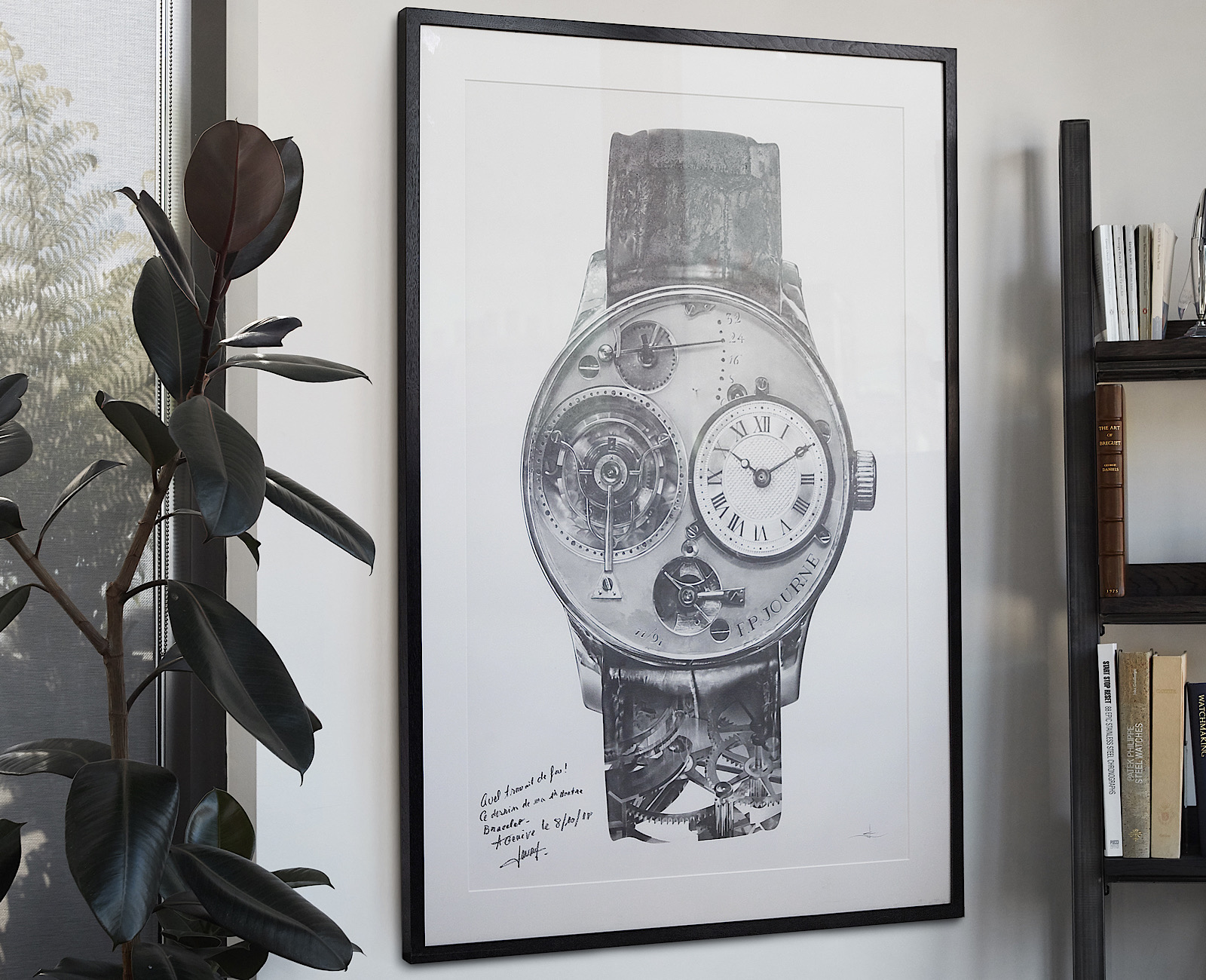 From today till the end of this week, London-based A Collected Man will be running an online auction for a pencil illustration of F.P. Journe’s first wristwatch – the very first tourbillon remontoir d’egalite.

The work of Julie Kraulis, a Canadian artist who specialises in watch portraits, the auction’s proceeds will go to COVID-Zero, a research initiative that aims to develop a vaccine for the novel coronavirus.

Well known in the online watch-collecting community for her highly-detailed drawings, Ms Kraulis ably captured the first-ever wristwatch created by Francois-Paul Journe in 1991, essentially a prototype of his tourbillon and constant force mechanism. Ms Kraulis also added a little bonus within the watch strap – a magnified view of the the patented remontoir mechanism. 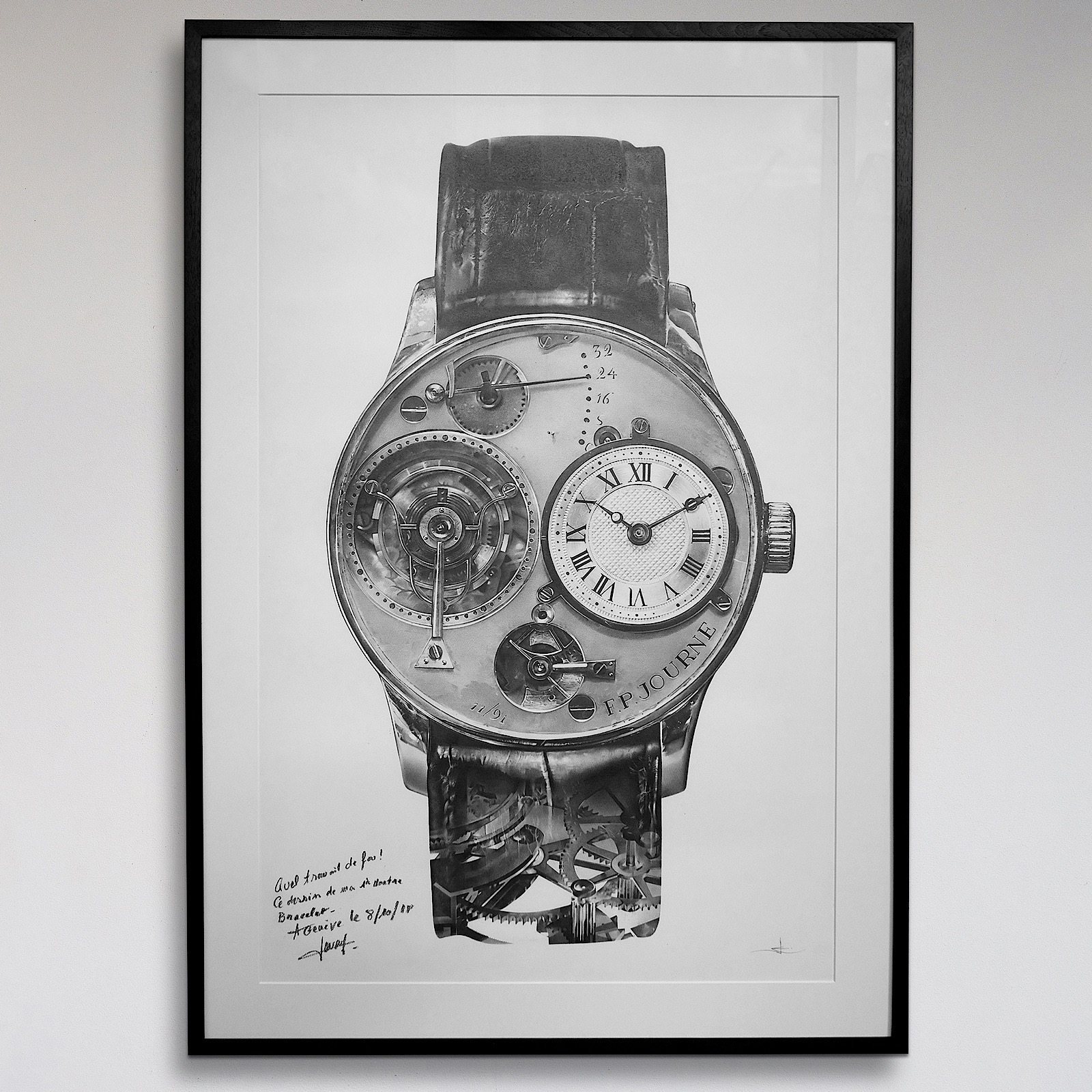 Drawn with graphite pencils, the drawing required an incredibly meticulous process of some 300 hours to complete. Measuring about 65 cm by 100 cm, the finished work is a testament to Ms Kraulis’ skill. 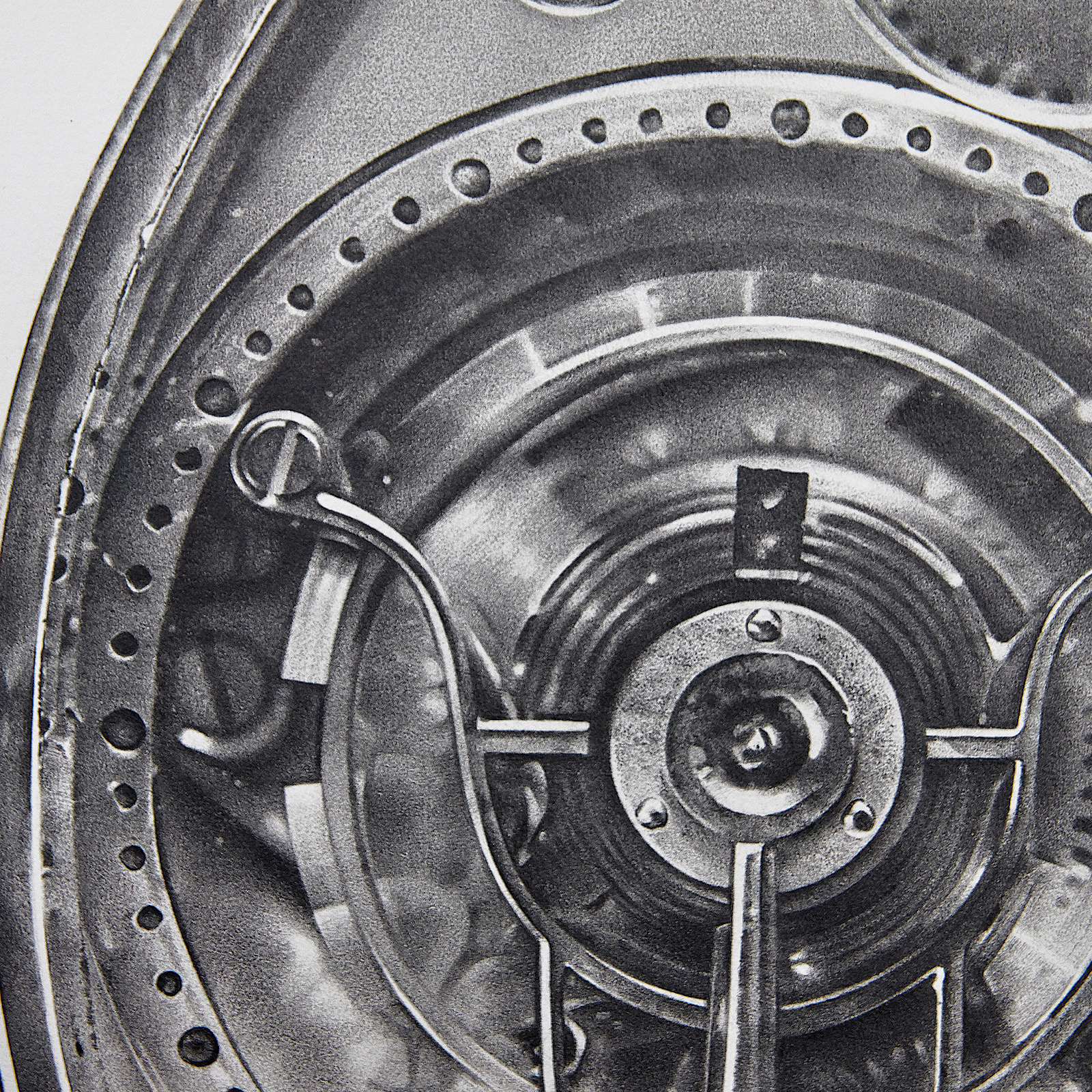 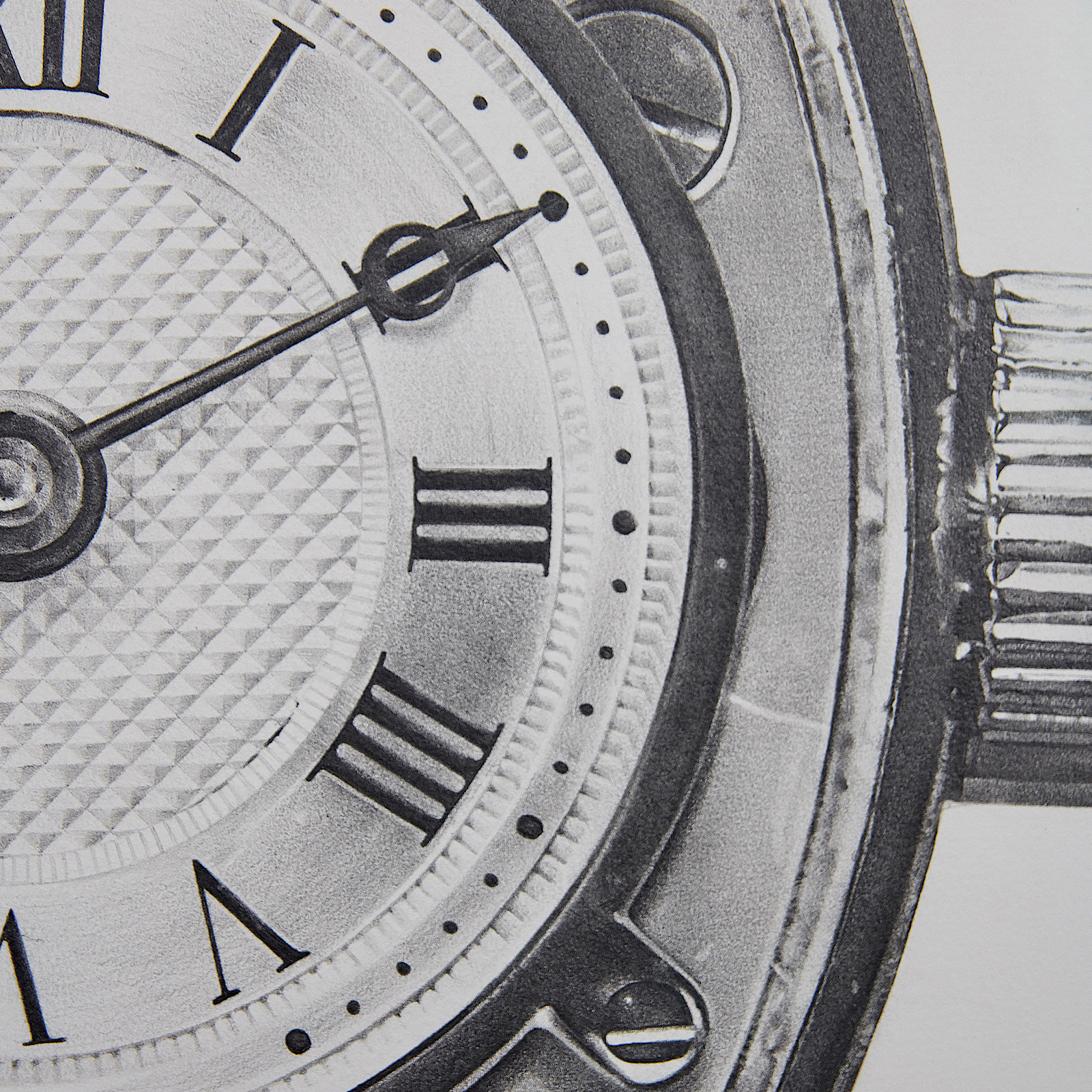 The sale of this illustration is done with the blessing of Mr Journe, who inscribed a message at the bottom of the canvas in late 2018. 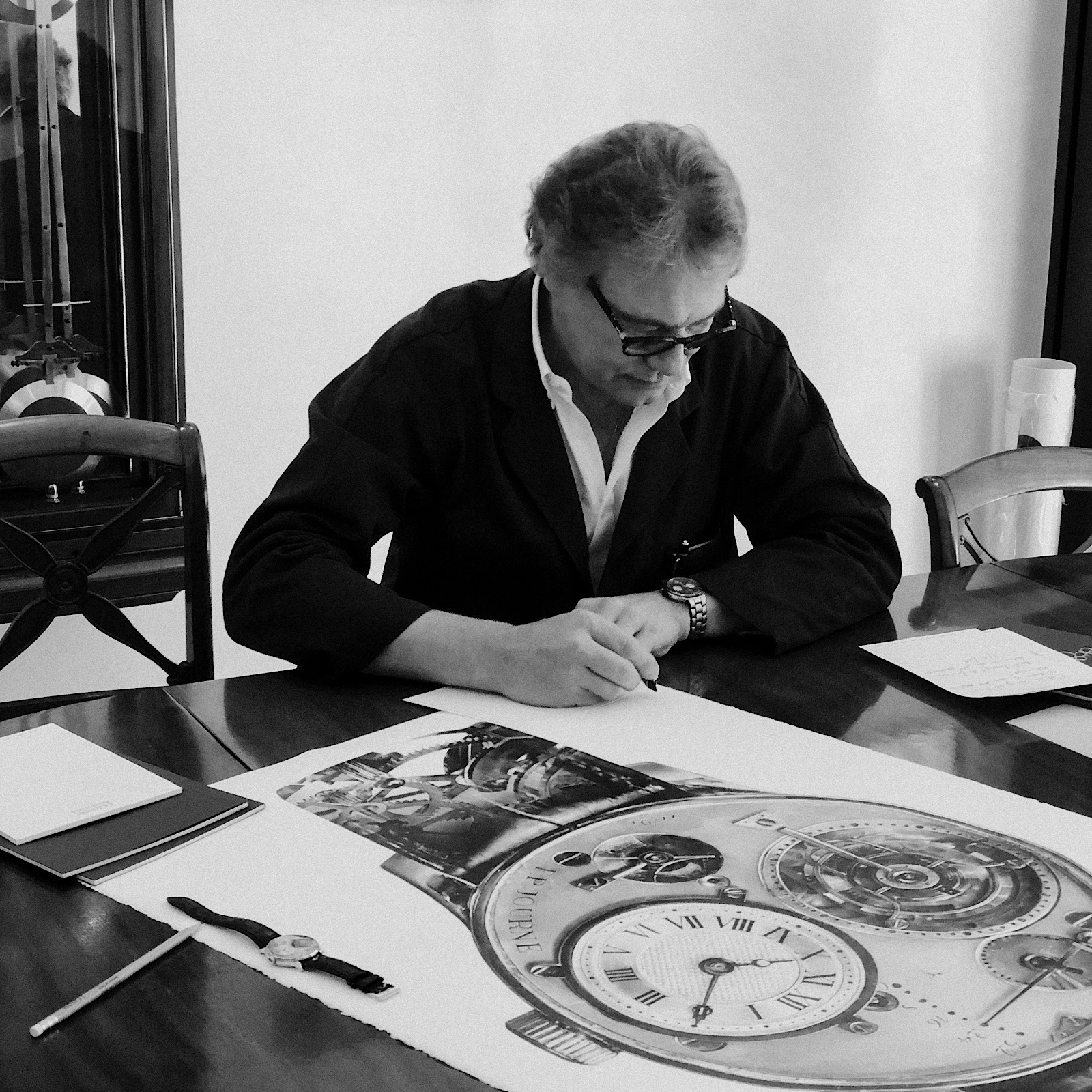 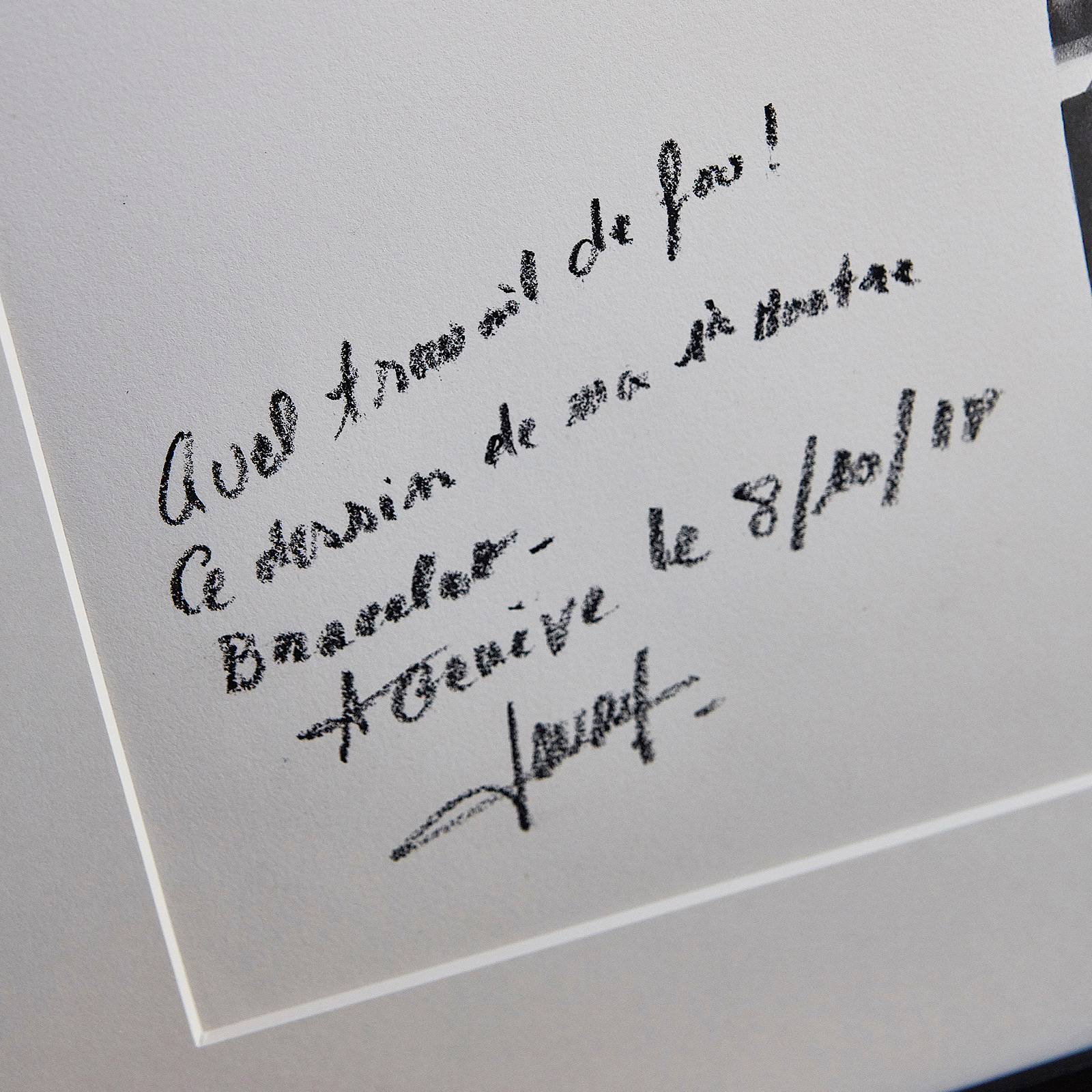 To mark its 45th Anniversary, Ace Jewelers has once again turned to Nomos, resulting in the Tangente 38 Amsterdam Edition. It’s the third watch in the retailer’s Amsterdam series of limited editions, but the first based on Nomos’ signature Tangente, which was given a few Amsterdam-inspired tweaks in tribute to the retailer’s hometown.

Like Ace Jewelers’ earlier Nomos editions – the Club Campus Amsterdam and Zürich Weltzeit Amsterdam – the new Tangente features an attractive black, white and red colour scheme based on the Dutch capital’s coat of arms. The splash of red inject a playful character to what is ordinarily a monochromatic watch.

All the Amsterdam-specific details add up for a coherent and handsome design, even as a stand-alone Tangente independent of its inspiration. And it costs exactly the same as standard edition, making it a no-brainer if you like the stark colours. 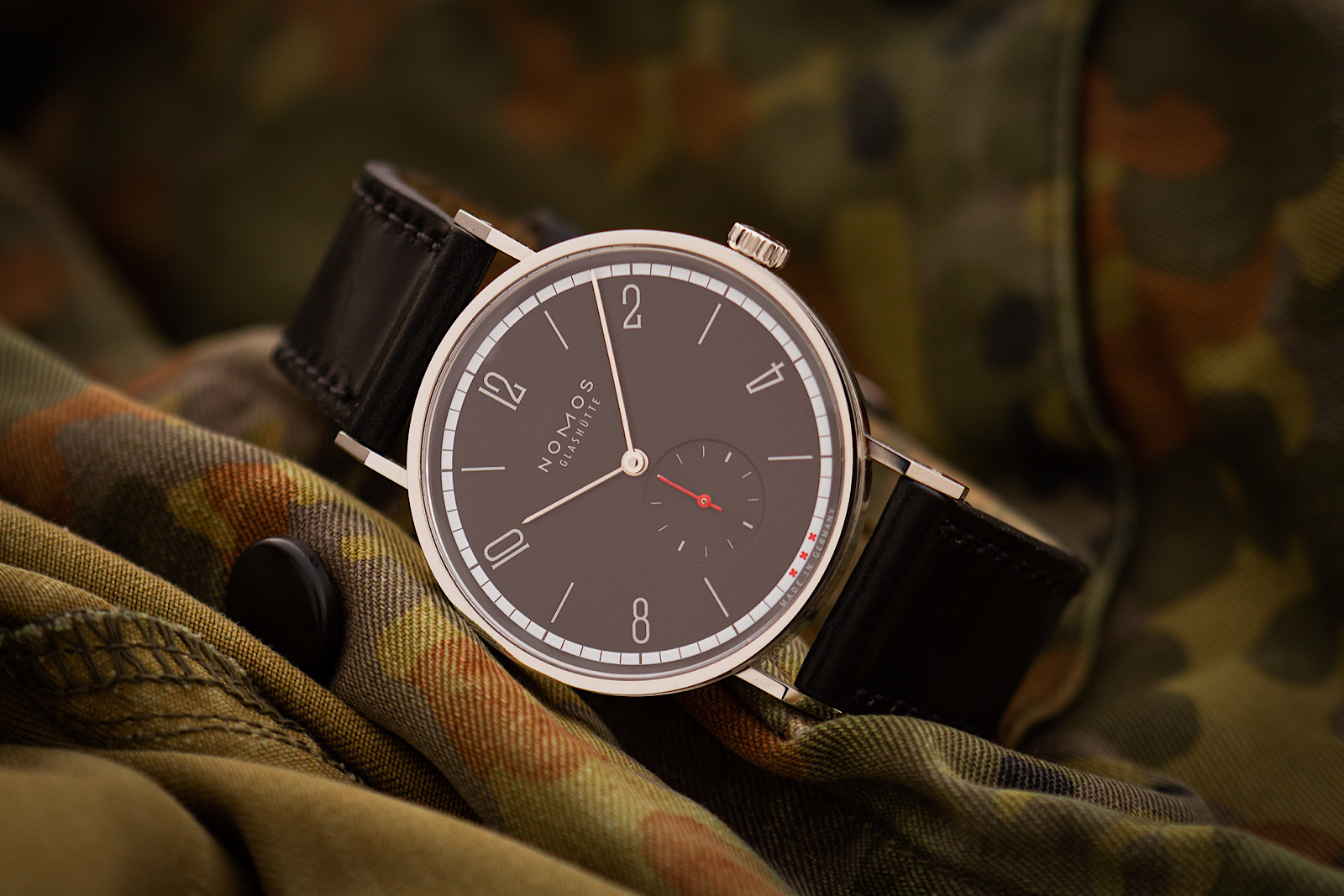 The strong use of black, white and red is nod to the Amsterdam coat of arms. Though the dial is high contrast, the reference to the Dutch city is subtle. 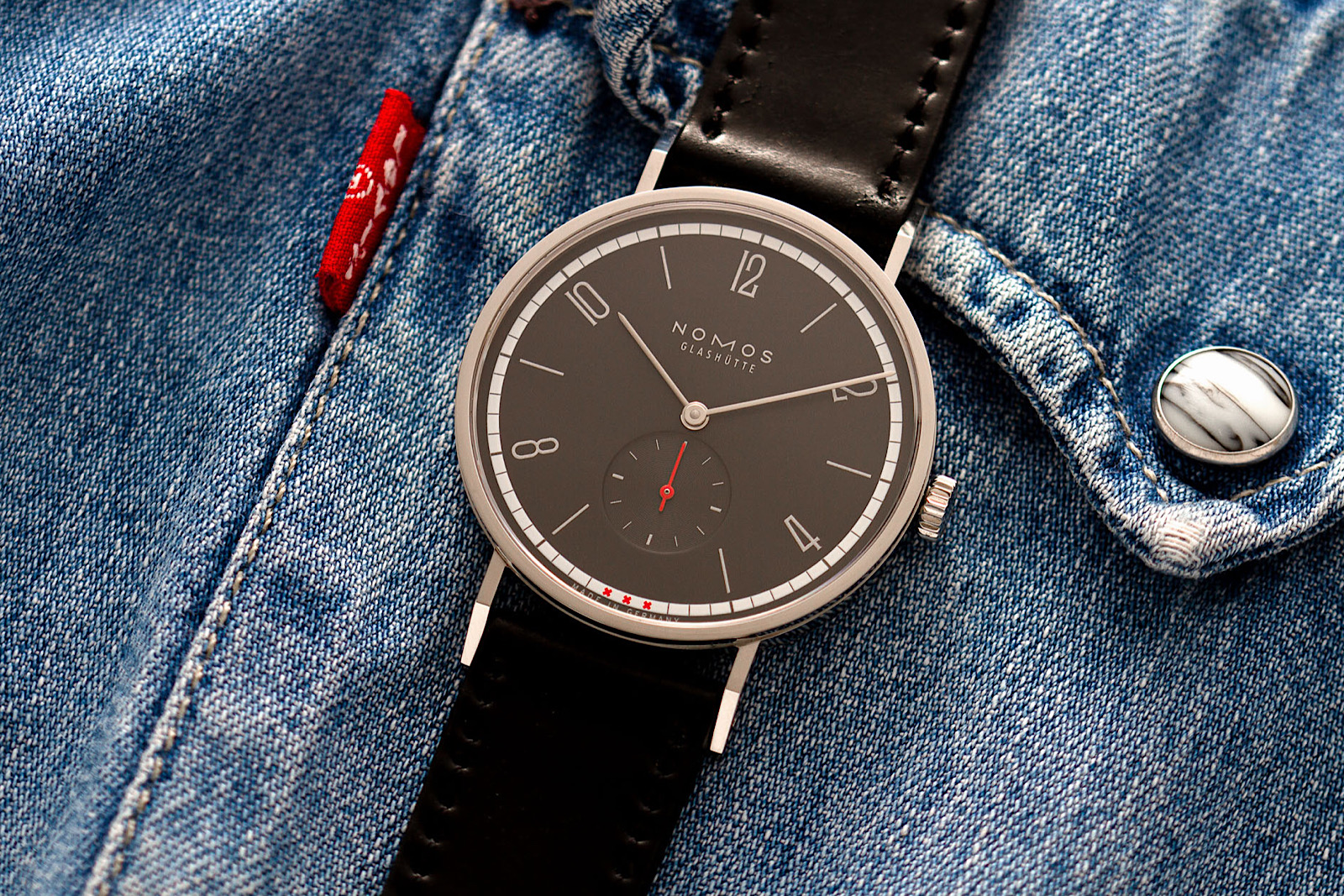 Apart from the dial, everything else that is endearing about the Tangente remains unchanged. The watch retains the distinctive Deutscher Werkbund-inspired design with clean, straight lines. Easy to wear with a 37.5 mm diameter and lugs that angle downwards, the Tangente wears flat thanks to its height of 6.8 mm.

The slimness is thanks to the reliable Alpha movement, which was Nomos’s first in-house caliber, though based on the architecture of the tried-and-tested Peseux 7001. It’s still widely employed across the Nomos range today, and most often found in the entry-level models, which also explains the affordability of the Amsterdam edition. 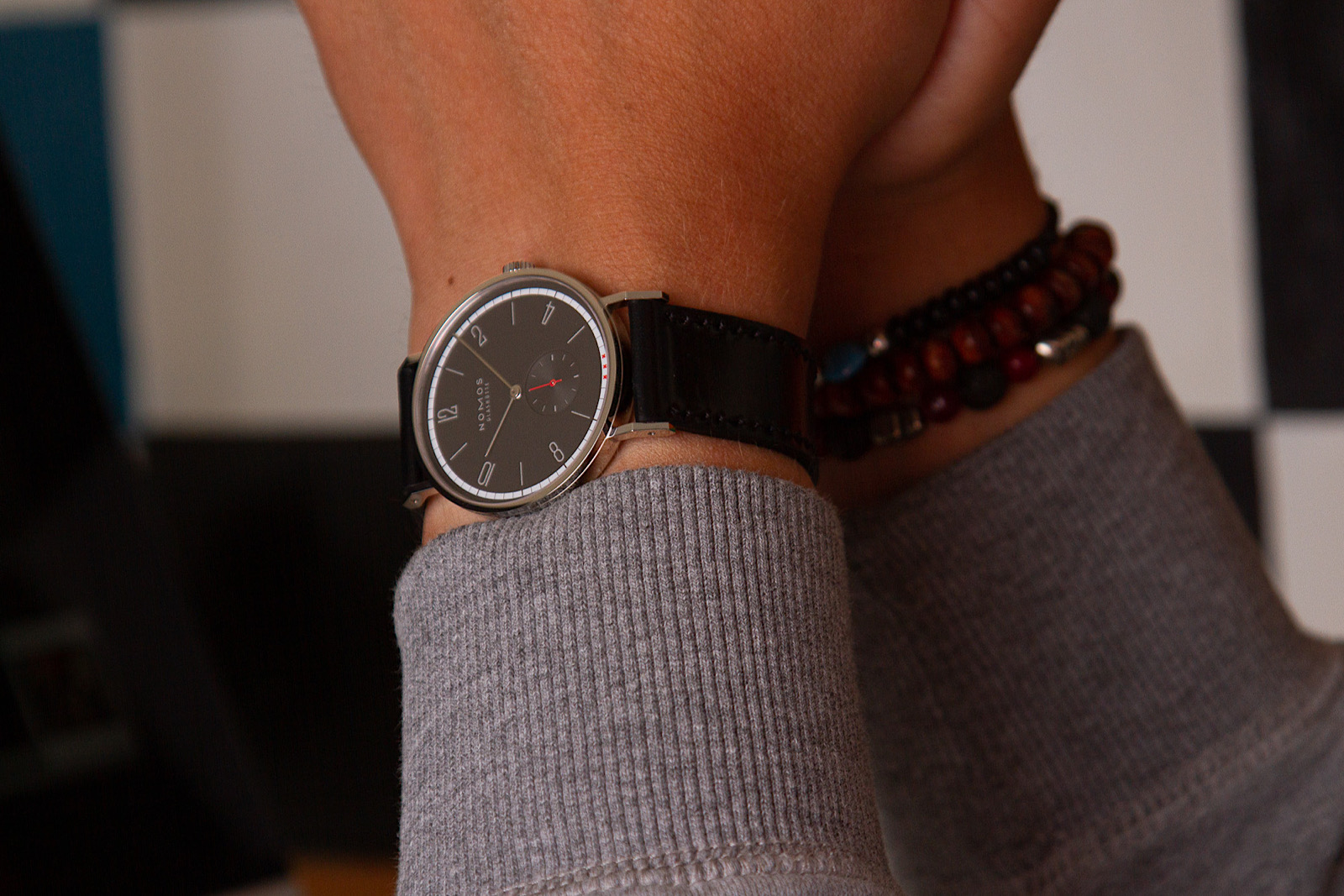 Correction May 25, 2020: The Amsterdam edition costs the same as the standard edition, and not more as stated in an earlier version of the article.

The world time in black and red.

While the vast majority of watch content on Instagram is predictable and repetitive – hello Nautilus with baguette gemstone bezel and Submariner “Hulk” –  there are a couple of collectors with interesting watches who share their collections on the picture-sharing app.

The most interesting for me are the independent-watchmaking enthusiasts. Most own watches that well known and regarded as landmarks in the genre – Philippe Dufour Simplicity, F.P. Journe tourbillon, Akrivia Chronometre Contemporain, and the like – but many also have watches further off the beaten track, like Keaton Myrick’s 1 in 30 or the Bexei grande sonnerie.

Here are a few independent-watchmaking collectors who are worth a follow.

@igwatchlover – A collector based on Southeast Asia, Igwatchlover features his own watches, as well as occasionally watches owned by his friends – who are also accomplished collectors.

Amongst the watches that can be found on his account is the unique and elaborate Voutilainen Starry Night Vine, and the Vox Vinum grande sonnerie by Aaron Becsei, and the one-off, regulator-dial minute repeater by Voutilainen.

And he also features a good number of notable complicated watches from the 1990s, which are overlooked today but often just as interesting as the latest creations. @horoptimist – A longtime collector who only started his Instagram account recently, Horoptimist is based in Asia but has managed to visit several independent watchmakers in their home countries, including Habring² in Austria and J.N. Shapiro in the United States.

Importantly, his collection includes not only the big-ticket watches, but also several affordable timepieces, most notably from Habring² (including a tourbillon), which proves that good independent watchmaking can also be accessible.

@burymewithmywatches – A European collector who has been posting more vintage watches of late – and was one of the first in the world to acquire the Audemars Piguet [Re]master01 – Burymewithmywatches is an accomplished collector of independent watchmaking who owns a Dufour Simplicity, lots of F.P. Journe, a few Akrivia, and several examples of Voutilianen including the rare Chronometre 27. 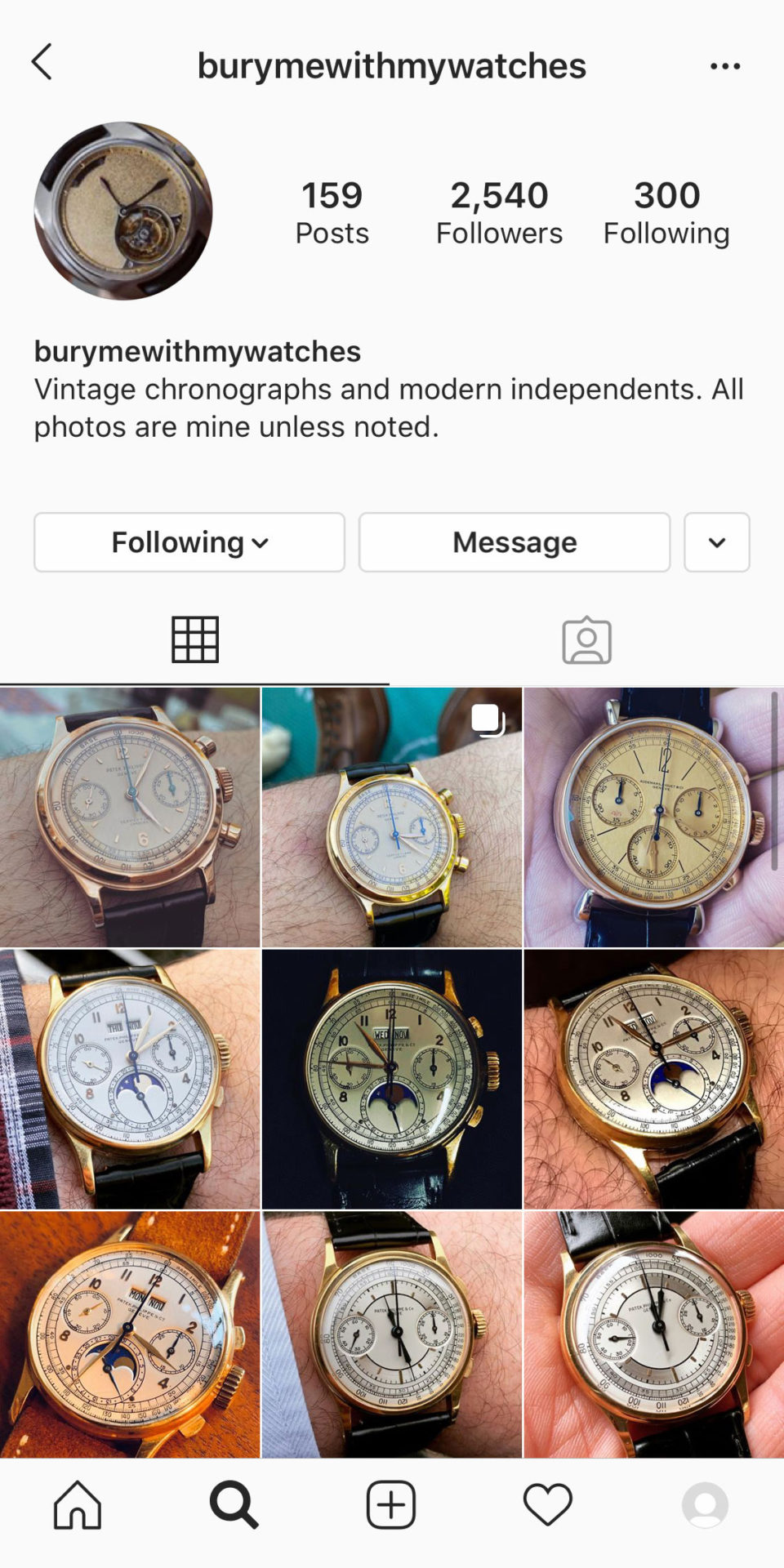 @mywatchdrawer – The collection of Mywatchdrawer is exceptional, with one of the most recent additions being The Blue tourbillon by George Daniels. And the collector, who is located in the United States, also owns a Franck Muller chronograph with perpetual calendar and retrograde equation of time, a indication he is a veteran collector who can appreciate brands for what they once were.

@shani.watch – Also located in the United States, Shani.watch has a collection that includes a good number of notable F.P. Journe watches – including a pair of tourbillons with stone dials – but also a Roger W. Smith Series 2 with uncommon applied numerals, and a Dufour Simplicity. @santa_laura – With an aesthetic more extravagant than the average collector of independent watchmaking, Santa_laura has a collection that includes a diamond-set Harry Winston Opus 3, a unique, fully-engraved Urwerk UR-111C, and the more elegant, extra-large Voutailien Vingt-8 “Moon Pearl”. 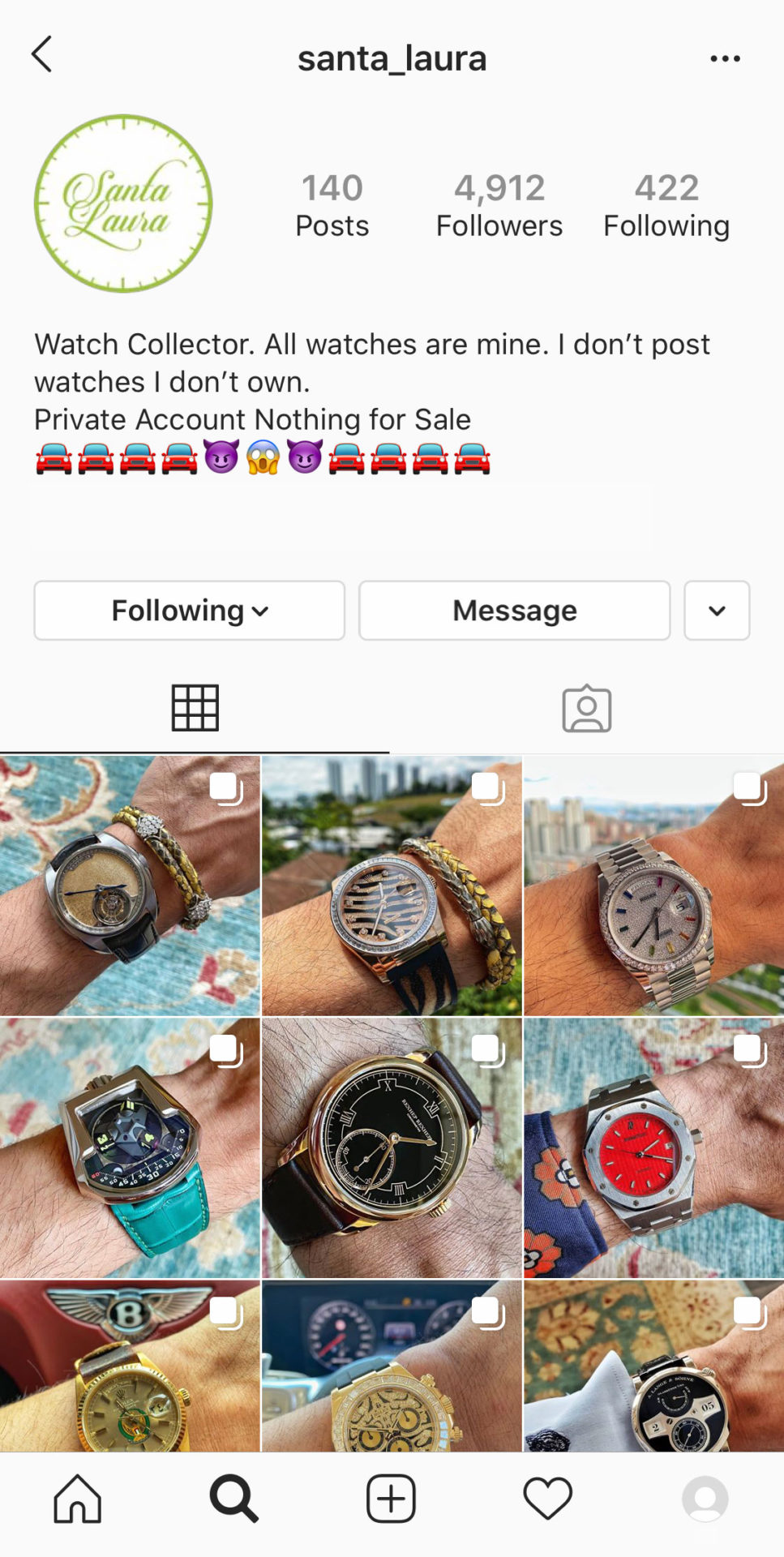 @limsanity8 – A varied collection is depicted on Limsanity8‘s account, ranging from an all-black Greubel Forsey to an unusual J.N. Shapiro with applied numerals. Based in California not far from guilloche specialist J.N. Shapiro, the collector also owns something elegant from Atelier de Chronometrie in Spain, and might be getting another according to some teasers he posted.

@o.husek – A European collector, O.husek‘s collection includes a salmon-dial Greubel Forsey Quadruple Tourbillon and, in contrast, the elegant Haldimann H1 central tourbillon, which really tells you all you need to know. @fumanku – One of the world’s leading dealers of vintage Rolex, Eric Ku is an industry insider, but one with a surprising and strong interest in independent watchmaking (and vintage Cartier).

Amongst his recent acquisitions are two watches I rate highly, the Akrivia Chronometre Contemporain and the H. Moser & Cie. Streamliner Chronograph. And more interesting from a historical perspective is a 1950s Breguet wristwatch with the Peseux 260 chronometer movement, but in white gold instead of the common yellow gold. @alangejourney – And the last account is not about independent watchmaking, but still focused on serious, technical watchmaking. As the name indicates, it’s all about A. Lange & Söhne and includes some of the rarest watches made by the German watchmaker.

The collector, who is American and fairly new to Instagram, owns several important Lange wristwatches, including the mega Datograph Perpetual Tourbillon, and also the Odysseus Datomatic sports watch.