An American watchmaker who unveiled his first watch in 2013, Keaton Myrick has spent the subsequent years refining the 1 of 30, a wristwatch crafted with traditional, artisanal methods. Since then the 38-year old has delivered several examples of the 30-piece edition, each customised to the client’s request in terms of design; the watch pictured is numbered “30/30” and is largely stock, with the only custom option being the engine-turned seconds sub-dial.

Based in Sisters, a town in the Pacific Northwest state of Oregon, Keaton studied watchmaking at the Lititz Watch Technicum (LWT), a school in Pennsylvania established by Rolex, which he joined after graduation. After several years there, he returned to his hometown to set up a workshop specialising in repair and restoration. 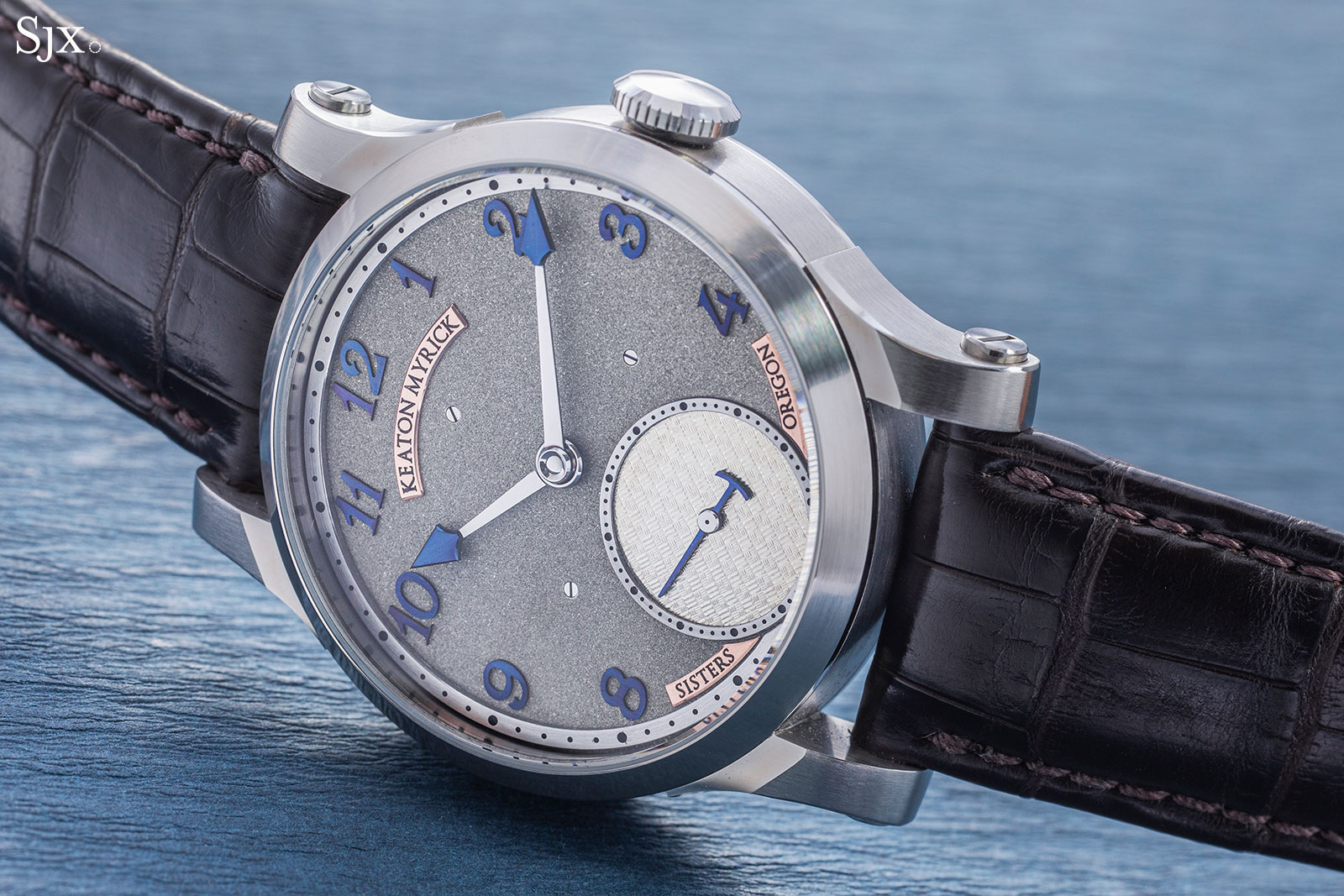 Keaton’s time at LWT was the genesis of the 1 in 30. According to Keaton, each student at the LWT had to build a school watch based on the ETA Unitas 6497 (or the related 6498), a project that evolved into the 1 in 30.

With inspiration from independent watchmakers like Philippe Dufour as well as complicated vintage pocket watches – the historical inspiration is particularly evident in the winding click – Keaton modified and refined the common and robust Unitas movement to create the impressive and original cal. 29.30 inside the 1 in 30.

Being easily available and reliable, the Unitas 6497 and 6498 are popular base movements for independent watchmakers. Even though the cal. 29.30 is based on the modest Unitas 6498-1, it has been substantially reworked.

More importantly, it has been smartly modified, so as to improve both functionality and aesthetics. Most of the crucial components – including the balance wheel, winding click, and balance bridge – are of his own design and make, so the Unitas roots of the movement not readily obvious. 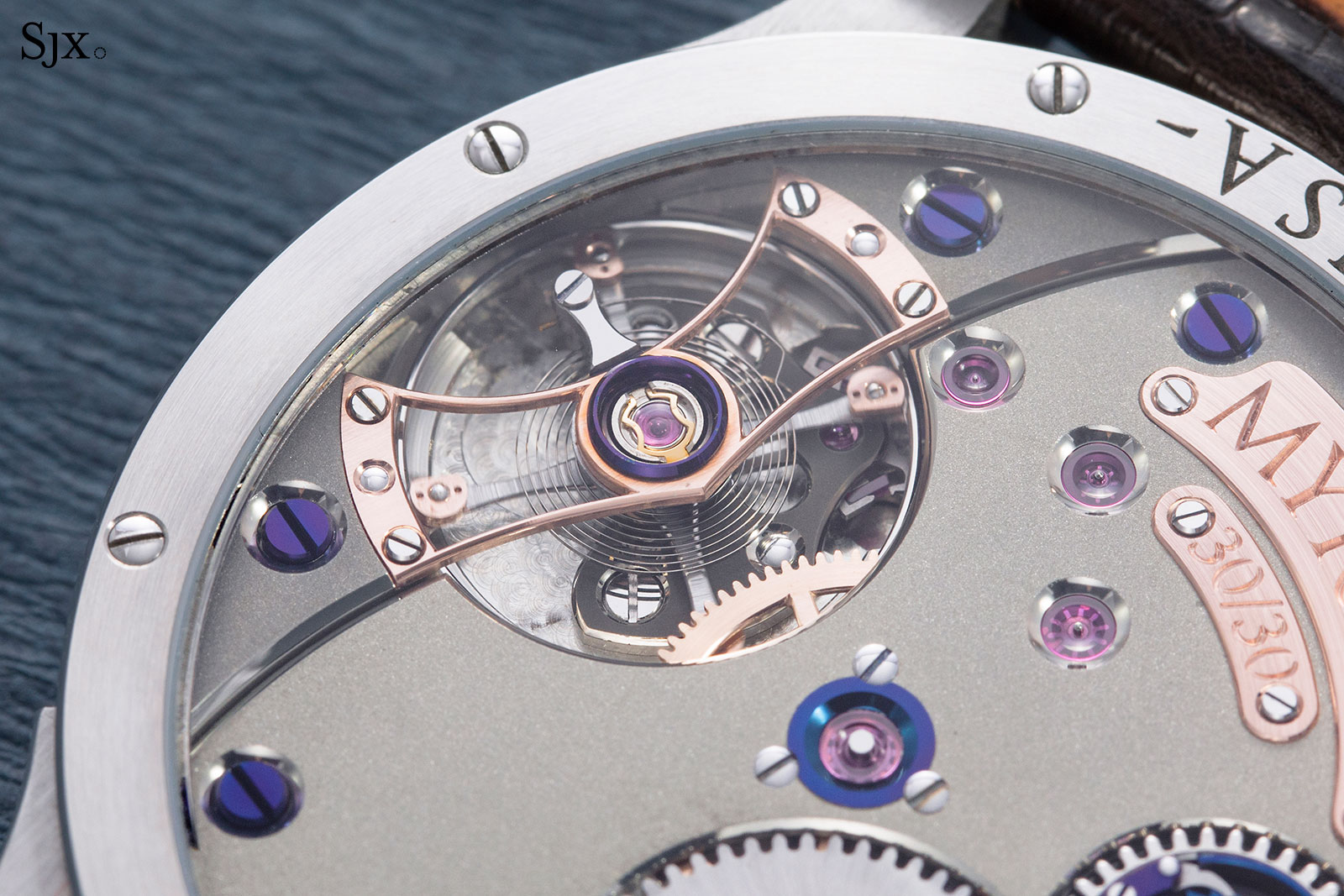 The parts that Keaton produces from scratch are both big and small. He makes the three-quarter plate and the open-worked balance bridge, as well as the grande sonnerie-style winding click on the crown wheel. Also done in-house are almost all the screws and most intriguingly, the adjustable-mass balance wheel as well as the hairspring.

Keaton buys Nivarox 1 wire (which is the highest quality Nivarox alloy) and then forms the hairspring manually. According to Keaton, the process of forming a hairspring is “arduous but gives me control over a hard-to-manage component of the watch”.

Only a few parts of the original Unitas calibre are retained, namely the escapement, wheel train, and barrel. Those components are hidden, and even so they have been slightly modified to accommodate for changed gear ratios. 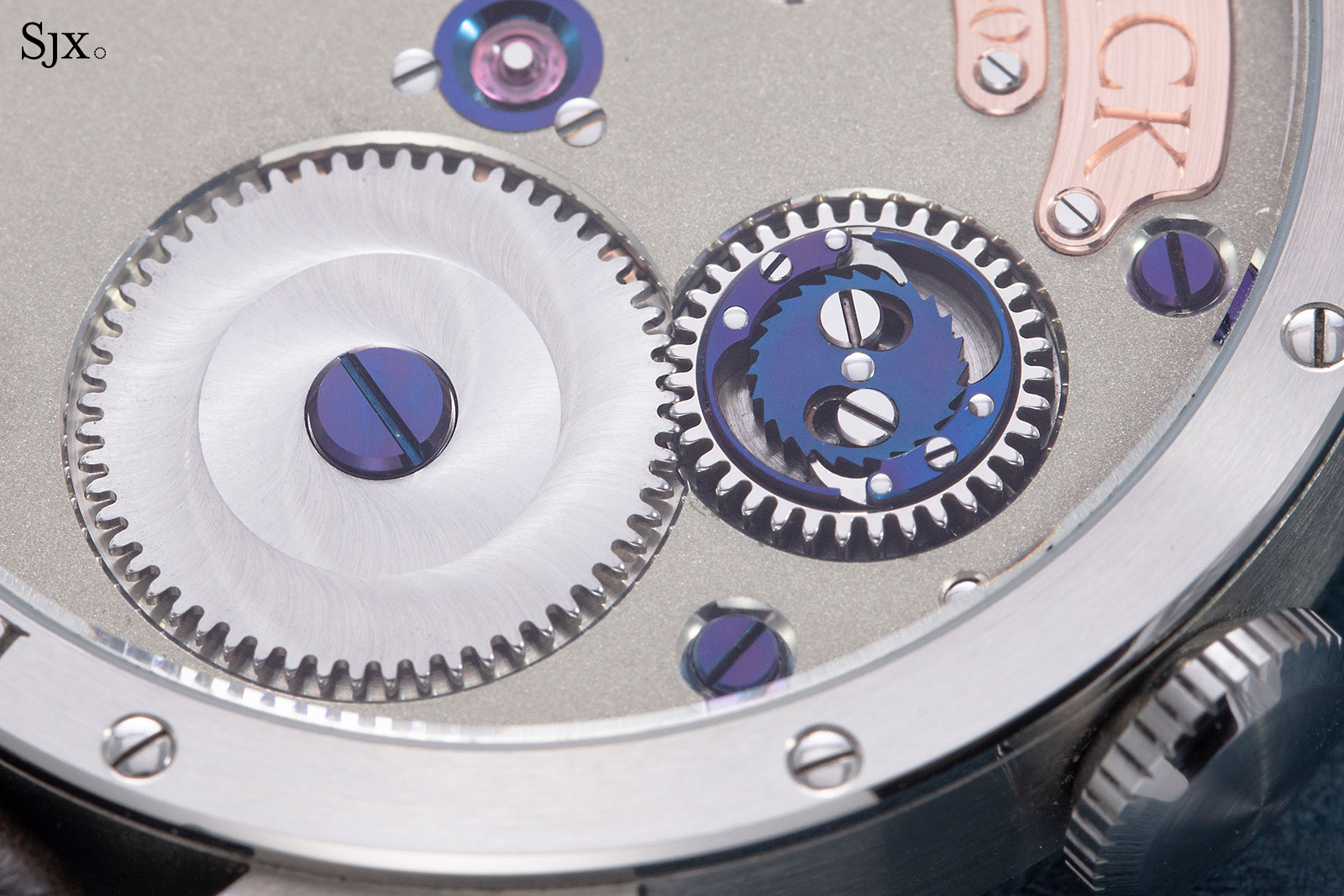 Unsurprisingly, the cal. 29.30 is thoroughly traditional in materials and finish. The three-quarter plate and bridges are German silver, while the balance bridge and plaques are 18k rose gold, as are the regulating masses on the balance wheel. And the tiny but complex winding click is mirror polished and heat blued.

All of the decoration is done by hand and executed to a notably high level. The three-quarter plate is covered with a fine frosting, with its edges featuring a prominent, mirror-polished bevel. More impressive are the especially wide, bowl-shaped countersinks for the jewels and screws, which are also mirror polished. The countersinks are wide enough that those on the edge of the three-quarter plate meet the anglage of the bridge. 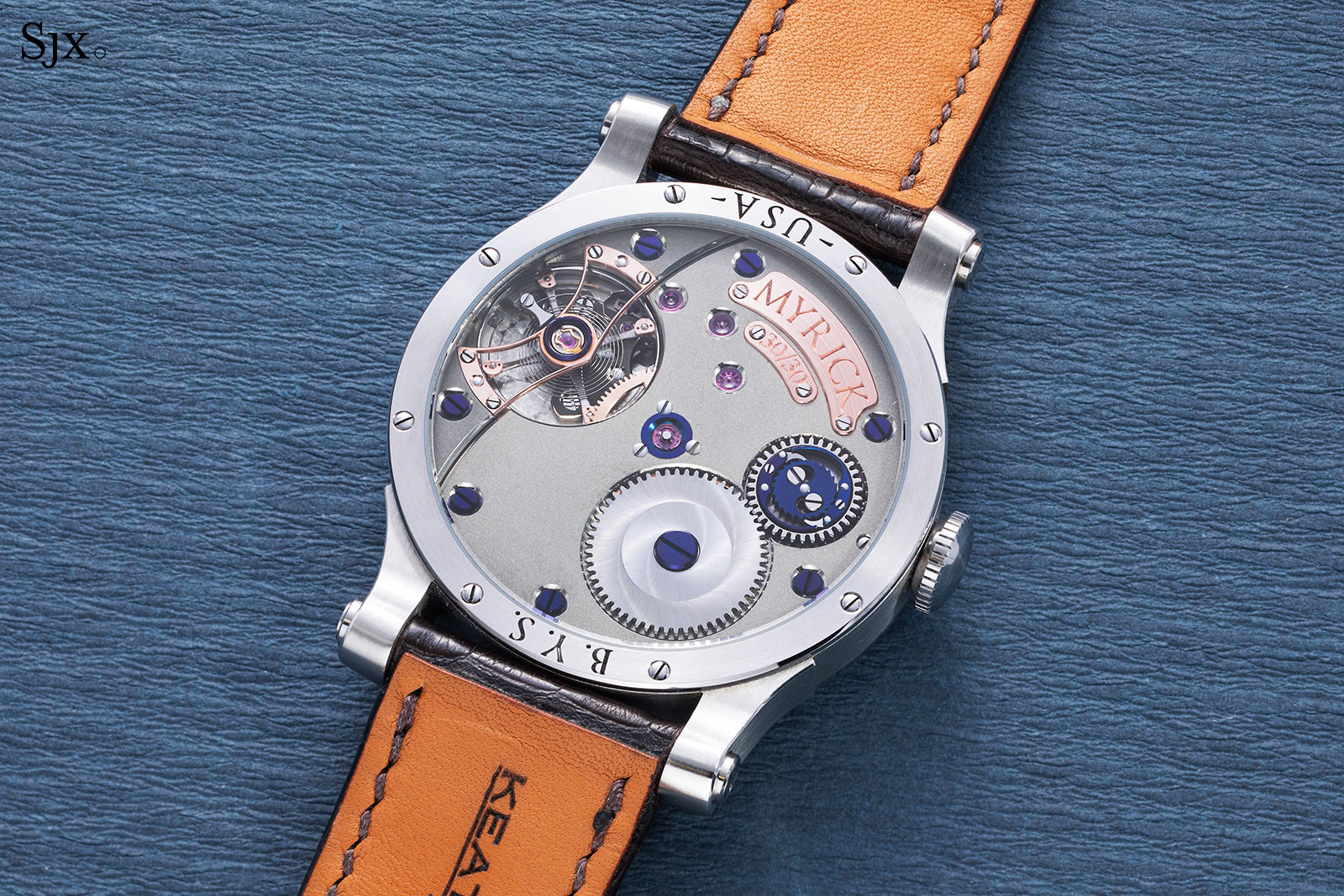 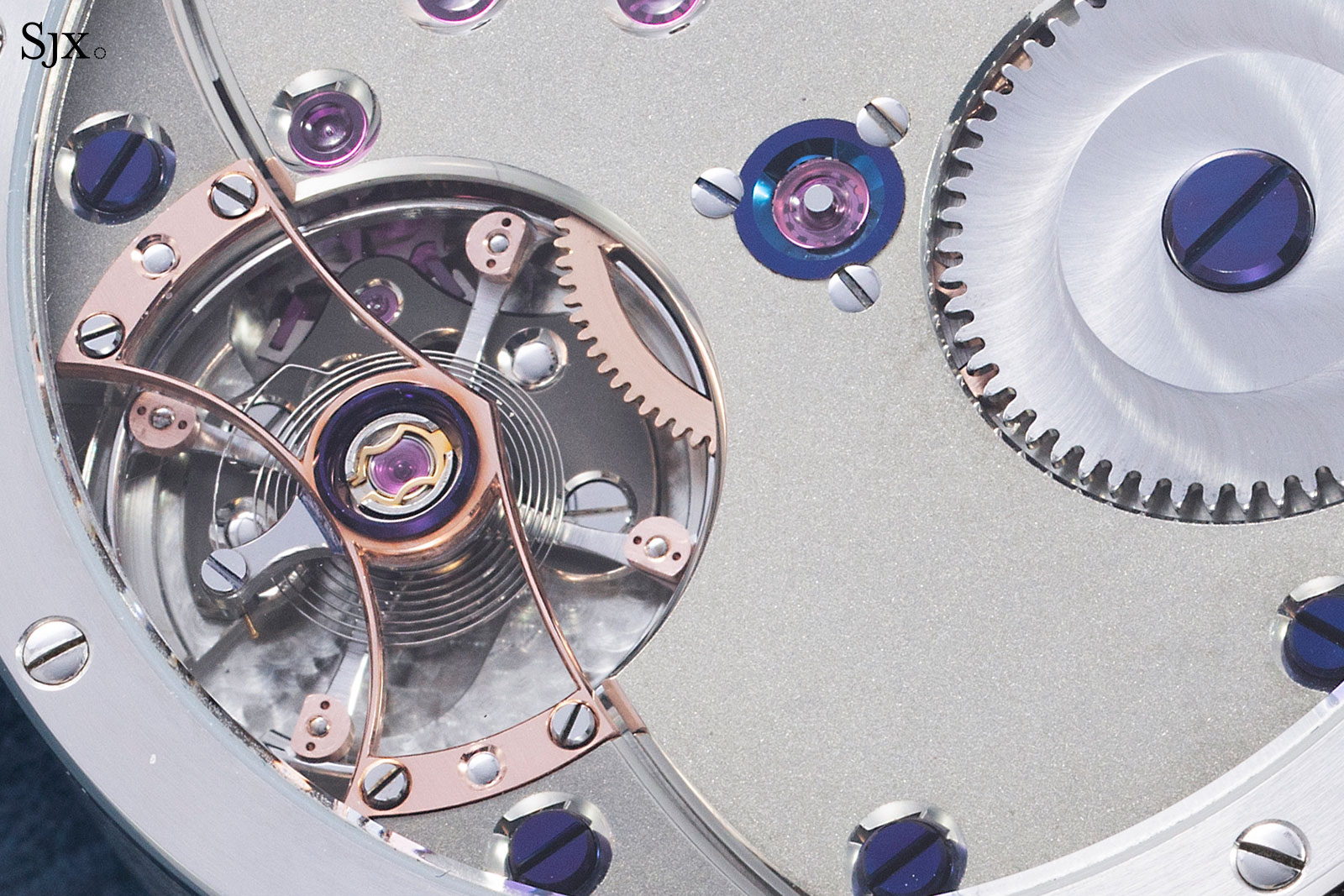 Peer deeper into the movement and the finishing remains equally fine. The bridge for the pallet lever is frosted – to a slightly finer granularity than the three-quarter plate – with bevelled edges and polished countersinks. And it sits on a base plate with notably small spots of perlage.

The same goes for the polished teeth of the barrel ratchet and crown wheels, as well as the mirror-polished surfaces of the grande sonnerie-style winding click. 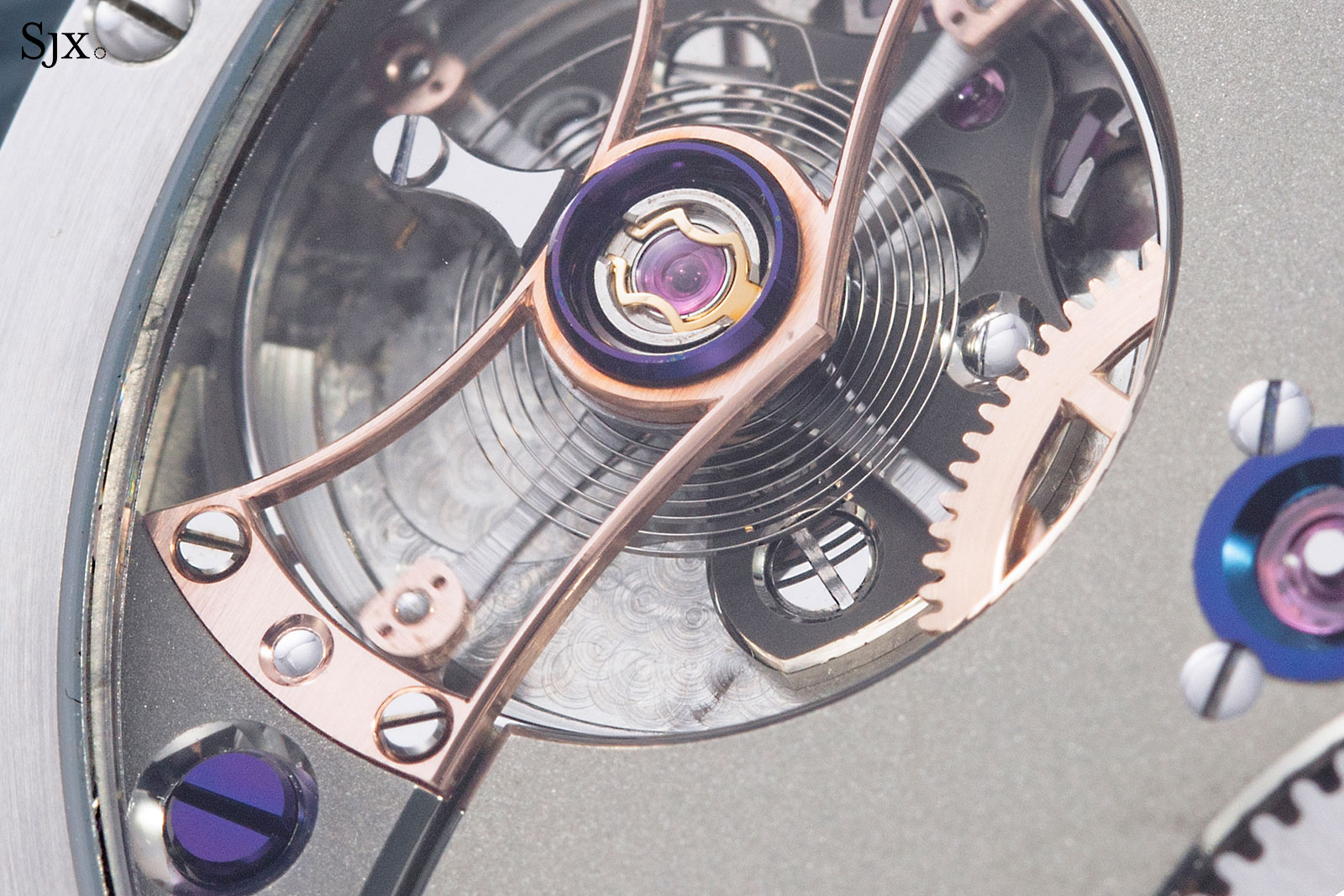 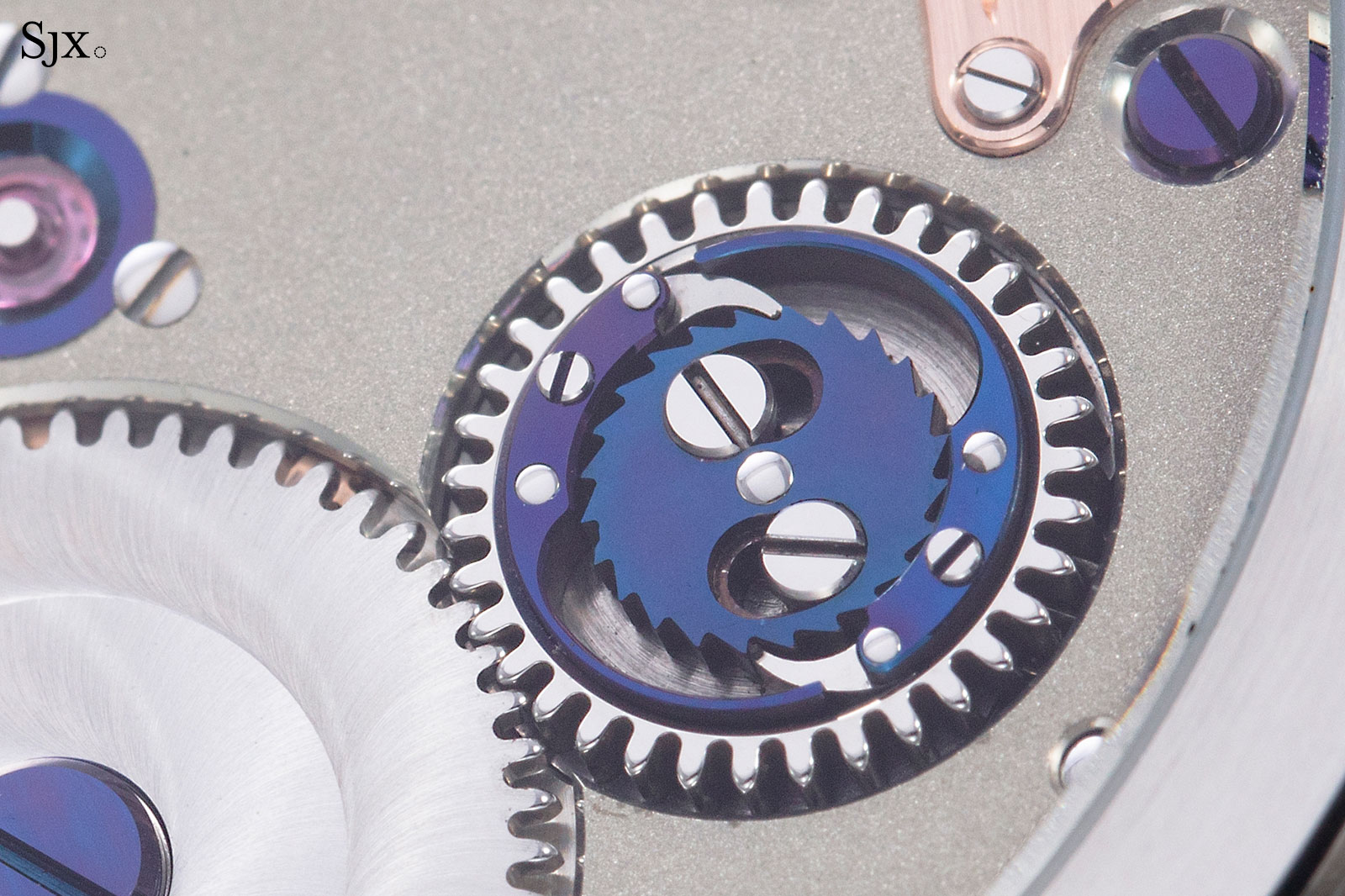 As is expected for a hand-finished watch, particularly one from a young watchmaker, the decoration does have some inconsistencies. Examples include the chamfering of the inner edges of the centre wheel, or stray tool marks on components. But that doesn’t take away from the effort and accomplishment that’s obvious in the movement.

Much like the movement, the external components of the watch are also hand-made and -finished. Majority of them are also produced by Keaton.

Because of the large movement within, the case is 42 mm in diameter, but relatively thin at 10 mm high. Though not overly large, the case has a big presence, primarily due to the wide lugs.

Despite having kept the silhouette of the case straightforward, Keaton has incorporated numerous details into its construction and finish. Amongst the more obvious are the polished bevel around the edges of the lugs as well as the polished flank of the bezel.

Less obvious but indicative of the effort put into finishing the case are the bevelled edges for the collet that holds the lug screw, which is itself finished with a chamfered slot. 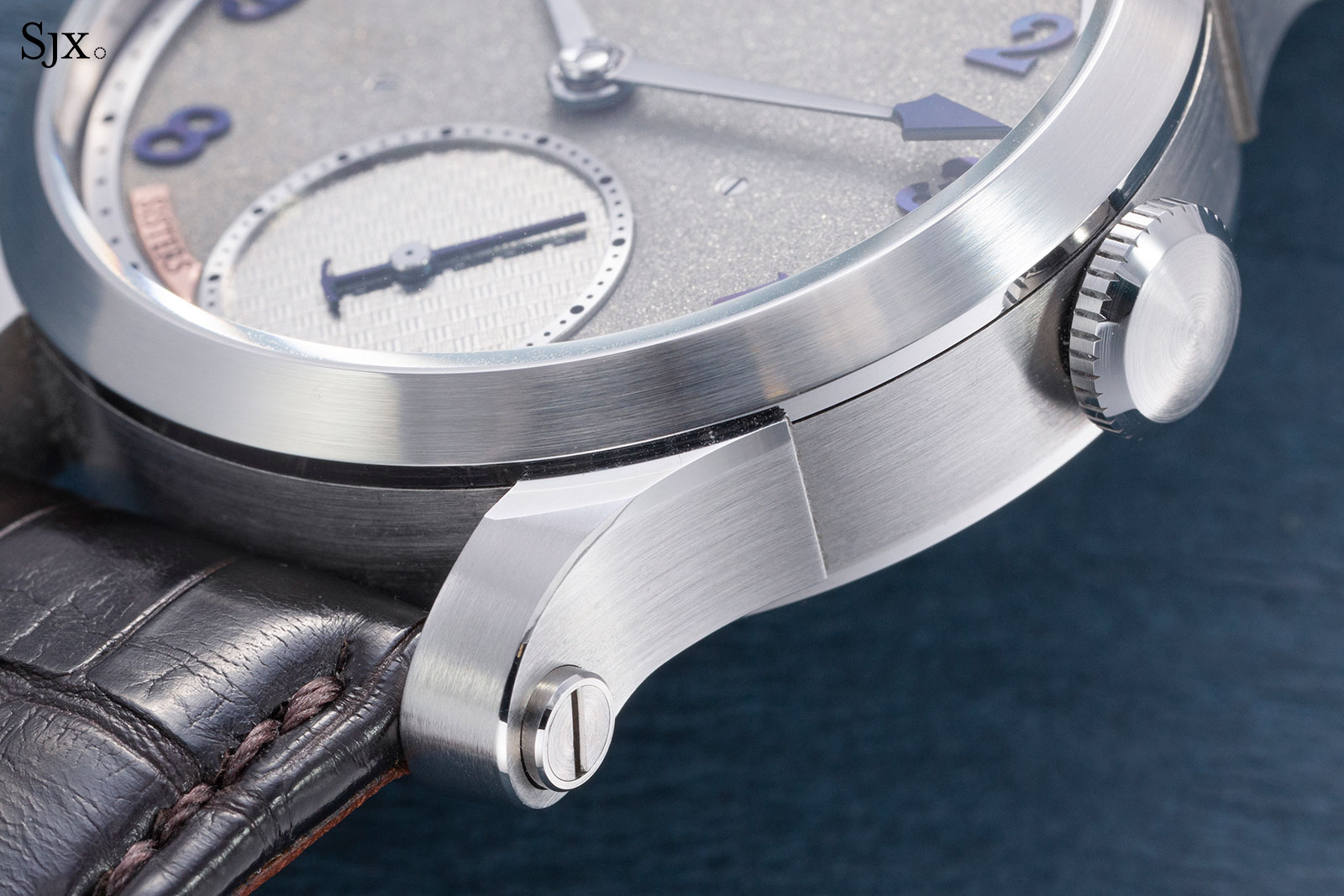 The crown is simple in shape, but effective and well finished with a circular brushed top and polished bevel

Despite the many fine details, the case doesn’t have the refined feel of the movement because of its shape and size. Unsurprisingly, the case design is something that Keaton has been working on.

The case pictured is not the final case design. Since finishing this watch, Keaton has made several refinements to subsequent cases, redesigning the shape for more aesthetic refinement, as well as giving the lugs a pronounced downward curve to improve the fit on the wrist. Over the much longer term, he is toying with the possibility of reducing the diameter to 40.5 mm. Rare is the watchmaker that can execute both the dial and movement to a high level, but Keaton manages to do that.

Though he has produced a variety of styles according to each client’s wishes, Keaton’s dials are mostly made of German silver, with applied numerals and hand-made hands. This particular dial is German silver with a frosted finish that is more coarse than the frosting on the movement. It’s matched with applied numerals in blued steel, and two-tone steel hands with blued tips. The central axis of the hands are mirror polished and countersunk, and the tips are straight grained on top with polished bevels around the edges The plaques on the dial are 18k rose gold, with engravings filled in black lacquer

A customisation unique to this watch, and unlikely to be repeated on another 1 in 30, is the guilloche seconds sub-dial. Made by self-taught American guillocheur Joshua Shapiro, the sub-dial is decorated with the Infinity Weave, a nested pattern of repeating, once-reduced basketweave guilloche that was invented by Mr Shapiro. The 1 in 30 is an impressive timepiece, especially given that Keaton has completed barely a dozen watches to date. Having the Unitas 6498 as a foundation removes some of mystique from the movement, but Keaton has revamped the movement so thoroughly and injected enough of his own taste and craft that it is a moot point.

It is made and finished with skill and a good eye for detail, even for components that are usually overlooked, like the collet for the lugs screws. But as is usually the case with such watches, the finishing inside and out reveals a few missed spots that are entirely forgivable.

All of that craftsmanship is a slow process, and the time taken from order to delivery for the watch pictured was three years.

Priced at US$30,000, with customisations costing more, the 1 in 30 is reasonably priced as artisanal-independent watches go. And if it’s anything to go by, Keaton’s next project should be worth keeping an eye on.

Limited edition: 30 pieces, each customised according to the client’s wishes
Availability: Direct from Keaton Myrick
Price: Starting from US$30,000

To find out more or order, visit Keatonmyrick.com.