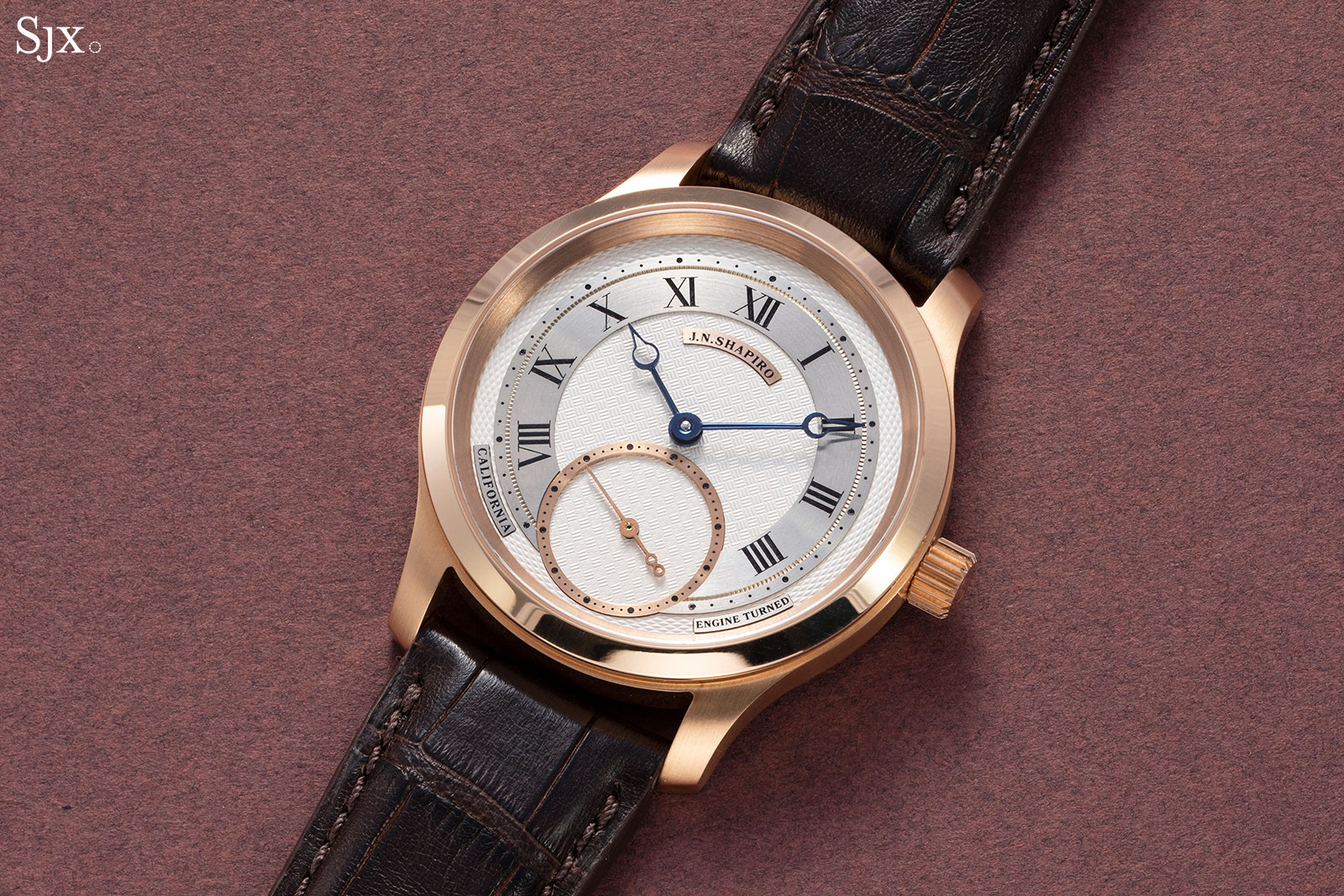 An educator by profession, Josh Shapiro had a longtime interest in watchmaking, which sharpened into a pursuit of traditional engine turning in 2013. After several years of practice – and a roomful of guilloche machines – the self-taught guillocheur and watchmaker produced a handful of dials for American watchmaker David Walter in 2016.

And last year Josh launched his own brand, J.N. Shapiro, which he now pursues full-time, while remaining a part-time vice principal at a high school in Los Angeles. His debut watch was the Infinity Series, named after the Infinity Weave, a proprietary guilloche pattern he invented. 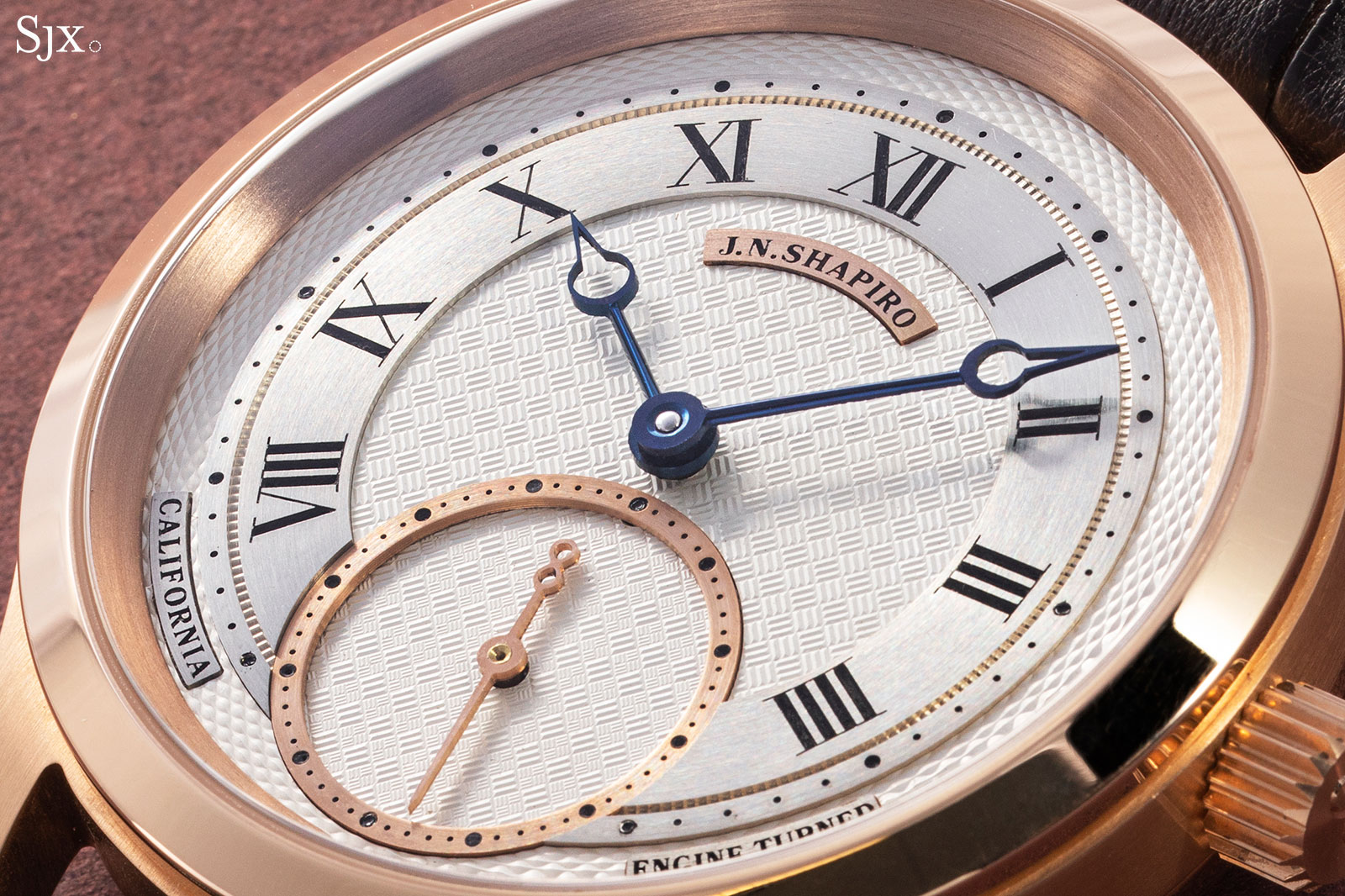 The first J.N. Shapiro Infinity Series delivered, the watch pictured here, was finished earlier this year – and is numbered “N.01”. Though Josh offers a variety of options for the case and dial colours, this watch hews closely to the prototype, with a rose gold case, silver dial, and blue hands.

It’s important to note this is actually the first watch Josh sold, and consequently shows some of the inevitable inconsistencies of a watchmaker’s early work. There are a couple of stray marks and burrs on the dial, and a bit of lint, but the early work of independent watchmakers is usually inconsistent, which is part of the hand-finished charm, and also proof of how artisans evolve. Josh’s subsequent dials have improved tremendously. Josh Shapiro with one of his straight-line machines. Photo – J.N. Shapiro

The Infinity Series has a simple but effective 40mm case – it is just the right size and keeps attention on the dial – containing an unusual movement produced by a German specialist. But its defining quality is the guilloche dial, which is constructed and decorated the traditional way, almost all by hand. From production to decoration, it takes about 150 hours just to finish the dial – with almost a third of that just for the small seconds. 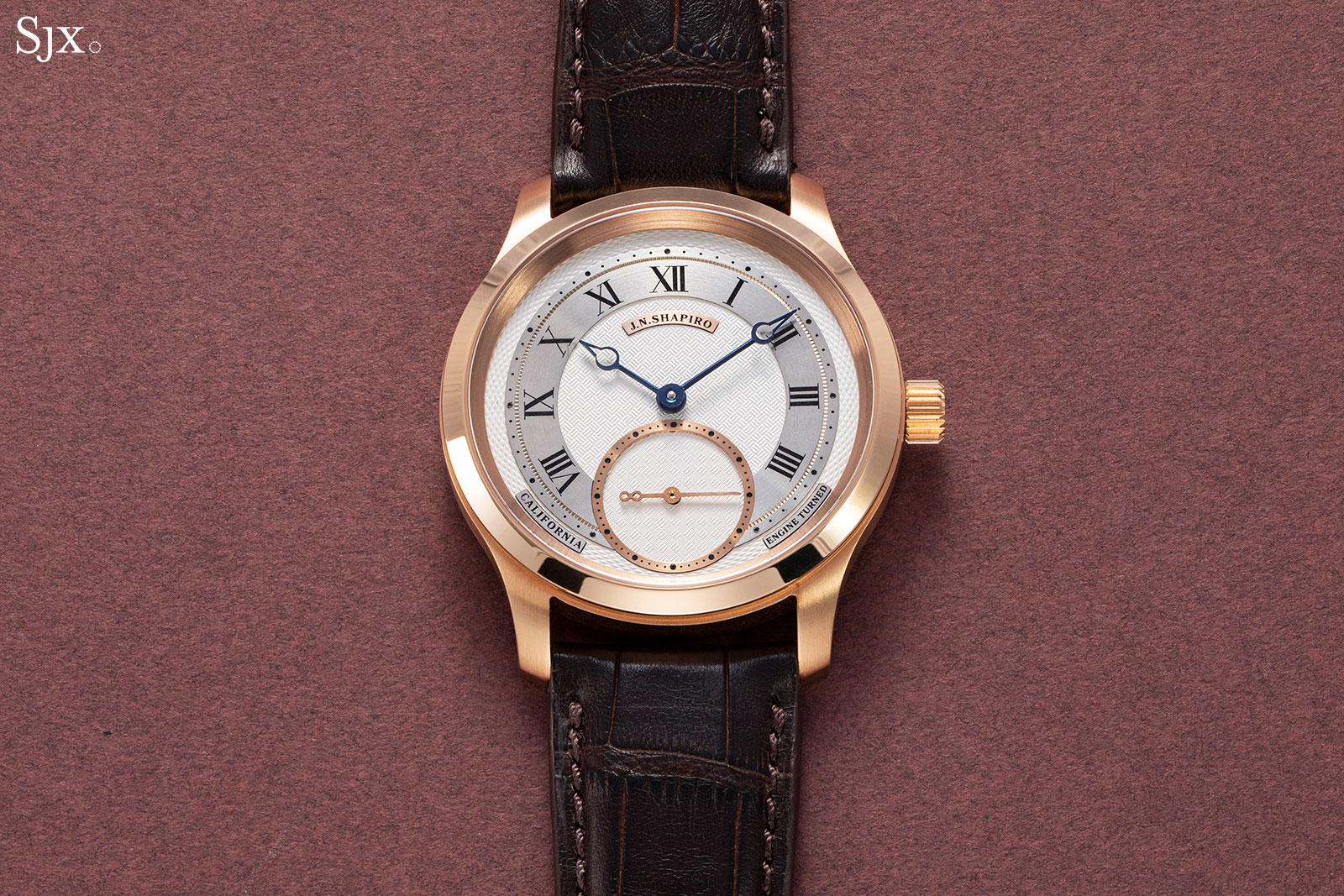 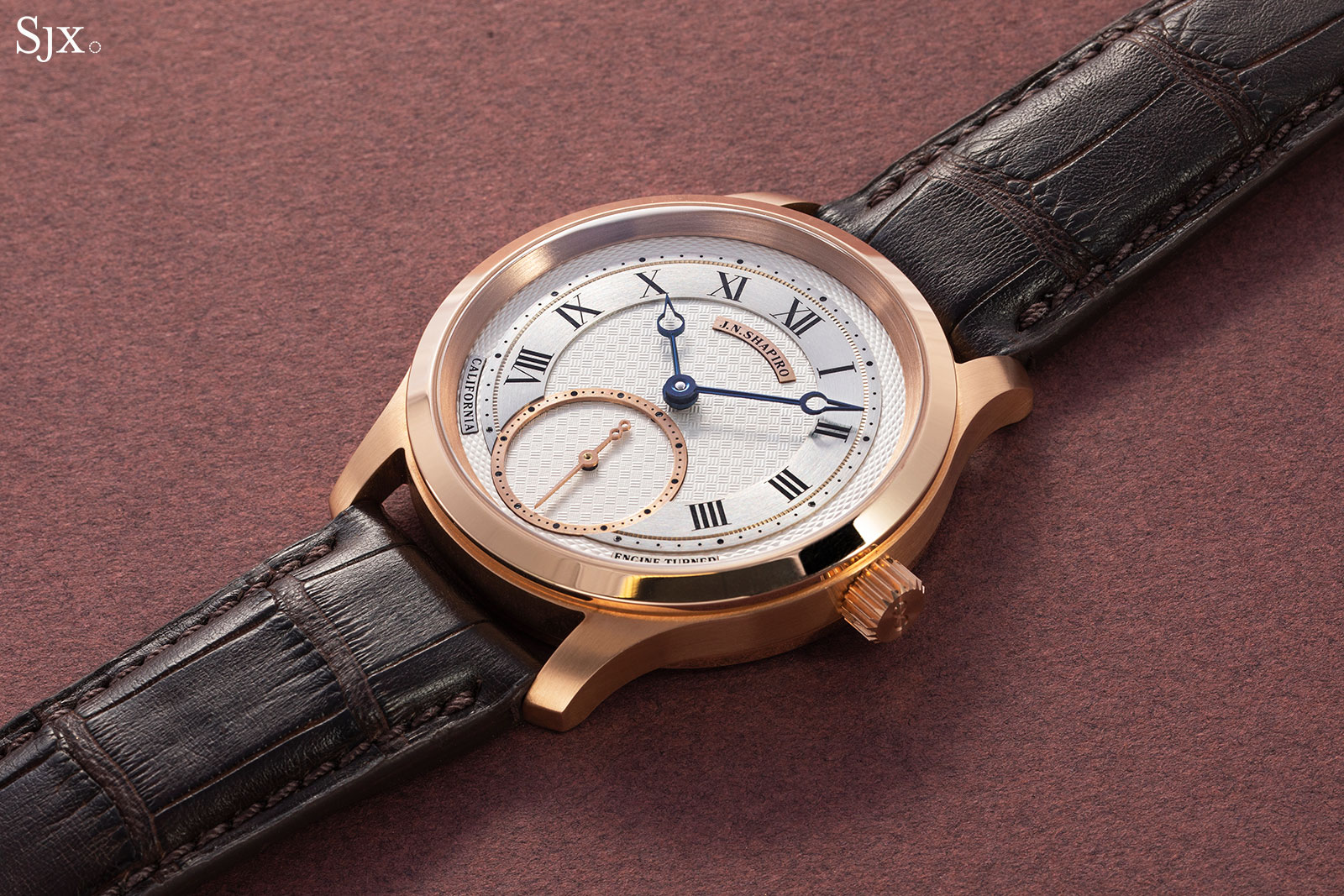 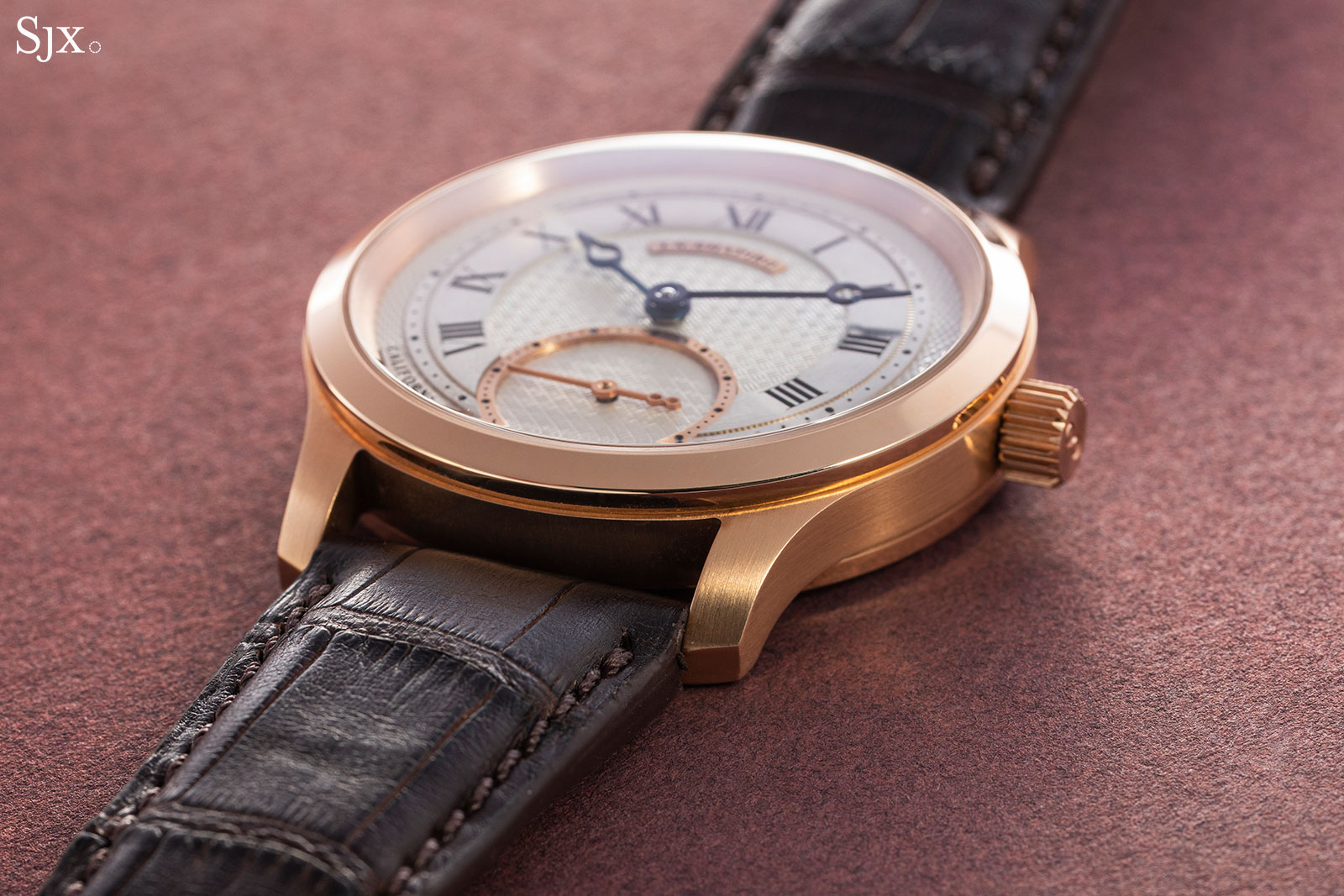 The case is simply finished, with a polished bezel and brushed middle 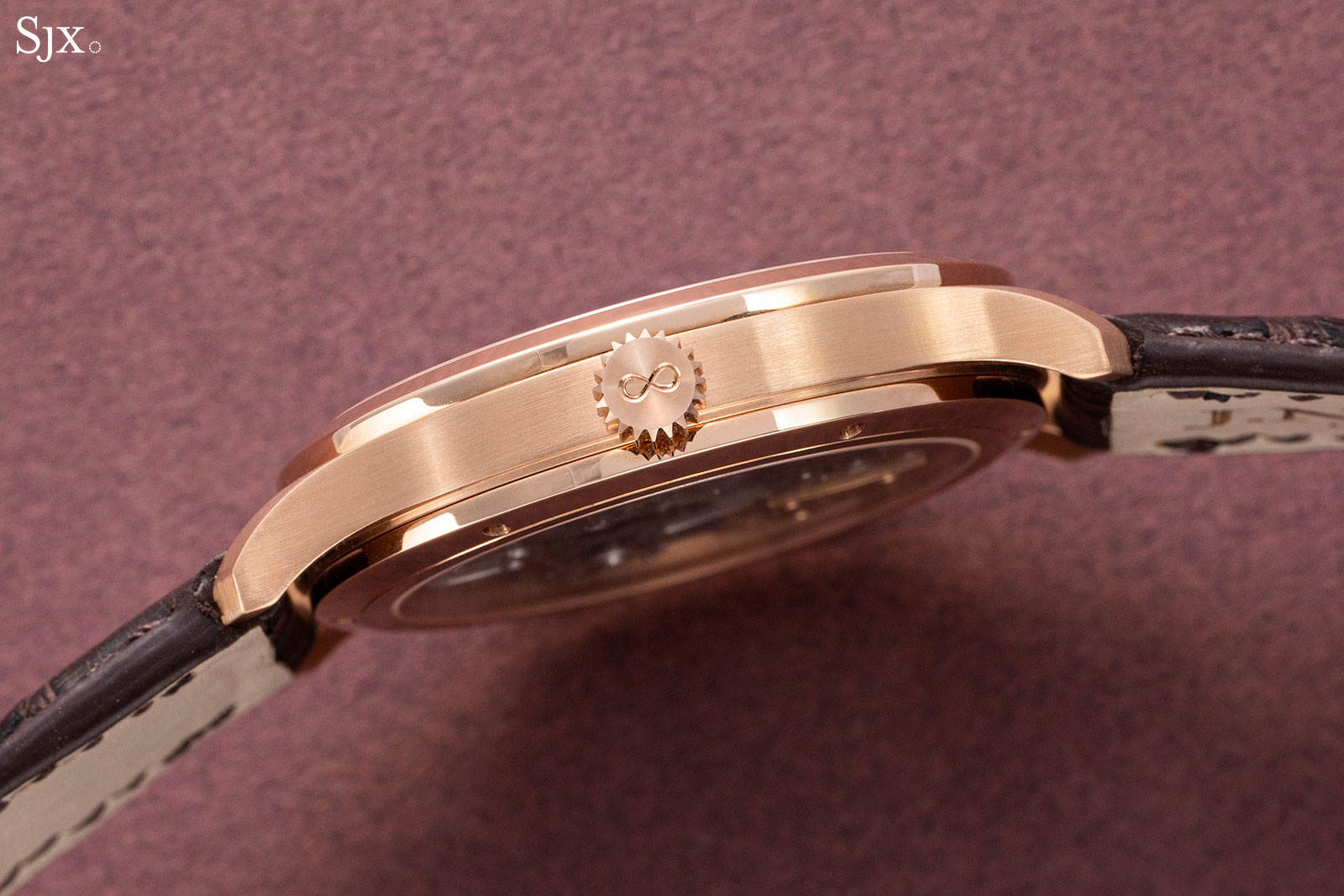 An infinity symbol is engraved on the crown 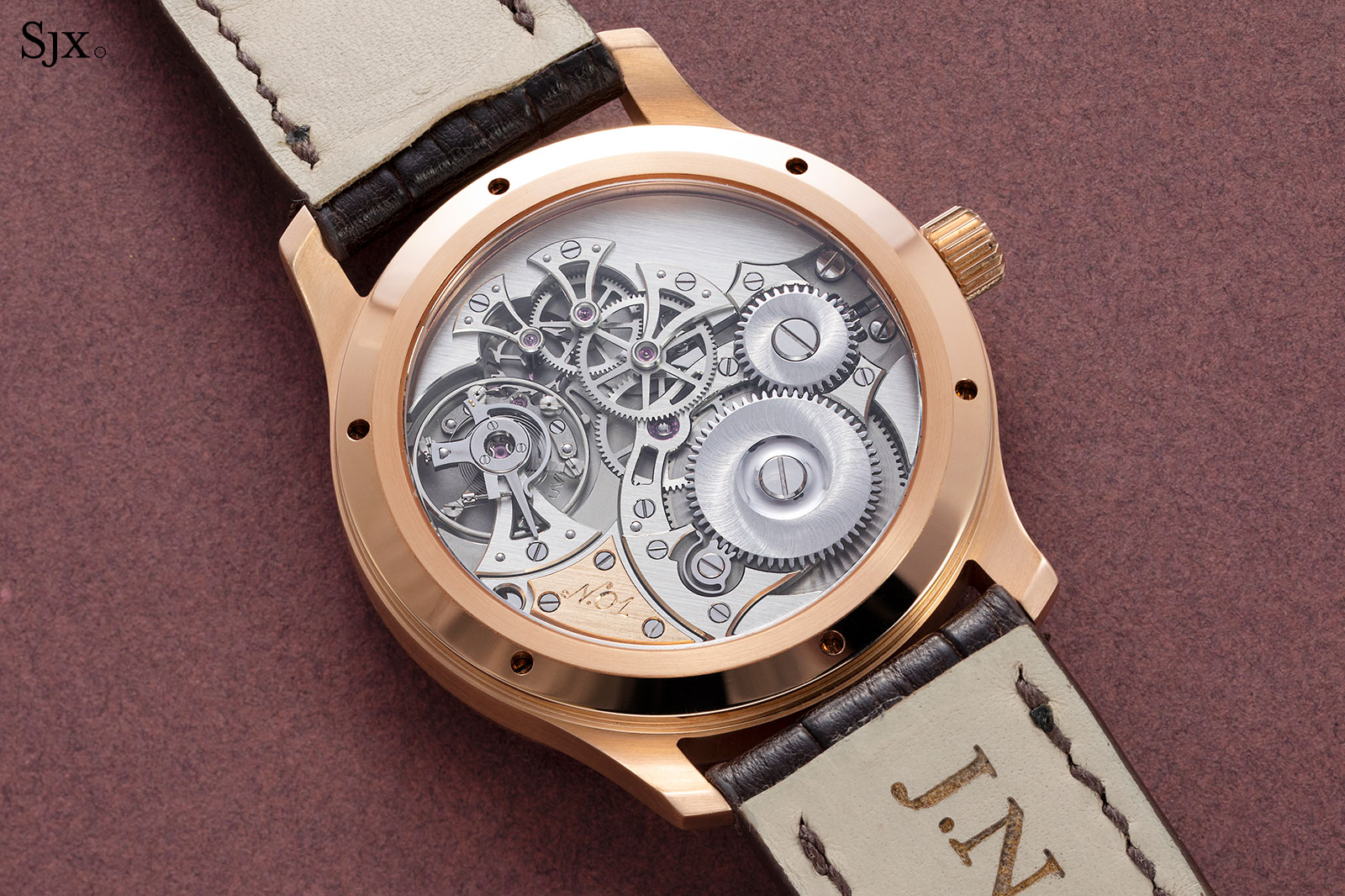 The UWD 33.1 movement inside

Made entirely of silver, save for the seconds track and brand plaque in 18k red gold, the dial is finished with guilloche that’s done with a hand-operated rose engine, and even the concentric brushing of the chapter rings is done by hand.

In fact, even the silvered finish of the guilloche components is done by the old fashioned way. The soft, silvery finish is applied after the dial has been engine turned, and done much like how Breguet did it in the 19th century: the dial is heated with a blowtorch, so that a black oxide layer forms on its surface, and then dipped in acid, which strips away the oxide layer and impurities. What’s left is a surface layer of pure silver, which is accentuated by repeating the process several times to create an even, bright finish on the dial. 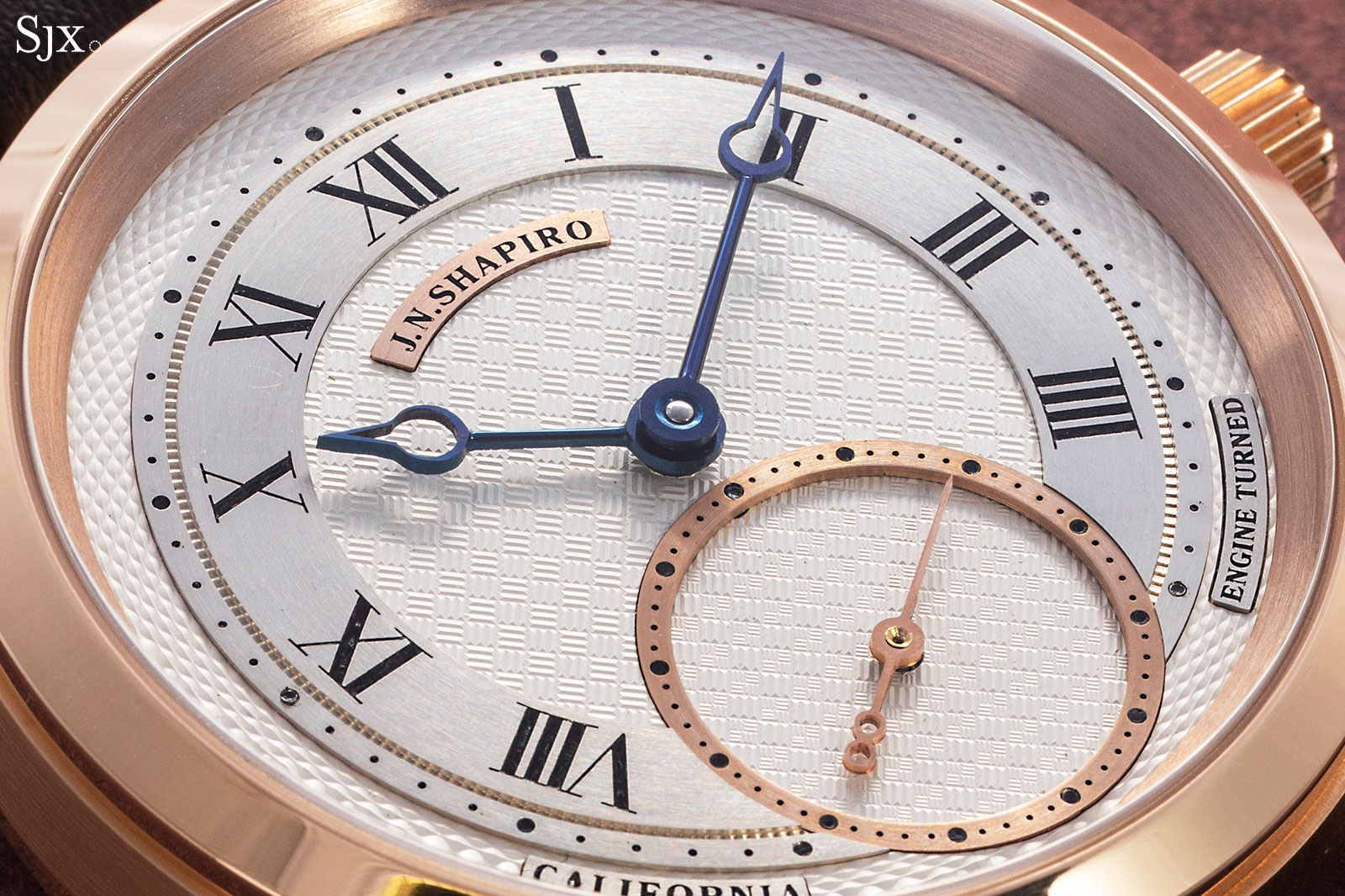 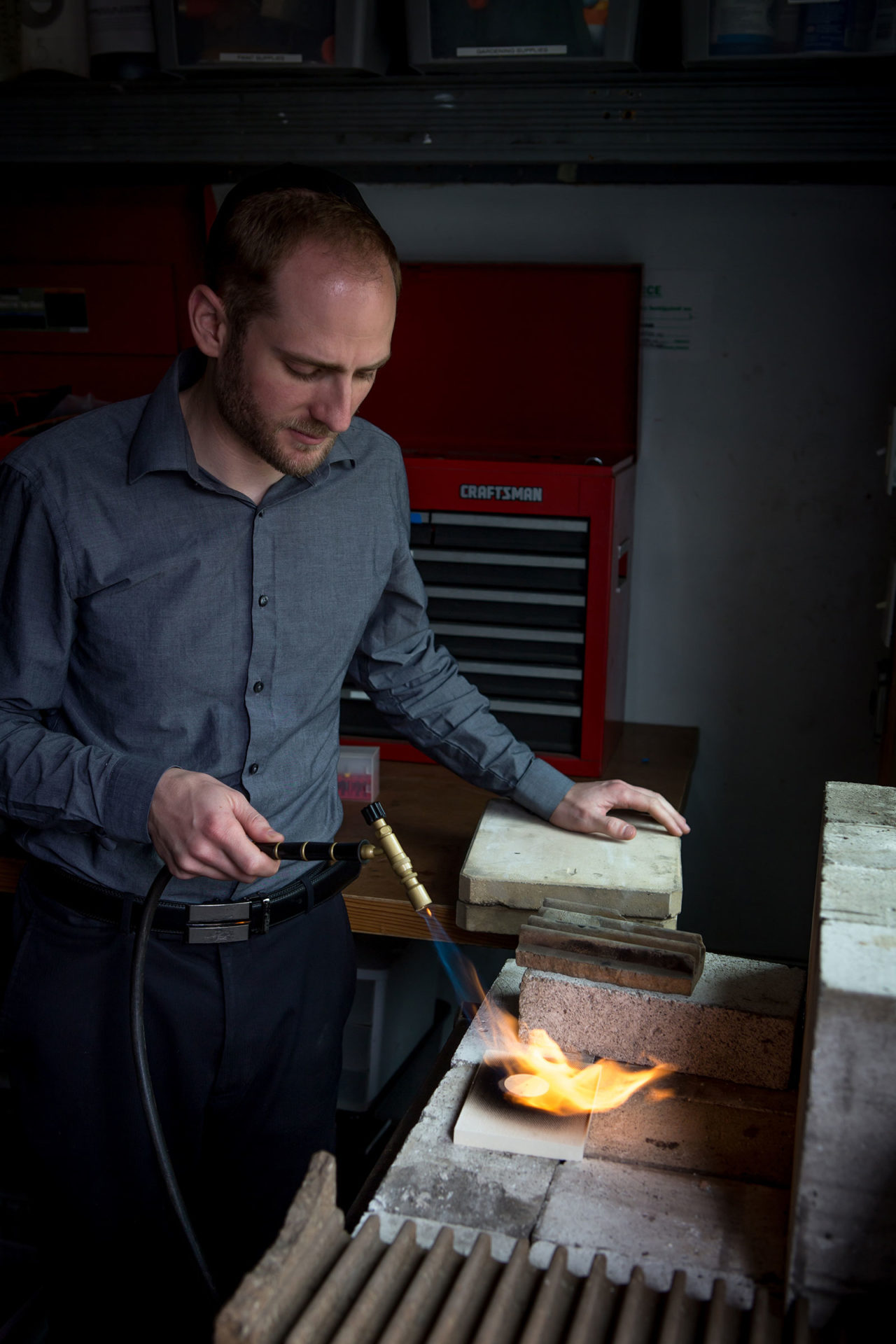 On the watch pictured, the markings on the dial are engraved by laser – explaining the clean and neat lines – but refined by hand with a graver, and then filled with India ink. But certain subsequent dials were entirely hand engraved at the customers’ request.

As for the hands, the blanks are cut by laser, a necessary in order to achieve the sharp inner tip. Then the blanks are rounded, polished and blued by hand, resulting in hands that are substantial in size but refined in shape and detail. 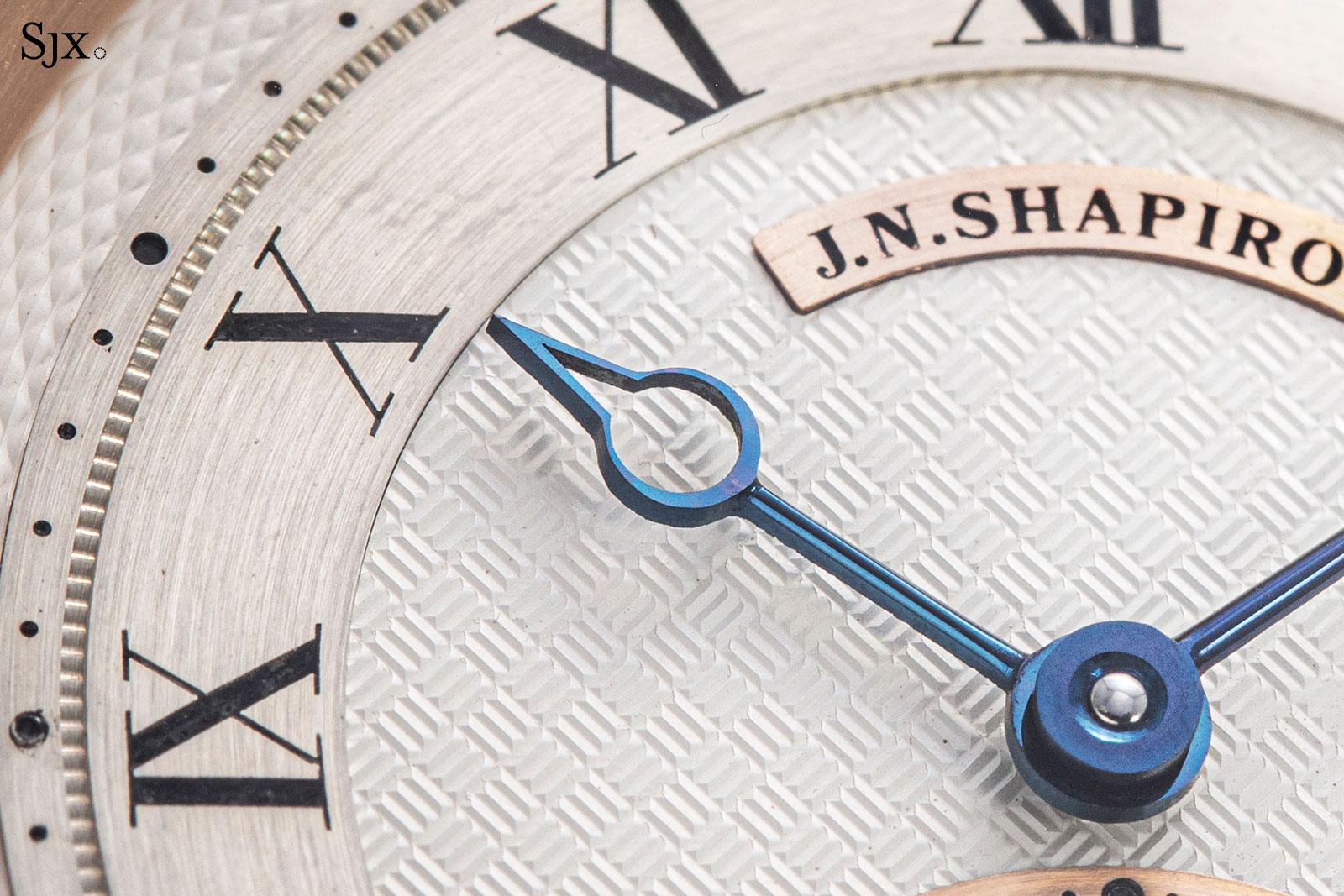 The tips of the hands are sharply defined, but the stems are rounded and polished, a contrast only achievable by hand

But the most important element of the dial is the guilloche.

Guilloche, or engine-turning, is a decorative, geometric pattern engraved on a metal surface. At its most traditional, it is done with a rose engine or straight-line machines, a manually-operated machine that engraves while guided by a metal template known as a pattern bar.

With three straight-line machines and one rose engine in his workshop, Josh does all of his own guillochage, which totals three distinct patterns on the Infinity Series, with the most challenging being the Infinity Weave on the subsidiary seconds that requiring 40 hours to finish. Engraving the Infinity Weave required a custom pattern bar, which Josh designed and is now patent pending. The Infinity Weave is a nested pattern of the traditional basketweave guilloche – the weave repeats on itself once, on a smaller scale, creating a remarkably intricate pattern.

The delicacy of the engine turning is incredible – the smallest square within the Infinity Weave is tinier than the pinion holding the seconds hand. At that size, it is easy to make a fatal mistake given the size of the graver relative to the pattern, making it especially difficult to complete. 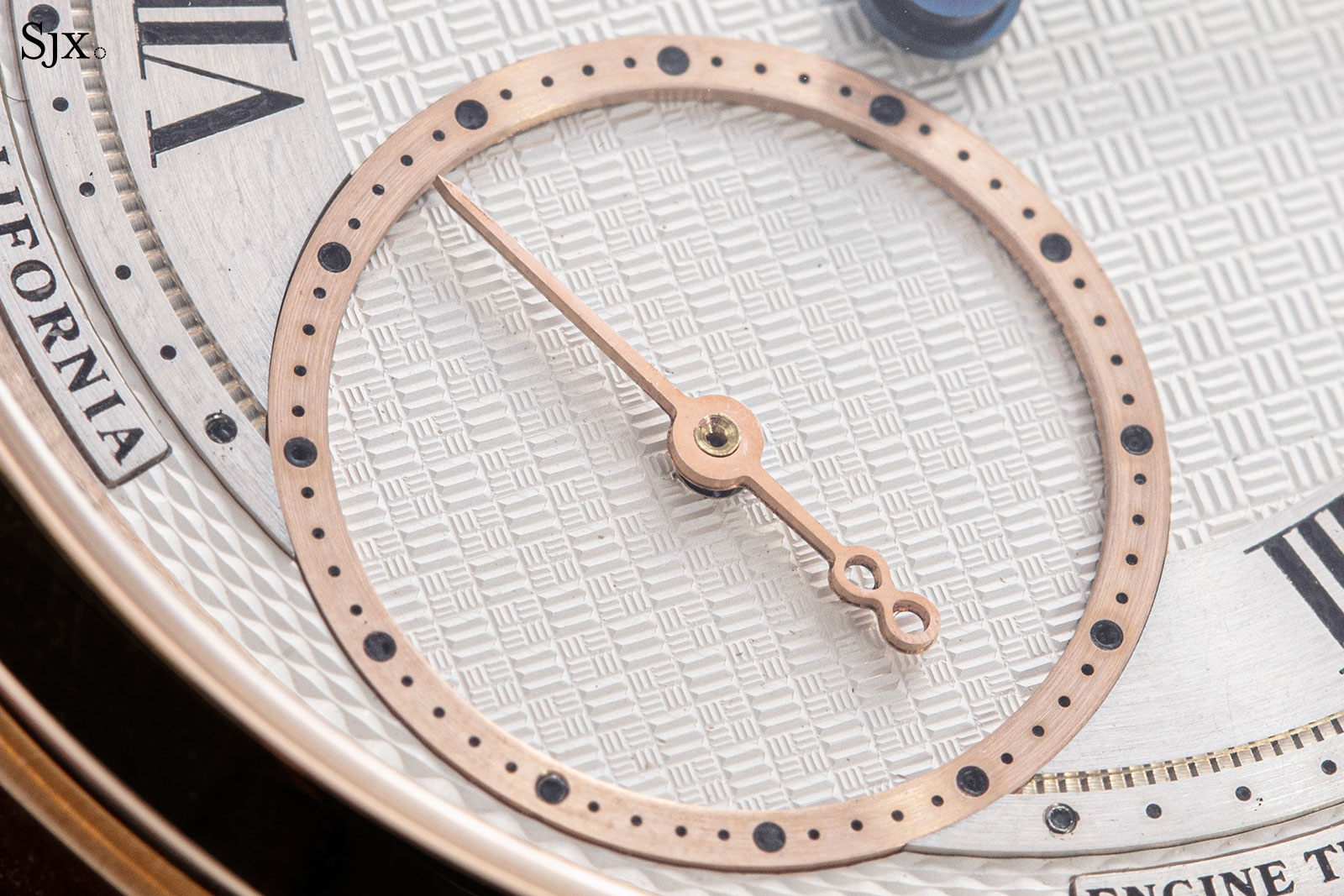 The seconds hand is 18k gold, but it lacks the rounded, polished finish of the larger hands

The rest of the dial is finished in more classical engine-turning, with a grain d’orge, or barleycorn, pattern on the outermost section, and basketweave for the central portion.

While the style of the dial is obviously reminiscent of Roger W. Smith and George Daniels, the look is descended from Breguet and other 19th century watchmakers. Though it’s most associated with the two English watchmakers today, it was common in the 1980s and 1990s, when the Breguet style was the de facto style for most independent watchmakers. Timepieces from that era, by the likes of Daniel Roth, Franck Muller, Thomas Engel, often shared a similar look.

But there is a valid criticism to be made, and that’s the unnecessary plates at four and seven. They neither inform nor decorate, and can be done away with. 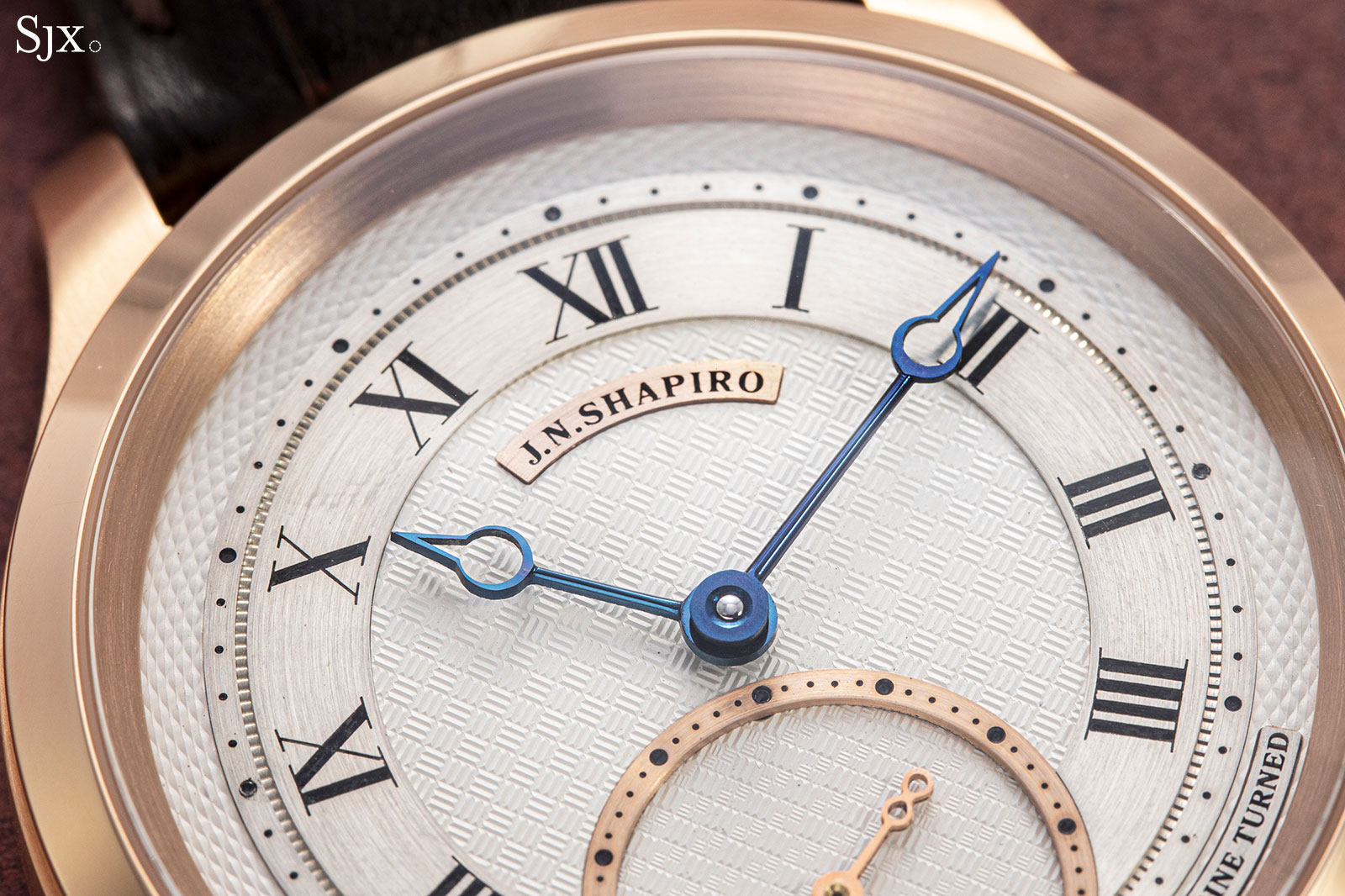 A less obvious testament to the quality of the dial is its construction. While nearly all multi-part dials are made by soldered their constituent parts together, the Infinity Series dial is secured by screws. According to Josh, only him and Roger W. Smith make dials like this.

It’s made up of seven parts, held together by screws in the back – five screws for the hours chapter ring and two for the seconds track. Wth their bottoms hollowed out and filled with India ink, the bottoms of each screw are cleverly camouflaged as markings on the minute and seconds tracks, but are discernible up close. The screws for the hour chapter ring are at 3, 5, 7, 9 and 12 o’clock, and for the seconds, at 6 and 12. 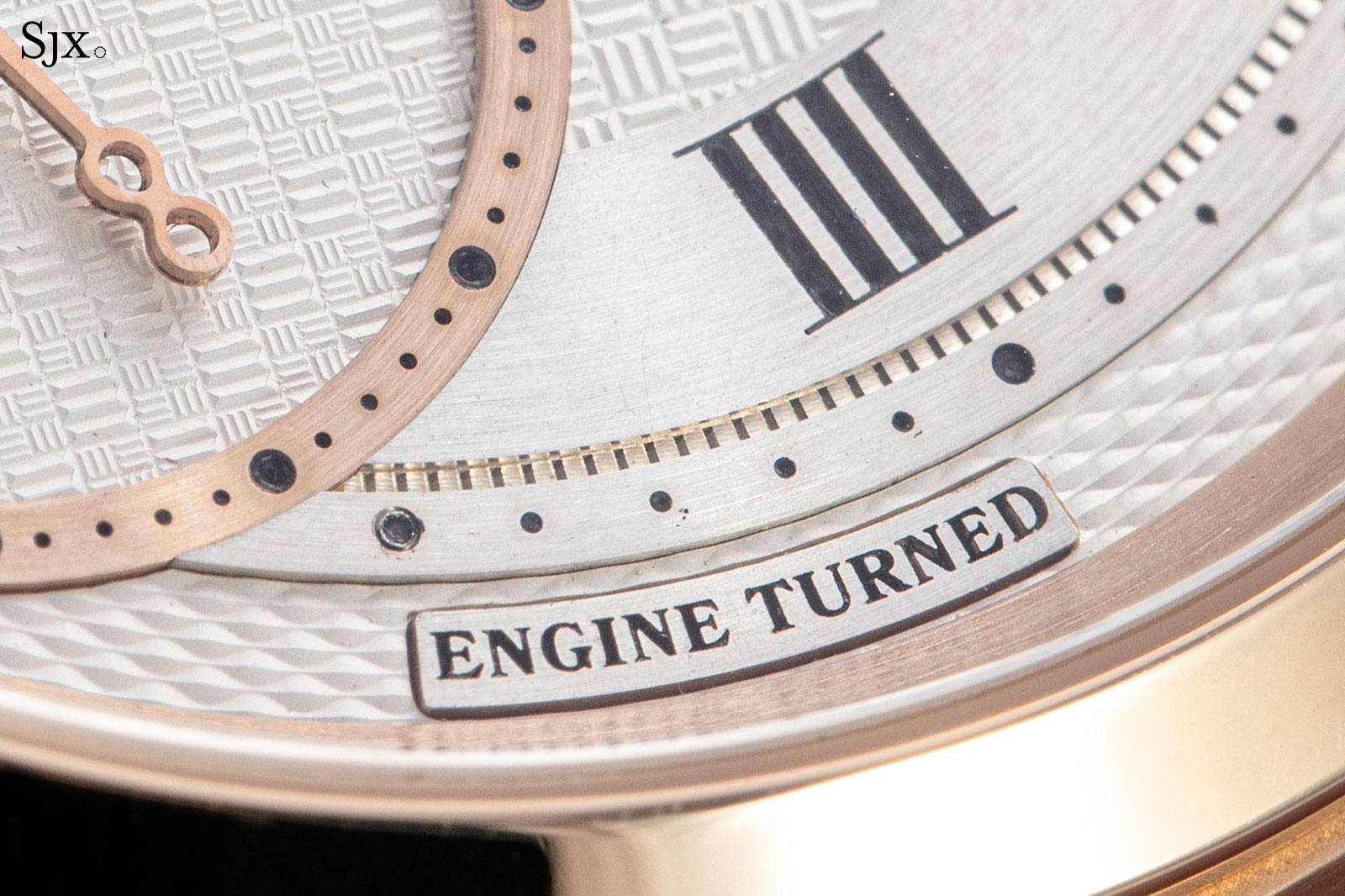 The use of screws is not an affectation, but intended to ensure maximum longevity for the dial. Because it can easily be taken apart, a damaged section of the dial can be repaired or replaced individually, preserving the rest of the dial.

The only shortcoming of the dial, besides the handling marks mentioned earlier, is the fit of the various components. The tolerances are not watertight, so there are gaps of varying degrees between the dial parts, with the most prominent being the two plates at four and seven o’clock.

For the movement, Josh turned to Uhren-Werke-Dresden (UWD), a movement producer that’s part of German independent watchmaker Lang & Heyne (which recently parted ways with its cofounder Marco Lang, leaving neither Lang nor Heyne at the company).

Set up as a maker of high quality movements, which are based on calibres developed by Lang & Heyne, UWD aimed to become a movement supplier of choice to high-end independent brands. That ambition has yet to materialise, and UWD only has a few customers, the best known being Sinn and the rest being little-known German brands, with each buying just a handful of movements.

UWD’s lack of commercial success, however, does not detract from the quality of its movements. The UWD 33.1 used in the Infinity Series is a large, 33mm movement with an unusual, open architecture that also boasts elaborate detailing. Most of the movement parts have angular forms and sharp corners – making them more challenging to fabricate – while the bridges for the barrel and centre wheel are open-worked, as are the cocks for the gear train and escape wheel. Add to that the monochromatic, rhodium finish for nearly all the parts, and the result is a modern-looking movement that is slightly incongruous with the traditional styling on the front.

The only bit of colour on the movement is an 18k gold plate bearing the serial number of the watch that’s been hand-engraved by Artur Akmaev, a Russian watchmaker who specialises in skeletonised, engraved movements and now works for Josh. 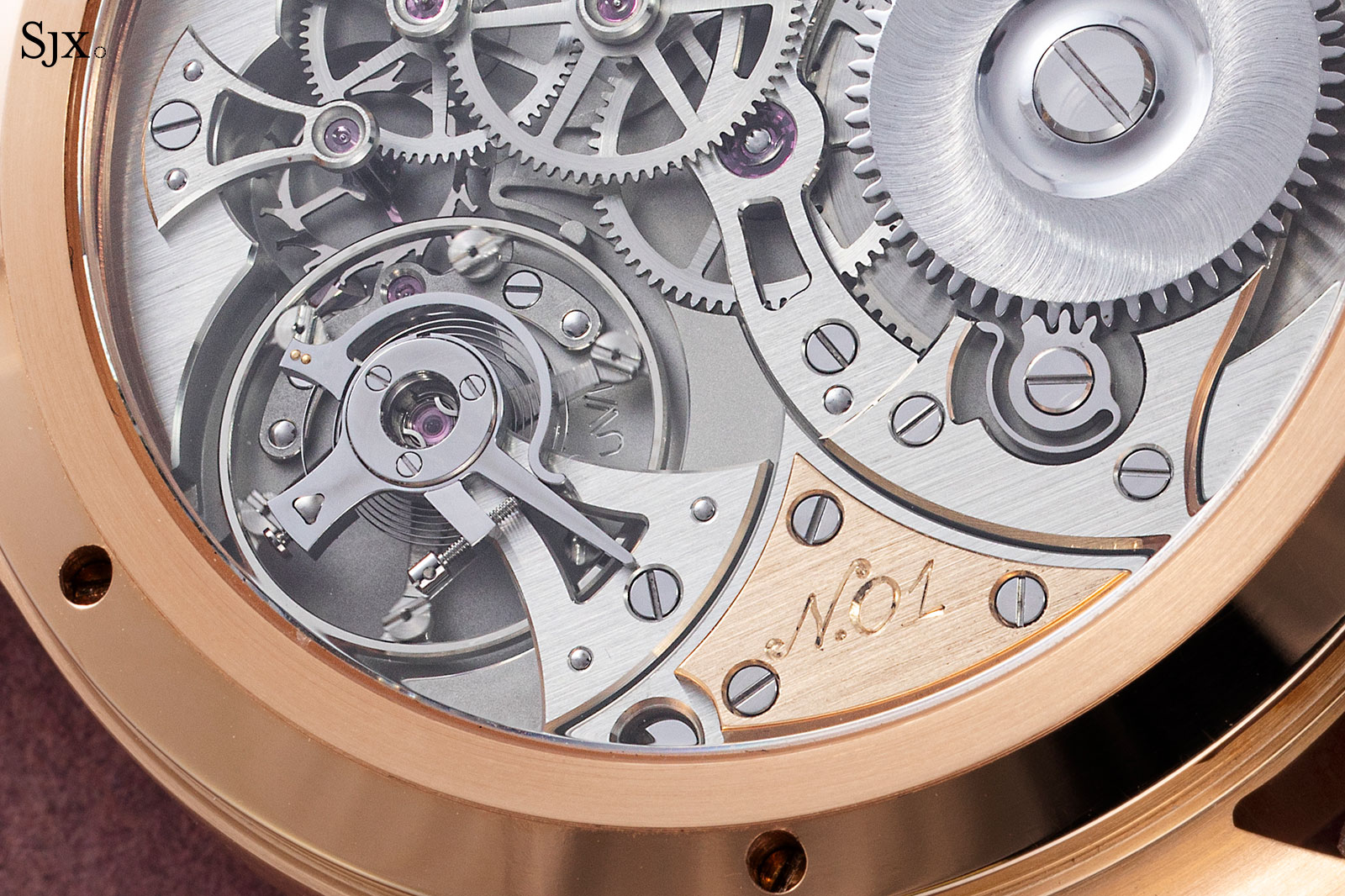 All of the components are intricately shaped and open-worked, and also appear to be produced to notably high standards. Similarly, the decoration of the movement is mostly mechanically applied, but done extremely well and also comprehensively – even the frosted base plate below has bevelled edges.

All of the bridges and cocks are finished with a clean, liner brushing on the top surfaces, complemented by sharply defined bevelled edges, which show faint machining marks, indicating they are cut by a CNC machine. 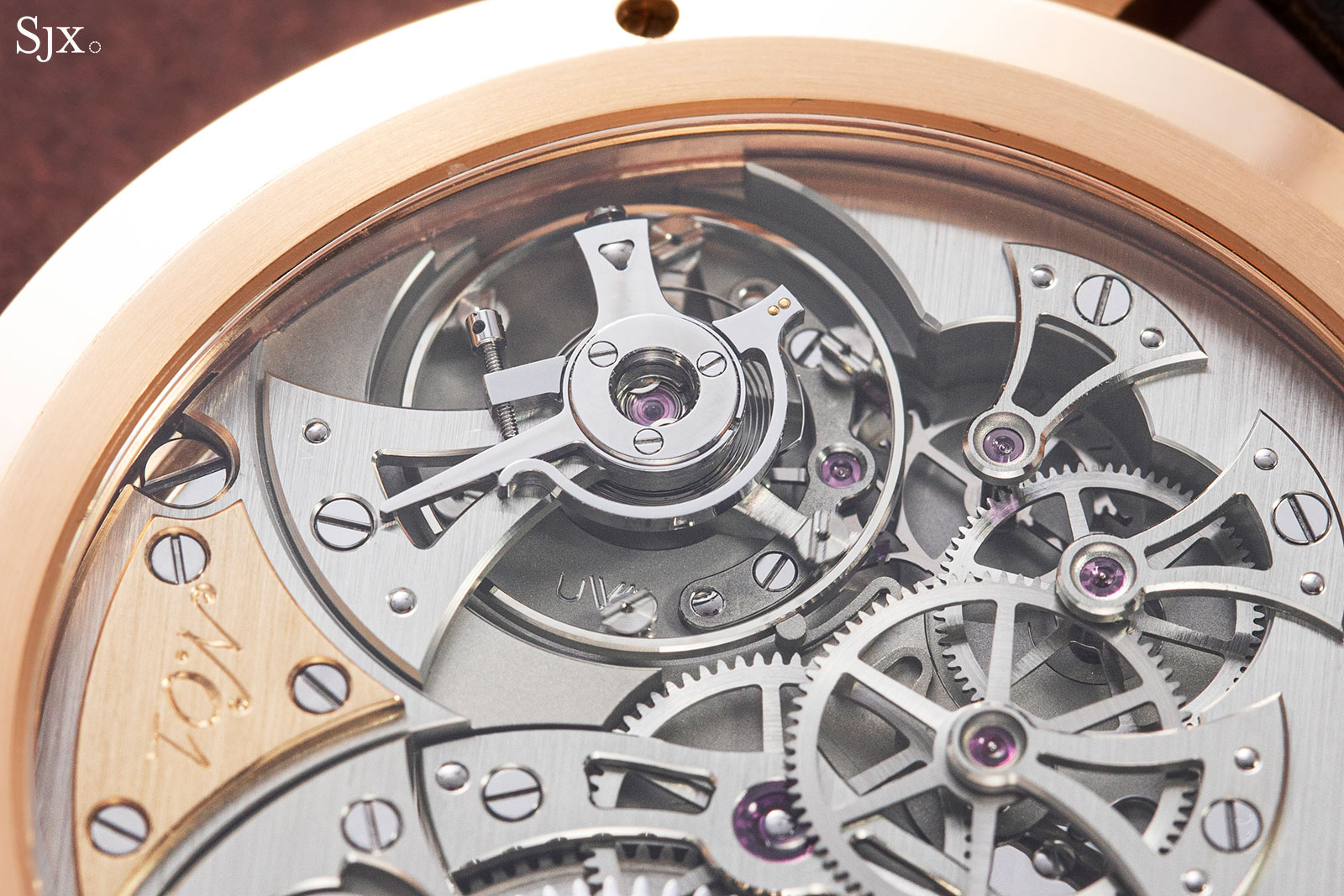 The UWD 33.1 will eventually be phased out, as Josh is currently working on his own movement, which will be an impressive counterpart to his guilloche dial. He expects it will be ready for launch in about a year.

The guilloche on the Infinity Series is an exceedingly impressive, and on par with the industry’s best.

The watch does fall short on a few areas, like the cleanliness of the dial and the mismatched movement aesthetics, they are unsurprising, being typical for a fresh independent watchmaker. What is more surprising is how accomplished the guilloche is, especially for a self-taught, part-time engine-turner.

Though the look is not new or imaginative, it is a generic, Breguet-inspired look that is common, and still attractive. Given his dedication to the craft, I can only expect that Josh’s upcoming watch will be substantially better in all aspects. 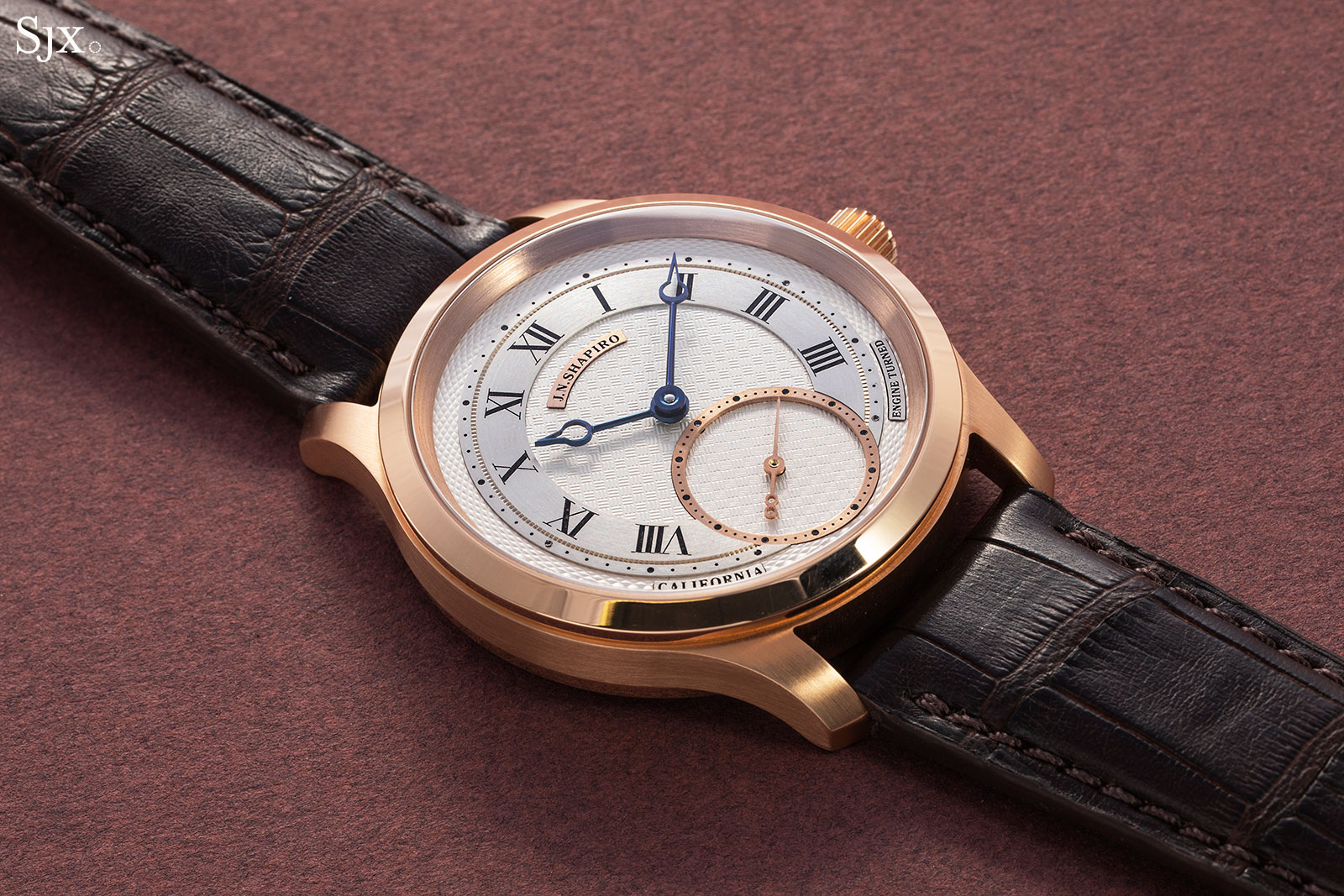