Though extremely rare, the George Daniels Anniversary Watch is a familiar timepiece because it has been widely covered and is arguably the signature George Daniels wristwatch. Though the Daniels Millennium was made in larger numbers, it was powered by a modified Omega (and by extension, ETA) movement. 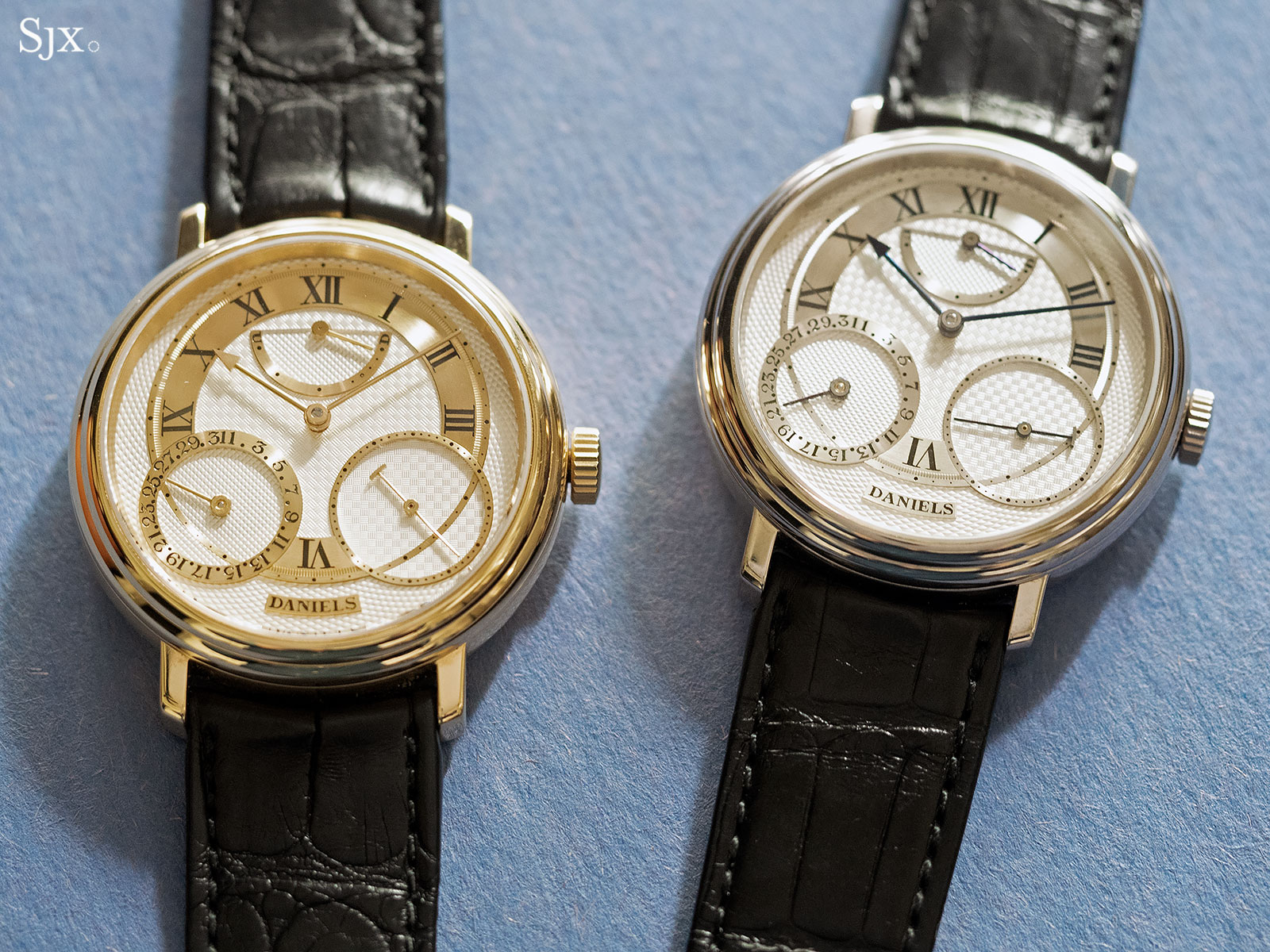 The quintessential Daniels Anniversary is in yellow gold, of which 35 were made. But when first launched in 2009, the Anniversary series was also meant to encompass four box sets of four watches each, made up of one watch in each colour of gold and another in platinum.

The sets were never produced, however, individual watches originally destined to be part of the sets were. Owned by a noted collector who acquired it direct from the George Daniels trust, this Anniversary in white gold is one of them. And it is the only Anniversary ever made in white gold so far. 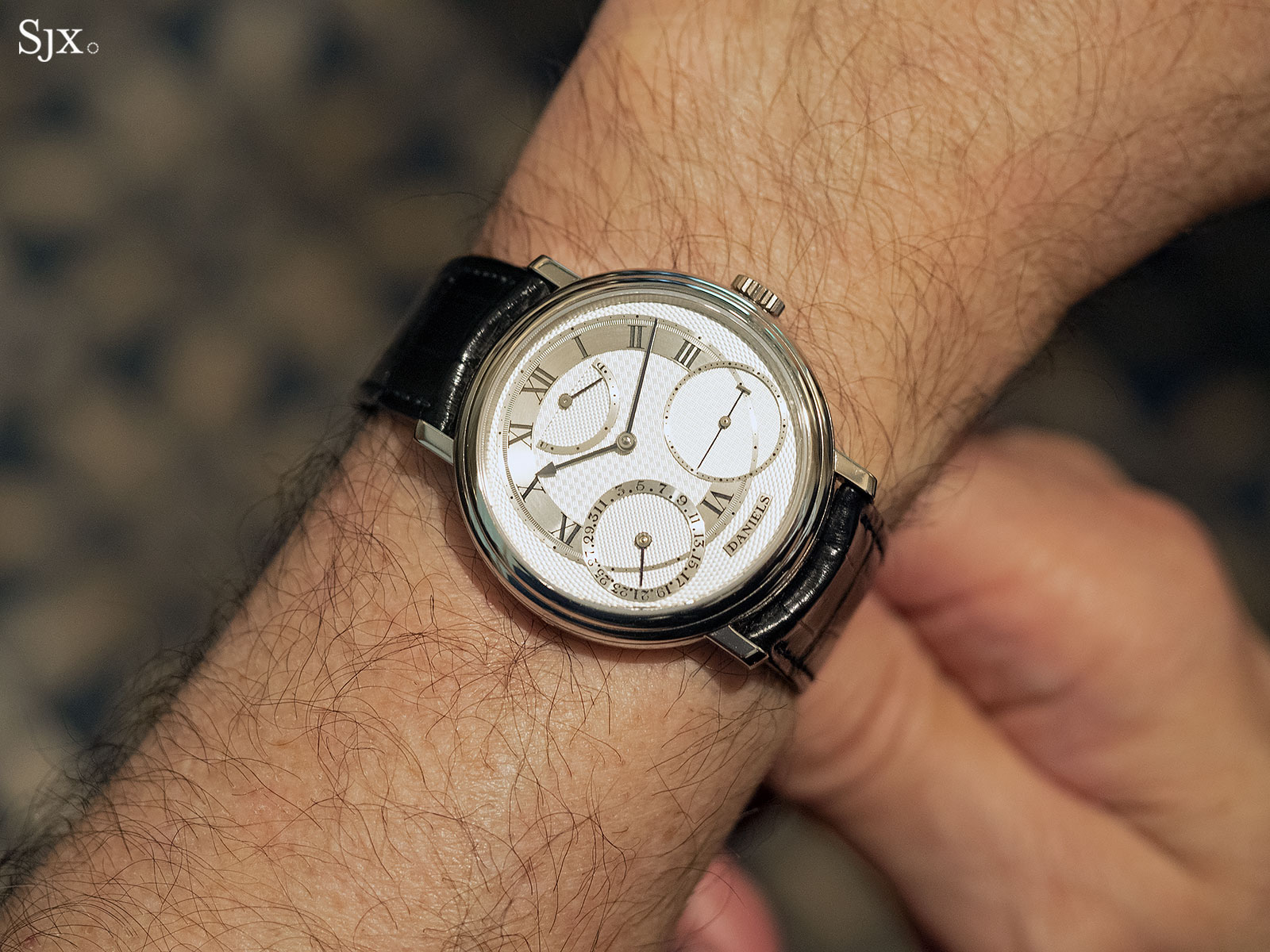 On the wrist of the owner 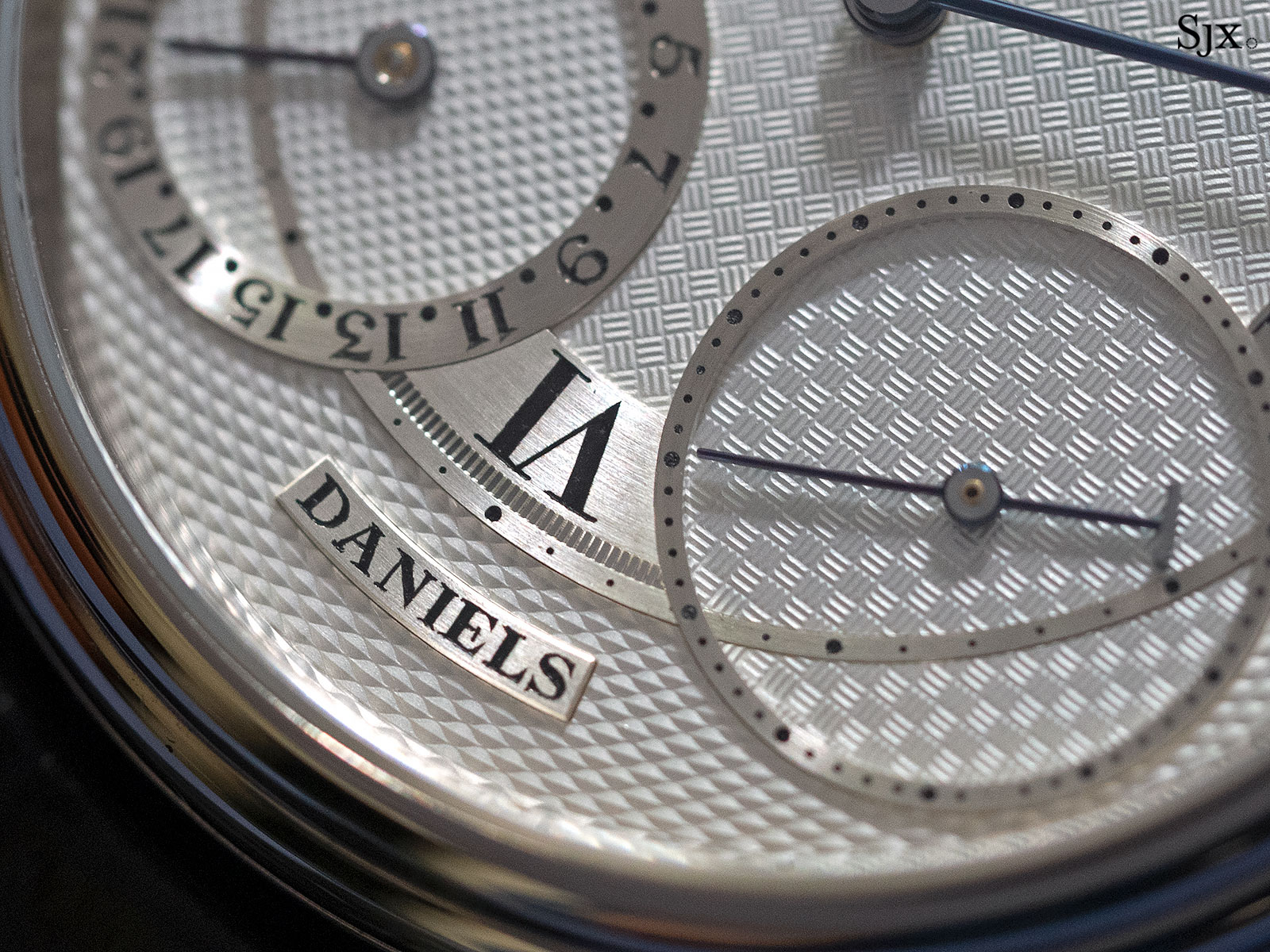 Though identical in design to the yellow gold Anniversary, the white gold watch looks more contemporary by virtue of its colour. The silver dial and blued steel hands give it a cleaner and more subdued appearance, compared to the gilded richness of the yellow gold model. 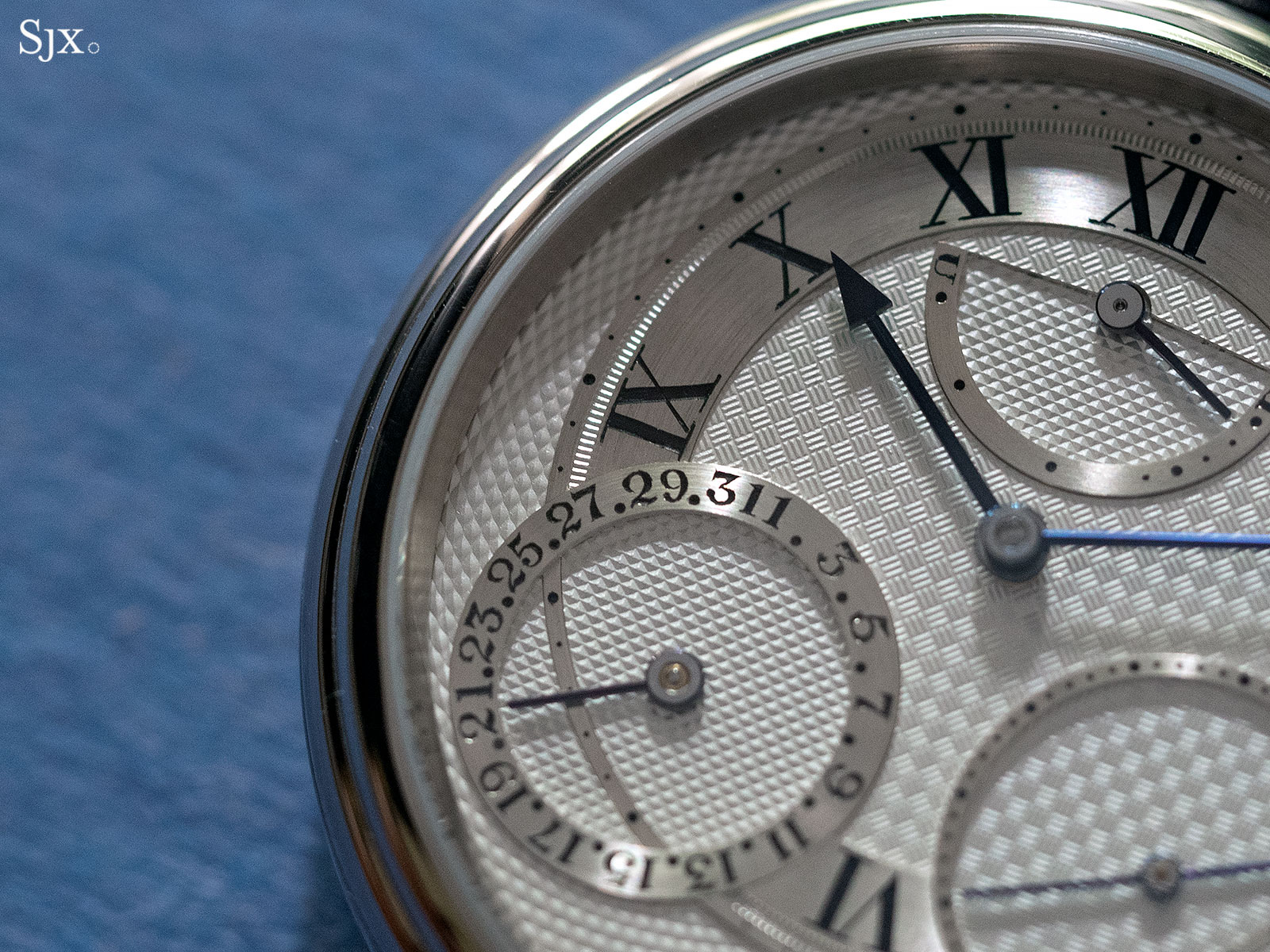 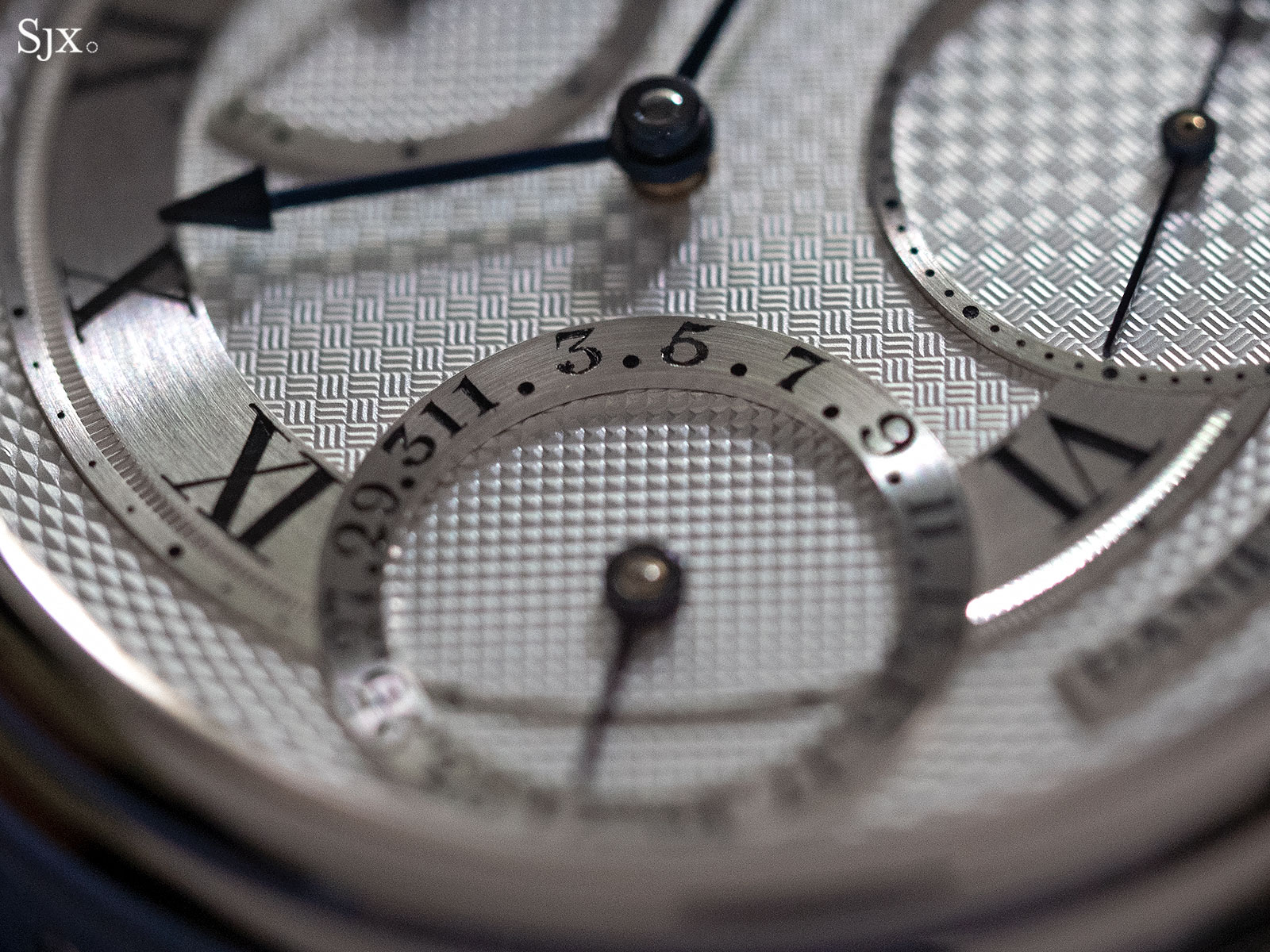 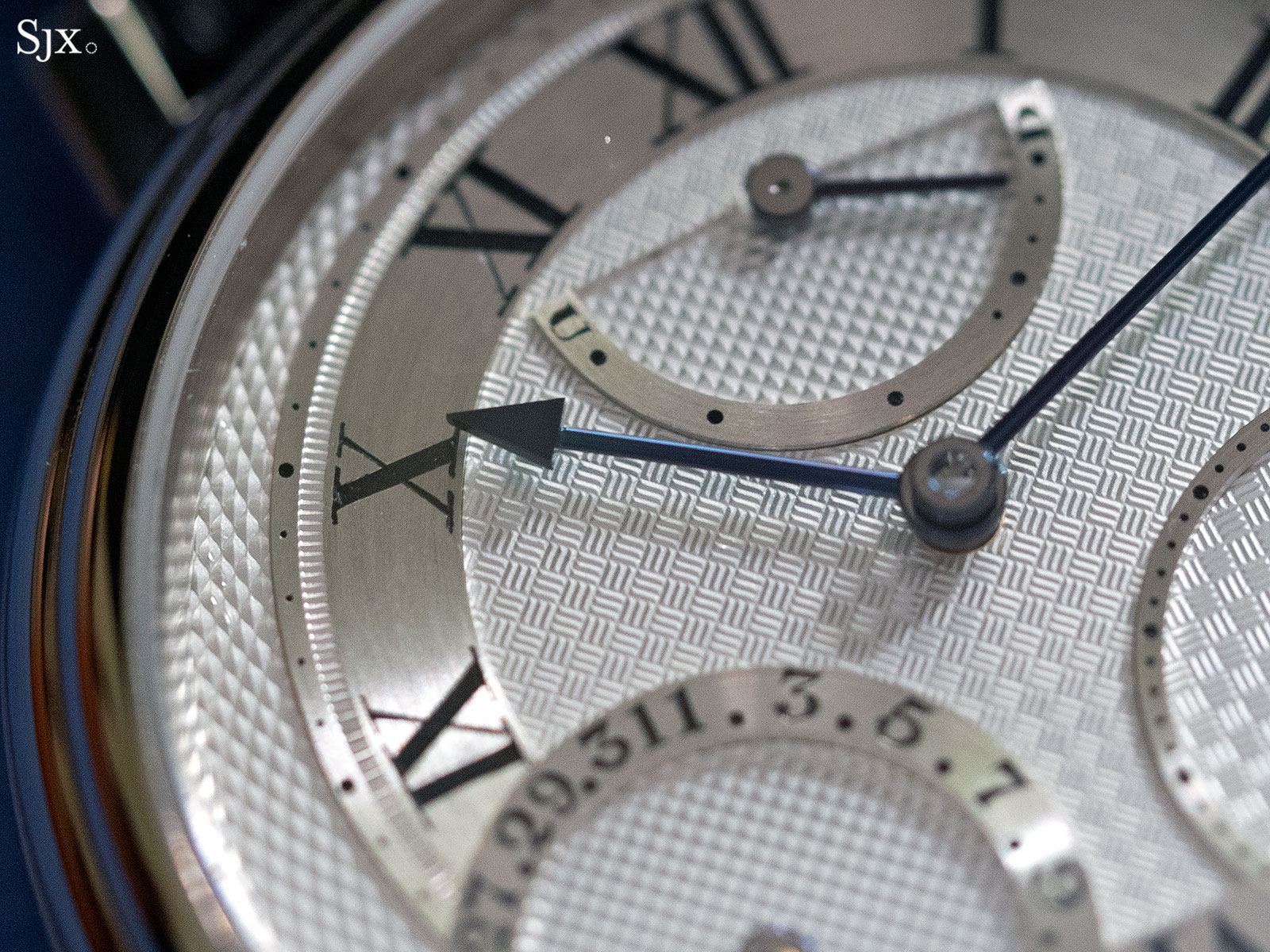 Besides the obvious differences on the front, the white gold watch is also distinguished from the standard yellow gold model with more subtle details on the movement.

The more obvious one is the lack of a serial number. While the yellow gold watches are numbered on the barrel bridge – with the number engraved in between the two large blued steel screws – the white gold watch has nothing there. 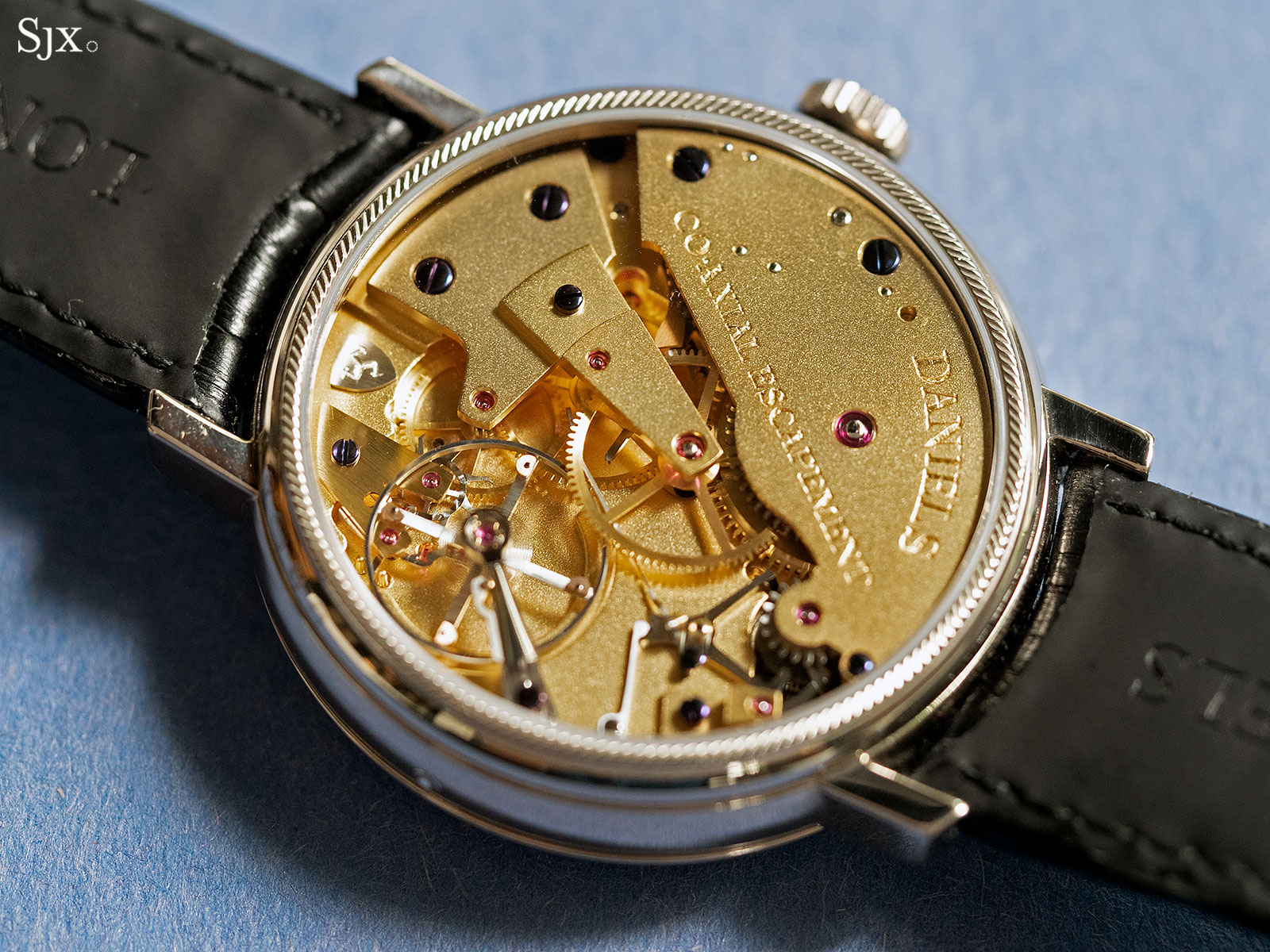 More discreet is the emblem of the Isle of Man – where Daniels was based, and now home to Roger – which is a triskelion made up of three legs. It’s engraved by hand on a tiny gold shield installed on the base plate of the movement. 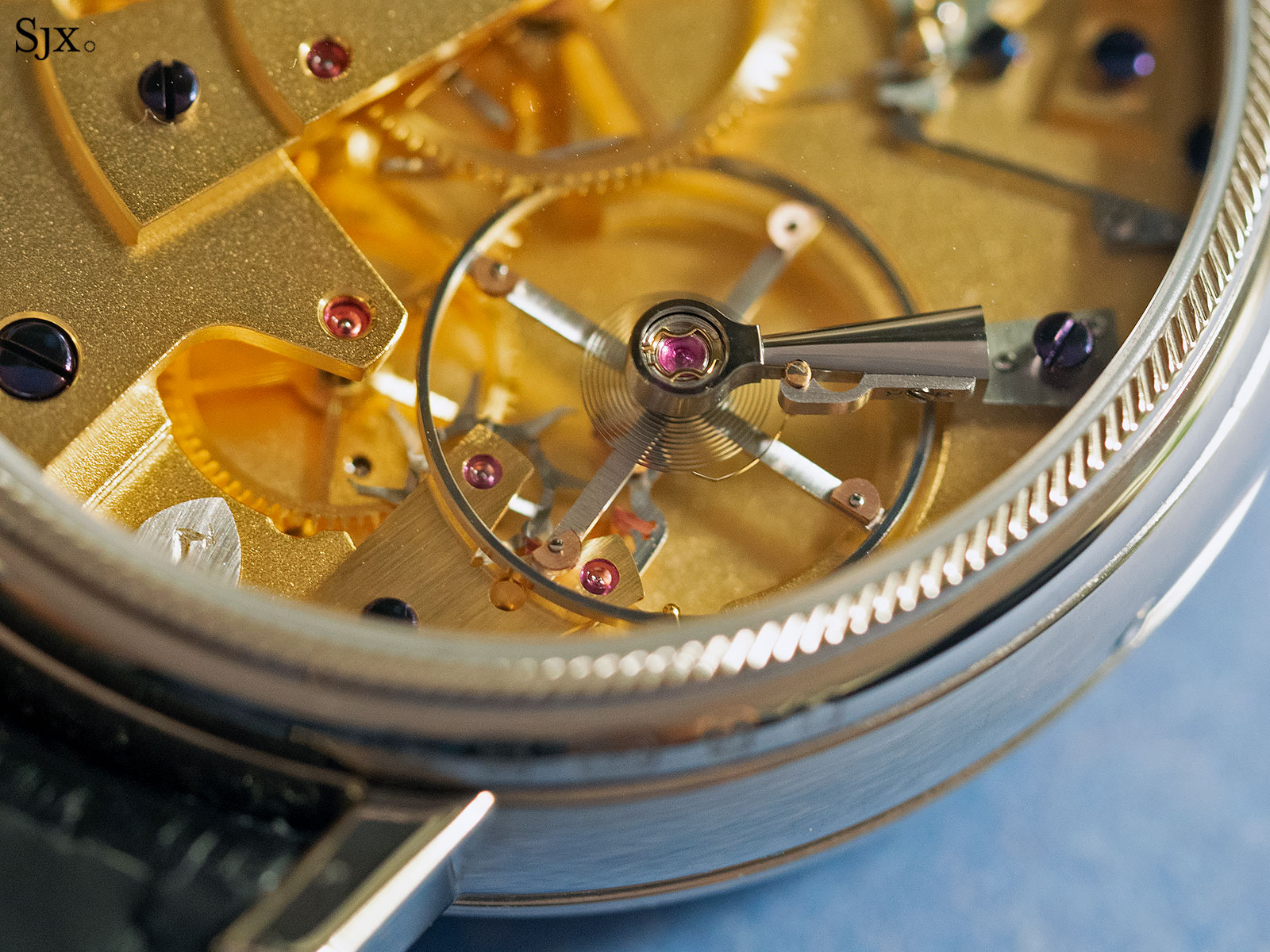 On the yellow gold model, the shield is yellow gold, and thus the same colour as the base plate. But here it is white gold, turning it into a tiny element that nonetheless stands out. 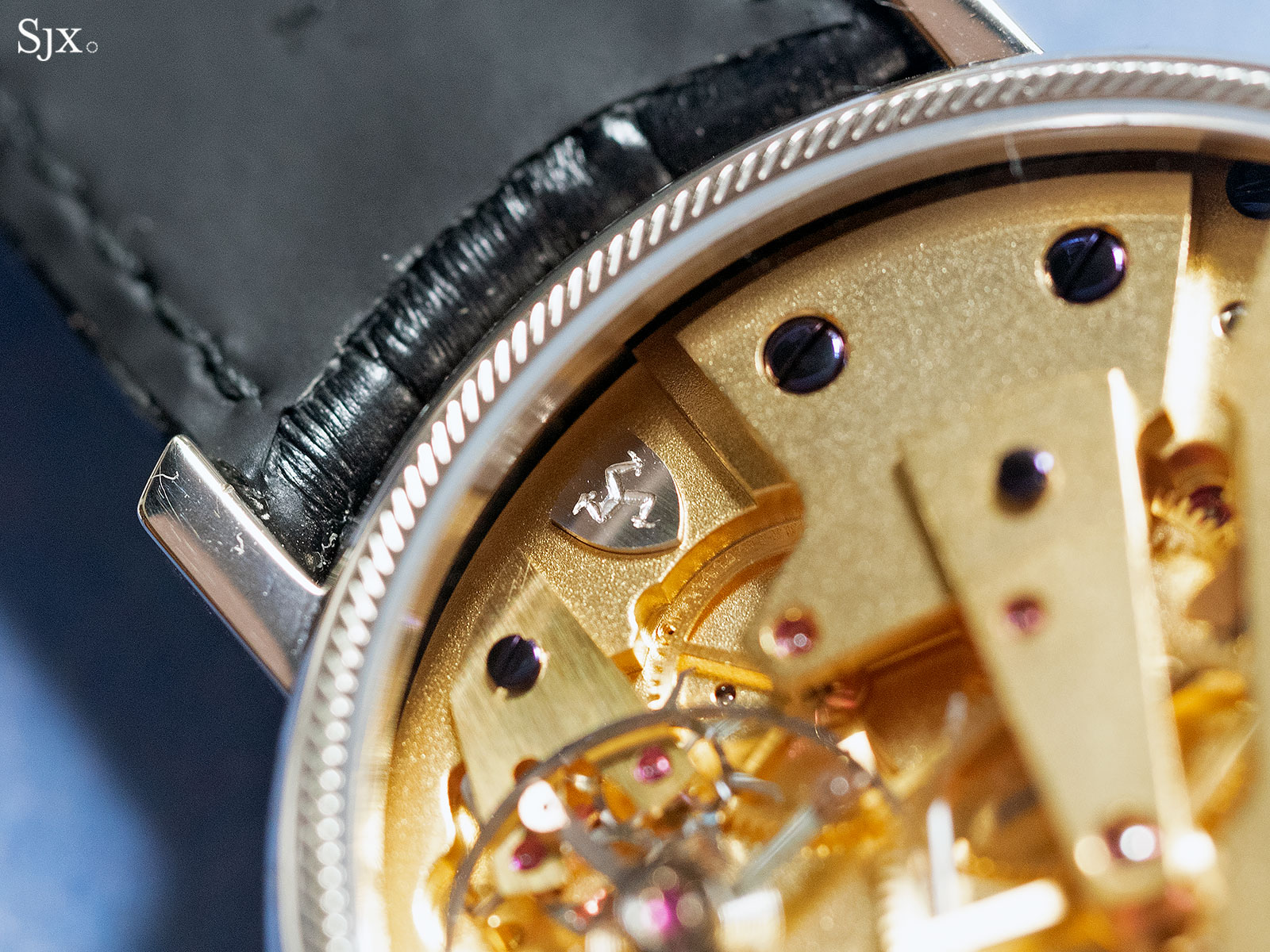 The triskelion in white gold

It is the only white gold Daniels Anniversary made to date, according to Caroline Smith, Roger Smith’s wife. However, she adds “we do reserve the right to produce the remaining three with the same specification”, to make up the original number planned for the sets. 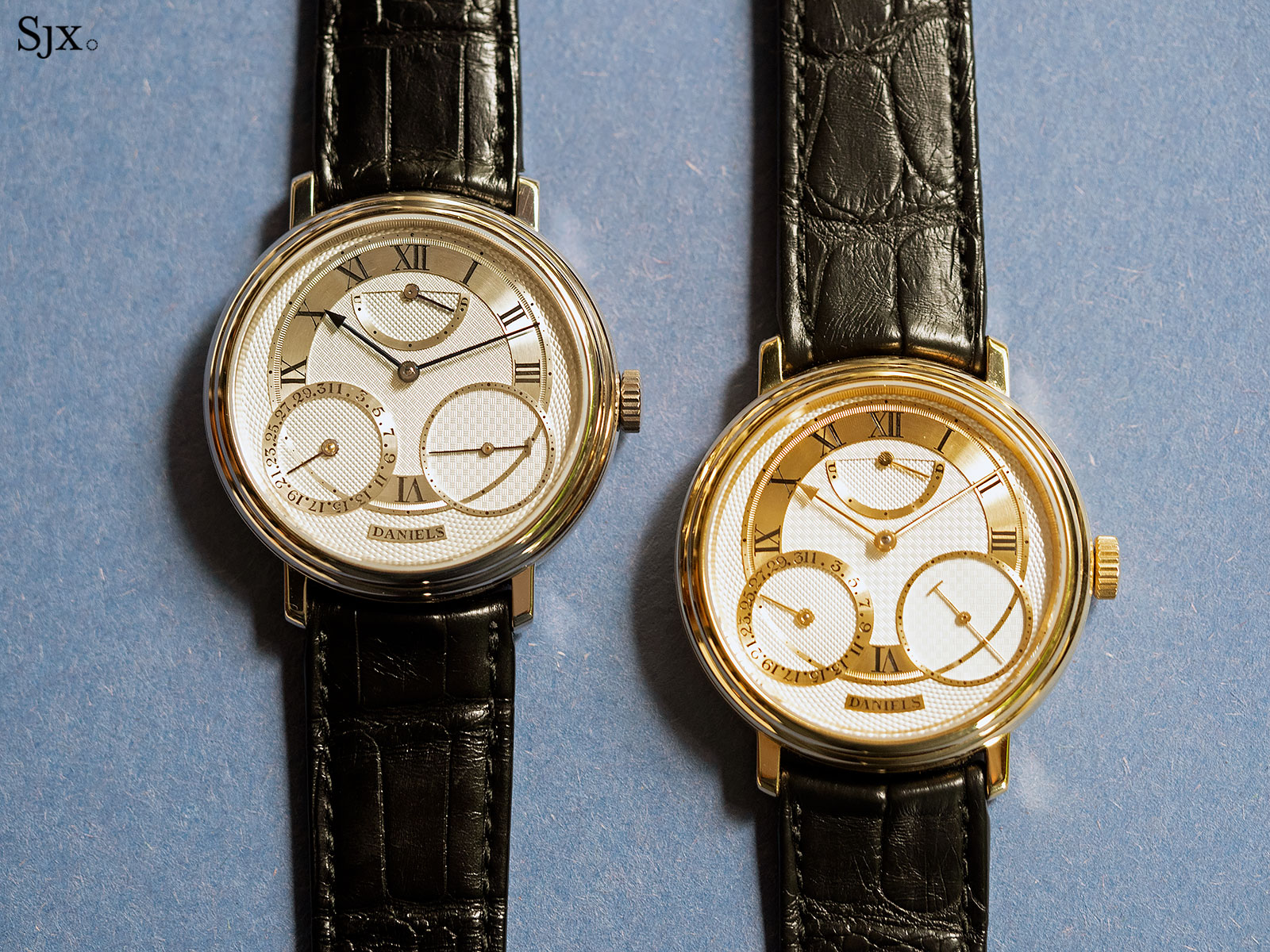 The English hallmarks on the case

But given Roger’s old-fashioned production methods and lengthy delivery times, it stands to reason that this will be the only white gold Anniversary for a long, long time.

Correction November 4, 2019: The Anniversary movement was derived from the calibre in the Roger W. Smith Series 2, and not the other way around.

The road not taken for Roger Smith.