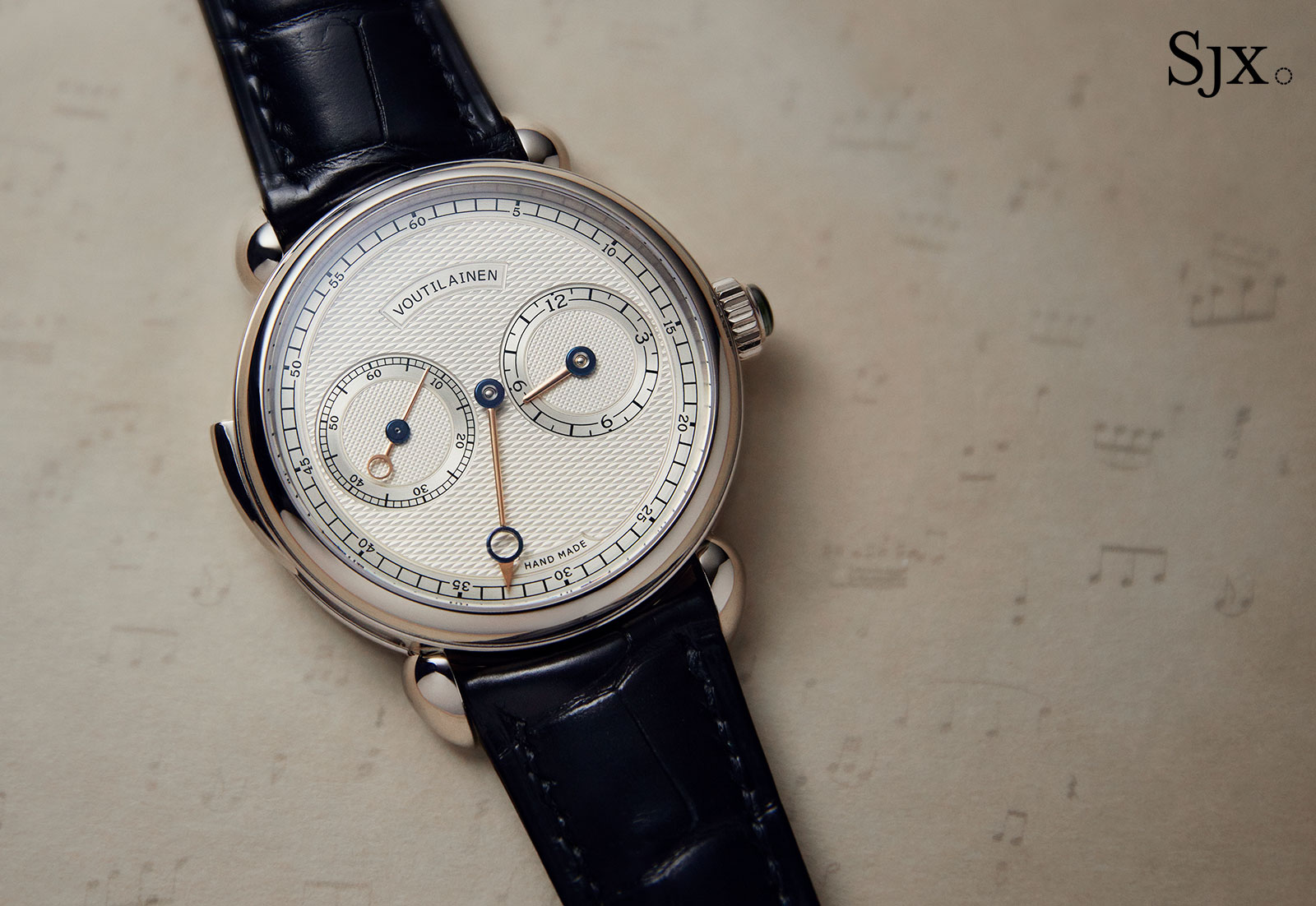 While Kari Voutilainen is best known for his time-only Vingt-8 (and the earlier Observatoire), he has produced complicated watches regularly, albeit sparingly, with examples including various tourbillons. His most regular complication has been the decimal repeater, having made perhaps a dozen over the years.

Built to strike hours, 10-minute segments and minutes, the decimal repeater is seen here in a regulator-dial configuration for the first time. Unlike most regulator dials that have a vertical layout, here the seconds are at nine o’clock, while the hours are at three. That’s presumably a consequence of the vintage ebauche inside being originally constructed for a Lépine pocket watch, which has the crown at 12 o’clock and subsidiary seconds at six. As is the norm for Voutilainen watches, the dial is solid silver and engine-turned by hand. While many recent Voutilainen dials have tended towards elaborate engine-turning and bright colours, this adopts a more restrained tone.

The main dial is covered with a barleycorn guilloche, while the sub-dials are finished with a hobnail motif. The dial itself is monochromatic, silver with black markings, but the hands are a combination of blued steel and rose gold, which makes for excellent legibility, though the unsparingly whiteness of the dial leaves it feeling incomplete next to the hands. Like Voutilainen’s other decimal minute repeaters, this is powered by a rebuilt and lavishly decorated vintage ebauche, or movement blank. While several of the earlier repeaters, including the Masterpiece 7, were powered by LeCoultre ebauches, this regulator repeater relies on a movement by Louis Elisée Piguet, a maker of highly complicated movements, whose grandson was Frederic Piguet. The bridges and base plate are maillechort, or nickel silver, and rhodium-plated, explaining the bright silvery-white finish. All of the wheels, for both the going and striking train, are 18k rose gold. Being a over a century-old, the movement runs at a slow 18,000 beats per hour, and has a shortish 32-hour power reserve. The original movement was constructed with a conventional time display, requiring Voutilainen to modify the calibre for the regulator-style dial.

Another Voutilainen improvement is the silent governor equipped with 18k rose gold weights. The free-sprung, adjustable mass balance wheel is also proprietary, with inset 18k gold and titanium masses. And like many Voutilainen movements, it is held in place by a rounded steel cock. Together the various touches put in by Voutilainen give the movement a modern look, though the construction and bridge shapes are distinctly 19th century. The governor at right The case is 18k white gold typical Voutilainen in style, with teardrop lugs and a 38mm diameter. blue sapphire on the crown adds a bit of a flourish.

Though the case is small by modern standards, the movement still fits well (and in fact could be in an even smaller case), illustrating the remarkably fine and compact dimensions of the original ebauche. The Regulator Dial Decimal Repeater is a unique piece priced at S$425,900, or about US$325,000. It was commissioned by Singapore retailer The Hour Glass, and has already been sold.