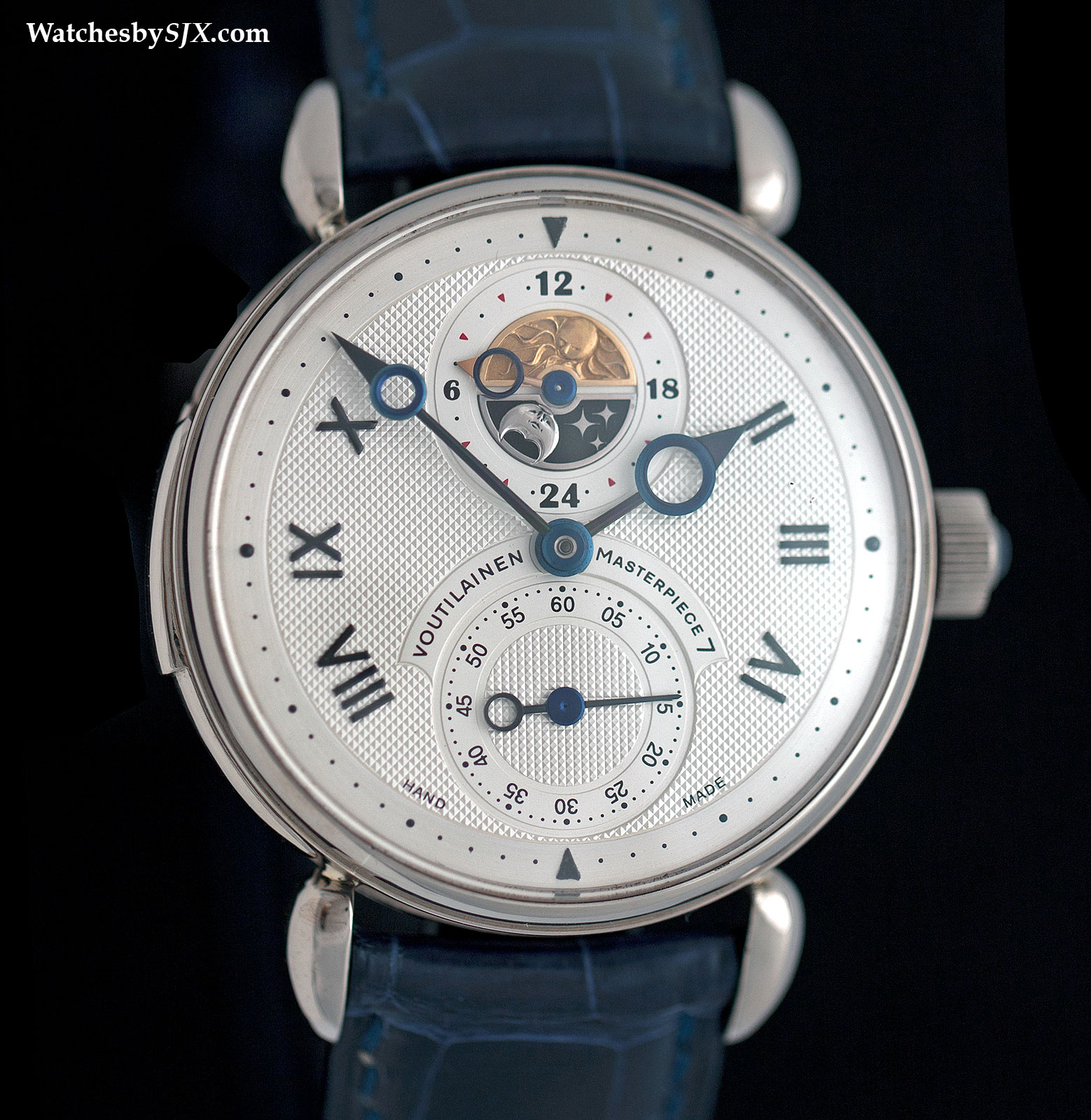 Completed just under 10 years ago, the Masterpiece 7 was one of Kari Voutilainen‘s early works, dating from the same period as the Observatoire, arguably the watch that made him famous. Like the Observatoire and most of his other watches made then, the Masterpiece 7 started life as a movement blank, or ebauche, made by LeCoultre about a century ago. Voutilainen made the components to finish the movement, converting it into a decimal repeater, added a second time zone feature, and decorated it to a exemplary standard.

Though Voutilainen watches are predominantly equipped with in-house movements now (like the Vingt-8 and tourbillon), his first generation timepieces all started out as top quality ebauches from the likes of LeCoultre and Louis Audemars. Consequently, those watches, just like this Masterpiece 7, have movements constructed in the unmistakeable style of decades ago. The two jewels secured by chatons and screws are especially revealing of the vintage origin of the movement.  [Ed’s note: This watch was worn regularly by its owner since it was made, and obvious wear and tear is visible in the pictures.] But they started out as movement blanks, lacking the balance wheel, escapement and assorted other parts. In order to complete the Masterpiece 7 (and any of the other ebauches used), Voutilainen had to make at least several dozen parts. But he did not just merely complete the Masterpiece 7 by finishing it, instead turned it into a decimal repeater. While typical minute repeaters chime the hours, quarters and minutes, a decimal repeater is more intuitive. It strikings the hours, 10-minute segments and then the minutes, making it easier to count out the time. Another function added to the movement is the second time zone display at 12 o’clock, advanced in one hour increments by pressing the crown.

Also notable is the balance wheel, which was made by Voutilainen. It is free-sprung with large, adjustable gold weights on its rim. The decoration of the escape wheel bridge below the balance wheel is particularly impressive. The movement finishing is gorgeous, with an artisanal touch that is less obvious in Voutilainen’s current timepieces that appear more mechanically perfect. Equally beautiful is the dial, which is a 18-ct. gold disc with hand-turned guilloche. The numerals are all blued steel, while the second time zone display is made of engraved rose and white gold. The hands are worthy of special mention, being comprised of two parts, the main part of the hand made of solid gold coated black, and an additional, bevelled ring made of blued steel pressed in to form the Breguet-style hand. The case is white gold with a hinged back decorated with a relief engraving done by Eddy Jaquet, a Swiss engraver that Voutilainen still works with. It depicts the Pleiades, the seven daughters of the titan Atlas from Greek mythology. Here’s a clip of the decimal repeater in action.