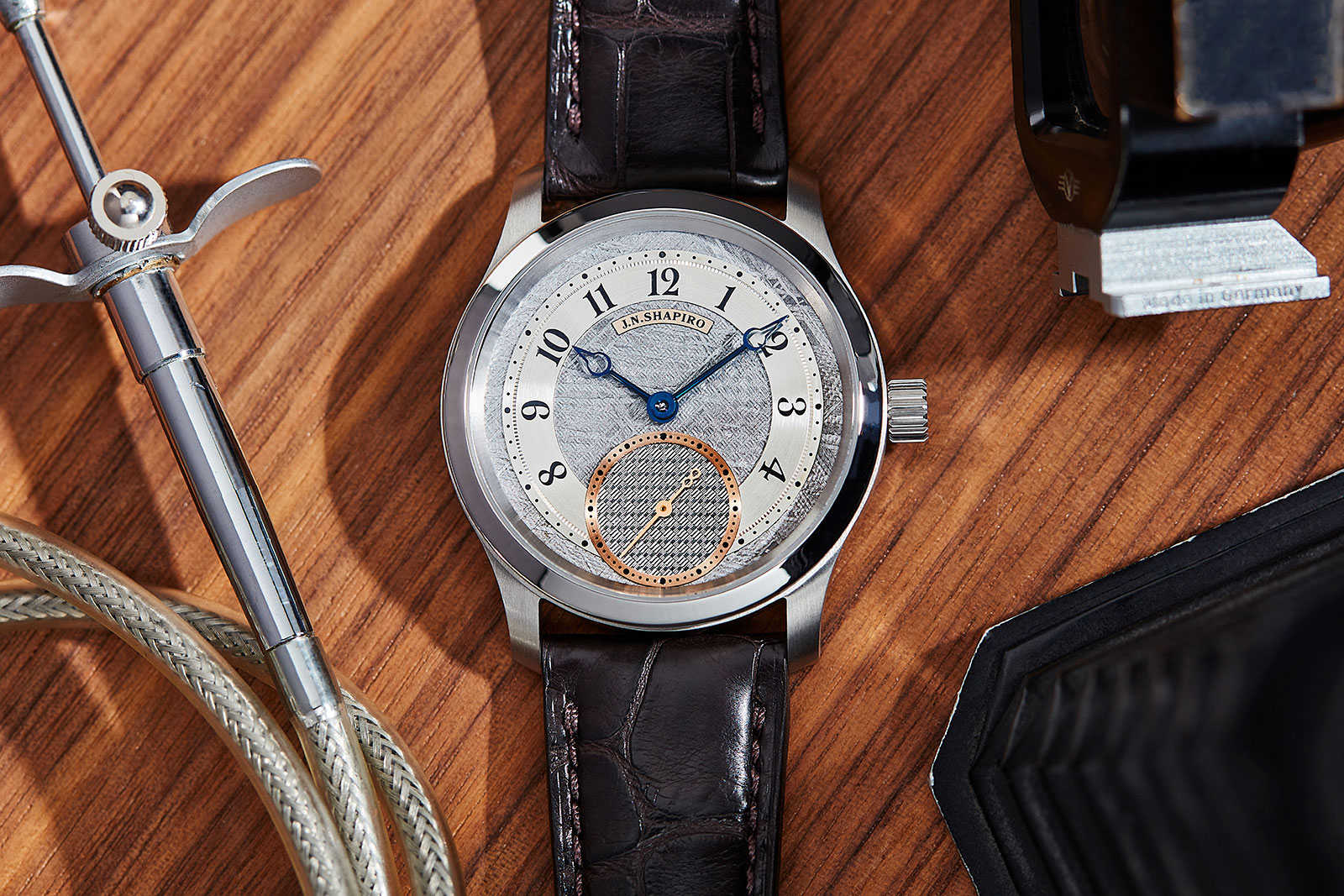 An educator turned guilloche specialist, Joshua Shapiro launched his namesake brand, J.N. Shapiro, in 2018 with the Infinity Series. a classically-styled wristwatch with a hand-made guilloche dial featuring a nested engine-turned pattern of his own invention.

His latest creation is the Infinity Series P.01, a collaboration with Collective, an American watch-collector club. Though it looks similar to the standard Infinity Series at first glance, the P.01 most definitely isn’t. While it does have a guilloche dial, the dial material is not the usual silver and gold, but meteorite – a first in watchmaking. Two things stand set the P.01 apart from Mr Shapiro’s work so far. The first is tangibly impressive – an engine-turned meteorite dial, a significant accomplishment in terms of craft and skill. The result is a striking surface that overlays the natural and random Widmanstätten pattern of the meteorite with Mr Shapiro’s sharply-executed engine turning, which sounds confusing but appears to be a pleasing mix of order and chaos.

But perhaps more important for J.N. Shapiro as a brand is the brand-new serif typeface for the Arabic hour numerals. Designed with the help of an artist, the numerals give the watch a style that’s distinct – and more 20th century contemporary – compared to the typical J.N. Shapiro watch that features Roman numerals and a Breguet-inspired aesthetic.

And the P.01 starts at US$21,500 in steel, which is not that much more than the standard Infinity Series with a silver dial, making it an eminently reasonable proposition.

The P.01 does come with one caveat: it was developed in collaboration with Collective, a private club of watch enthusiasts, and is only available to club members. That said, a representative of Collective has anyone can apply to be a member, and importantly, the watch is being sold by Mr Shapiro himself, rather than through a middleman. 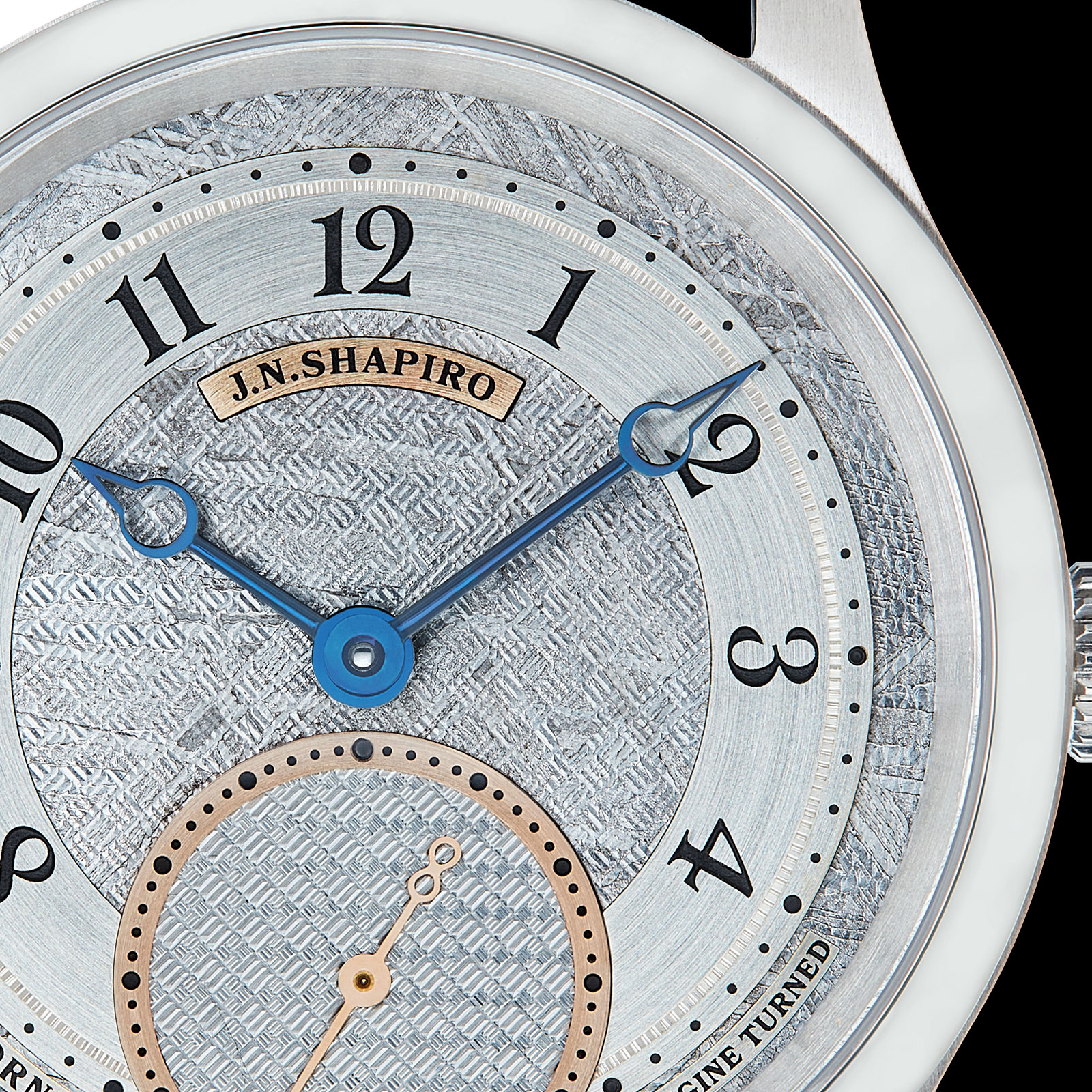 Though meteorites sound like stones from space, not all of them are. A minority of them are iron meteorites, made up of both rock and an nickel-iron alloy. The crystalline structure of the nickel-iron mix within is what gives iron meteorites the characteristic, streaky Widmanstätten pattern – made vivid after slicing, polishing and etching – that makes them prized material for decoration. 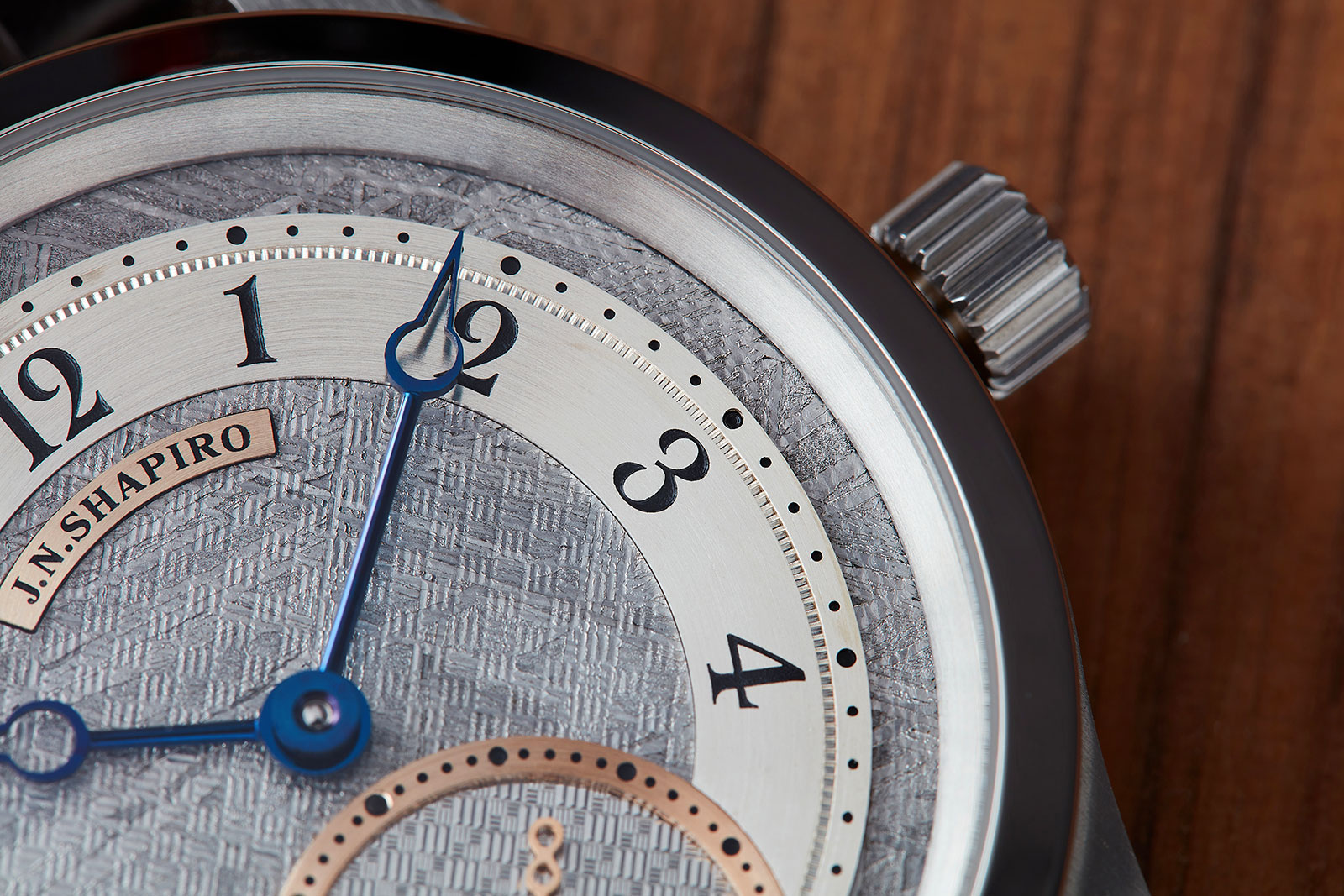 “Meteorite is both exciting and challenging at the same time… exciting because most metals I engrave on have a uniform grain structure,” responded Mr Shapiro when I reached him by email, “With meteorite you are never quite sure what you are going to get when you engrave. Some of the challenges are when selecting a piece of meteorite to avoid slices with large cracks or actual rock embedded in the meteorite.”

“I use Gibeon meteorite which is made up of iron and nickel,” he continued, referring to the meteorite that landed in modern-day Namibia millions of years ago, “The Iron engraves very smoothly but the nickel can be quite hard and come and unexpected moments. Rock will not engrave at all and must be completely absent.”

While the material is a first, the decoration is in traditional J.N. Shapiro style – engine turned with a basketweave guilloche and fitted with a silver chapter ring for the numerals. But the numerals are unique – literally – rendered in a new typeface designed by Lee Yuen-Rapati, an artist based in London, in collaboration with Mr Shapiro and a client of his. The hour numerals are engraved and then filled with black lacquer

And the sub-dial for the seconds is finished with the Infinity Weave, Mr Shapiro’s patent-pending guilloche that’s a nested basketweave.

It might appear to be silver at first glance, but the sub-dial is in fact meteorite. Unlike the main section of the dial, the meteorite sub-dial has not been etched with acid. A chemical process that removes a microscopic, top layer of the meteorite, etching is done to highlight the natural grain of the Widmanstätten pattern. “I actually had to experiment with how much etching to get a visually pleasing balance of engine turning and meteorite in the main part of the dial,” continued Mr Shapiro, “Not enough etching and you cannot really see the  Widmanstätten patterns. Too much etching and the engineturning completely disappears. I decided to etch it enough where the meteorite is very obvious and you  need to look to see the engine turning.” 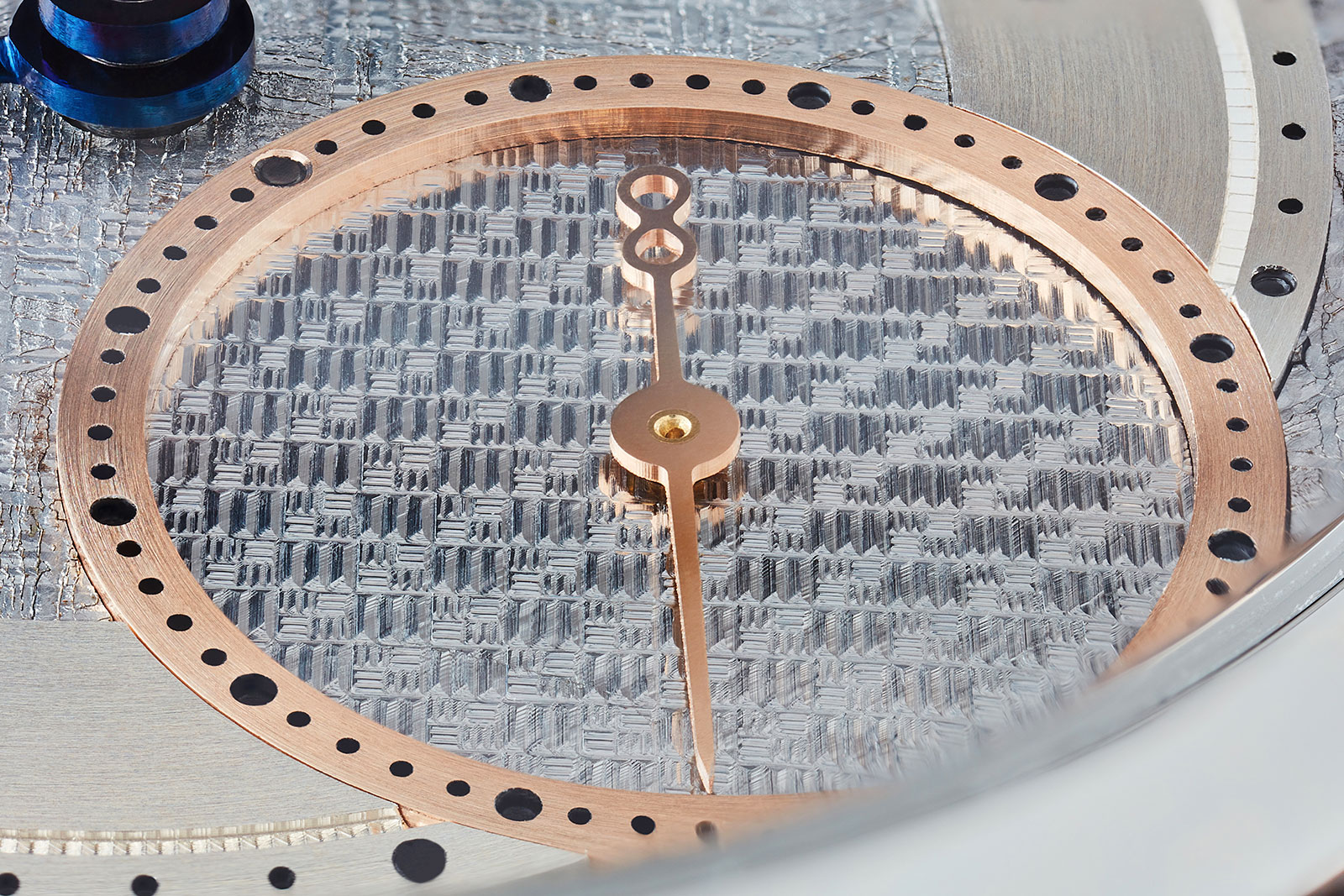 The Infinity Weave on the seconds

The case is the standard J.N. Shapiro case, which is 40 mm in diameter and a bit under 10 mm high. It’s available in steel, as well as 18k red or white gold.

The movement inside is supplied by Uhren Werke Dresden (UWD), the German movement specialist that’s a sister company of Lang & Heyne. It’s a large, hand-wound movement with open-worked bridges that reveal the going train. 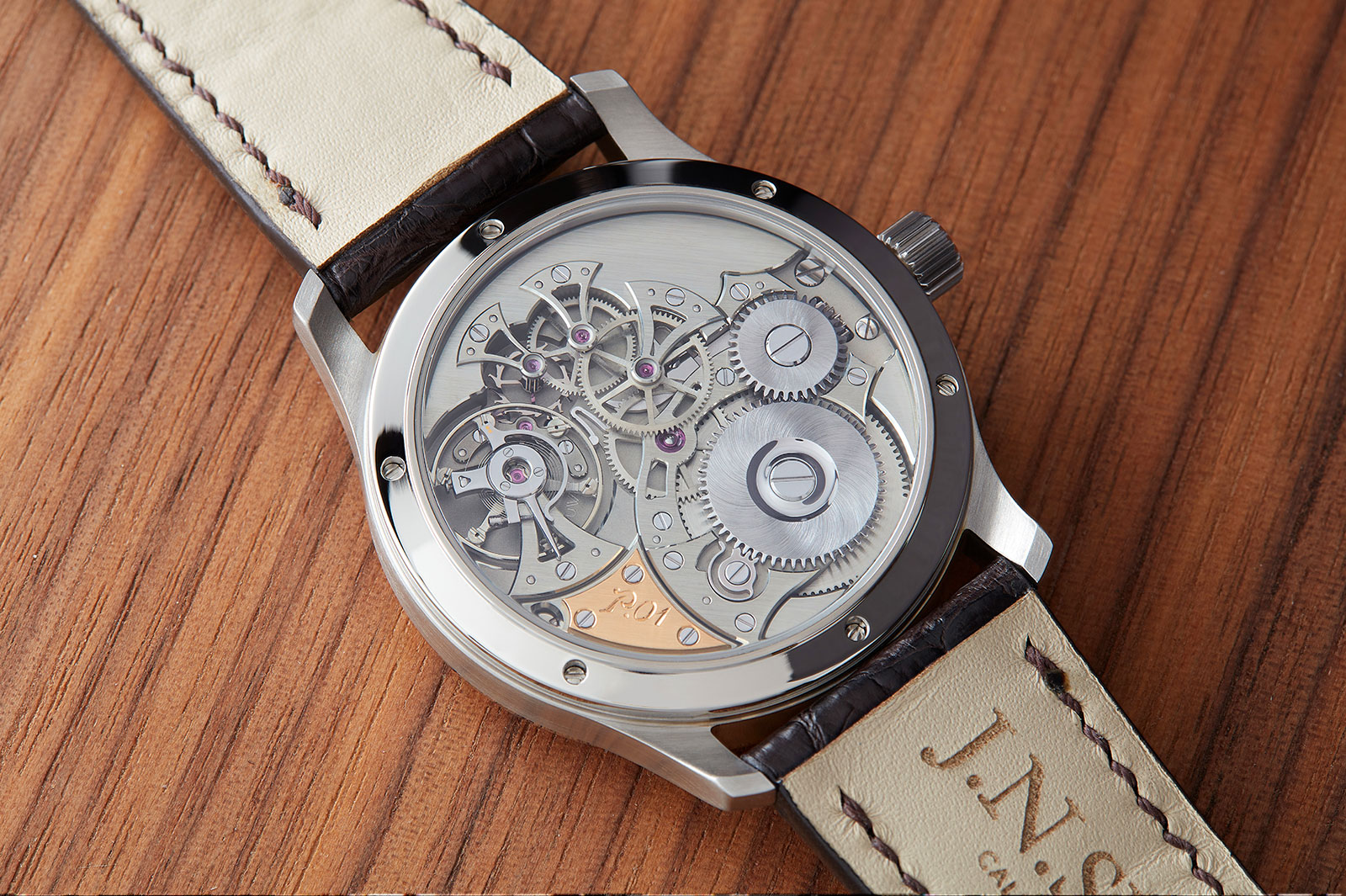 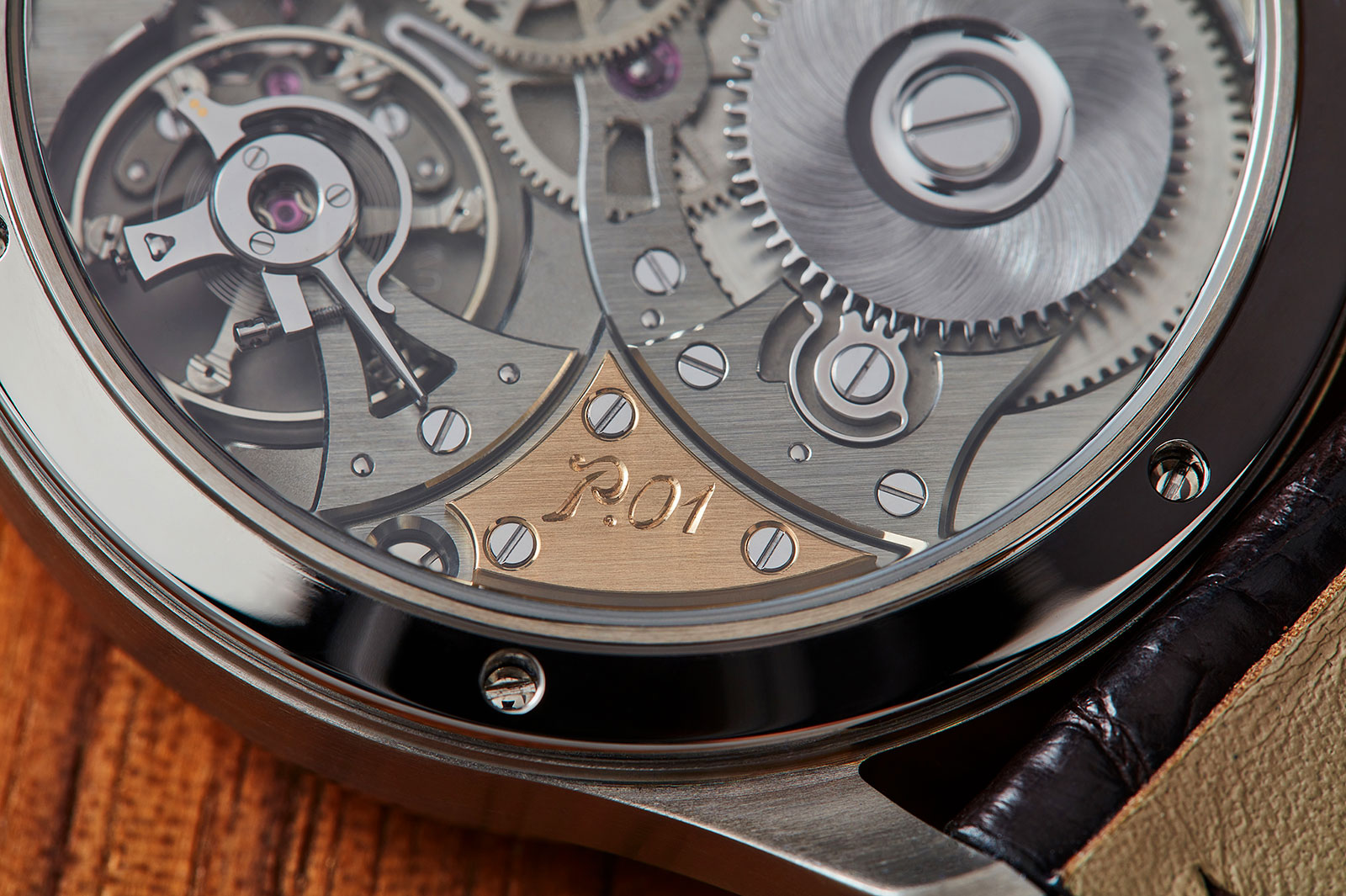 The P.01 was developed together with Collective, an private enthusiasts club. Set up in 2019 by a pair of Silicon Valley tech executives, Asher Rapkin and Gabe Reilly, Collective is made up of watch collectors around the world. Its purpose is organising events for its members, as well as collaborating with watch brands on club-specific editions, the first of which was the Zenith El Primero Chronomaster C.01.

The P.01 is available direct from J.N. Shapiro, but only to members of Collective. Though membership is by invitation only, those interested can indicate their interest via the club’s website.

Limited edition: 10 watches
Availability: Direct from J.N. Shapiro, but only to Collective members
Price: From US$21,500 in steel

Zenith marked the 50th Anniversary of the El Primero last year with several historical remakes, including the editions for Phillips auctioneers as well as the El Primero A386 Revival, a set of watches that were a near-exact reproduction of the original.

Now Zenith has debuted the final A386 remake – in steel like the original – with the Chronomaster Revival “Manufacture Edition” that’s equipped with a dial inspired by a long-forgotten prototype.

Handsome and striking with a well-proportioned case and dial, the watch is very much a typical El Primero A386. The star of the new remake is unquestionably the dial. Employing the same tri-colour palette that’s the A386 trademark, this replaces the traditional tri-colour with different shades of the same blue, ranging from a bright azure blue to a dark midnight navy.

For someone who loves the colour, this is appealing. The juxtaposition of the blue registers against the white dial promotes a stark and legible look.

And it’s also worth noting the watch is not a limited edition – a wise move to avoid having unlimited limited editions – though distribution will be limited to Zenith’s e-commerce store and the manufacture in Le Locle.

This particular dial design is modelled on a stash of prototype dials supposedly retrieved from the attic of Zenith’s manufacture in 2019. It was found amongst the El Primero tooling that was saved by Charles Vermot over four decades ago.

A longtime watchmaker at Zenith, Vermot is known as the man who saved the El Primero movement. In the depths of the Quartz Crisis in 1975, his employer – then owned by American television maker Zenith Electronics – made the decision to halt production of the El Primero. The plans, parts, and equipment were all to have been discarded.

A member of the original team that helped develop the movement, Vermot, quietly defied the order by secretly stowing away the plans and components for El Primero in the famous attic. The treasure trove that Vermot secreted away proved invaluable come 1982, when Rolex and Ebel were scouting around for an automatic chronograph movement. The rediscovered material and parts allowed production of the El Primero to swiftly restart just a year later.

Why the tri-colour blue dial was in Vermot’s stash is a mystery. No records of such a dial exist, though it was found along with other, known prototype dials for the A386, so it can be inferred the tri-colour blue was also a prototype. Regardless of its origins, the new dial is intriguing and handsome, which no doubt led its modern-day resurrection.

Dial aside, the Manufacture Edition is virtually identical to the vintage original. The case is the same compact 38 mm with wide lugs that feature an attractive radially-brushed finish on their top surfaces. And the movement inside is the El Primero 400, essentially unchanged from the 1969 movement.

Availability: Only at Zenith’s online store or the manufacture in Le Locle
Price: 8,900 Swiss francs; or 12,700 Singapore dollars The world’s most prestigious yacht race, the America’s Cup has been sponsored by a variety of watch brands, which was Panerai until the last instalment – and to confuse things even more, the competing teams each have their own watch sponsors. Having been a backer of defending champion Team New Zealand for the last two decades, Omega now back to being a sponsor of the entire event as official timekeeper for 36th America’s Cup that’ll take place in 2021 off the coast of Auckland in New Zealand.

Since the last time Omega was the official race timekeeper was in 2003, the brand is marking the occasion with the Seamaster Planet Ocean 36th America’s Cup, no doubt the first of several editions for the event. 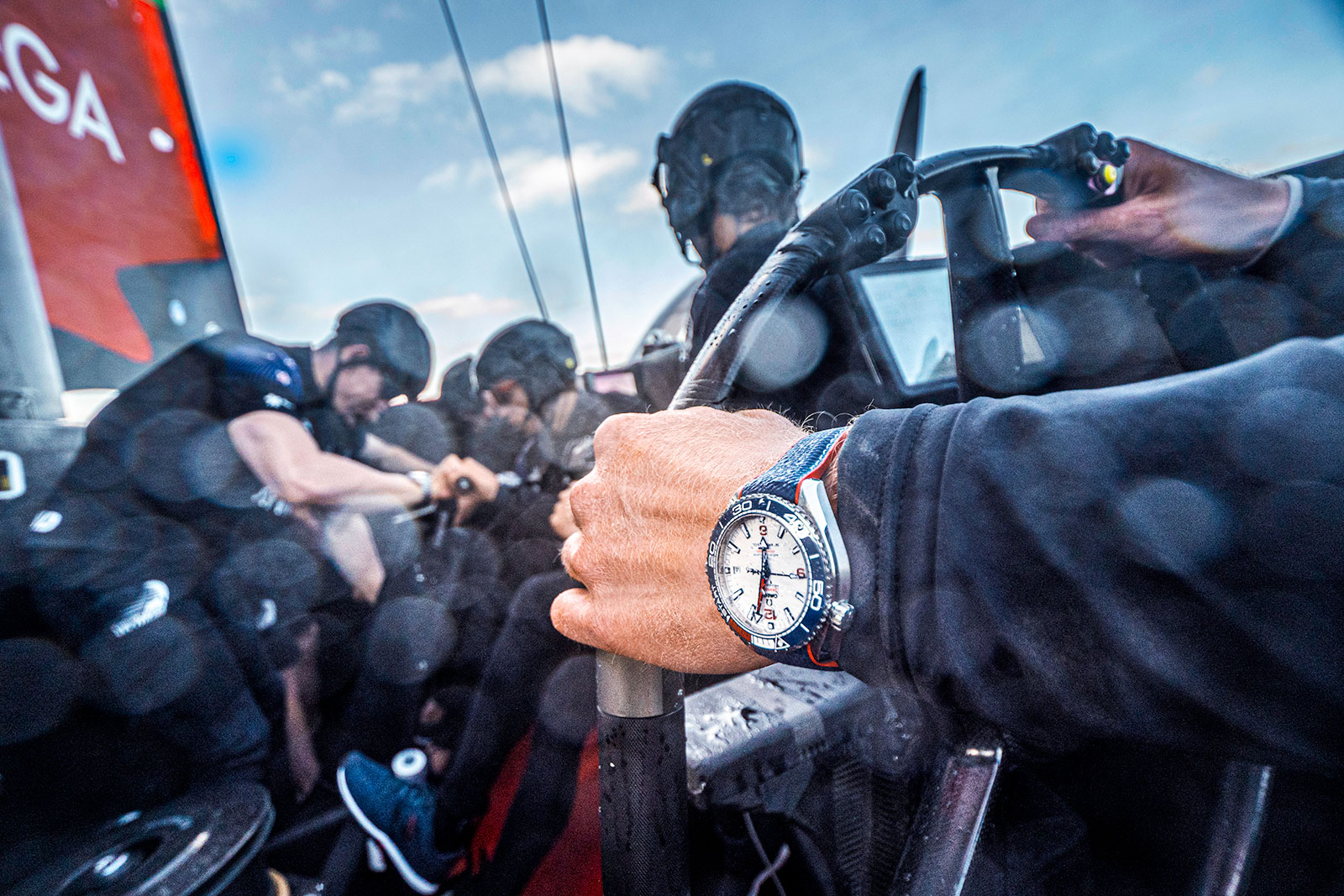 But the watch itself is a strong proposition. Omega watches usually offer good value for money, combining high-tech mechanical watchmaking and high-end materials, which is the case for the Planet Ocean line at large. Though the America’s Cup model is a limited edition, it costs only about 10% over the standard model. So if you want a Planet Ocean but want something a bit more special than the stock offering, this is a good choice.

The Planet Ocean 36th America’s Cup has the same 43.5 mm case as well as cal. 8900 movement as found in the standard model, but it’s dressed in a new combination of colours. The dial is glossy white ceramic, while the bezel insert is made of blue, white and red ceramic. 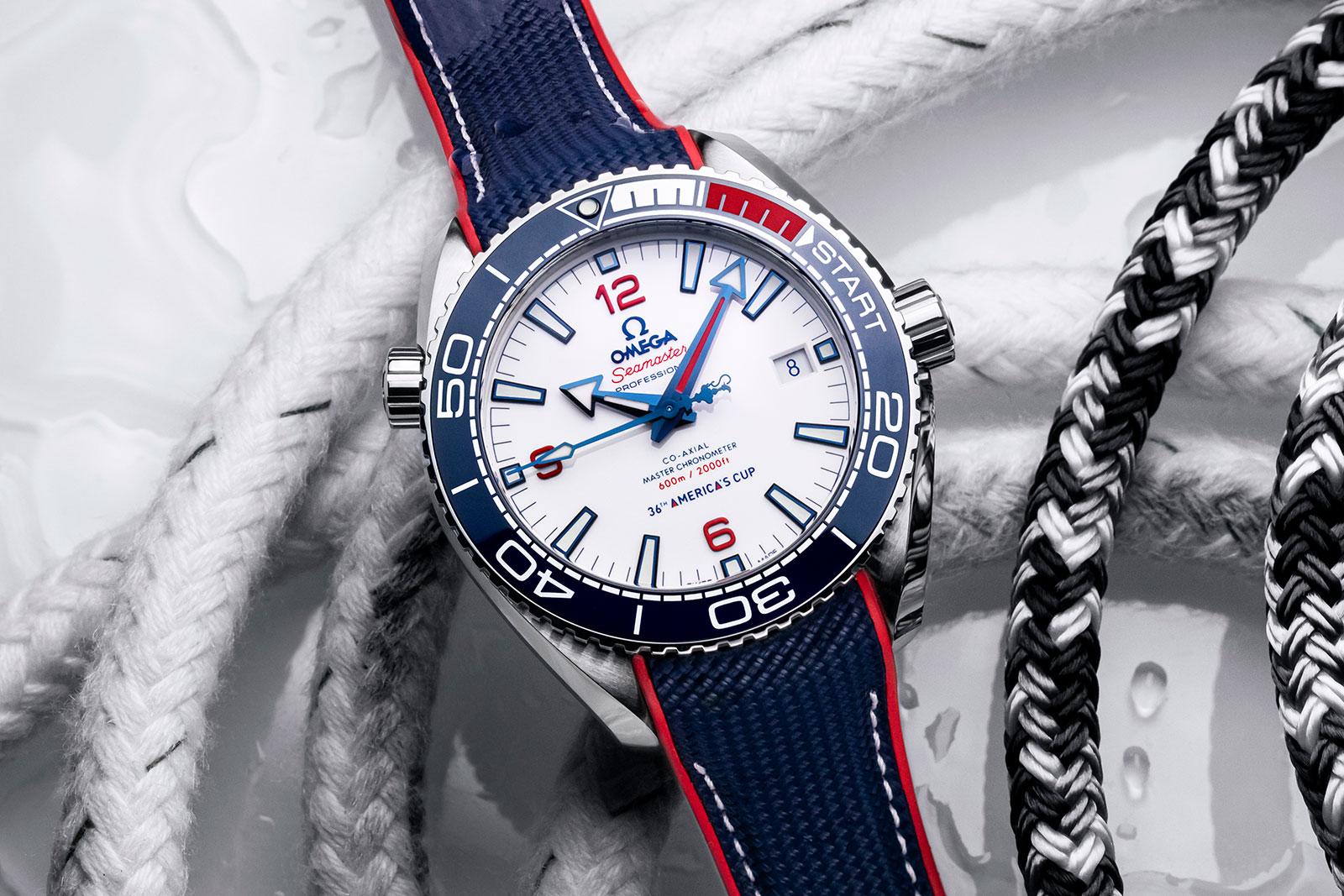 The watch also also incorporates several America’s Cup-specific details, including the 10-minute regatta countdown scale as well as the event name at six o’clock. More unusually, the counterweight of the seconds hand is shaped like the America’s Cup itself. And on the back, the 36th America’s Cup logo has been printed on the inner face of the sapphire back, which means the movement is only partially visible. The movement is the cal. 8900, one of the Omega’s top of the line automatics that’s a Master Chronometer certified by METAS, Switzerland’s meteorological agency. It’s also equipped with the lubrication-free Co-Axial escapement invented by the late English horology George Daniels. And its hairspring is silicon, while the escapement components are made of non-magnetic alloys, giving the movement an impressive magnetism resistance of over 15,000 Gauss.