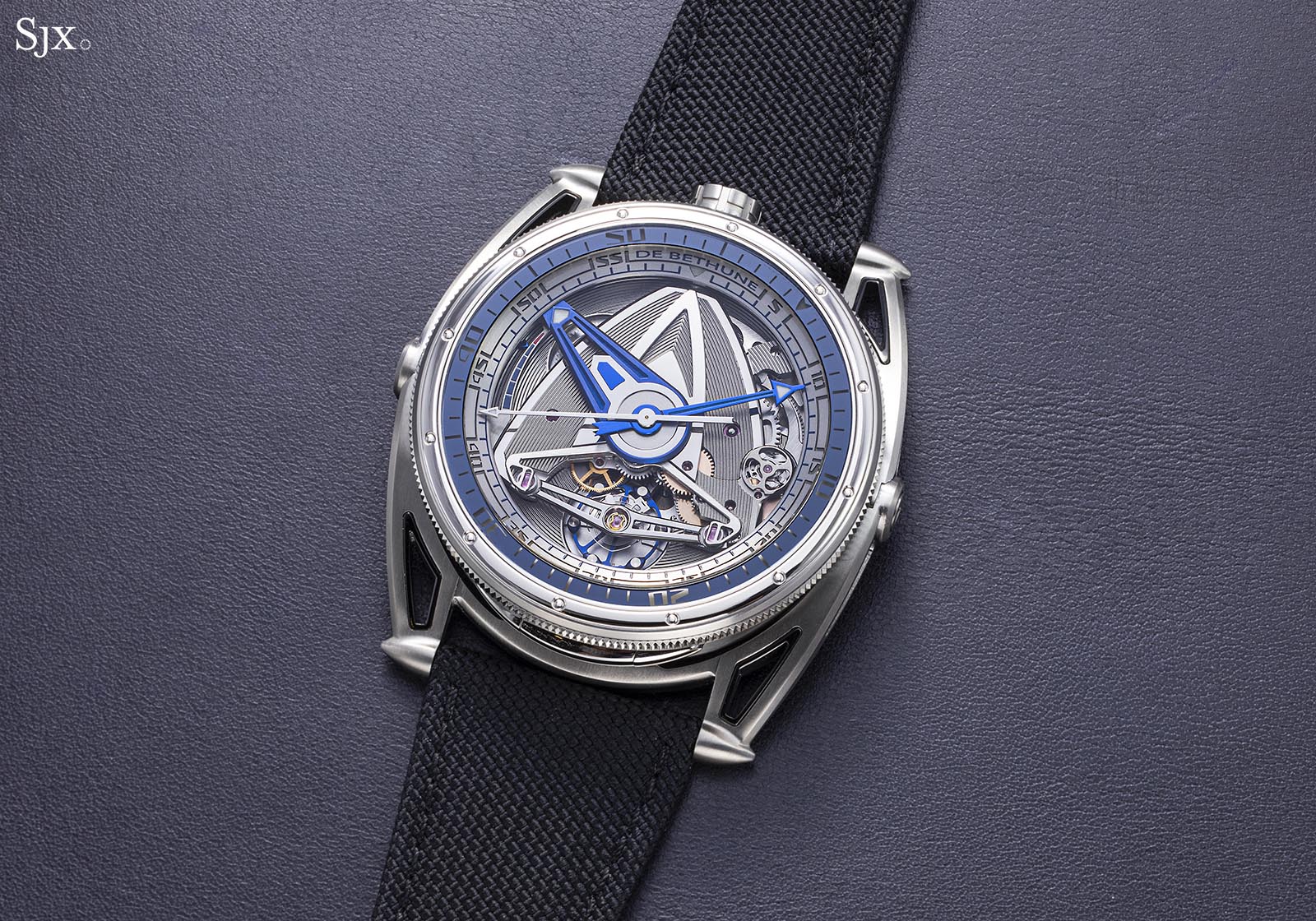 Like the bizarre-looking, ultra-deep sea creatures that produce bioluminescent light, De Bethune’s DB28GS Grand Bleu boasts its very own, self-contained light source – hardly surprising given what De Bethune is all about.

Since its inception in 2002, De Bethune has expanded its aesthetic and technical language, going from relatively classical, Breguet-inspired watches to timepieces that are at the cutting edge of modern horology. Most of its contemporary watches feature far-flung, otherworldly designs, a house style that no doubt made it challenging to ensure the Grand Bleu conforms to the ISO 6425 dive-watch specification. The resulting Grand Bleu is perhaps one of the most extravagant and extraordinary dive watches ever – this video shows the illumination in action.

Though De Bethune dabbled in oversized sports watches well over a decade ago, starting with the DB24 Super Sport of 2007, the Grand Bleu is evolved from the more recent DB28GS launched in 2015.

While the DB28GS was already a hardcore sports watch with a high-tech movement, the Grand Bleu takes it further -or mor eacccurately, deeper. It combines a brand-new case with a new movement equipped with a mechanical dynamo that powers a set of tiny LED lamps. 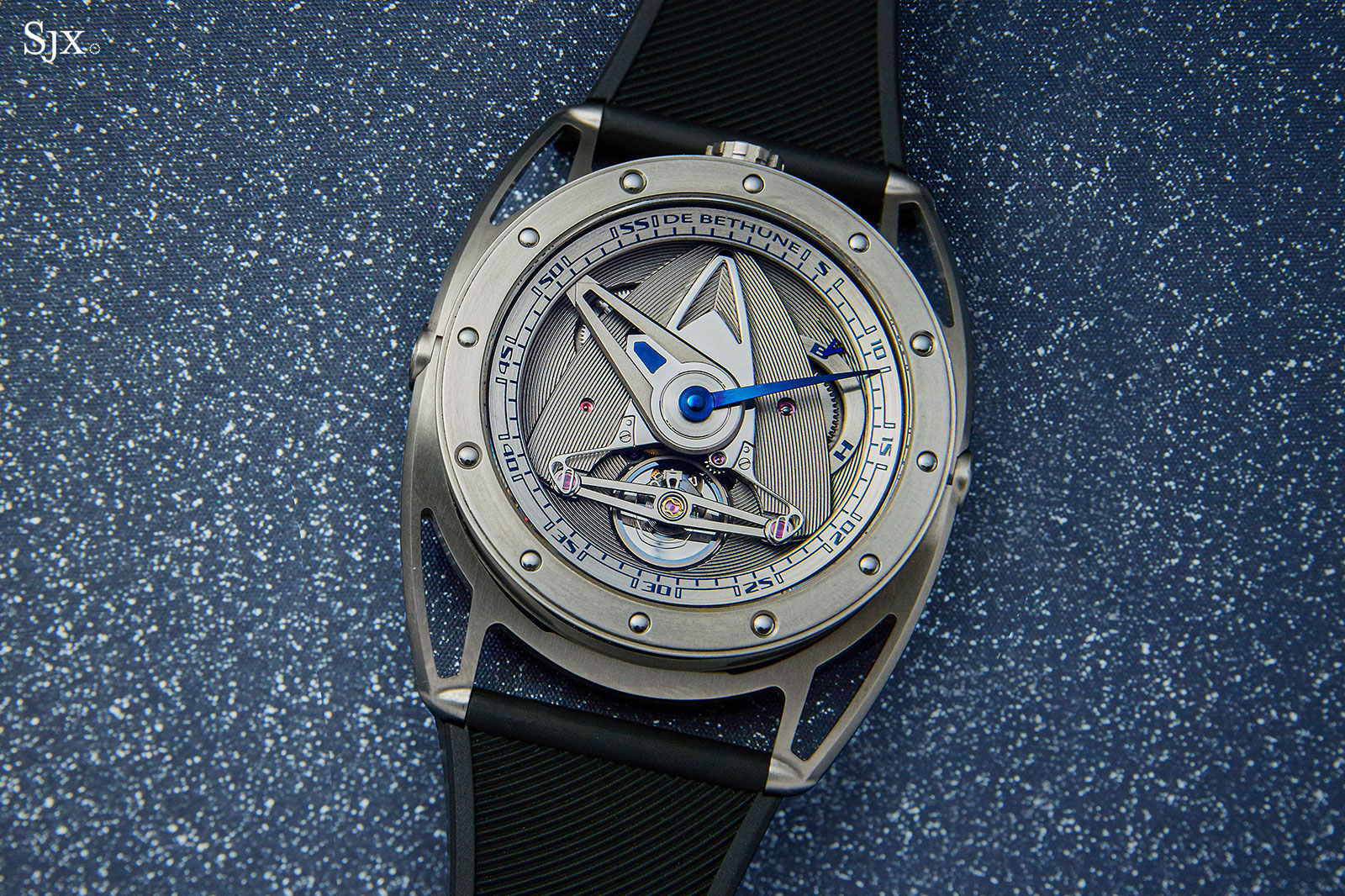 But the highlight of the case are the spring-loaded, open-worked lugs of the DB28, though here its signature “floating” lugs here have been slightly tweaked to be shorted and accented with ogive-shaped tips. And the lugs on the Grand Bleu also get black coating on the inner edges for some colour contrast. 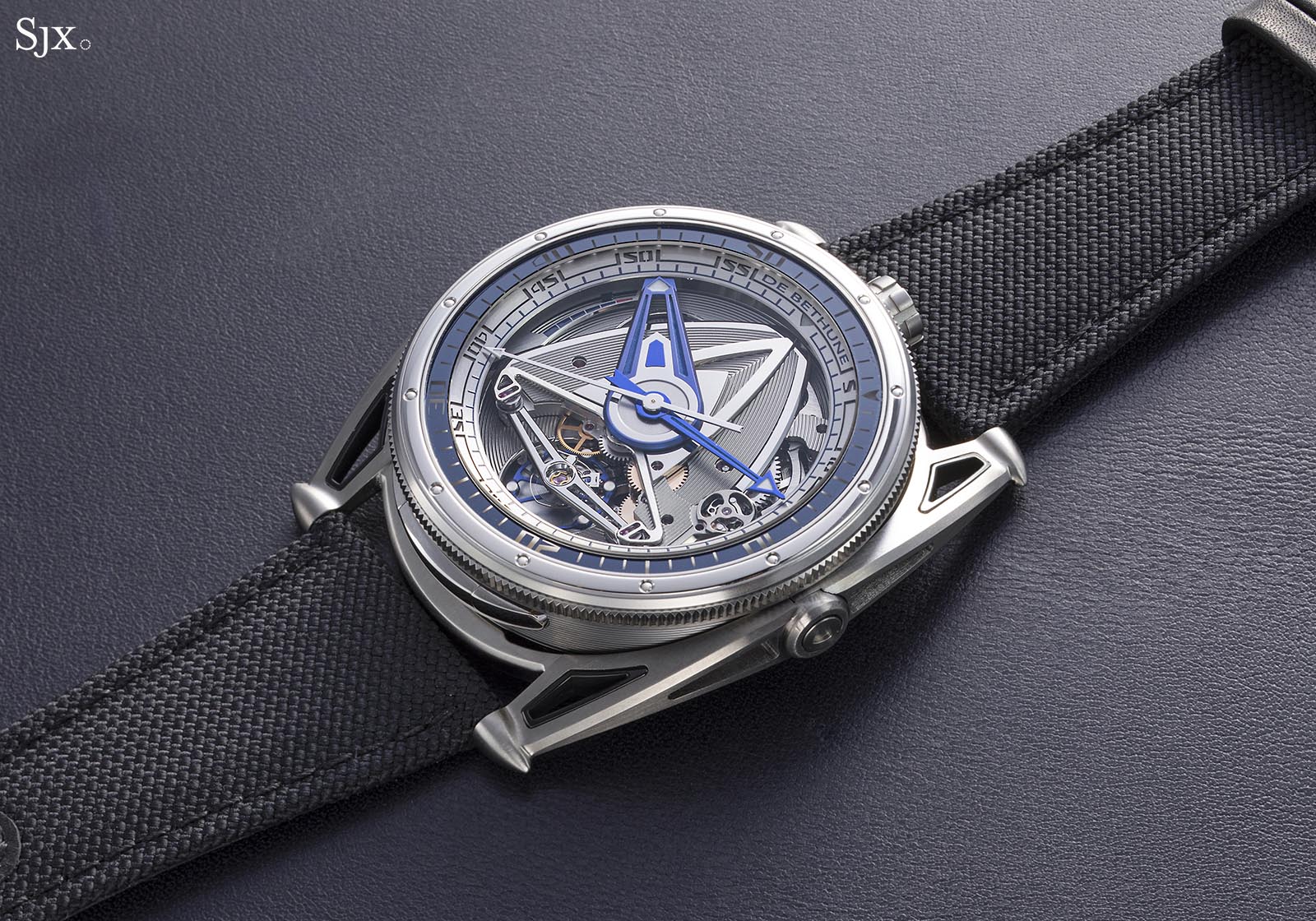 The lugs are centrally hinged right in the middle of the case band,  allowing the watch to conform well to the wearer’s wrist. And like the DB28 variants, the Grand Bleu sits flat and low on the wrist despite the slightly thicker case due to the patented lugs.

The bezel as well as case back are titanium while the case middle is black zirconium. Both metals, titanium and zirconium share many of the same desirable properties including strength, corrosion resistance and durability. And because zirconium is comparable in density to titanium, the watch remains lightweight despite being large.

But black zirconium is slightly enhanced; the material is created by heating zirconium to form a ceramic-like, black oxide layer that has similar surface hardness as sapphire crystal, rendering the surface of black zirconium extremely scratch-resistant. That being said, the hard oxide layer shares the same weakness as other similar coatings: a sharp impact that deforms the metal below can cause the coating to delaminate. 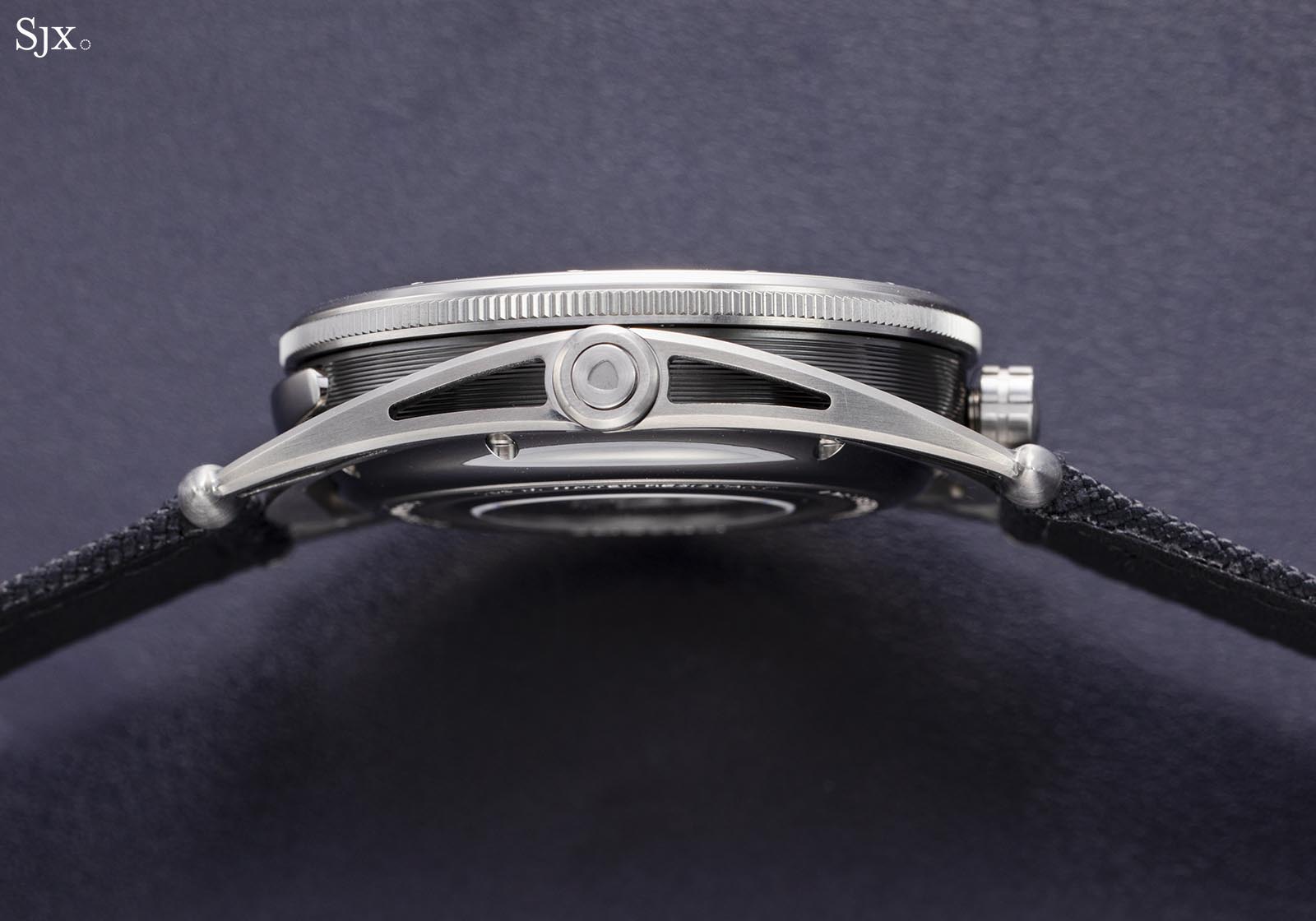 The rotating bezel has a fine, serrated edge for better grip, but it does not feature the traditional markings for elapsed time found on most dive watches. Instead, the graduated scale is printed on the underside of the crystal, which rotates with the bezel.

The printed markings allow the scale to be illuminated from the inside, while also making for a slimmer and thinner bezel, resulting in a cleaner and more elegant profile, a helpful feature given that the dial is already complex. 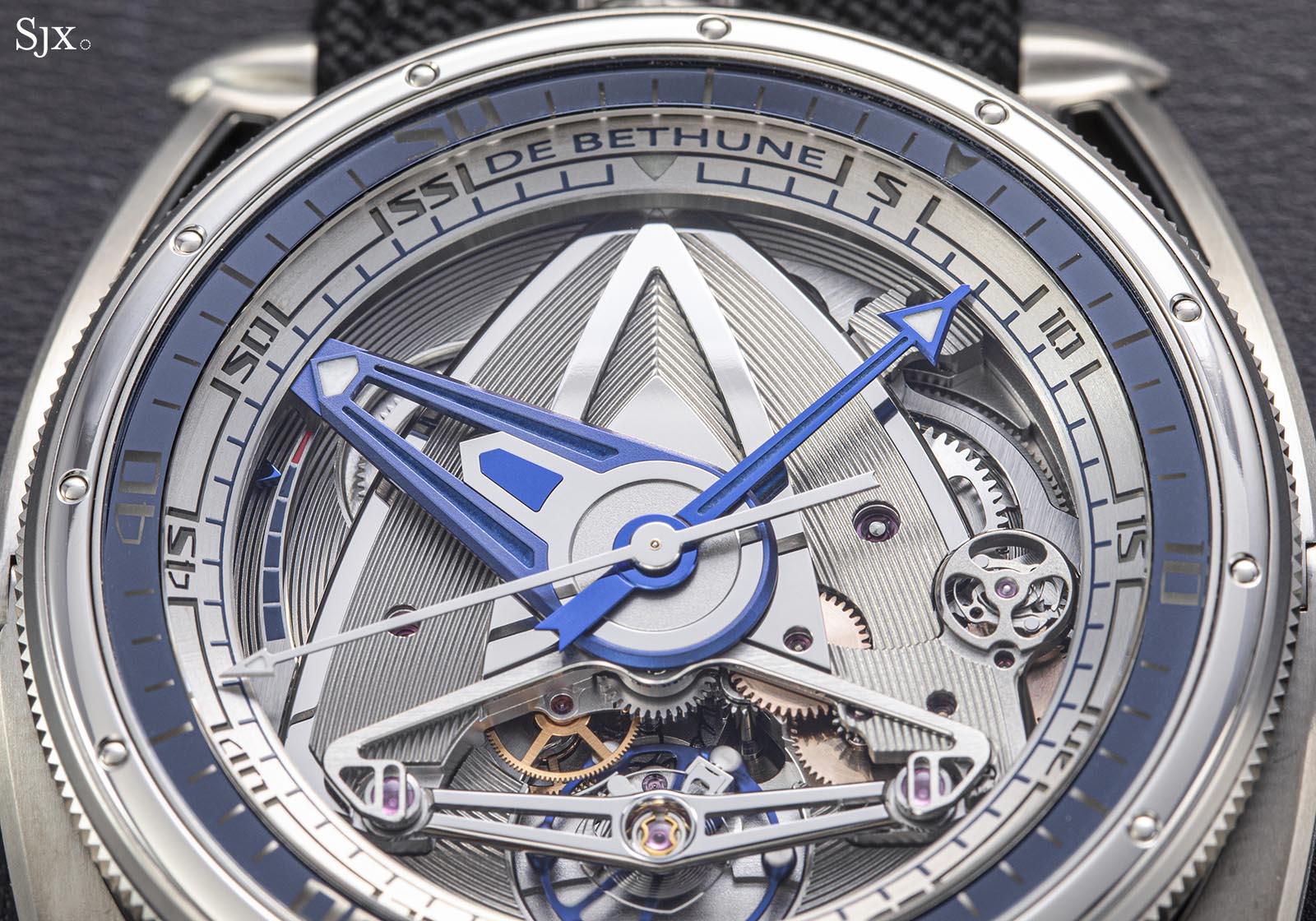 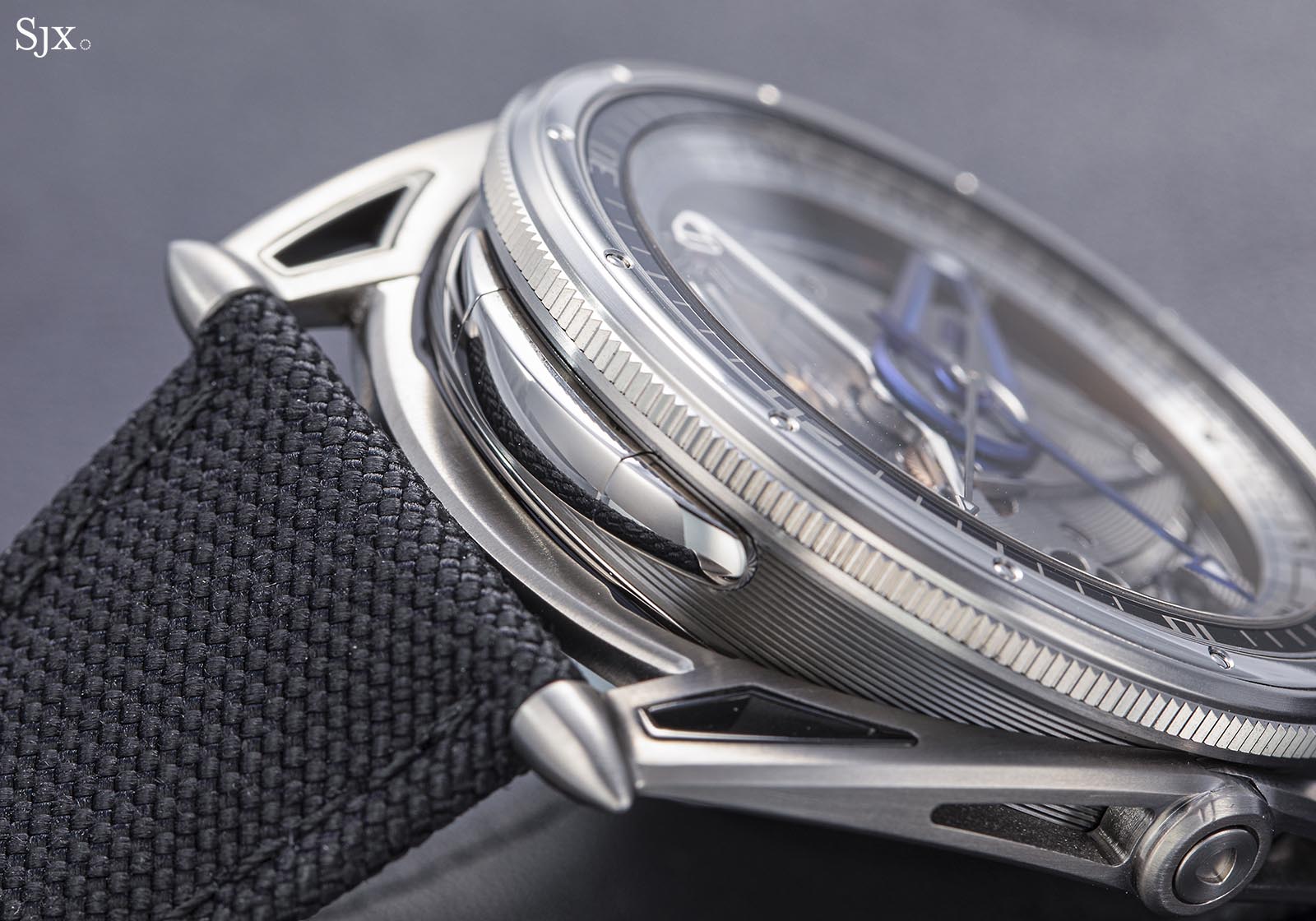 The pusher to activate LED lights

Besides De Bethune, only two other watchmakers have integrated LEDs into movements, including HYT and Van Cleef & Arpels, although the latter relies on a different technology to power its LEDs.

The LEDs in the Grand Bleu are powered via a dynamo, which is also how bicycle lamps operate. Depressing the pusher releases a small, secondary gear train connected to one mainspring, which drives a dynamo hidden under the dial – essentially causing a magnet to rotate near a coil, generating an electric current. As it operates, the speed of the secondary gear train is regulated by a governor visible at four o’clock on the dial. 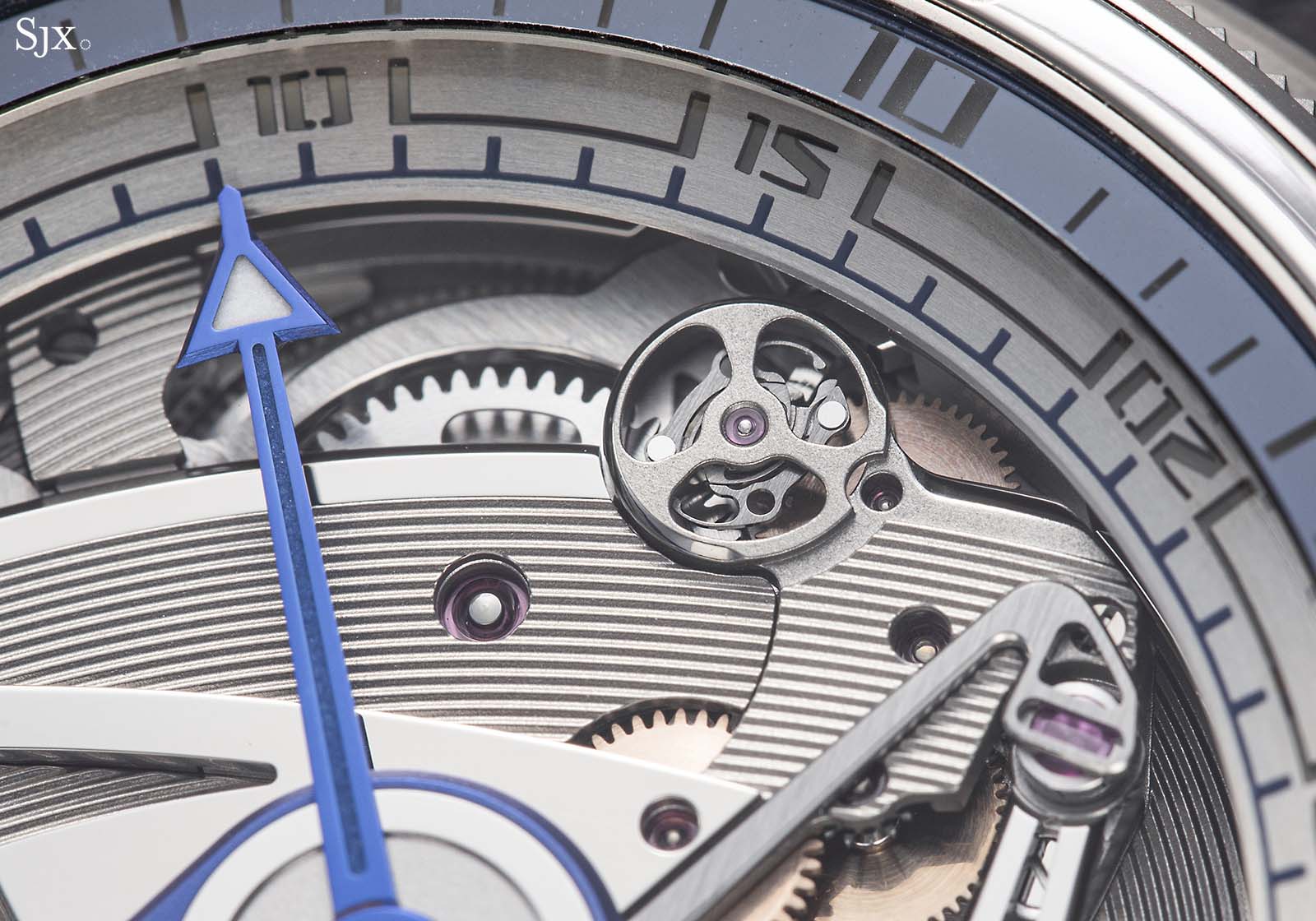 The governor that regulates the speed of the secondary gear train

Because the energy to run the dynamo comes from the left mainspring of the watch, activating the light draws on the same power source that regulates the movement. So when the pusher is depressed, not only does the dial light up, the mechanism on the dial gets going: the wheels of secondary gear train turn, the governor spins rapidly, and the barrel on the left unwinds swiftly.

The four LEDs at the quarters lit

The upside of relying on the mainspring for the light is that the pusher can be held down to light up the dial as long as the mainspring is wound. The downside is that even though the watch has an impressively long power reserve on full wind, it rapidly drains when the dynamo is being charged.

When the five-day power reserve runs down to a day, the light function is blocked to retain energy to ensure good timekeeping. If the lights are used frequently, the watch requires constant rewinding. 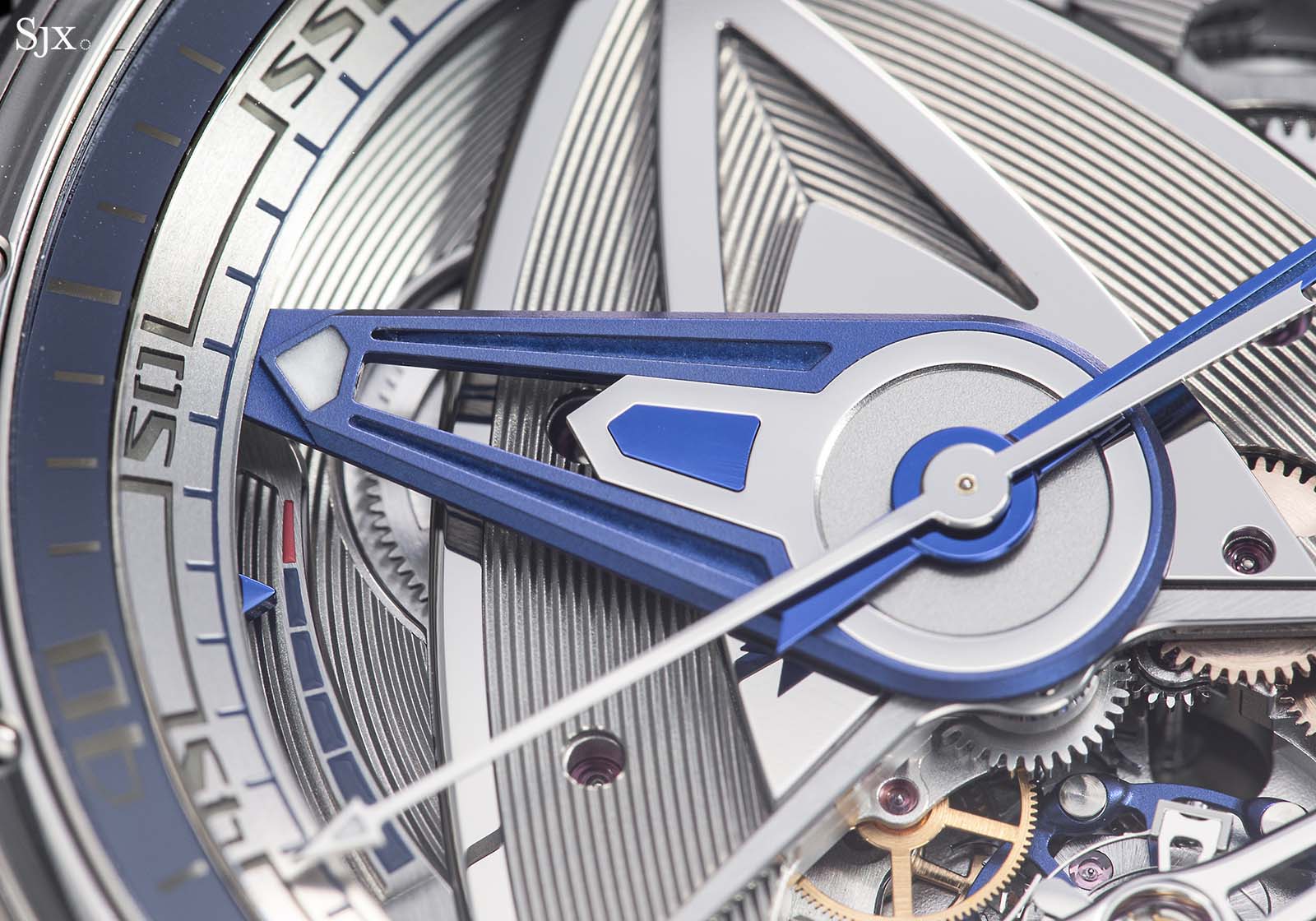 Named Blue Moon, the proprietary lume is applied to the minute tracking and rotating bezel; it appears pale blue in natural light, but emits an intense blue glow in darkness. The elapsed time scale printed on the sapphire crystal is accompanied by a “sandwich” style titanium chapter ring with cut-outs for the minute numerals so that the Blue Moon lume applied on a lower disc shines through. The lume lit up with ultraviolet light

To ensure utmost contrast, the hour and minute hands are in blued titanium while the movement is in natural titanium. The minute hand is slim and can be easily distinguished from the the outsized, delta-shaped hour hand, which blends into the movement. 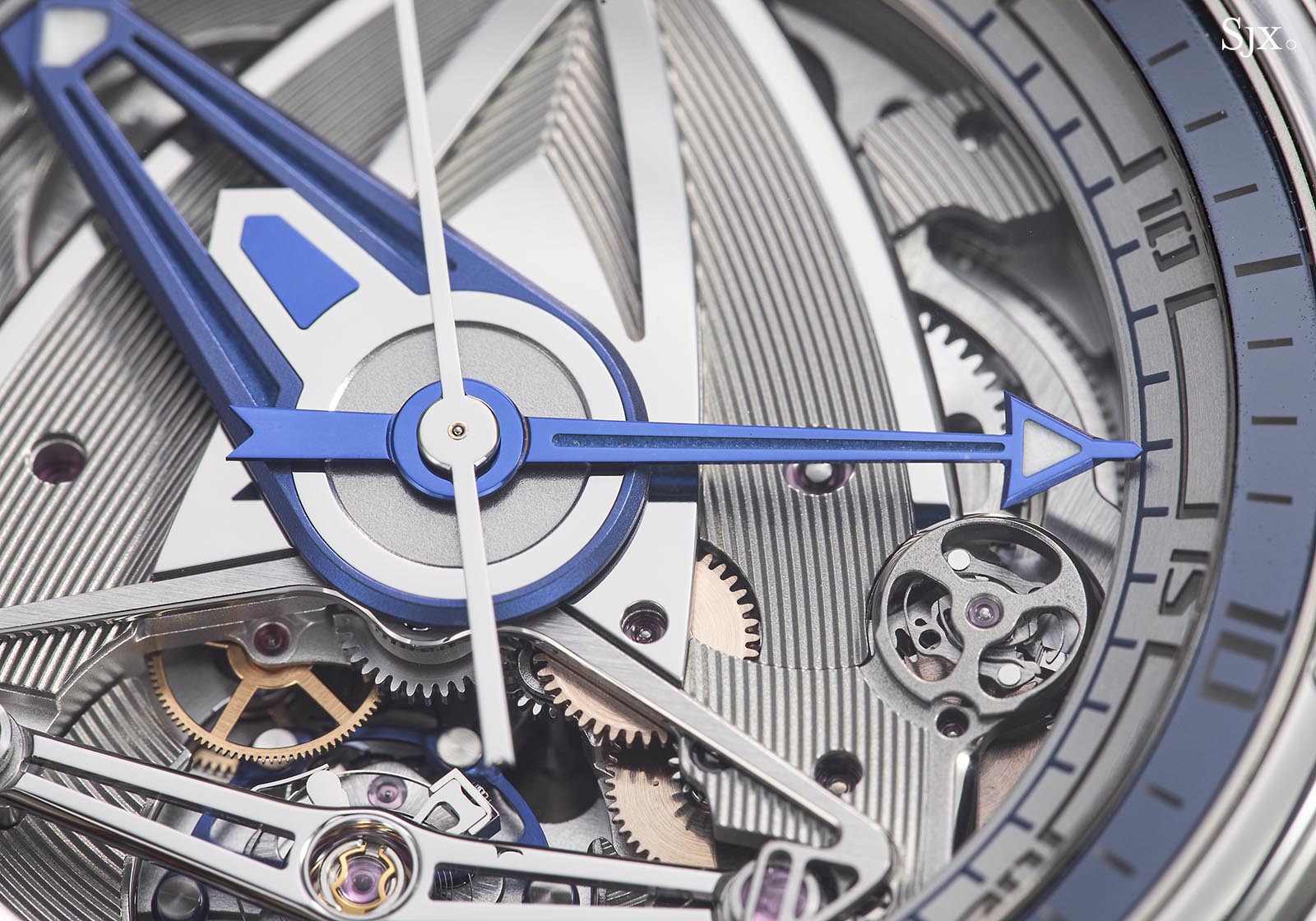 The cal. DB2080 movement was built from the ground up to accommodate a secondary gear train for the dynamo as well as a centre seconds – a rare feature in De Bethune watches. In fact, the only other De Bethune models with centre seconds are those with deadbeat, jumping seconds. A seconds hand, however, is a necessity in a dive watch as it indicates if the watch is running.

Much of the rest of the movement is vintage De Bethune – entirely mechanical but decidedly high tech.

In the DB2080, the brand’s signature delta-shaped bridge, typically a single piece, is instead made up of two components: a polished titanium bridge that holds the motion works mounted on a larger barrel bridge decorated with microlight engraving and framed by a polished border.

Partially visible on both sides of the bridge the pair of “self-regulating” barrels that offer a five-day, or 120-hour, power reserve. The barrels are each fitted with six jewelled blades, arranged like a propeller, on both the upper and low faces of the barrel, in order to minimise friction of the mainspring against the interior of the barrel, thereby optimising energy transmission and metal debris from wear.

The escape wheel, the fastest rotating wheel in the going train, is made of silicon, which has a low density and a perfect surface state, allowing it to operate with little energy and without lubrication.

That, in turn, is paired with a patented, high-performance balance wheel held in place by a flat, mirror-polished balance bridge flanked by the brand’s patented triple pare-chute shock absorbers. They are an additional pair of springs that supplement the conventional Incabloc shock protection for the balance staff, hence the triple moniker. Operating at a frequency of 4 Hz, the balance is made from blued titanium and fitted with white gold regulating weights on its periphery. The weights on the rim provide ample oscillating inertia, while the low density of titanium keeps the overall weight down. Its design has also been optimised for better aerodynamics and thermal stability.

Furthermore, it is attached to a hairspring that has a patented architecture. In contrast to the Breguet overcoil, which is delicate as it is high and vulnerable to shocks, the De Bethune hairspring is flat with a wider terminal curve, which reduces its height while improving concentricity with respect to gravity.

Hairspring with a flat terminal curve

As with all of De Bethune’s movements, the large, twin mainsprings combined with the lightweight and efficient components allow the movement to maintain a relatively high frequency while offering a long power reserve of 120 hours. Visible on the left of the dial is a power reserve indicator, colour coded in blue and red, while the mechanism that drives it is visible on the back of the watch. While the finishing on the back is clean, it is plain and simply done. The bridges are decorated with microlight engraving while the rack for the power reserve as well as the central bridge is finished with straight graining. The bridge, however, does have an extra bit of refinement, showing polished, bevelled edges. One reason the plain finish is obvious is because De Bethune has done better, including on standard DB28. De Bethune’s watches have always been about pushing the boundaries in two aspects of watchmaking – performance and design. The DB28GS Grand Bleu is no different.

It’s an extreme juxtaposition – a superlative version of what is traditionally a utilitarian instrument – that’s fascinating and unusual. But the Grand Bleu would be even more extreme and compelling if its powerful design and high-tech movement could be supported by a higher level of finish.

Following the cancellation of both the year’s biggest watch fairs – Baselworld and Watches & Wonders Geneva (WWG) – due to the COVID-19 coronavirus, a consortium of watch brands have come together to show their wares come April. The event, dubbed Geneva Watch Days, was the brainchild of Bulgari and its chief executive Jean-Christophe Babin – one of the first brands to pull out of Baselworld – and conceived with European press and retailers in mind.

Taking place when WWG was due to happen, April 26 to 29, Geneva Watch Days now has a line-up of brands big and small: Girard-Perregaux, Gerald Genta, Ulysse Nardin, Breitling, MB&F, De Bethune and Urwerk. A handful more might sign on, including H. Moser & Cie. and Chopard.

However, at present, none of the brands belonging to the major watchmaking conglomerates, Richemont or Swatch Group, or either of the Geneva giants, namely Rolex and Patek Philippe, has announced their participation – and are unlikely to due to the complexities of the industry.

Crucially, Geneva Watch Days is not a fair per se, rather it is a series of events organised by brands in separate venues, including boutiques and hotels, but happening during the same period. Because the individual events during Geneva Watch Days are small-scale and discrete, none of them will run counter to the Swiss government’s temporary ban on events with over 1,000 people.

Notably, the announcement from the organisers of Geneva Watch Days stated: “the event does not intend to substitute the historical Geneva Watches & Wonders and Baselworld fairs in the long term but presents an efficient alternative on a smaller scale, given the 2020 changing environment.”