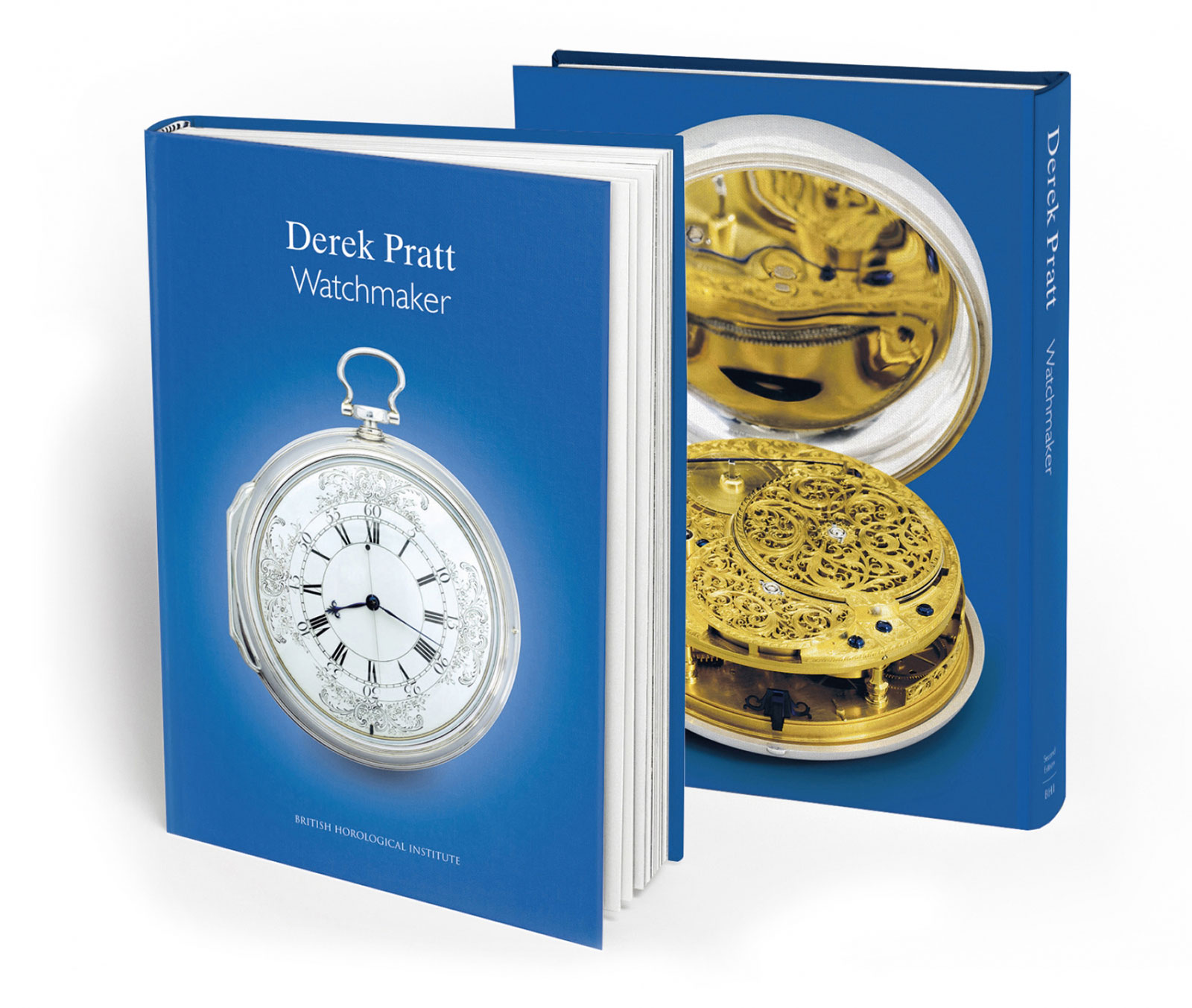 A hardbound volume dedicated to the life of the late independent watchmaker who was a peer of George Daniels and Philippe Dufour, Derek Pratt – Watchmaker has just been reprinted in a limited run by the British Horological Institute.

The 224-page book has been updated but includes all of the chapters found in the first edition. It includes testimonials by friends of Mr Pratt and a detailed explanation of his H4 recreation. Naturally the book also covers one of Mr Pratt’s specialties, engine-turning on a rose engine, a talented he relied on for the intricate guilloche dials of Urban Jurgensen, a brand he worked closely with for many years. George Daniels (left) and Derek Pratt (right), with Grahame Brooks, UK Sales Director of Audemars Piguet, in 1986, on the way to visit its factory in Switzerland in Daniels’s famous 1928 “Blower Bentley” No. YU3250 to try to interest AP in adopting the Co-Axial escapement.

The book is available direct from the BHI for £39.95. Also available at £10 is A Detailed Study of H4, a DVD that details the work of Mr Pratt and Charles Frodsham in reconstructing John Harrison’s marine chronometer.

Shipping is additional and orders can be placed here. 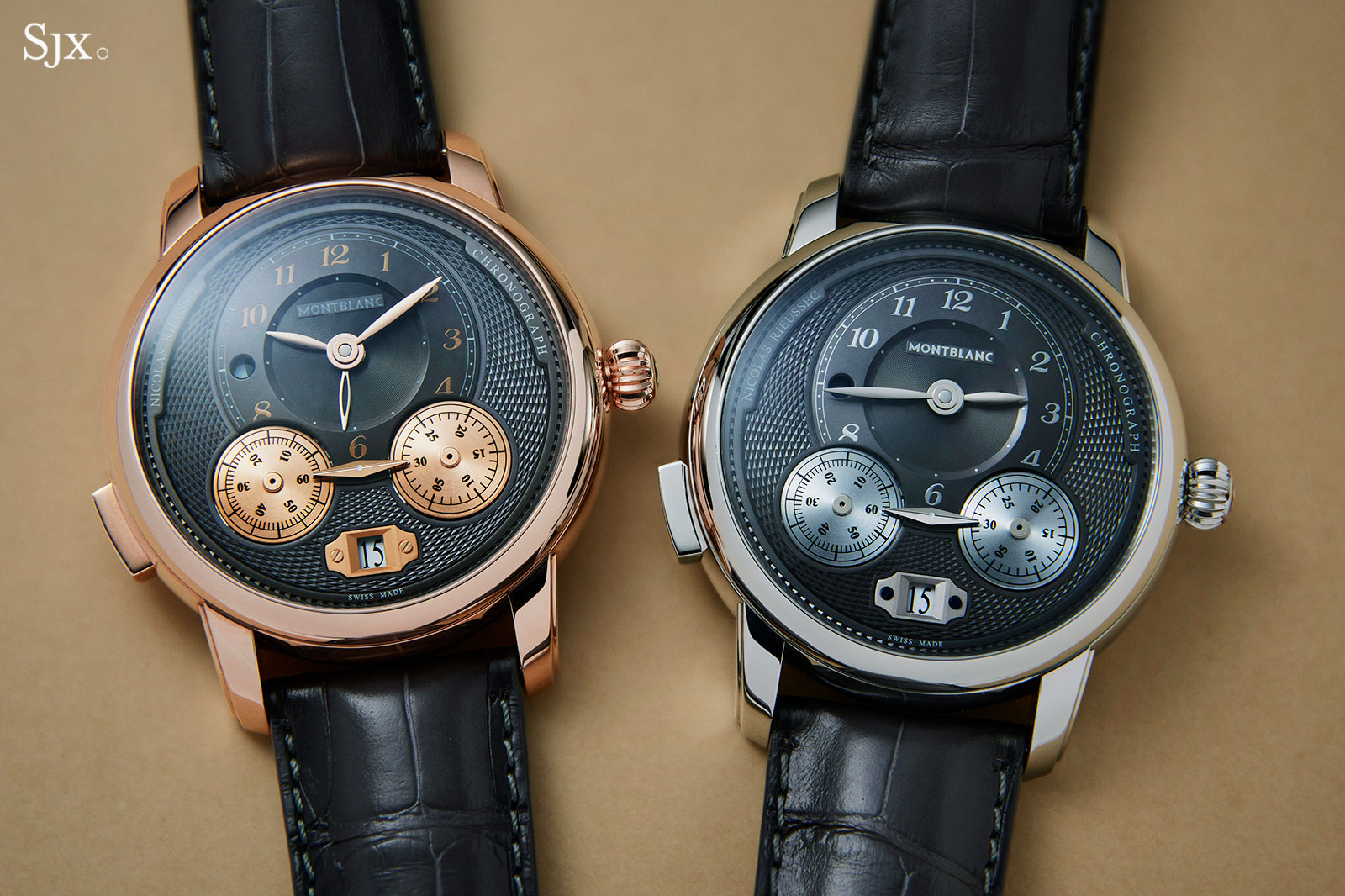 After having simplified and streamlined its distinctive Nicolas Rieussec Chronograph, Montblanc gives it a new face, with dark grey guilloche dials in either steel or red gold cases.

Perhaps one of Montblanc’s most distinctive watches, the Nicolas Rieussec Chronograph was introduced in 2008, named after the watchmaker who invented the first chronograph in 1821. Specifically it was an inking chronograph: a clock that recorded elapsed time with a stylus that drew a circle on a pair of rotating discs as time passed. Montblanc appropriate the rotating discs as the signature feature of the Nicolas Rieussec Chronograph, with a disc each for elapsed second and minutes, linked by a diamond-shaped pointer that functions as the hand to indicate elapsed time.

In the new Star Legacy models, the case is a large 44.8mm in diameter and 15.02mm high, with a rounded case band topped by a domed sapphire crystal. While it is relatively large, its rounded surfaces and curves make it seem less aggressively large compared to similarly sized chronographs. Featuring leaf-shaped hands and almost-Breguet-style numerals, the anthracite dial is slightly three-dimensional, with a recessed sub-dial for the time and twin, titanium chronograph discs. The discs are plated in either red gold or rhodium coated to match the case metal.

Time is indicated in a recessed, off-center sub-dial, while the date is at six o’clock. In addition, a second-time zone is displayed by a skeletonised hour hand that works in sync with a day-and-night indicator inside an aperture at nine o’clock. Like the earlier generations of Nicolas Rieussec watches, this has lots of Baroque flourish in its design. Not as much as on the most florid of the Rieussec watches, but elaborate nonetheless. The date, for instance, sits in a gilded frame affixed by two screws.

The bulk of the dial surface is finished with a barleycorn guilloche while the sub-dial for the time has a stamped concentric finish in its centre. The chronograph discs, on the other hand, have a concentric brushed finish. Inside is the MB R200, an automatic movement with an integrated, mono-pusher chronograph that has both a column wheel and vertical coupling. And it has twin barrels that give it a 72-hour power reserve. While both the gold and steel version of the watch have the same movement, the rotors in each are plated to match the case material. The movement has a surprisingly symmetrical bridge layout, an unusual feature for a chronograph. And it is well decorated, albeit mechanically. The bridges have bevelled edges, Geneva stripes on their tops surfaces and blued steel screws. And as is standard on most chronographs, an aperture on the barrel bridge reveals the column wheel, usually considered a feature found in higher-end chronograph movements. The Montblanc Star Legacy Nicolas Rieussec Chronograph in red gold (ref. 119964) is priced at €20,000, with the pricing for the steel model yet to be announced. 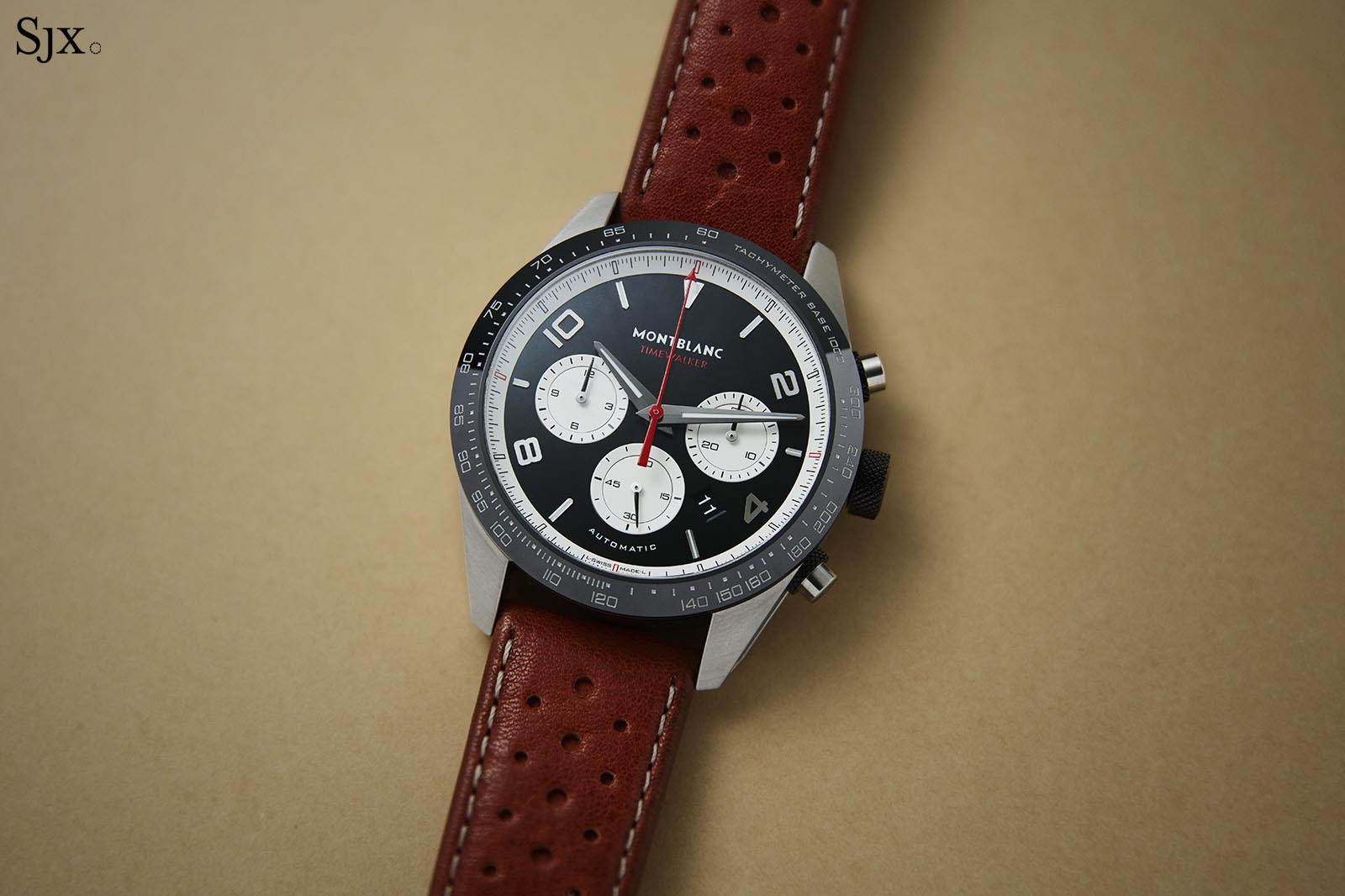 Since taking the helm of Montblanc’s watch division, Davide Cerrato has relied heavily on Minerva, the brand’s watchmaking workshop, for inspiration and historical legitimacy, particularly for Montblanc’s sports and chronograph watches.

While the 1858 line of watches lean towards the vintage end of the design spectrum, the TimeWalker collection takes a more modern approach, while still retaining retro-racing car vibes. Ahead of SIHH 2019, the TimeWalker line welcomes two new chronographs featuring “reverse panda” dials – white registers on black – a design originally conceived to boost the legibility of the chronograph.

The first watch is the entry-level TimeWalker Automatic Chronograph, now with a smaller and slimmer case. The case is a more wearable 41mm in diameter and 14.54mm high, compared to a chunky 43mm by 15.2mm in the preceding generation. Relatively simple in form with sloping, integrated lugs, the case is satin finished and fitted with a black ceramic tachymeter bezel. It’s worth noting the smooth case flanks that distinguish this from the TimeWalker chronographs with in-house movements that have concave flanks. The dial is black, with applied hour markers and red accents on the dial and hands. It has contrasting silver-white counters and a sloping flange in the same finish, with a date at three.

The constant seconds sub-dial at nine o’clock has been smartly done in black – and decorated with a subtle Montblanc star – which improves the symmetry of the dial as it leaves only the vertically aligned registers prominent. This is powered by the Sellita SW500, a clone of the Valjoux 7750, which is hidden behind a solid case back. And it’s delivered on a perforated, Rally-style black rubber strap. Pictured is the prototype with a smooth case back; production watches will have an engraved logo and lettering

Next is the TimeWalker Manufacture Chronograph, which was introduced last year with a “panda” dial. Now the dial colours have been inverted, but the watch is otherwise identical.

While the Sellita-powered model has the “6-9-12” chronograph layout typical of a 7750, along with a white date wheel, the “manufacture” model has “tri-compax” registers and matching black date wheel. It’s a much better look, looking both a bit more upscale and cohesive. The details of the dial are largely the same, with applied hour markers and a sloping flange for the outer minute track. The case is identically sized, 43mm in diameter and 15.2mm in height, and equipped with the same black ceramic bezel. But it is set apart with the recessed hollows on the sides of the lugs. The movement inside is the cal. MB 25.10, which is actually based on the IWC cal. 69000. It’s an automatic movement with a 46-hour power reserve, while the chronograph that has both a column wheel and horizontal coupling. Visible through the tinted sapphire case back, the movement has its rotor shaped like a retro steering wheel. And in keeping with its premium position relative to the Sellita-powered model, this has a perforated brown calf leather strap made by Montblanc’s leather factory near Florence.