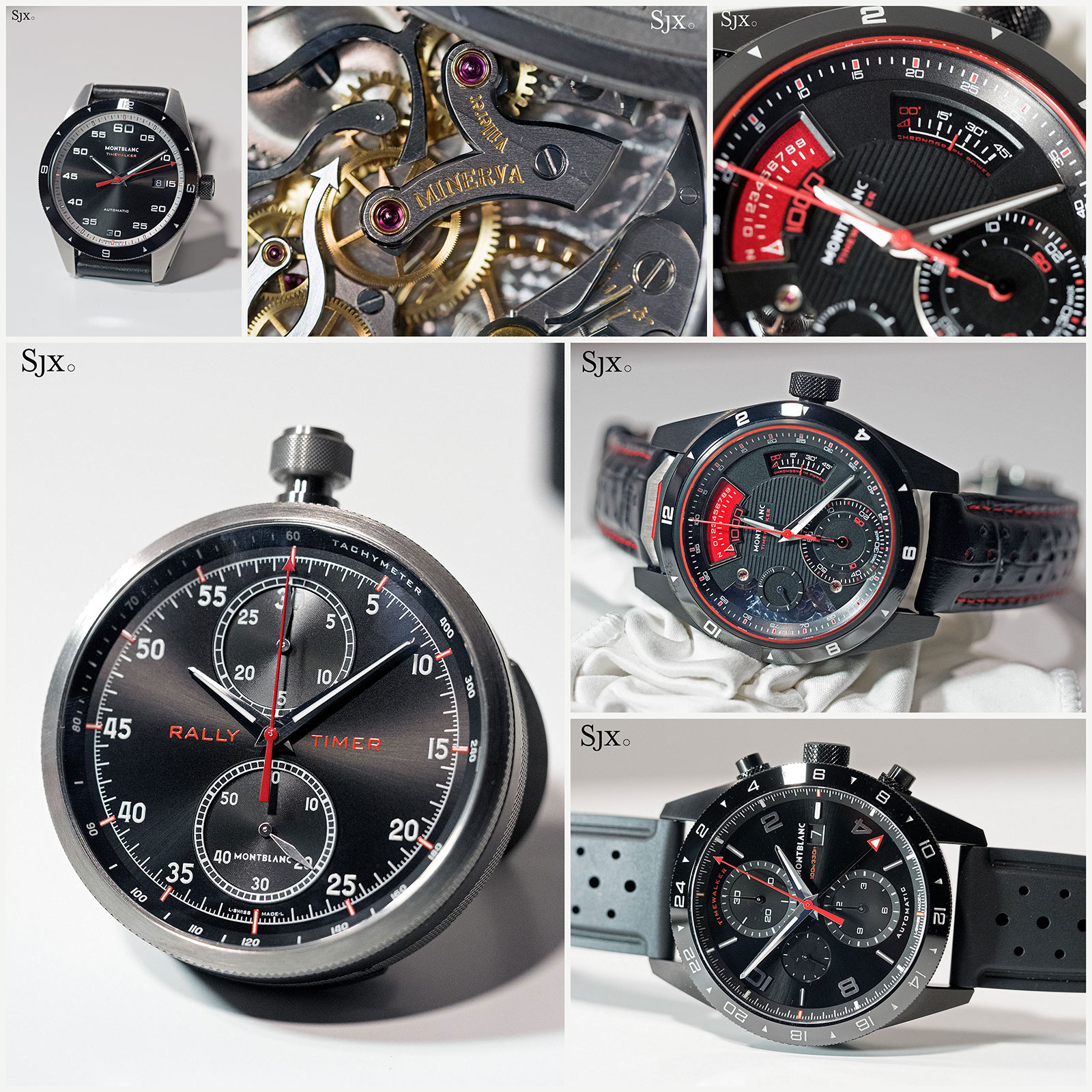 Under dapper Italian Davide Cerrato, Montblanc‘s watch division, which also owns high-end movement maker Minerva, has gradually overhauled each of its collections, with SIHH 2017 seeing the debut of the new TimeWalker.

Conceived as a sports watch inspired by motor racing – a nod to Minerva’s history as a maker of sporting stopwatches – the TimeWalker collection is made up of five watches, starting with the top of the line TimeWalker Chronograph 1000 Limited Edition 18.

Activated by a large pusher at 12 o’clock in-between the lugs, the TimeWalker Chronograph 1000 features a stopwatch that can measure up to 1/1000th of a second, possible thanks to a second, dedicated balance wheel that oscillates at 360,000 beats per hour (bph) or 50Hz. Small and attached to twin hairsprings for better precision, the second balance wheel is partially visible through an aperture on the dial at seven o’clock. The 360,000bph frequency translates into 6000 beats per minute, or 100 beats per second. Additional gearing in the chronograph fear train that centres on a “thousandth wheel” further increases the resolution of the chronograph, with the thousandth wheel making 10 rotations a second, making possible the 1/1000th of a second measurement. This is displayed in the fan-shaped window at 12 o’clock.

Elapsed seconds and minutes are shown in the register at six o’clock, while the central seconds hand indicates 1/100th of a second, meaning the hand whizzes around the dial once every second.

Another window at three o’clock shows the chronograph power reserve. Having its own mainspring, the chronograph can run for 45 minutes, while the time display can go for 100 hours on full wind. Impressive as it is, the movement inside is not actually new. Based on a Minerva chronograph movement, the calibre MB M66.26 was first introduced in 2012 inside the TimeWriter II Chronographe Bi-Fréquence 1000. In fact, two years ago Montblanc simplified the movement by removing the 1/1000th of a second mechanism, creating a 1/100th of a second chronograph for much less money. The new TimeWalker Chronograph 1000 is instead aggressively modern, with a diamond-like carbon (DLC) coated titanium case that’s 46.4mm in diameter and 17.34mm high. A knurled bezel and crown are both nods to vintage stopwatches.

Also powered by a Minerva calibre, albeit a simpler one, is the TimeWalker Chronograph Rally Timer Counter Limited Edition 100. Styled like a vintage stopwatch, it’s a single-button chronograph with the chronograph pusher and crown co-axial at 12 o’clock. It is also a convertible timepiece that can go from being a wristwatch to a standing desk clock to a dashboard instrument. Measuring 50mm in diameter and made of titanium, the extremely large case and stopwatch-inspired look make it seem more like an object than a pure wristwatch. As a wristwatch the fold-out lugs attach to a leather strap secured by buttons, giving it a retro look. The strap is a bit thin for the size of the watch, which is still hefty despite being lightweight titanium. Removing the leather band and folding in the lugs turn it into a desk clock thanks to a pair of legs on the back. And in its third iteration it can be screwed into a metal plate that attaches to a car’s dashboard.

Inside is the calibre MB M16.29, a hand-wound movement that’s beautifully finished in the best tradition of Minerva. In fact it’s the same calibre inside the 1858 Chronograph Tachymetre first introduced last year. The first time zone is indicated by the usual hour and minute hands, the second by the red arrow-tipped hand. And the this time zone can be set via the rotating black ceramic bezel. Similar but without the additional time zones, the TimeWalker Chronograph Automatic is a straightforward chronograph with date display. The case is 43mm and stainless steel with a black ceramic bezel.  Inside is the Sellita SW500, a clone of the Valjoux 7750.

This is available with a black or silver dial, with a contrast colour minute track. Also stainless steel with a black ceramic bezel, the dial is modelled on a stopwatch, with five minute markings going from “5” to “60” for the hours. This is powered by the Sellita SW200, an automatic with a 38-hour power reserve that’s a clone of the ETA 2824. The other key additions to the line-up for 2017 were the 1858 Chronograph Tachymeter in bronze, as well as the 1858 Automatic and 1858 Dual Time in two-tone steel and bronze. All three were previewed before SIHH, and you can see them in the metal here.