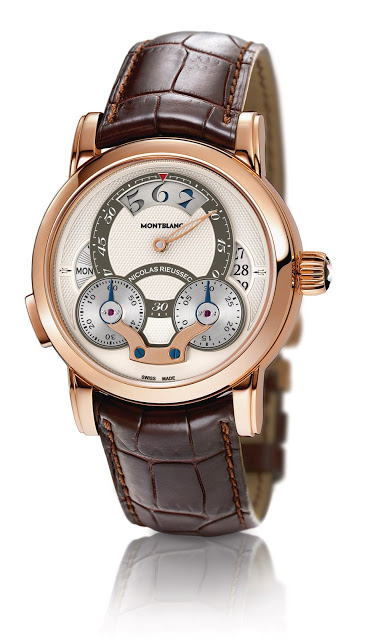 For 2013 Montblanc has another addition to the successful Nicolas Rieussec line of chronographs. The Nicolas Rieussec Rising Hours with the MB R220 calibre features a novel day and night indicator at 12 o’clock.

In the aperture at noon is the wandering hours, but what makes this unusual is the integrated day and night display. The hours is comprised of two discs, the top one with the hour numerals cut out, and a lower disc that is shaded half in black and the other half in light blue. As the day passes, the disc below will rotate, so that the hour numerals will appear either as blue or white, depending on the time of day. At six o’clock each day, both in morning and night, the six numeral will show exactly half in each colour. This is accomplished with a day and night disc that rotates at a varying rate throughout the day, thanks to a Maltese cross mechanism with twin cams. So from nine to three (and vice versa), the disc is not engaged. But after three the disc engages and turns at an increasing speed, until 4:30 when it rotates at the same rate as the hour disc above. And after 7:30 the disc declerates, until nine when it disc engages and stops. Variations on this mechanism has been used in other watches, most notably for the Urwerk 103 and AP Starwheel. Pictured here in rose gold, this will also be available in platinum as well as steel, with the platinum version limited to 28 pieces. – SJX