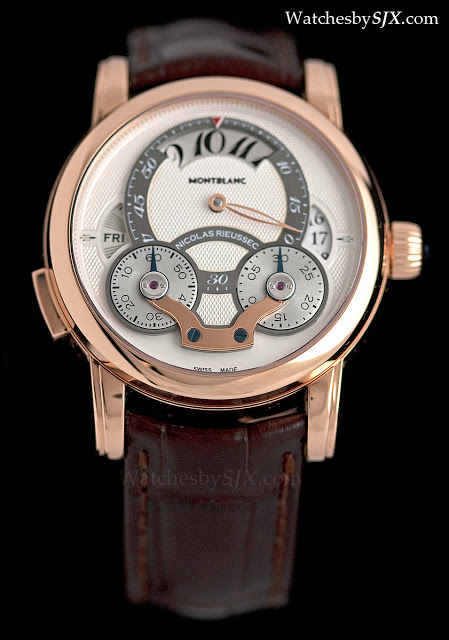 At 12 o’clock is the aperture showing the hour display which is a brushed, silver disc with Arabic numberals and a red arrow that points to the current hour.  Each of the numerals on the hour disc is a cut out, showing the colour of the disc beneath the hour disc – that is the day and night indicator. The colour of the disc below changes according to the time of day, so the numerals are black during the day and blue at night. And at six o’clock,  twice a day, the number “6” appears half black and half blue, signifying the transition from night to morning or evening to night. Though it is simple to read, the mechanism behind the day and night indicator is complex. The blue and black day/night disc rotates at a different rate depending on the time of day.  From nine to three (and vice versa), the disc is not engaged, and shows the same colour. But after three the disc engages and turns at an increasing speed so that the colour change for day or night can happen later on. At 4:30 onwards the day/night disc rotates at the same rate as the hour disc above; and at six the disc shows half black and blue. After 7:30 the disc decelerates, until nine when it disc disengages and stops until three. This is accomplished by a Maltese cross mechanism with two cams, similar in principle to the AP Starwheel and Urwerk 103. The rest of the movement is conventional and similar to the other Rieussec chronographs. In addition to the twin chronograph discs, the dial has a window for the day at nine o’clock and the date opposite at three. Inside is the Montblanc Rieussec R220 movement, with Magic Lever winding, vertical clutch and column wheel, as is the case with most of the newer chronograph calibres from Richemont brands. This will be available in steel, rose gold and platinum, with the platinum being a limited edition of 28 pieces. The steel will retail for EUR10,750 and the gold EUR26,900. The rest of Montblanc’s SIHH 2013 collection can be seen in my SIHH report. – SJX