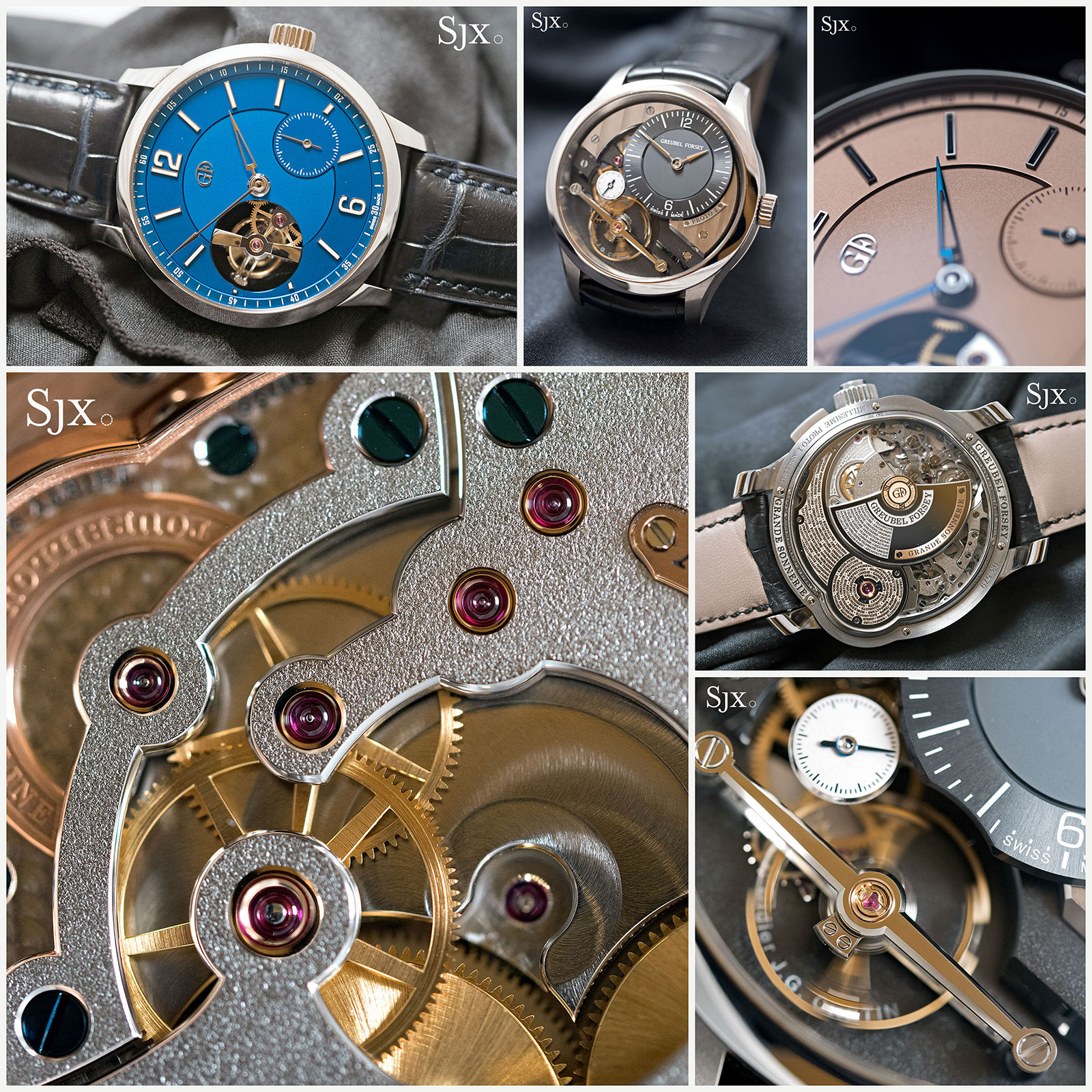 Greubel Forsey claimed one of the most complicated watches unveiled at SIHH 2017 with a grande sonnerie wristwatch, but also debuted variants of its two entry-level timepieces, the Signature 1 and Tourbillon 24 Seconde Vision.

Boasting an incline tourbillon and automatic winding for the second barrel, the Grande Sonnerie is styled in the typical Greubel Forsey manner – large and modern-looking with an expensively constructed dial and gorgeously intricate movement – the Grande Sonnerie wristwatch shows the striking mechanism on the front at 10 o’clock, while the incline tourbillon is at eight. A button at four o’clock acts as the function selector for silent, small strike or grande strike mode. Everything is sensibly laid out and legible, as well as easy to use. Several safety mechanisms in the movement ensure nothing can be broken if any function is accidentally triggered; for instance the repeater cannot be activated while the time is being set. On the rear is where it gets interesting, with the 935-part movement shown in all its glory. In the centre is the rotor that winds the 20-hour mainspring for the striking mechanism; the primary, 72-hour barrel for timekeeping is wound via the crown.

Tiny, relief text that philosophises about life covers most of the bridges and rotor, a feature that is frequently found on Greubel Forsey watches. And there is also a liberal use of fine, frosted surfaces, another of the brand’s signatures. At 43.5mm wide and 16.13mm high, the Grande Sonnerie is imposing in the usual style of the brand, but being titanium it’s fairly lightweight. The titanium case also aids the chiming, which is loud, clear and pleasant.

Most notably the movement is remarkably similar to that in the Vacheron Constantin Symphonia Grande Sonnerie (that’s a traditional grande sonnerie without a tourbillon or automatic winding), which was unveiled at the same fair and priced exactly the same, at SFr1.15m.

The other wristwatches introduced were variations on existing models, including the Tourbillon 24 Secondes Edition Historique. This is the last iteration of the Greubel Forsey 24-second tourbillon (which is also available in the Contemporain livery), hence the “Historique” appellation. This is equipped with a tourbillon that makes one rotation every 24 seconds, as compared to a minute for conventional tourbillons, while being inclined at 25 degrees. Designed to average out gravitational errors while being in constant motion on the wrist, the 24-second tourbillon was introduced 10 years ago. While the movement is mechanically similar to past versions, the Historique edition gets a redesigned dial (but the dial remains a plate of solid gold) that is cleanly styled but detailed when seen up close. From a distance it looks like a two-tone dial divided into halves, giving it a more streamlined, contemporary feel that the average Greubel Forsey.

But half the dial is actually covered in minute raised text that explains the Greubel Forsey philosophy in French, while the sub-seconds and power reserve indicated by discs and pointers. The case is 44mm in diameter, while the movement is exquisitely finished with frosted bridges and pronounced anglage, just like earlier iterations of the model. The Tourbillon 24 Secondes Edition Historique is a limited edition of 11 pieces each in red gold or platinum. It’s priced at approximately US$550,000 in gold. While the new dial colours are striking different, the dial construction remains the same. The dial is a disc of solid gold, galvanically treated to achieve the colour, and then fitted with applied hour markers that are filled with vitreous enamel. The rest of the watch remains the same with a 43.5mm platinum case, and a gorgeously finished hand-wound movement showing the tourbillon at nine o’clock on the front, and the power reserve on the rear. The Tourbillon 24 Secondes Vision costs SFr290,000, about 10% less than the next most expensive tourbillon from the brand.

Even more affordable, relatively speaking, is the Signature 1. Introduced last year in stainless steel, the Signature 1 is a time-only wristwatch that delivers the brand’s trademark movement quality without any complications or the accompanying price. The key characteristic of the platinum model is the dark grey dial, while the other versions (in gold as well as steel) had silver dials. Though the platinum Signature 1 is visually similar, the tactile feel is significantly different, being heftier in the hand and feeling more expensively crafted.

The rest of the watch remains identical, with a strikingly handsome movement that shows off the oversized balance wheel on the front, secured by a flat-polished bridge. Though the movement has no complications, it is elaborately constructed, with an exposed barrel topped with a serrated ratchet wheel, all held down by a three-legged bridge. Priced at SFr155,000 in steel, the Signature 1 is now available in its final iteration with a platinum case, priced at SFr190,000.

The most interesting announcement from Greubel Forsey, however, was a watch that was not for sale. Co-founder Stephen Forsey had it on his wrist during the fair, but being a work in progress little was revealed about its workings. The Mechanical Nano prototype with a miniature lightning seconds hand that’s just 1mm long, and visible through a 23-times magnifier

But according to Mr Forsey, the key advantage of the compact movement is not the long autonomy, but rather the space it frees up for other complications. Expect this to be ready in two to three years.