Just days after all of Richemont’s watch brands showcased their wares at the SIHH 2018 watch fair, the Swiss luxury group has announced an offer to acquire all the shares in Yoox Net-a-Porter for €38 a share, or about 25% over Friday’s closing price, according to a just-released company announcement.

Richemont now owns about half of Yoox Net-a-Porter, a leading retailer that sold €2.1 billion of luxury goods online in 2016. It is the result of a 2015 merger between the two firms that gave the company its name, a combination that was seen at the time as Richemont divesting its online retail presence, after having taken a majority stake in Net-a-Porter in 2010.

Having already made public his aversion to growing his stable of luxury brands, which range from A. Lange & Söhne to Van Cleef & Arpels, Richemont chairman Johann Rupert is making his most aggressive investment in online retail yet, valuing Yoox Net-a-Porter at almost €3.5 billion. If successful the takeover will put Richemont ahead of its rivals like Swatch Group and Rolex in e-commerce.

Richemont recently entered e-commerce with products from several of its brands, including Cartier, IWC and Panerai, and will delist Yoox Net-a-Porter should the takeover succeed, but retain it as an separate enterprise. Nevertheless that will likely mean more watches from Richemont available in more avenues online.

Mr Federico Marchetti, chief executive officer of Yoox Net-a-Porter, has agreed to tender his shares in the offer, which requires the consent of other shareholders to succeed. 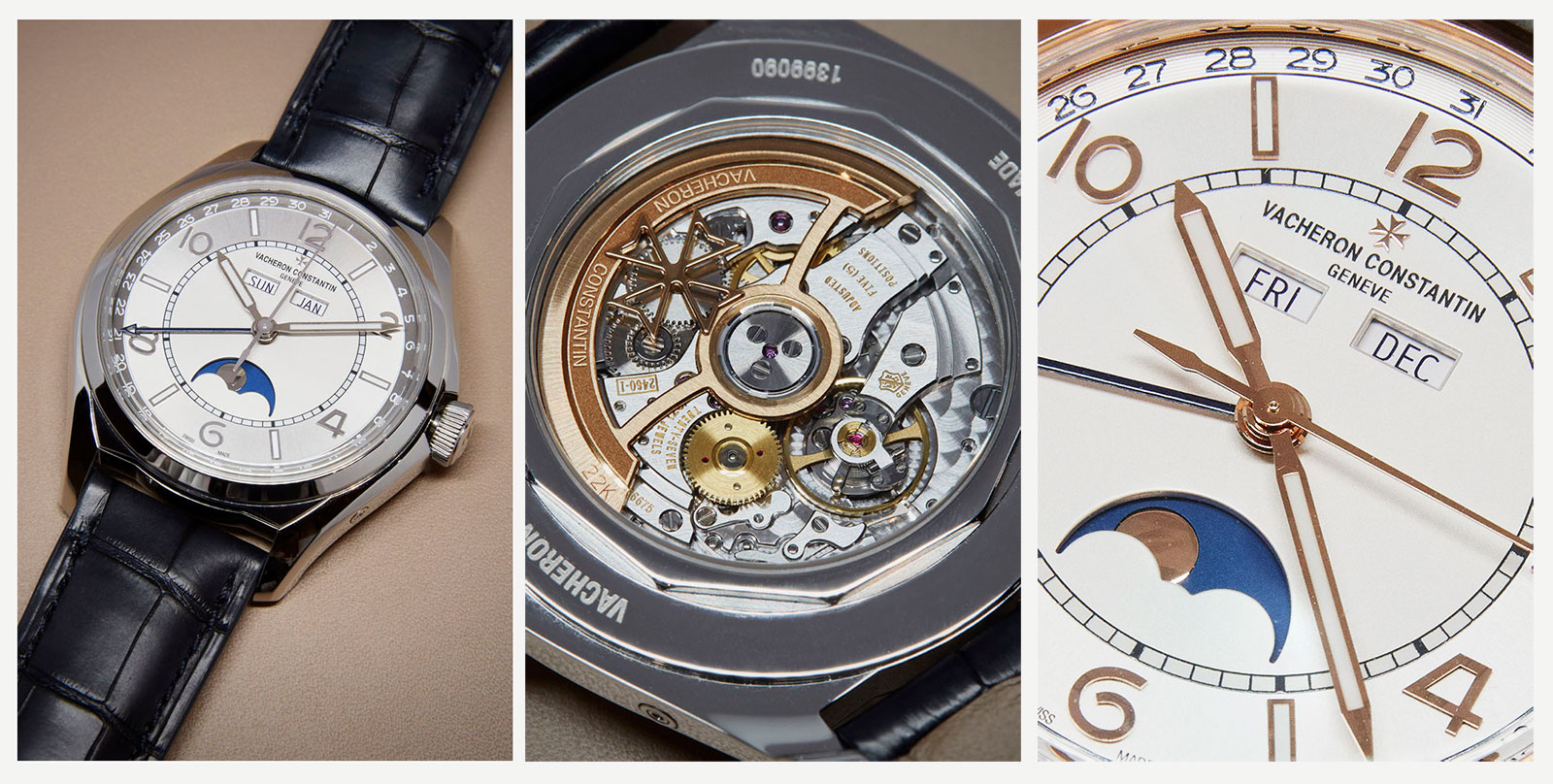 One of the most talked about watches at SIHH 2018 was the Vacheron Constantin FiftySix, by virtue of its price, which starts at just US$11,700. That’s half the price of the Overseas automatic sports watch, and a third less than the Quai de l’Île in steel. Is the watch any good?

Visually the FiftySix appears to be a departure from Vacheron Constantin’s house style, and takes a moment to get used to. But the design works.

Three models are available (with more slated to be added later in the year), with the basic being the FiftySix Self-Winding. Having no complications, it is the thinnest of the lot, being slimmer than it looks, and cuts an elegant profile on the wrist. Visually, however, the FiftySix Complete Calendar is the most appealing, having the traditional triple calendar layout. It’s legible and obviously modern, yet vaguely retro thanks to the triple calendar complication. The FiftySix Day-Date is arguably the most practical, featuring the complications most useful in everyday life. But it is not as visually interesting as either of its siblings, and the displays cutting through the minute track are jarring. According to Christian Selmoni, Vacheron Constantin’s Style & Heritage Director, the FiftySix was intended to be a “modern collection… a little bit based on [the ref. 6073 of 1956]”. It succeeds at that; while the FiftySix case shares the same distinctive lugs of the ref. 6073, it still looks and feels like a freshly conceived modern watch.

Though the case is just 40mm in diameter (all three versions are the same width), its footprint feels larger on the wrist, making it a good size for modern tastes. Christian Selmoni, Style & Heritage Director and one of the longest tenured employees at Vacheron Constantin

Both the steel and gold versions of the FiftySix have the same case finish, which is mirror-polished on all surfaces. While the polishing is well done, it lacks visual variation, and the mirrored surface tends to pick up fingerprints. Overall though the case looks and feels good, aided by details like the “box-shape” sapphire crystal. It feels like a proper Vacheron Constantin case, and not an entry-level one.

The same can be said of the dials, which have three primary finishes: concentric stamped guilloche on the outermost track, radial brushing on the chapter ring for the hour markers and a grained surface in the centre. That’s matched with applied hour markers – which are solid gold – as well as neat printing. All three models are indistinguishable on the outside, in terms of fit and finish. Inside, however, the watches diverge from each other. The higher end FiftySix Complete Calendar and Day-Date are both powered by in-house movements  that are different calibres (cal. 2475 SC/2 in the Day-Date and cal. 2460 QCL/1 in the Complete Calendar) but built on the same base cal. 2460. Now well over a decade old, the cal. 2460 in found in some of Vacheron Constantin’s priciest watches. It’s a sophisticated and fairly complex movement, made up of 182 parts in its simplest, time-only variant, about a quarter more than a lower cost movement. Even the stop seconds function (which relies on a lever to touch the balance wheel), is made up of well-finished several levers.

The cal. 2460 is bears the Poincon de Geneve, or Geneva Seal hallmark, which means its decorative finishing is up to scratch. Even the levers for the hack seconds are straight grained on top and bevelled on their edges, as are the teeth of the barrel wheels.

In short, the movements in both the FiftySix Complete Calendar and Day-Date are very, very well executed.

The base model in the collection, the FiftySix Self-Winding, uses a “manufacture”, rather than in-house, movement. Named the cal. 1326, it is based on the Cartier 1904 MC that was introduced in 2012 as Cartier was rapidly building up its watch manufacturing prowess. Designed by a team led by Carole Forestier, then head of development at Cartier but now in the same role at parent company Richemont’s consolidated movement department, the 1904 MC is a solid, workhorse movement designed to be a upmarket replacement for the ETA 2892. Robustly built and found in watches like the Tank MC, the movement has double barrels as well as an efficient “Magic Rotor” winding mechanism. But the movement was significantly dressed up for its Vacheron Constantin duty as the cal. 1326, most obviously with a 22k red gold rotor bearing an open-worked Maltese cross. Notably, the edges of the Maltese cross are bevelled by hand, and form one of the most labour intensive and expensive operations of the movement production.

At the same time, the bridges were also reshaped to give them more curved and elegant shapes. The result is a properly upscale looking movement.

The components for the cal. 1326 are produced by ValFleurier, the secretive movement manufacturer owned by Richemont that produces parts and whole movements for many of the group’s brands. Assembly and finishing is then done by Vacheron Constantin, which means the movement is significantly more attractive than any other version of the same calibre. Both the Cartier and Piaget (found inside the Polo S) versions of the movement are less elaborately decorated.

While the movement is as attractively finished as with other watches in the price segment, it is necessarily not decorated to the same degree as the in-house calibres. The differences are mostly minor, like the tumble polishing of the pallet fork bridge and wheels for instance. The anglage on the bridge is done via CNC machining, and not polished subsequently, leaving faint machining marks. That being said, the FiftySix Self-Winding as a whole is well executed for what it costs. Whether or not an affordably put together watch like this furthers Vacheron Constantin’s brand equity is a question that is important but impossible to answer before some time has passed.

Available at Vacheron Constantin boutiques and retailers in September 2018, the FiftySix is priced as follows in US and Singapore dollars.