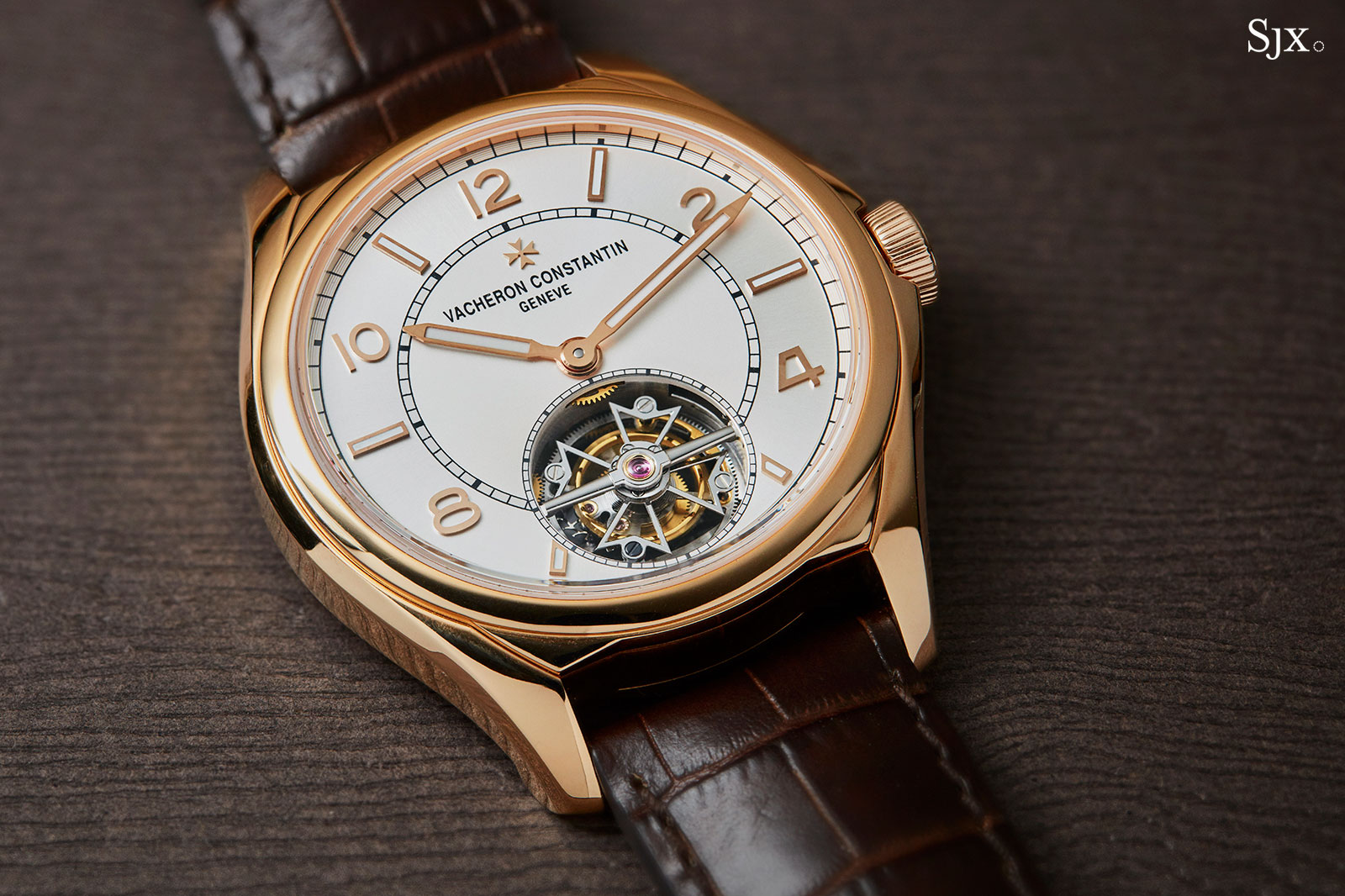 Launched earlier this year, the FiftySix is a collection conceived to a modern and generally more affordable than the average Vacheron Constantin wristwatch. The most complicated watch in the line-up was a triple calendar, but that title now passes to the FiftySix Tourbillon, a slim wristwatch with an unusual peripheral winding movement that’s now the most affordable tourbillon in the Vacheron Constantin catalogue.

The FiftySix Tourbillon is a handsome watch. Though it shares the exact same styling as the rest of the FiftySix line – with distinctive lugs modelled on the the ref. 6073 of 1956 – it feels a cut above, mainly because of the visible tourbillon regulator. At 41mm diameter and 10.9mm high it has more elegant proportions than the other watches, which are all 40mm wide and slightly thicker. Because of its thinness relative to its largish diameter, the case feels elegantly sized. The reason for the watch being thinner and wider is the movement construction. The cal. 2160 is a recently developed in-house movement – which made its debut in the Traditionelle Tourbillon launched at SIHH 2018 – combining the brand’s signature Maltese cross tourbillon regulator with a peripheral winding mechanism.

Introduced in the late 1960s, most notably by Patek Philippe, peripheral winding relies on a narrow, semicircular rotor that sits around the movement, rather than on top as is convention. It has the advantage of allowing the movement to be slimmer, essentially the same height as a hand-wound movement, with only a modest increase in diameter.

The downside of the mechanism in its early days was its inefficient winding and unreliability, which is why it disappeared in the 1980s. With improvements in manufacturing technology and construction peripheral winding made it comeback in 2008 when Carl F. Bucherer unveiled its first in-house movement. Several brands followed suit, including Vacheron Constantin with the magnificent cal. 3500 in the Harmony Ultra-Thin Grande Complication Chronograph of 2015.

The peripheral winding mechanism in the new tourbillon is based on that in the cal. 3500. It relies on a 22k gold rotor mounted on a large wheel that surrounds the movement. The wheel meshes with a winding wheel to wind the barrel. The bridges are open-worked to reveal the winding mechanism, which is a Magic Lever type bidirectional set-up. It’s the same mechanism found in the cal. 3500, except there it was hidden behind the bridges. Originally invented by Seiko in 1959, the Magic Lever has become popular in modern day movements thanks to its robustness and simplicity. Explains Christian Selmoni, Vacheron Constantin’s Style and Heritage Director, “We have introduced the Magic Lever in our calibre 3500, also in conjunction with a peripheral rotor, and the feedback on the system has been very good, both from the reliability results and regularity of  performance.” “Such systems are simpler than other solution that might be found in other Vacheron Constantin calibres, however they offer us an advantage in terms of thickness,” he adds.

“As we wanted our new automatic tourbillon caliber 2160 to be implemented in elegant timepieces – so it had to be a thin movement – this height advantage made really sense for us, in addition to the proven reliability of the Magic Lever itself.” The result is a movment that is just 5.65mm high, making it one of the slimmest tourbillon movements on the market. And it still boasts an 80-hour power reserve, or just over three days.

The respectable power reserve is in part due to a tourbillon carriage that’s slightly smaller than other Vacheron Constantin tourbillons, and the fact that the balance oscillates at a slow 18,000 beats per hour (2.5Hz), instead of the usual 21,600bph (3Hz) of most tourbillons.

Besides slimness, the other advantage of the peripheral winding is visual – the entirety of the movement can be admired, unlike in a traditional automatic which has a rotor obscuring half.

Though this is the simplest tourbillon Vacheron Constantin now offers, the movement is visually appealing and well decorated. Reminiscent of classical 20thcentury watch movements, the bridges have flowing, curved outlines. The bridges are naturally finished with Geneva stripes, and polished, bevelled edges. Notably, the tourbillon bridge has two inward angles, albeit gentle ones, plus another on the bridge for the winding mechanism. The tourbillon regulator itself is similar well decorated, in the typical manner of Vacheron Constantin tourbillons, though the carriage and bridge are slightly smaller.

The bridge is steel, with rounded and polished arms. Similarly, the Maltese cross cage is black polished on the top surface, and bevelled on its edges. While the tourbillon is the centrepiece, the rest of the dial identical to the other FiftySix models. It’s simple in design but well executed.

The surface is entirely silver but has three surface finishes that give each section different shades: concentric guilloche on the outer minute track, radial brushing on the chapter ring for the hours, and a grained finish in the centre. And the hour markers, both baton and Arabics, are solid 18k pink gold appliqués. Though it’s powered by the same calibre, the FiftySix Tourbillon costs about 10% less than the equivalent Traditionelle.