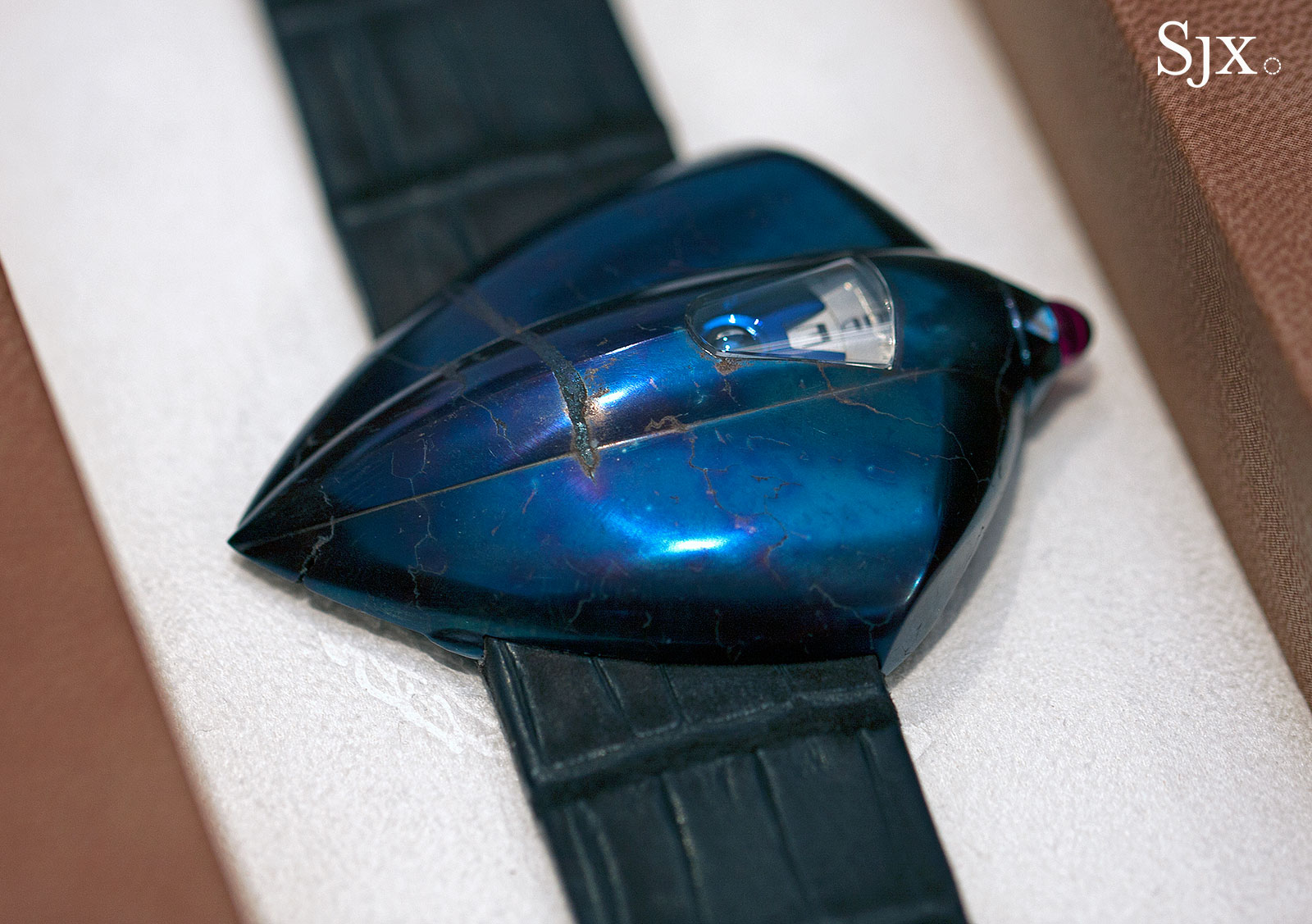 A wristwatch that is out of this world – literally – the De Bethune Dream Watch 5 Meteorite both awesome and shocking. Awesome, because the wondrously blue watch case is remarkably fluid in form but milled from a meteorite, while containing a cutting edge movement with a tourbillon regulator. And it is shocking because the Dream Watch 5 costs almost half a million dollars.

A one of a kind creation dreamed up by De Bethune co-founder David Zanetta, the Dream Watch 5 Meteorite is based on the first seashell-shaped Dream Watch, which was made of polished titanium but small in size. The latest Dream Watch is larger, measuring just under 50mm wide from tip to tip, and 39mm from top to bottom, but not overly so. In fact it feels rather compact on the wrist, helped by the sleekness of the case. From heaven to wrist

The case material originates in Campo del Cielo, located northern Argentina. Translating as “Field of Heaven”, Campo del Cielo is a massive crater field that’s the result of a meteorite that impacted some four or five millennia ago. The largest meteorite ever found on Earth – it weight 600 tonnes before entering Earth’s atmosphere – Campo del Cielo was discovered in 1576. Since then some 100 tonnes of meteorite has been recovered, including a 3kg lump that was used for the Dream Watch 5 case.

Composed mainly of iron, with small amounts of nickel, cobalt and other metals, the chunk of Campo del Cielo was machined into the case and case back, and mirror polished by hand. Then the case was heat treated to achieve the striking blue that’s typical of many De Bethune watches. Because the meteorite material is a non-homogenous, the colour of the case is shaded as various metals react different to heat treatment. The nuances continue with the fissures that interrupt the smooth surface of the case, contrasting with its sleek, rounded form. The crown is topped by a large, one-carat ruby cabochon, a lavish design accent in itself. But the red stone has been drilled out to accommodate a diamond inside for that extra bit of sparkle. This sort of detail that is hard to see and expensive to execute is typical of De Bethune, being both inexplicable and admirable. The Dream Watch 5 tells the time with a pair of discs, a jumping hours and sweep minutes. Small and somewhat hard to read – but in a watch this fancy who cares? – they sit beside a blued titanium frame that contains the spherical moon phase display that’s a De Bethune trademark. The sphere is made of palladium and blued steel, each forming half the orb and pressed together. And like the time, the moon sphere is small enough that it’s impossible to make out the exact phase of the moon. De Bethune is responsible for some of the most high-tech mechanical movements on the market, and the Dream Watch 5 is no exception, though the DB2144 inside is an existing one. Hand-wound with a lengthy six day power reserve, the calibre DB2144 is almost identical to the that in the DB28 Digitale, except the Dream Watch is also equipped with a high-speed, high-frequency tourbillon regulator that visible through a porthole on the back (the same tourbillon that’s found in several other De Bethune wristwatches, including the DB25T Zodiac). The liberal use of silicon is intended to improve timekeeping since the material is light, nearly friction-free and manufactured to extremely fine tolerances. In fact, De Bethune is the only small scale independent watchmaker – the annual output is just 200 watches or so – that uses silicon so widely in its movements. That is not cost effective since silicon components are only economical on a large scale due to the high-tech etching process required to make them.

A tremendous amount of effort and thought has been put into conceiving the Dream Watch 5, from the meteorite case to the movement inside, that much is obvious. And relative to the competition De Bethune is still making some of the most ambitious, unusual and imaginative mechanical watches on the market. But the Dream Watch 5 is still a whopper, priced at SFr450,000 before taxes, equivalent to US$459,000. 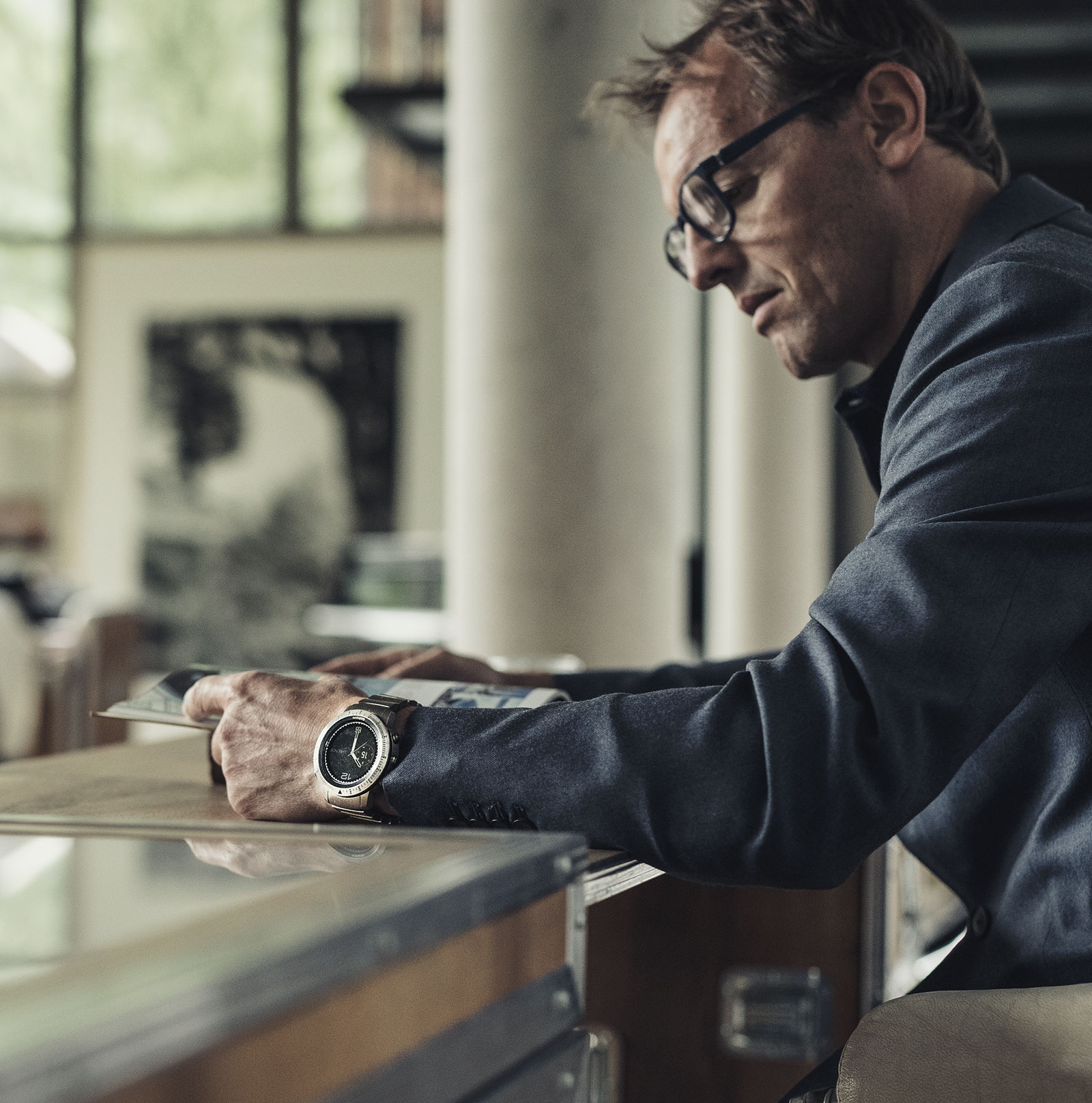 Best known for its GPS devices, Garmin’s latest “multisport” smartwatch aims to look more like a conventional timepiece. The Fenix Chronos does way with the usual rubber and plastic of smartwatches, and is instead cased in steel or titanium, with matching bracelets.

While traditional watchmakers are trying, somewhat clumsily, to hop on the wearables bandwagon, electronics firms like Garmin are diversifying into smartwatches that look less and less like small computers. And above them all towers the Apple Watch, will which go into its second generation in September 2016, and probably still look like an Apple Watch. Unlike smartwatches from Apple and Samsung, the Garmin Fenix Chronos has a distinctive fitness and outdoors slant. The Fenix Chronos, or “fēnix® Chronos” in Garmin-speak, is essentially an upgraded version of the basic Fenix 3 fitness smartwatch.

It’s a large watch, measuring 51mm in diameter and 16mm high. Besides the steel or titanium for the case and bracelet, the Fenix Chronos also features a sapphire crystal. External parts aside, the Fenix Chronos is functionally similar to the basic models, with a long list of bells and whistles expected for a watch like this. They include GPS navigation, barometer, heart rate monitor, as well as smartwatch functions like email and text notifications, but also functions for specific sports like cycling, running, golfing and swimming – even a hunting and fishing calendar.

Compatible with both iOs and Android, the fully charged Fenix Chronos will run a week in smartwatch mode, 25 hours in UltraTac battery saver mode, and 13 hours in GPS navigation mode. It’s water-resistant to 100m. The Fenix Chronos is available in titanium with a titanium bracelet that is unusually constructed, being an elastomer strap with individual titanium links attached on top. And it’s also available in 316L stainless steel – the same grade of steel used for most pricey watches – with either a leather strap or steel link bracelet. All versions are also accompanied by a silicone strap that is easily swapped.

Because of the alloys used, the Fenix Chronos weighs as much as a conventional timepiece, with the steel bracelet version weighing 186g or 6.56oz.